Canned corn makes a great side around the holidays, but yours always ends up turning brown when you can it. How do you prevent this from happening? We did the research to bring you the answer.

To keep corn from turning brown when canning, watch your pressure when canning, only can mature corn kernels, and reduce the sugar in the corn. If your corn has turned brown, it’s usually still safe to eat, even if it doesn’t look as appealing.

In this guide, we’ll delve deeper into why canned corn turns brown and how to prevent it so you can serve photo-worthy sides at every big family meal! 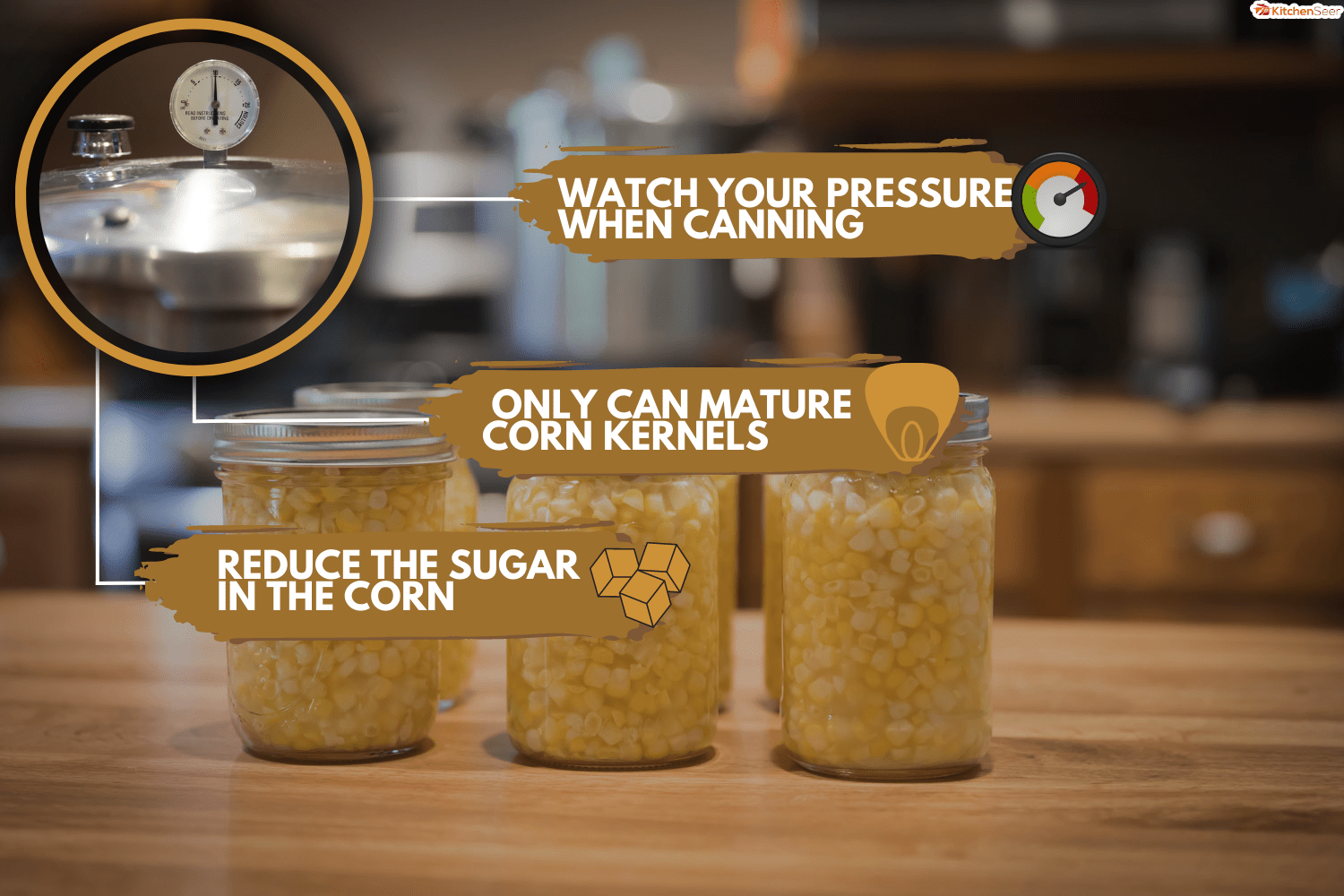 Why Does Corn Turn Brown During Canning?

Before we can talk about how to prevent corn from browning, you need to understand why it’s happening in the first place. So what causes previously yellow corn to turn brown? Let’s take a look! 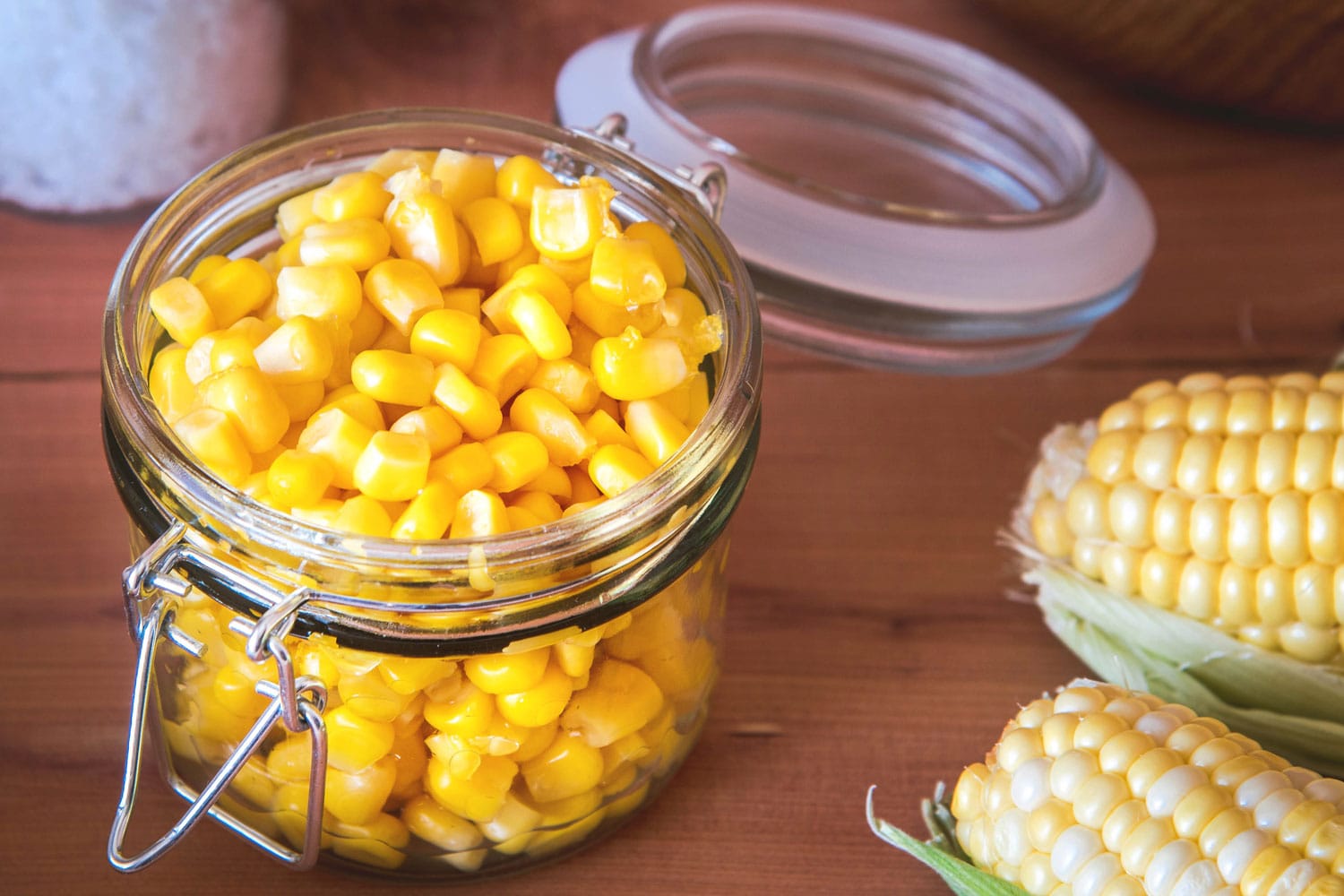 Corn has a naturally sweet taste that perfectly complements the salty buttery flavor of the dish when prepared. However, the sweetness of corn can be a double-edged sword. As yummy as it is, it’s the chief reason why corn becomes brown when you can it.

What’s technically happening is caramelization. Caramelization occurs when sugar oxidizes. In some instances, you want to caramelize ingredients when cooking, but in the case of canning corn, you don’t.

The trademark brown hue is a clear-cut sign that the sugars in the corn are too high and that the hot temperature of the pressure canner is causing it to caramelize.

You’re Using the Pressure Canner at Too High a Temperature

If you’re new to canning, you might assume the pressure canner needs to be cranked up to 11 to effectively can corn, but that’s not necessarily the case. As mentioned, this could be what kickstarts the caramelization process!

How to Keep Corn from Browning When Canning 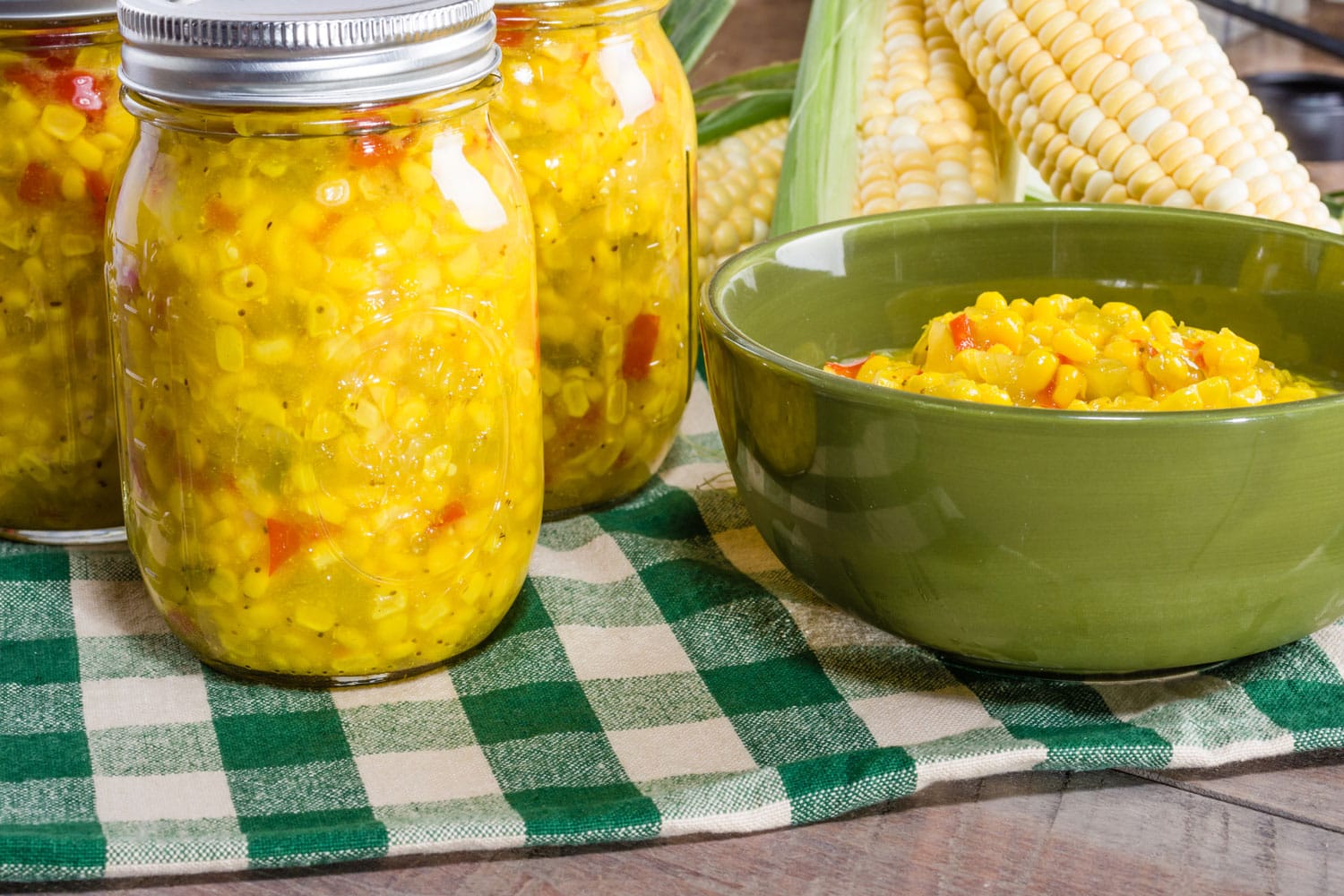 Now that you understand better the mistakes you could be making when canning corn, let’s explain how to rectify these issues so browning is less likely to occur.

Reduce the Sugar in Corn

While the United States produces a variety of different corn types, the one that’s the most widely eaten is sweet corn. Other types of corn such as flint corn and dent corn feature naturally hard kernels.

Dent corn is typically used as animal feed, although the multicolored flint corn can go into grits, polenta, hominy, corn flour, and cornmeal.

Since the only type of corn you’re going to find on grocery store shelves and in farmers’ markets is sweet corn and because you have no way of knowing just how sugary sweet corn is going to be, you’ll have to reduce its sugar content.

How in the world do you do that, you ask? When the corn is still in the husk, you should let it warm up to room temperature. Give the corn some time in its warm environment, but not so long that the corn will dry out.

What’s happening as the corn sits? The warming process converts the sugars into starches. The corn will have less sugar than sweet corn that isn’t warmed. Do keep in mind that the corn won’t taste as sweet either.

Only Can Mature Corn Kernels

Another reason that corn kernels can turn brown when you can them is that they have yet to fully mature. Since these kernels are smaller than fully mature kernels, it doesn’t take as much heat exposure for them to caramelize.

If you see smaller kernels than usual, set those aside and use them for something else besides canning.

Should You Blanch Corn Before Canning It? 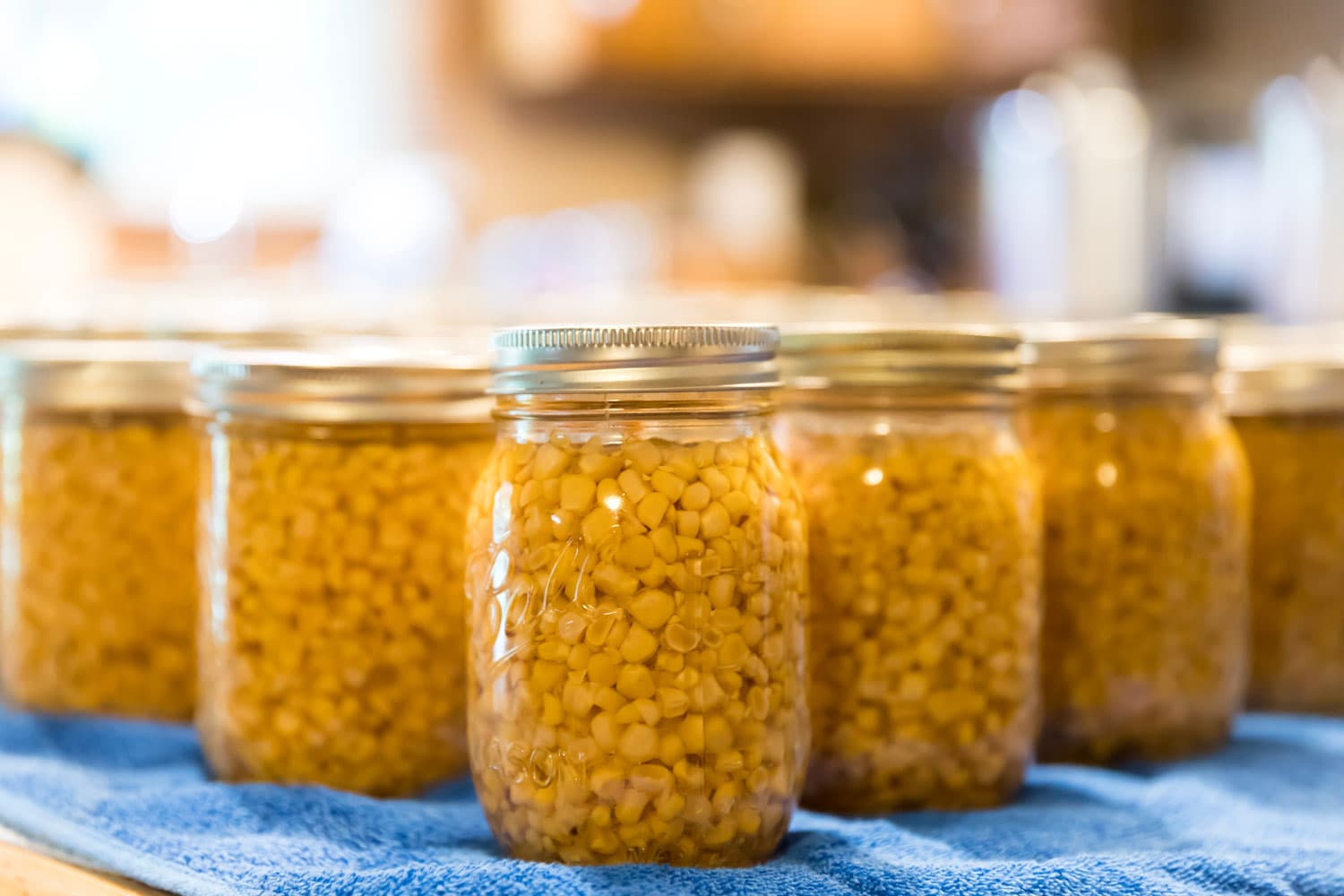 As you begin canning corn, one of the questions that will inevitably come up is whether to blanch or not to blanch.

Blanching refers to the process of scalding a vegetable like corn (or other foods as well) in boiling water, allowing a specific interval to pass, and then running the corn under cold water or placing it in an ice bath.

The purpose of blanching is to preserve food quality, so is it worth blanching corn before you can it?

Not really, no! The very process of canning itself will preserve corn (we’ll talk about for how long in a later section, so make sure you check that out!), which makes blanching redundant.

That said, some people who can corn prefer to blanch the whole corn ears before canning because the kernels are said to come off the cob easier. Supposedly, blanching enhances the flavor as well.

Since you’re blanching whole ears of corn, you need a huge pot of water for boiling and an equally sizable ice bath. Your sink can even double as an ice bath if you clean it and then close the plunger.

Insert the ears one at a time into the boiling water, allowing them to boil for up to three minutes. To prevent burning yourself, use tongs to put the corn in the boiling water and then remove the corn when the time comes.

3. Put the Corn in the Ice Bath

As soon as the ears of corn are out, transfer them to the ice bath. Give the corn some time to cool and then remove the kernels.

You hadn’t realized that your pressure canner would caramelize the corn, but that’s exactly what’s happened. The corn looks edible enough, but it’s very much brown. Can you still eat the brown corn or serve it to your family?

If the corn is only brown because it caramelized in a pressure canner, then yes, it’s perfectly safe to eat. Beware of any corn that’s mushy or slimy, especially if the corn also has a moldy stench or is giving off a rancid odor. In those instances, the corn has gone bad and should not be ingested.

You’ll be able to tell the difference between purely brown corn and that which has gone moldy or rancid—trust us!

How Long Is Homemade Canned Corn Good for? 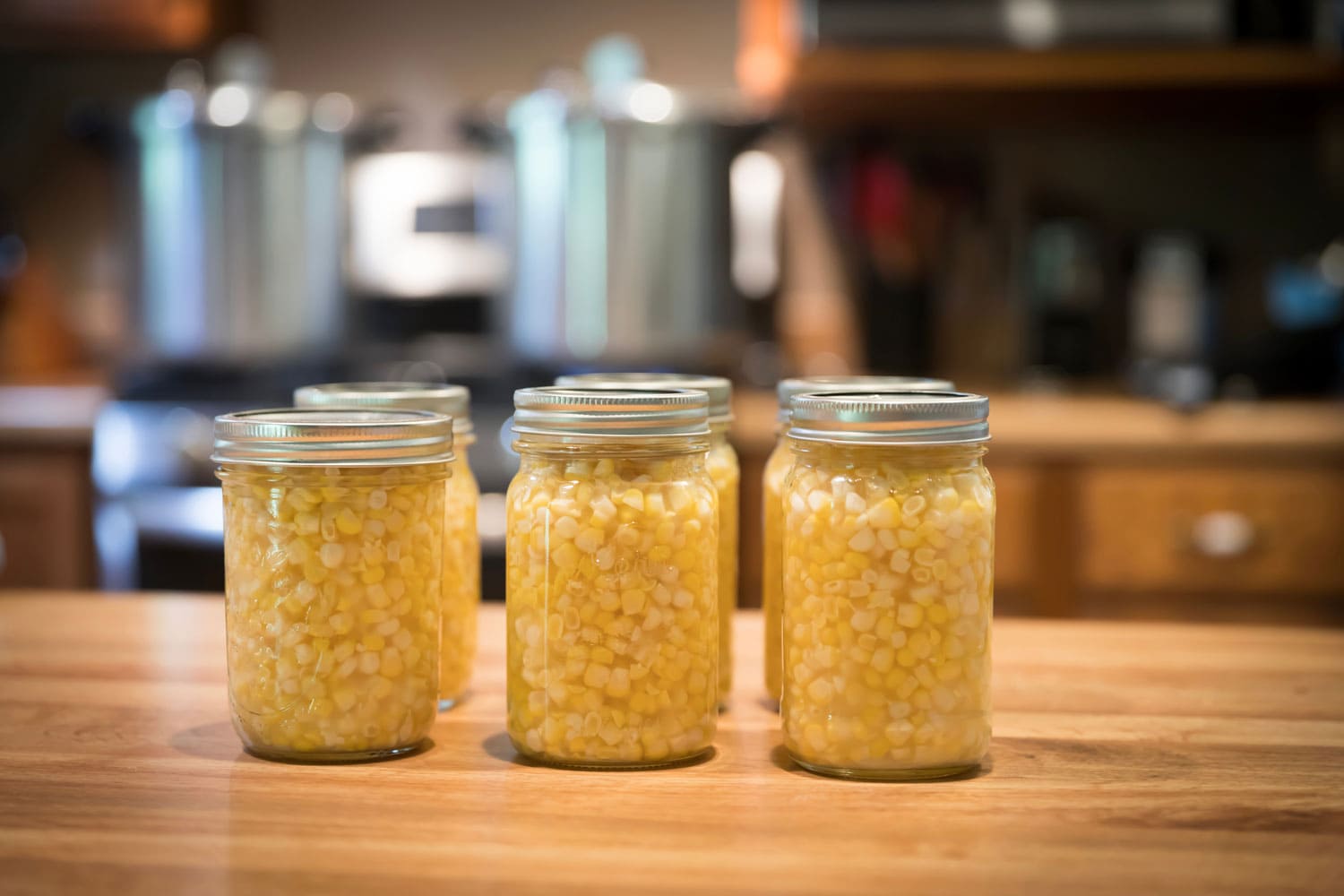 We mentioned before that canning corn can preserve its shelf life, but exactly how long will canned corn last?

Canned foods are generally good for a year on the shelves and should be eaten within two years. Canned corn in particular is good for three to five years.

To help you keep track of the age of your canned corn, make sure that you label the container or the lid, writing down the date of canning in clear, legible letters. Since corn can last for years, add the year you canned the corn as well!

When the time finally comes for you to crack into that jar of sweet canned corn, do be sure to check for the above signs that the corn has gone bad. You might even spot visible mold on the corn, which is a clear-cut indicator that the corn is past its prime!

Canned corn turns brown due to caramelization that’s usually caused by too much sugar in the corn but could also be due to canning immature kernels or increasing the canning pressure too much.

Now that you understand why canned corn turns brown, you can prevent it going forward!

If you enjoyed this article, don’t miss this other great content:

How Long Does Corn Last in the Freezer?

Can I Use a Meat Grinder to Grind Grains [Inc. Corn] – And How To?

How To Store Leftover French Fries

How Far In Advance Can I Make Mashed Potatoes?

Can You Vacuum Seal Corn On The Cob? [And How To]