When it's your first time preparing pizza, there's a lot you have to learn. More specifically, how hot should a pizza oven be before you put a pizza inside? If you don't get it right, your pizza could come out undercooked! Without further ado, let's find out how hot it should be and more!

The oven temperature is one of the crucial aspects of making the perfect pizza. Your cheese or crust might not bake to the right consistency without using the correct amount of heat. Likewise, if it's too hot, you risk burning the crust. How hot the oven is should depend on the type of pizza you're making. The recommended temperatures are as follows:

There's still more you might want to know about pizza oven temperature. Of course, since it's not common for many to own one, there's still a bit of a learning curve to it. For your first use, you might have more questions on how it should operate. If you'd like to cover more details, keep reading ahead. 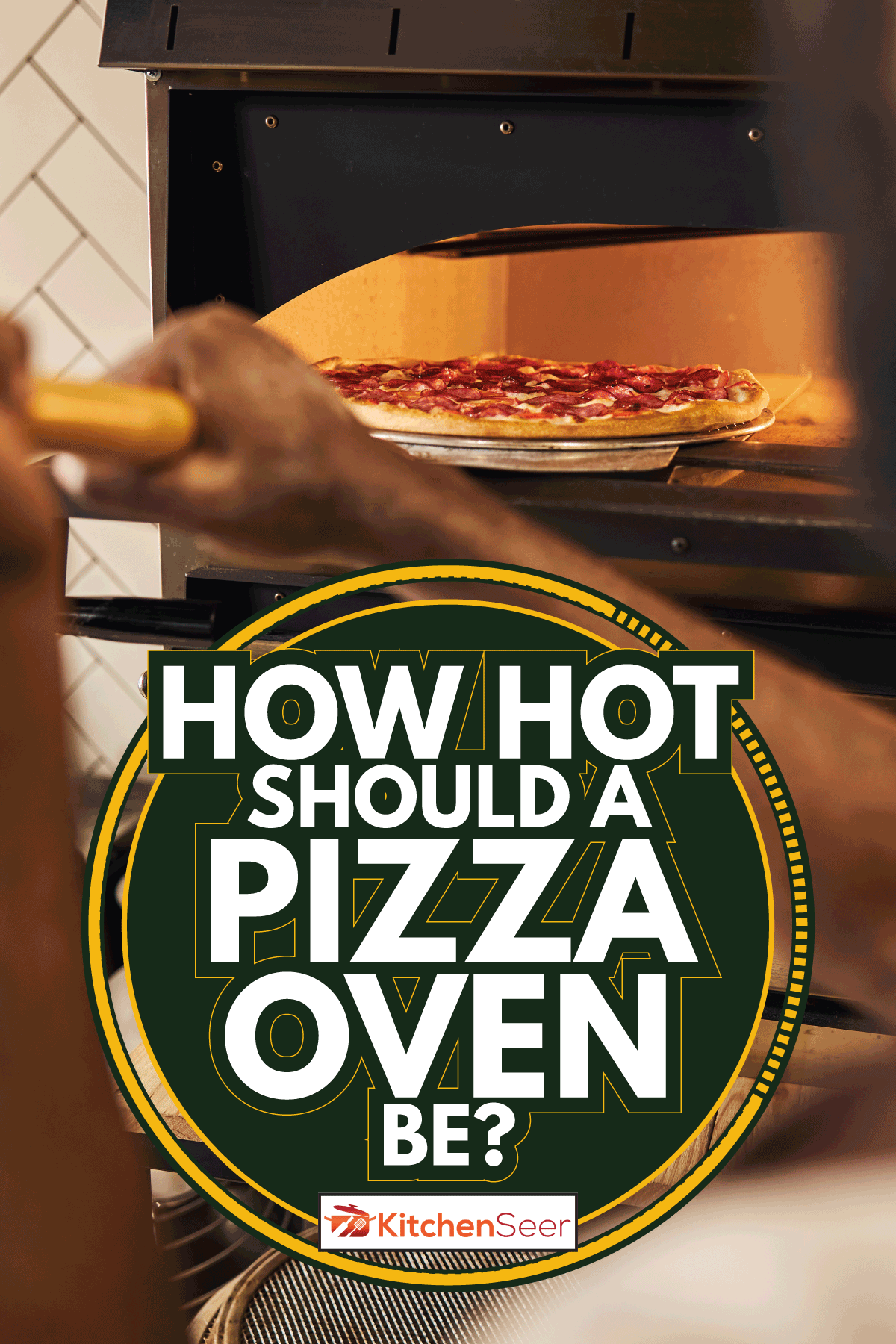 Why Oven Temperature Matters for Pizza

First, let's go over why heat is an essential part of cooking pizza. It's a simple concept of heat cooking the dish to fullness. But, for pizzas, the higher the temperature - the better.

When you step foot in a pizzeria, you'll find that you can sometimes feel the heat coming from the oven. That's because commercial pizza ovens can get as hot as 700-900 degrees Fahrenheit. The temperature you use will affect the texture of the crust. 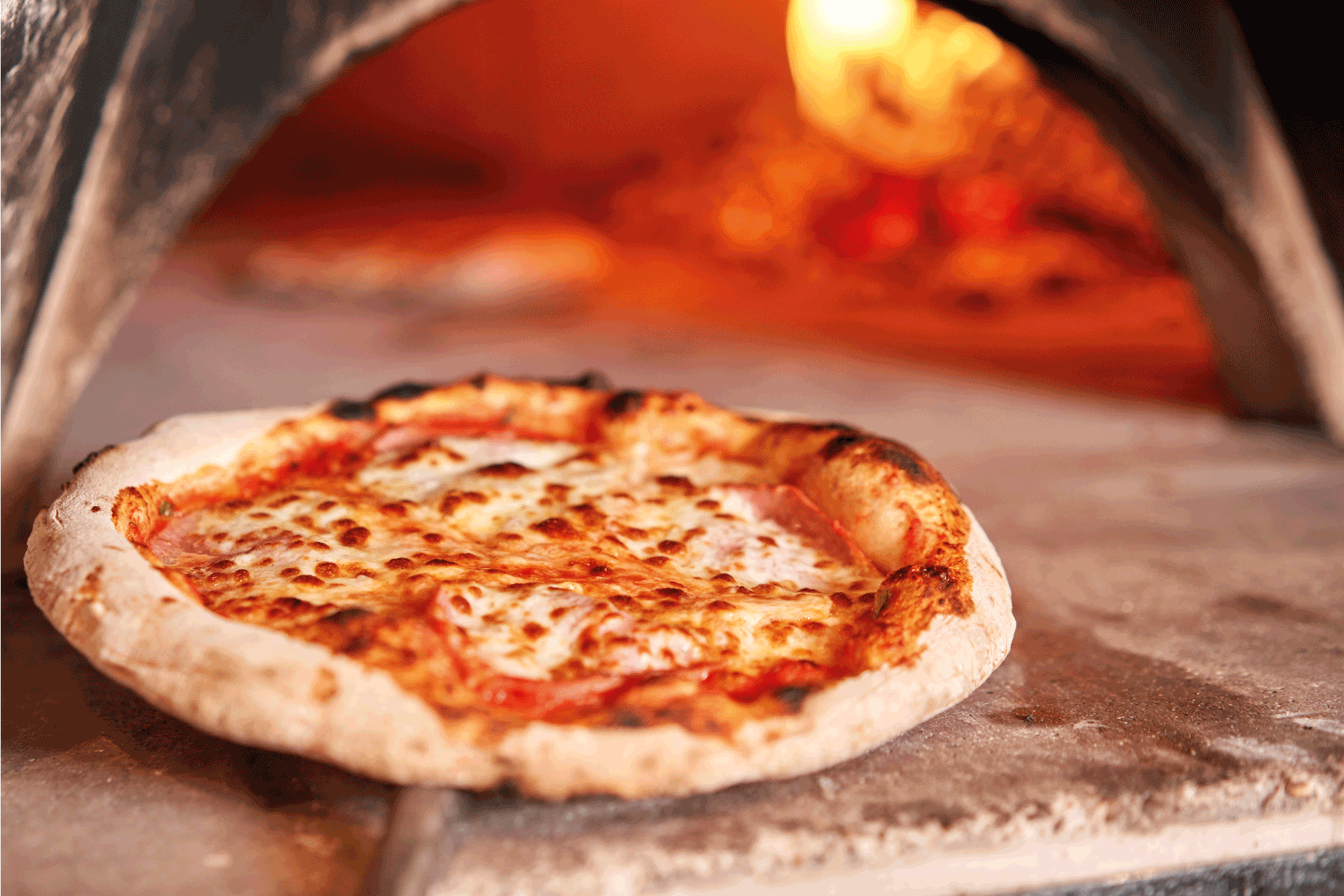 For example, Neapolitan-style pizza typically cooks at 700 degrees Fahrenheit or higher. A temperature this high causes the dough to puff quickly. On the interior, it gets soft and steamy.

On the other side, you have New York-style pizza. It typically cooks at around 600-700 degrees Fahrenheit. What you get is a flatter pizza with a chewier and breadier texture.

While both styles are delicious, you can tell the difference between the two. So, depending on the style you want, you should cook with higher or lower heat. However, you should avoid cooking at too low of a temperature. Or, it will come out soggy with the toppings undercooked.

How Hot Should the Oven Be? 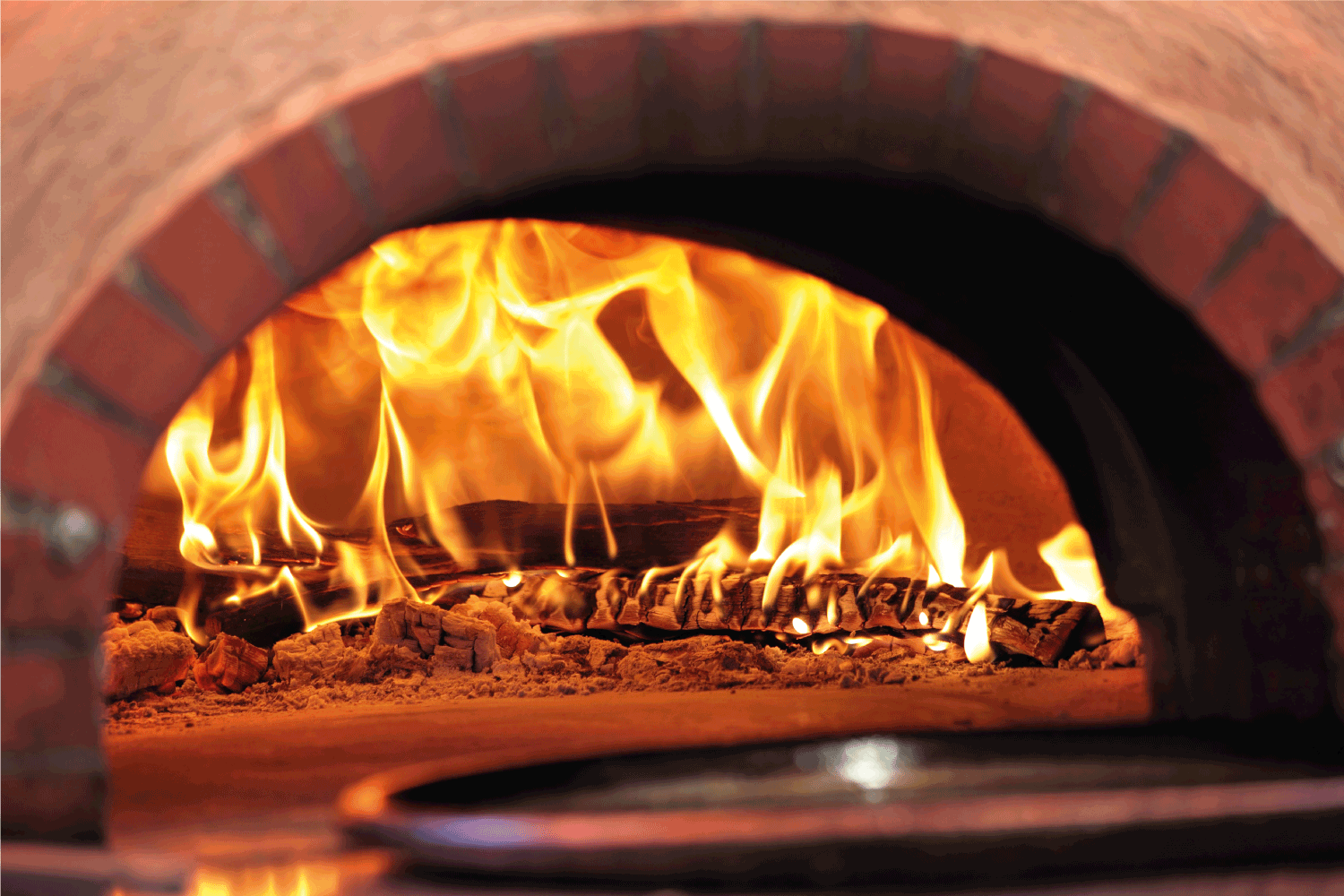 As previously mentioned, the temperature of the oven depends on various factors. The style of the pizza and even the toppings could influence your decision. In general, you want the pizza oven to hover somewhere between 650-900 degrees Fahrenheit.

However, that answer might be too vague for some. It begs the question, how do you determine what temperature works best for your situation? You'd have to ask yourself a couple of questions.

Are you going to go heavy on the toppings? What about the sauce? If you're going for a heavy sauce, you'll need to give it extra drying time. It's the same thought process when you're picking toppings. You want to give it enough time to cook thoroughly.

Now that we know what to consider when choosing the temperature, you'll need to know how to get it there and maintain it. After all, it isn't your average oven. You're starting the fire with wood instead of a turn of a knob.

As some suggest, you should start by aiming higher than your intended cooking temperature. For example, if you plan to maintain 750 degrees Fahrenheit, aim for 850 degrees Fahrenheit initially. At 850, let it burn for about 20 minutes before you begin cooking.

Temperatures play a role in the texture of a pizza. So, at 750 degrees Fahrenheit, you're going to get a crispy exterior with a fluffy interior. It will take around 90 seconds to cook the pizza.

If we go lower, say 650 degrees Fahrenheit, it will take around 4 minutes for the pizza to cook. Cooking at this temperature results in a dryer crust.

How Long Does It Take To Get a Pizza Oven Hot?

Operating a pizza oven is not as simple as putting wood in, and you're ready to go. On the contrary, you will have to wait for it to get hot. And, the type of oven you have matters.

In general, it can take anywhere from 1 up to 3 hours to get the oven hot enough. As some users suggest, it can take less time depending on how recently you've used it. It takes time for the pizza oven to cool down. So, if you've been practicing making pizzas, it will still be hot hours after you've finished using it.

From a cold starting point, it will tend to hover around the 2-3 hour range. If you're curious to what aspects influence the heating time, they are:

How Do I Know if My Pizza Oven Is Hot Enough? 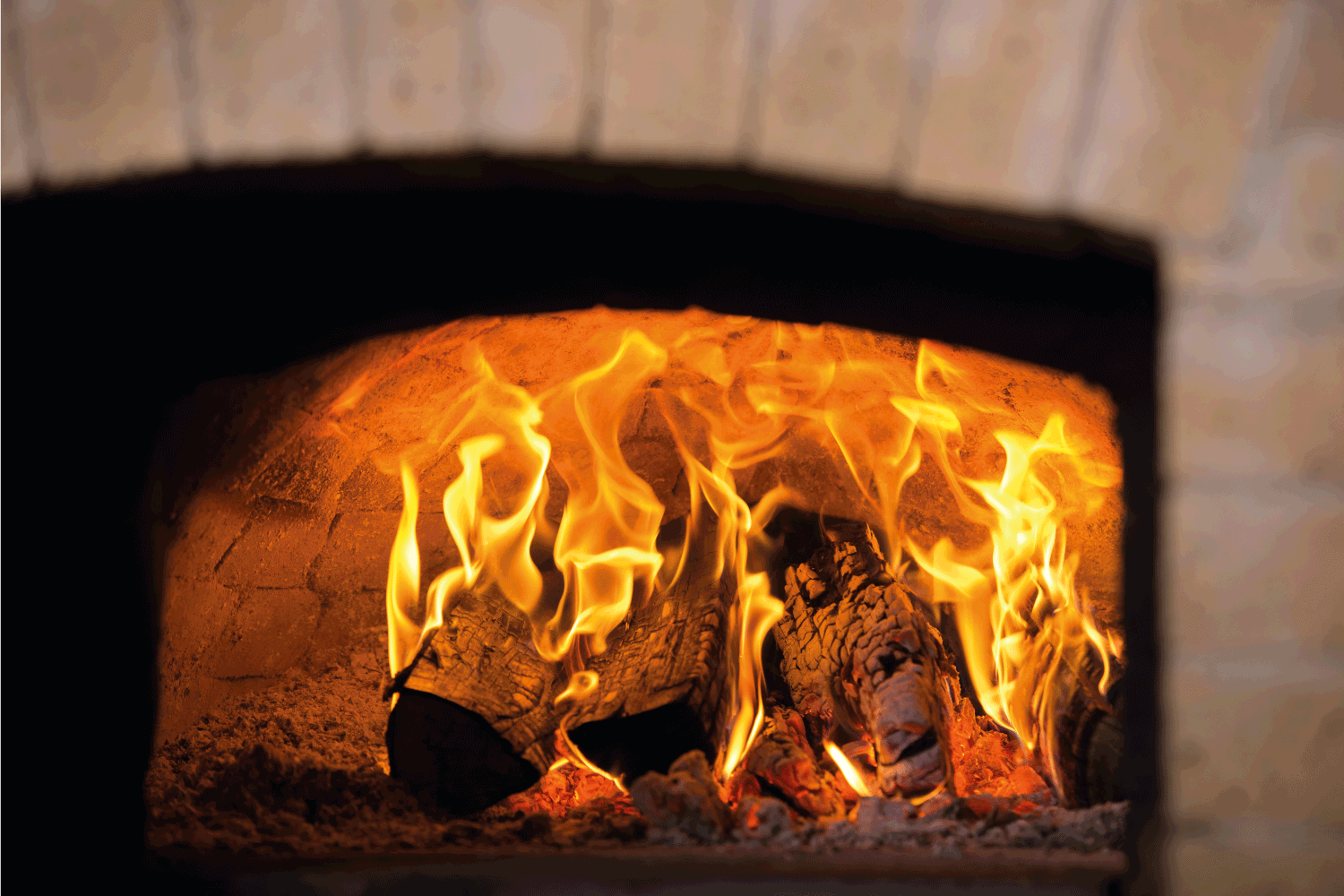 Yet, regulating the temperature is not enough when you're prepping a pizza oven to do your job. How can you tell when it's hot enough? Luckily, there are some tell-tale signs you can look out for.

The first is the surrounding area of the oven. When you're burning wood, the walls and ceiling will begin to look grayish. The gray color will develop through most of it. Once you notice 3/4 of the oven is gray, you can spread it on the bottom using an oven brush.

The walls, ceiling, and bottom should be near the same temperature. This way, you ensure that the pizza cooks evenly. When you see the walls and ceiling covered with ash, you'll know those areas are hot enough. However, the bottom is a different story.

You will need to test it. In that regard, you can use flour to test the waters. Take a handful of flour and place it inside the oven. If it burns immediately or catches fire after a short period, the bottom is too hot. Placing a pizza in these conditions will burn it.

Reducing the temperature has an easy fix. Use a shovel to remove some of the embers. Test the waters again by placing a handful of flour. If it turns brown within 10 seconds, it should be ready to go!

Do You Close the Door on a Pizza Oven? 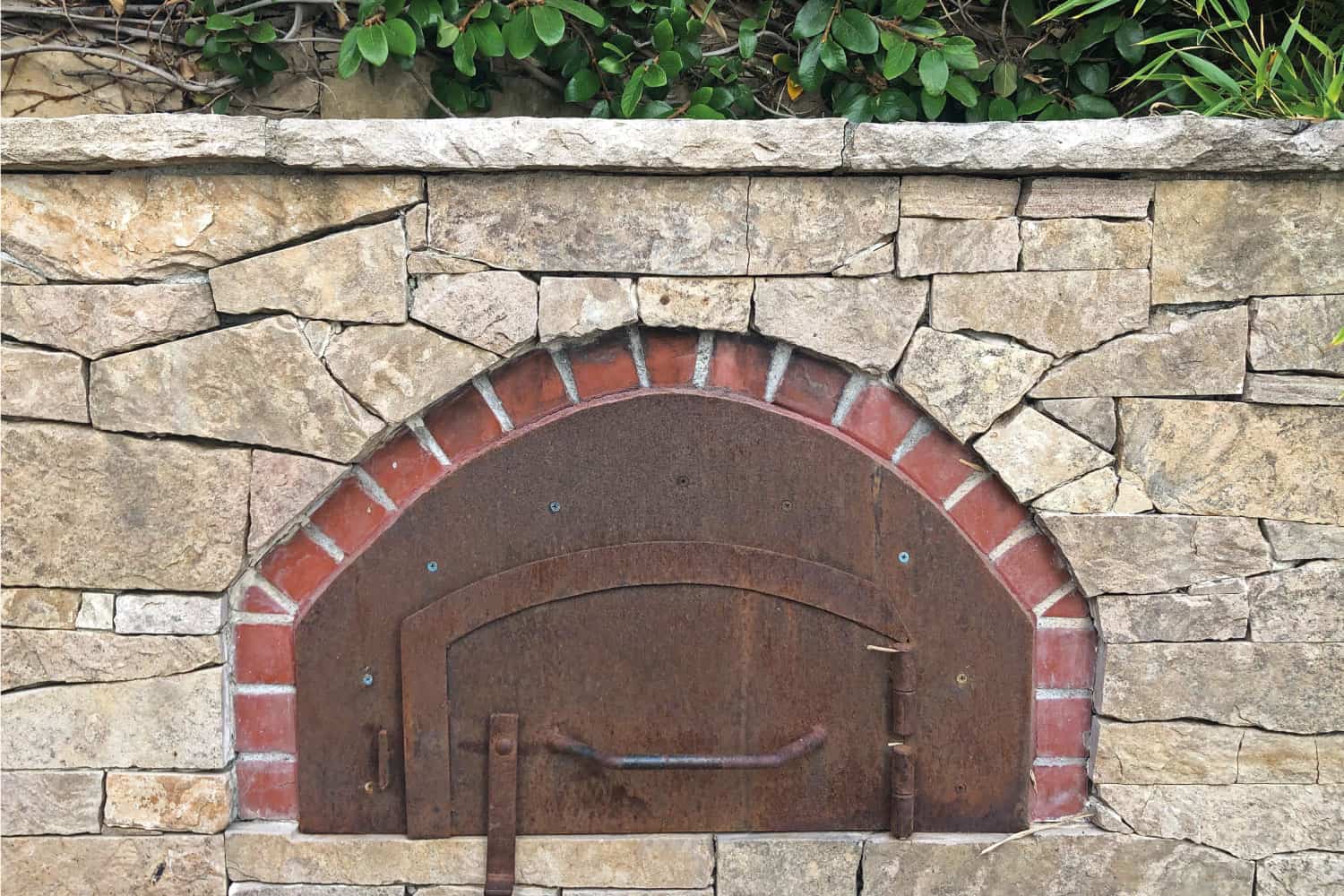 The door of a pizza oven works with the flames. As you might already know, fire needs oxygen to sustain itself. At the same time, you want to retain the heat. And, if you leave the door open, you're letting some of it escape. So, what's the best way to operate it?

Closing the door depends on user experience. Some suggest leaving it closed to allow the heat to distribute evenly. Others claim that you can leave it open if you burn the right type of wood and lots of it. Though, the consensus is to leave it closed to retain heat.

What Is the Best Temperature To Bake Pizza at Home? 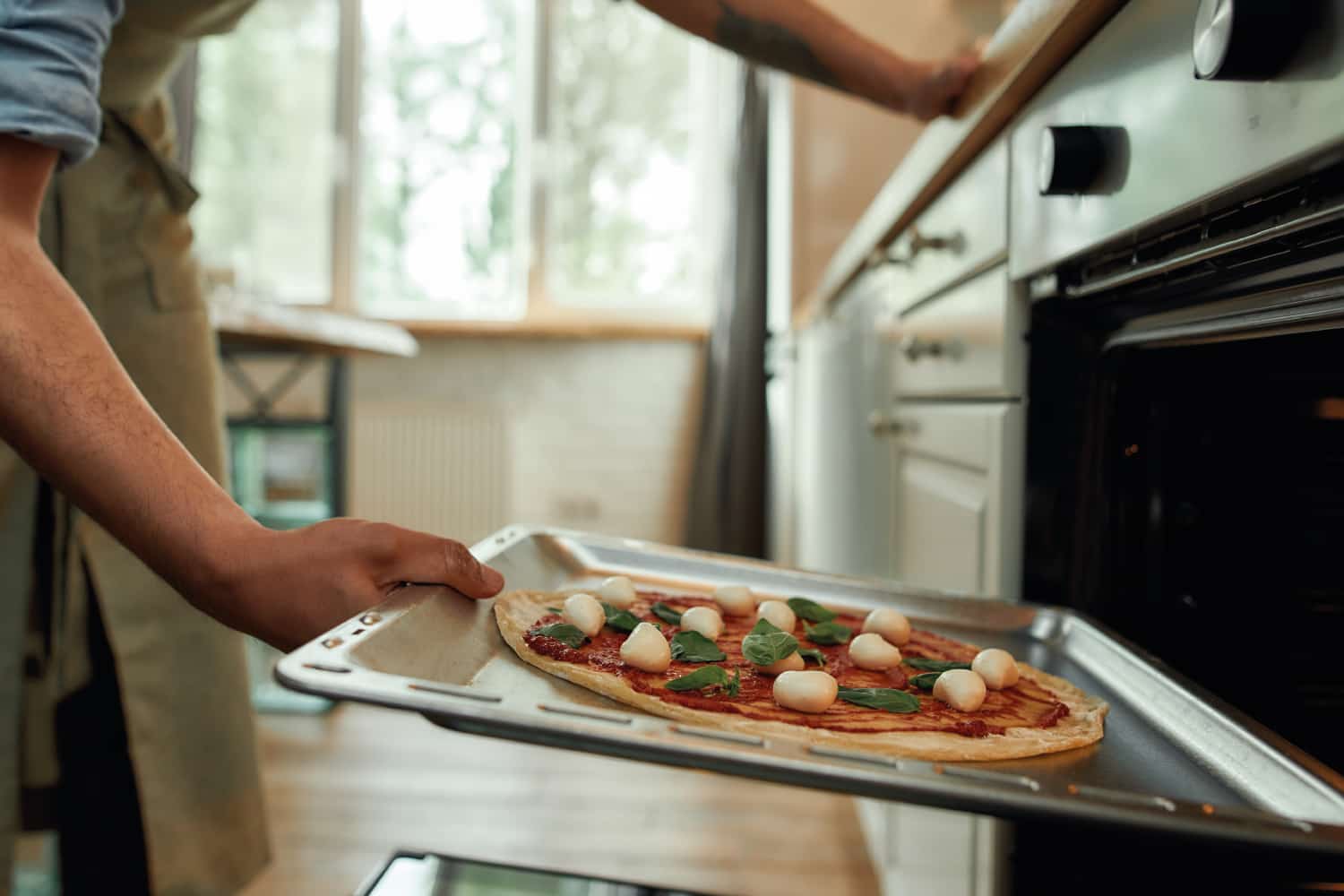 Cooking pizza at home is another story. Standard kitchen ovens will not get as hot as a wood-fired pizza oven. In general, most home ovens can get as hot as 500 degrees Fahrenheit. It's far from the ideal temperature. But it can work!

Not all the ovens are the same. So, if you can get anywhere from 400-500 degrees Fahrenheit, you're set to whip up a good pizza! Remember, the higher the temperature, the better.

Making a good pizza takes a lot of practice. If you've recently stepped up your game and decided to get a pizza oven, it can get confusing fast. The process to get it right will take some time. However, that time is well spent once the perfect pizza comes out of the oven!

We hope you found the information above helpful! Before you go, do you have other pizza concerns? Are you looking to up your homemade pizza game? You'd probably want to know the difference between a pizza stone and a pizza tray. To find out more, check out our post here.

Do you need tips on how to prevent it from sticking to the tray? We also cover that topic in detail. For more information, check out our post here. Until next time!

Yams Vs Sweet Potatoes: Can You Substitute One For The Other?

Almond Butter Not Getting Creamy – What To Do?