Some people think of pizza as thin crust vs. thick crust. If that's all you know, then you're really missing out. There's a wide variety of pizza styles! We've checked with pizza chefs to create a complete list of types of pizza.

Some of the most popular thin-crust pizzas include:

Some thick crust pies are:

In this article, we'll give you the background on each one. First, we'll explain where they originated. Then we'll cover how they're traditionally made. We'll also show how modern pizzas might differ. Finally, we'll give you some tips for each. Soon, you'll know the right crust and toppings for each. 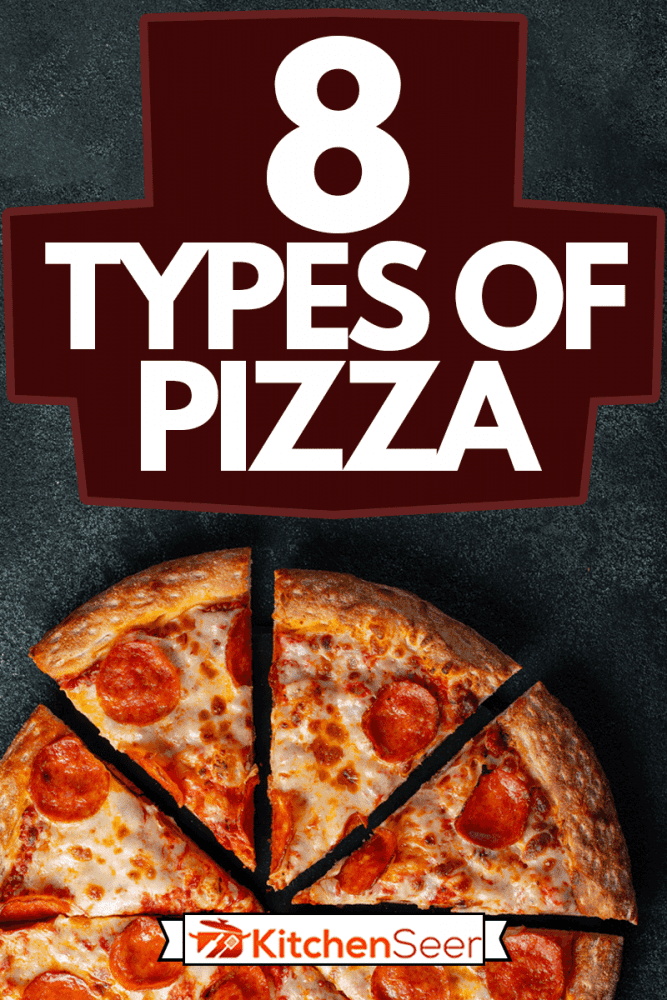 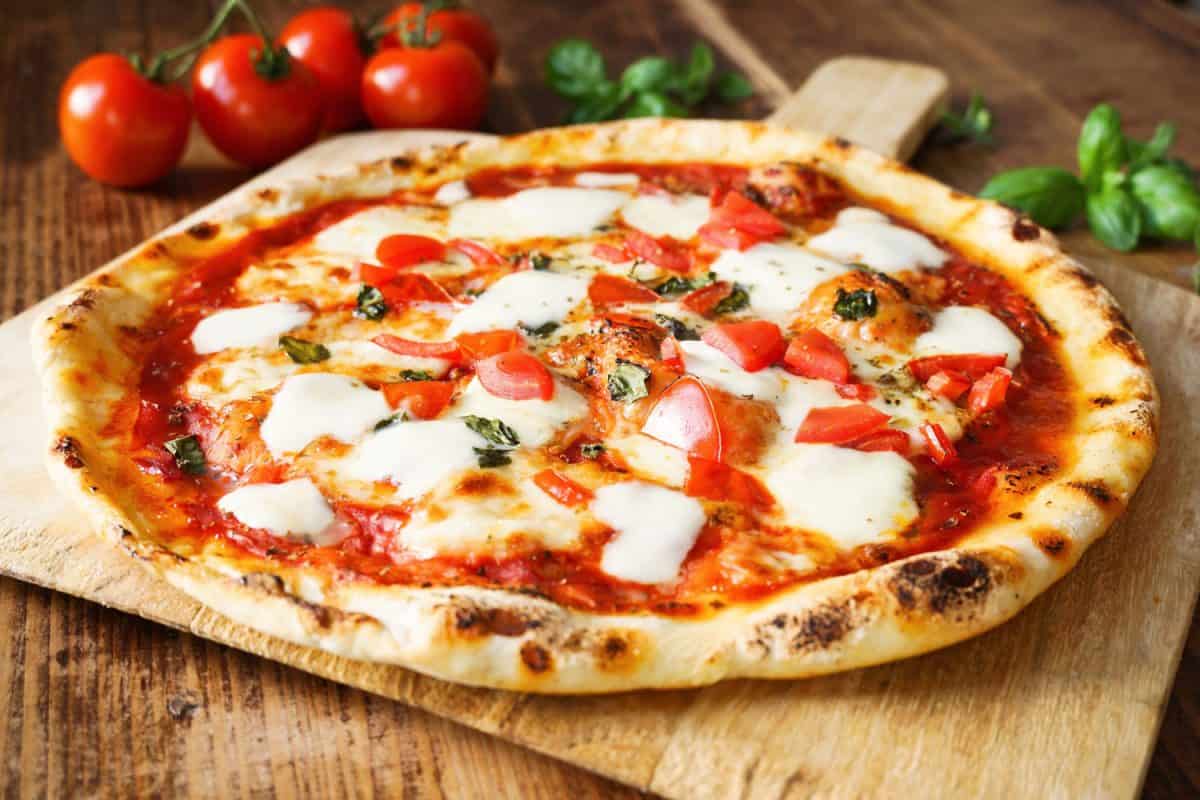 This is the original pizza. This classic style comes from Naples, Italy. The creation was popular as a cheap food option sold by street vendors.

This style of pizza is prepared on a very thin crust. It's too thin to hold, so it is often eaten with a fork and knife. The thin crust also means that it can't support much. Toppings are relatively light and simple.

Authentic Neapolitan pizza cooks in a wood-burning oven. Oven temperatures are 800 degrees or greater. Because of this, it only takes a minute or two to cook.

Similar to pizza Margherita. However, this one has different cheese, Campania mozzarella. This is also called Buffalo [or Bufala] mozzarella. 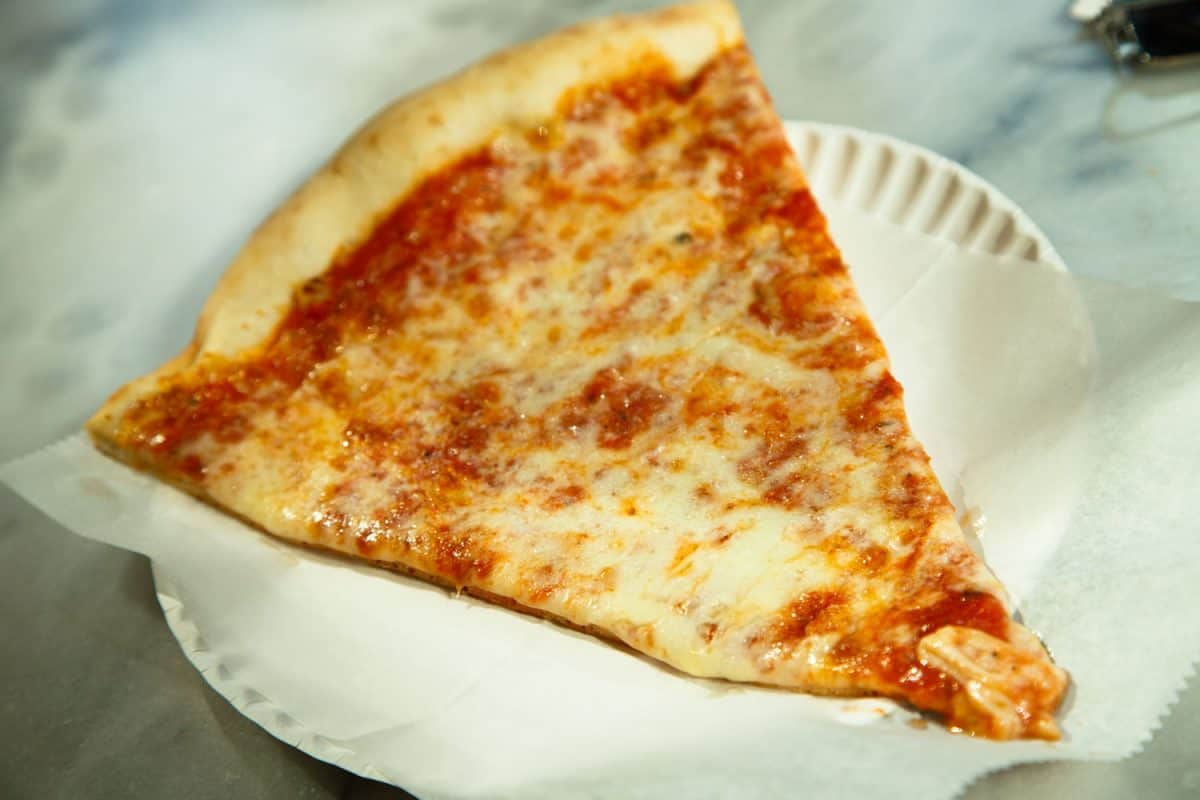 Earlier versions of New York pizza were similar to Neapolitan. However, it has evolved over time.

In many pizzerias, it's baked in a wood-burning oven. It also uses the same high-temperature method. It can also be made in a gas deck oven.

Compared to Neapolitan, it's not quite as thin. Because of this, it can be eaten by hand. The slices are also usually large. They're durable enough to fold over. Because the crust is a bit sturdier, it holds more.

This kind of pizza, subsequently, has more variety. However, there are still some favorites. 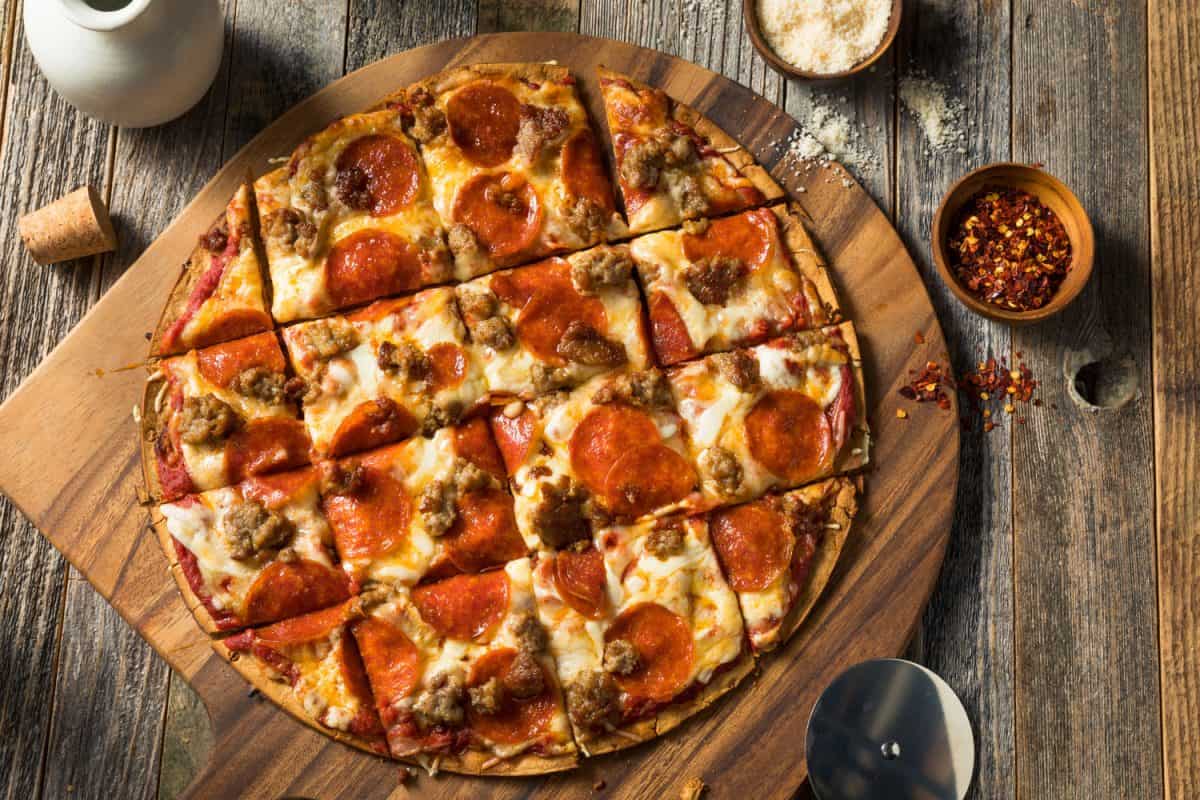 This uses a thin crust. Specifically, it's made without yeast. As a result, it comes out crispy and firm.

The crust is further described as "cracker-like." It cannot be folded easily. Compared to New York pizza, it's crunchy and doesn't fold.

The slices are also cut into squares. Sometimes, this is referred to as "tavern-style."

The sauce is heavy on oregano. It's also a bit sweeter than most pizza sauces.

The cheese is a blend of cheddar, swiss, and provolone. This is also known as Provel processed cheese.

Ingredients go on in a standard "sauce, cheese, topping" order. The crust is strong, although thin.

As a result, there's no need to skimp on toppings. Just watch out for anything that can make your pizza soggy. 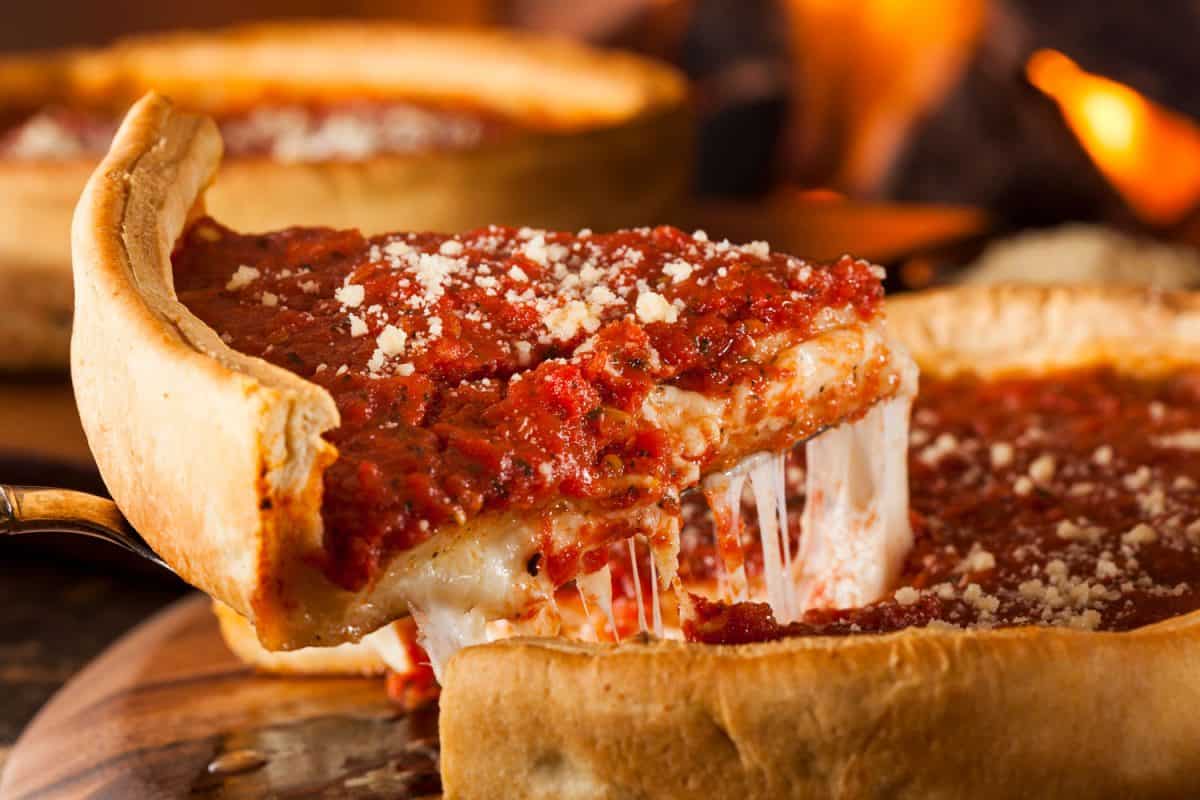 Chicago pizza is named for the city where it was initially invented. It's also known as deep-dish pizza.

Ike Sewell wanted to create a pizza like Neapolitan. But he wanted something a bit different. He decided against the thin crust. Instead, he made a thick crust with high raised edges. The crust is also very buttery. This is done by laminating the dough with butter.

Sewell also reversed the order of things. In his pizza, cheese goes first. Next comes any meat, and then vegetables. Finally, the tomato is the final layer. Traditionally this pizza uses canned crushed tomatoes.

This heavy-duty crust supports a range of toppings. However, it is usually eaten using a fork. 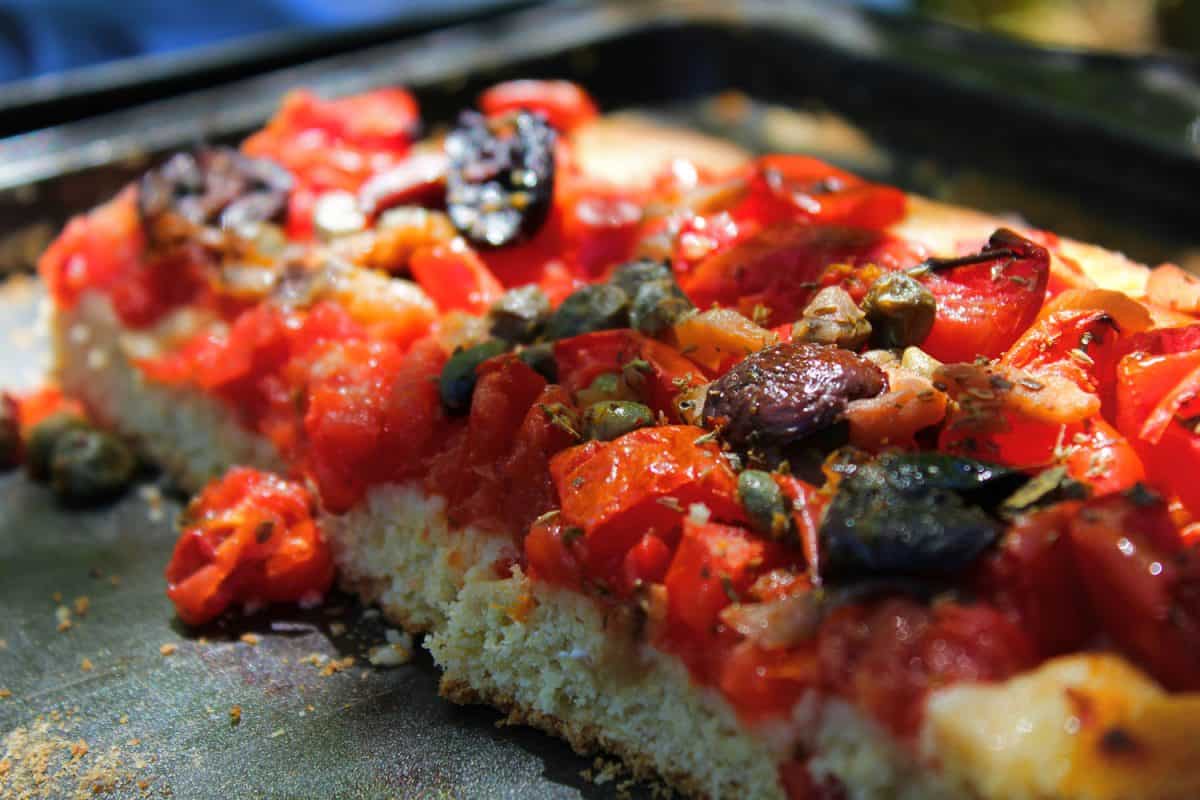 The Sicilian pizza uses an extra thick crust. It's the thickest crust. Specifically, it can be an inch or more. There are numerous versions. For example, recipes change by region. This also includes toppings and cheese.

This style typically bakes in a square tray with a coating of olive oil that lets the bottom of the dough fry. As a result, it gives it a crispy bottom crust. The rest of the dough then remains chewy and softer.

It can be made without cheese. If present, the cheese goes first. It comes before the sauce. This prevents the pie from getting soggy. Because the dough is so thick, it needs balance. As a result, it often uses large amounts of toppings, including sauce and cheese. 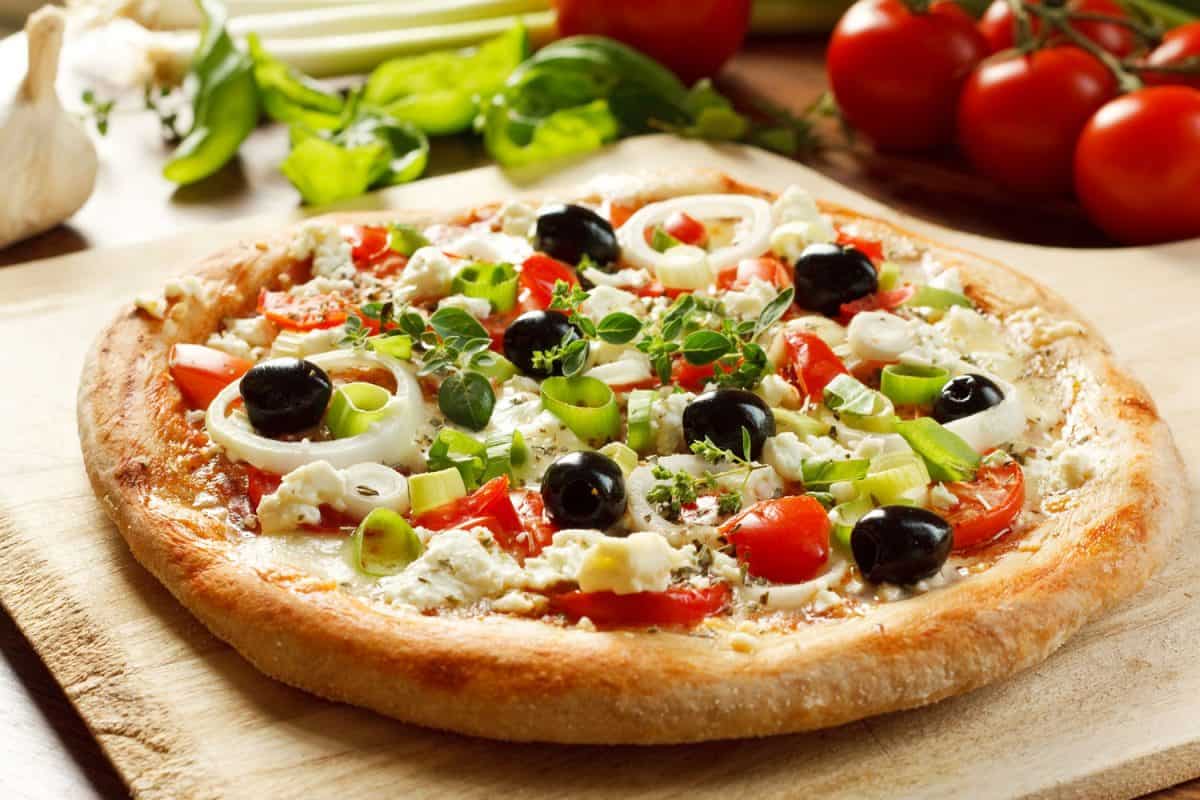 This pizza is most popular in the New England states. Greek immigrants first created it.

The crust is thick. However, it's less deep than Sicilian. It's even less thick than deep-dish. Like Sicilian pizza, oil lines the pan. As a result, the bottom comes out crispy, but the rest of the crust is chewy.

Modern pizzas may be round. However, it was traditionally rectangular.

The traditional toppings are: 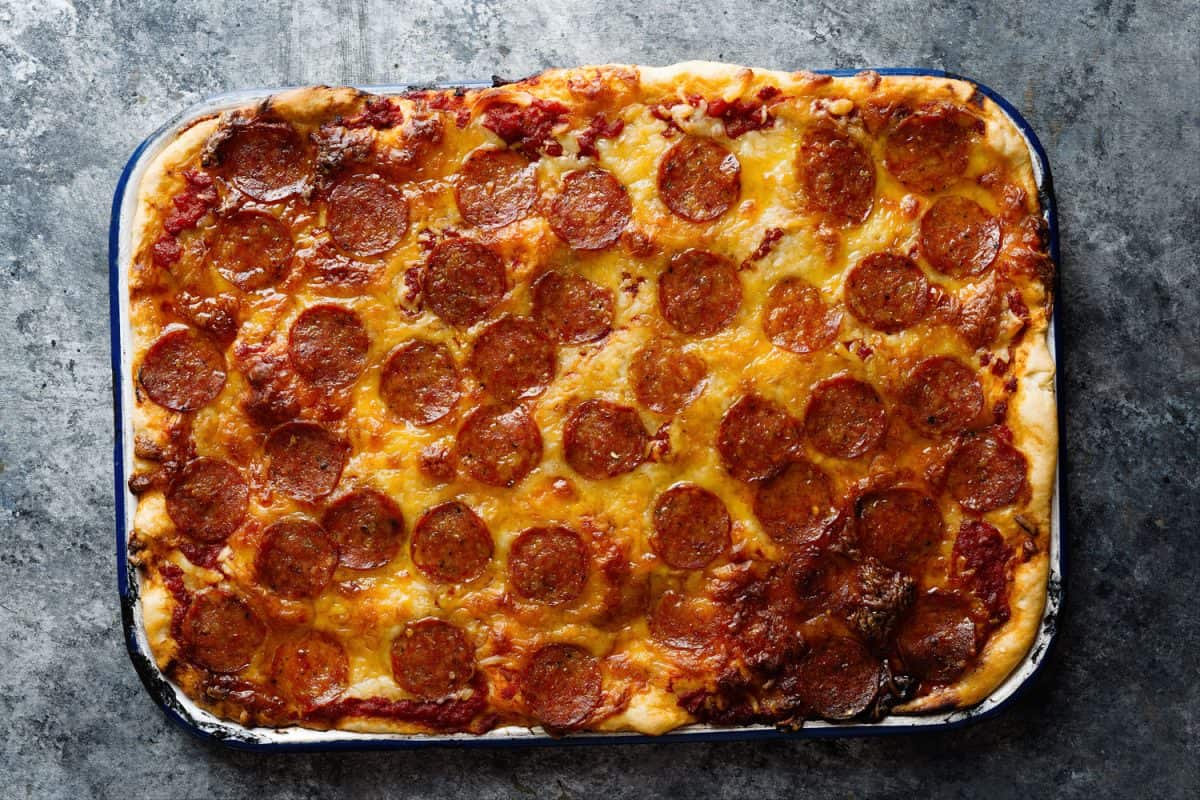 This pizza bears the name of the "Motor City." This was the dish's birthplace. And it was first baked in a square automotive parts pan. How's that for an origin story?

It cooks at high heat [500-550 degrees Farenheight]. Because of this, it cooks quickly. Most pies take 10-15 minutes. It bakes in a rectangular pan.

It also assembles in an unusual fashion. Pepperoni comes first, then comes the cheese. Usually, the chef uses sliced brick cheese to the edges of the pan. This is unlike most other styles. Additional toppings go on next. Finally, the sauce comes last. It makes the top layer. This is similar to a Chicago-style pizza.

Detroit-style pizza was mostly regional at first. The dish only began drawing mainstream attention recently. This is despite being first invented in the '40s.

Because of its popularity, it's become more available. Artisanal varieties are popping up.

The traditional toppings include: 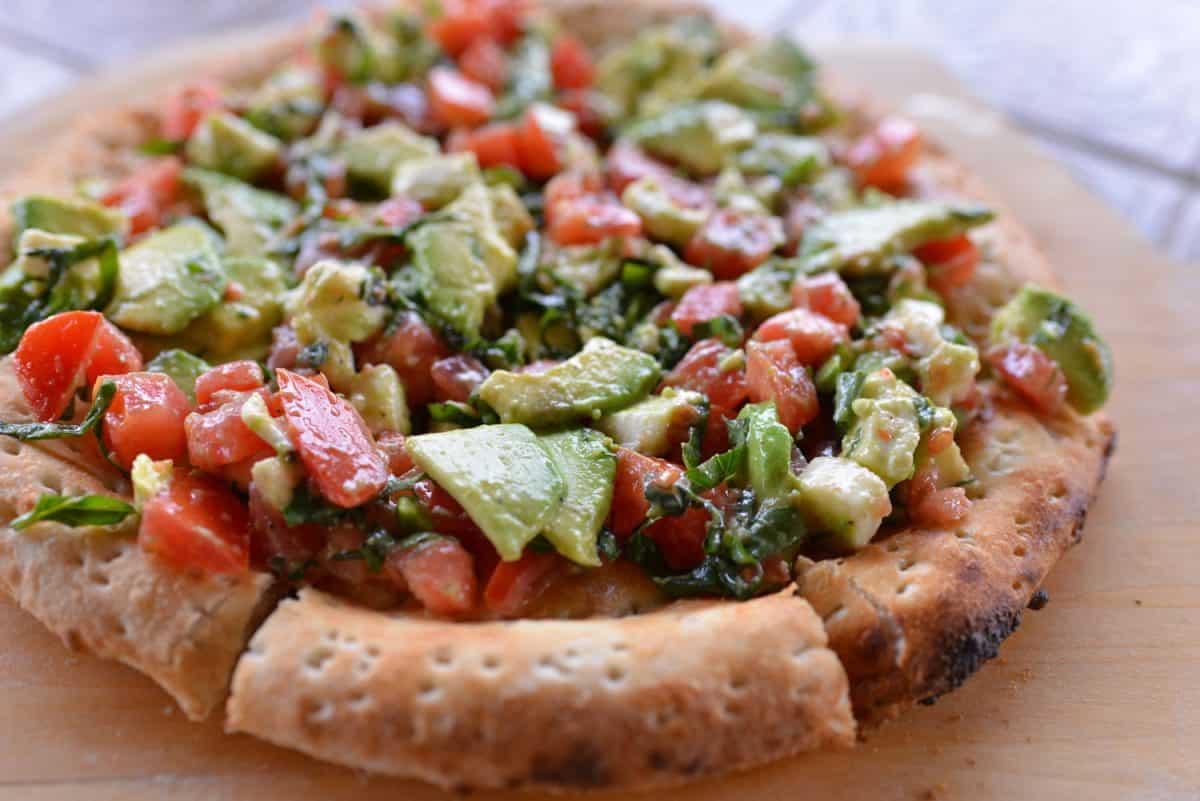 California pizza gets its own category here. This is because it can have either crust.

Chef Ed LaDou is usually credited for inventing it. Chef Alice Waters also had a part. Both took an interest in modernizing pizzas. Both tested unusual recipes. Because of this, it's a combined effort.

These are experimental cuisine pizzas. California pizza challenges tradition. It allows for imagination where unconventional combinations are encouraged. Toppings can be anything.

It's most often a thin-crust pizza. But not always. It depends on your chosen toppings. For example, some ingredients are soggy. These pair best with a thick crust.

California Pizza Kitchen is one example. They have pizzas such as "Jamaican Jerk Chicken."  Another unique pizza is "Shrimp Scampi."

What Is The Most Popular Style Of Pizza

New York-style pizza is the most popular pizza in the United States. Dominos was the best-selling pizza chain in 2019. Domino's pizza is Brooklyn-style. However, this is a twist on New York pizza.

They offer a thin-crust pizza made with cornmeal. The cheese is also different, combining mozzarella with provolone.

What Country Eats The Most Pizza?

The answer might surprise you. The country that eats the most pizza is Norway! That is, per person.

The average Norwegian eats about 11 pounds of pizza each year. Next comes Americans. The UK ranks third.

What Is The American Pizza Favorite?

It may not be hard to predict the most popular topping for pizza. It is, of course, pepperoni. 36% of American people chose pepperoni, according to a recent business study.

Sausage was half as popular. Specifically, it appealed to 14%. Compared to mushrooms, which were 11 %. Meanwhile, cheese-only pizza was selected 8% of the time.

Business advisor Brian Roemmele conducted this research. He studied point-of-sale data. This came from 604 pizza restaurants in the United States. The results were first published on Quora. 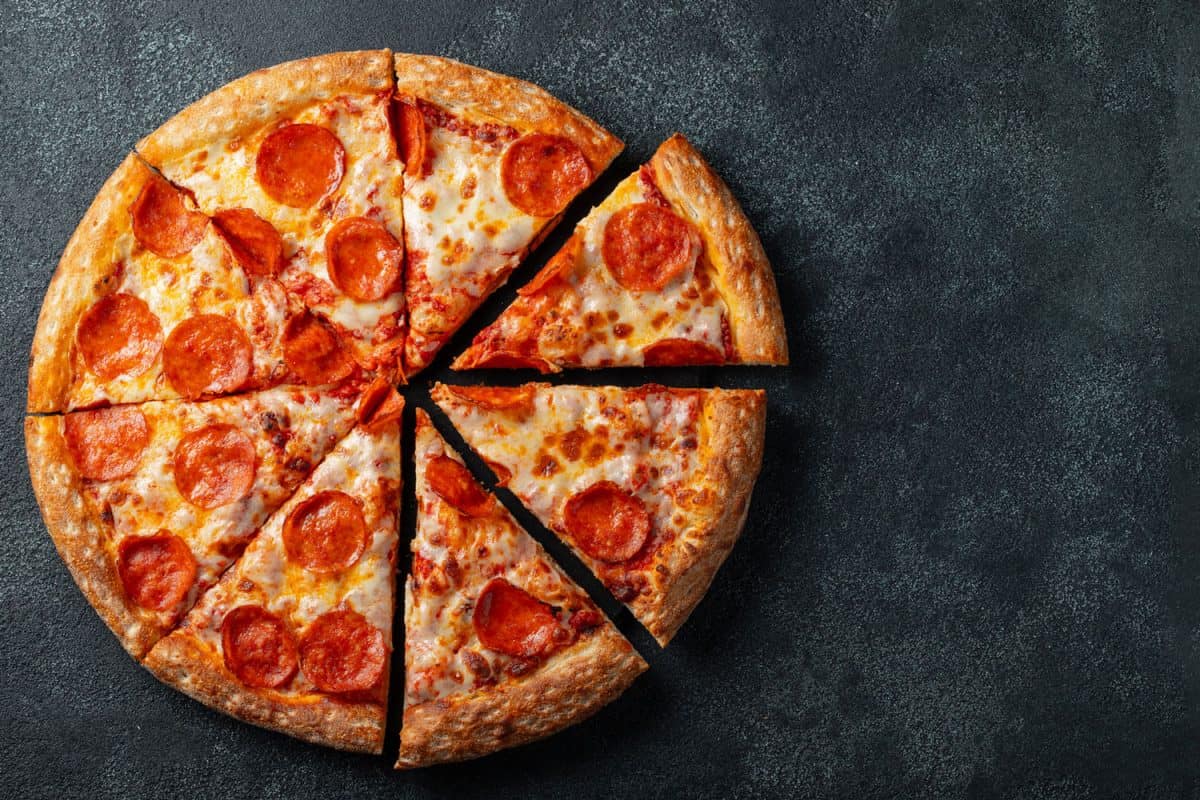 There's a wide variety of pizza styles. This means something for every taste. It doesn't matter what crust you prefer. You can still branch out and experiment.

Try Greek, Sicilian, or St. Louis pizza!  New York-style pizza might be the most popular. But it's far from the only one!

If you enjoyed this, try:

Pizza Tray VS Stone; What Are The Differences?

Should Pizza Toppings Go On Top Of Cheese Or Under?

What’s the Best Material for Stock Pots? [Know before you buy!]

What Happens If Glass Gets In The Garbage Disposal?