Convection ovens are becoming more popular, especially with the popularity of air fryers. So you might wonder, do convention ovens dry out foods? We researched the subject for you and will answer your question and give you a few tips on how to get the most out of your convection oven. 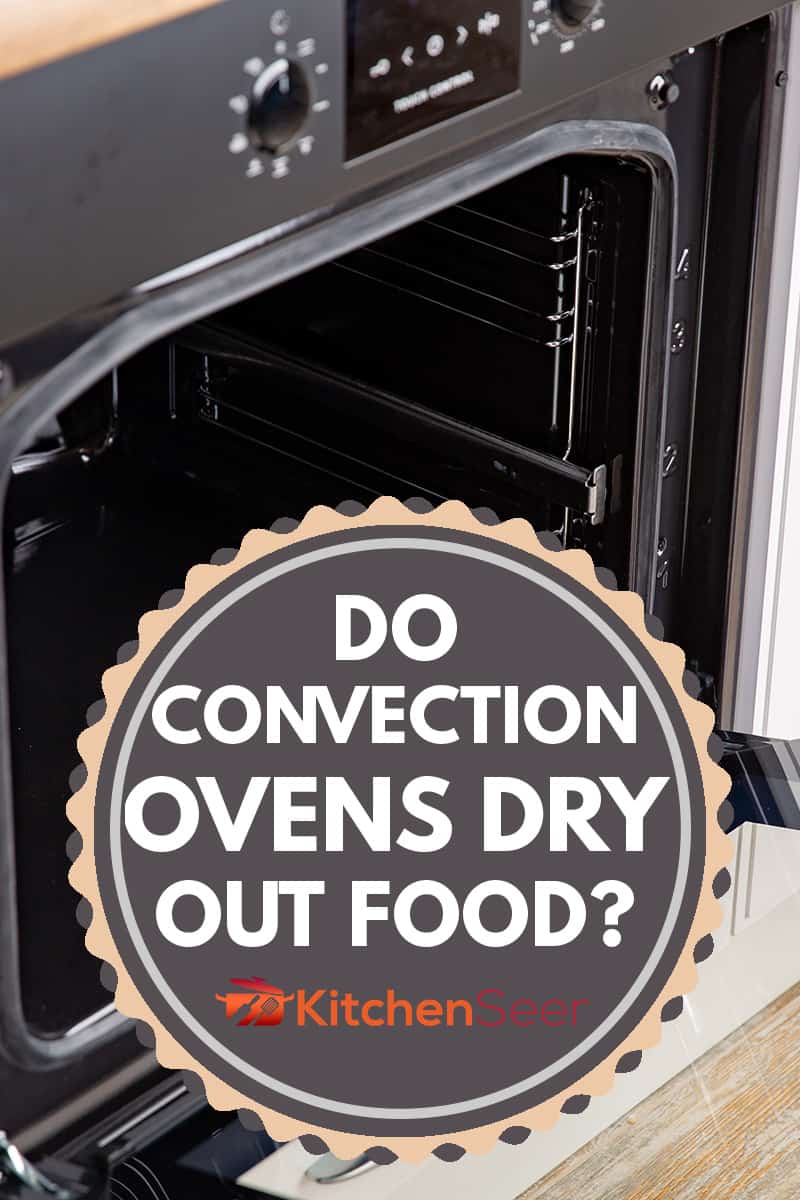 How does a Convection Oven Work?

A convection oven uses a fan to distribute the heat evenly throughout the oven, thus eliminating the oven’s temperature differentiation. The use of the fan does keep the interior of the oven drier than with a conventional oven.

With most foods, especially meats, the drier environment is acceptable. The outside layer, or the skin, crisps, and the meat stays juicy. The meat will crisp even better and stay juicier if you rub a layer of fat on it. Instead of a dry rub, mix the spices with a little olive oil. The dry rub will adhere to the meat better, and the oil will keep the meat from drying.

Because microwaves also work with a fan, microwaves can be found to include a convection oven feature. Many people do not utilize that option, even when they have it. But it is a great alternative for cooking. It adds the option of an extra oven without buying an extra appliance. It also gives you the option of using a real oven cooking technique in a small space.

Did you know that an air fryer is actually a miniature convection oven? Basically, almost everything that can be done in an air fryer can be done in a convection oven. Just use the right bakeware. A crisper tray, for example, will produce similar results as from an air fryer but take less room in your kitchen, with the advantage that a crisper tray is much easier to clean. If you would like to try it, you can use this article as a guide: “How to Air Fry Potatoes.”

Find this crisper tray for your convection oven on Amazon.

What Foods Are Best Cooked In A Convection Oven?

Convection ovens are best for cooking meat. The roasted chicken will cook faster and at a lower temperature than with a conventional oven. Since the fan distributes the heat more evenly, every part of the chicken will bake at the same temperature. The meat will cook best in a shallow dish, like a roasting pan.

Find this roasting pan on Amazon.

In actuality, roasting is best done in a convection oven. Vegetables will roast better and come out crispier. Keep vegetables to a single layer. You can always add another baking sheet if the vegetables do not fit.

Casseroles will also cook well in a convection oven. A shallow pan is preferable, as it allows the surface of the food to come in touch with the warm air.

Find this baking dish on Amazon.

Always keep in mind that a convection oven requires less energy than a conventional oven. Try what works best for you, either reducing cooking time by 25% or lowering the temperature by 25 degrees Fahrenheit.

What Kinds Of Foods Shouldn’t Be Cooked In A Convection Oven?

Pastries and baked goods that have a batter do not fair well in a convection oven. Baked goods that start as a batter can become lopsided as the blowing fan can bake the batter into ripples. For other types of dough, the jury is still out. It is a matter of personal preference. While some like the crustiness resulting from baking in a convection oven, others have a preference for the results from a conventional oven.

Convection oven does have the advantage of an even oven temperature throughout the oven. That is quite useful when baking multiple cookie sheets. All will bake evenly at the same time. Just keep in mind not to mix and match different types of foods, as the fan will distribute the odors and not just the heat.

Can You Cook Frozen Food In A Convection Oven?

Packaged frozen foods can generally be placed directly into the oven without thawing first. You should always follow the instructions on the box. If the instructions do not cover a convection oven just follow the directions for a conventional oven. Remember to either lower the temperature or shorten the cooking time.

Always defrost meat before placing it in the oven. The meat cooks best when you start cooking it at room temperature. While there are some methods for speeding the thawing process in the oven, it is not advisable. Also, it is only possible for small parts of meat, no more than two to four servings. You can speed thaw by placing the meat in the oven at 135 degrees Fahrenheit for no longer than 20 minutes and check the meat regularly.

Baking in a convection oven will not dry out your food. However, you will need to make some adjustments for most foods, mainly time and temperature adjustments. Cake batters might be a challenge, but overall it is a good option. You can find out more about convection ovens in this article: “How Big is a Convection Oven.”

Why Does My Pantry Smell Bad? [And How To Fix That]

Best Refrigerator Brands On The Market

How Much Does A Deep Fryer Cost?