Figuring out the best way to cook something isn't always easy. Do you want to make a quinoa soup but have no idea whether you should cook it before adding it to the broth? Is it generally better to add quinoa to soap before or after it's done?

We have the answers to these questions and many others below!

Most times, it isn't necessary to cook quinoa before adding it to your soup. In contrast, you can wait until the soup is already cooking or almost done before adding in your quinoa.

However, this depends on your recipe and preference, so it's also fine to pre-cook quinoa and add it to your soup.

As we begin this article, we will cover all things cooking quinoa and discuss whether you should add it to soup already done or let it cook alongside your broth/other ingredients. If you're a new chef, experienced, or have other related questions, we're here to help. With that said, let's dive right in! 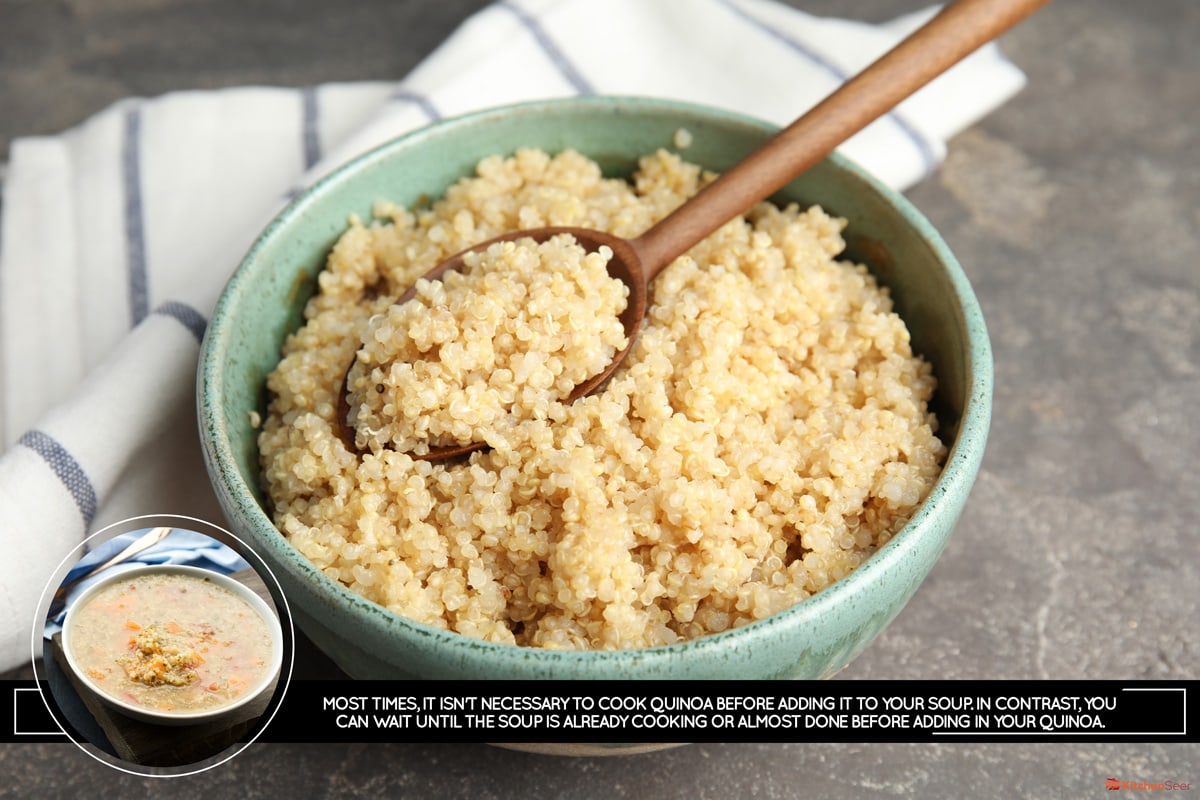 Should I Cook Quinoa Before Adding It To Soup? 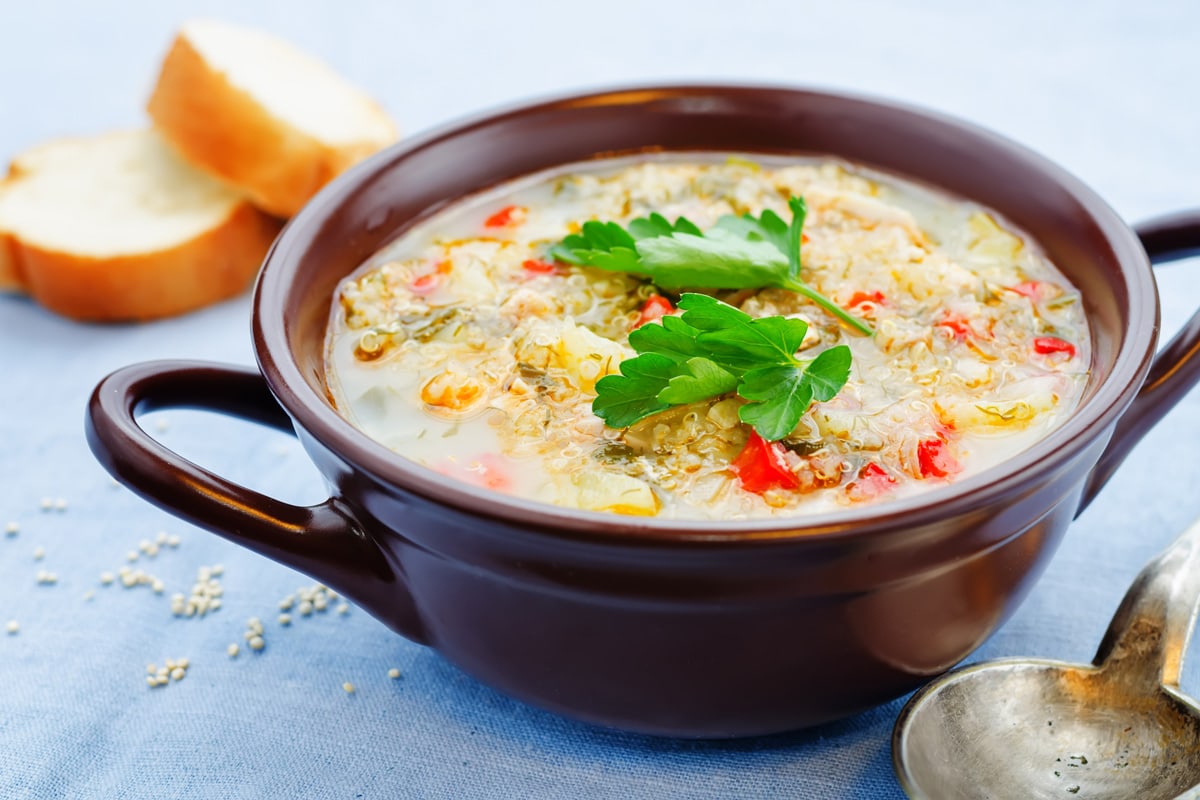 Although you don't need to cook quinoa before adding it to soup, that's not to say this isn't an option. Generally, chefs will throw in their quinoa once the soup is almost finished, letting it cook during that timeframe.

However, that doesn't mean there is only one way to do this. In contrast, other people prefer cooking their quinoa at the same time inside their broth or in a separate pot, so there are alternative ways to make the perfect meal.

Between the two, you are less likely to overcook quinoa if you pre-cook it and then add it to your soup. We say this because quinoa cooks pretty quickly, and the other ingredients in your soup could have different timelines.

According to pros, you might even want to mostly cook your quinoa and then throw it into your soup for the last few minutes. Doing this will give the quinoa enough time to heat through.

How Long Does Quinoa Take To Cook In Soup?

In general, quinoa will take between 10 and 20 minutes to cook in a soup. However, this greatly depends on what other ingredients are in your recipe.

For example, if your soup is mainly broth, the quinoa is more likely to soften faster. On the other hand, if you have tons of veggies in your soup, that's when the quinoa could take its sweet time to cook through.

Most quinoa soup recipes call for around 20-25 minutes in total, so that's a reasonable starting estimate. Again, this will come down to the other items in your soup, the stove temperature, and whether you pre-cook your quinoa or not.

A good idea here would be to cook your vegetables in the broth for about 10-15 minutes, then put the quinoa inside the pot for an additional ten minutes.

Your soup will be fully cooked, but the quinoa won't become mushy. This timeline might become longer if you have meat in your soup, so keep that in mind.

How Does Quinoa Hold Out In Soup?

Most of the time, quinoa should hold out well in a soup. Since it absorbs water/liquid, the quinoa in your recipe shouldn't have issues during or after cooking.

With that said, if you overcook quinoa, there is a chance it will taste mushy and less flavorful.

According to experts, quinoa is generally prepared in three ways:

Therefore, you might have more success preparing your quinoa one way versus the other. This depends on temperatures, other ingredients, and how you decide to serve and store your soup.

On top of that, since quinoa is a starch, it may begin to break down in soup after a few days. So, expect to enjoy leftovers for about 1-3 days before noticeable differences in taste and texture occur.

That goes for most soups, so it's generally better to eat them the day of or after making them.

Yes! Most times, adding quinoa to a soup can work as a thickener. As we mentioned above, quinoa is starchy, meaning it absorbs liquids.

So, adding it to a soup can result in more thickness and less "soupy" consistency once everything is said and done. With that said, quinoa won't thicken a soup nearly as well as flour or cornflour, but again, that's not usually the intention.

When you prepare quinoa soup, it should be on the watery side. Like a chicken soup or other rice-incorporated recipe, you don't always need to create a super rich, creamy flavor using quinoa.

On top of that, quinoa doesn't contain any glue-like protein, which is gluten in wheat flour. So, it would help if you didn't rely on it to transform the consistency of the soup you add it to.

Instead, focus more on its flavoring and add other vegetables or meat alongside it.

How Do You Cook Quinoa, So It Doesn't Get Mushy? 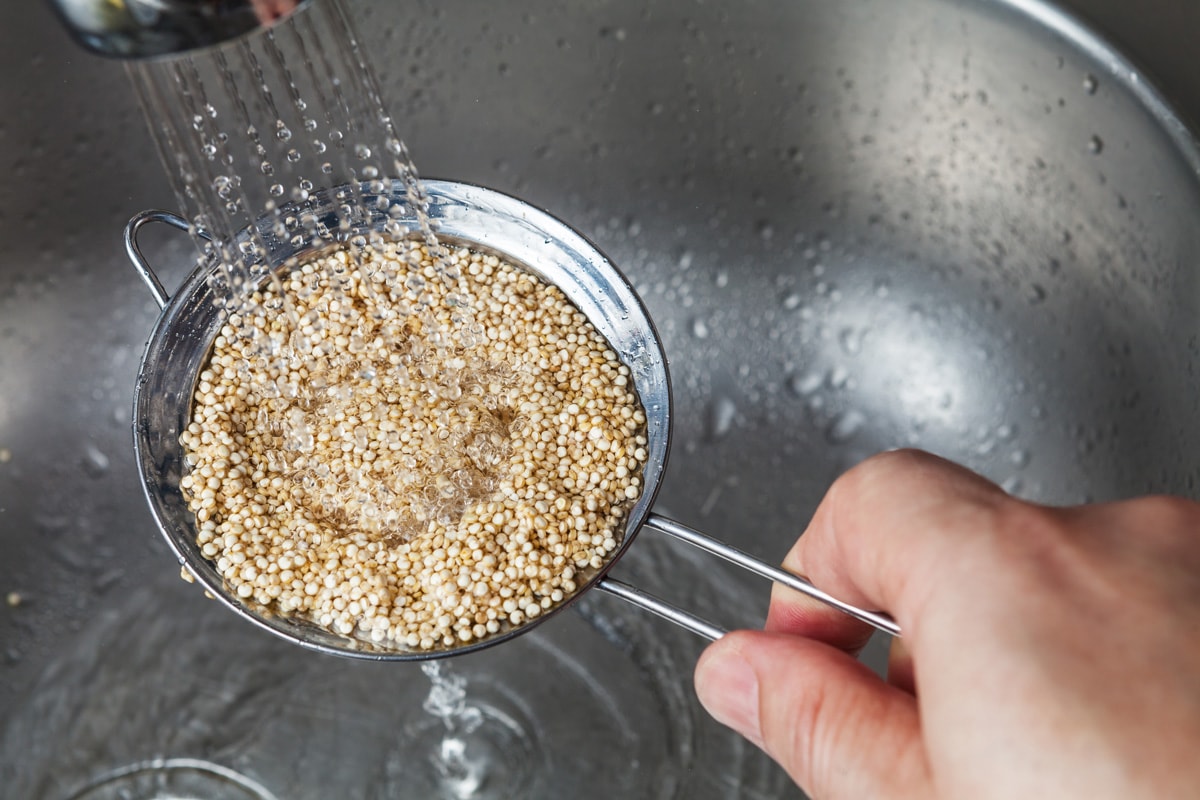 Now that you know the basics of making soup with quinoa, how do you keep it from getting mushy? According to experts, you want to use twice as much water as quinoa, then cook uncovered until the quinoa has absorbed all the water.

From there, you can add it to your finished soup, keeping it from overcooking. As we covered earlier, cooking quinoa before adding it to soup is a great option.

Even though it isn't necessarily required, you can still get the most out of your quinoa by preparing it before mixing it in with the other ingredients.

Again, you can also cook your quinoa in the soup broth alongside the other ingredients, although doing this for more than 20 minutes could result in overcooked grains.

Worst case, try both methods and see which tastes better!

Do You Leave The Lid On When Cooking Quinoa?

For those of you confused about whether to keep the lid on or off during your quinoa's cook time, you want to do both. First, cook your quinoa uncovered until it absorbs the water in its pot.

Once this happens, you can put the lid on your pot and let the quinoa steam for five minutes. Again, you might not need to do this if you cook your quinoa in a soup, as you will likely want to keep the pot uncovered in that method.

A common cooking practice among experienced and newer chefs is starting their quinoa uncovered, regardless of how they plan to use it.

You will often cook grains, soups, and pasta without the lid covering the pot, so this is normal to do while preparing your meal. Again, every chef is different, so do what makes the quinoa taste the best.

What Ingredients Should I Add To My Quinoa Soup?

Depending on your mood, you might want to fill your soup with vegetables, meat, or other seasonings when you work with quinoa. However, this all comes down to the recipe and what flavoring you want your quinoa meal to have.

According to Simple Veganista, you can try adding beans, cabbage, zucchini, tomatoes, red pepper flakes, salt, and pepper to your quinoa soup to make it extra tasty.

On top of that recipe, you might want to add stock, chickpeas, tomatoes, tomato sauce, and Italian seasoning to your quinoa soup to make the perfect creamy dish!

As we said before, quinoa is very versatile and can work to thicken a soup, so you don't always have to use it the same way. One common theme with quinoa soup recipes is they tend to cater to vegetarian and vegan diets.

However, if you eat meat and want to add a bit of chicken to a quinoa recipe, that's perfectly fine. Like many starches, quinoa pairs nicely with meat for a chicken broth soup and various recipes.

You may even see quinoa soup with beef or other tender meats, so this doesn't have to be for non-meat eaters.

Is Quinoa Healthier Than Rice? 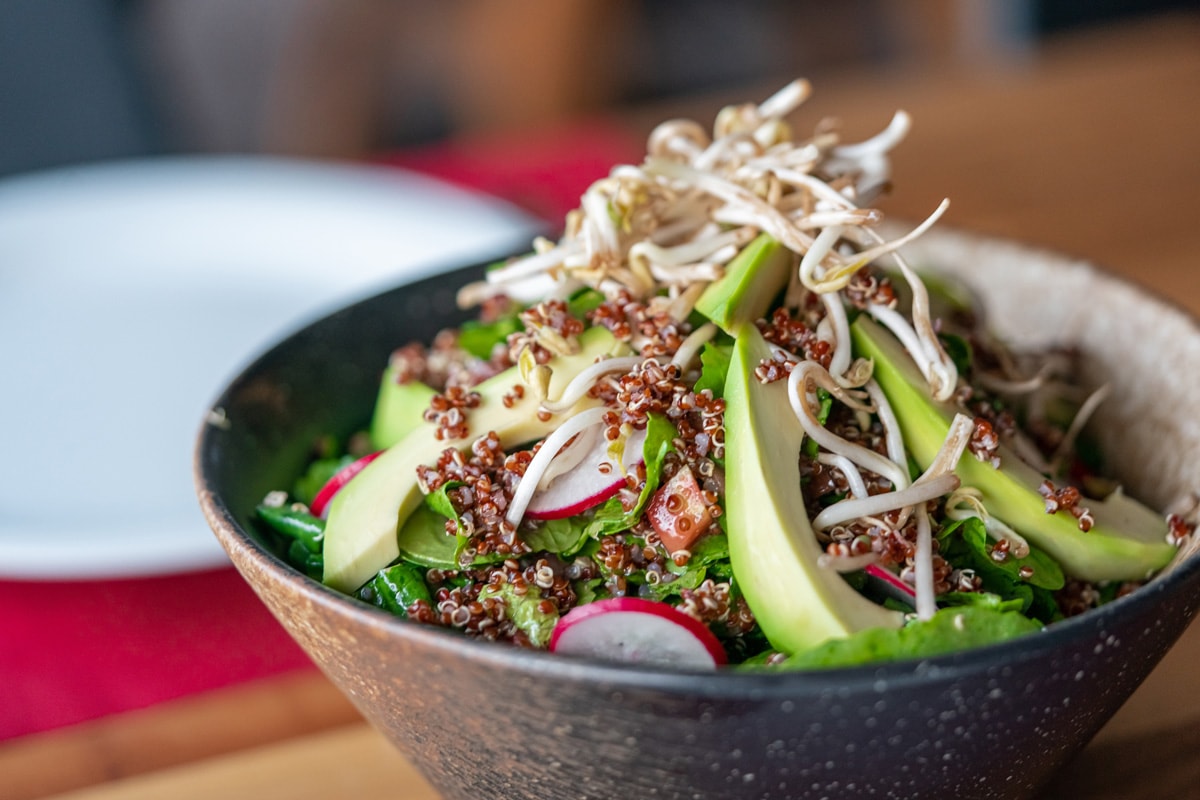 Although these two ingredients are often confused with each other, quinoa does have the edge over rice in terms of healthiness. In general, quinoa and rice are comparable in calories and fiber content.

However, quinoa is a complete protein, while rice (brown specifically) only contains a few of the essential amino acids. So, in terms of heartiness, quinoa is a more substantial grain to cook with.

On top of that, quinoa is generally better for people on a diet. Even though it contains more protein than rice, quinoa is healthier and less fattening.

According to India Times, there is more fiber in quinoa than in rice, which helps make it a slightly healthier, better choice for your cooking/dieting.

You also want to consider that white "sticky" rice is incredibly fatty and is not comparable to quinoa in terms of healthiness.

Many people will actually eat white rice to gain weight, so it's not a good alternative to quinoa.

To Finish It Up 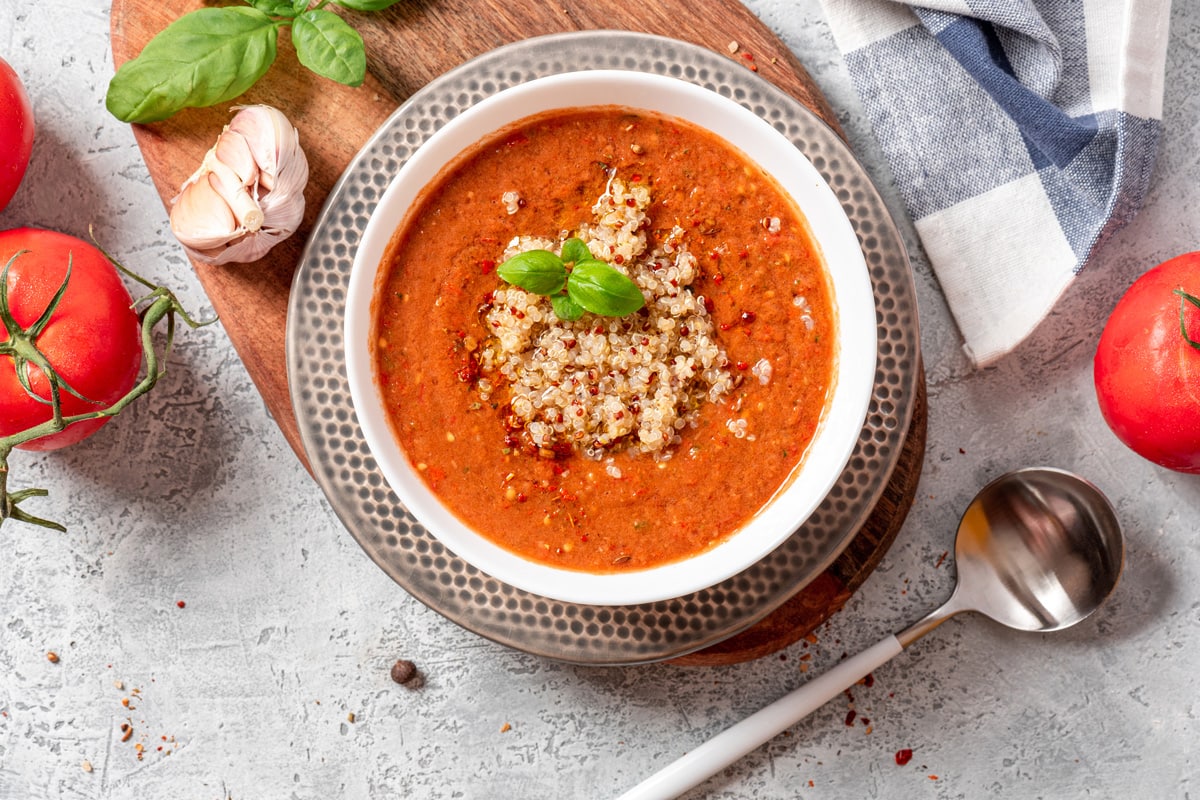 Whether you love cooking with quinoa or have yet to try it: there are plenty of ways to use it in soup. We found that you can cook quinoa before adding it to your soup, although this is not required.

Additionally, you might prefer to pre-cook your quinoa before adding it to your soup to avoid it becoming mushy, so that's something to think about.

Especially if your recipe calls for vegetables and meat, pre-cooking the quinoa can be a good choice. Of course, every chef is unique, so do what makes you feel more comfortable!

Made it to the end? Check out these related kitchen articles below:

How Long Can You Keep Quinoa In The Pantry?

How To Use Quinoa Flour [Inc. 10 Awesome Recipes]

What Are The Best Blenders For Grinding Grains?

How To Store Homemade Noodles—Cooked And Precooked!

Should Cornbread Batter Be Thick Or Thin?