If it's time to upgrade your refrigerator, you might have set a plan for everything. However, there's another factor to consider. Can the fridge lay on its side or back during transport? If that's your concern, we have the answer for you!

There are a few ways that you can transport a refrigerator. In general, most would lay it on its side, or front, or have it standing upright for the whole journey. That said, it's not a good idea to have a fridge lay on its back because its internal components can't support the appliance's weight and can become damaged.

There are more details to cover. Getting a new fridge isn't as simple as taking it back home and starting it. Like most big appliances, refrigerators need some time to settle. Failing to do so could have you making a return visit to the store or force you to call the manufacturer. We cover these topics and more further ahead. 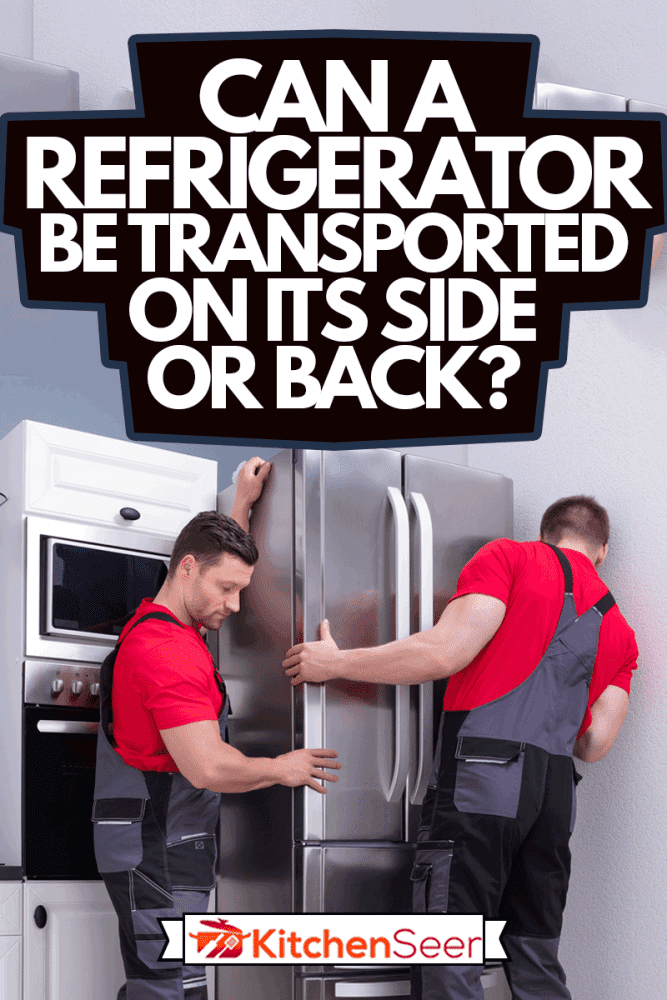 The Process Of Moving A Refrigerator 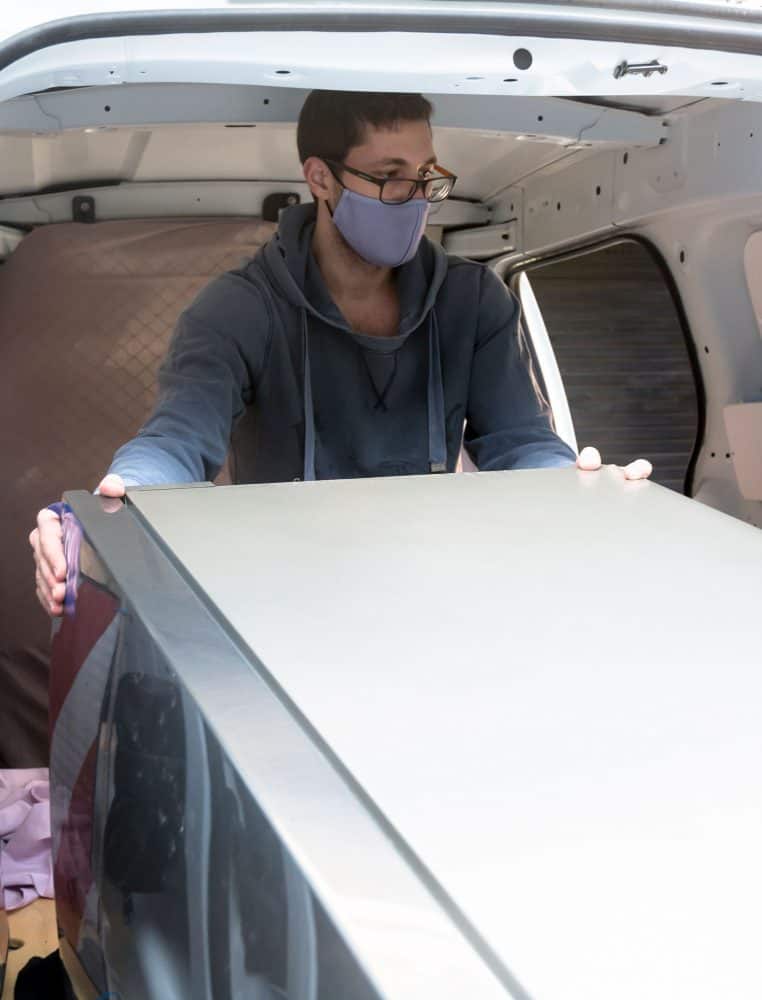 As we mentioned above, there are various ways to transport a refrigerator. But, it all depends on the space you have to work with. For example, if you're hauling a fridge with limited space, it's okay to have it lying on its front or side.

If you're laying it on its side, make sure the hinges are opposite the side it's laying on. When it's lying on its face, make sure to consider hand placement as you're picking it up. This way, you or other helpers aren't at risk of a dangerous accident if the doors happen to open.

Though, in most cases, laying it on the front isn't a consideration. The best way to transport the fridge would be on its side or standing upright. Of course, there's still another area that you might want to try.

Can you lay a refrigerator on its back? Large retailers like Home Depot would not recommend doing this. The back of the fridge is where all the essential components are.

If the fridge is lying on its back, it's putting all the weight on the mechanical components. As a result, they can potentially break down during travel. So, that leaves us with two options.

The realistic way to transport a fridge would be on its side or standing upright. At this point, you might be wondering if there's a difference between the two.

With that said, having the refrigerator lying on its side is a less preferable option. Regardless, if you don't have a vehicle that can help you avoid doing this, it's possible to transport your fridge on its side.

There is an additional settling stage that'd you need to do if you choose to haul it this way. However, if you have enough space to transport it upright, this is our recommendation.

Transporting a fridge upright means you can skip the step of waiting to turn it on. Though, it raises the question, why would you need to wait if the fridge was lying on its side during travel?

The Danger Of Laying A Refrigerator On Its Side 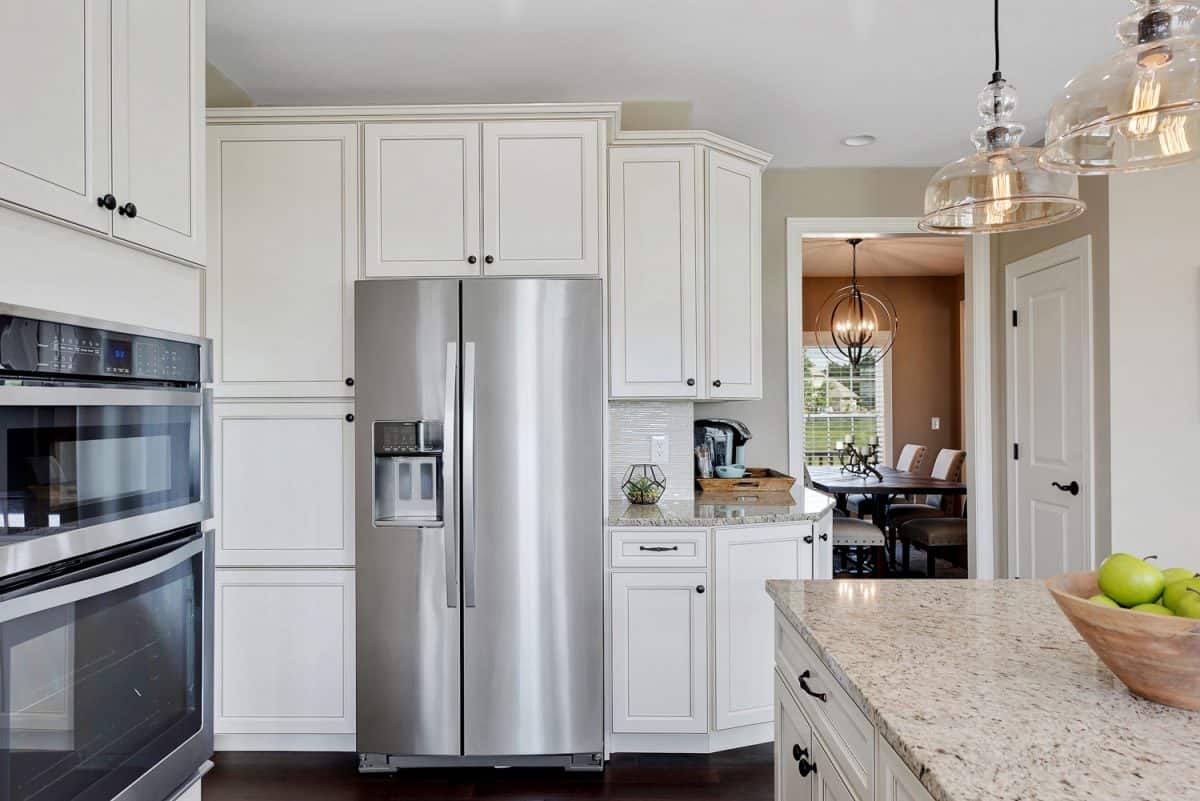 The reasoning behind having a fridge settle after laying on its side has many debating over its authenticity. If you look online, there isn't one definitive source. For this reason, you'd have some people claim it's an urban legend.

However, their justification all comes down to luck. Even if the fridge works after traveling on its side, that doesn't mean others will have the same result.

The limiting factor is the oil inside the system of your fridge. As far as placement goes, the oil is present in the compressor. When you lay the fridge, some of that oil can leave the compressor and travel to parts it shouldn't be.

More specifically, it can travel to the cooling lines. It stays there for the duration of the trip. Once you stand it upright, most of that oil will remain nearby.

It's a thick oil that can clog the lines. As a result, it makes cooling a tough job for the fridge. On top of that, there's also very little oil left in the compressor.

So, once you plug it in, two things can happen. In the first scenario, your refrigerator will startup with a few hiccups. Still, even if it starts up, you might have shortened its lifespan without knowing. Keep in mind that refrigerators last 10-20 years.

In the second scenario, it won't start up at all. You might hear a loud buzzing sound and witness the refrigerator ultimately failing to start. It's a rare situation, but it isn't impossible.

How To Transport A Refrigerator On Its Side

There's another detail that you need to know if you plan on transporting your fridge on its side. If it's impossible to have it upright for travel, make sure the connection pipes of the compressor are facing upwards.

Regardless, the main objective is to avoid having as much oil traveling to other areas inside your refrigerator. 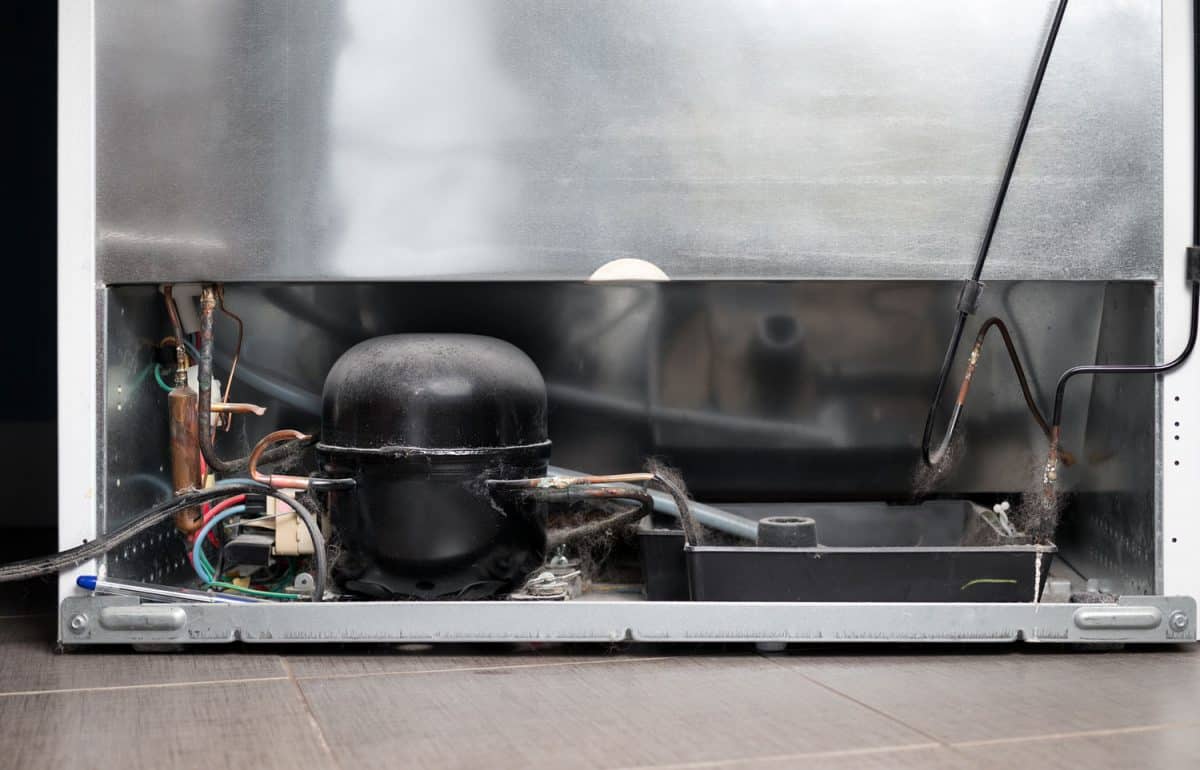 If you'd like a visual example, the photo above is an example of a typical refrigerator compressor. The part you want facing up is the copper tube. Some even say it resembles a hotdog.

Regardless, you want to avoid having this component below the compressor. The specific name for it is the filter drier.

Additionally, you'll have to check with the manufacturer to see if it's possible to transport the fridge on its side. This usually will depend on the model of your refrigerator. Some manufacturers like GE list their fridges that are capable of handling sideways travel.

How Do You Transport A Refrigerator In A Pickup Truck?

We should know by now that the best way to move a fridge is by having it stand upright. Now, let's say you have a pickup truck. How can you transport your refrigerator using one?

The first step would be to secure your refrigerator in several spots. You have to make sure there's no way you can damage the doors or the cable. To do this, grab a roll of tape and use it to secure the doors of your appliance shut.

Next, take the cable and tape it to the side of the fridge. The front is another good option; the main concern would be getting it out of the way.

Moving a fridge is no easy task. For this reason, use a dolly to get the fridge from point A to point B. If circumstances allow it, have someone help you move your appliance to the back of your pickup truck.

Of course, if you have to do this yourself, loading a refrigerator on a truck will take some strength.

Here's a video to show you the proper way to load a fridge onto a dolly:

The best way to load a fridge onto a truck would be to use a tailgate ramp. However, if you don't have a ramp, you'll need to rest one end of the refrigerator on the edge of the tailgate.

If you're strong enough, you can go ahead and push the refrigerator to the bed of the truck. For safety reasons, it's better if you have a helper. Otherwise, there's an increased risk of an accident following this method.

Now all that's left to do is push your refrigerator to the front of the truck bed. In addition, you'll need to secure the fridge. To do this, place one ratchet strap across the front of your appliance and another strap over the top.

Here's a YouTube video demonstrating the steps we just covered above:

How Do You Fix A Refrigerator That Was Lying Down?

The way a fridge was lying down is an essential detail to getting it up and running in your home. As we mentioned, turning it on too early after lying down can cause problems for your refrigerator.

In most cases, this will mean the compressor has blown out. The solution to your problem would be to replace the compressor altogether. If you haven't plugged your appliance in yet, you can fix the issue by having it stand upright for a few hours.

Can You Tilt A Refrigerator?

Yes, you can tilt a refrigerator. Doing this is the only way you'll be able to get it onto the dolly. As we covered, this shouldn't be for an extended period.

Furthermore, the risk of getting oil inside other components inside your fridge is minimal. The main concern would be laying the refrigerator on its side or back during transport.

How Long After Moving A Fridge Can It Be Turned On? 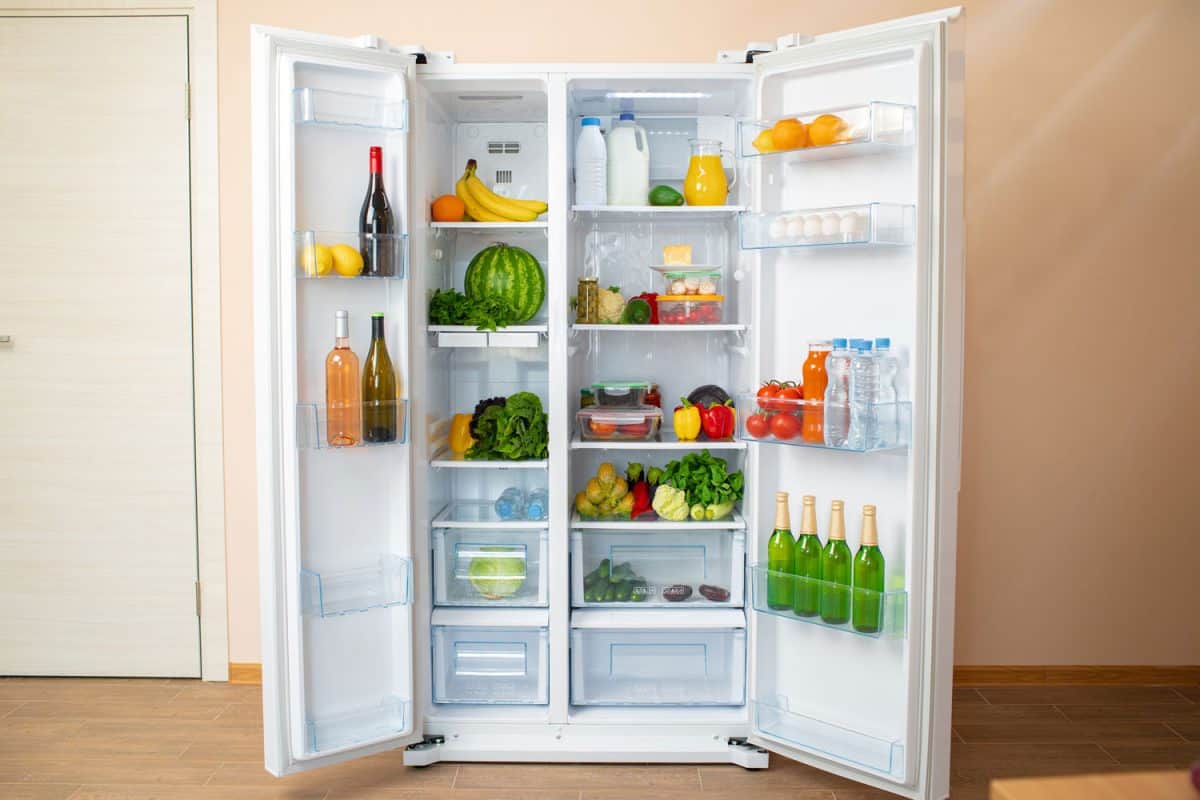 Manufacturers like GE recommend waiting 24 hours after moving a fridge before turning it on. That is if it was lying on its side during transport. It will need time to let the oil settle back into place.

That said, if a fridge stands upright during transport, it's safe to plug it in immediately. However, it's always better to be cautious, so we recommend waiting a few hours regardless.

There's always a proper way to do things. Regarding refrigerators, it's best if you let them stand upright. Doing it any other way makes moving and starting them a much longer process.

Before you go, do you have other refrigerator concerns? Check some of these articles below!

Can You Reset A Refrigerator By Unplugging It?

Can You Place A Refrigerator In The Corner Of The Kitchen?

KitchenAid Refrigerator Not Cooling – What To Do?

Little Dead Bugs In Fridge? Here’s What To Do