Trying to make delicious gourmet coffee at home can often be disappointing. One of the best ways to elevate homemade coffee to the level of a barista is to add frothed milk. Unfortunately, we don't always have to same tools in our kitchen to froth milk as they do in fancy coffee shops. That's why it's good to know if you can use something you already have, like an immersion blender! We have researched all about immersion blenders to see if you can use yours to make excellent frothed milk!

Yes, you can use an immersion blender to froth milk. To get the best result with this tool, you will want to take a couple of precautions. You will also want to prepare your milk properly before using this tool. Lastly, use the immersion blender to make creamy and frothy milk that can be enjoyed in various ways!

While not everyone owns a frother, many people do own an immersion blender. After all, the best kitchen tools are the ones that have a variety of uses. That's why being able to use your hand blender to froth your milk is such a great idea! Now, before you start frothing milk for everything, there may be some more information that you may need. Make sure that you keep reading down below for the ins and outs of frothing milk with an immersion blender! 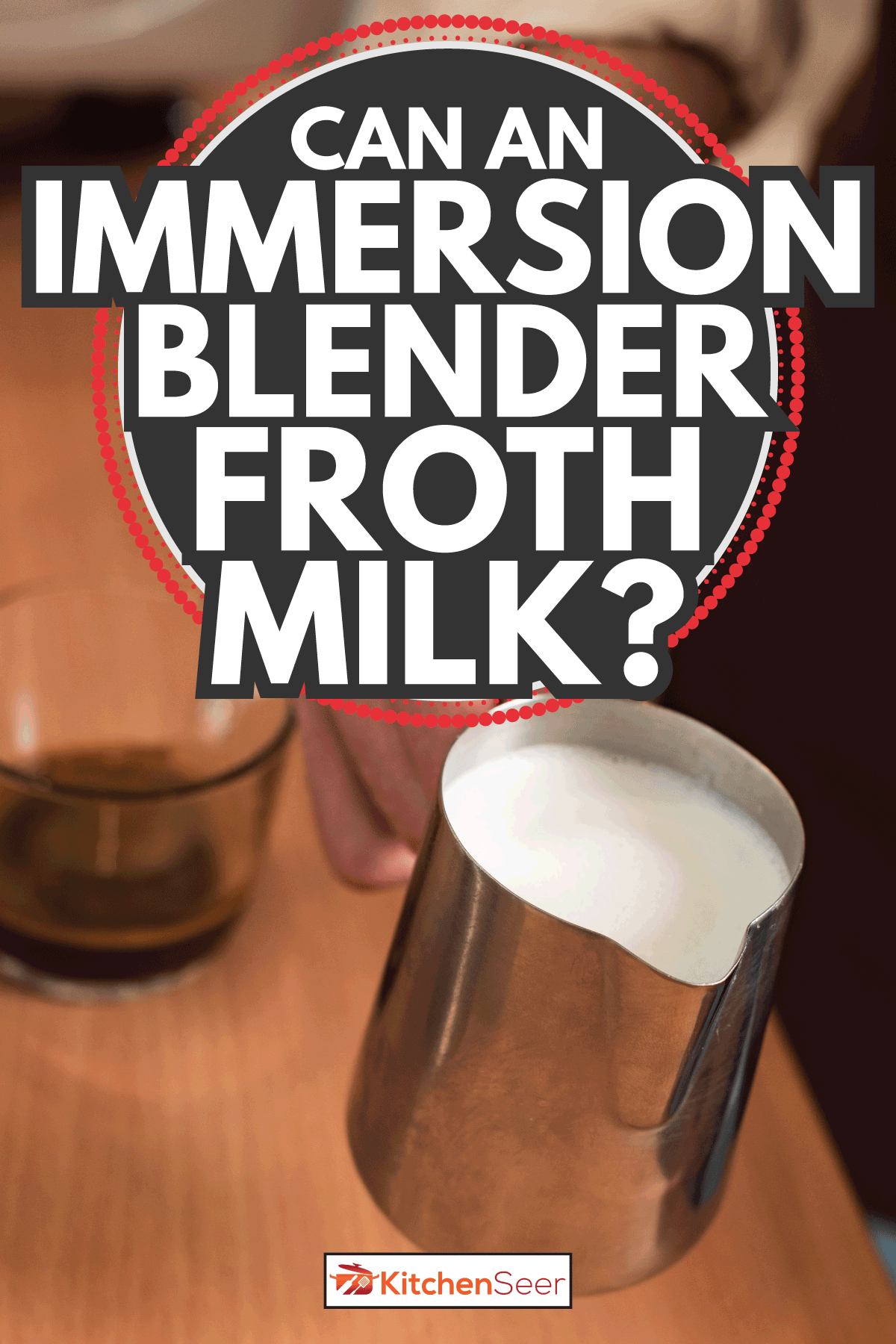 Immersion blenders are incredibly convenient tools to have in your kitchen. They are far less clunky than a standard blender, and they are easier to clean! These hand blenders are usually meant to do the job of a blender but on a smaller scale. 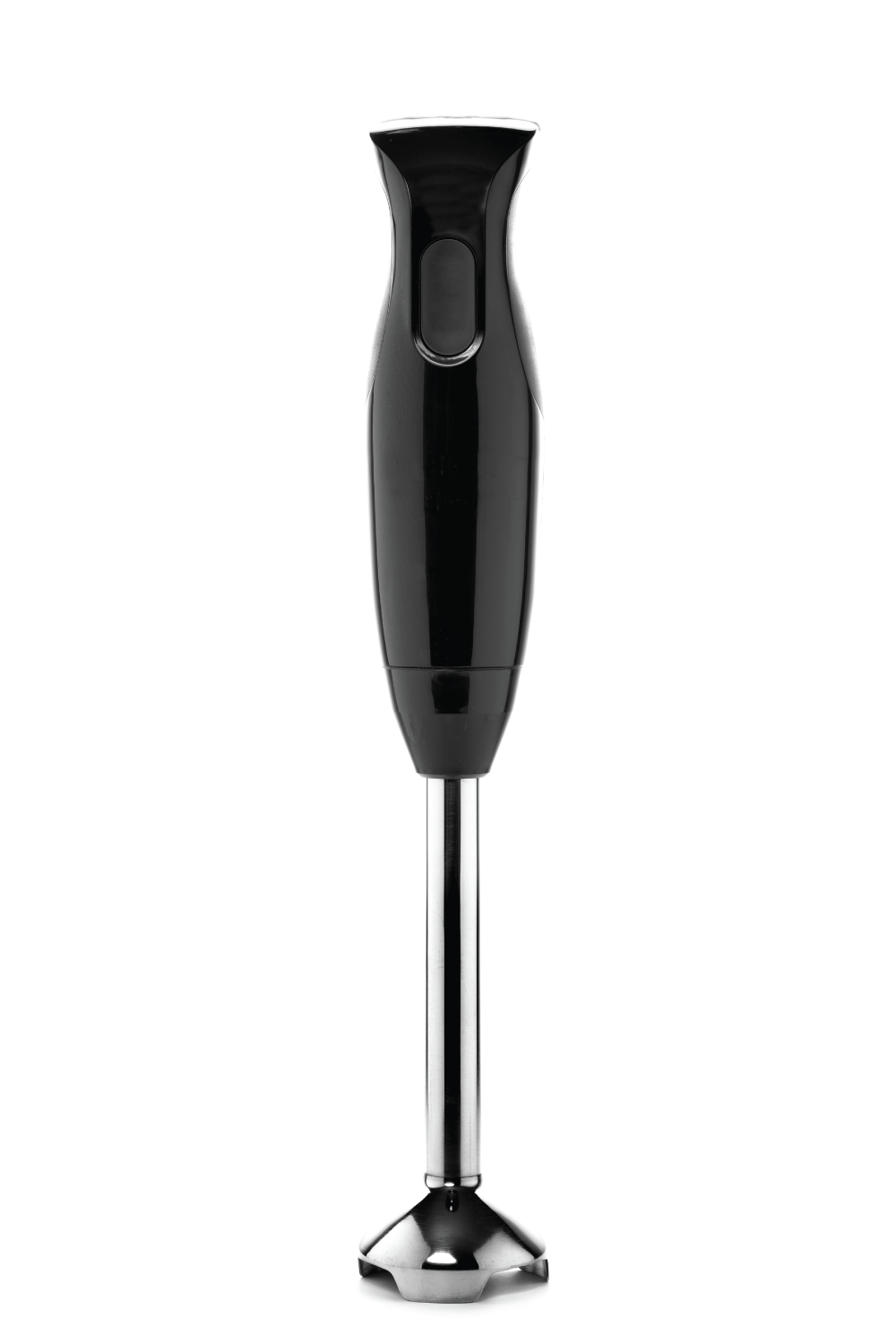 They're great for making soups and sauces directly in the dish they're being prepared in. Making things like shakes and smoothies is also a breeze with this gadget. Since it can do so much, it's no surprise that it can froth milk too!

Click here to shop for immersion blenders on Amazon!

Why Can You Use An Immersion Blender To Froth Milk?

Since immersion blenders do such a great job blending and pureeing other liquid-based dishes and ingredients, they can be used in milk. The process of frothing milk is simply adding air into it to make the milk foamier and creamier.

Since immersion blenders can whip things up quickly, they can also effectively add the air into the milk necessary to make it foam up. Hand blenders have a very similar result to actual frothing tools.

Precautions To Take Before Frothing Milk With An Immersion Blender

The main problem to be on the lookout for when using immersion blenders is the mess. This is true regardless of what you are blending. Since it's a hand tool, you cannot lock in what is being blended with a traditional blender.

You use the immersion blender by putting it directly into a bowl or dish so that the food can escape. Most things that you use these hand blenders on are a little thicker, so they're less likely to make a mess. However, with milk, it's so thin that it's more likely to splatter.

Due to the likelihood of a mess being made, you should do what you can to prevent it before you get started. Make sure that the dish you are using is deep. Also, you should put your milk in something that doesn't have a very large opening. Use something like a large glass instead of a bowl. Make sure not to fill the container too full with milk either. Filling it more than halfway or so is asking for a mess.

Prepare Your Milk Before You Froth It

You also want to consider what milk you are using. Some milk foams better than others. You'll want to consider using thicker whole milk over the regular 2%. Non-dairy kinds of milk also do not froth as well as regular milk due to their different ingredients.

Usually, starting with cold milk is how you get it to foam as best as possible. This is easy with a frother since it will heat during the process. However, if you want warm-frothed milk with an immersion blender, you have to heat it first.

You can blend it while it's cold to get slightly better foam, but it will have to go into your beverage cold. If you try to heat it after you've frothed it, then the foam will break down and disappear some.

How To Froth Milk With Immersion Blender

To froth milk using an immersion blender, you will use it the same that you would in anything else. Once you have your milk selected, warmed to your preference, and put in a container that will minimize any possible mess, you can start blending.

Lower the blending head into the milk until it is completely submerged. Turn the blender on low and carefully move it throughout the milk for 3 to 5 seconds or until it has the desired amount of foam.

You can use your blender at a higher speed, but it's best to start on low so you can have an idea of how much it will splatter. Then pour your silky-frothed milk onto your beverage and enjoy!

Here is a very helpful video that shows how to froth milk with an immersion blender and shows some other blending possibilities!

More Thoughts On Frothing Milk With An Immersion Blender

Knowing how to get the best-frothed milk possible with an immersion blender is only part of the equation. We've got you covered for any other questions and thoughts surrounding this subject!

Is An Immersion Blender The Same As A Frother?

No, these tools are not the same. When used to froth milk, the result is similar, but these tools do have differences. Frothers do froth milk better overall since that is what they are designed for. You can start foaming the milk with frothers while it's cold, which makes a better foam, and this tool will heat the milk for you.

Immersion blenders don't heat the milk. Since you have to froth it while it's already warm, it will not produce as much foam this way. However, an immersion blender is a far more multifunctional tool than a frother.

How Do You Make Foam With An Immersion Blender?

Making foam with an immersion blender is simple. Just lower the blending part of the tool into the warm milk. Ensure the milk completely covers the blender head, and start blending it on a low setting to get quick and easy foam! If you want more foam faster, you can use a higher setting, but the higher the speed of the blender is, the higher the chances are of making a mess!

What Container Can I Use To Froth Milk?

While you can technically use anything, some containers are better than others. The wider the opening on the top of the container is, the more mess you're going to have to clean up. That's why they make steaming pitchers that are perfect for frothing milk in.

These metal pitchers are slightly tapered towards the top to help prevent any milk from being spit out of the container. They are the same tool that baristas use when steaming milk with a steaming wand on an espresso machine.

Are There Ways To Make An Immersion Blender Better At Frothing Milk?

While we have been talking about using a standard immersion blender to froth milk, there is a way that you can make it better. That is to use an attachment! Many immersion blenders come with milk frothing attachments that do an even better job at frothing your milk for you!

They still won't heat the milk as it's being foamed, but they do a slightly better job of putting air into the milk than the standard immersion blender head.

Click here to shop for immersion blenders with milk frothing attachments on Amazon!

If you already own an immersion blender and don't want another tool clogging up your kitchen drawers, then you can use it to froth milk. Just know that you will have to heat the milk first since immersion blenders do not do that while being used like frothing tools.

You will also want to pick the best container to put your milk in and be aware that immersion blenders can make a mess. Now you just have to think about what you want to try your deliciously frothed milk on first!

To learn more about using milk in your kitchen, make sure to click on the links below!

What Type of Pot is Best for Boiling Milk?

Can You Put Milk In A Keurig?

Coffee Maker Leaking From Bottom – What To Do?

How To Fix An Amana Dishwasher Door Latch In 4 Steps