Figuring out how to use the appliances in your kitchen can be challenging sometimes. Did you accidentally leave your garbage disposal on but don't know whether it's broken or needs to be reset? Well, we've done some digging and have the answers here for you.

If you leave your garbage disposal on, it should automatically shut off after a few minutes. Luckily, most garbage disposal systems will detect that they shouldn't be running and can power off by themselves, but this will require you to manually switch on your appliance the next time you want to use it.

As we begin, we will cover all things garbage disposals and discuss how to fix one if you accidentally left it on. Whether this happens often or you blanked and now don't know what to do, we're here to help. With that said, let's dive right into this topic! 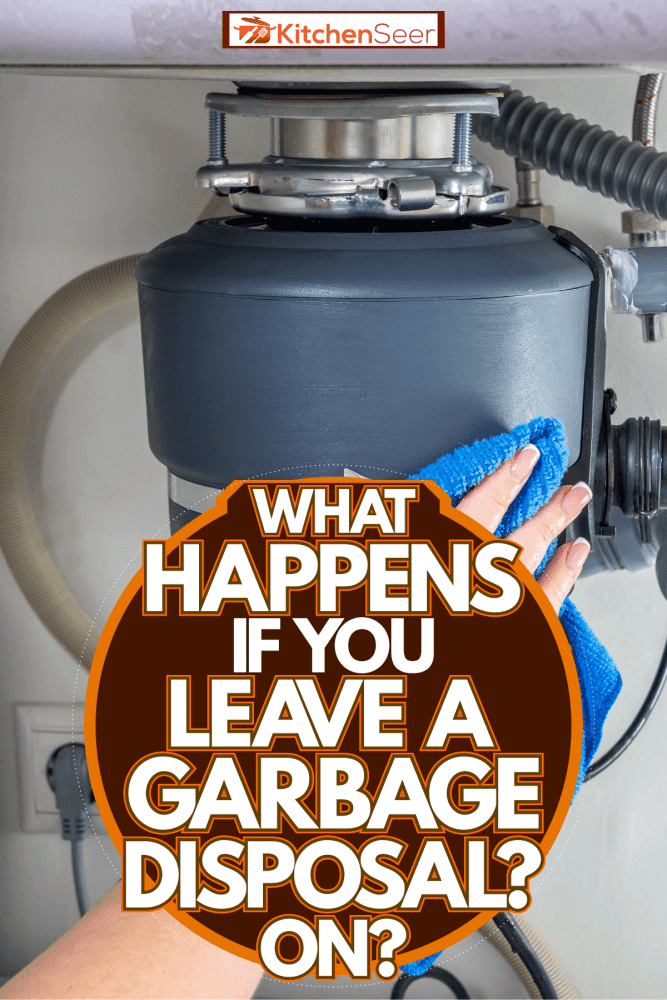 Will A Garbage Disposal Break If You Leave It On?

Leaving the garbage disposal on for too long can cause its motor to wear out over time. Doing this will often cause your system to use more energy and eventually break altogether, so we don't recommend it.

Another reason to avoid this is that keeping your disposal running for extended times can also affect its blades, causing them to become dull. 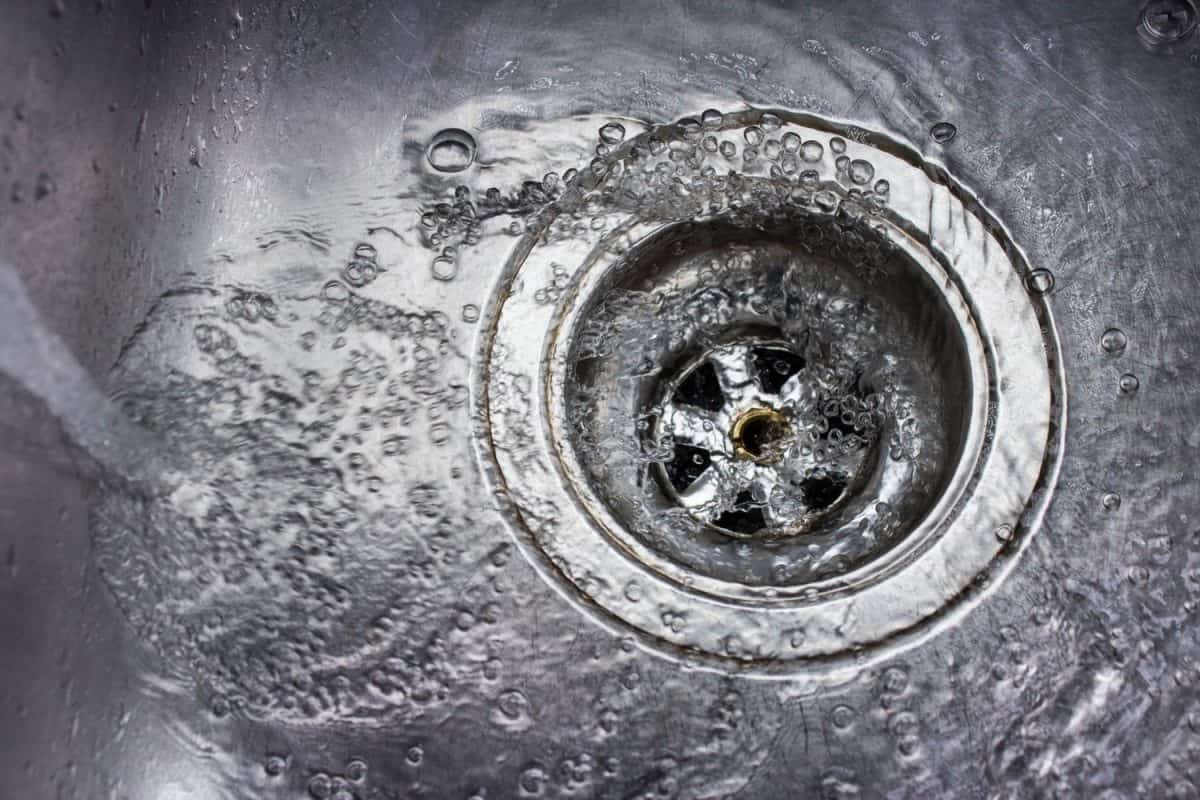 How Long Should I Run The Garbage Disposal?

Ideally, you should only run a garbage disposal for about 30 seconds at a time. This will be more than enough time to break down food scraps and send them down into the drain.

That said, if you haven't turned on your disposal in a few days and feel like there's a lot down there, leaving it on for 45 to 60 seconds won't hurt.

Does It Hurt A Garbage Disposal To Run It Without Water?

You can do some damage to your garbage disposal if you run it without water. Water essentially lubricates your disposal's blades, helping to move food through them and down into your drain.

Turning on the water while a garbage disposal is on will also aid in moving smaller food bits out of your system, so doing this is important. Again, this doesn't need to be 10 minutes with the water on, but try to keep your faucet running during the cycle.

Should I Run Hot Or Cold Water With My Garbage Disposal?

It's usually better to turn your water to cold while using the disposal. Although warmer water won't necessarily hurt your system, it can increase the chances of oil or fat clinging to your pipes.

Using cold water will keep food particles solid as they move through your garbage disposal, which is better for its blades, so try and keep the temperature down if possible. 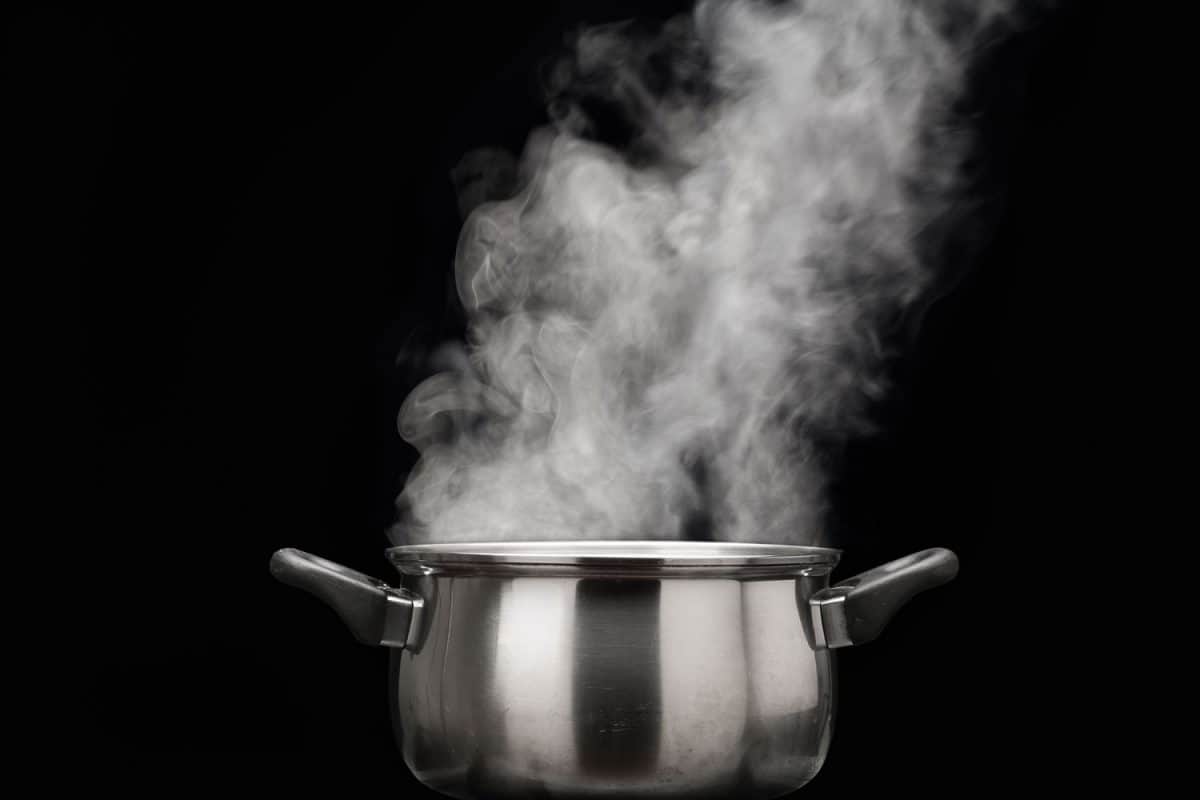 Although we don't recommend using hot water while food runs through the garbage disposal, it can help unclog one. Typically, pouring a pot of boiling water down into your disposal will break down any leftover food particles and residue on its blades, so this is a good idea to try.

We suggest using a mix of white vinegar and baking soda in your garbage disposal first, letting it sit for a few minutes, and then flushing it down with boiling water for a clog, although boiling water on its own should be sufficient.

What's The Best Way To Unclog A Garbage Disposal?

You want to try using either a mix of vinegar and baking soda or plunging your sink if a clog persists. As we mentioned above, boiling water can also help with clogging, although it won't do much good for standing water.

Another method for getting rid of a clog is to clean your garbage disposal by hand, but this will require you to disconnect it from its power source.

Can A Garbage Disposal Overheat?

Yes, a garbage disposal can overheat. You can usually tell if this is happening by listening to your appliance, and if it isn't making a humming sound, it's most likely overheated.

In general, a garbage disposal will overheat if you overfill it and trip the breaker, so be careful with how much you put down your sink's drain.

To fix an overheated appliance:

Why Does My Garbage Disposal Smell Like It's Burning?

If you notice your garbage disposal start to smell like it's burning, this could be due to the motor. Most times, this is because your system's motor or motor capacitor is burned out, hence the smell.

You might also encounter a burning smell if there is food or a hard object jammed into one of your disposal's blades, so make sure to take a good look at it before calling in a professional.

What Should You Not Put Down A Garbage Disposal? 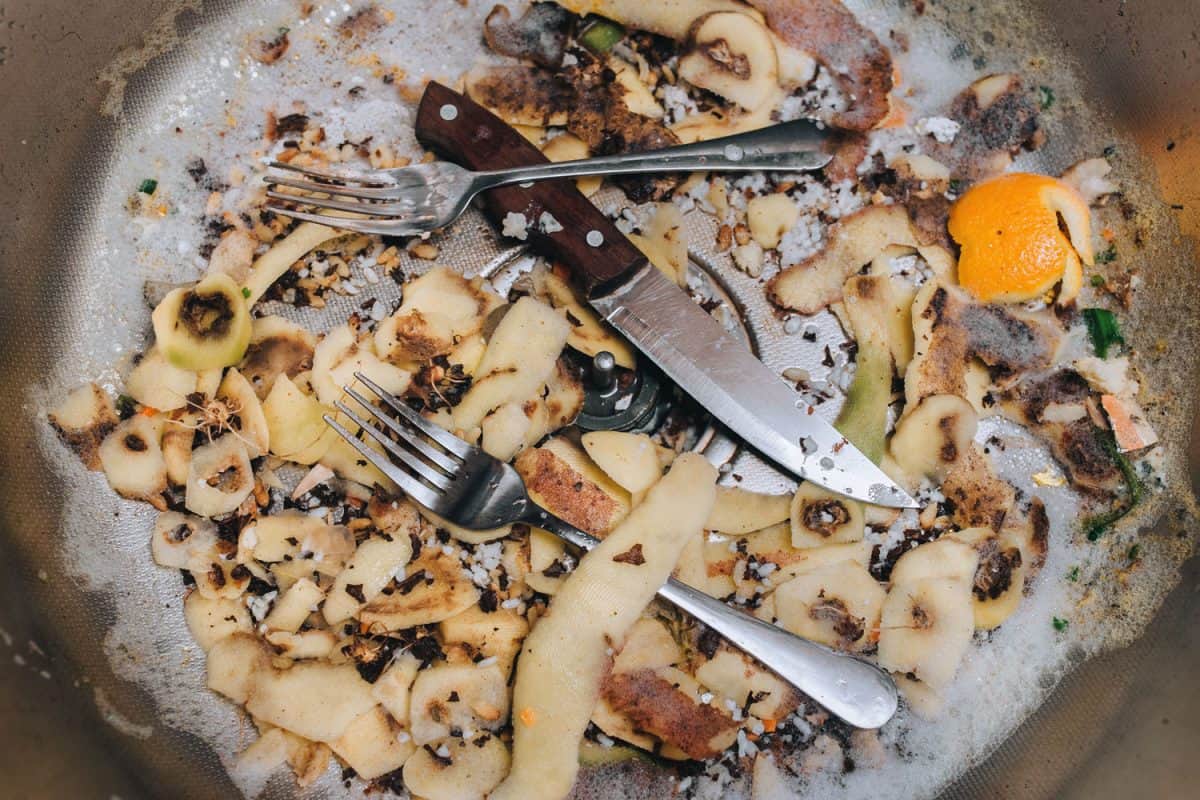 The list of things you shouldn't put down a garbage disposal is extensive. Most importantly, you want to avoid items like:

On top of these, you want to also avoid pouring harsh chemicals and cleaning supplies down your disposal, so try to keep your kitchen sink explicitly for food-related items.

Read more: Can You Put Coffee Grounds In The Garbage Disposal?

Should You Put Ice In Your Garbage Disposal?

As long as the ice isn't super hard, it should be fine to go into the disposal. Putting ice down the garbage disposal can surprisingly help sharpen its blades, so this is a good idea in moderation.

That said, you don't want to put huge shards of ice down the drain because they could harm your disposal's blades, so the smaller, the better.

Can You Break A Garbage Disposal?

Yes, it is possible to break a garbage disposal. As mentioned, running your disposal for too long can wear it down, eventually breaking it altogether, so try to keep your run times between 30 and 45 seconds.

Putting the wrong things down your garbage disposal can also cause it to break, so if it feels super hard or greasy, we recommend the trash can.

Can You Overuse The Garbage Disposal?

Like any kitchen appliance, the garbage disposal will eventually break down the more you use it. Of course, that's not to say you shouldn't turn on your disposal ever, but try not to go overboard.

That said, it's a great idea to regularly turn on your disposal for a few seconds to keep it working and rust-free, so even if you don't have food to break down, a quick cycle can be helpful. Again, it's more important to monitor your run times over the frequency you use a garbage disposal.

How Many Years Does A Garbage Disposal Last? 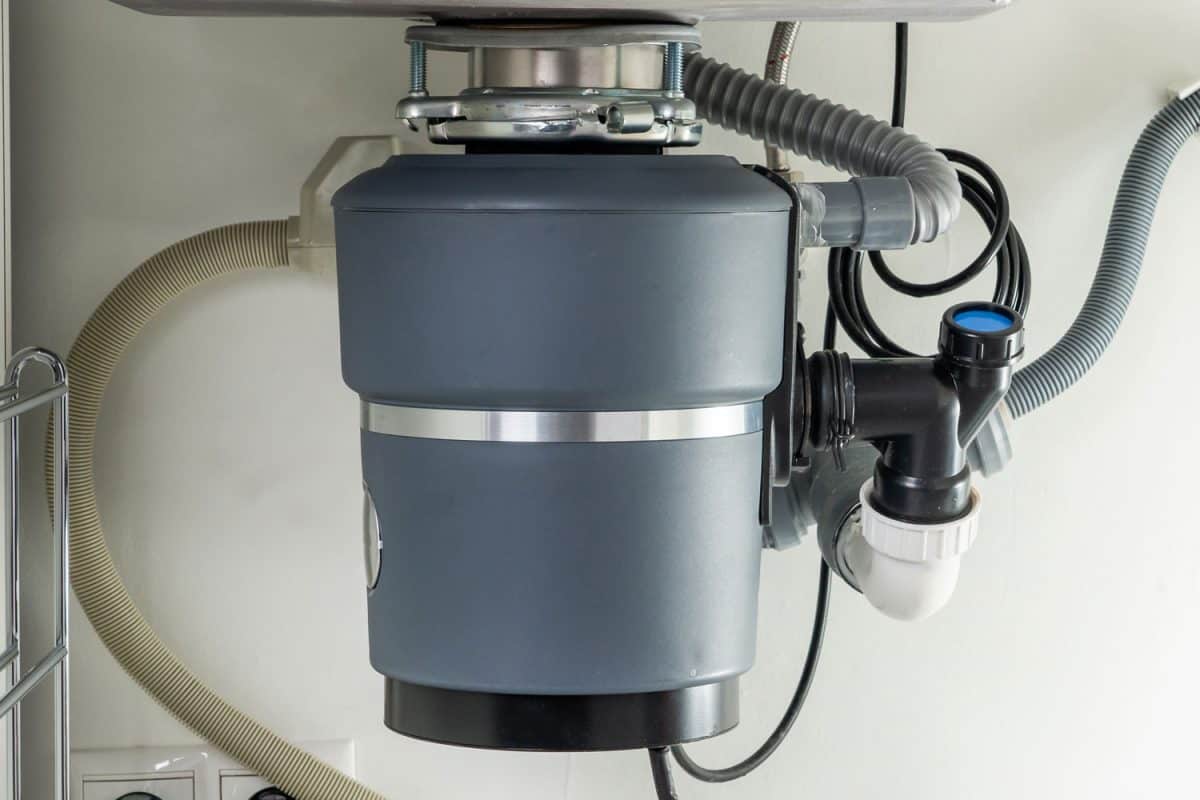 Typically, a garbage disposal will last around 10 years. That said, some higher-end systems can last a bit longer, but anything past 15 years is unlikely.

Good upkeep will ensure a garbage disposal lasts a long time, so regular cleaning and maintenance will make a difference. You also want to make sure your system is kept up to date, so if a part breaks, make sure to replace it as soon as possible.

How Expensive Is It To Replace A Garbage Disposal?

If you need to replace your garbage disposal, expect to pay between $150 and $950. Of course, this will depend on how large a system is and whether the installation requires extra labor, so pricing will vary.

If you think you can install the disposal yourself, you may be able to keep your total cost under $100, but again, this isn't always an easy process.

Are Garbage Disposals Hard To Maintain? 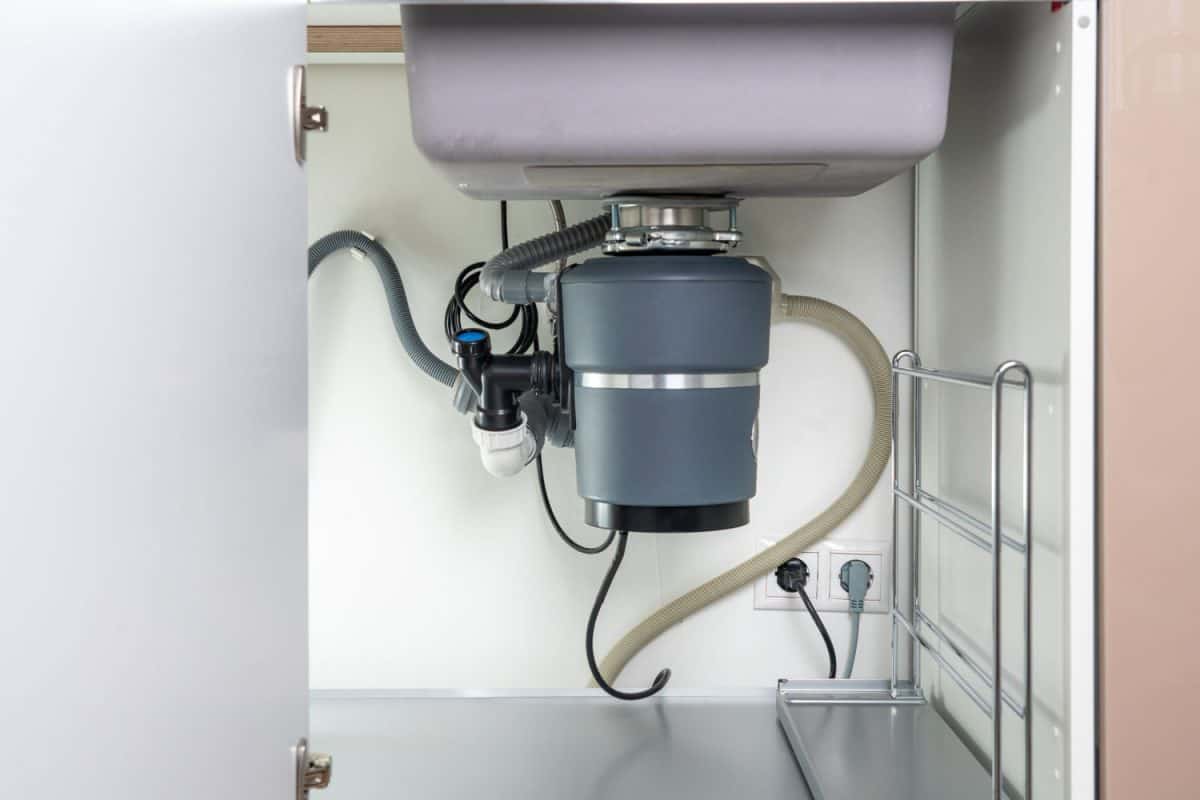 A garbage disposal shouldn't be super difficult to take care of. Most times, your system will clean itself while it's turned on, which makes everyday upkeep pretty minimal.

With that said, you want to clean a garbage disposal using a tablet or vinegar and baking soda mix regularly to ensure food residue doesn't build up on its blades.

These garbage disposal tablets remove odor-causing food residues, clean your drain, have a citrus scent, and come in a 9-pack.

See them on Amazon. 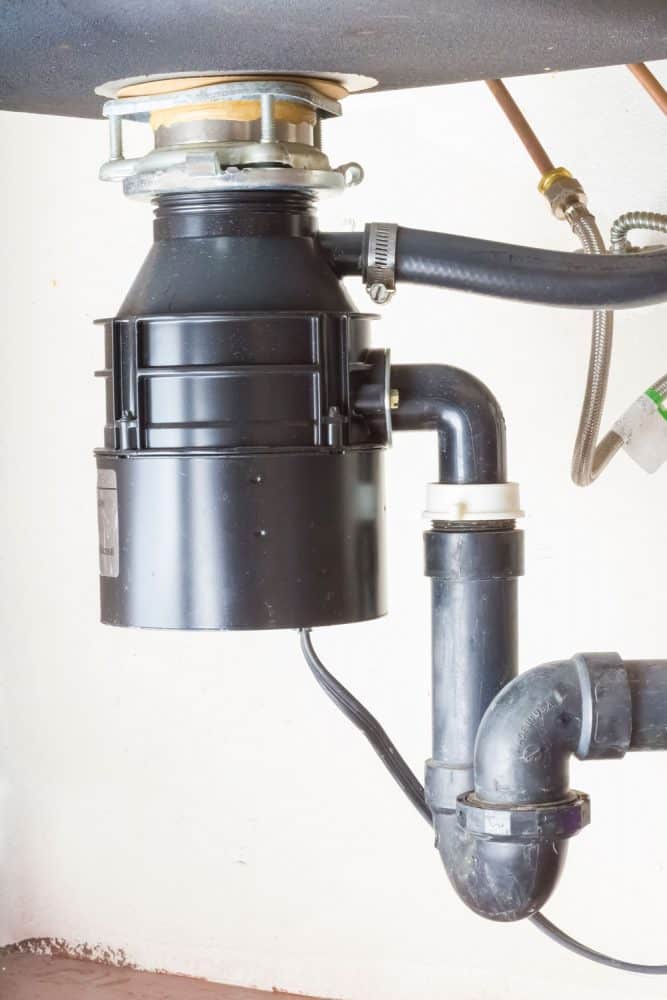 Whether you always use your garbage disposal or tend to avoid it, figuring out how to fix one can be tricky. A garbage disposal should shut off automatically if you leave it on, although this can damage it over time.

Running the garbage disposal for more than 30 to 45 seconds at a time can also wear it down faster, so try to keep your run times minimal. It's also a good idea to keep the water cold while putting food in the garbage disposal to prevent oil and fat from clinging to your pipes.

Regardless, try to clean your disposal regularly and avoid putting greasy food and harsh chemicals into your system to prevent damaging it.

Before you go, be sure to check out these helpful related kitchen posts below:

What Happens If Glass Gets In The Garbage Disposal?

How Many Amps Does A Garbage Disposal Draw? [By Horsepower]

How Much French Fries Per Person? [And How To Make Them Healthier]

Yams Vs Sweet Potatoes: Can You Substitute One For The Other?