Refried beans are a dish that is savory and could add more flavor to almost any meal! It's a Mexican delight that you can share with as many people as you want. Of course, if you're new to Mexican cuisine, there may be a time where you don't have a clue how to store them. If this situation sounds familiar, we've found how to best store refried beans.

Regardless of the type, homemade or store-bought, refried beans will last 3 to 4 days in the refrigerator. Storing them depends on your preference. For store-bought refried beans, you can leave them in a can as long as you wrap it with plastic wrap. Otherwise, place the beans in an airtight plastic container or resealable storage bag. If you want them to last longer, you can also freeze them in an airtight container to last 3 to 12 months.

Whether it's a new dish you're interested in, or you're simply looking for ways to store it, there's a lot more to know about refried beans. For example, how do you reheat them after refrigerating them? Is it safe to eat out of the can? How can you tell if it's no longer edible? If these questions interest you, keep reading ahead to find out more. 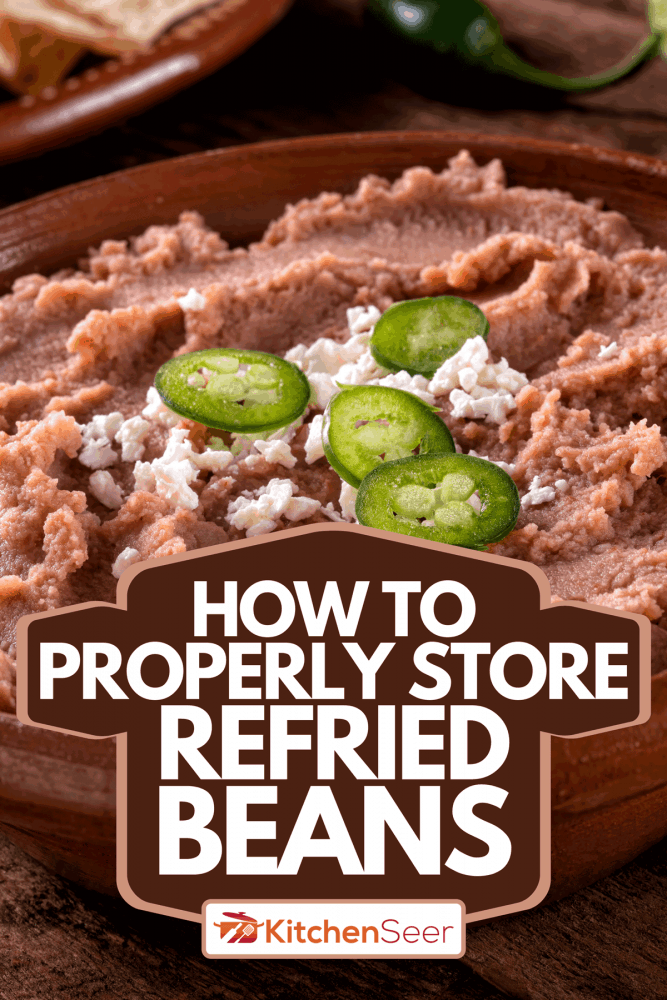 What To Do With Leftover Refried Beans?

It doesn't matter the occasion. Sometimes, we have leftovers that we don't want to throw out. In this case, we have to find out what we can do with leftover refried beans. 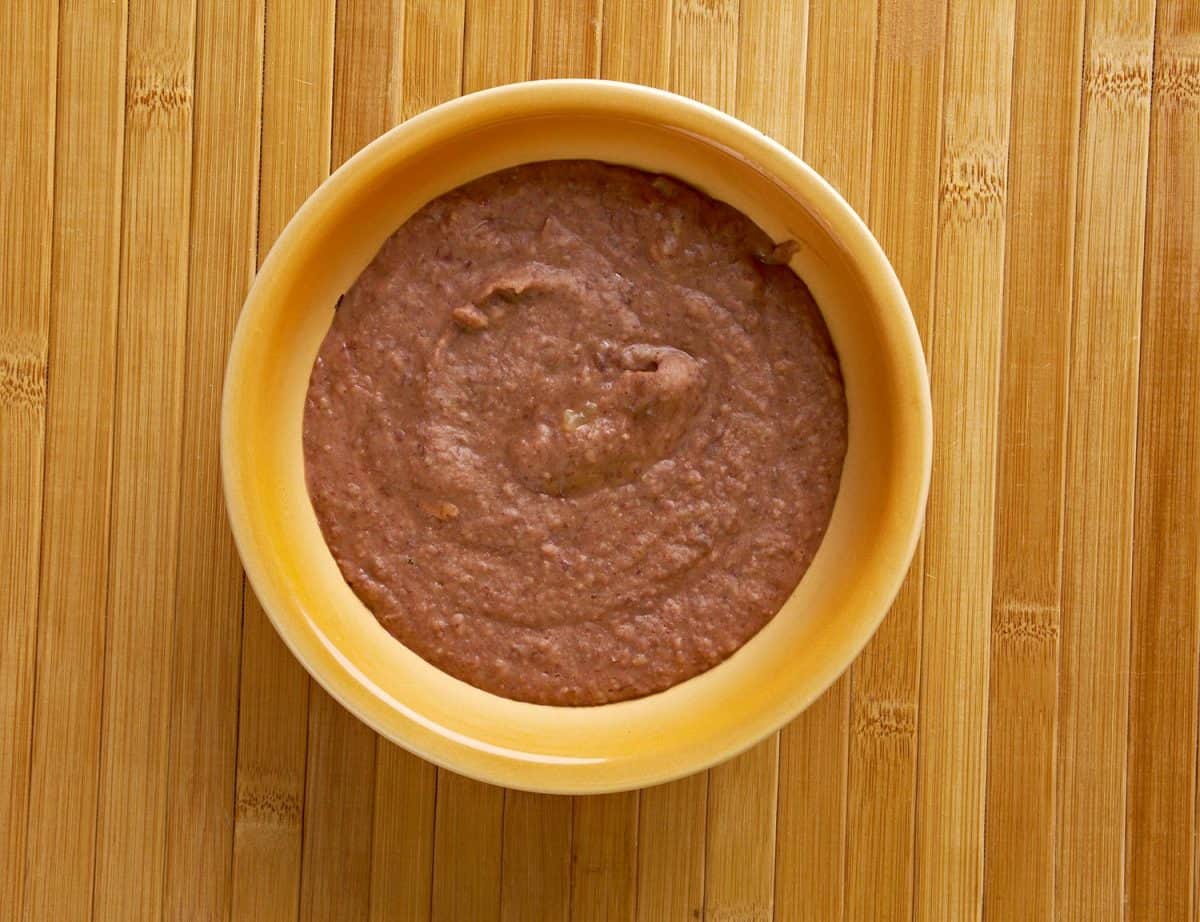 The first choice is to store the refried beans. Maybe you don't want to eat them right away. Or, you might want to save the leftovers to mix them with another meal. In either case, you'll want to know how to store them correctly.

The first option you have is to refrigerate the refried beans. If the refried beans are store-bought, you don't necessarily have to remove them from the can. You can store them in the fridge with the can they came in.

However, since the can won't have a top, you should cover it with plastic wrap. This way, you limit the number of bacteria you expose to the beans.

Of course, sometimes homemade foods are better than store-bought ones. In this case, you'll want to store the homemade refried beans in an airtight container. If you don't have one, you can also use a resealable storage bag.

How Long Can You Keep Refried Beans in the Fridge?

Like most foods, the fridge will extend the lifespan of the dish but only for a certain period. Regarding refried beans, it will last three to four days inside. After this timeframe, it's up to you to find out if the beans are still edible.

You'll know they are no longer safe for consumption by the smell. If the refried beans start to develop a strange smell after 3-4 days, it might be best to throw the beans away. However, if it smells fine, you can also try your hand at a taste test.

If they have an off-taste, throw away the beans. Likewise, if the beans show signs of discoloration, it could indicate that they're spoiling soon. Regardless of the situation, you must throw them out as soon as you deem possible.

The timeframe can vary. Refried beans can last anywhere from 3-12 months in the freezer. Of course, the less time it spends inside the freezer, the more likely it will taste better.

If you want to ensure you get the most out of the refried beans, here are a few steps on how to store them in the freezer properly:

Use the Leftovers for Other Meals

You might also be the kind of person that doesn't want any of the refried beans to go to waste. It's a delicious staple in some households. If you don't want to throw out the leftovers, you can use them to make other dishes to eat right away or later.

Since they're beans, it's impossible not to think of a dish that goes well with them! As some suggest, you can spread them on tortillas with fetta cheese, chopped tomato, onion, cilantro, hot sauce, and sour cream. If you don't want to eat tortillas, you can also use the refried beans as a nacho dip.

As another user recommends, you can spread it on tortilla chips with some cheese to make a quick nacho snack! Other suggestions include preparing a vegetarian quesadilla, use the beans in a chicken tortilla soup, tostadas, and enchiladas. As you can see, refried beans are a versatile ingredient that can be consumed alone or in combination with others.

Can You Eat Refried Beans Out of the Can? 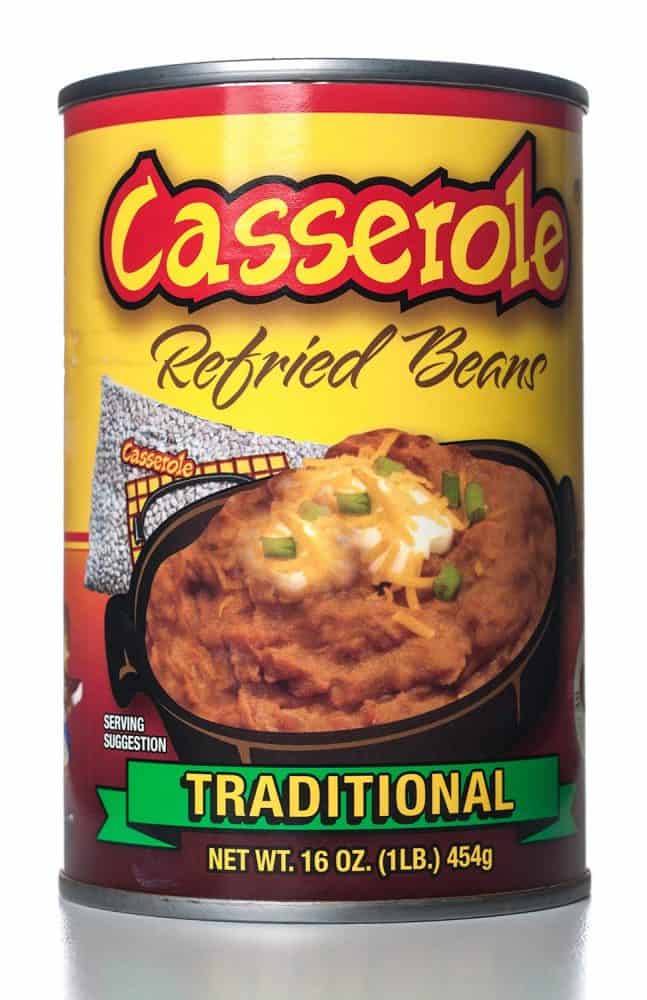 A common concern about store-bought refried beans is when you first pop the can open. Many of you might have wondered, is it safe to eat straight out of the can? Are there any precautionary steps to take before using them?

The answer is, yes, it's fine to eat refried beans out of the can. It's a possible situation because refried beans are precooked. You might've gotten that clue when you've paid attention to the name of the beans. However, the refried part of its name can be a bit misleading.

As most will infer, the refried part of its name implies the beans have been fried again. However, that's not the case. Instead, it means the beans are well-fried or intensely fried. Regardless, they probably won't taste the best right out of the can. So, you might want to heat them first!

How To Heat Up Refried Beans in the Microwave 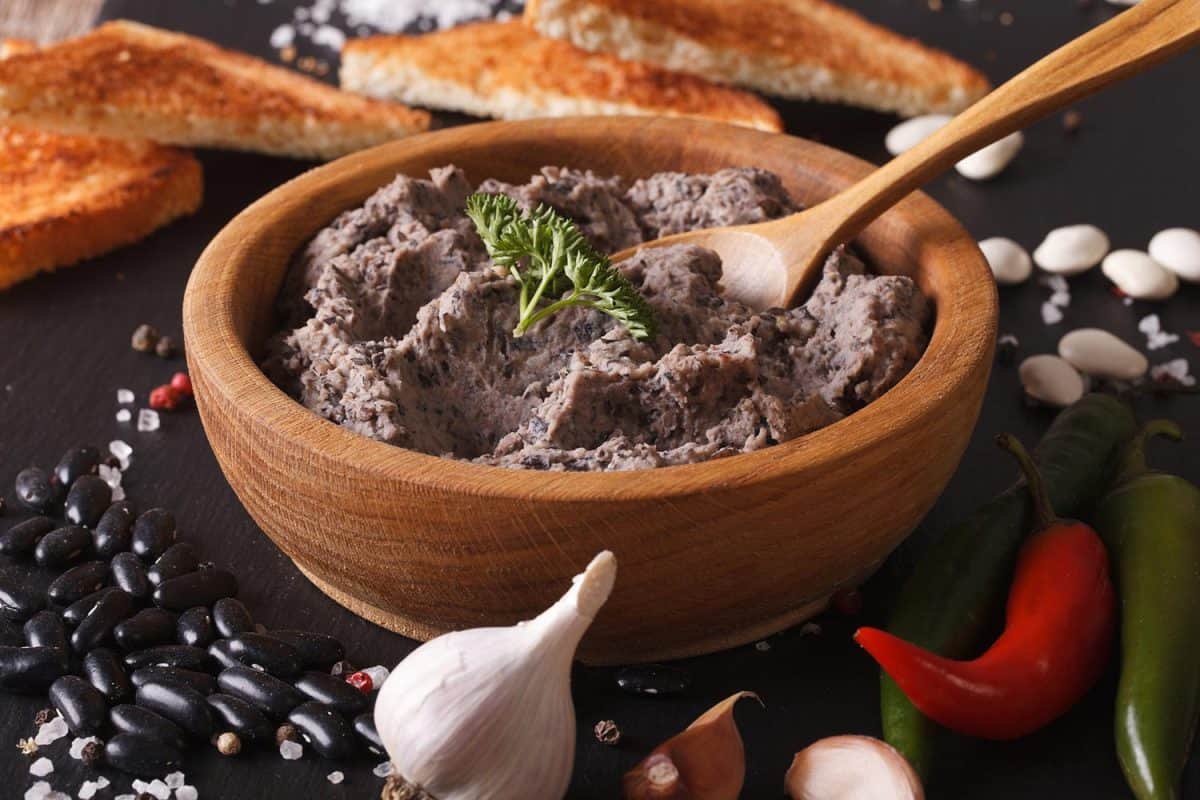 The microwave is the quickest way to reheat refried beans if you're in a hurry. It's a simple process that anyone can follow! Pop the beans on a microwave-safe plate.

One user suggests covering the plate with a paper towel. Then, heat the beans at full power in 30-second intervals. To ensure it heats throughout, stir the beans in between the pauses. Using this method will take about two minutes to heat the refried beans.

Others warn to keep a close eye on the beans if you choose to use a microwave. Since microwaves target water molecules, you'll have to make sure the beans don't dry out. If the refried beans look dryer than before, you can add a little water.

How to Heat Up Refried Beans on the Stovetop

If you want to have more control over the quality of your refried beans, using the stovetop is the best choice. Again, the process is simple. However, it requires a bit more effort.

You can pop the beans on a skillet or pan. Put it over medium heat on the stovetop. Stir the beans throughout the process. This way, you prevent the beans from sticking to the pot/skillet.

Of course, we also want to ensure the refried beans don't dry out. So, you can add one teaspoon of water or chicken broth at a time. How much you use will influence the beans' consistency. If you want the beans to be runny, add more water. On the other hand, use less water if you desire a firmer consistency.

The process should take about five minutes. Take precautions and do not boil the beans.

How Do You Reheat Frozen Refried Beans? 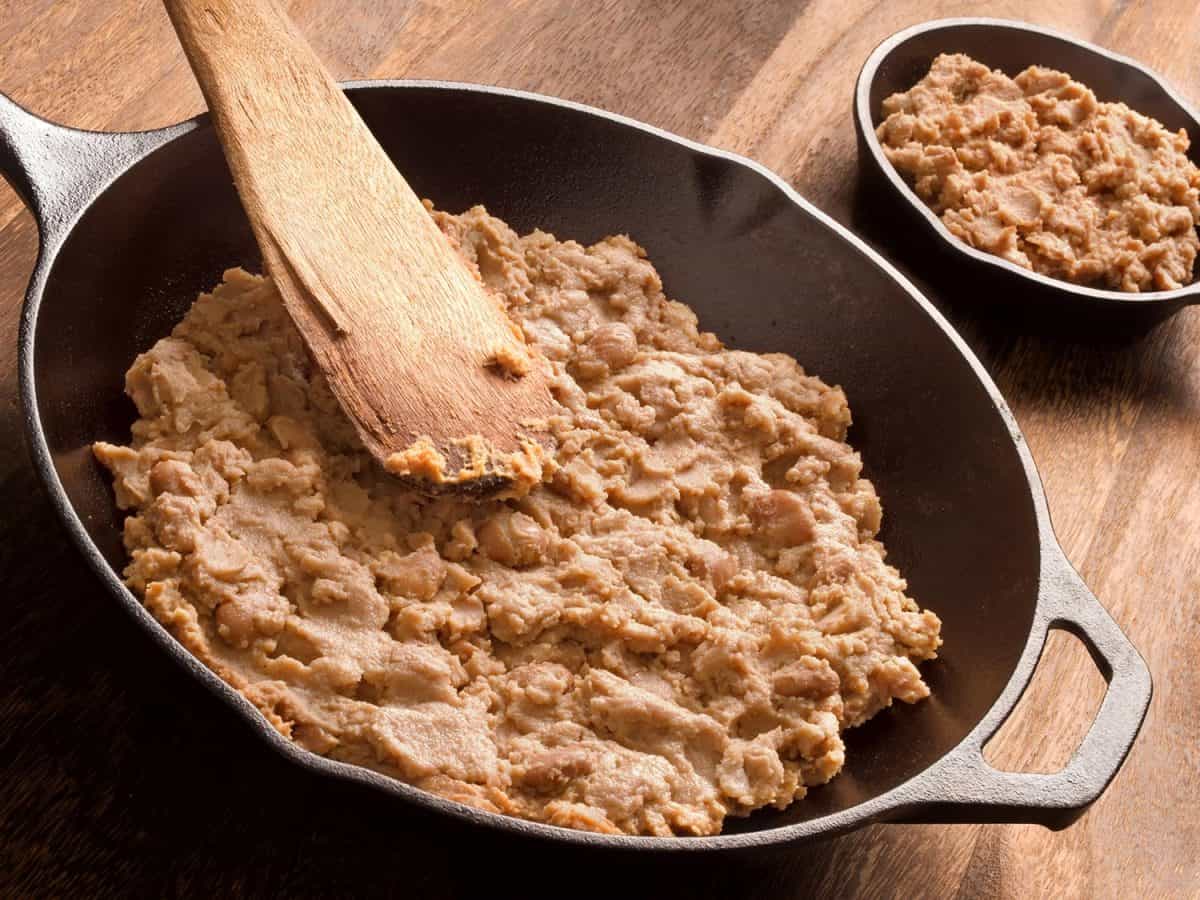 Reheating refried beans that you've frozen will require an additional step. Before reheating them, you should allow the beans to thaw for several hours. You can do this by leaving it in the fridge. Once thawed, you might notice a runny consistency. Stir the beans to get as close to the original consistency as before.

From here, you can follow the steps of reheating in the header above. Depending on how long you've left the beans in the freezer, you might also want to add some salt and spices to give it some flavor it might lack.

Learning how to store refried beans is the start of a beautiful friendship. While they might seem like they're only beans, they can complement a wide variety of dishes! So, whether you're in a hurry or preparing food for guests, refried beans can please anyone's appetite! We hope you found the information above helpful.

Before you go, would you like to learn how to store other foods? If you're wondering how to store bread, check out our post here to find out more.

Do you have some leftover cheesecake? If you'd like to learn how to store it properly, check out our post here. Until next time!

Do Tomatoes Last Longer In The Fridge?

At What Temperature Should You Bake Potatoes?