Making sure that your appliances are safeguarded against power surges is a great way to save them should the unexpected happen. But is it safe to plug your refrigerator into a surge protector or power strip? We researched the science behind this practice so you'll know for sure what you should and shouldn't do.

Any appliance with a higher power capacity, like a refrigerator, should only be plugged directly into a wall socket. You should never plug this appliance into a power strip or surge protector.

Now that we know that you shouldn't plug your refrigerator into a power strip or surge protector, we'll look at the reasons why this should be avoided. You might also be wondering what other appliances should only be plugged directly into the wall socket or how you can tell if a power strip has been overloaded. For the answers to these questions and more, read ahead in this post to see what our research has uncovered. 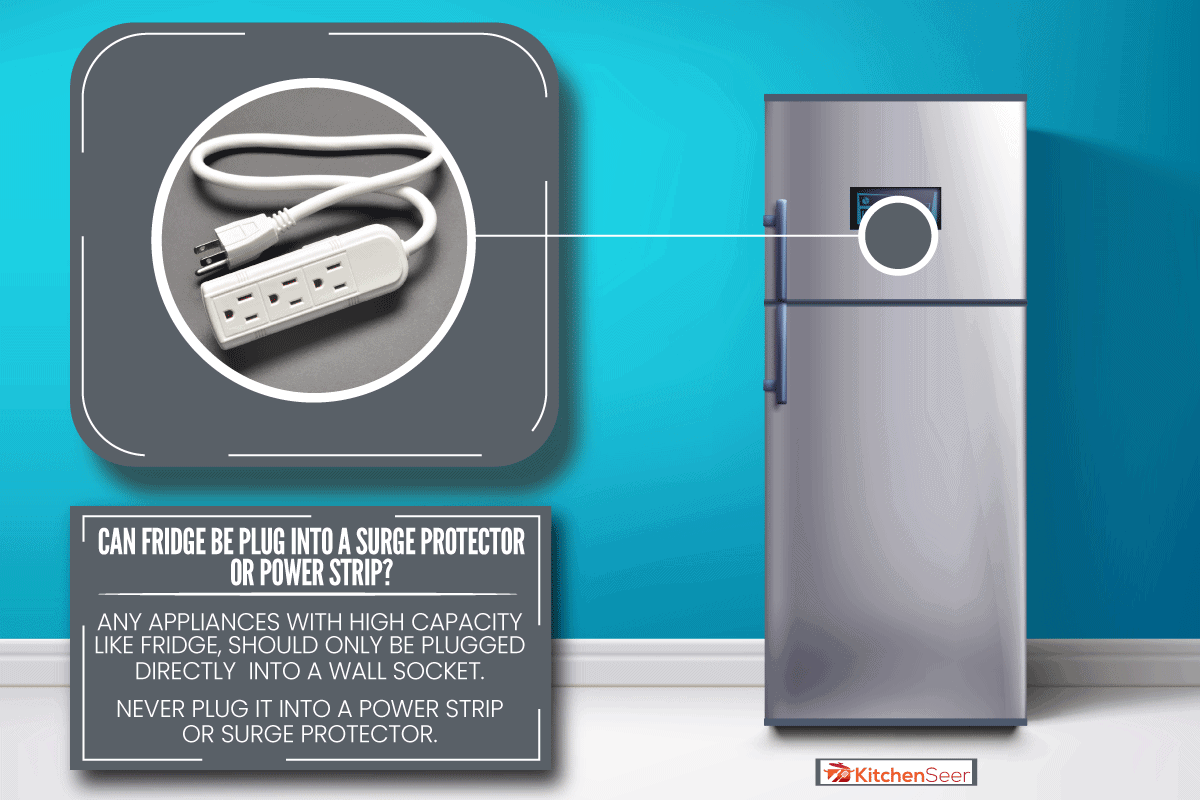 Power strips and surge protectors offer an array of advantages to homeowners. These devices not only offer protection from sudden power surges but will also give you multiple plug-ins stemming from a single outlet.

But these devices should be treated with care and should only be used according to their manufacturer's guidelines. You might be surprised to know that not everything with an electrical plug should be utilizing a power strip or a surge protector. Chief among these appliances is the home refrigerator.

There are several important reasons why you should always avoid using one of these devices for your refrigerator. 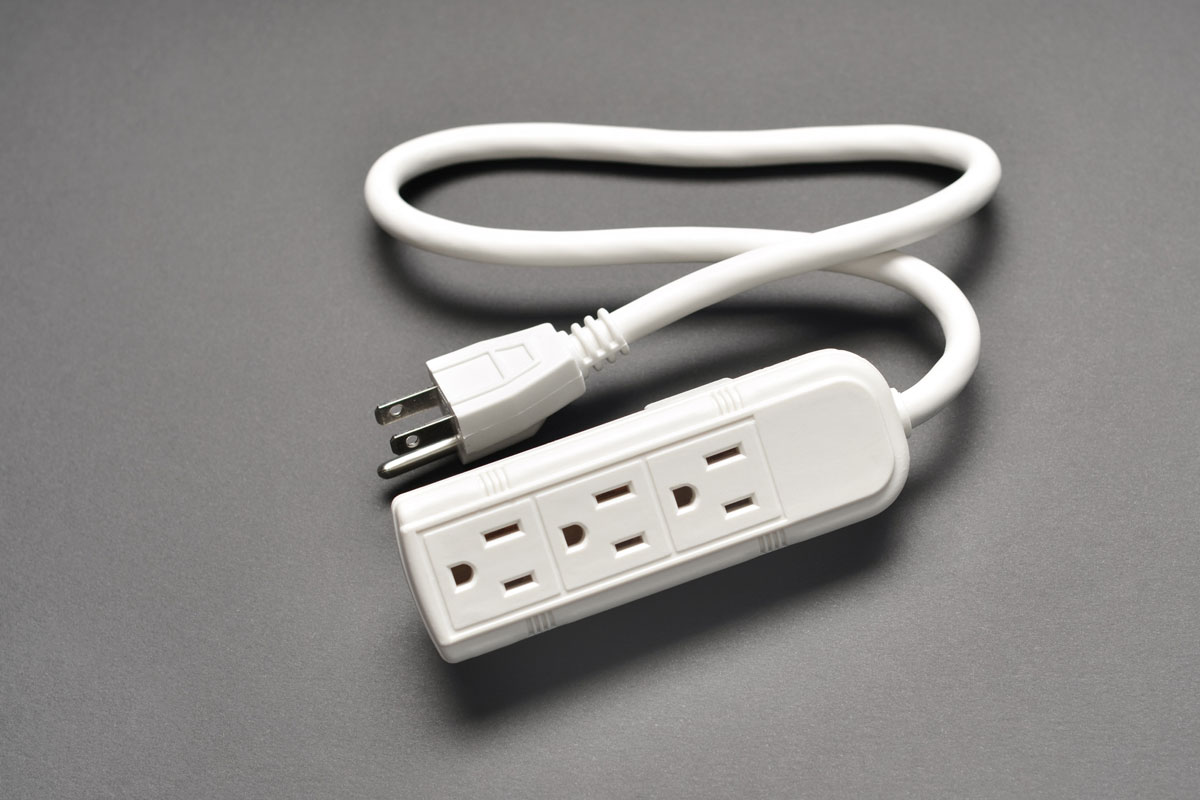 A refrigerator is built to withstand sudden surges in power. Many newer models even have built-in surge protectors as a failsafe. Plugging your unit into a surge protector won't do anything to give it any additional protection. Doing so can potentially open it up to damage.

Refrigerators don't run constantly. They will cycle off and on, triggered by the desired temperature setting of the unit and its freezer. These cycles create the need for a sudden use of electricity instead of a steady supply of it.

Power strips and surge protectors simply aren't built to handle this use of electricity. Plugging your large appliance into one of them might lead to your refrigerator not cooling enough. It can also make it cool too much, causing it to freeze liquids.

A power strip isn't meant to regulate larger appliances that require a lot more electricity. Rather than protect the refrigerator, a power strip can end up doing great damage to it.

With any type of extension cord, occasional drops in current can occur. This voltage drop can damage the compressor, rendering your appliance useless.

What Other Appliances Should You Not Plug Into A Power Strip? 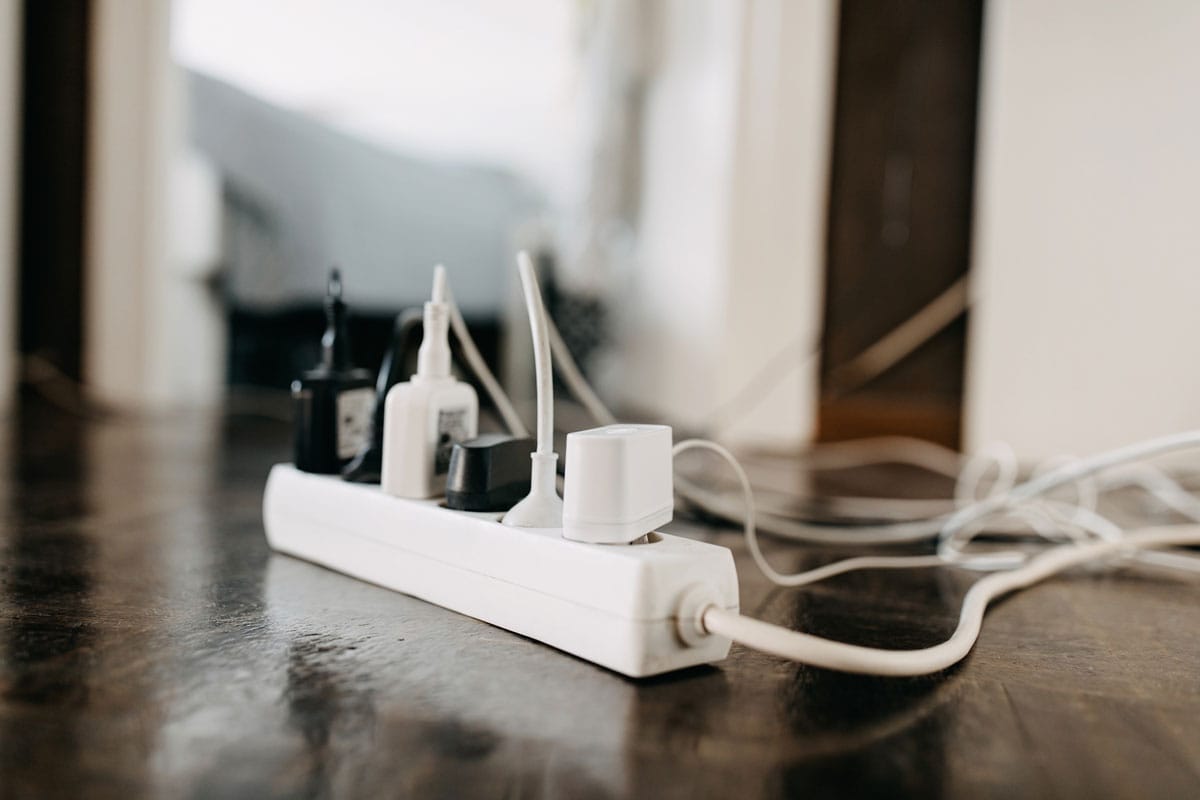 Earlier in this post, we covered the reasons why you should never use a power strip for your refrigerator. But there are other appliances that you should avoid plugging into anything but the wall socket. Let's take a look at which ones so you'll be able to keep your home safer.

Space heaters are one of the most common causes of home fires in the winter. It's not that these appliances are unsafe; when used properly, they are among the safest items in your home.

Only plug a space heater into a wall socket. And keep anything flammable away from it when in use!

The sheer amount of power an air conditioner needs to operate should tell you that a power strip is too inefficient. When these units kick on to cool a room, they use a massive amount of voltage.

Plugging your air conditioner into a power strip will overload it and increase the risk of electrical shorts. It will also make the strip transfer more power than it is built for, creating an amount of heat it wasn't meant to take. This can greatly increase the risk of a fire.

The amount of heat a curling iron will use all at once is necessary for the metal to fully heat up. But a power strip will not be able to handle this higher level of voltage.

This could damage your curling iron. It might also damage the power strip, making it pose a fire risk.

A power strip is meant to handle electronics that have rather a low wattage. A microwave will use a tremendous amount of energy when it is working. So much energy, in fact, that the power strip will not be able to handle it.

Using a power strip for a microwave will increase the risk of fire. It will also expose your appliance to damage. Like your refrigerator, a microwave should only be plugged directly into a wall socket.

Like refrigerators, small freezers and deep freezes will not run constantly. They will run in cycles, with the compressor turning on and off when desired temperatures are needed to be met. Plugging one of these units into a power strip is not only unnecessary but will pose a risk to the health of the appliance.

The compressor on these units works best if they get the supply of power directly to them when they need it. A power strip can interfere with this power supply and can damage this vital part of your freezer.

How Can You Tell If A Power Strip Has Been Overloaded?

You will want to avoid overloading a power strip. If you overwork one, it will heat up, short out, and possibly cause a fire. Thankfully, there are some telltale signs that you have worked one to its breaking point.

If it's hot to the touch, it means it's overloaded. Routinely check your power strip by placing your hand on it. If it feels pretty warm, unplug your items immediately and get a new strip. The excess heat may have damaged it, and it's better to replace it than to take any chances.

If you begin to notice that the items plugged into the strip aren't working right, it can be a sign that the power strip is overloaded.

You can also apply some simple math to see that you don't exceed its capacity. Each power strip is rated for so much amperage. By adding up the amps of each item that's plugged into the power strip, you can easily tell if it is overloaded. 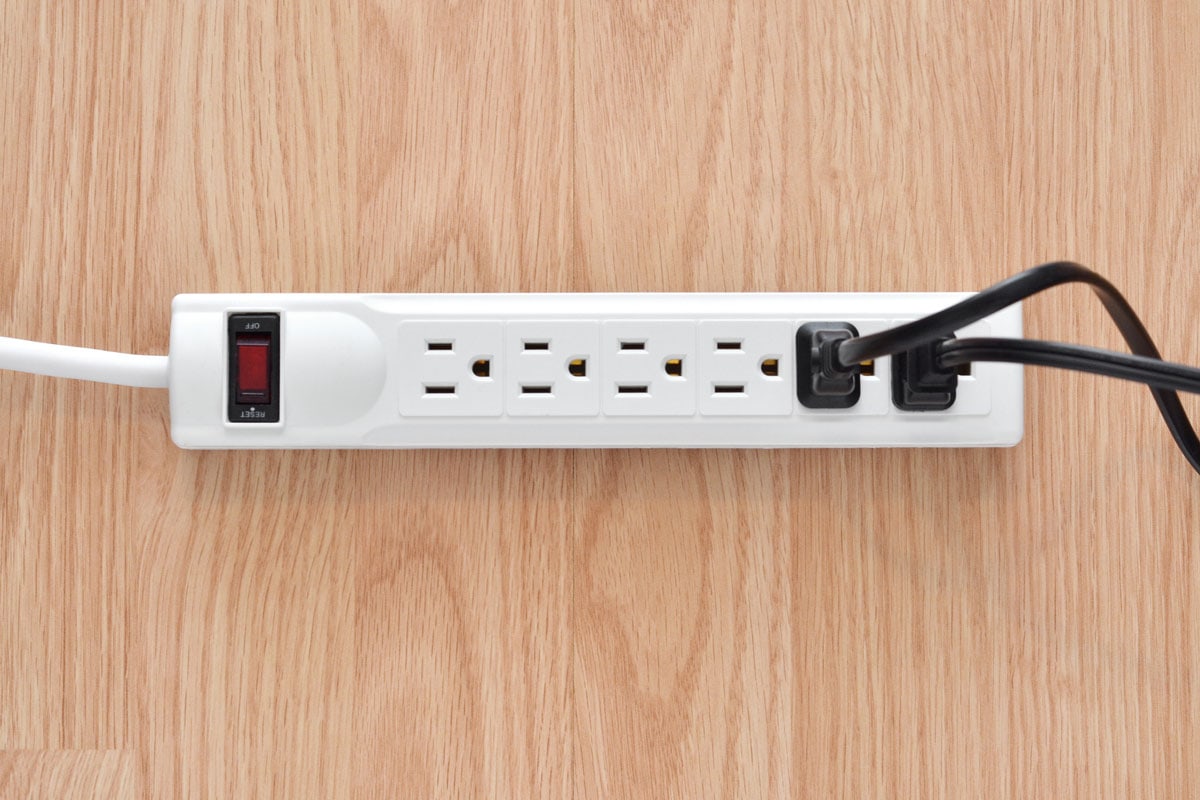 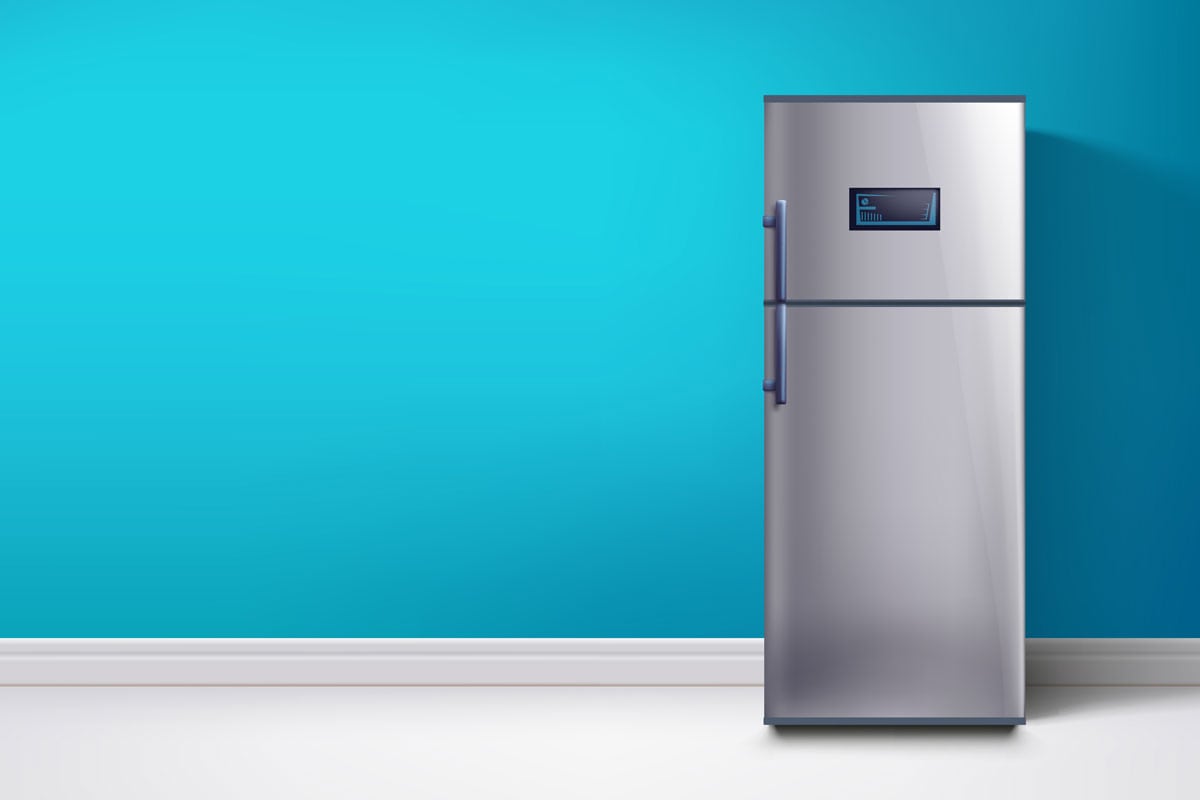 A home refrigerator will generally have its own protection against power surges and should never be plugged into a power strip. There are a good number of corded items in your home that you might be tempted to plug into a power strip, but doing so can be dangerous.

Always read the safety guide that accompanies your power strip and surge protectors so that you can protect your appliances and prevent a fire.

We hope this post on surge protectors answered all of your questions. For additional helpful information about your appliances, we suggest reading the following posts:

My Refrigerator Freezer Is Cold But The Fridge Is Warm – What To Do?

How Long Should Refrigerators Sit After Moving?

How Much Does A Refrigerator Weigh?

How To Reset A GE Ice Maker

At What Temperature Should A Samsung Freezer Be Set?

Does A Refrigerator Need A Dedicated Circuit?