A hot new look in kitchen design is the waterfall island, whose countertop continues down the ends of the structure all the way to the floor.  A waterfall island adds a sleek, ultra-modern look to your kitchen.  If you are considering installing one, you may be wondering where to put its electrical outlets.  You can't place them on the ends -- as on a traditional kitchen island -- without ruining the smooth, flowing effect.  So, where should you locate the outlets on your waterfall island?  We've done the research, and we have the solutions for you!

The National Electrical Code (NEC) requires all kitchen islands measuring at least 24" long and 12" wide to have a minimum of one GFCI outlet.  No point on the countertop may be more than 24" from an outlet. So, an island 25" to 48" long requires two receptacles; 49" to 72" requires three; and so on. To meet these requirements while maintaining the sleek look of waterfall islands, designers have come up with creative placements for outlets, such as:

There are many factors to keep in mind, including appearance, functionality, and, of course, safety.  Read on, and we'll explain more about waterfall islands, where to put (and where NOT to put!) outlets on them, and how to conceal or camouflage the outlets to maintain your waterfall island's sleek appearance. 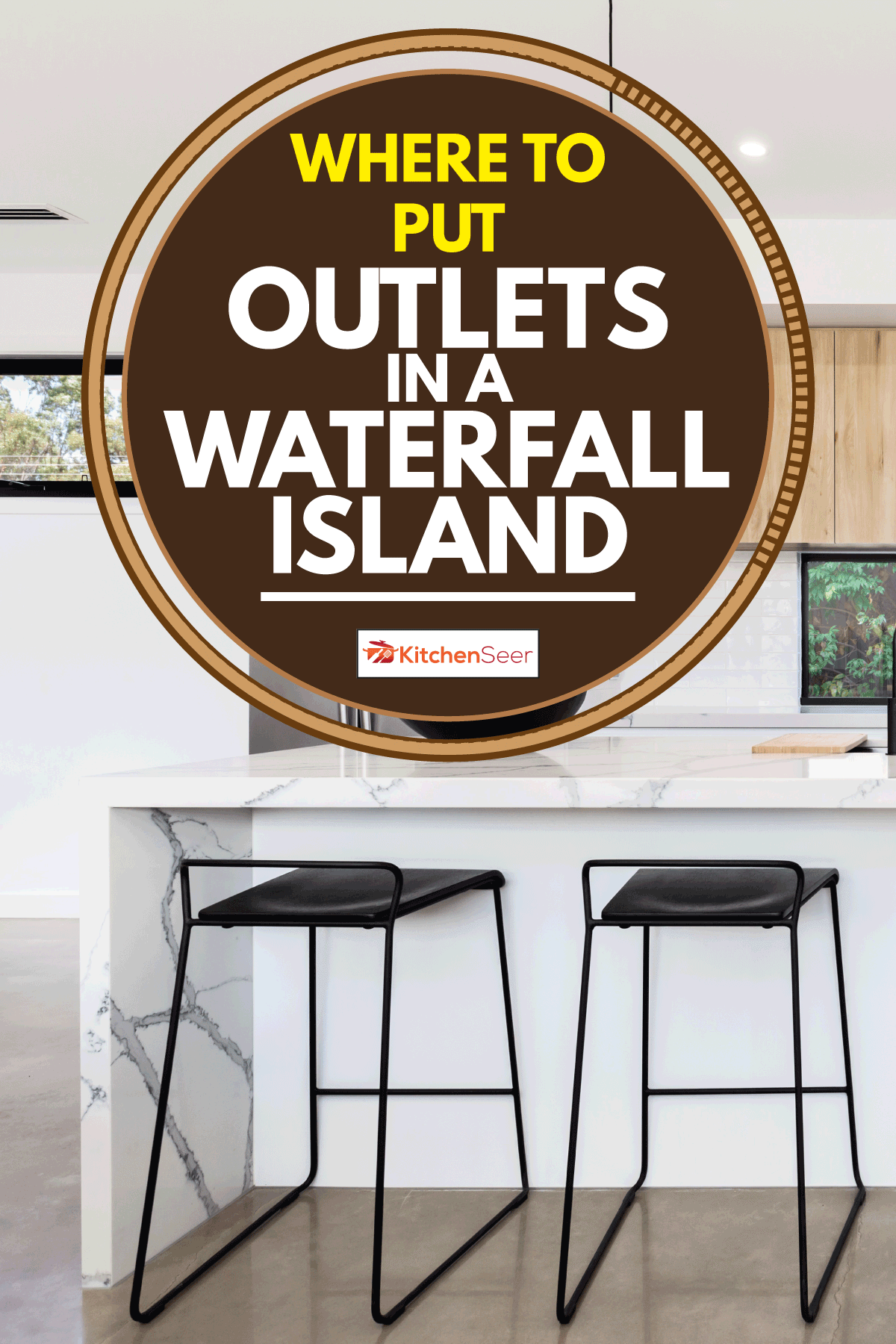 What Is A Waterfall Countertop?

Waterfall countertops came into fashion less than a decade ago.  Currently, they are all the rage in high-end, ultra-modern kitchen design.  Instead of just a flat surface that stops at the edge of the cabinetry, a waterfall island's countertop flows down the ends of the island to the floor. Waterfall countertops are all about appearance -- so they are usually made of striking, high-end materials such as quartz, marble, or granite. 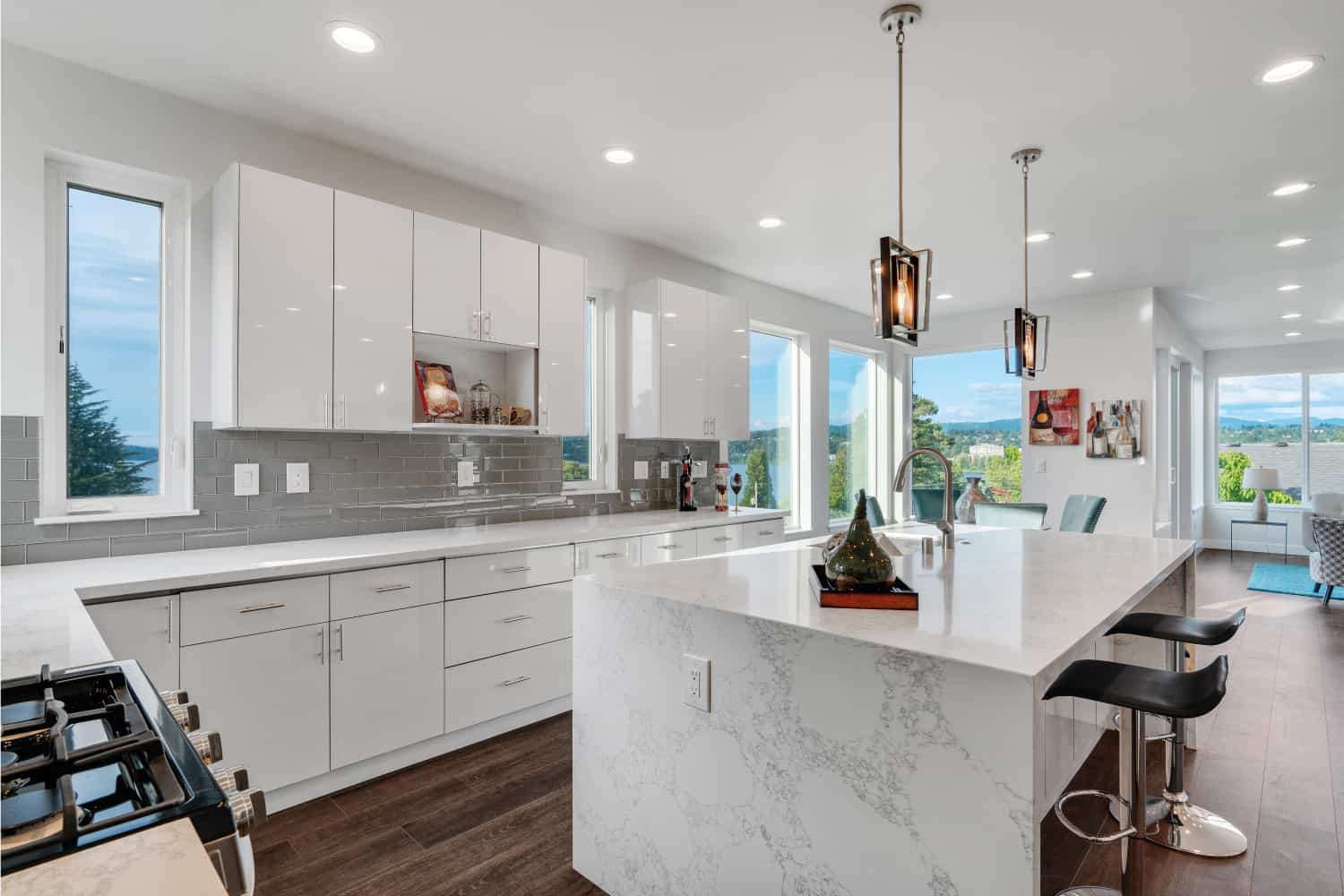 A waterfall island countertop can conceal cabinetry, barstools, or even an appliance.  It makes a dramatic statement visually connecting the countertop, cabinets, and flooring.  It also provides a seamless transition between kitchen and living space.

Do You Have To Have Electrical Outlets In A Kitchen Island?

Section 210.52(C)(2) of the National Electrical Code (NEC) lays out the minimum standards for electrical outlets in a kitchen island.  There are three major requirements:

These rules are safety measures that ensure that circuits are not overloaded by having too many devices plugged into them and avoiding having long stretches of electrical cord running exposed on the floor or countertop.

How Do You Hide An Outlet In A Kitchen Island?

The electrical outlets in your island should be functional and accessible without calling attention to themselves or otherwise detracting from your kitchen's overall design.  This is particularly true in a waterfall island, which should always look sleek and smooth.  Designers decide where to place outlets in kitchen islands using the principle of Three C's:  conceal, camouflage, or complement.

Concealing electrical outlets from view is the ideal strategy.  In a traditional island, receptacles can be hidden on the ends by recessing them behind trap doors that pull down to access the outlets.  However, cutting trap doors into your waterfall counters would destroy their sleek appearance.  Instead, outlets in waterfall islands are usually concealed by attaching a thin power strip to the top rail of the cabinetry, just below the countertop's lip.

Click here to see this under-counter power strip on Amazon.

Sometimes it is not practical to conceal the electrical outlets on a kitchen island: if, for example, there is no countertop lip overhanging the cabinetry.  In these cases, receptacles can be camouflaged.  The most popular way to do this in a waterfall island is to install pop-up receptacles in the counter's top surface.  These pop-up outlets typically have sleek metallic covers that complement the polished stone of the countertop.

Another option for camouflaging electrical receptacles is to place them behind a 3" vertical filler at one or both ends of your cabinetry.  Add custom-made covers that match the cabinetry, and the outlets will blend in and be virtually invisible.

Sometimes it's best to make a bold statement and attract attention with outlet covers that complement your kitchen decor.  For example, in a glossy-black-and-steel kitchen, you might choose stainless steel outlet covers and light switch plates to create a high-tech feel.

Where Not To Put Outlets In A Kitchen Island

There are a few places where you should never put electrical outlets for the sake of safety.

Placing outlets, even covered ones, on the kitchen floor is prohibited by code in most areas.  It's unsafe because even a small spill could result in water getting into the wiring, creating a serious fire hazard.

Although most building codes allow placement of electrical outlets in the toe kick of kitchen islands, there is still some risk that liquid and/or crumbs will make their way inside.  Also, because islands are 36" high, outlets in the toe kick will be more than 24" away from any point on the countertop -- so you will still need to install additional outlets higher up to meet code requirements.

Ten years ago, installing charging stations in the drawers of cabinets and desks was a popular way of getting chargers and cords out of sight.  However, heat can build up in these small, enclosed spaces, posing a fire hazard.  Also, an electrical fire that starts within a drawer can burn unnoticed for much longer than a fire at a wall outlet.  Unfortunately, some manufacturers are still selling drawer-enclosed charging stations.  But increasing numbers of municipalities are changing their building codes to prohibit them.

The electrical outlets in your waterfall island can be placed in ways that don't detract from its sleek appearance.  You can conceal them by placing a power strip under the countertop's lip or camouflage them by installing pop-up outlets in the countertop.  Or you can recess them behind vertical filler strips in the body of your island's cabinetry.  Whatever option you choose, always think safety first: don't put outlets in the floor, the toe kick, or inside drawers.  Follow the guidelines above, and you can have a waterfall island that is beautiful, functional, and safe!

You may also enjoy:

What Should Seams in A Granite Countertop Look Like?

Granite Refinishing – How To Get Countertops To Shine Again?

Should You Microwave A Sponge? [And How Often To]

How To Clean A Microwave’s Grease Filter

Can You Beat Eggs In A Food Processor? [Here’s How To]