Like other plastics, cling film is only heat resistant to a point. So, at what temperature will cling film melt? This is important to know when it comes to food storage. And for your convenience, we did the research to bring you an answer.

Cling film will melt at temperatures ranging from 220-250 degrees Fahrenheit. It's best to let your food completely cool before covering it with cling film to prevent the film from melting and sticking to your food. In addition, avoid using cling film when cooking food in the oven, microwave, and stovetop, as the heat will cause the film to melt and stick to your food.

There are times when cling film is great to use in the kitchen. In this article, we will discuss when and when not to use cling film. In addition, we will answer other frequently asked questions about cling film, so read on!

How Heat Resistant Is Cling Film?

Cling film, also known as Saran Wrap, plastic wrap, or cellophane wrap, is a thin plastic film that is used to wrap food. It is great for keeping food fresh and preventing it from drying out.

Since cling film is plastic, it will melt at high temperatures. The melting point of cling film is between 220-250 degrees Fahrenheit.

With that said, cling film shouldn't be used as a cover when cooking. This includes an oven, microwave, and stovetop. You will be left with a melted and sticky mess if you do. Instead, use aluminum foil, as it can withstand high temperatures.

In addition, before using cling film to refrigerate or freeze food, make sure that the food is completely cooled first. Otherwise, the heat from the food will cause the cling film to melt and stick to your food.

If it's a hot summer day, even in the shade, cling film can break down. So, it's best to use a cooler or insulated bag instead.

When cling film melts, it can release harmful chemicals into food. These chemicals can leach into your food which isn't good for your health.

With that said, the cooler the temperatures, the better when using cling film. 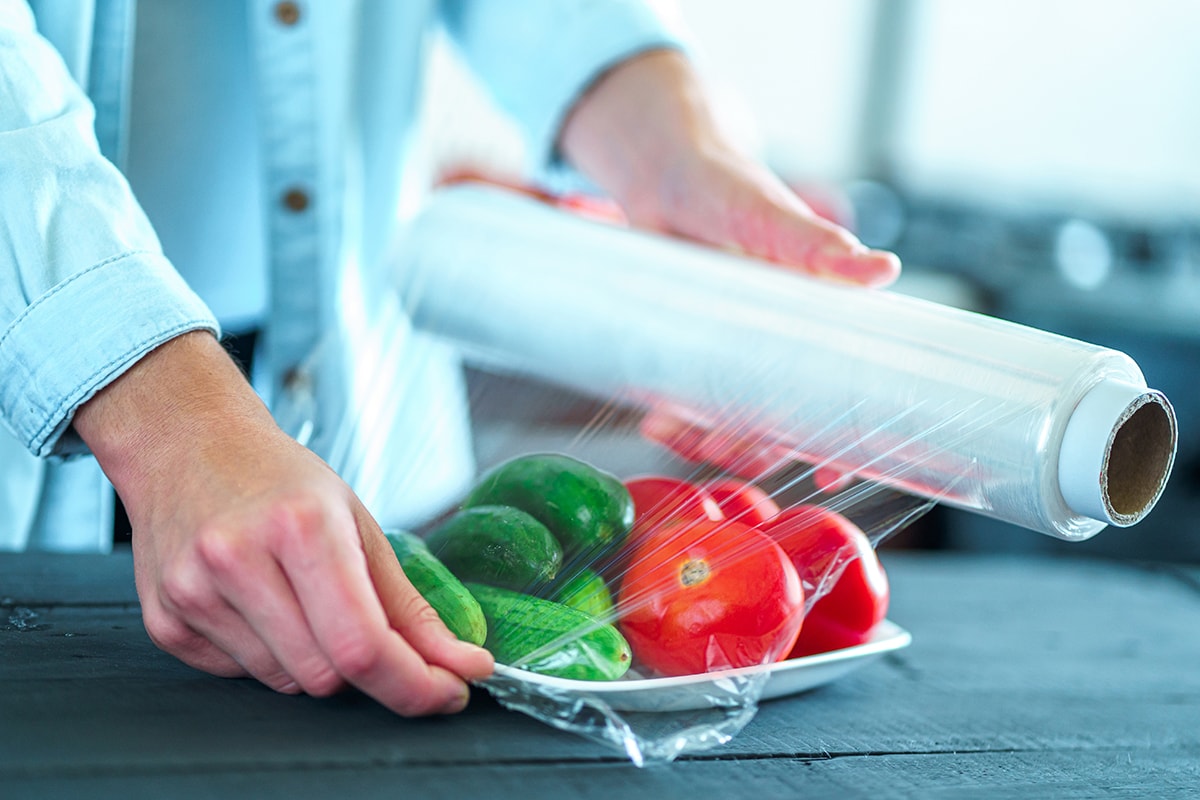 Can Cling Film Be Used As A Liner In A Slow Cooker?

Depending on the temperature you cook at, you may be able to use cling film as a liner in a slow cooker.

Cling film can be used as a liner in a slow cooker if you cook at low temperatures below 200 degrees Fahrenheit. However, it's better to use a liner meant for slow cookers. If you don't have a slow cooker liner, you can opt for aluminum foil.

Is It Better To Use Cling Film Or Aluminum Foil? 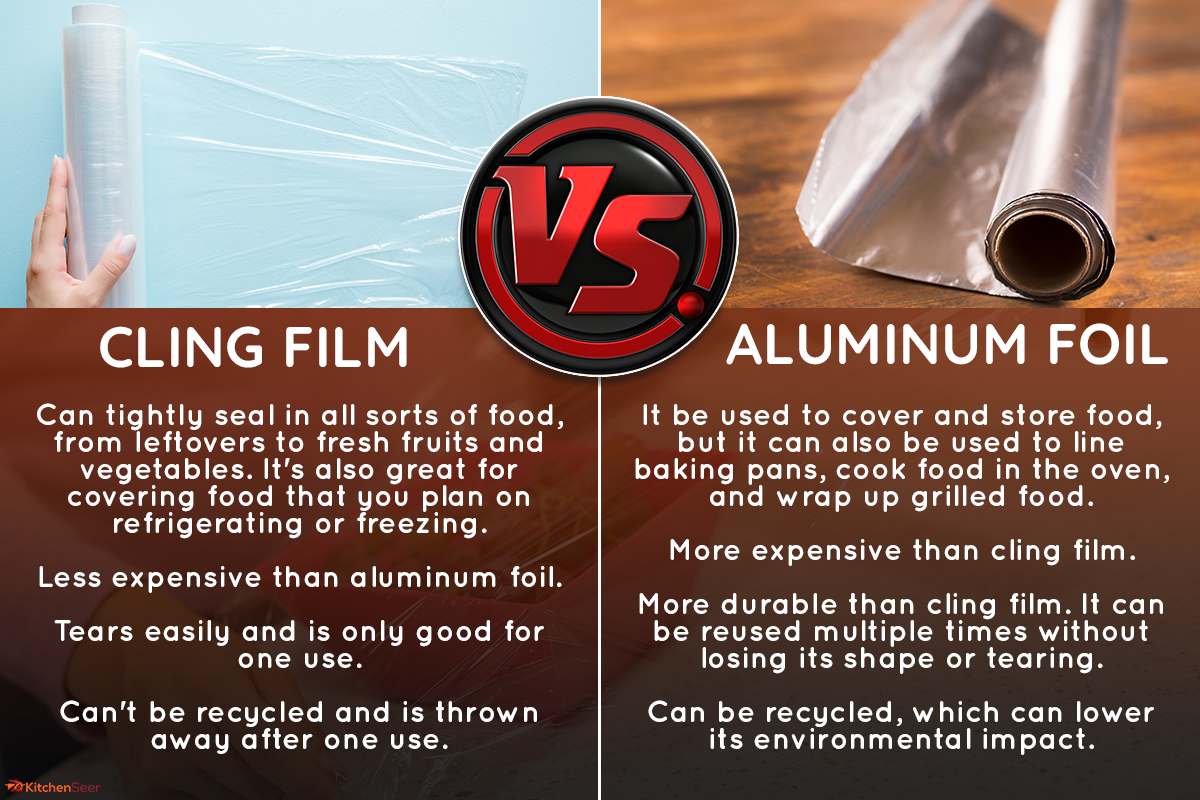 In many kitchens, you will find either cling film or aluminum foil, and sometimes both. But which one is better to use? Let's take a look below.

When it comes to versatility, aluminum foil has more uses. Not only can it be used to cover and store food, but it can also be used to line baking pans, cook food in the oven, and wrap up grilled food.

As mentioned earlier, due to its low melting point, cling film shouldn't be used to cook food. It's best suited for covering and storing food. 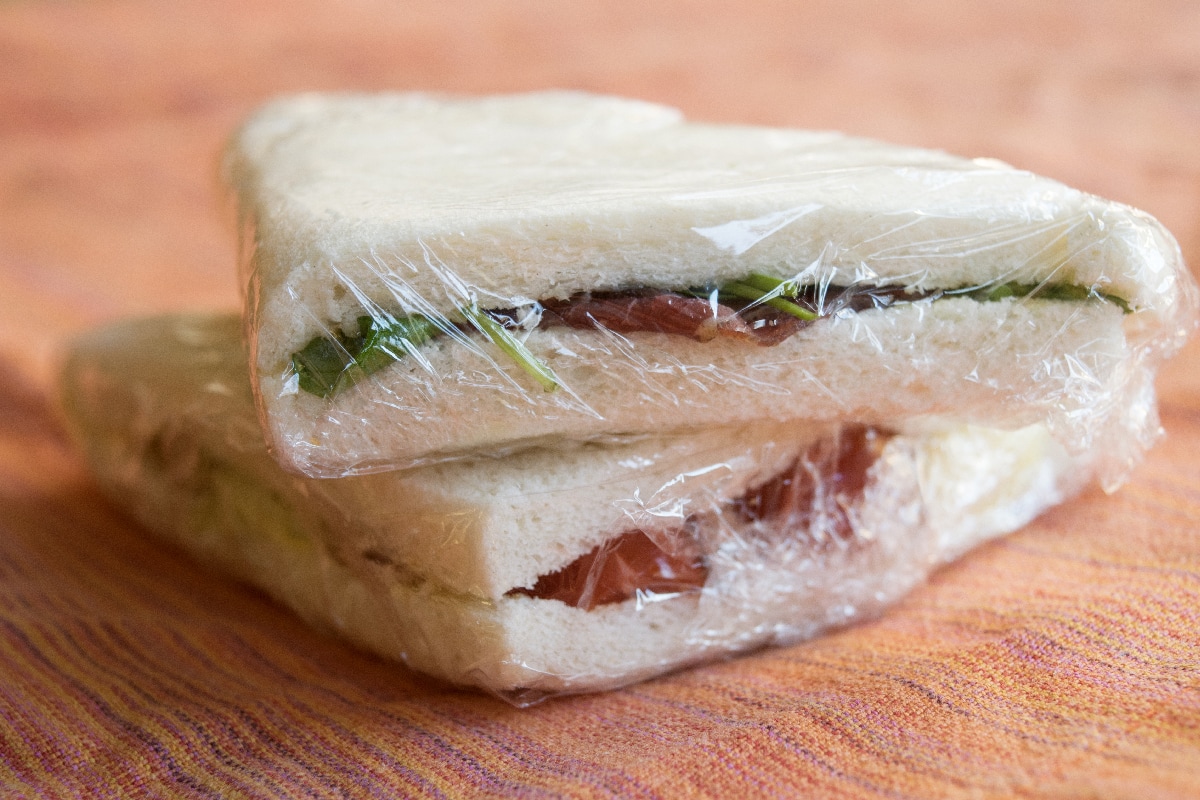 There is a reason you see plastic being used for food storage more often than aluminum foil. Cling film does a great job of sealing in food and keeping it fresh.

Cling film can tightly seal in all sorts of food, from leftovers to fresh fruits and vegetables. It's also great for covering food that you plan on refrigerating or freezing.

Aluminum foil isn't as good at sealing in food. When you use it to cover a dish, there is a chance that air will get in and dry out your food.

In addition, if you are storing acidic food, cling film does a better job. Acidic food and aluminum foil can cause a reaction that will cause your food to taste metallic.

So, if you are looking for the best way to store your food, cling film is the way to go.

In general, aluminum will be more expensive than plastic. So, when you shop for a roll of either, you will most likely spend less on cling film. For budget shoppers who just want something to cover their food, cling film is a great option.

However, if you are looking for something that is more versatile and will last longer, aluminum foil is the better choice. You can get multiple uses out of one roll of foil, whereas with cling film, you will have to replace it more often. 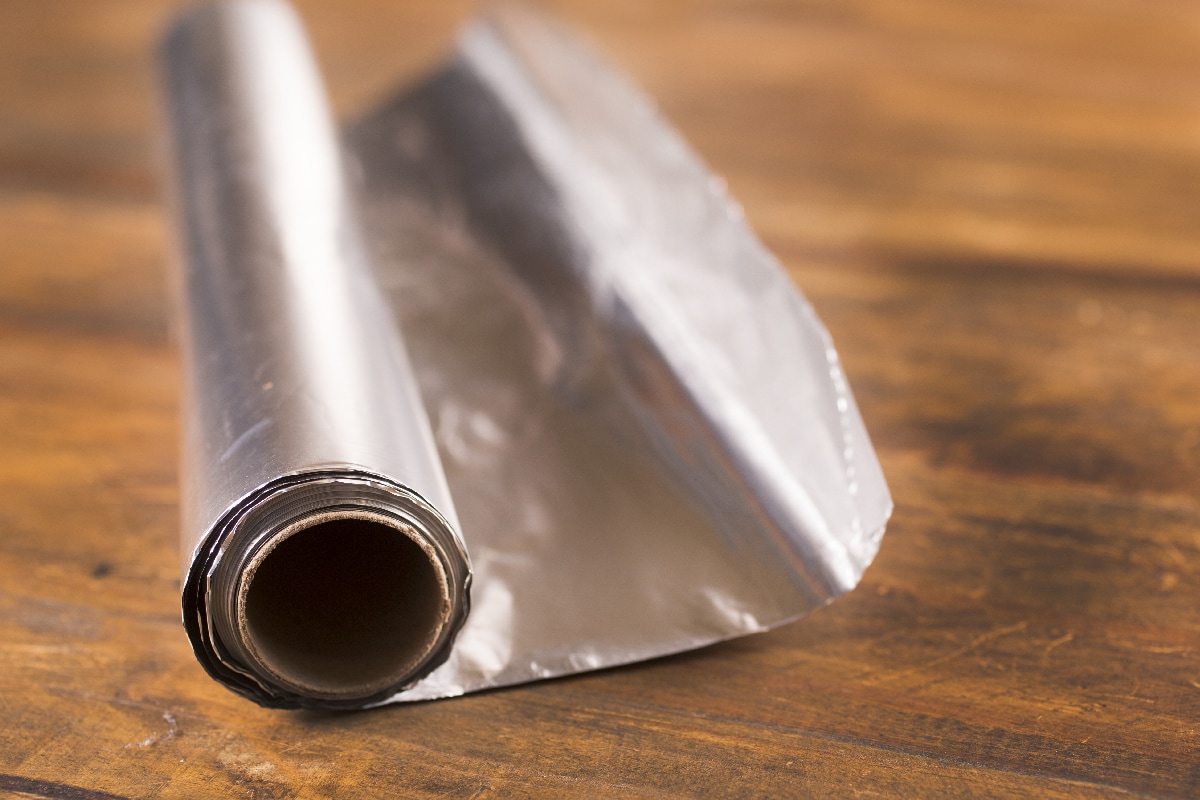 Aluminum foil is more durable than cling film. It can be reused multiple times without losing its shape or tearing. Cling film, on the other hand, tears easily and is only good for one use. Once you use it, you will have to replace it.

In addition, if you store food in the freezer with cling film, it's more likely to tear. Aluminum foil can withstand the cold temperatures of the freezer better.

The debate on whether plastic or aluminum is worse for the environment is a heated one.

On the one hand, plastic takes centuries to decompose. On the other hand, mining aluminum can have a negative impact on the environment.

Nonetheless, aluminum foil can be recycled, which can lower its environmental impact. Cling film, on the other hand, can't be recycled and is thrown away after one use.

So, if you do use aluminum foil often, be sure to recycle it to lower your environmental footprint.

When it comes to aluminum foil vs. cling film, both have their benefits and drawbacks. It really depends on your needs as to which one is better for you.

If you need something for everyday food storage, then cling film is a great option. However, aluminum foil is the better choice if you are looking for something more versatile and durable.

What Is The Best Alternative To Cling Film? 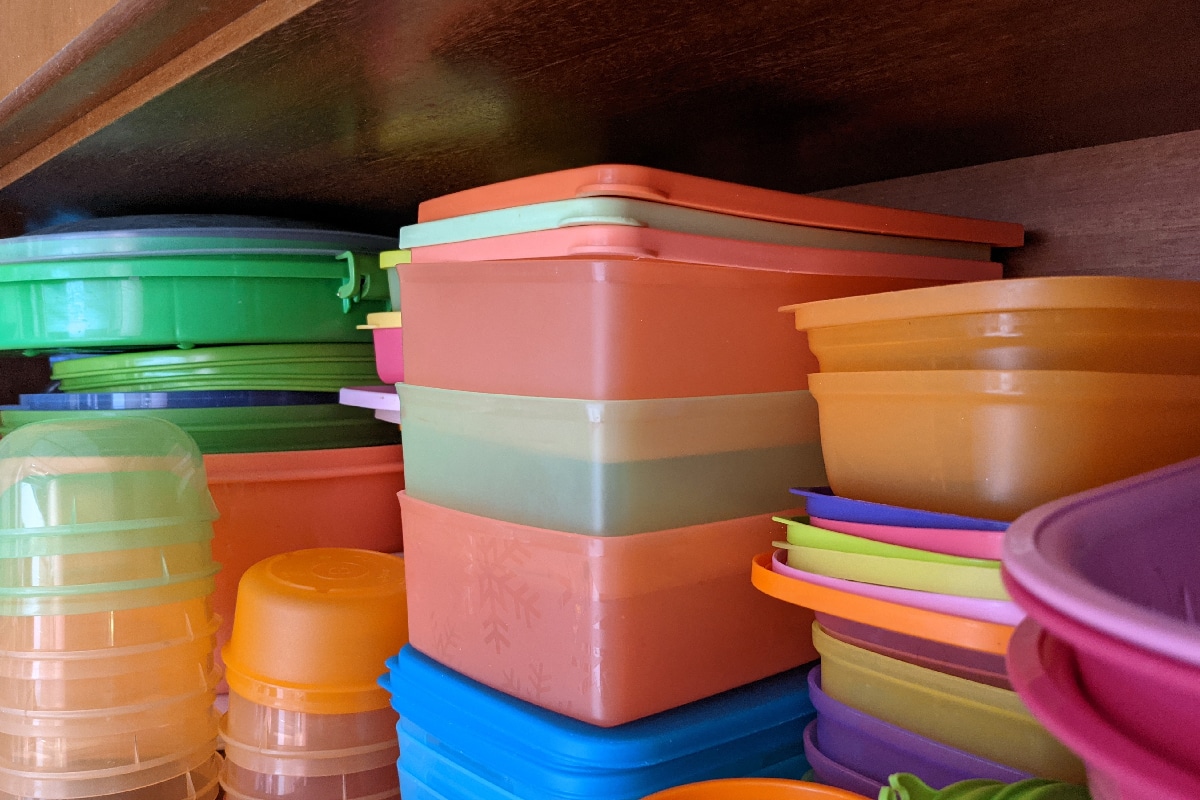 When it comes to food storage, cling film has many benefits. It's great at sealing in food and keeping it fresh. As mentioned earlier, it does have its drawbacks.

Your best bet for food storage isn't cling film or aluminum foil. Instead, invest in a good set of Tupperware. Tupperware can be used for both short-term and long-term food storage. It's durable, doesn't tear, and won't cause a reaction with acidic foods.

In addition, Tupperware can be used in the microwave and dishwasher. Lastly, it isn't a one-time use product—you can use it over and over again. Not only will this help your environmental impact, but it will also save you money in the long run.

So, next time you are at the store, ditch the cling film and aluminum foil and invest in a good set of Tupperware. Your food will thank you for it.

How Do You Clean Melted Cling Film?

If you do happen to accidentally melt cling film, don't worry—it's not the end of the world.

Once the cling film has cooled, use a paper towel or cloth to wipe up the mess. If any cling film is stuck to the surface, use a plastic scraper to remove it.

If there is still cling film stuck to your cooking surface, you can use a bag of ice to harden it. Once it's hard, you can use the scraper to remove it.

Lastly, you can use a razor blade to scrape off the cling film. Just be careful not to damage your surface.

Cleaning up melted cling film can be a pain, but it's not the end of the world. With a little elbow grease, you can get your surface looking as good as new. 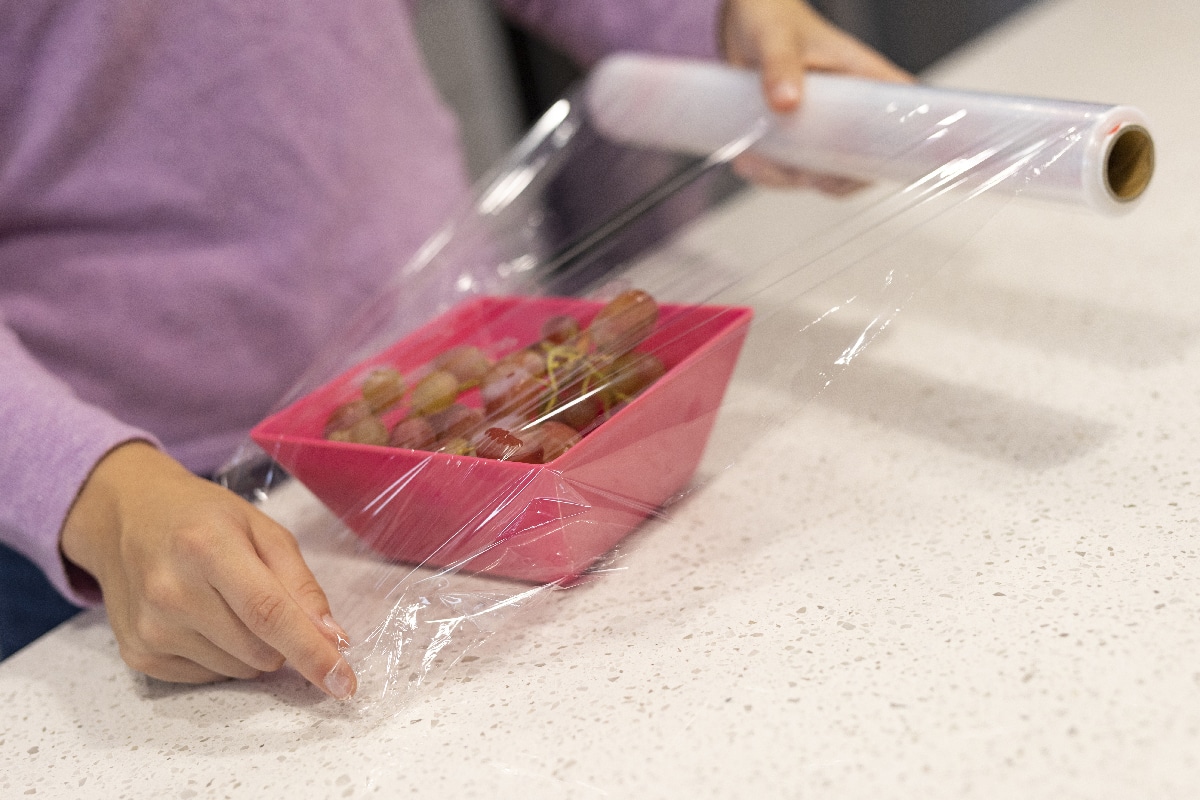 Overall, there are several benefits and drawbacks to using cling film in the kitchen. It can be a quick and easy way to cover and store food. Just be sure it isn't used near warm or hot surfaces, as it can melt.

Made it to the end? Here are other articles you might find helpful:

Should You Wrap Cheese In Foil Or Cling Film?

When Should You Replace Plastic Food Containers?

Can You Store Rice In Plastic Food Containers?

6 Ways To Strain Rice Without A Strainer

How Long Can You Keep Popped Popcorn?