Whether it's game day or a night in to watch movies with the family, nachos are one of the best snacks you can share with the family. In this post, we will share with you what we've learned about the best temperature to bake nachos. We will also delve into nacho ingredients and the best ways to make the ultimate nachos for your family.

Nachos are best baked at a moderate temperature of about 350°F. This temperature is high enough to melt the cheese of the nachos, but it isn't too hot to burn the tortilla chips to a crisp. Bake the nachos for 3 to 5 minutes, just enough to give your cheese that gooey, stringy effect everyone loves.

Making nachos is simple, but nacho lovers do have a certain preference when it comes to these yummy appetizers. We will discuss the best ways to get those perfect nachos. Keep reading as we break down ways to prevent nachos from getting soggy, as well as the alternative ways you can do to make your favorite game-day snack. 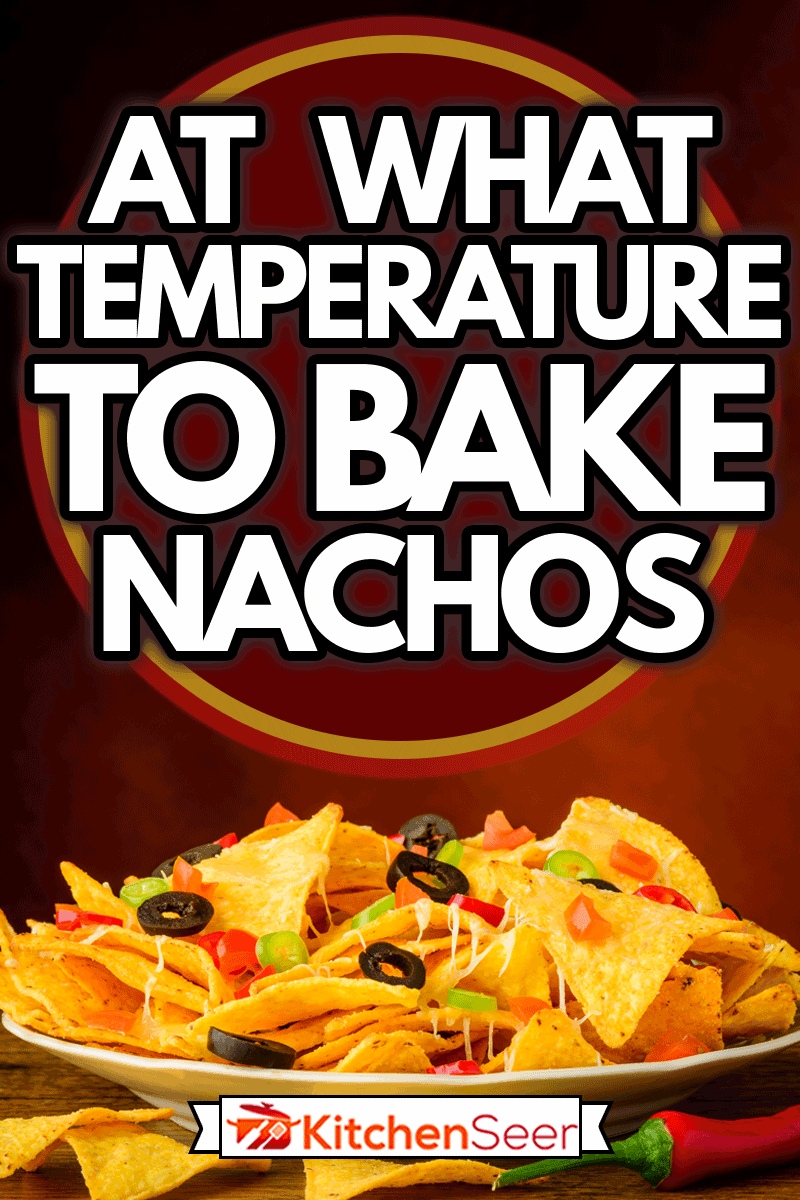 At What Temperature To Bake Nachos 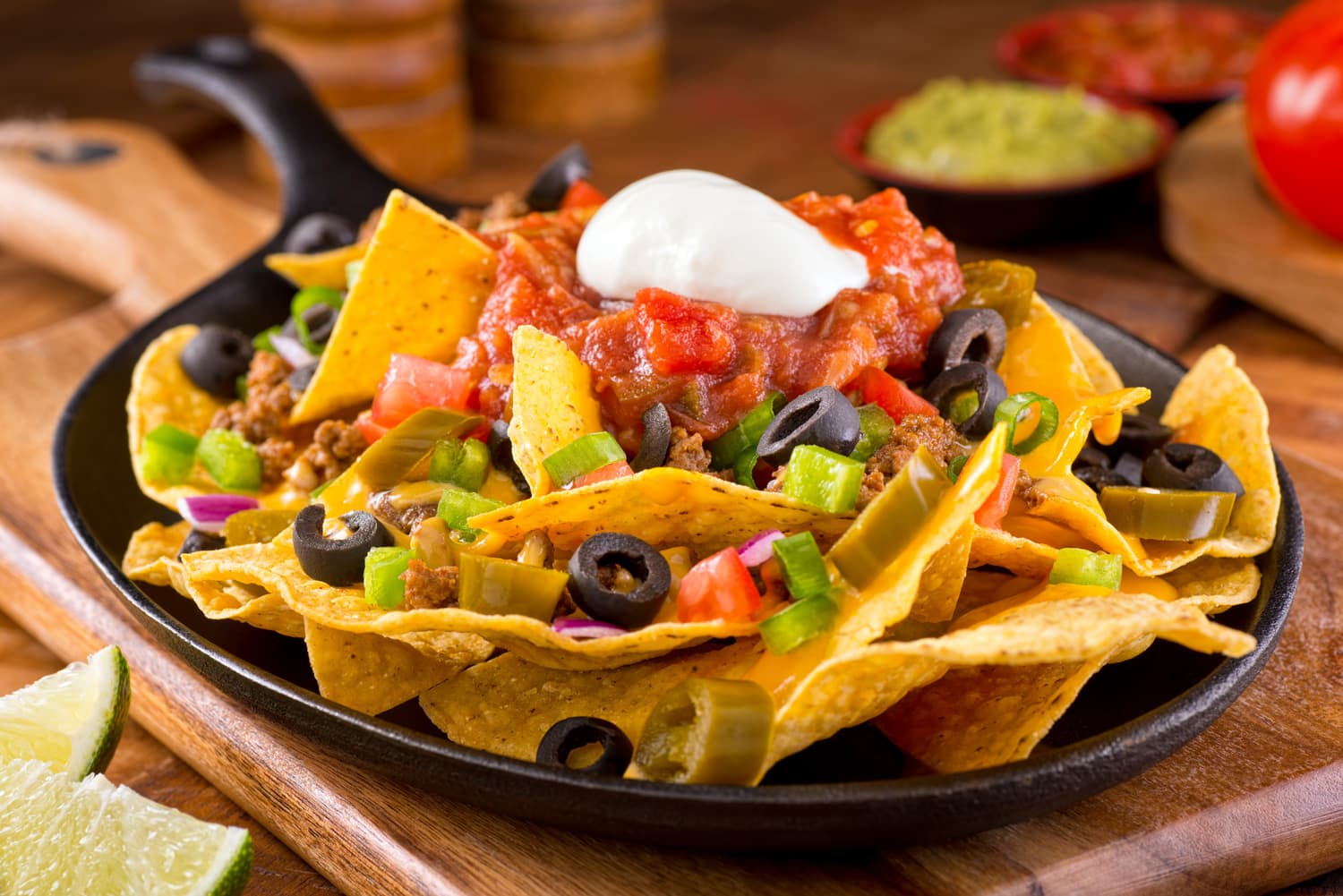 Nachos are a Tex-Mex dish that is typically made with fried tortilla chips topped with melted cheese, seasoned ground meat, vegetables, salsa, and other toppings. This dish is commonly served as a snack or an appetizer for parties and sporting event days.

At its most basic form, nachos can simply be just tortilla chips and melted cheese. This basic recipe requires nachos to be baked in the oven to make the chips crispy and to melt the grated cheese on top. This base layer can now be topped with any topping and condiment of your choice.

There are many different recipes for nachos that are available for you to try. However, regardless of the recipe you will try, you will most likely need to bake your nacho chips before layering all the toppings on top of it.

To make sure that your tortilla chips will be crispy, make sure to preheat the oven to 350°F. Place the chips in a single layer (slightly overlapping them is okay) on a sheet pan and toast the chips for about 5 minutes. Carefully remove this from the oven so you can add the remaining toppings for your nachos.

After toasting, sprinkle some grated cheese on top of the toasted chips, along with the beef and bean mixture (if adding), and bake it in the oven for another 3-5 minutes. Make sure that all the cheese has melted before taking it out of the oven.

Get this set of sheet pans on Amazon.

Are Nachos Better In The Oven Or The Grill?

Nachos are definitely easier to make in the oven. This is because it will take you less than 10 minutes to get everything prepped and done with a stovetop and a preheated oven. However, on some occasions, the oven might not be available or otherwise preoccupied, so you might be looking for other ways to make nachos.

Fortunately, you can also cook nachos on the grill. This is also perfect if you're planning to make appetizers while doing a barbecue. To make nachos on the grill, make a few boats using heavy-duty aluminum foil by taking sheets of foil and crimping the sides. Assemble your nachos as you would do on a sheet pan.

Place the nachos on the preheated grill and cook covered for about 5 to 10 minutes, or until the cheese has melted and the chips are toasted. If your grill does not have a cover, tent the foil boats with another sheet of foil, or make a large foil packet to put the nachos in. The chips won't be as crispy, but they'll definitely melt that cheese perfectly.

What Is The Best Melting Cheese For Nachos? 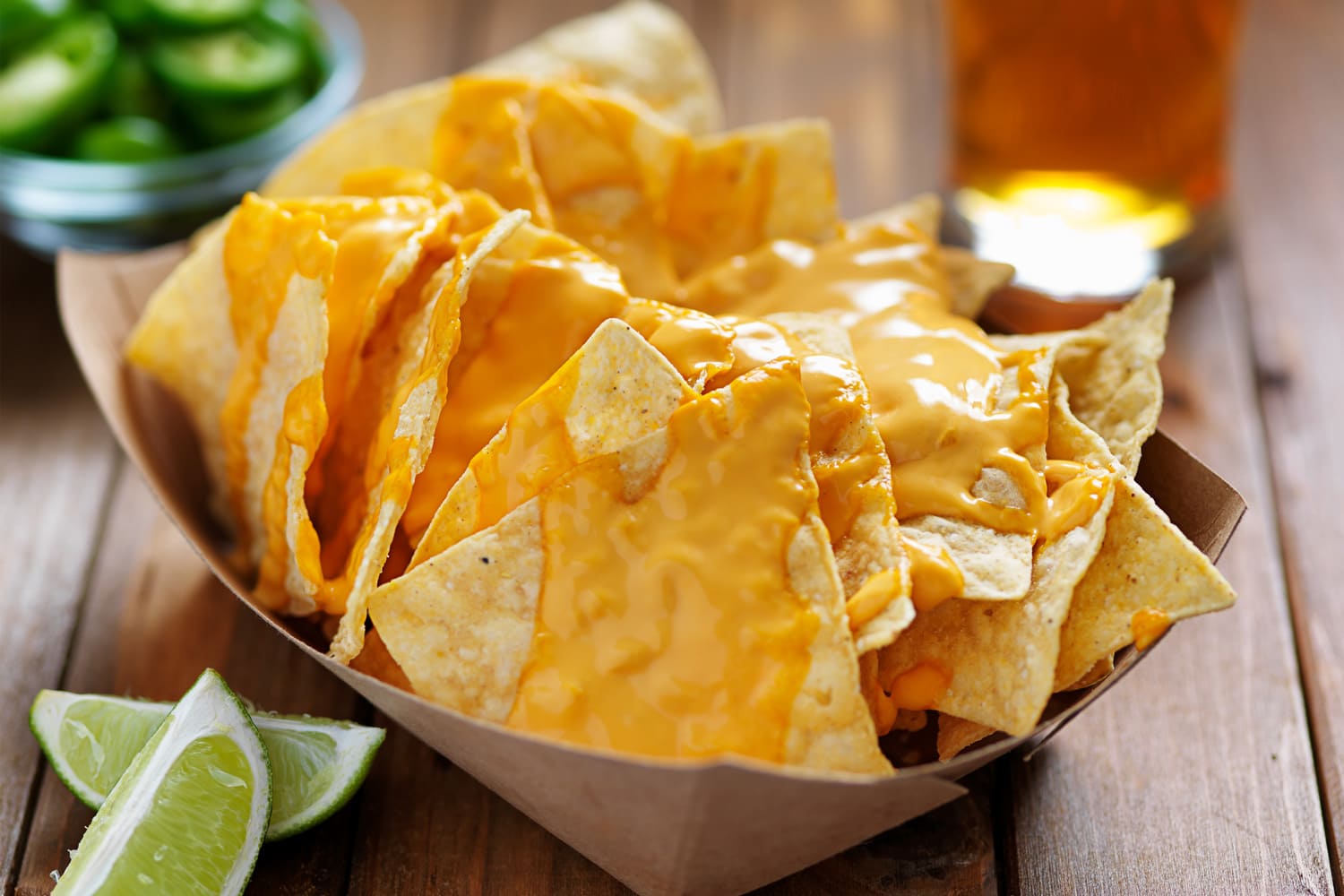 Ultimately, one of the things that people have an unbiased love for when eating nachos is that layer of stringy, gooey melted cheese. It is the crowning glory of nachos—after all, you can simply eat tortilla chips and melted cheese and be perfectly happy with it.

When making nachos, it is important to choose cheese that melts really well. You can either layer it directly on your toasted chips or melt it down into a cheese sauce. It's tempting to buy pre-shredded cheese when making this appetizer, but try to hold off that convenience. As much as possible, grate the cheese on your own because it tastes better and it doesn't have additives.

The ultimate classic nacho cheese would probably be cheddar cheese. This cheese is pretty easy to get, and it melts quickly as long as you use young cheddar. It is rich and creamy, and this cheese will probably make you feel like you're eating nachos right off the stadiums. If you'd like to add a bit of tang to your nachos, try using sharp cheddar.

See this cheddar cheese on Amazon.

Monterey Jack is a semi-soft cheese that is very buttery and melts really well. The Pepper Jack cheese is a variant of the Monterey Jack, but it lends a whole new set of flavors with the addition of jalapeños, bell peppers, garlic, habaneros, and herbs.

Check out this Pepper Jack on Amazon.

If you've ever been to a Mexican restaurant and you've tried their cheese dip, then chances are you've had Asadero or Oaxaca cheese. This cheese is very meltable with a very mild flavor that complements the taste of the other toppings you will add to your nachos.

White American cheese is an easily meltable cheese that is typically used in cheese sauces because of its silky texture. It has a very mild flavor that goes well with the saltiness of the tortilla chips.

Check out this White American cheese on Amazon.

This cheese isn't just for pizza. Mozarella can also be used on nachos because it is perfectly easy to melt and it is very stringy. The flavor is also very mild, making it a good partner to the different flavors of all the other toppings. The only downside of mozzarella is that it tends to clump when it gets cold so try to polish off those nachos as soon as possible.

Get this Mozarella cheese on Amazon.

What Are The Best Chips For Nachos? 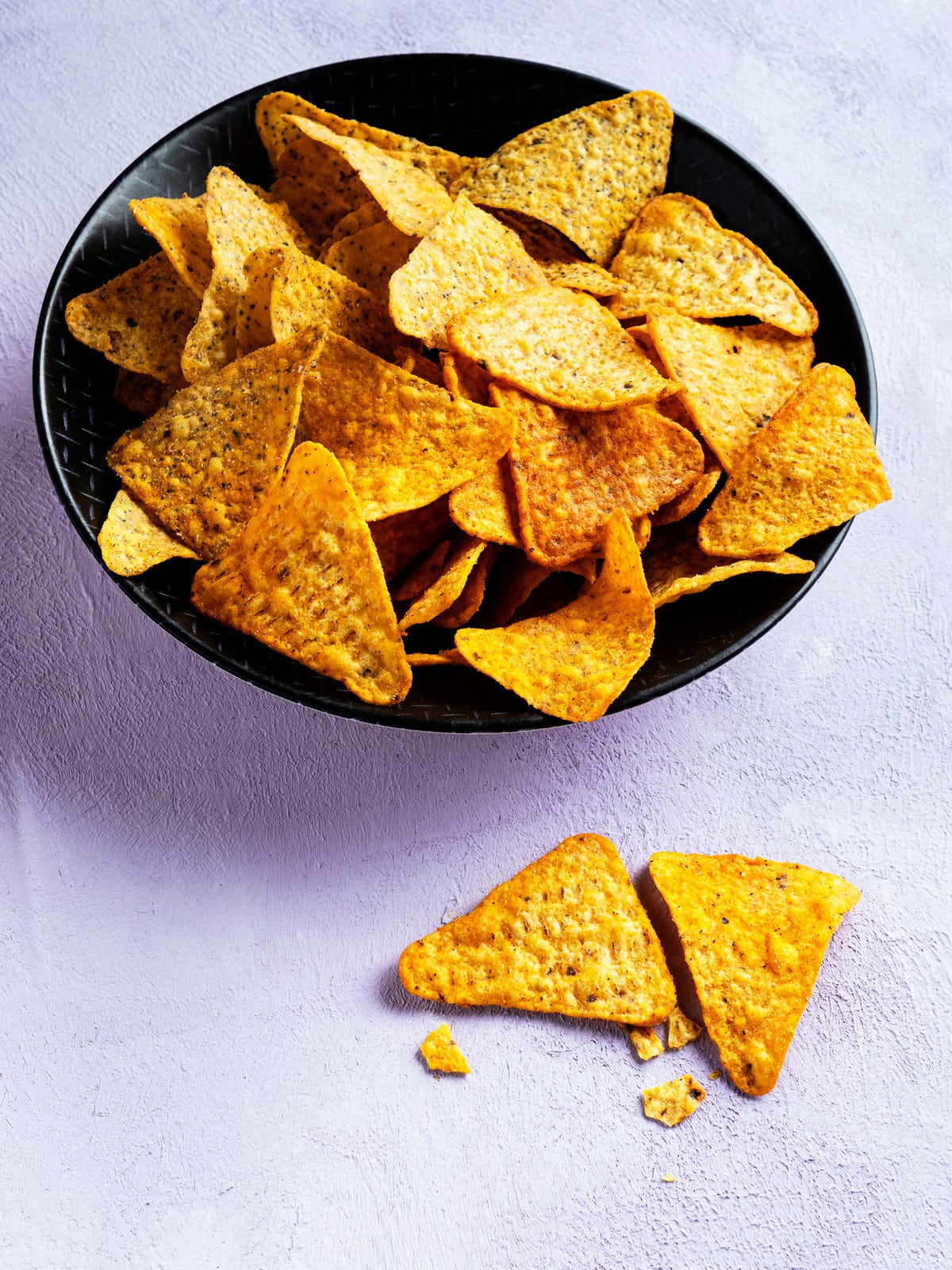 Nachos can only be made with classic corn tortilla chips. These chips are salty and crunchy, and they complement the different toppings you will add to your nachos. Tortilla chips are made of corn, and you'll find multiple varieties, such as white, yellow, and blue corn.

When picking chips for nachos, try to look for tortilla chips that are thick and sturdy so they won't get soggy too quickly when the toppings are added. Look for ones that are not overly salted and greasy because this can affect the overall flavor of your nachos.

Yellow or white corn tortilla chips are the most common kinds of tortilla chips you will find on the market. These chips are made from either white or yellow corn, but the taste is generally the same for either variant.

Check out these white tortilla chips on Amazon.

The only notable difference between the two is the color, but these two chips are both mild-tasting which can complement the nacho toppings.

Get these yellow corn chips on Amazon.

Blue corn chips, on the other hand, have a heartier flavor than their white or yellow counterparts. These chips are made of blue corn and have about 20% more protein and 8% less starch than the other variants. It has also a lower glycemic index and antioxidants, making it a slightly healthier choice for those who are on a diet. It also adds extra color to your nachos. 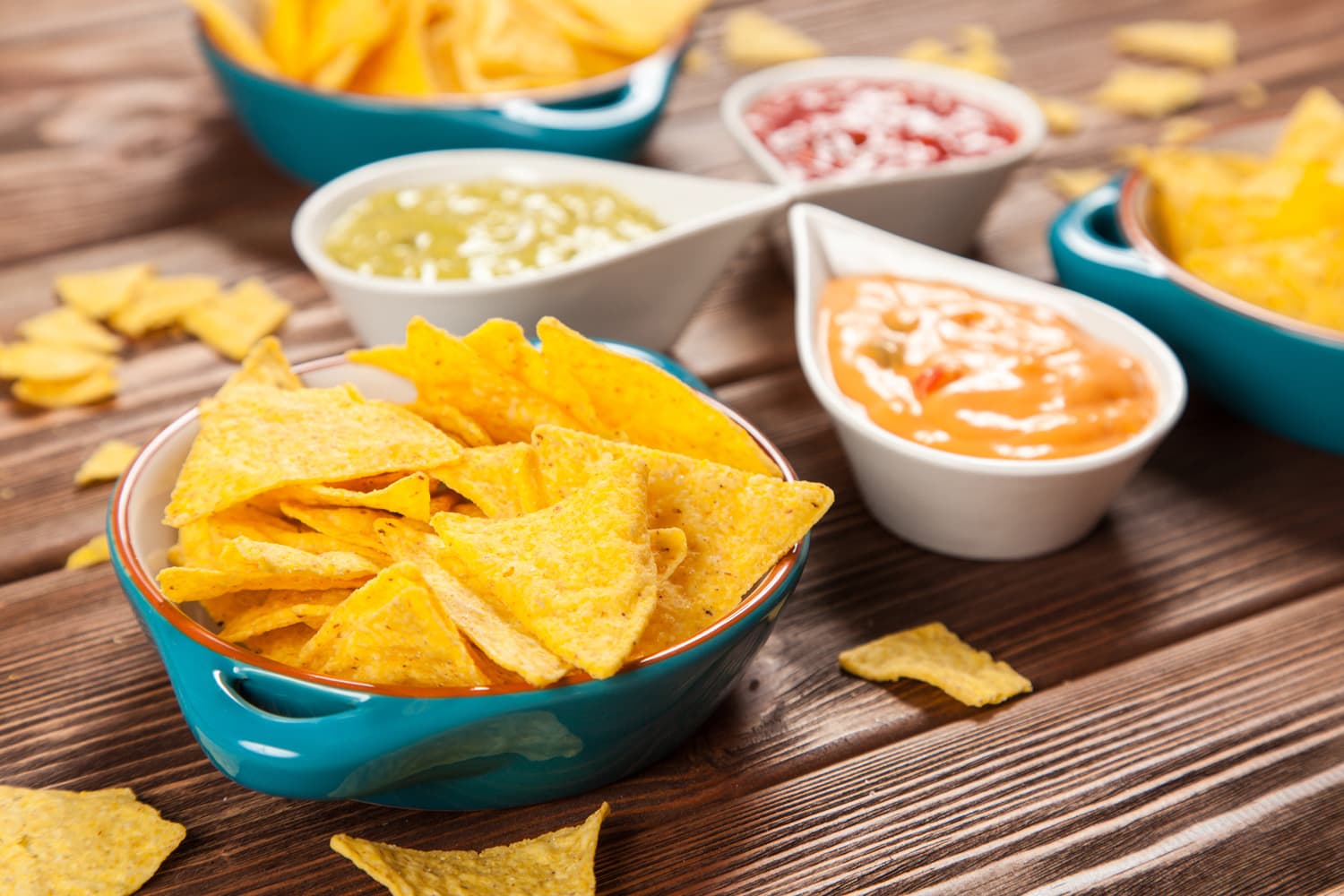 Nachos will always be the ultimate appetizer for game day or movie night. It's a dish everyone will surely love, and with the right combination of toppings, you will surely be able to make that superstar nacho recipe everyone will look out for. Pair your nachos with some ice-cold beer and you'll surely get the party started.

Looking to know more about making the best nachos for game day? Don't worry about it because we've got some articles that might help you:

How Long Does Queso Fresco Last After Opening? [And How To Make It Last Longer]

How Many Layers In Puff Pastry? [And How To Make One]

Can You Refreeze Tomatoes?