Kitchen scissors are one of the most convenient tools to have in your drawers. They make opening up packaging, snipping herbs, and chopping poultry so much easier. You must have noticed that little gap between the handles and wonder what it is for. We’ve done the research to provide you the answer to that.

The middle part of kitchen scissors sometimes has metal teeth. These are often used as a nutcracker. Ones with and without teeth can also be used as a bottle or jar opener. 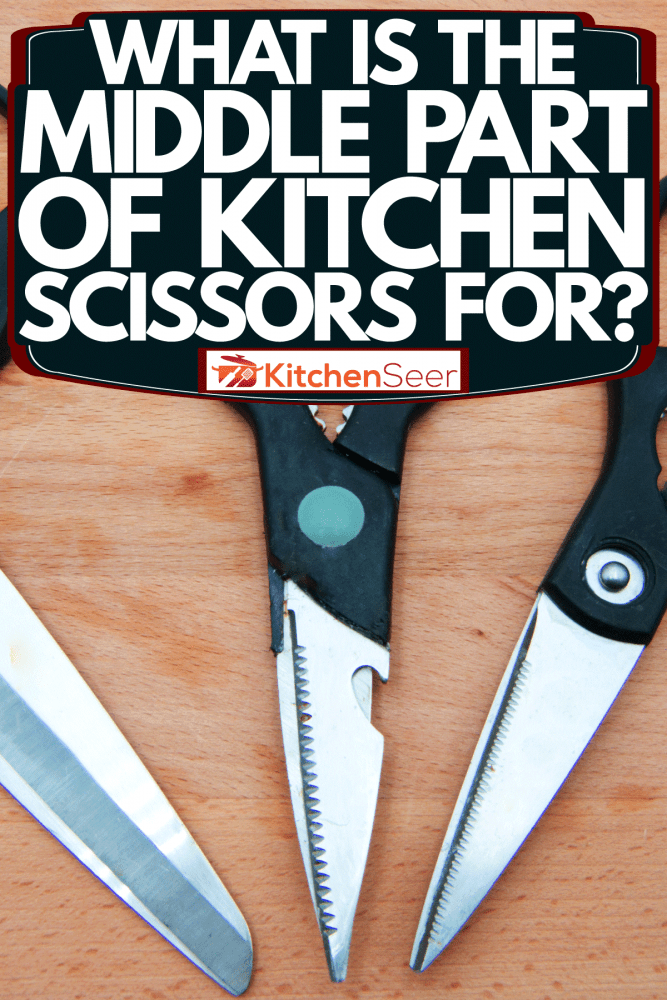 The beauty of kitchen shears is they slice open whatever needs a cut with ease. Because it’s kind of a heavy-duty kitchen tool, shears can handle tougher cuts. A good example is packaging with several layers for protective reasons. A good knife could get it open, but it’s more time-consuming and riskier to your safety.

In some cases, kitchen scissors may be a necessity, depending on the dish you’re making. For example, one job of this tool is to split a whole chicken. You can use these scissors to cut out its spine, making it easier to prepare rotisserie chicken. 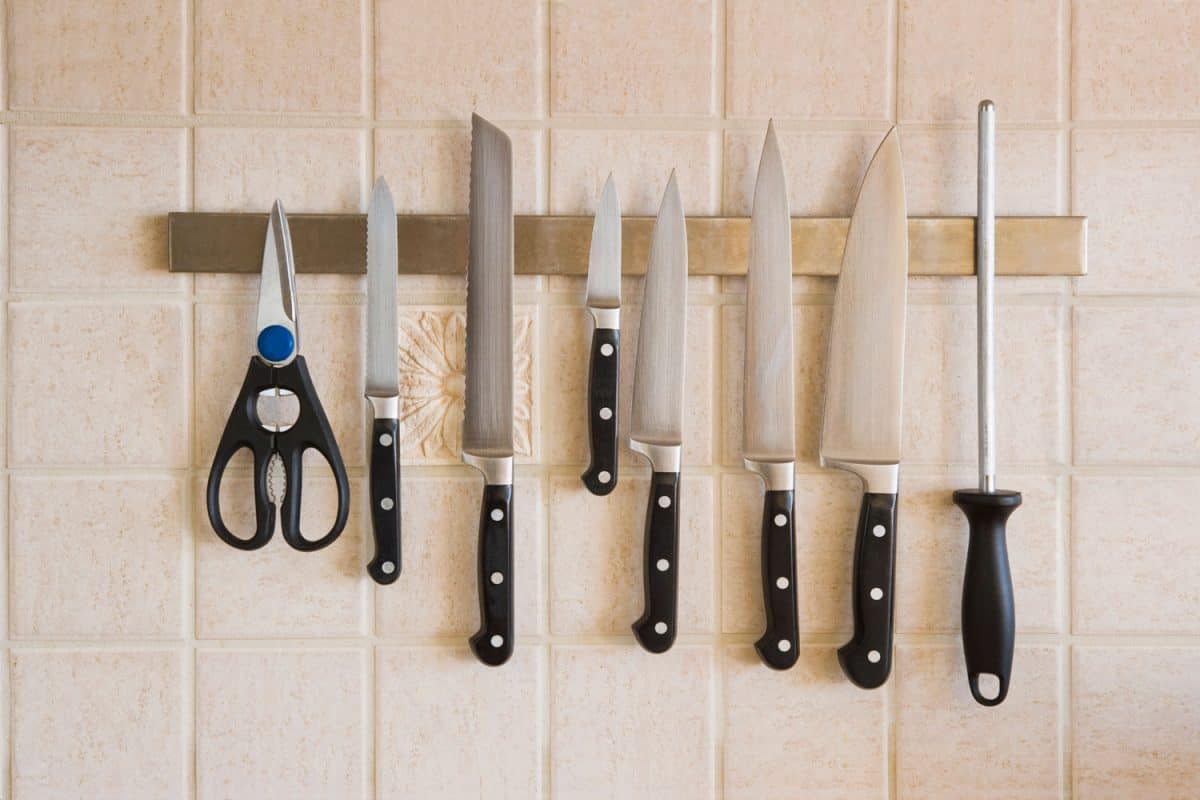 Not only are kitchen scissors heavy-duty, but they also serve other great uses. If you don’t have a bottle opener, use the kitchen shears. The circle in the center of the scissors is used to help open bottles and small, hard-to-twist jar lids. This saves you time and hand strength trying to open a stuck lid by hand.

You can even use kitchen scissors as a backup nutcracker. The heavy-duty build mixed with some added force can crack a nut of choice open.

So while you can survive without kitchen shears, it’d be pretty questionable to not have a pair. Think of all the food preparation time you’d save. That’s more time for you to clean up the cooking area once everything is on the stove or in the oven cooking.

How do you Maintain Kitchen Scissors?

In order to make the most of your kitchen scissor’s usefulness, you need to take proper care of them. It’s not as simple as throwing it inside a drawer after you’re done with them. You don’t treat kitchen scissors like regular scissors.

Because of this, we’ll provide you tips to get the most longevity from your pair of kitchen scissors. Warning: you’re handling sharp blades! Please proceed with caution whenever handling these --or any-- scissors.

Like your knives, dull blades won’t provide you with the nice chop you’re looking for. Routinely sharpening the blades will keep up your kitchen scissor’s usefulness for a while.

To sharpen the blades:

Then repeat this with the other blade.

Just like any other kitchen utensil, kitchen scissors need to be washed after every use. You can place yours in the dishwasher if you want, but as shared by Earnest Wright, kitchen scissors are better suited for wet working. But don’t let them soak in the sink water.

Use warm water and a dab of soap, then carefully scrub each blade and handle. Don’t forget to clean the circle in the middle.

After rinsing, use a dry cloth to wipe it dry. Make sure the scissors are open so you can dry off the inner parts. You want to ensure your scissors are completely dry before storing them. You’ll understand why very soon.

As we mentioned, don’t just toss these in the drawer once you’re done using them. Kitchen scissors need to be stored in a dry environment.

A case is a good place to store them. You can also hang them on a magnetic strip where you can simply grab them when ready to use again. Some knife holders may have a slot specifically for your kitchen scissors.

How do you Keep Your Kitchen Scissors From Rusting?

There’s a high chance that whatever brand of kitchen scissors you bought was made with stainless steel. That’s great and all, but that doesn’t mean it’s prone to rust. Carelessly ignoring the above maintenance tips will still cause rust to develop slowly over time.

The reason kitchen scissors need to be completely dried and stored in a dry area is to avoid oxidation. Polymer Solutions explains that rust will occur even on stainless steel if there isn’t a strong enough layer of chromium to protect the steel. 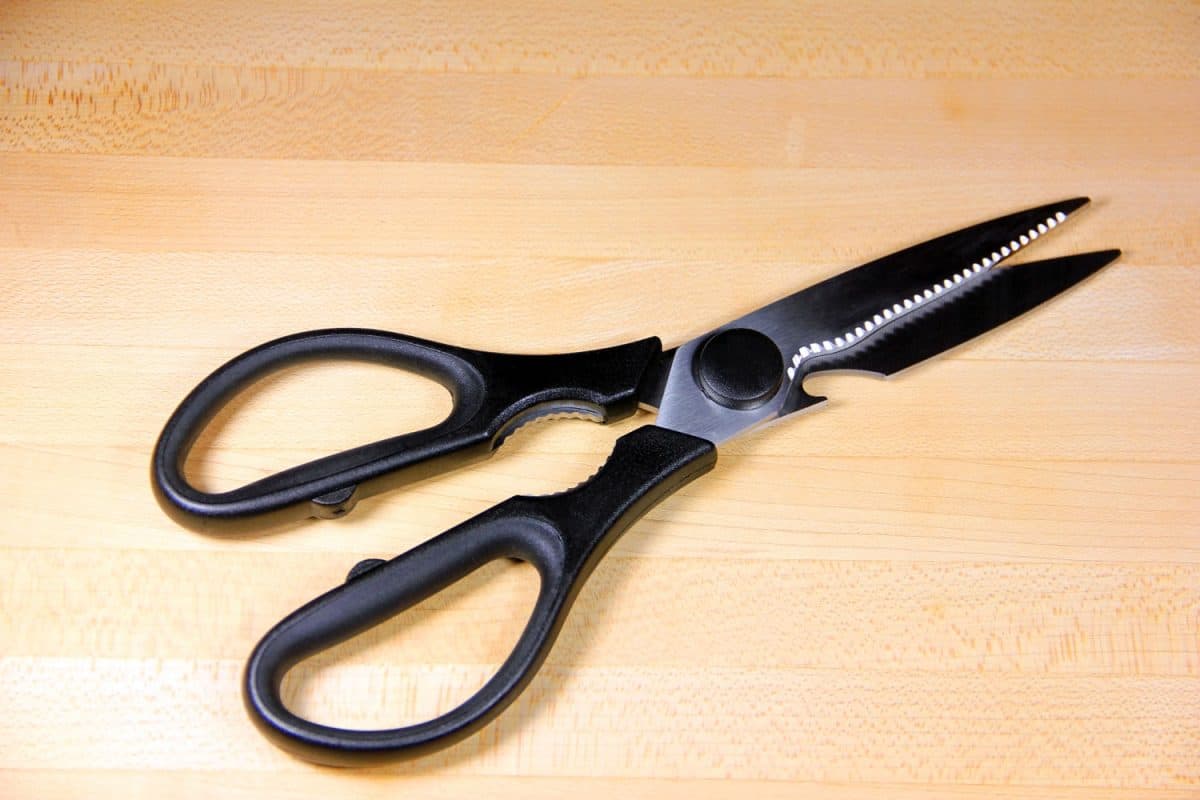 Exposure of the surface to water will slowly lead to corrosion. Wiping and storing the scissors dry is crucial for its longevity.

An extra rust-preventing action you can take is to apply a little oil. A couple of drops of your cooking oil is fine. Target the scissors’ screw primarily, then the blades. Wipe off any excess oil once finished.

Once you’re complete, inspect the area where the kitchen shears are to be stored. Is the air damp? Has any moisture gotten inside? If so, remedy those problems or store the shears somewhere else. That moist air will have a similar effect as if you hadn’t completely dried the scissors after washing them.

Are Kitchen Shears the Same as Scissors?

The way that both items are designed, it’s easy for anyone to mix up the names of these two items. Both tools cut things, have cautiously sharp blades, and similar plastic or rubber grip shape.

The teeth on kitchen scissors are the one feature that regular scissors don’t have. 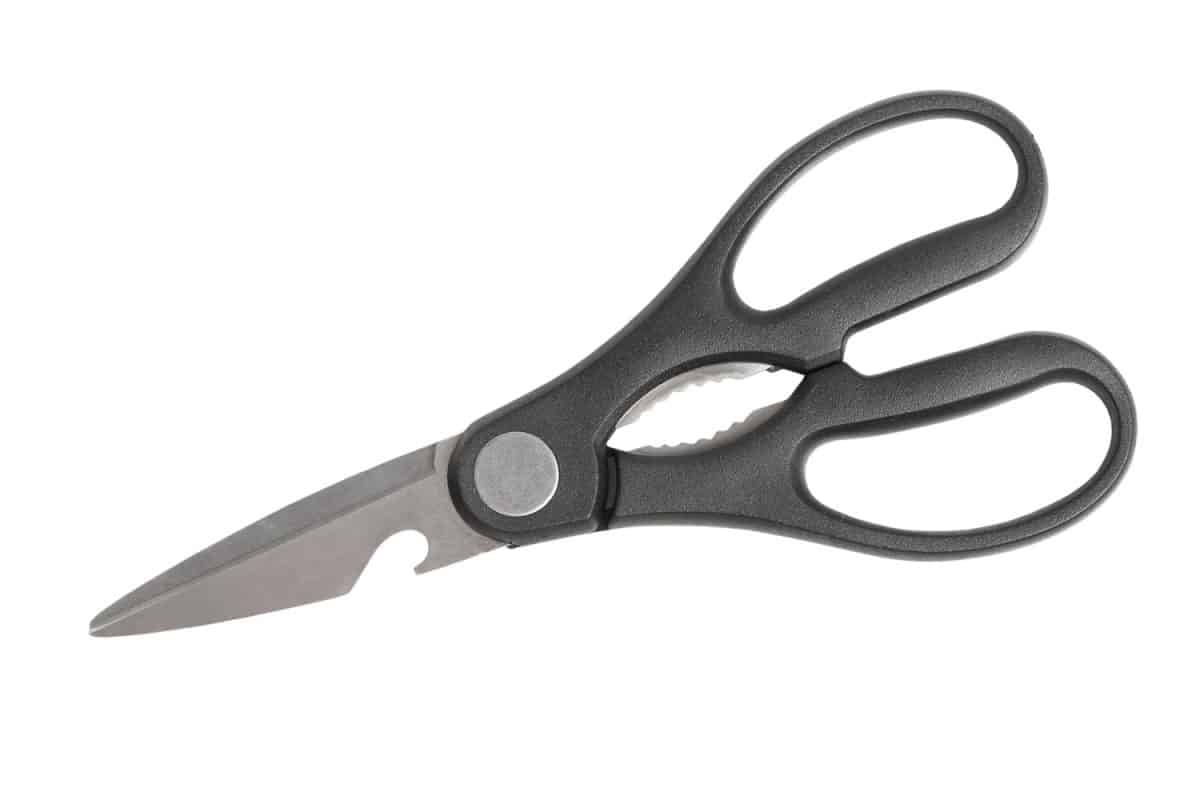 Can You Use Regular Scissors as Kitchen Shears?

Those teeth are what make kitchen shears the superior cutting tool versus regular scissors. We’ve mentioned the functionality of these teeth earlier (opens jars and lids, cracks nuts, etc.). Regular scissors don’t have this feature so it can be used as an alternative.

Regular scissors also can’t take on the tasks meant for kitchen shears. You would have a long, tough time trying to cut through a chicken with a regular set of scissors. Sometimes, it’d be better to use a knife than use regular scissors. Because the blades on regular scissors aren’t as strong, a knife would likely accomplish more tasks.

If all you need to do is cut open food packaging or chop leaves off, then regular scissors will do just fine. You’ll still need to clean and care for regular scissors the same as you would kitchen shears.

In reading this, we hope you see what makes kitchen scissors significantly different from a regular pair of scissors. There’s no harm in having one or the other, but if you do a lot of detailed meal preparation, kitchen scissors are for you.

Feel free to check out some of our other related posts below:

Do Knife Sharpeners Wear Out?

Should A Stockpot Be Covered?

Why Do Spatulas Have Holes?

How Hot Does A Microwave Get?