Can't have tasty pumpkin soup get ruined by the taste of lumpy soap, right? If you still find detergent in the dishwasher after a full cycle, there are a few reasons for this. After thorough research on the anatomy of this issue, we can now confidently guide you on how to eliminate it.

If there's still soap in the dishwasher after a cycle, remember the acronym SOAPS:

It's pretty straightforward if you look at it from this point of view. We've intentionally made it that way, clean and clear. But to take the proof out of the pudding—and the pudding off of your dishes—we implore you to dig deeper into the details of why: 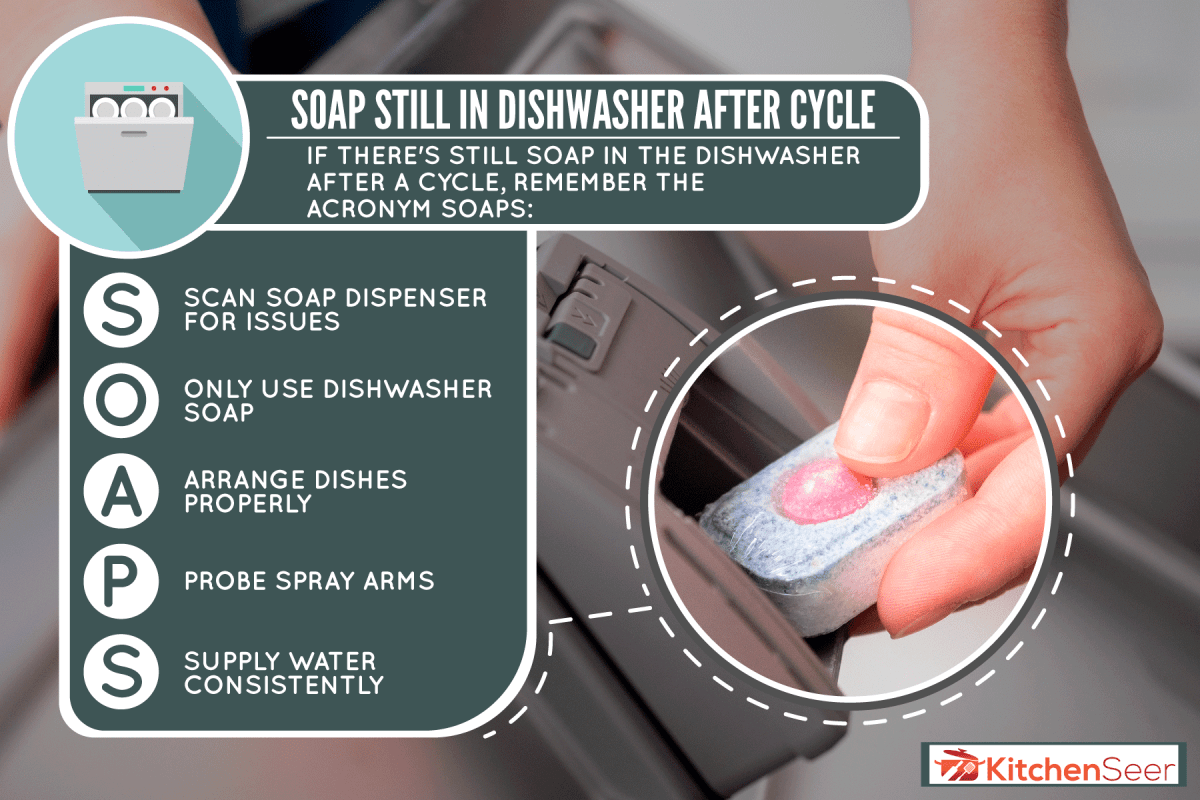 Soap Still In Dishwasher After Cycle - What To Do?

To ensure that the soap gets dissolved and does its job on the way out, the trick is to keep the SOAPS checklist in mind and take it to heart with constant application. Let's discuss the elements one by one.

Scan the Soap Dispenser for Issues

If you find that there's still soap in your dishwasher after a full cycle—or after several ones, even—the first place to look is the soap dispenser. It's where you put the soap before each load and likely where you'd find the cleaners caked together if left undissolved. 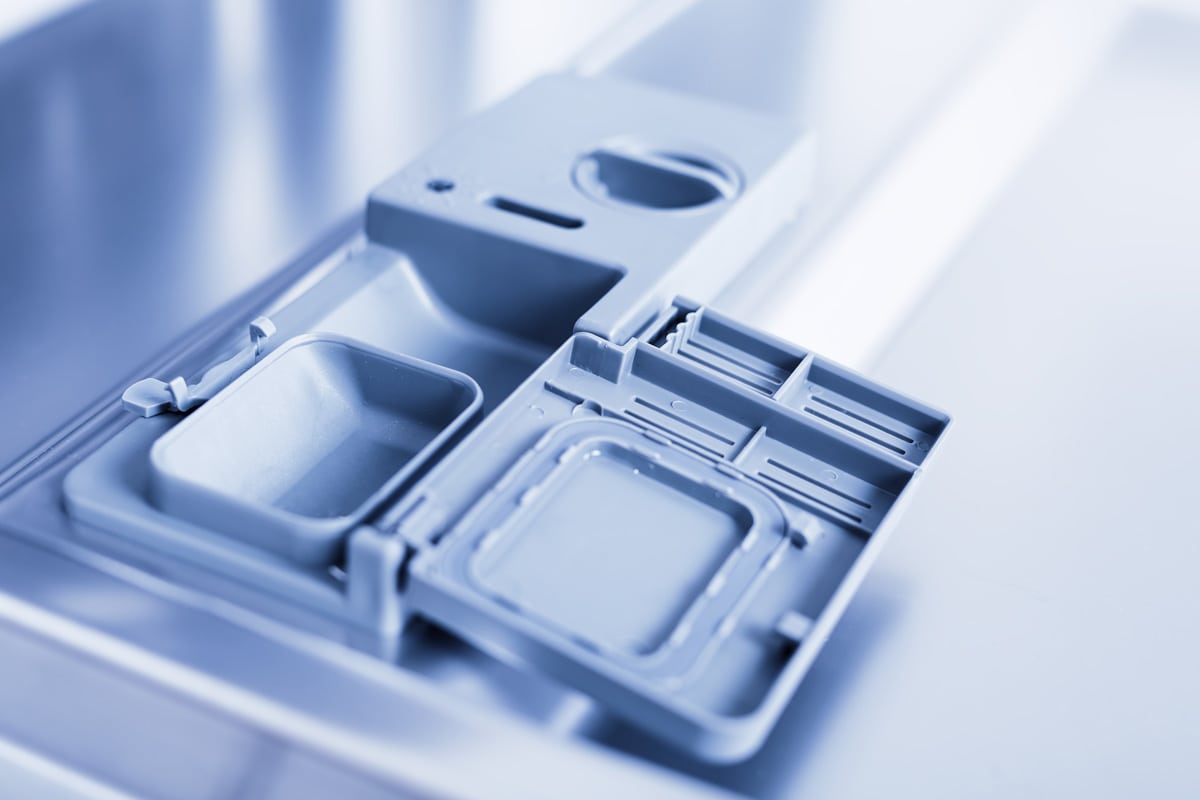 After the initial spraying of hot water, the dispenser gets a go-signal from your machine; it should spring open automatically, releasing the soap into the water. If you find that the dispenser stays shut after a cycle, the cause might be mechanical or electrical.

Try cleaning the dispenser's sides and corners with a toothbrush to remove hardened soap from yesteryears. If this doesn't work, you need to replace the dispenser. Look for a compatible replacement according to your dishwasher's brand and model.

Check out our detailed guide for this: Dishwasher Soap Dispenser Broken—What To Do?

Only Use Dishwasher Detergent 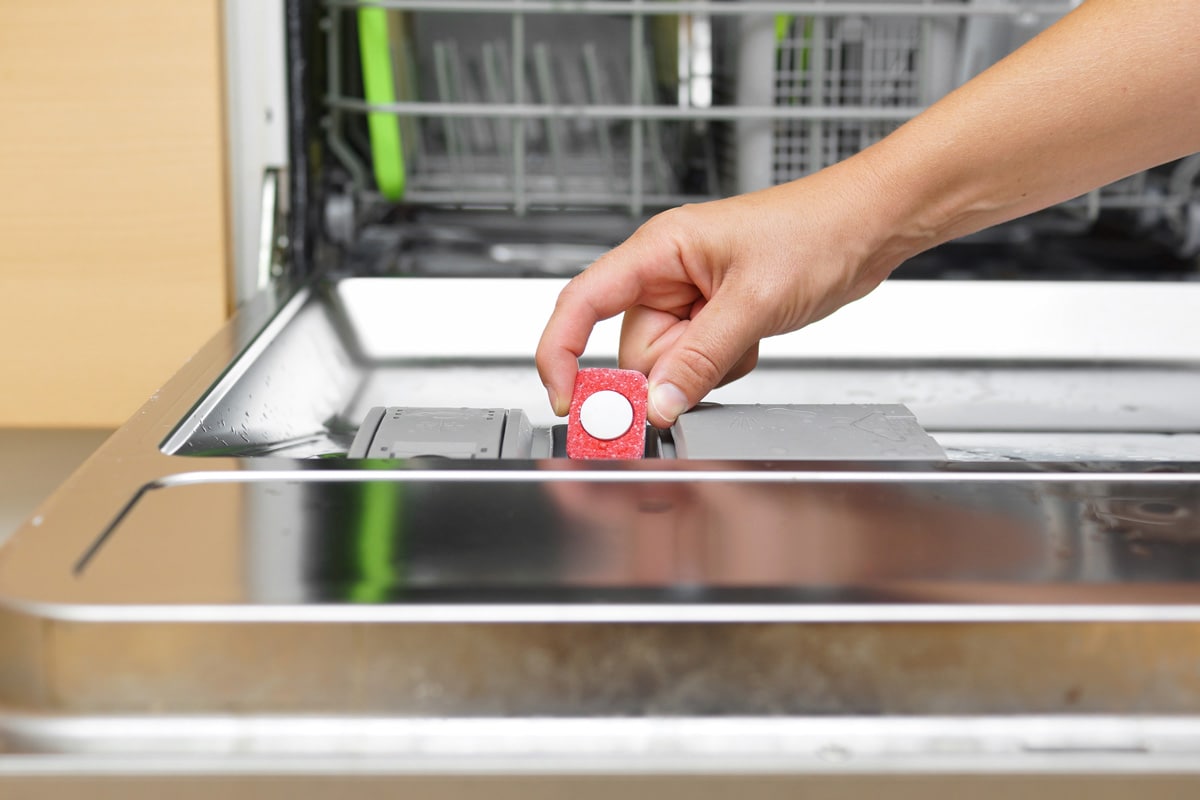 There are three forms of dishwasher detergent: powder, liquid, and pods. They all clean well, so you can rely on preference to make your choice. Unlike other cleaners we use in our homes, dishwasher detergents are specifically designed to not lather, so get surprised to see no suds. Always follow the instructions printed on the packaging to determine the amount of detergent for each load. Too much will make it hard for the dishwasher to rinse it off properly.

Keep your powdered detergent in dry, sealed containers to avoid clumping together—especially if you live in a humid environment. If you feed slightly moist detergent to the dispenser, it can remain caked on the walls or flap after the cycle ends.

Check out this dishwasher powder on Amazon.

Liquid dishwasher detergent is inexpensive and comes packaged in bottles that can be bought in most stores. This affordability, coupled with accessibility, is why it is a common choice for some households.

Don't confuse it with liquid dish soap, which is used for handwashing dishes. If you do, you'll be in for a big, bubbly mess. More on that later.

Check out this liquid dishwasher detergent on Amazon.

Pods—otherwise known as tablets—are marketed as the most convenient form of dishwasher detergent. They contain pre-measured dosages of concentrated detergent for regular use. The downside to pods is that they come with a higher price tag than the other two forms.

Ideally, they do. The pods come wrapped in a film made of a water-soluble plastic called polyvinyl alcohol (PVA). When the dispenser opens, the pods should drop into the pool of water below, where they dissolve at a controlled rate.

However, there are times when they stay undissolved after a cycle. This commonly occurs due to two reasons. Either they don't fall off, or the water isn't hot enough to melt them when they do.

This is why it is vital to always handle them with dry hands. This prevents them from sticking to the dispenser walls and not plopping down as intended when the dispenser opens. Wiping the dispenser dry with a clean cloth before inserting a pod also helps.

It's also important to feed the dispenser with water that's hot enough to melt the pods. This means anything between the range of 120 to 160°F.

To measure the incoming water temperature, collect water from the sink and use a thermometer—a waterproof one, of course. Keep the faucet running until the thermometer stops changing its reading. Increase the temperature of your home's hot water supply if needed.

In our research, many homeowners recommend letting the faucet run for a few seconds before starting a load, just to invite hot water into the pipes; it could take a few minutes if it were unused for longer than usual, like first thing in the morning.

Can you throw dishwasher pods at the bottom of the dishwasher?

Like the other forms of dishwasher detergent, pods should go in the dispenser. The dispenser opens at a predetermined moment which ensures a proper wash. It is not recommended to just toss them in because if you do so, the pods will all be used up in the prewash, leaving no more detergent for the main wash part of the cycle.

Check out this dishwasher detergent tablet on Amazon.

One of the most common mistakes we've encountered in our research is overloading the dishwasher. This can block the jets from reaching the dispenser, leaving behind remnants of soap in it when the cycle ends. Or it can physically hinder the dispenser door from opening to release the soap. In either case, the most common culprits are overstuffed utensil baskets (located near the dispenser in most models) and large pots and pans. Handwash the bigger items or load them separately.

You'll usually find the dispenser on the dishwasher door; keep it unobstructed when loading the dishes. 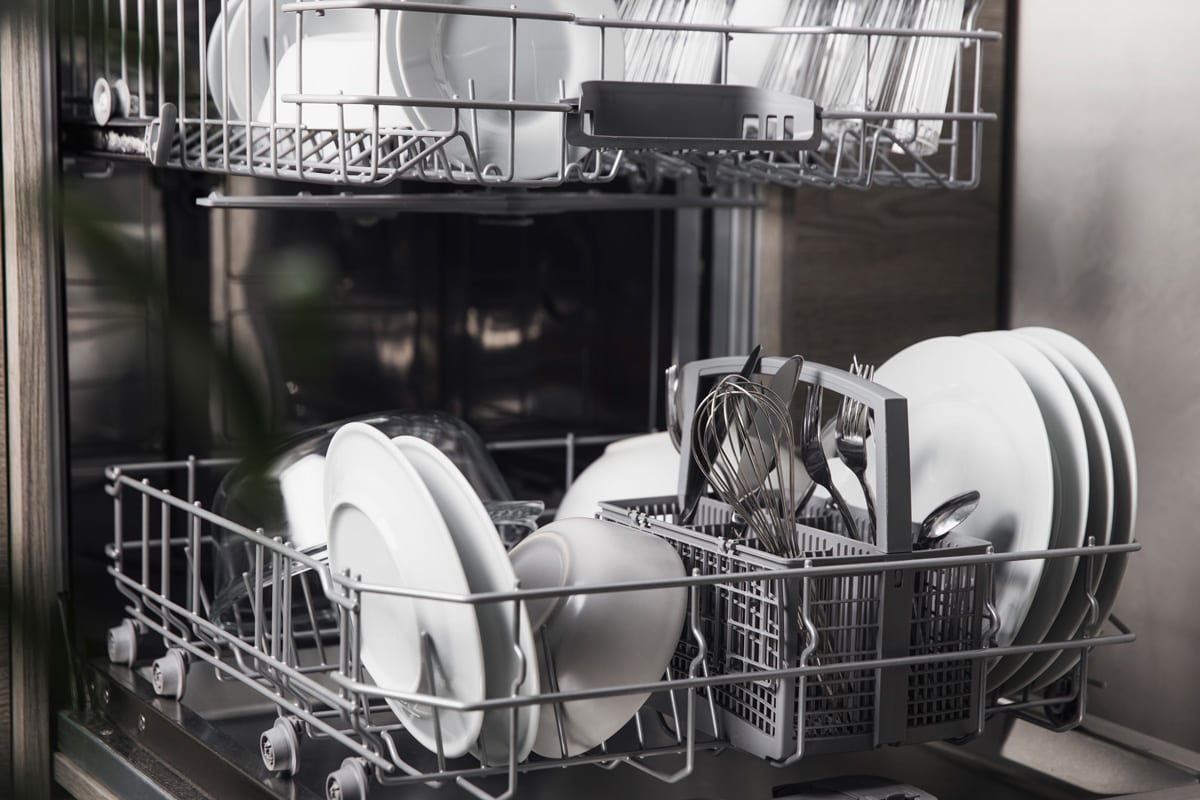 Additionally, EPA recommends: "Scrape, rather than rinse, dishes before loading into the dishwasher; wash only full loads."

Pre-rinsing or pre-washing your dishes prevents the soap from fulfilling its function by having no dirt to cling to. As a result, there'll be excess soap left on your dishes after the final rinse.

Spray arms have tiny holes that spew out jets of water with enough pressure to remove the leftover carbonara sauce from earlier. These arms rotate during operation to scatter water in all directions. Clogged or unmoving spray arms can cause soap to stay undissolved—especially in the dispenser where most residue typically resides. 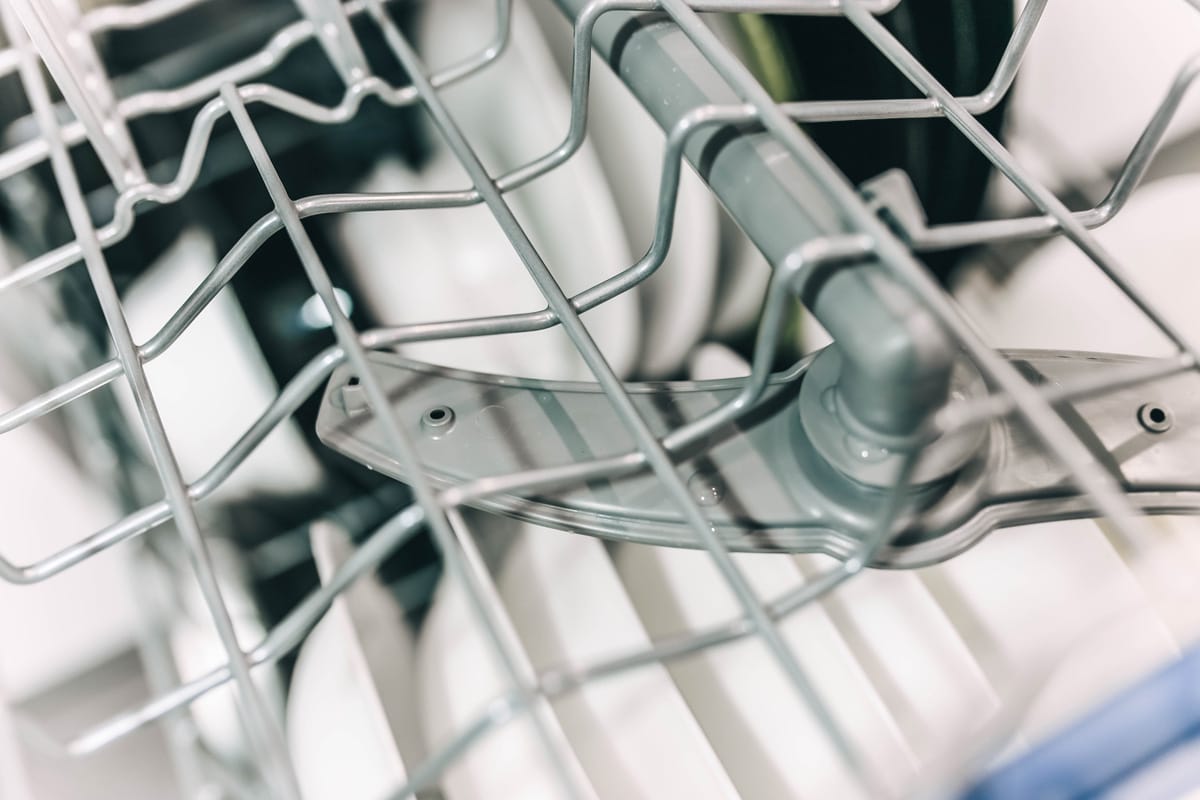 Clean the holes with a toothpick once in a while, and try flicking them around while the appliance is turned off to see if they are loose enough. If they are, then that's good—but not good enough.

To test if they rotate during an actual cycle, place a marker on the spray arms using a piece of tape or a rubber band. Run the cycle, and while halfway through, open the dishwasher door to observe if the marked position changes. Without fully-functional spray arms, water won't reach the dispenser where most detergent residue resides.

If you think the issue lies in the spray arms, head over to this article for detailed troubleshooting: Dishwasher Arms Not Spinning – What To Do? 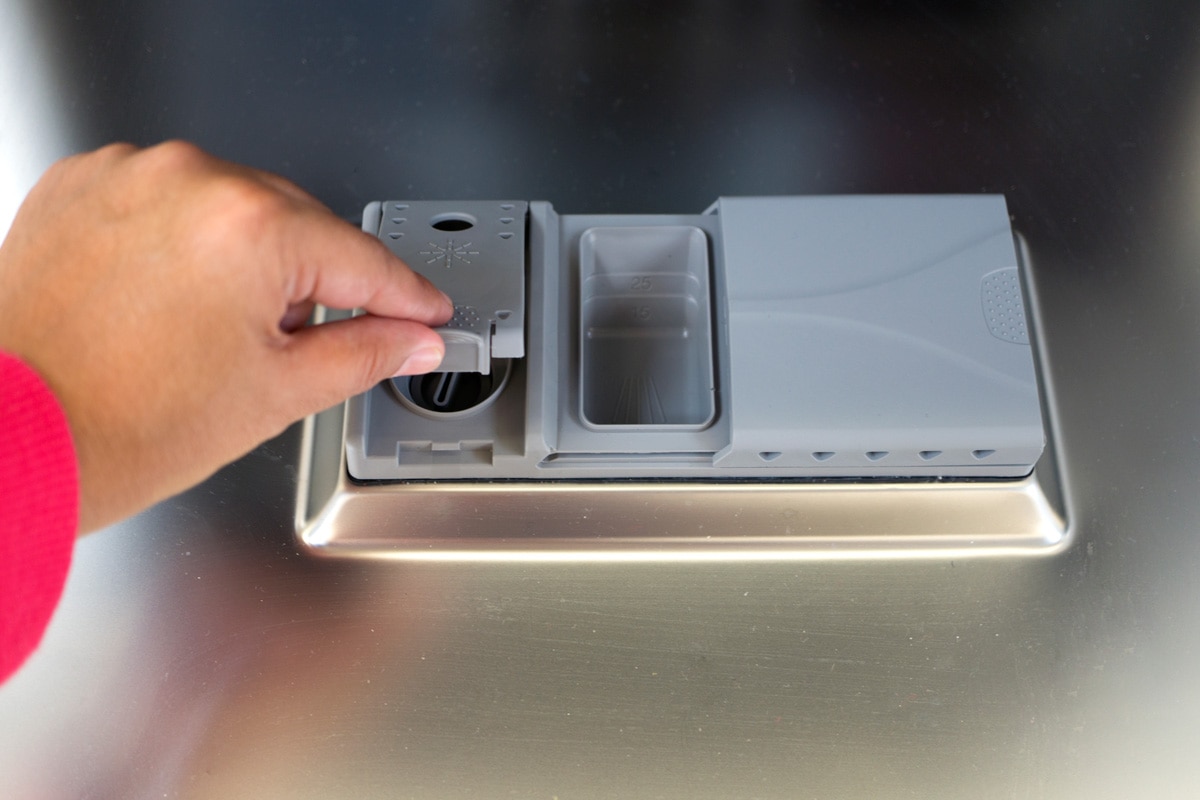 The dishwasher must fill with enough hot water to completely dissolve the soap. Underfilling, only filling the initial rinse and not filling at all, will leave you with undissolved soap.

Assuming no problem with your home's main water supply, the inlet valve is your prime suspect for any of these issues. This component acts as the gateway that controls water going into your dishwasher.

The usual reason inlet valves fail to fulfill their function is restriction by gunk or corrosion. To test if your inlet valve is restricted, pour 1-2 quarts of water at the base of your dishwasher and do a test cycle (with soiled dishes, as normally intended). If the wash quality improves significantly, that proves that the inlet valve was the offender. It is not recommended to clear out an old inlet valve due to the risk of further damage to the other components. Just replace it as soon as you can.

How to Get Rid of Soap Suds in the Dishwasher 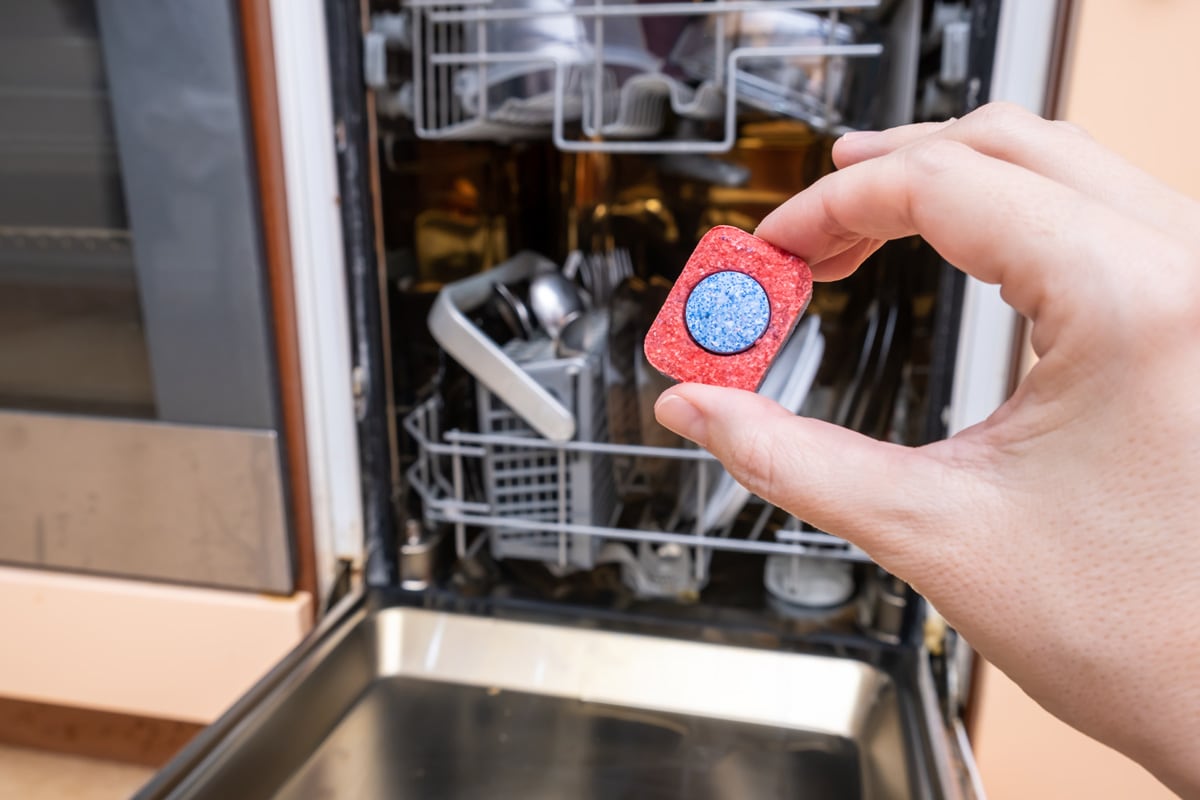 Liquid dishwasher detergents are distinct from liquid dish soaps, which are much more concentrated and produce suds. Do not put liquid dish soap in your dishwasher at all costs. If you make this mistake as others might have—by improvising in a pinch or by honest accident—the kitchen could become a slip-and-fall danger zone without anyone noticing. If you detect suds coming out of your dishwasher, stop the cycle immediately.

Grab a mop, a plastic container, a bunch of towels (you might need more than a few), some vinegar and salt—then proceed to clean by following the steps below: 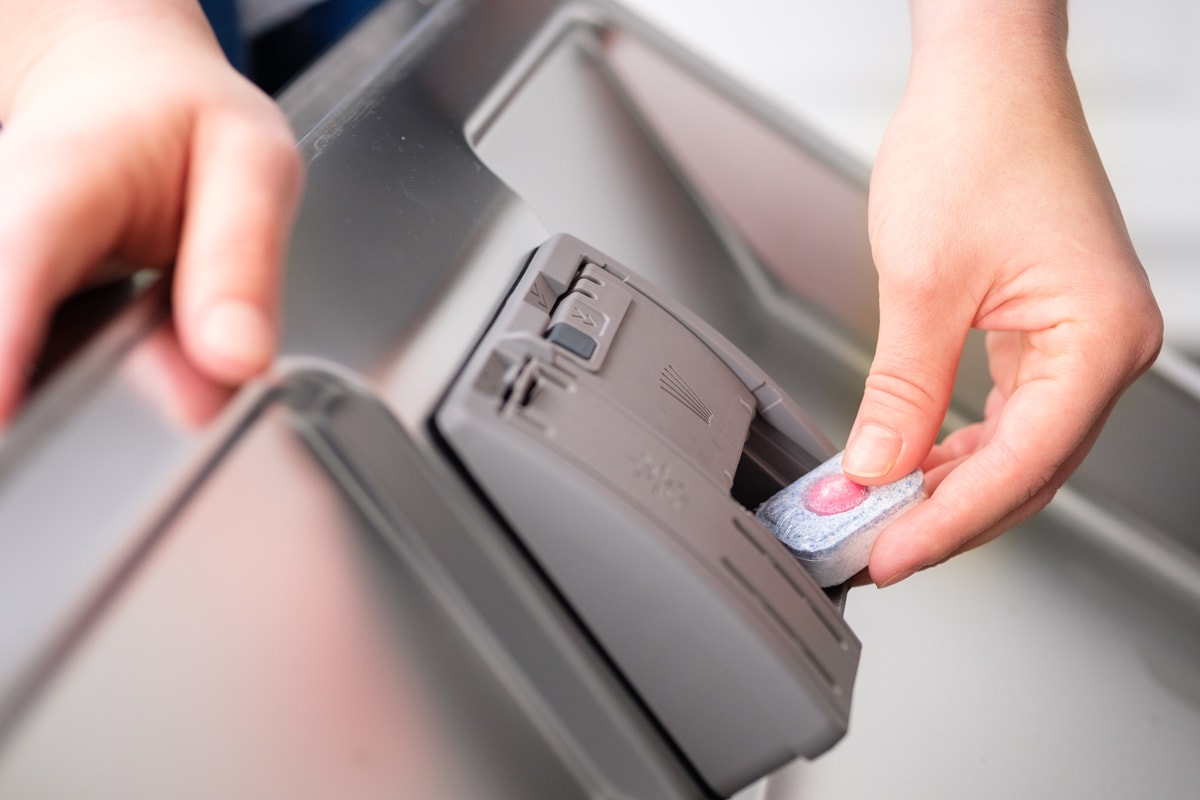 We are pleased to share this guide on what to do when soap doesn't leave your dishwasher after the cycle. Finally, you'll be able to enjoy that tasty pumpkin soup you've been craving.

Does A Dishwasher Heat Up Its Own Water?

Kenmore Dishwasher Not Spraying Water – What To Do?