Few ingredients are more critical when baking than eggs. The glue that holds a recipe together, too little or too much, can ruin a tasty dish. But eggs can be a tricky ingredient for a recipe. Do you strictly go by the number of eggs, or should you weigh the amount of egg going into your dish? Is just throwing in several eggs the best way to go about it? Here at Kitchen Seer, we've researched these questions and more and answered all your questions on baking and eggs below.

A lot of baking recipes require absolute precision, and this includes measuring eggs. The majority of standard American baking recipes are based on grade AA large eggs, weighing approximately 1.66 ounces, or 50 grams, per egg without the shell. Their weight is equal to their liquid volume because shells can vary in thickness and thus weight.

Baking requires a lot of finesse and precision at times. Please continue reading below as we dive more into the importance of knowing how to work with eggs in your baking. 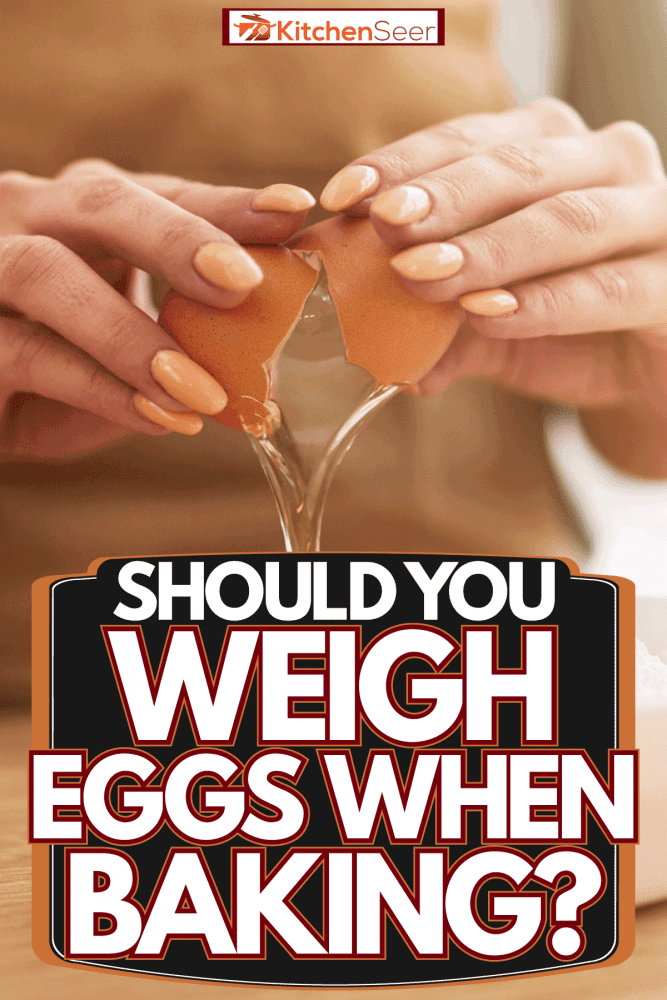 Should You Weigh Eggs When Baking?

If you don't have large eggs in your pantry, do you need to weigh out the eggs you are using? Is approximating ok to do? Well, as with a lot of baking, it depends on what you're trying to make.

For some recipes, you can get away with some wiggle room when it comes to eggs. One good rule of thumb to keep in mind is how many eggs are required in a recipe. The more eggs your recipe calls for, the more precise you should be with your sizes and measurements. 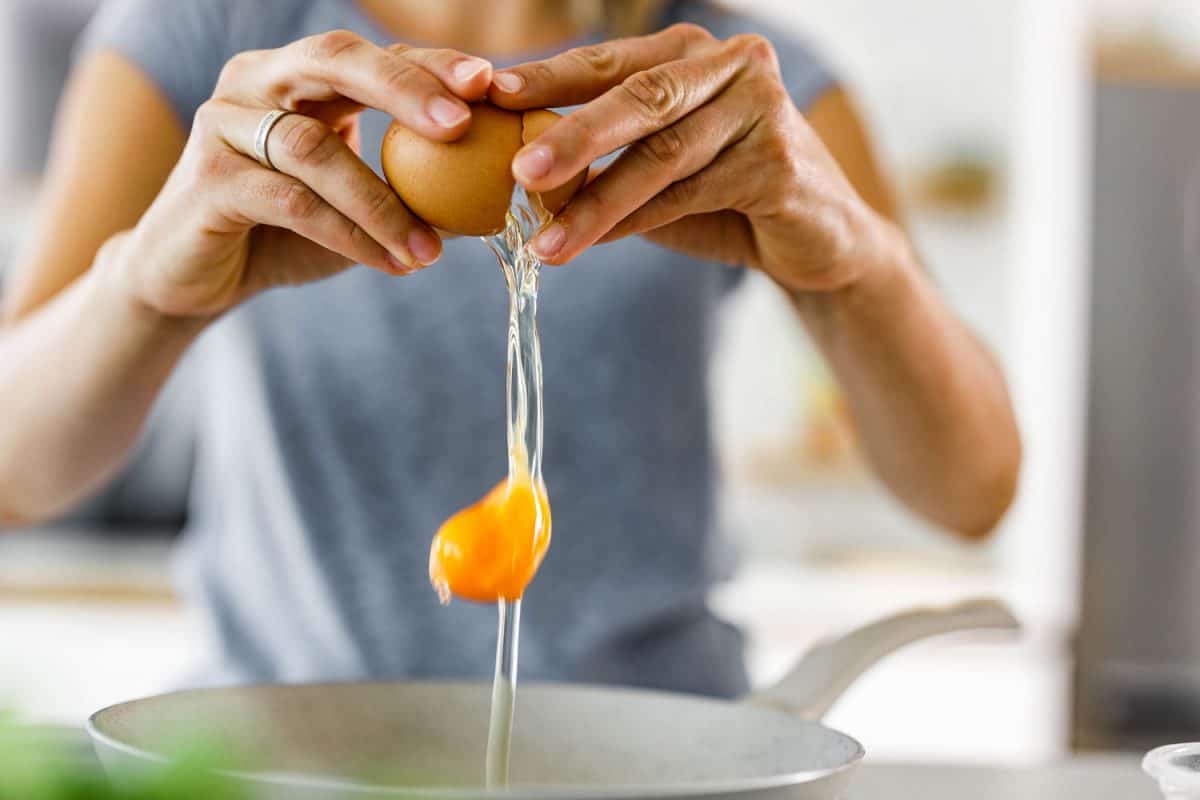 Consider a recipe calling for four eggs.  As you add them in, the difference between a two-ounce large egg and a two and a quarter ounce jumbo egg adds up. That's an additional ounce of egg the recipe didn't call for!

There are also instances in which the eggs are the starring ingredient. These are recipes where eggs play a significant role in the success of your confection.

Some foods rely on eggs for leavening, like meringues and sponge cakes. And then there are the confections that need some egg for thickening like lemon curd and pastry cream. If you use too little egg in these recipes, they quickly end up flat or too thin. Too much, and they'll tip over or be far too thick.

Then some recipes call on eggs for their flavor; flans, sponge cakes, custards, for example. Not enough egg in these foods will mean a distinct lack of that trademark eggy flavor that makes these dishes so delicious.

Read now on Kitchen Seer: 'Can you cook eggs in a Ramekin?'

What to do without large eggs

These are some examples of finicky recipes that require a relatively precise amount of egg to work. As stated above, if you're using a size other than the standard large egg, those differences can add up. What can you do when your eggs are medium or jumbo? Well, you're likely going to have to break out the scale at that point.

If your recipe calls for 'three eggs,' you'll need to crack, whisk and weigh your egg until you reach about 150 grams. Feel free to save any extra or unused eggs for tomorrow's breakfast or side dish. There's no reason to throw it out.

In the end, for all but the most sensitive of recipes, not weighing your eggs will still give you a cake or a pastry. It might not yield the result that the recipe was calling for, however. Eyeballing it or precisely measuring it will ultimately be up to you and your tastes and comfort level.

Does egg size matter in baking? 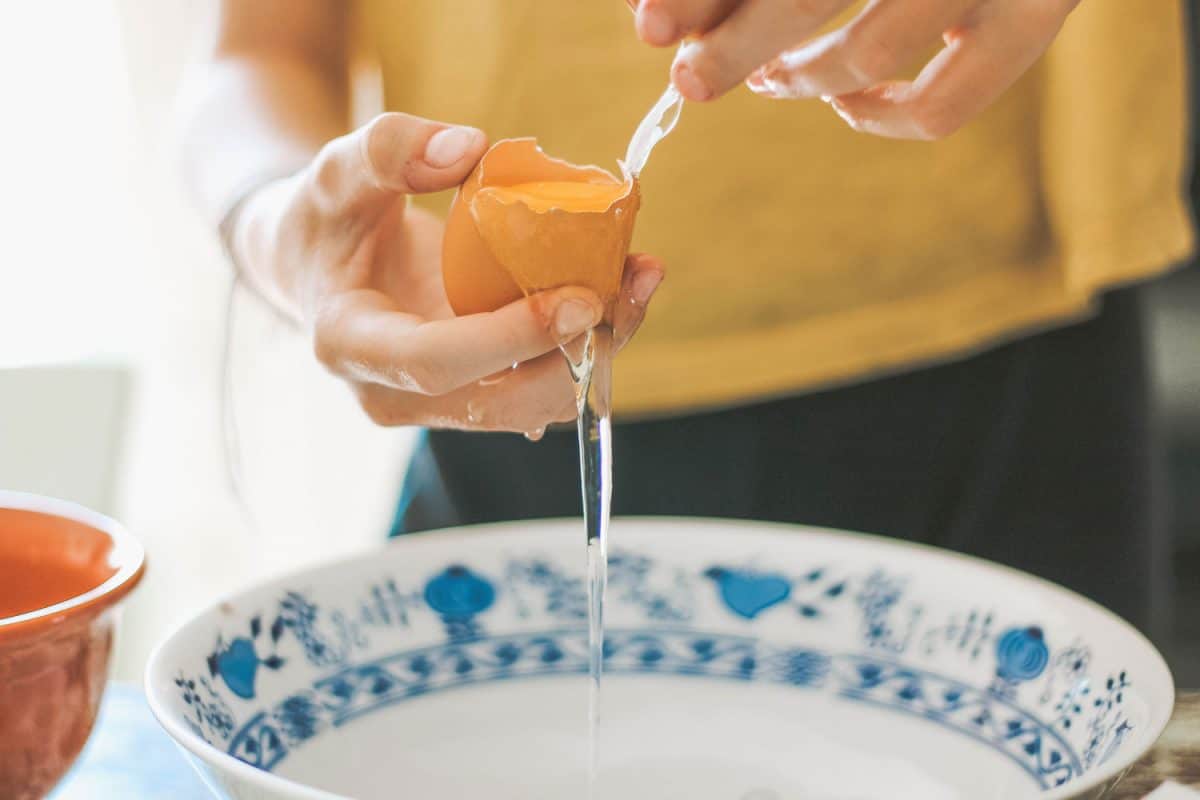 When it comes to dishes like scrambled eggs, egg size doesn't matter. Just toss in as much as you're feeling and go to town.

But baking is such a universally precise process that the size and amount of egg you utilize can start to impact things down to several grams here and there. Since all numbers for the weight of eggs of a specific size will be averages, the only real way to get specific weights for your eggs is to weigh them.

Using larger or more eggs in a recipe means your brownie, for example, will be cakier as opposed to fudgy. Dryer cookies with less egg will crumble apart much easier than the fluffy batch you made with more egg.

Egg size comes into play when your recipe asks for fewer or more eggs than on average. This is where precise measurement and using the right amount of egg comes into play.

Recall that almost all recipes are using large eggs as their 'egg' mentioned when they call for eggs. You'll have to get the right amount from whatever size egg you have and match it to the recipe's expectations.

This can lead to unwanted food waste if you are using eggs that are too big, or unnecessary mess and expense if using too many smaller eggs. But if you weigh them out, you should get just what the recipe's asking for.

Read now on Kitchen Seer: 'Should you whisk scrambled eggs?'

How much should a large egg weigh for baking?

Large eggs, on average, contain 50 grams of egg without the shell, and before separating the yolk. Keep in mind that even with standards and practices, eggs are going to vary by their very nature. There's simply no way to get truly uniform eggs from the source.

Fifty grams is typically expected of one large egg from a recipe. If asking for three eggs, a recipe for a batch of cookies is essentially asking for 150 grams of egg.

However you get to that 'X eggs' worth of egg will be satisfactory, as recipes call for egg size really as a means of 'how much' instead of 'this specific egg.'

How much does an egg weigh after being soaked in corn syrup?

Soaking an egg in corn syrup for 24 hours will cause the egg to shrink fairly significantly due to the process known as osmosis. You'll first need to deshell the egg by dissolving the egg in vinegar.

Water concentrations within the egg will be much higher than the surrounding outside corn syrup, and therefore, the water will want to move from a high concentration to a low one.

In one example, an 81-gram, 6'75 inch egg shrunk almost half its size down to 47 grams and lost an inch off its circumference. Interestingly enough, you can reverse this process by placing the shrunken egg back into a water solution for another 24 hours. In this example, the egg expended up to 84 grams and expended up to 6' in circumference.

How do you weigh eggs for baking? 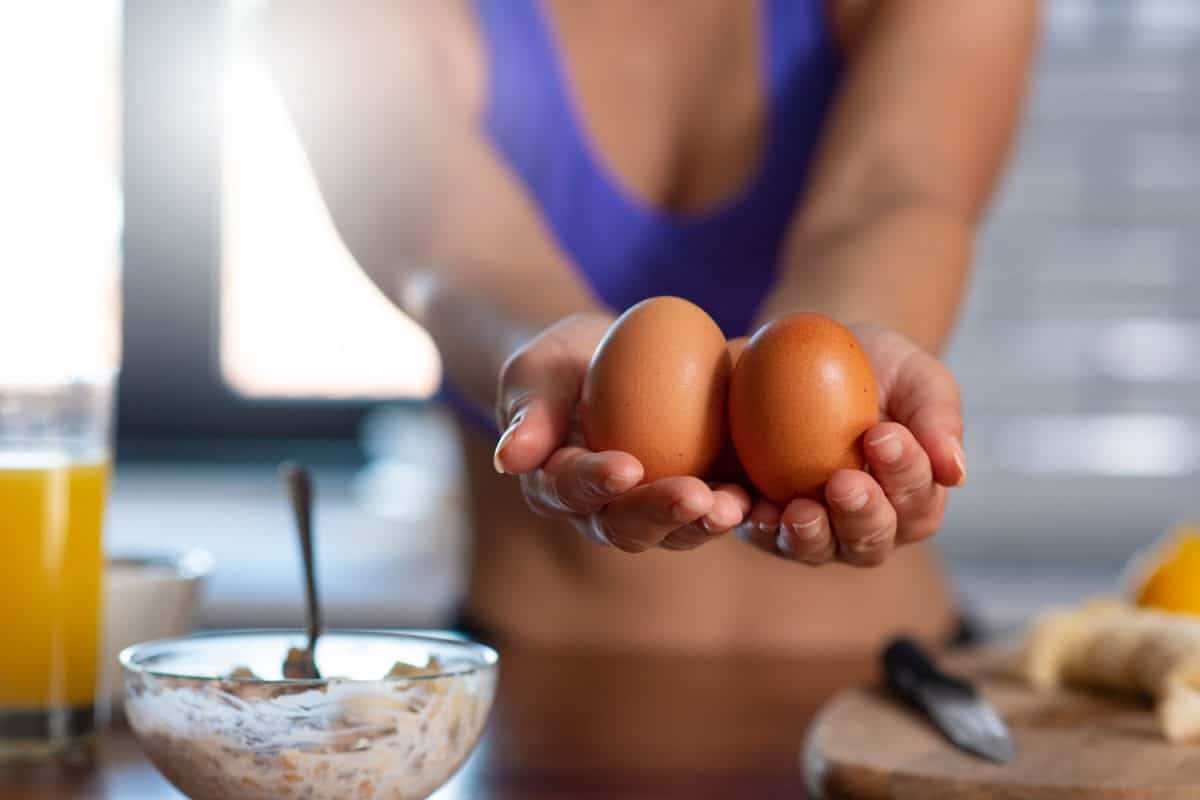 A digital baking scale is a quick and easy way to weigh your eggs for baking in recipes. Put a dish on your scale and weigh it so you can subtract the weight before starting.

Begin breaking your eggs one at a time into the container. Watch the scale until you get the right amount of grams for what's being asked of you. Discard the shells and don't include them in your weight, as they obviously will play no part in your recipe.

If your recipe only calls for one part of the egg, such as the whites, you'll need to separate these before weighing them. This will ensure sure you have enough of the desired part of the egg.

It's alright if you are off by a few grams here or there. Do make sure not to allow it to add up to a considerable discrepancy, as previously mentioned.

Baking is an experience some come to feel over time. Including measurements and recipes, everything is felt and eyeballed instead of measured out precisely. This is just how a lot of people like to bake, and for many recipes, it works out. But given the importance of eggs in so many delicate recipes, taking the time to measure it out and make sure you're getting just what is called for can go a long way.

We hope this article has taught you some key differences in egg sizes, how they are incorporated into most recipes, and how you can best achieve the many wonderful flavors and textures that eggs bring about in baked goods.

What Oil Is Best For Grilling Steak?

What Desserts Go With BBQ Ribs?