The processes you think you should follow for preparing certain dishes might be different than expected. This couldn't be any more true than with cooking potatoes. If you've always been adamant about peeling and cutting your potatoes before you begin boiling them, this post is for you. We researched different methods of preparing potatoes from various sources and can help settle this question once and for all: Should potatoes be peeled and cut first?

Whether or not you should peel and cut the potatoes before boiling depends on the type of potato you're cooking, as well as the dish that you are preparing. For times that it's best to leave the skin intact until after they are boiled, it's even more important that the potatoes are thoroughly washed first.

Now that we know that whether you should cut and peel potatoes before boiling them will depend on several factors, we'll go into more detail. You might also be wondering how soon you can cut the potatoes before cooking them or what kind of potatoes are best for boiling. To see what we've discovered, read ahead in this post. 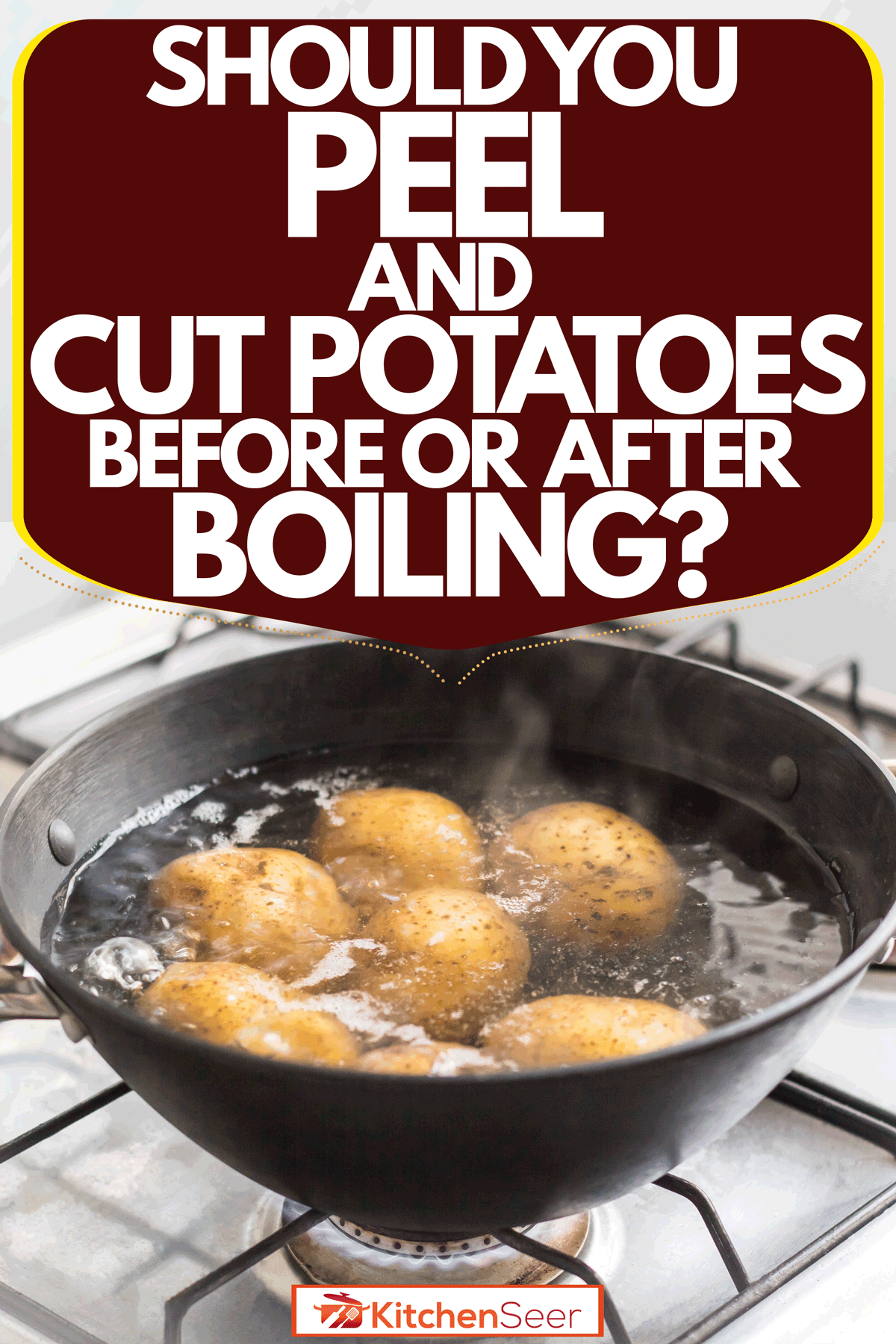 The Cutting And Peeling Process Of Potatoes

Before we get into how to cut and peel potatoes, it's important to note that the first step should always wash these tubers. They grow in the ground, so no matter how clean your local grocer's produce section is, you need to clean them before cooking them. Use cold water and a soft sponge or brush to remove all of the dirt and debris. Just be careful not to apply too much pressure and remove the skin. 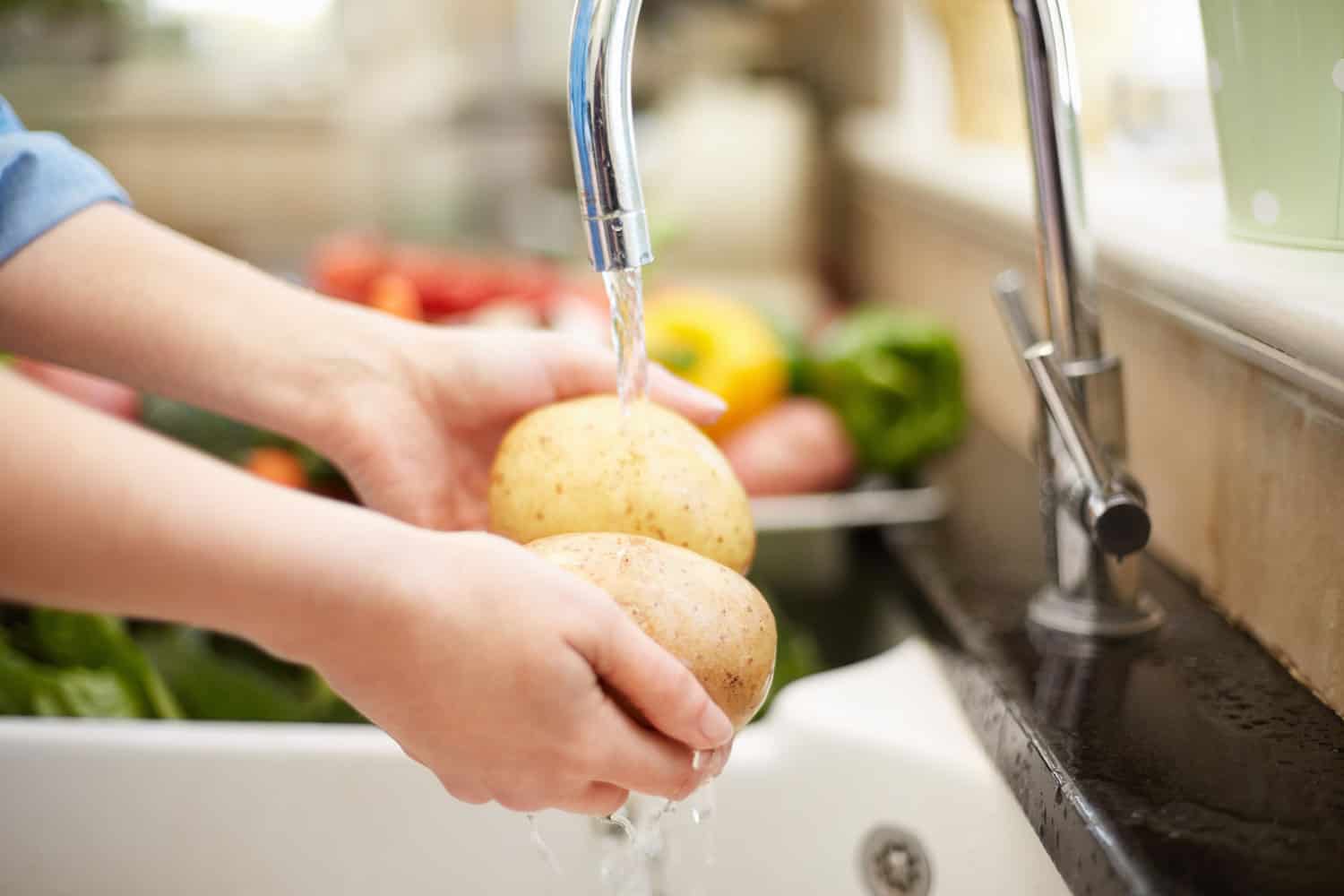 To Peel or Not to Peel?

Now, do we peel and cut first, or boil first? Without a doubt, potatoes will cook much faster if they are cut into smaller pieces. When a potato cooks, the moisture inside of it increases in temperature. This heated moisture helps to cook and soften the potato. So we should always at least cut them up before we boil them, right? 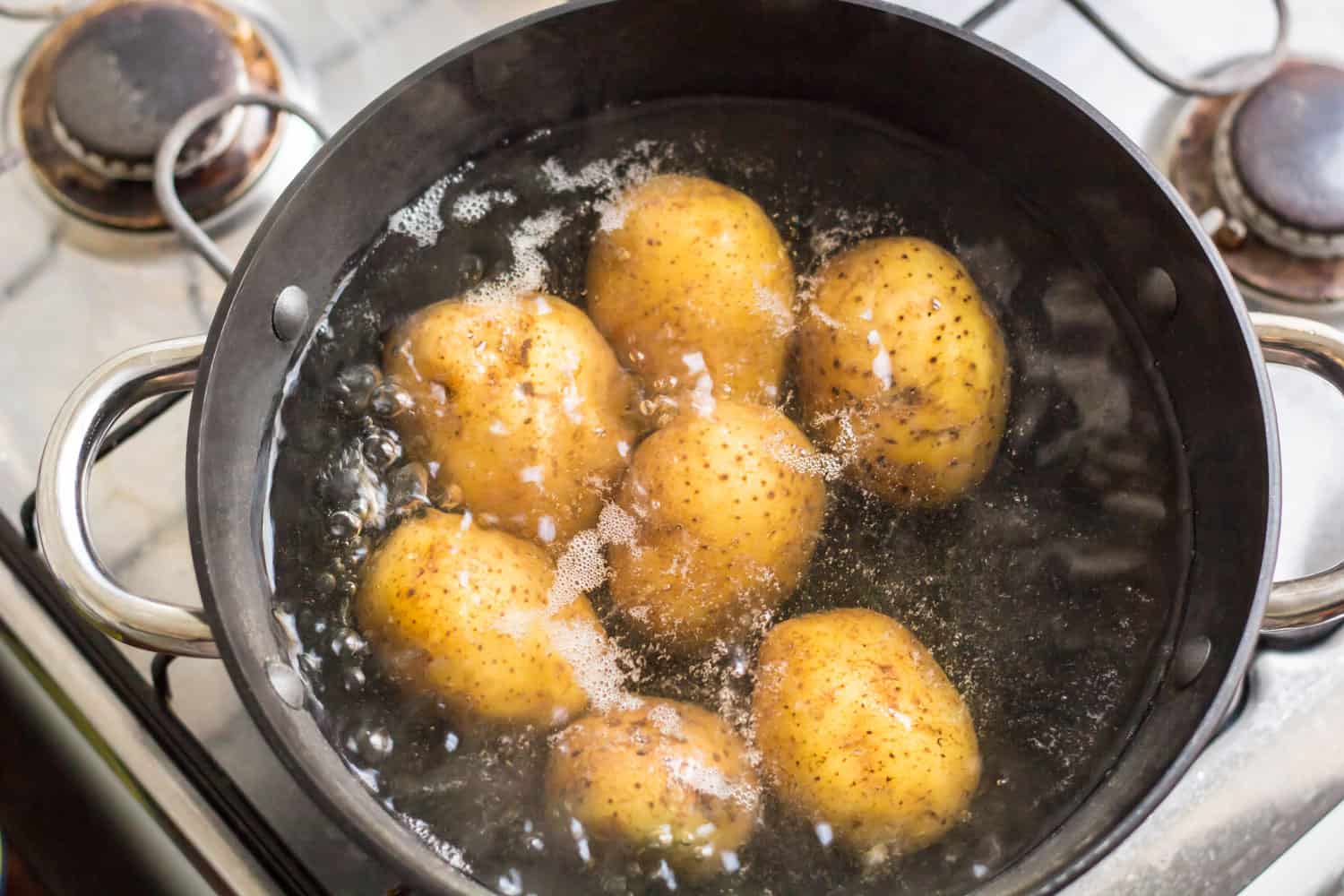 If you're using starchy potatoes, like russets, boiling them with the skins still and with the potatoes uncut is best. Granted, it will take longer for them to cook, but you'll be leaving the skins on for a good reason. The thick skins serve as a protective layer for the interior of the potato. If they are peeled and cut, then there is no barrier against the boiling water. This water will soak into the potato, leaving you with a watery mess when you're finished.

When they are finished boiling, the potatoes can be easily skinned and cut.

If you're using waxy potatoes, like fingerling or red potatoes, cut them up before boiling them. These varieties contain a lot less starch than russets and won't absorb water in the way that they do.

When it comes to making potato salad, you'll want to be sure that you follow specific protocols. If you cook the potatoes too long, they'll be too mushy for this dish. Undercook them, and you'll be stuck eating something extremely hard and chewy.

Choosing the right kind of potato is critical for potato salad. Red potatoes work best because they are waxy and able to hold their shape when being cooked. Russets will fall apart, no matter how careful you are.

Leave the skins intact, but cut the potatoes into the desired wedges or cubes you want for your potato salad. For best results, follow the instructions put forth in this delicious recipe we found:

We found this gem on tasteofhome.com, and it's a perfect recipe for holidays and picnics. This recipe stresses the importance of properly cooking the potatoes and how allowing too much water to invade them will make your dish watery. 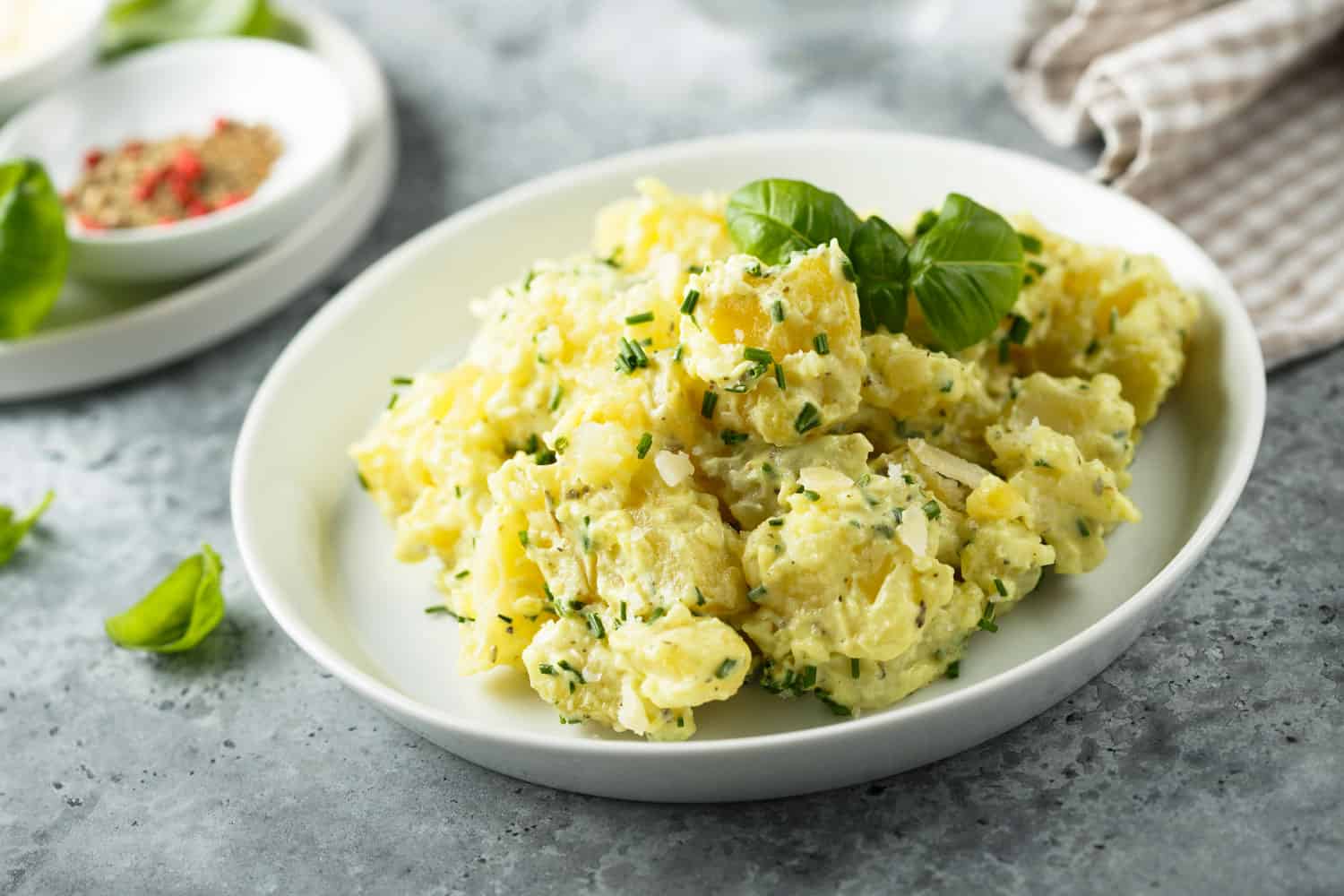 How Soon Can You Cut Potatoes Before Cooking?

The amount of time you can leave potatoes after cutting them will depend on how big the cut pieces are and how you're storing them.

Diced potatoes kept in water will waterlog fairly quickly, so it's recommended not to cut them up unless you're going to cook them in the following hour or so.

If the potato is cut into large pieces, you can expect them to be ok for eight hours.

How Long Can Peeled Potatoes Sit In Water?

If you're like most people, a busy schedule will interfere with prepping for a larger meal. The busiest of us always find ways to prep foods in advance so that less time has to be devoted to cooking dinner. If your menu calls for a potato dish, how long can you leave the peeled potatoes in the water?

Thankfully, nature will allow for peeled potatoes to safely sit in water for up to twenty-four hours. Just be sure that they are in a covered bowl and stored in the refrigerator.

What Kind Of Potatoes Are Best For Boiling?

The less starchy the potato, the better it will be for boiling. High starch content will allow a tuber to absorb more water. Waterlogging potatoes will make them break apart and become mush if you're not careful.

While you can boil and enjoy any potato, the best ones to boil are red potatoes and fingerling potatoes. They have less starch, and their waxy texture allows them to keep their shape when cooking.

How Do You Boil Potatoes Without Them Falling Apart?

If you're concerned about your boiled potatoes turning into much, try selecting a lower starch variety of tuber. Red potatoes, white potatoes, and Yukons have a much lower starch content than russets. Less starch means less water absorption. It's the water content that will cause your potato to fall apart.

If you insist on using russets or another high starch content potato, try letting the potatoes sit in ice-cold water for twenty minutes before you boil them. Leaving the skins intact will also keep them from falling apart.

You'll also want to keep the heat a little lower than you might think. After they begin to boil, take some of the heat away to simmering until finished. Carefully remove them, and set them out to air dry for a bit on a few layers of paper towels. This will rid the potato of excess moisture and help keep it together.

In this post, we discussed why you should follow certain processes when cutting and peeling potatoes. The process will vary based on the type of potato and the dish you're cooking. When in doubt, follow the guidelines set forth in the recipe that you're using.

Potatoes can be prepped in advance and can be cut and stored for a short amount of time before being cooked. Keeping them in water will stop them from getting discolored, but too long in the water will waterlog them and make them mushy. Certain types of potato will boil better than others. How well a potato keeps its shape while being boiled is based on how much starch it has and how waxy the potato's texture is.

If you've enjoyed reading this post on cooking, we believe that you'll find the following posts informative:

14 American Staple Foods That Should Be In Your Pantry

Steam Vs Water Bath Canning: Which Is Better?

Should You Oil A Pizza Stone?

Do You Have To Cook Canned Black Beans?