Coconut oil is increasing in popularity in the world of cooking oils. Because of its potential health benefits, many people are trying to find ways of incorporating coconut oil into their diets. Have you ever wondered if you could bake with coconut oil? Do you need to melt down before using it in baking? We have thoroughly researched this topic and have the answers you're looking for.

When baking with coconut oil, you do not always have to melt the coconut oil before using it in your recipe. When coconut oil is melted, it is an excellent substitute in recipes that call for melted butter or margarine or vegetable oil. Coconut oil can also be used in baking in its solid form in place of butter or shortening.

Now that you know you can use coconut oil in baking, we will dive more into the wonderful world of coconut oil. We will offer tips and tricks on how to use this versatile oil in your baking. You will also learn how to properly melt coconut oil and the difference between melted and liquid coconut oil. Keep reading to learn more about this beneficial oil. 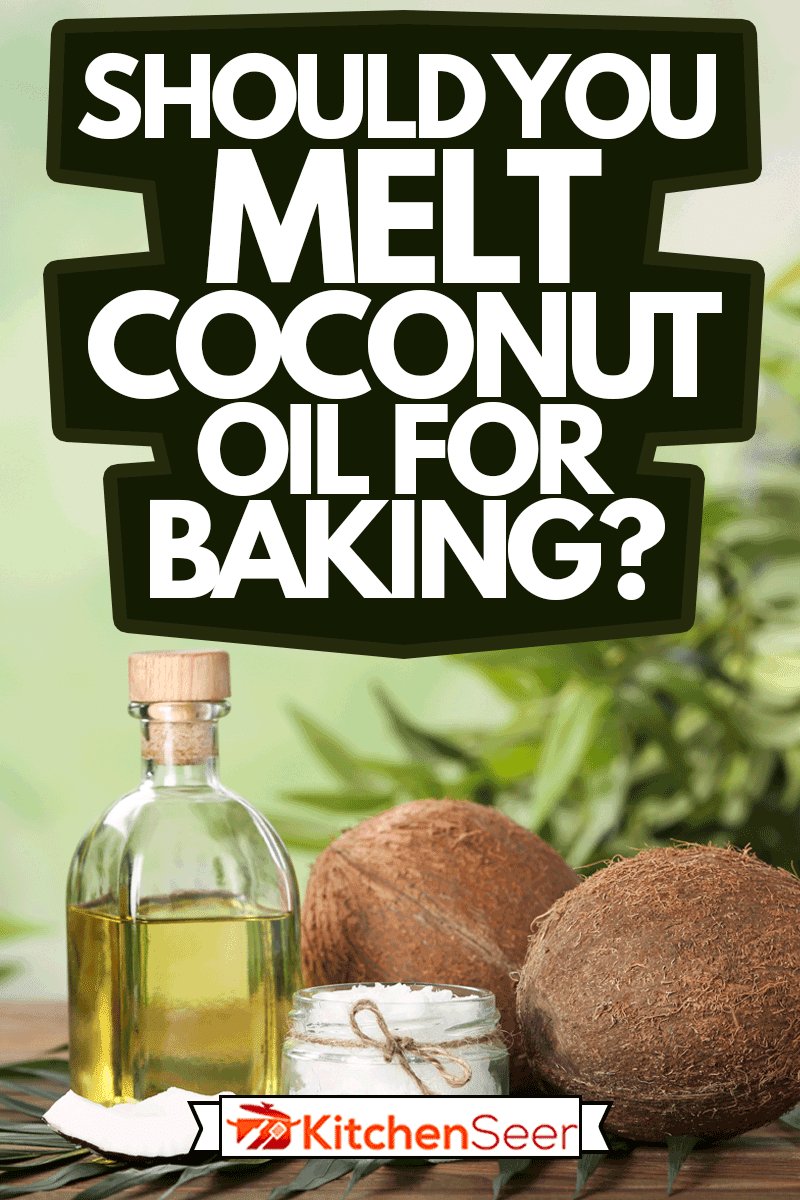 Why You Should Use Coconut Oil For Baking

This must-have oil is considered a healthy fat and contains antibacterial properties. Coconut oil is a must-have if you are looking to bake vegan-friendly desserts. Consider using coconut oil in place of shortening, butter, margarine, or vegetable oil to make your sweet treats a little bit healthier. A little hint of that tropical flavor can also jazz up your recipes.

Click here to find this coconut oil on Amazon.

Unlike many other kinds of cooking oils, coconut oil can be in solid or liquid form, depending upon the temperature. Coconut oil's melting point is 76ºF. If you store coconut oil in temperatures cooler than 76ºF, it will become firm and solidify. Coconut oil will melt when heated, causing it to become a liquid. 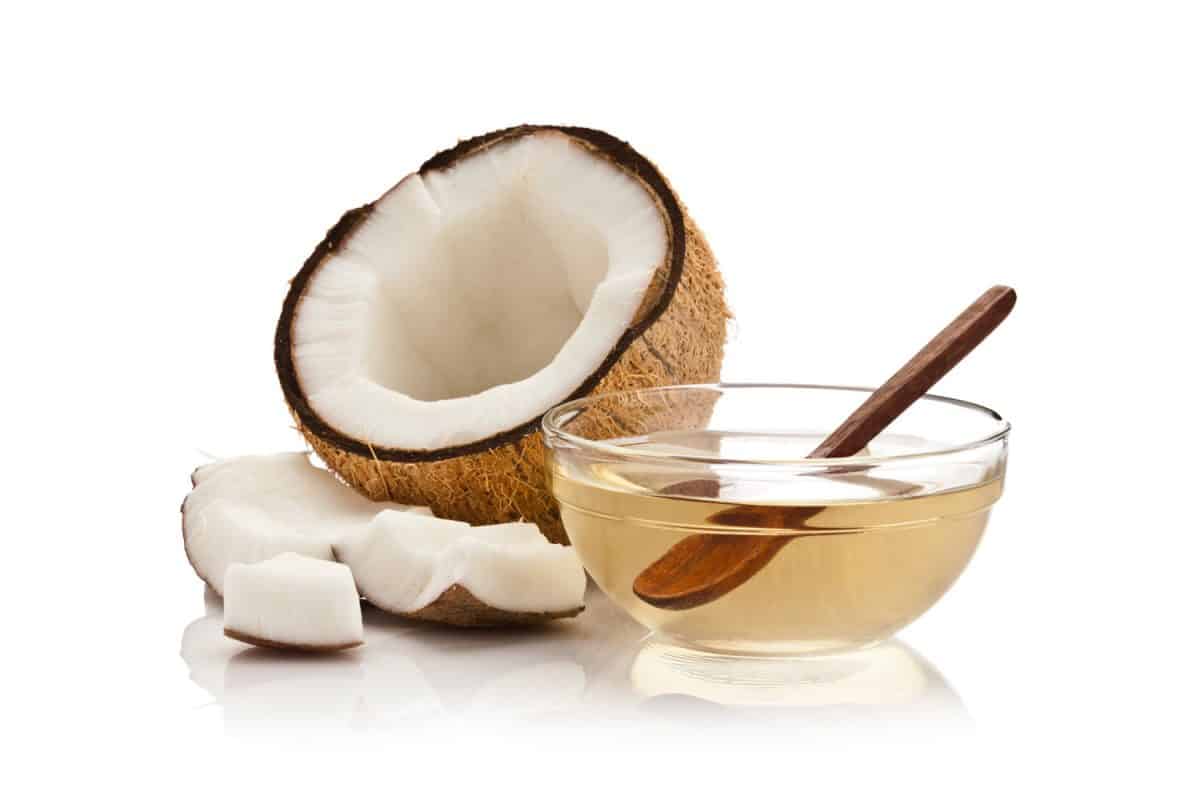 Coconut oil is a fabulous baking alternative in recipes that call for melted butter or oils such as vegetable oil, canola oil, or olive oil. The ratio for the substitution is always a one-to-one ratio. Equal amounts of coconut oil can be substituted for any of these fats in a recipe.

You should always use room-temperature ingredients when you are working with coconut oil, especially in liquid form. Liquid coconut oil mixed with cold ingredients may coagulate or seize up. Bring your other ingredients, such as eggs or milk, to room temperature first to prevent this from happening.

Use melted coconut oil in this yummy recipe for almond flour banana bread.

As mentioned above, you can use coconut oil in solid or liquid form. When in solid form, coconut oil works well as a substitute in recipes that call for butter or shortening to be cut into the dry ingredients. Scone or pie crust recipes work well with solidified coconut oil. Because the oil is at room temperature, your baked goods will turn out nice and flakey.

While coconut oil can be directly swapped with butter in baking, the texture may be slightly denser. Coconut oil is 100% fat and butter is only about 80% fat. Just be aware that there may be a slight difference.

Again, make sure your other ingredients are at room temperature. The ingredients will incorporate much easier without seizing. You may also want to slightly soften your coconut oil just as you would butter before adding it to your recipe. Doing this will make the mixing time much faster and easier.

Because of its high smoking point, coconut oil is also great for greasing your cookie sheets, loaf pans, or muffin tins. Use a paper towel or pastry brush to spread the coconut oil over your bakeware.

How to Properly Melt Coconut Oil

Fill a pot a third or half full of water and place it on the stove until it begins simmering. Measure out the desired amount of coconut oil and place it in a heat-proof bowl that will fit on top of your pot of water.  You don't want the water in the pot to directly touch the bowl.

Turn the heat completely off or on low. Allow the steam from the water to heat the bowl and melt the coconut oil. You will have melted coconut oil in 5 to 10 minutes.

Direct Heat in a Pan

Melting coconut oil using this method is much quicker than the double boiler method. Measure out the amount of coconut oil needed and place it in a pan. The large surface area of the pan will melt the coconut oil rather quickly. Just remember not to use too high of heat. The higher the heat you use to melt the coconut oil, the more nutrients it loses. 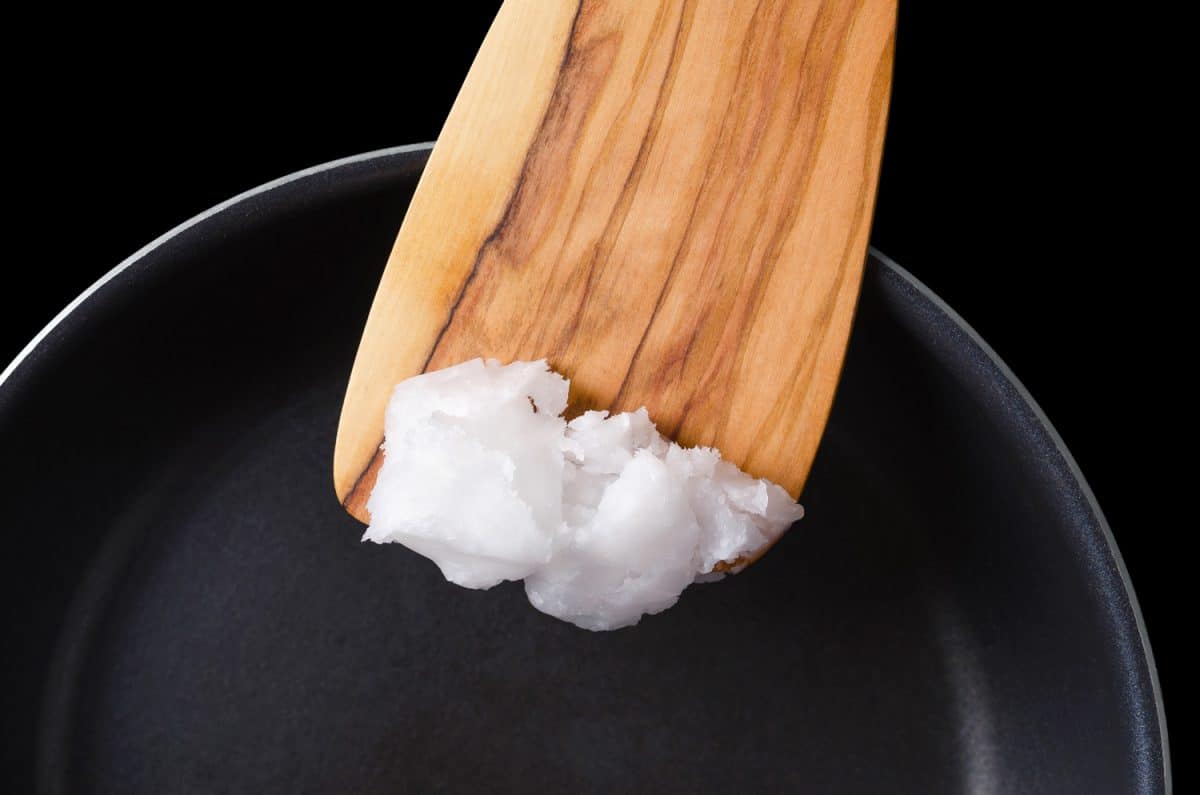 Using a water bath will melt your coconut in a slow, gradual, and gentle manner. You can melt a very small or very large amount using this method. Fill a pot, bowl, sink, or any vessel with hot water. The water doesn't necessarily have to be boiling, but it should be hot, not lukewarm.

Next, measure out how much coconut oil you need and place it in a jar, plastic baggie, or airtight container. Put the container inside the hot water and patiently wait for the coconut oil to melt. After it has melted, dry off the container the oil is in before opening. This method may take a bit of time, so if you're in a hurry, this method may not be the best.

This method is probably the most convenient and quickest of them all, however, you may lose quite a few nutrients microwaving your coconut oil. Scoop out the amount of coconut oil needed and place it in a microwave-safe container.

Use the lowest setting on your microwave, which is often the defrost setting to melt the coconut oil. Microwave the oil in 30-second increments. Keep a close eye on your coconut oil.

We recommend you cover your container with a paper towel to prevent the oil from spattering and making a mess in your microwave. Coconut oil can go from a solid to an exploding mess in mere seconds if not watched closely. 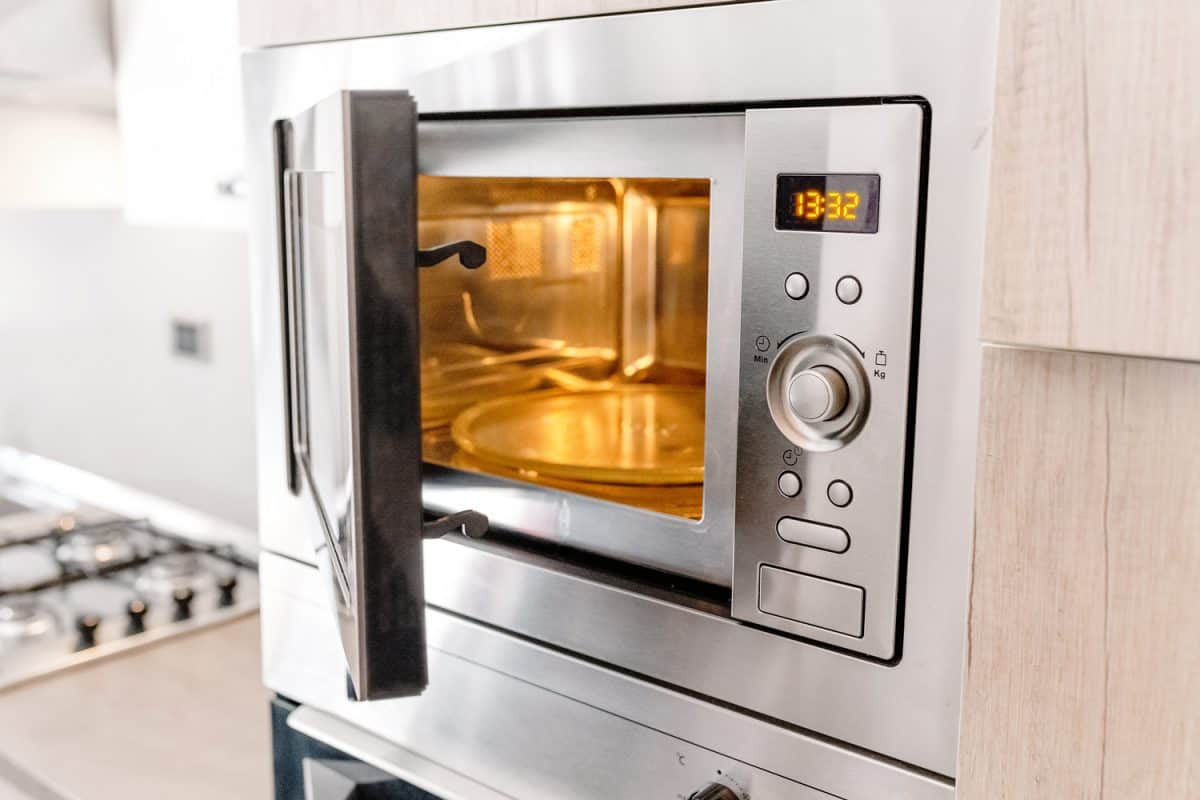 As noted earlier, coconut oil has a melting point of 76ºF. If you store coconut oil at a temperature of less than 76ºF, it will begin to harden and become solid once again. Changing the coconut oil from a solid to a liquid and back to a solid again does not change the quality of the oil. That is one reason this oil is so versatile and well-loved. 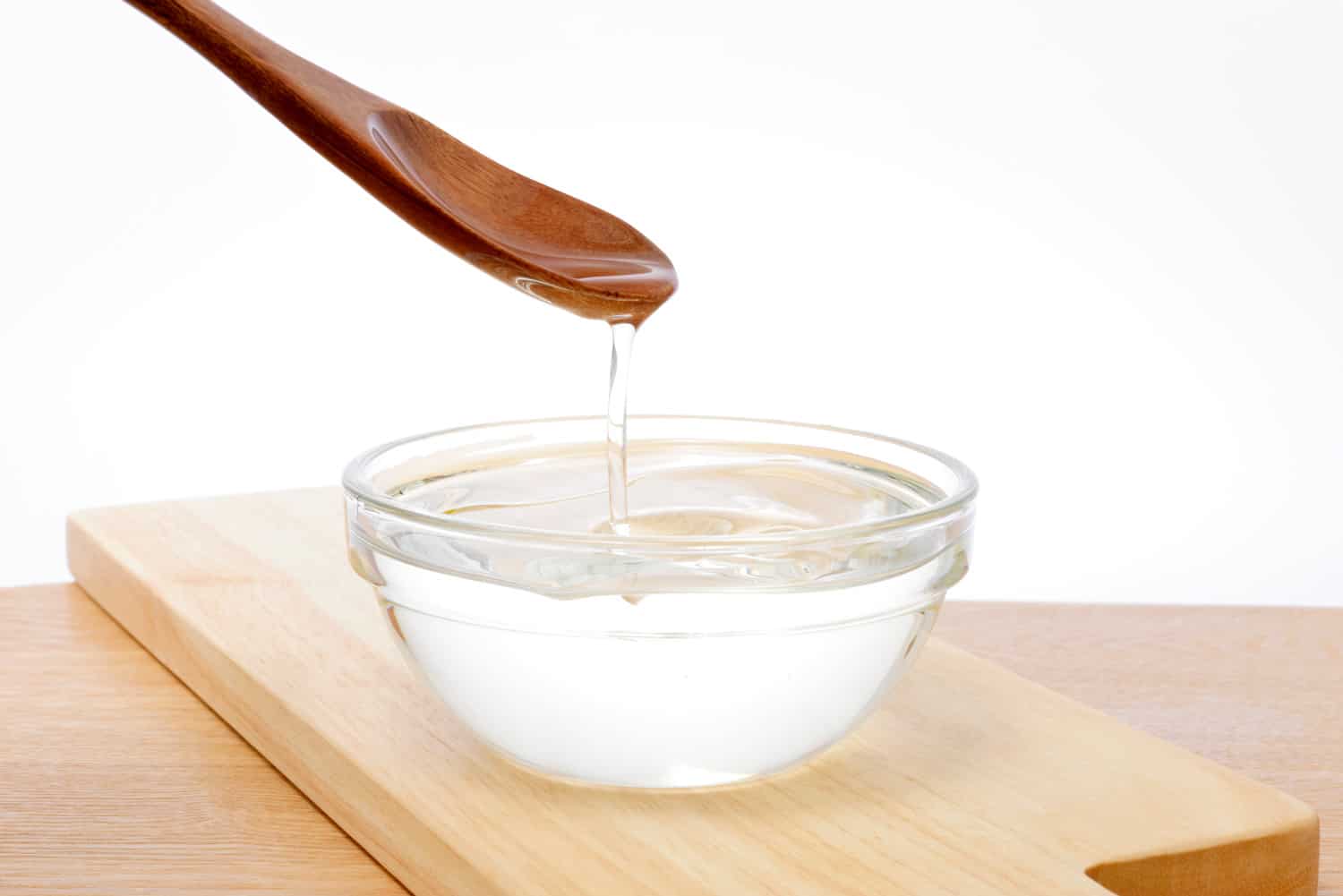 Most saturated fats such as butter, lard, and coconut oil will be solid at room temperature. Liquified coconut oil has gone through extra processing and some of the fatty acids responsible for keeping the coconut oil a solid have been eliminated.

Solid coconut oil is comprised of about 50% lauric acid, while liquid, or fractionated coconut oil, only contains small traces or none at all.

This liquid coconut oil can be found on Amazon. 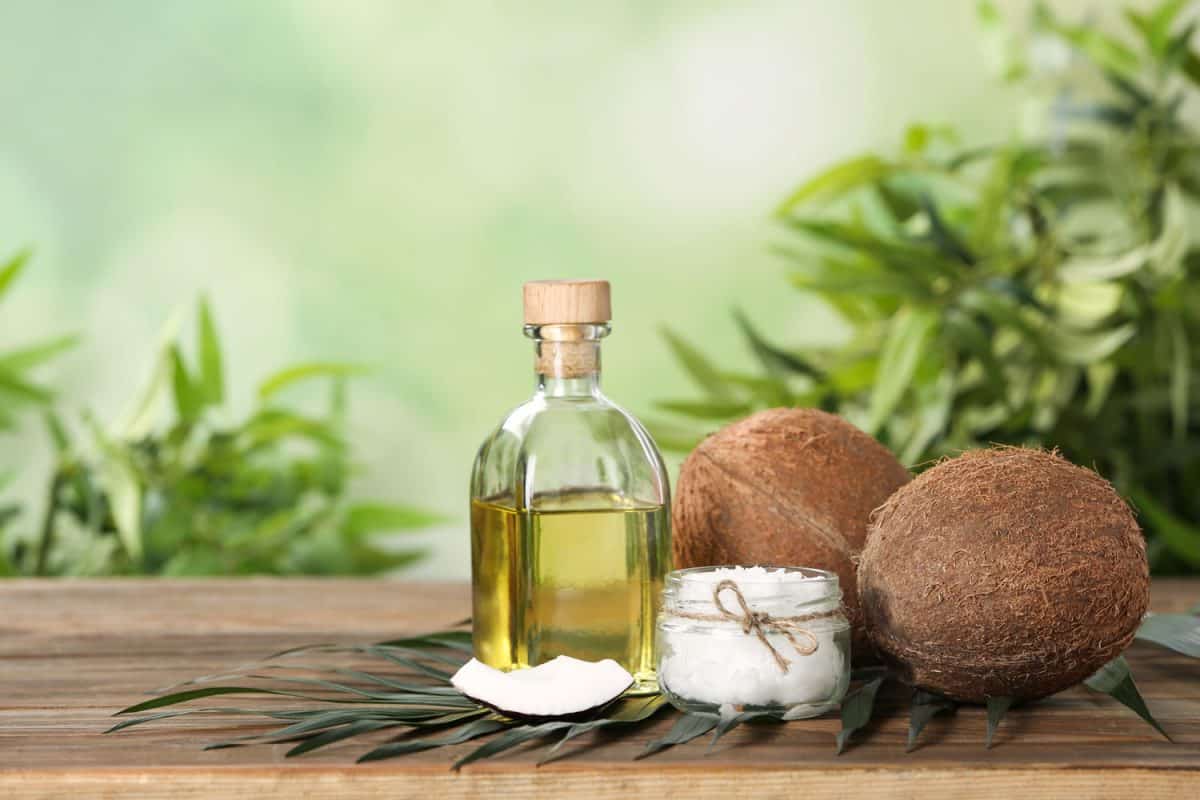 As you can see, baking with coconut oil isn't difficult at all. Melting the coconut oil to a liquid form may be necessary for some recipes, but not all. You may find yourself reaching for this oil time and time again, and soon it may become a staple in your pantry.

Click on the following links for some more baking tips:

Can You Use Sunflower Oil For Baking?

Can You Bake With Almond Butter?

How Much Oil To Deep Fry A Turkey?

5 Best Oils To Use For Making French Fries

How Much Butter To Use In Chocolate Chip Cookies?