If you've ever decided to bake a ham for any occasion, you've probably worried about how it'll turn out after spending some time in the oven. In this post, we will look into methods of baking a ham and whether or not you should cover it while in the oven. We will also talk about common mistakes when baking hams and other suggestions to make them tastier.

When baking ham, it is important to cover the ham itself or the entire pan with foil. This is to ensure that the ham will not dry out during baking and it will not burn the glaze, which typically has sugar in it. There should be liquid in the pan when you are baking the ham so that it will not dry out, and the meat will still be juicy and tender after baking.

We know that baking ham isn't as simple as just putting it in a pan and sending it to the oven to bake. This is why we will be elaborating on ham baking in this post! Keep reading as we discuss tips and tricks in baking moist, juicy ham, as well as ways to make sure that your centerpiece dish will be the star of your dinner. 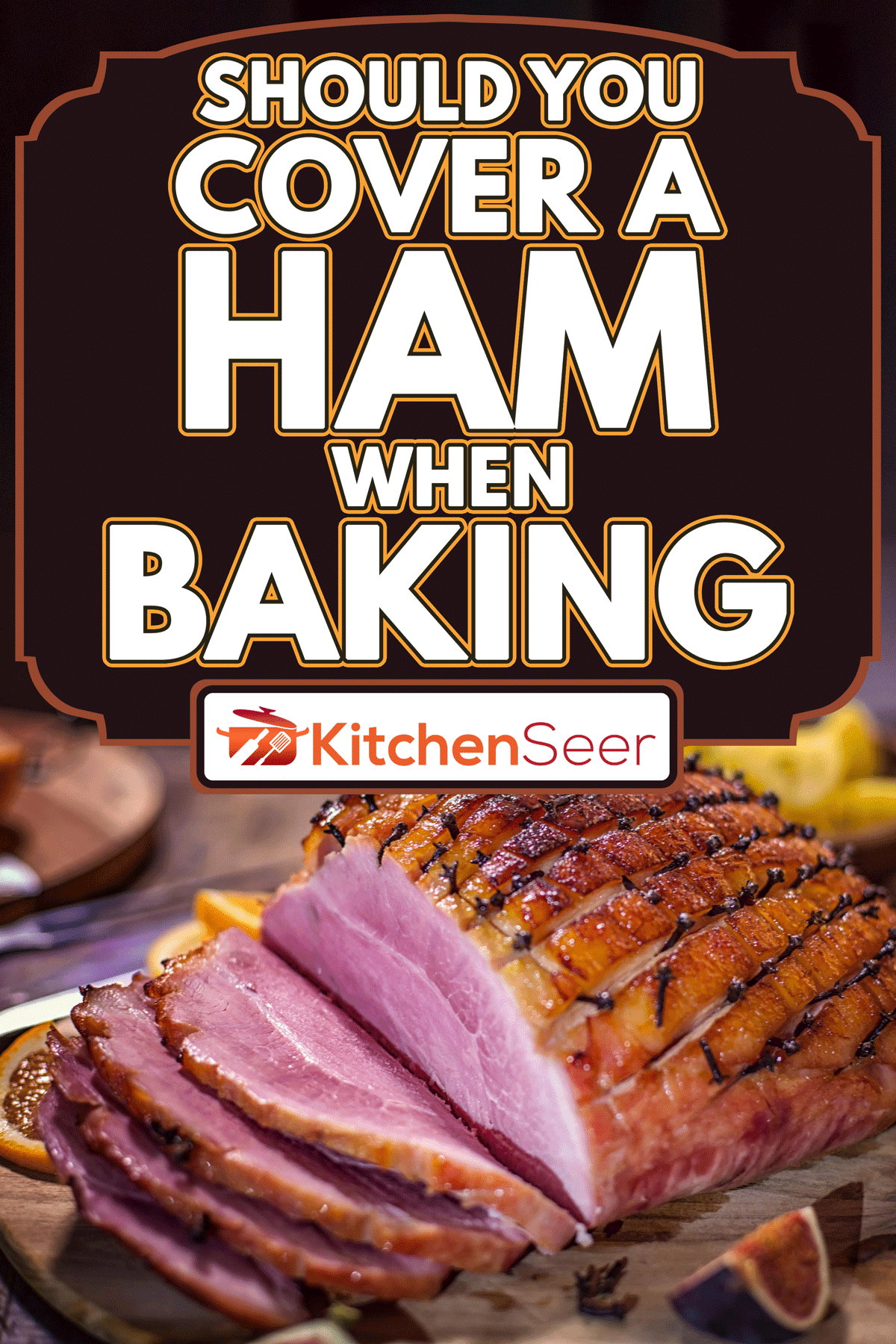 Should You Cover A Ham When Baking

During fancy dinners, you will most likely see a special centerpiece dish that the evening host would be very proud to present to everybody. For some, a great centerpiece dish is a beautifully glazed ham with all the sides to fill the hungry tummies at the table. 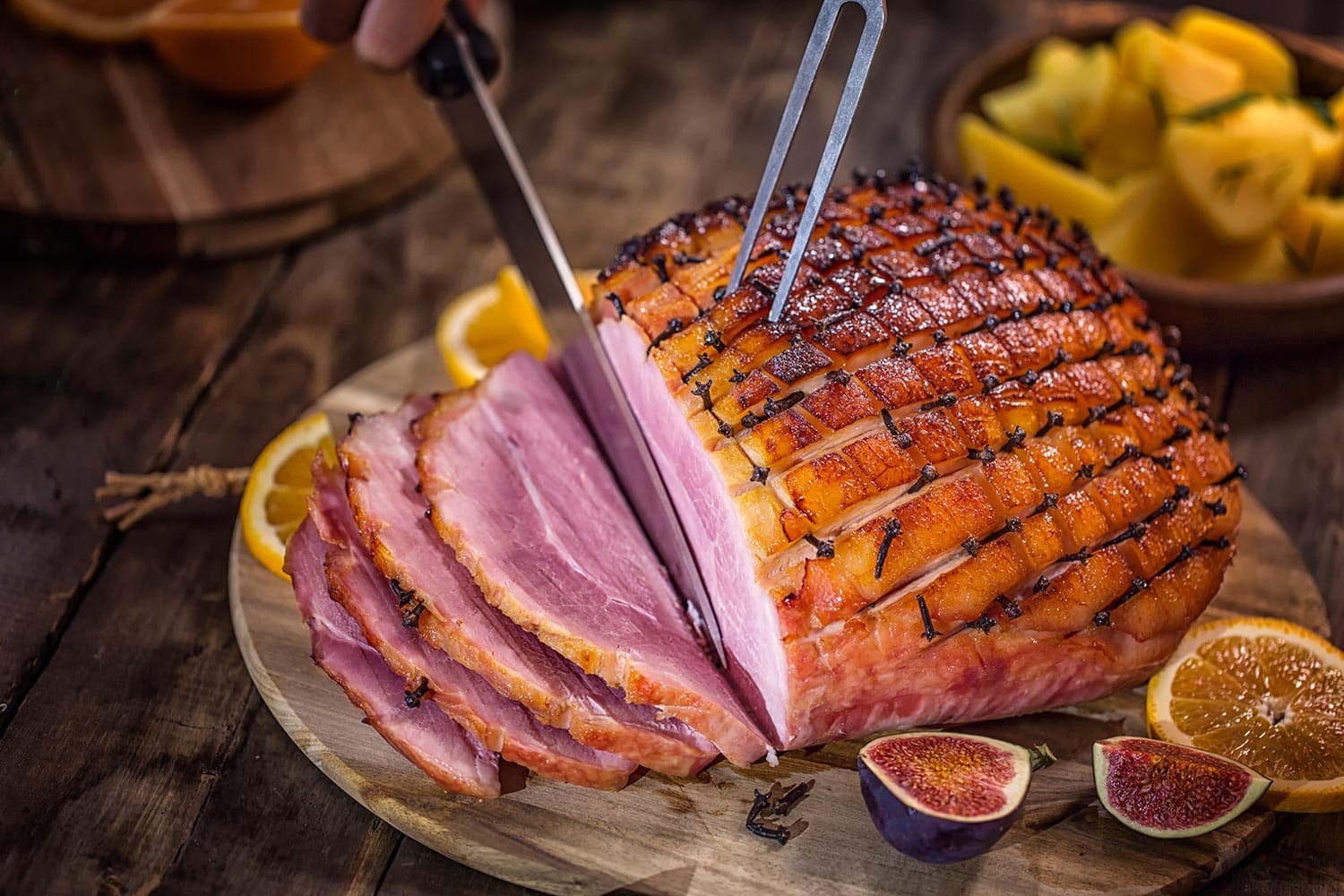 Hams are the pig's hind leg that has been cured in salt, sugar, and nitrates, and it is smoked to give that delectable extra layer of flavor to the meat. Technically, you can cure your own ham at home, but it will take a lot of time and effort. When you're planning for a meal at home, the easiest way is to purchase a pre-cooked ham from your favorite store.

There are two kinds of ham available, namely country hams and city hams. Country hams are generally cured with a dry rub, known for their saltiness. This kind of ham is typically sold raw. City hams, on the other hand, come in bone-in, bone-out, or compressed in a round tin. These hams are brined and smoked, and this is what you will usually get for your holiday dinner.

Since city hams are already pre-cooked, they only need a short amount of time in the oven. You will only need to bake the ham before adding your favorite glaze when the process is almost done. This will give your ham that classic, shiny glaze everyone loves.

When baking your ham, it is important to cover it completely with heavy-duty aluminum foil. This will ensure that your meat won't dry out while baking. Alternatively, you can also cover the entire pan with aluminum foil, but it does tend to steam the ham instead of just locking in moisture.

Ham needing to be baked should be placed in a shallow roasting pan with a rack on the bottom. You should cover the ham with the aluminum foil, leaving the bottom sitting on the rack open. This will allow the fat to drain out of the meat and absorb the liquid in the meat.

Get this roasting pan on Amazon.

Is It OK To Cook Ham Uncovered? 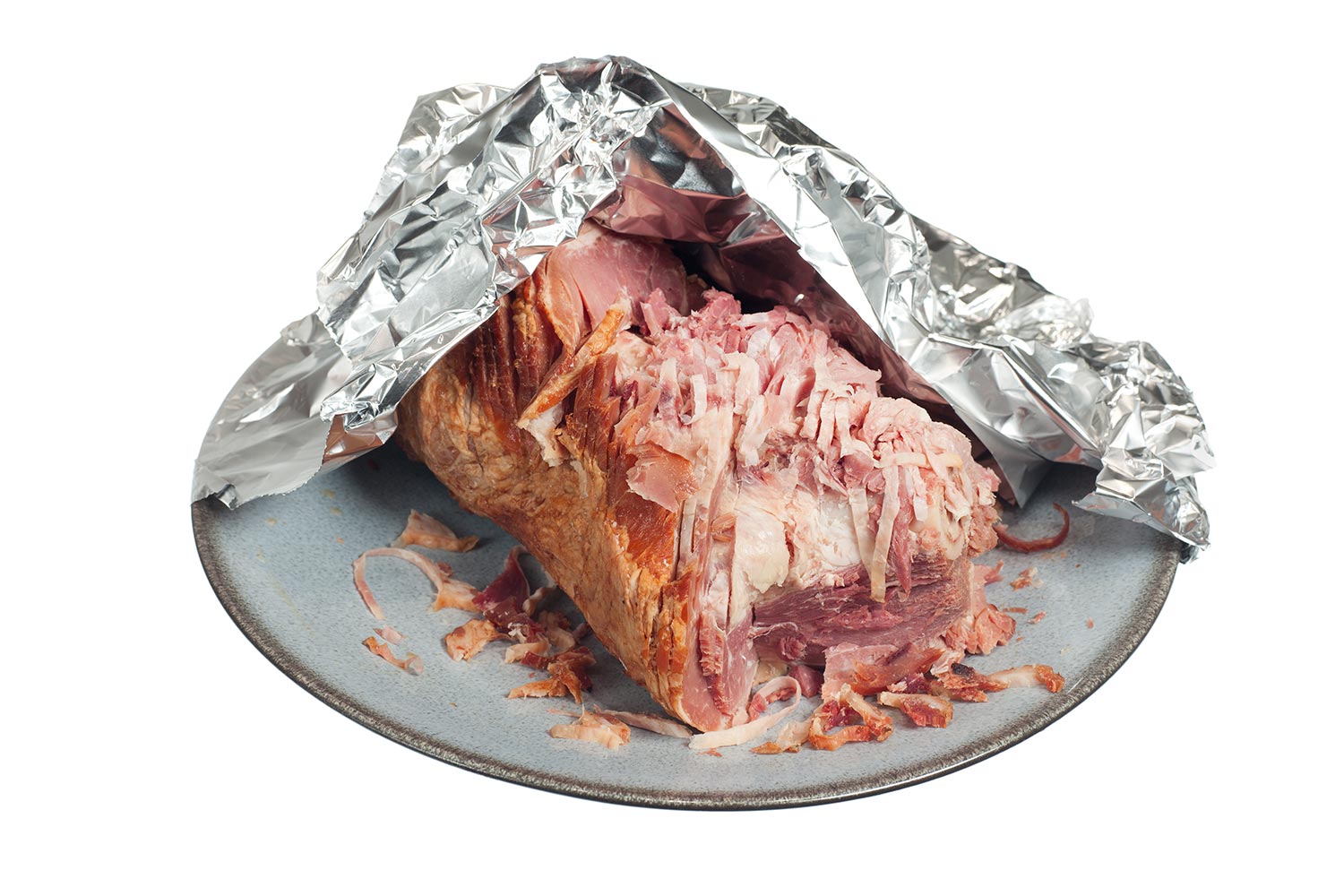 As discussed earlier, it is important to keep the ham covered while baking to prevent it from drying out. However, if you are going to add a glaze to your ham, you need to remove the foil to allow the glaze to stick to the meat. For this purpose, the ham should be cooked uncovered.

After the initial baking time for your ham, you should uncover the meat and brush the glaze all over the ham. Increase the oven temperature to about 400°F and bake the ham 15-20 minutes longer until the glaze is completely burnished on the ham. Make sure to check it from time to time as the glaze does tend to burn, and it might make your ham a little bitter.

How To Keep Ham Moist 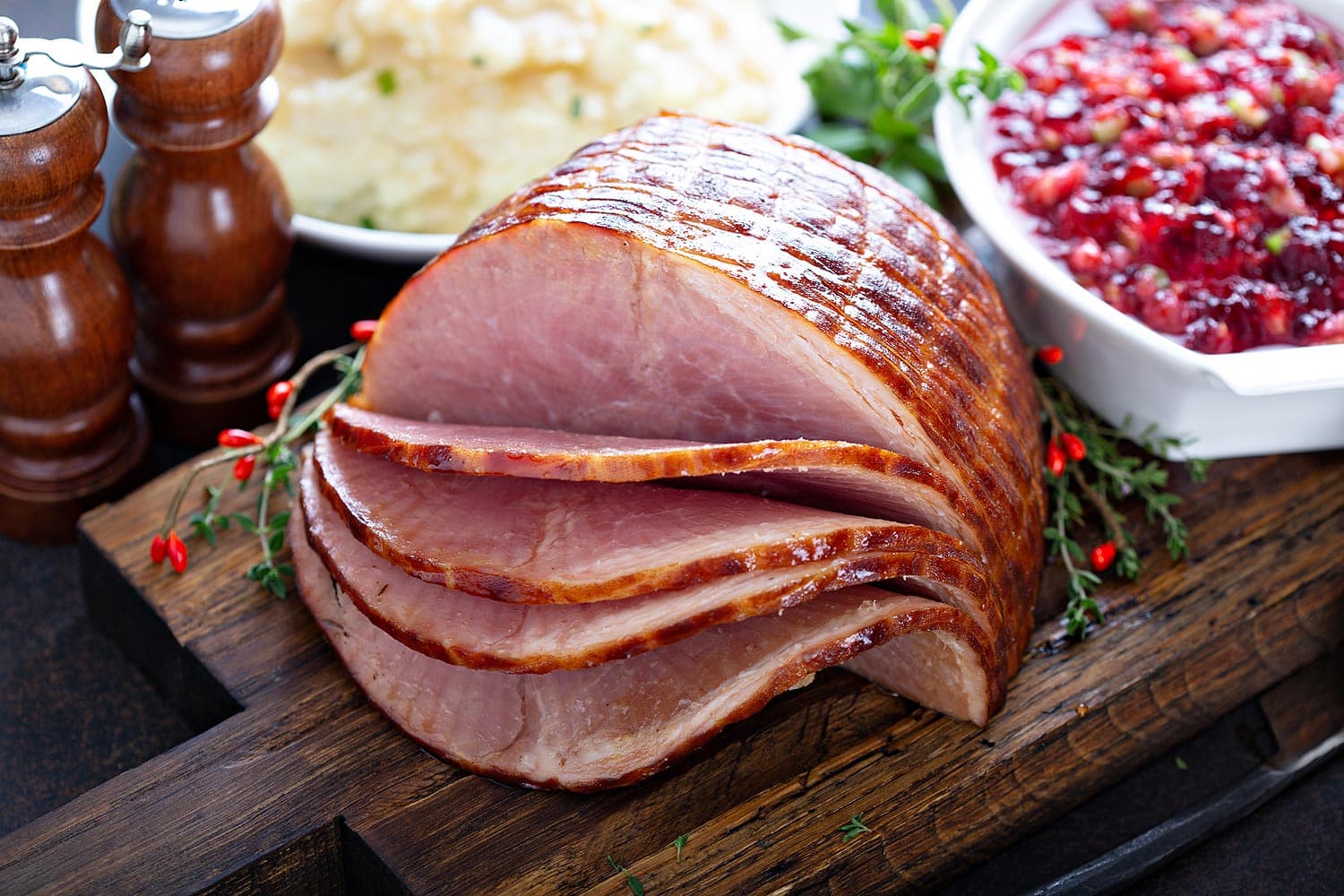 Eating a dry chunk of meat has got to be one of the saddest experiences you'll ever have for dinner. Not only will you feel like you've wasted so much money on a dry piece of meat, but it will also leave you feeling like a failure in the kitchen. Dry hams are typically a problem for some cooks, and here are some ways to keep them moist and juicy.

Cook in Brine or Natural Juices

To keep your ham moist while baking, it is important to know what makes ham really juicy and tasty. When you buy ham, you will usually see the term "ham and natural juices." This pertains to the brine or solution that they have added to the ham to keep it moist in the packaging.

When baking the ham, we should not expect these juices to be the only source of moisture for the ham. Gently cook the ham with 1/2-cup of water, wine, or stock (whichever you prefer) in the pan to keep the meat from drying out. This will also ensure that the flavor will be thoroughly infused with your meat. Don't forget to cover your ham—this is very, very important.

It is also important to prevent overcooking the ham. When the meat is overcooked, it tends to dry out, especially on the insides. The best way to prevent this from happening is by using a meat thermometer to check the ham's internal temperature. For bone-in hams, take the temperature near the bone for an accurate reading.

Check out this meat thermometer on Amazon. 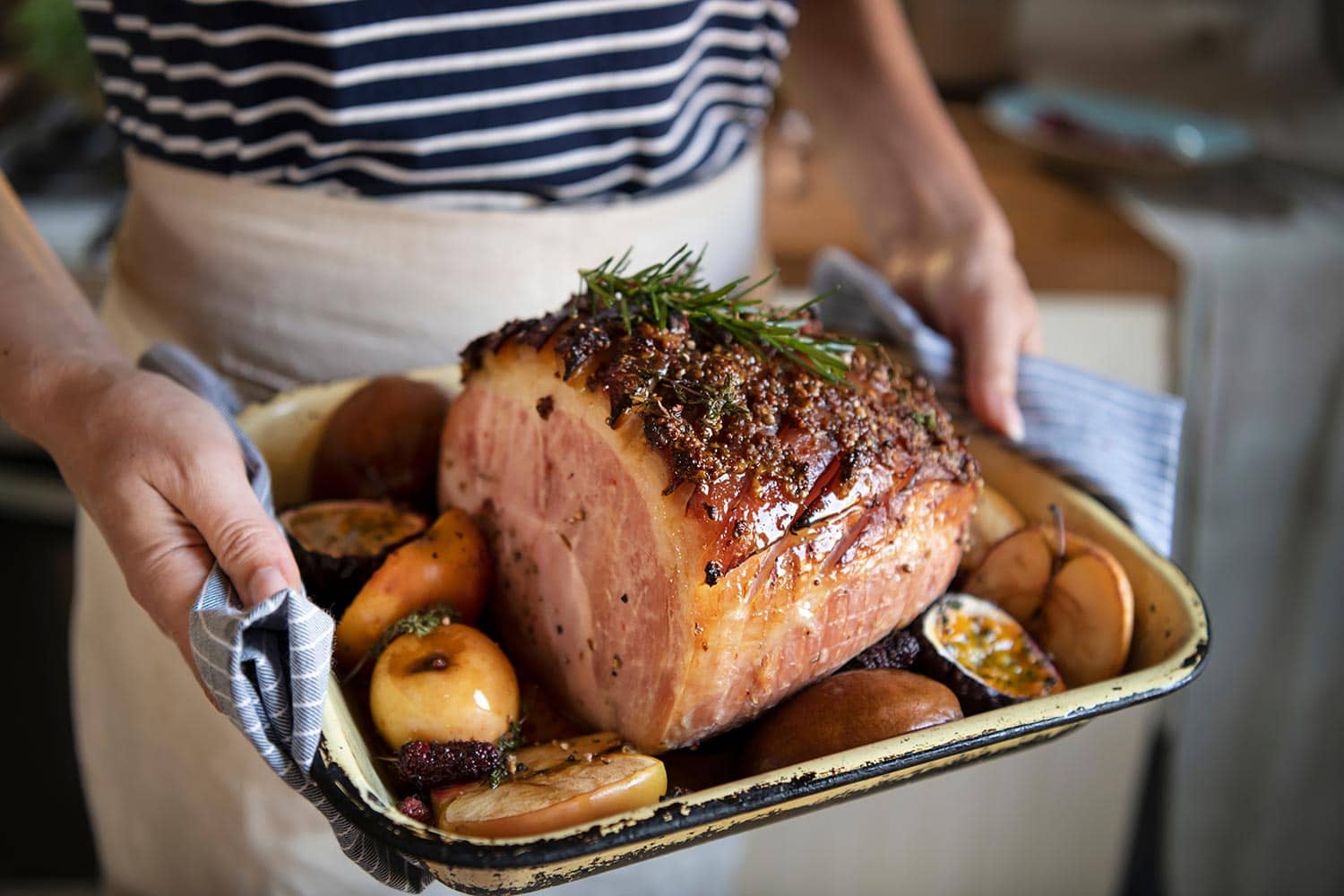 Baking a ham might be simple, but it isn't always foolproof. A lot of people have faced some challenges when baking ham, and here are some common mistakes and ways you can prevent them.

Some people say you should only buy enough ham for your dinner. Fortunately, ham gets better with age, and leftover, properly stored, it lasts for days, so don't hesitate to get more than what you need. You can turn it into sandwiches, quiches, or even add ham to soups or stews.

Ham dries out in the oven. To ensure that it will still be moist, juicy, and tender, give your ham a bath while in the oven. Add some liquid to the bottom of the pan to keep the ham's moisture intact. You should also baste the ham every 15-20 minutes while baking, but don't forget to cover it up after you baste it in its juices.

You might find a packet of glaze that comes with your ham when you buy it. While it's generally okay tasting, there is no better way to liven up your holiday meal than making your own signature glaze. There are a number of glaze recipes you can try, but some classic versions are bourbon glazes or brown sugar glazes for that sweet-savory flavor.

Cook It Low And Slow

To make sure you properly heat the ham, it is important to start baking it at a low temperature (about 300°F) to ensure that the whole thing gets heated from the inside out. Aside from this, you also shouldn't cook your ham straight out of the refrigerator. This will shock your ham, and it will not be heated thoroughly.

After heating the ham at a low temperature, crank it up to a higher temperature (400 to 450°F) when you are about to glaze your ham. This will allow the glaze to stick and burnish itself on your ham's surface.

After the long wait, everyone will surely be excited to dig in that freshly baked ham. However, cutting right after you take it out of the oven will most likely let all the juices you worked hard to keep just run out. Give your ham a little rest by leaving it out on the counter for about 20 minutes to allow everything to be absorbed, making the meat much more delicious.

A whole leg of ham served during dinner or a special occasion will always be a magnificent centerpiece dish. Don't forget to mix and match food that will pair well with this delectably glazed dish. After baking your own ham, everyone will surely be looking forward to the next dinner celebration in your home.

Are you looking to discover more dishes you can serve for that fancy dinner at home? Look no further because we've got great articles for you:

How To Cook Chicken In A Dutch Oven

At What Temperature Should You Bake Meatloaf?

Does Cheese Always Age Well Or Does It Go Bad Eventually? [According To Type Of Cheese]

How Long To Grill Burgers [Charcoal Or Gas Grill]