If you're unfamiliar with how appliances work, your anxiety can go through the roof. There are so many instances where you might not be sure if it's a functioning regularity or oddity. Regarding microwaves, sometimes it can be worrying if it starts getting hot on the outside. Is it normal? If that's what you're trying to find out, let's investigate further!

In some situations, the microwave can get hot because of how you are using it. Foods that require extended periods of heat will produce excess steam that can heat up the outside, too. Though, there's a distinguishable difference between hot and warm. If the exterior is too hot to touch, you might need to look further into what could be causing it. In this situation, it can spark a fire or damage components inside.

Now that you know how normal it is, you may want to find out more. How hot can the exterior get? Do only certain areas heat up? What are the consequences of letting it overheat? If you want to find out this and more, keep reading ahead. 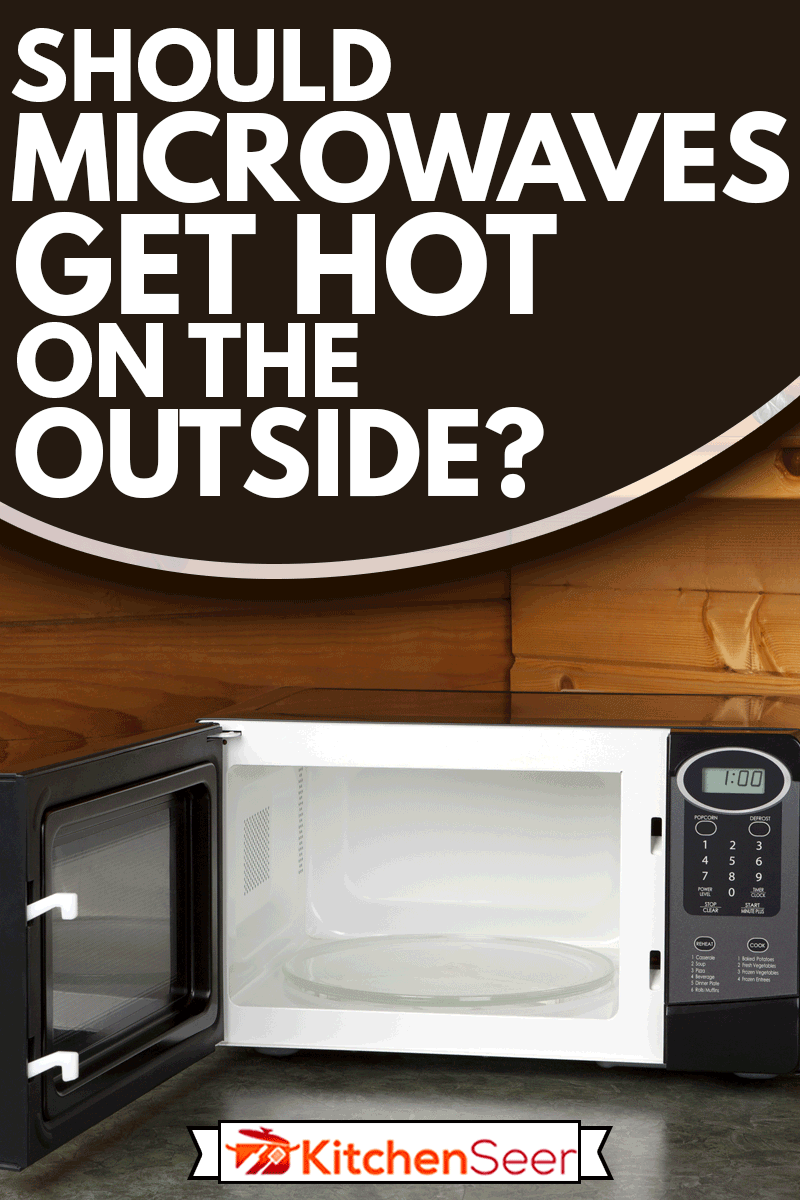 How Hot Does the Outside of a Microwave Get? 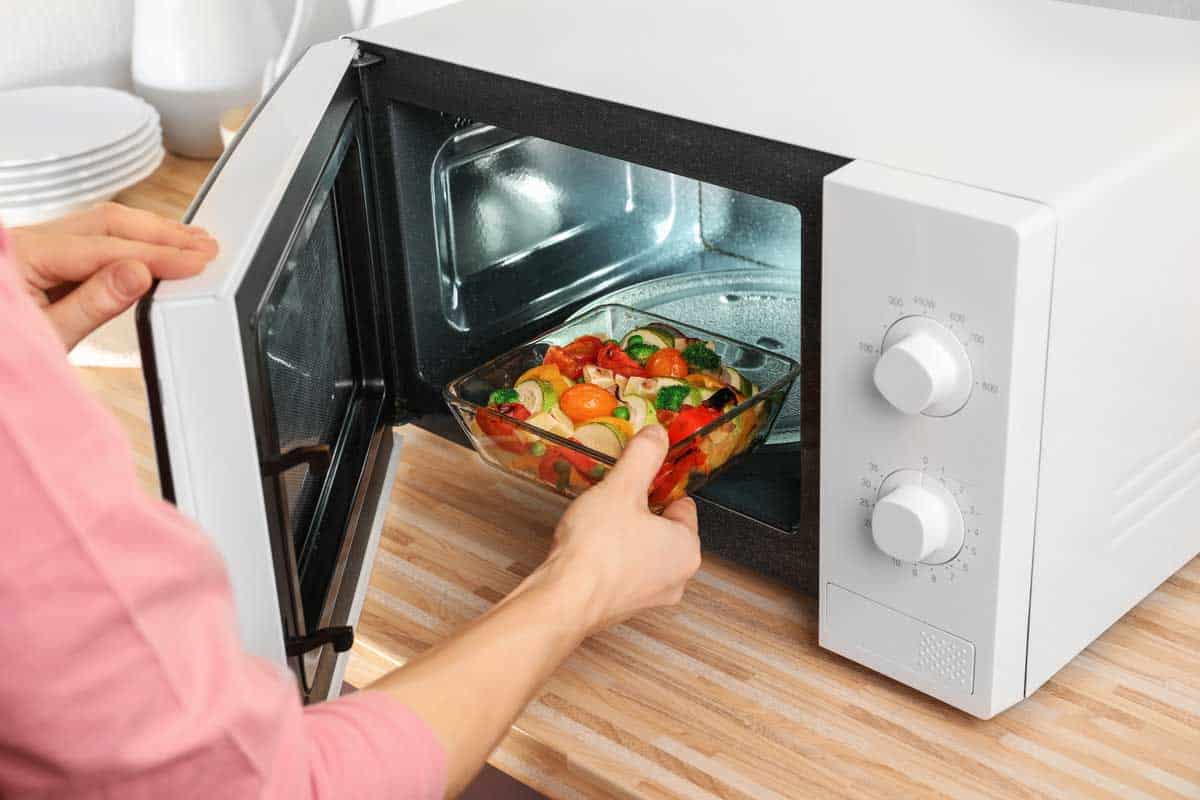 In general, the exterior of the microwave can get hot enough to cause discomfort. Though, if you touch it, you won't immediately flinch in pain.

This state is usually caused by prolonged use of the microwave. In addition, some components like the magnetron and the interior lamp can contribute to the heat on the exterior.

As some manufacturers suggest, this is a standard occurrence. If you have an over-the-range microwave, the exterior can become hot to the touch because of your cooktop lights.

Do the Tops of Microwaves Get Hot?

Now you might be wondering if this extends to the top of microwaves. Others suggest that is indeed normal. As mentioned above, microwaves can produce excess steam that needs to go somewhere. Continuously running components can add to the temperature appliance temperature.

Why It Gets Hot 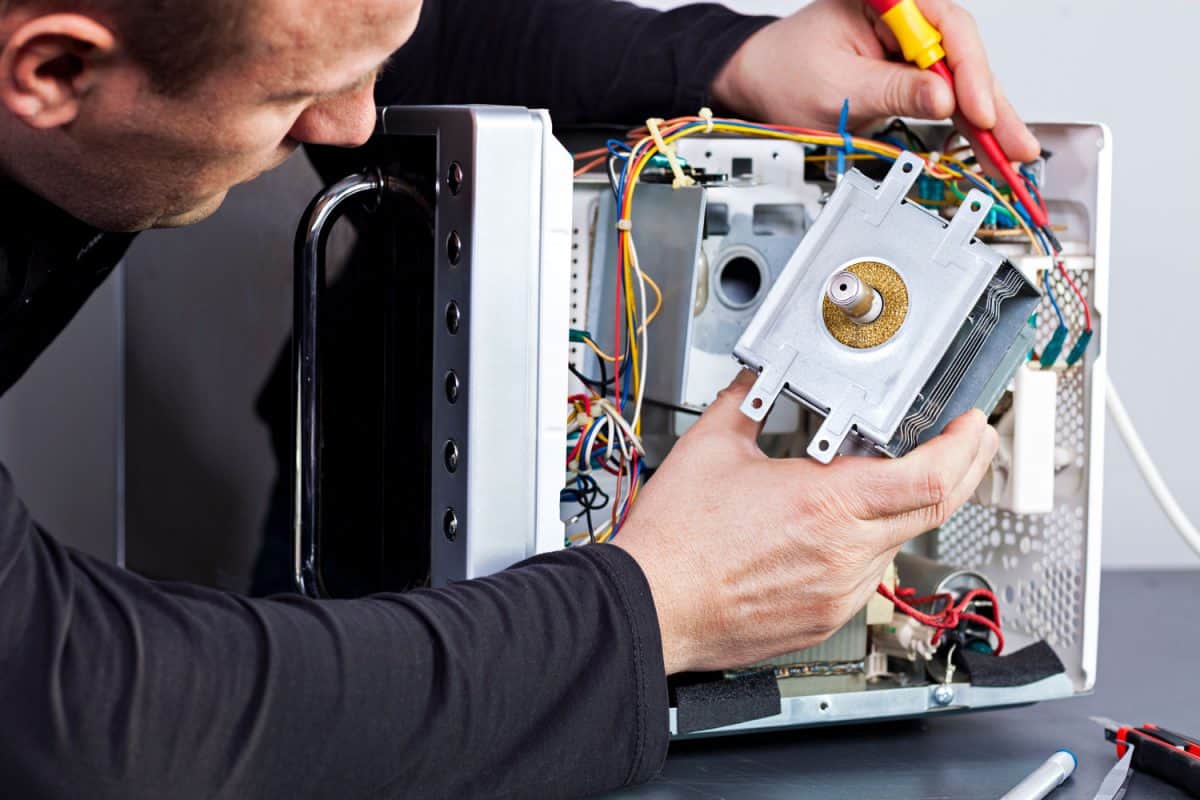 A quick explanation might be suitable enough for some. So, if you want to take a deeper dive into how microwaves work, let's take a look!

According to the FDA, the microwaves the heat your are produced by a component known as a magnetron. The microwaves aren't guided directly towards your food.

Instead, they reflect off of the metal interior. This way, some of the waves make their way to your food. During this process, the magnetron continuously produces heat in the form of microwaves.

It works by finding a source of moisture, usually inside your food. The waves excite the moisture inside, which causes the food to cook.

As you might have caught on by now, there must be a way to prevent the magnetron from overheating. And, there is!

If you stand near a microwave, you might have noticed a warm draft coming from it. It isn't an oddity. In fact, it's a standard occurrence. That draft that you feel is the microwave working correctly.

Reducing the Heat Inside

That draft that you feel is the excess steam coming out of the microwave. As some users suggest, it works by going through a circulation process. The air that comes in first blows on the magnetron to cool it down. As the air passes it, it goes in and around the casing before leaving the microwave.

Now you might ask, why does it need to circulate inside? As mentioned, microwaves cook food by exciting the water molecules in them. While cooking, steam is released.

Since a microwave does not cook with a flame or a heater, there's no way to keep the moisture as vapor. Consequently, if there's no airflow, the interior could become covered in water.

Hence, airflow is necessary to prevent this from occurring. As a recap, air enters from the rear and blows through the magnetron first. Then, it circulates in the casing, pushing steam away in the process. Finally, it exhausts outside, where you might feel a warm draft.

As you might know now, microwaves need enough space to function correctly. It requires adequate ventilation to disperse the exiting hot air. For this reason, you should never place it in spots that are narrow or confined.

As some suggest, you shouldn't set microwaves in cabinets because it will not give the vents enough space to exhaust the air efficiently.

All in all, the whole process you've read above is what causes the exterior to get hot. It comes from sources like the magnetron, steam, and air circulation. For this reason, the back, the top, and the sides of the microwave can get hot.

Now, this might have you wondering, can microwaves overheat? What happens if they do?

Can a Microwave Get Too Hot and Shut Off? 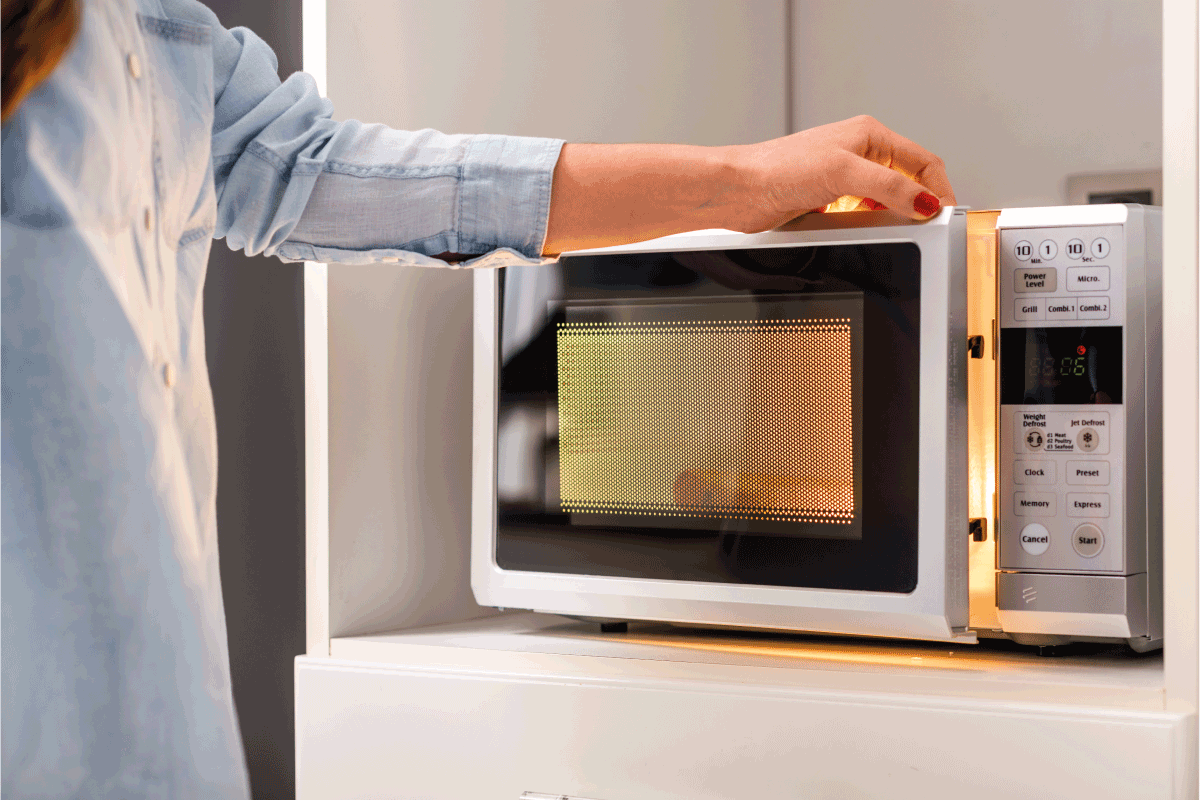 So, if we have a microwave with improper spacing for air circulation, it can indeed get too hot. Unless your microwave has safety features, it is possible that it can overheat but not shut off. Those with safety features do shut off when the magnetron reaches a specified temperature.

What Happens if a Microwave Overheats?

As mentioned above, some microwaves have safety features included that would shut off the microwave if a magnetron reaches a specified temperature.

However, there's still more going on. Since the cooking operation stops suddenly, there's still heat and moisture contained inside. The fans will not ventilate it out because it is off.

Consequently, in some circumstances, your food might overheat too! But, what causes a microwave to overheat? Additionally, how can you prevent it from doing so?

Operating with Nothing Inside

The first step is to know what you shouldn't do with a microwave. In this respect, you should never turn it on with nothing inside. Likewise, don't insert any item that contains no water molecules. As mentioned above, microwaves heat food by exciting the moisture inside.

When there's no moisture to absorb the waves, it has to go somewhere. So, the producer of the waves, the magnetron, will absorb it. This situation can result in damage to it.

The damage will occur to the magnets in the magnetron. As it overheats, it will begin to form cracks. The signs of magnetron failure are:

Stop using the microwave immediately if these signs are familiar to you. You can either replace the unit or swap out the magnetron for a new one.

The other cause of overheating is a faulty fan. You should be familiar with the noise a microwave makes when it is running. That all too familiar hum is the fan working to ventilate the hot air inside.

If it's not working correctly, or at all, your microwave will run for a few moments before it shuts itself off.

How Long Does It Take for a Microwave To Cool Down After Overheating? 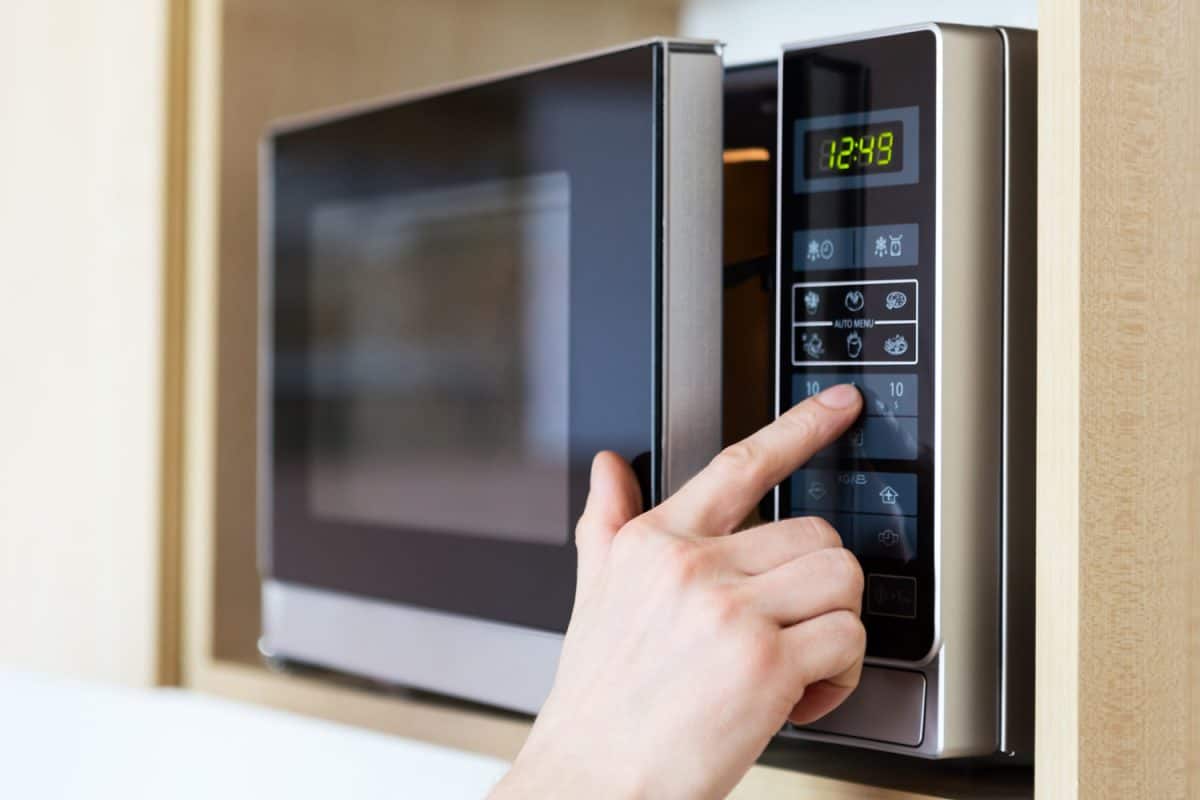 If your microwave manages to overheat, there are a few things you can do. The first is to check for any signs of damage like the ones mentioned above. Should the microwave show none of the symptoms, your microwave should be able to function correctly.

It might have shut down from running too long. If this is the case, you'll want to wait until you can use it again. As some users suggest, first start by unplugging the microwave. Then, leave the door open for 15 to 20 minutes.

Once 15 to 20 minutes are up, plug the cord back in. It should function well if there's no damage.

Often, technology can be mysterious and frightening when you don't know how it functions! For this reason, it's reasonable to look for information to prevent any accidents. We hope you found the information above insightful!

Before you go, do you have other microwaves concerns? Are you wondering how often you should replace it? You can find out more by checking out our post here.

Are you curious as to what you can put inside a microwave? Are you itching to let a spoon inside? It can have some consequences. For more information, check out our post here. Until next time!

How Tall Is A Kitchen Island? [Dimensions Explored]

9 Types Of Oil That Don’t Solidify In The Fridge