If you're new to cheeses or curious about the smell of them in general, there are times where we can question their freshness. Are they supposed to smell like that? With the wide variety of odors they can produce, sometimes it's hard to tell when it's still safe to consume. More specifically, it's tough to know if it should smell the way it does. If that's what you're curious about, let's take a look!

Feta cheese often carries a mild acidic smell. Many compare the odor with things like smelly socks, baby vomit, and feet. In this situation, feta cheese could be safe to consume. However, there are still more indicators to check to tell if it's no longer usable. You'll have to keep a close eye on mold, texture, and more.

The smell isn't the only cause for concern. While it might smell terrible to consume, it could still be edible. Some tell-tale signs are more convincing of when feta has gone bad. If you'd like to find out what they are, keep reading ahead.

Why Does Feta Cheese Stink?

First, let's tackle the first problem. Why does feta smell stink, even if you bought it fresh out of a dairy shop? If any other food item smelled similarly, we'd probably throw it out right away. But, why do cheeses get the benefit of the doubt?

You might have gone through your fair share of cheeses. In that timeframe, you might have also noticed that some cheeses don't emit a smell while others do! Often, they smell similar to what it makes you want to do, vomit.

The odor is a result of different factors. The type of milk, the aging process, and curing all contribute to the smell. Regarding feta cheese, it depends on where you purchase it. 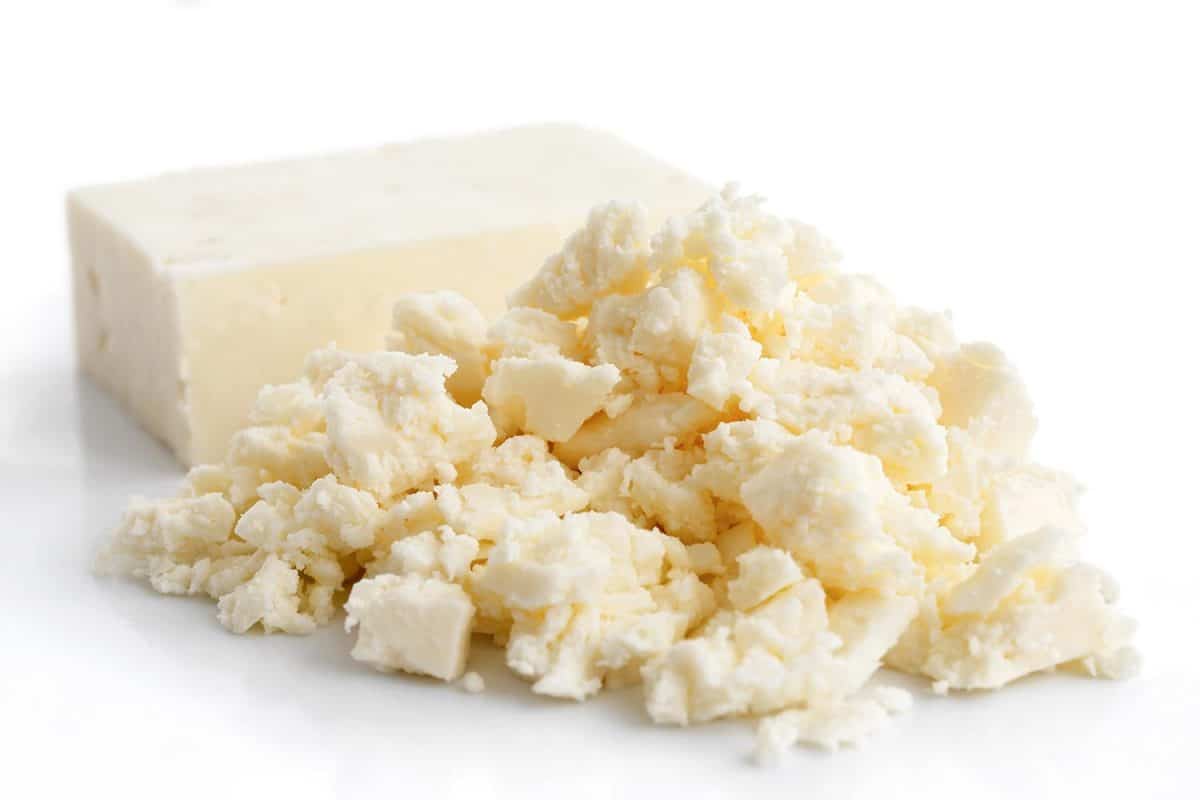 Traditionally, it's made out of 100% sheep's milk. But that's not always the case. Some feta cheese producers may also mix goat's milk with it. In the United States, cow's milk also enters the mix.

So, you'll have to check the labels or with your diary shop to tell what percentage of milk your cheese uses. Nevertheless, the type of milk is why you might not be familiar with the smell.

Feta cheese also goes through a curing and aging process. Regarding the curing, feta is submerged into a mixture of salt and water. This method intensifies the taste and keeps it soft and fresh. Additionally, it is kept in this mixture for at least two months. Some producers might let it age for 12 months.

Combine all three of those factors, and you can understand why feta cheese can have a putrid smell. But, the key reason feta can smell repugnant is because of bacteria. As some suggest, bacteria break down the proteins in feta.

As a result, some chemical compounds are released in the form of a gas. Our smell receptors detect the gas, resulting in us acknowledging the terrible odor.

But, what makes it smell so weird specifically? Some cheese enthusiasts claim that it is brevibacterium linens to blame. The name might not be familiar to you but, the odor of its cousin might be. Brevibacterium epidermidis is a cousin to brevibacterium linens. It's present in areas like the armpit, feet, and sweaty skin.

Lastly, feta cheese also contains some form of yeast that contributes to its smell. The reason is that yeast feasts on the protein and fat contents in the cheese. As a result, they release smelly compounds that give you that feet or vomit aroma.

As you can see, many different elements play a role in the smell of feta cheese. But, it begs the question, does it mean it's gone bad? Additionally, how can you tell the difference between expired feta and fresh feta? It's confusing because one of our senses of smell is nearly taken out of the equation.

Even some answers online can confuse us. As one Reddit user experienced, their feta cheese didn't have the most pleasant of smells. But, after a taste test, they concluded that it was edible and delicious! So, we'll have to look at other ways to spot if the feta is no longer useable.

How Do You Know if Feta Has Gone Bad?

There are several signs that you can no longer use feta cheese in your dishes or as a snack. The first sign would have to be the texture. Feta cheese tends to dry out quickly. For this reason, it is usually packaged with brine to maintain its soft quality.

But, if your feta cheese is starting to become dry, stiff, and gritty, it might be time to throw it out. If you have a block of feta, you can chop off the hard bits and consume the soft areas. 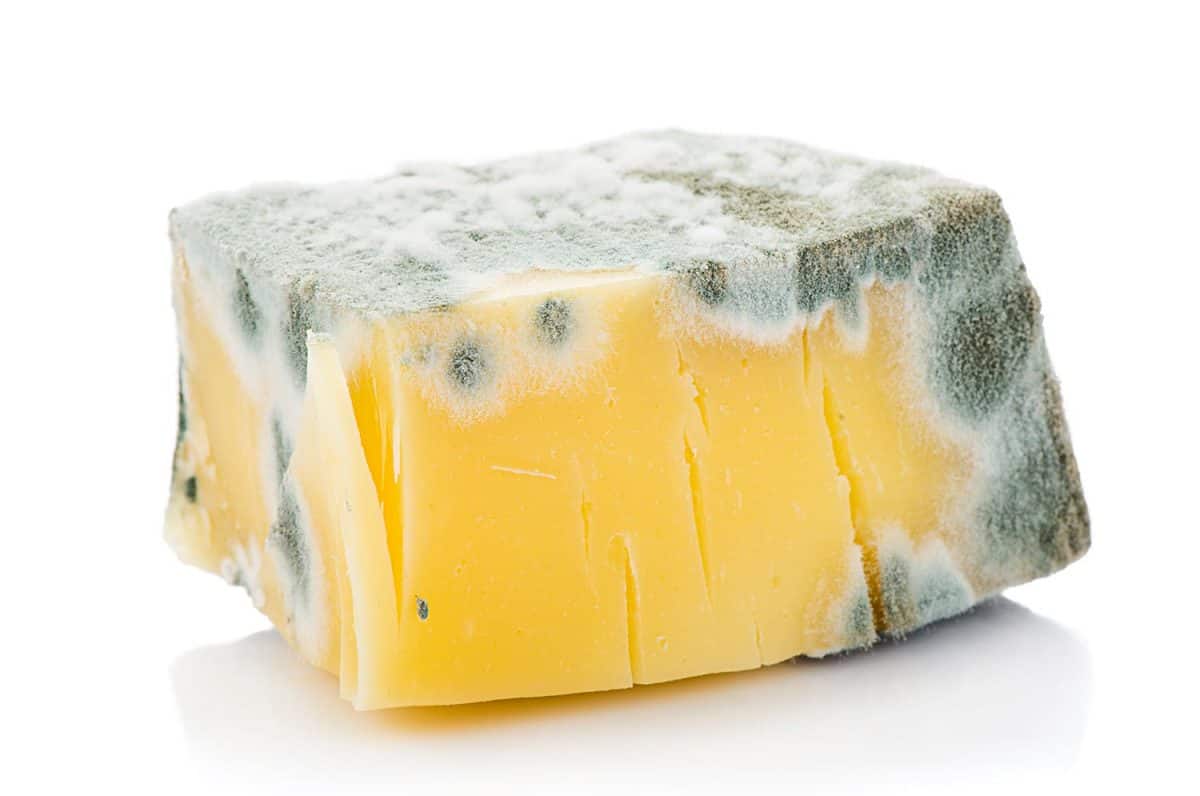 This sign is one of the most obvious ones. Mold would be a clear indication that your feta cheese is no longer consumable. Now, if you're new to cheeses, you might have heard a tip where you can cut off the mold and continue to consume the good areas. While that's a way to get the most out of hard cheeses, it isn't a viable strategy for soft ones.

Mold can penetrate and easily spread over the whole cheese. It isn't the same with hard cheeses. So, it's best to leave these tricks for the hard and semisoft cheeses. 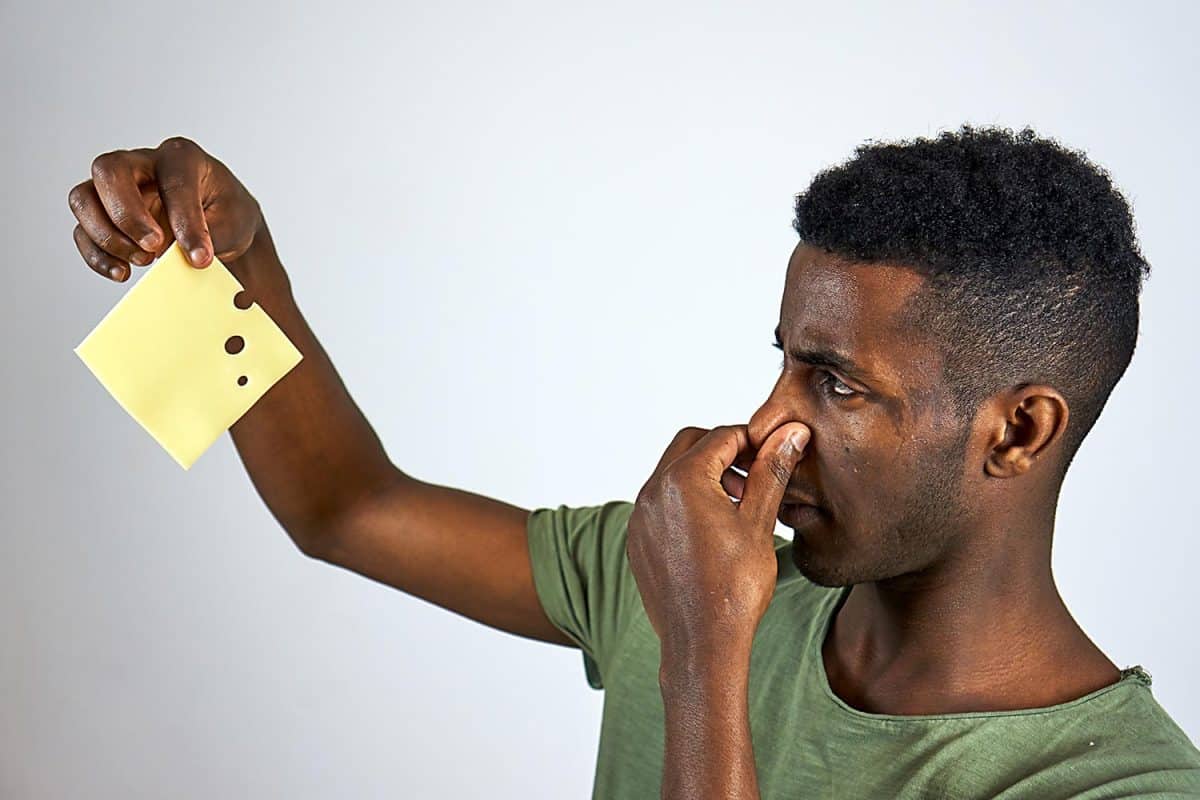 Using smell is the trickiest option of them all. The odor will invoke a different reaction depending on the person. Even fresh feta cheese might smell a bit revolting to some. But, to people familiar with cheeses, it can be a bit more distinguishable.

So, your mileage might vary in this situation. Give a whiff to start. Is it stinky but not enough to make you dry heave? It might just be the foul smell of the cheese.

On the other hand, is the aroma too unpleasant? Does it make you feel like you wouldn't touch with a 10-foot pole? If it starts to smell too sour or repulsive, it's a strong indication that you should not continue using it.

Can You Get Sick From Eating Bad Feta Cheese?

You might have noticed that we did not include using taste as a test to check the freshness of feta cheese. The reason is simple. Eating feta that has gone past its expiration date can have some serious consequences. If enough is consumed, you put yourself at risk of listeria food poisoning.

The type of food poisoning is expected when you've eaten foods that are contaminated by listeria monocytogenes bacteria. Soft cheeses like feta cheese are 160 times more likely to cause a listeria infection. It's a bacteria that preferably targets the nervous system. Consequently, it leads to health problems like meningitis and septicemia.

Although it's a rare type of infection, you should be able to catch the symptoms. They are:

Will Feta Cheese Go Bad if Not Refrigerated? 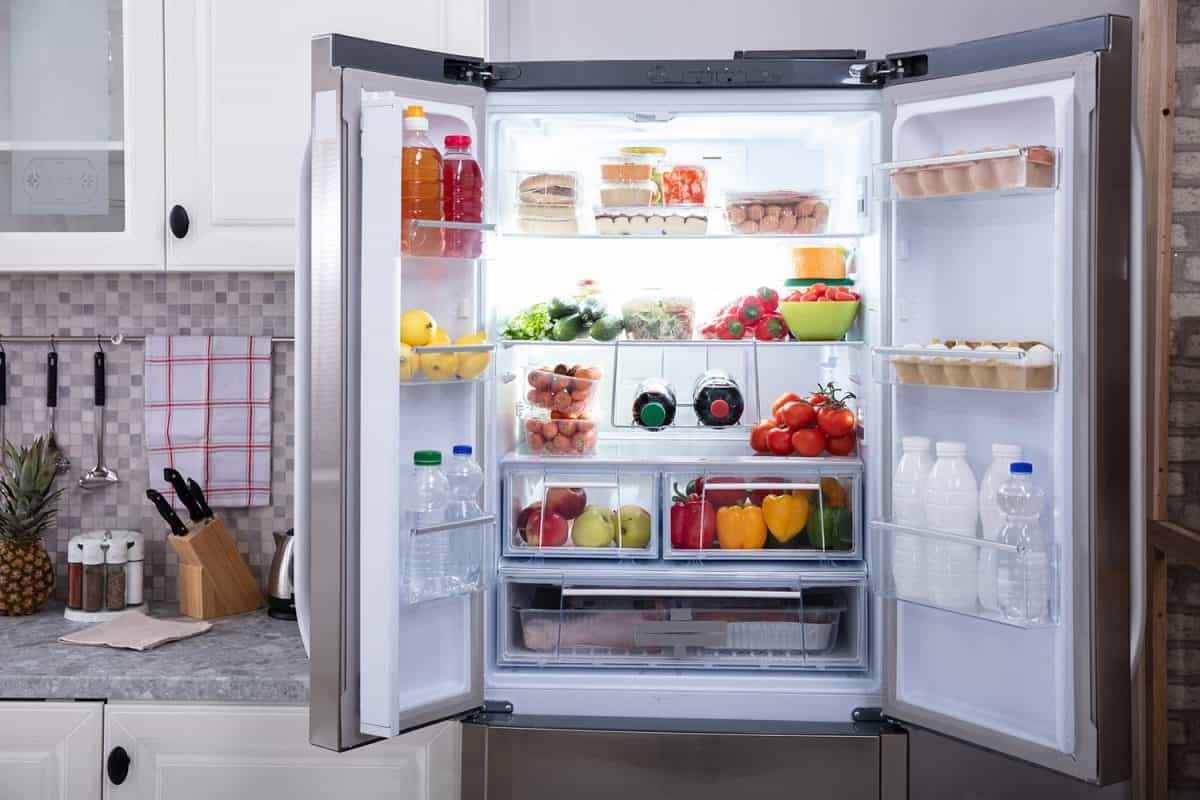 There might be a situation where you leave your feta cheese unrefrigerated. Now comes the question, how well will it fare outside? If you're wondering if it will go bad, the answer varies. If left out by itself, it can last a long while. But, it will dry out after a certain period, making it less edible.

So, how long does it last? Let's take a quick overview.

How Long Can Feta Cheese Sit Out?

As mentioned a few sections above, feta is typically in a container with its brine. The brine helps preserve it for longer. As some suggest, feta cheese can sit out at room temperature for 24 hours if it's in a sealed container with its brine. In addition, if you haven't opened the packaging yet, feta can last a few days longer. Again, some users suggest that feta is shipped unrefrigerated for 24 to 48 hours.

Regardless, you'll want to avoid setting it in areas that are humid or with too much sun exposure. Otherwise, sealed feta cheese can last a while. So, if you've forgotten to refrigerate it right after your grocery shopping, there might still be time to salvage it.

How Do You Store Feta Cheese After Opening? 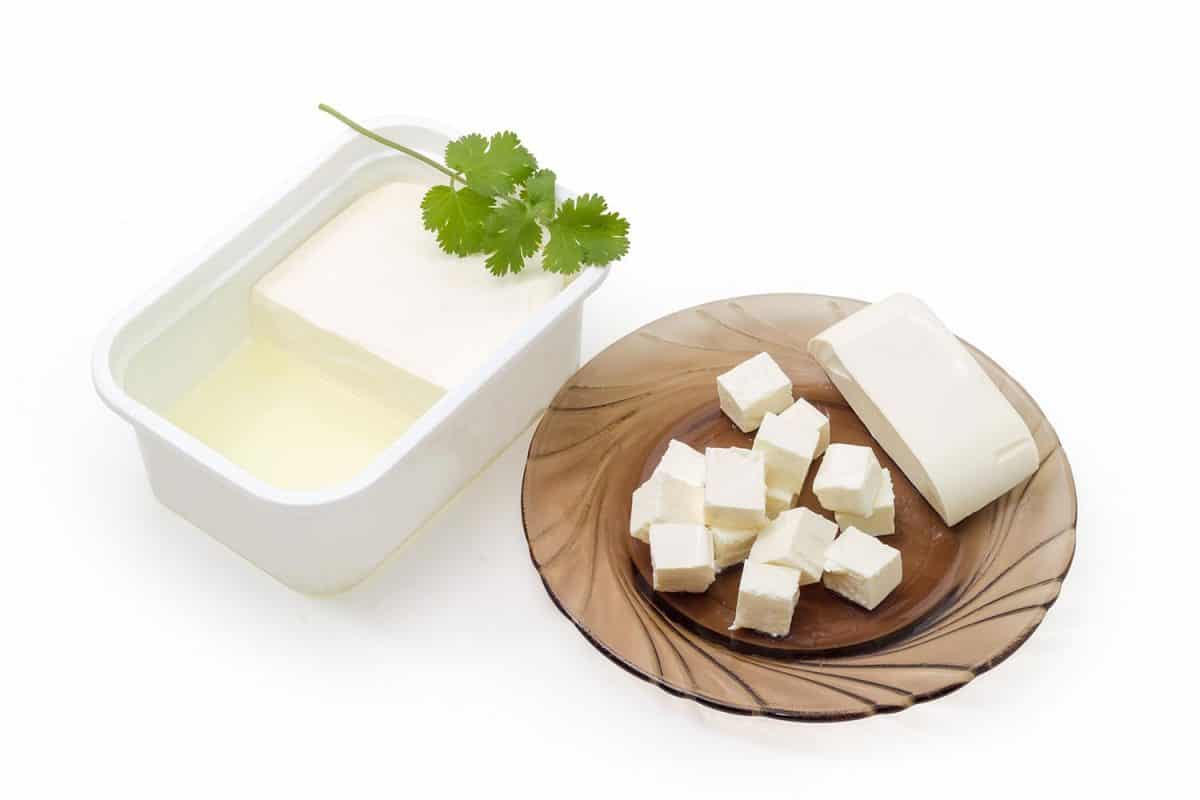 There comes a time where we don't use all of our feta cheese in one sitting. Now you need to store a large chunk of it to save it for later use. But, how do we go about doing that correctly? In this situation, the brine comes to the rescue. Like we've covered above, the brine is a water and salt mix that helps preserve the cheese.

So, if you have leftovers, you can pop them into a container with the original packaging brine. However, in most cases, you probably did not save the brine for later. In which case, you'll need to make a brine of your own. As some recommend, mix two cups of water with two teaspoons of kosher salt to make the brine.

Make sure the brine covers the feta entirely. If the cheese is already too salty, you can also leave it in plain water to keep it moist. In any case, using this method, the cheese can last you 4 to 6 weeks. The more likely scenario is that it will last you up to a week.

Many consider feta to be one of the healthier options regarding cheeses. It boasts many health benefits. But, without knowing the downsides it can have, you might not be able to experience them. So, you must familiarize yourself with how long it can last and how to preserve it well. We hope you found the information above insightful.

Before you go, do you have other cheese concerns? Are you also having an experience with brie cheese for the first time? If you're wondering about peeling the rind, you can find out if you should by checking out our post here.

Is your knife getting dull? Are you wondering if cutting cheese has something to do with that? You can find out more by checking out our post here. Until next time!

Is A Cheese Board A Starter Or Dessert?

How Long Should You Cook Grilled Cheese?