Nothing is more comforting than a homemade loaf of fresh-baked bread. Searching your kitchen for all of the ingredients and finding all but one can be disheartening. Yeast may seem like one of the most important ingredients for your recipe, but there are several substitutions. We have searched many sources to bring you an inclusive list of ways to make bread without yeast.

Substituting other ingredients for yeast is only one of the ways to make bread without yeast. Some recipes don't use yeast at all. But, if the particular bread that you want to bake requires yeast, there are a few ways to work around that obstacle. The yeast substitutes that we will discuss in further detail are as follows:

Finding a substitute for yeast can be one of many issues that you may encounter while baking bread. You may wonder what the purpose of yeast is and if you can achieve the same outcomes using other alternatives. You may ask yourself what loaves of bread are like without yeast and if there is any bread that you can make that don't use it. We will answer all of these questions and discuss other closely related topics, just keep reading! 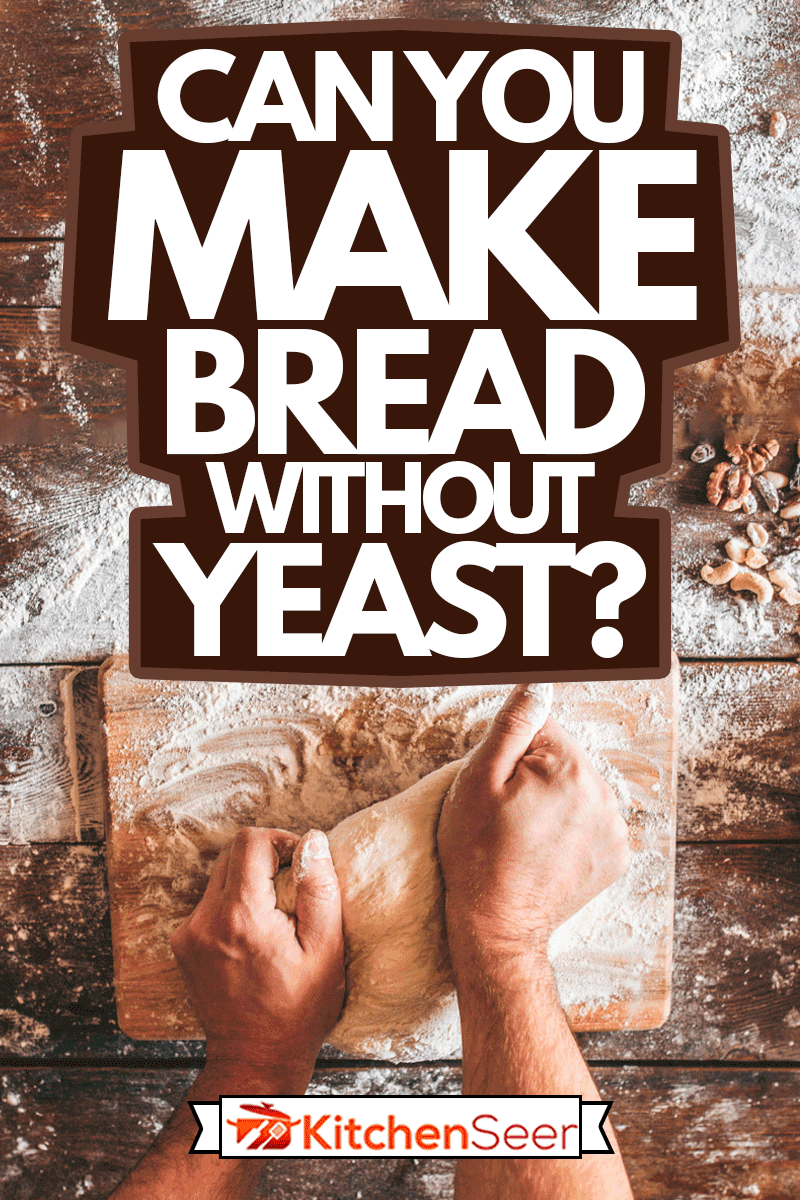 You can purchase self-rising flour already made, or you can easily make it yourself. It is simply a mixture of flour, baking powder, and salt. It is an excellent substitute for yeast, as yeast is the substance that typically makes bread rise.

You will get a perfectly consistent rise from your bread using self-rising flour because it comes already mixed. Some recipes call exclusively for self-rising flour, but it should not be used in recipes that already call for a different leveling agent.

Yeasted bread rises due to carbon dioxide production when yeast combines with flour and water. When carbon dioxide forms, bubbles are released into the dough.

These bubbles become trapped in the dough and expand when heated, resulting in a soft spongy bread texture. This carbon dioxide production can be mimicked by mixing baking soda or sodium bicarbonate, a base, with different acids. 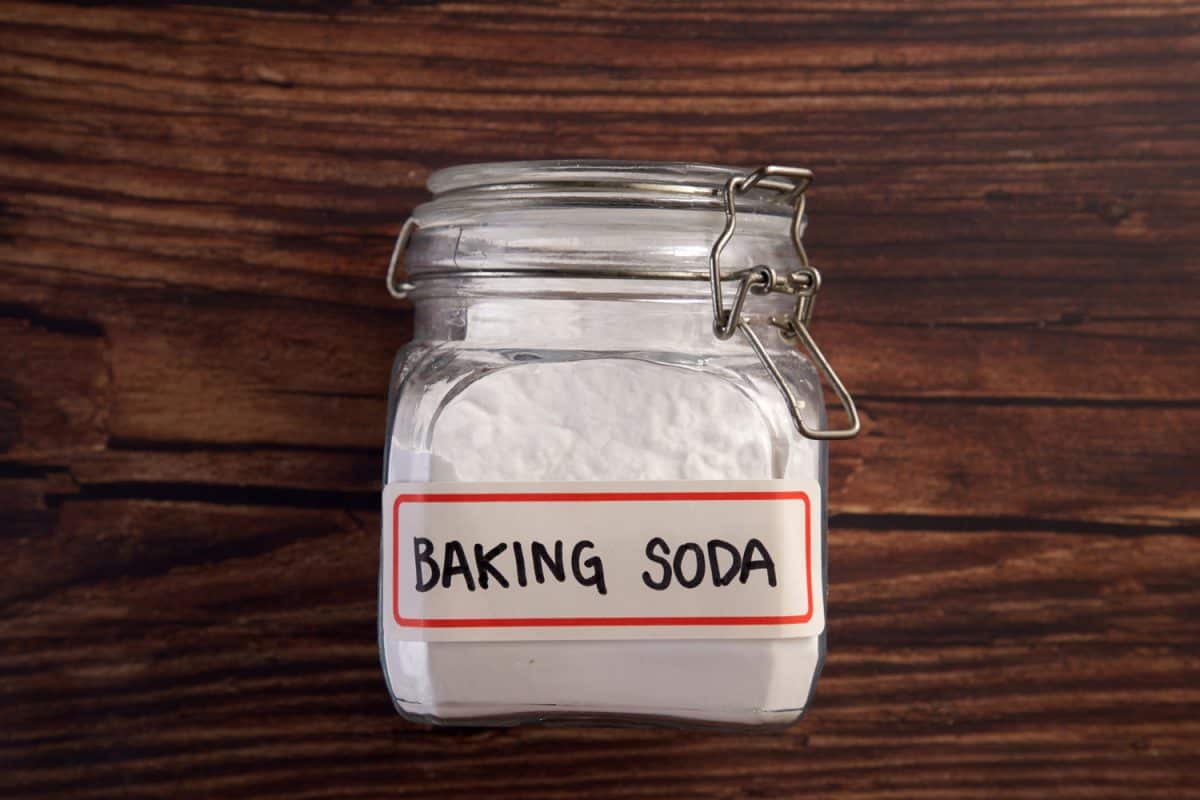 One possible acid-base combination for baking bread is equal parts lemon juice and baking soda. While your bread may not rise quite as high with this combination, it will get the job done.

Buttermilk is made through a process of fermentation of lactose, the main sugar in milk, producing lactic acid. This acid makes the perfect companion to baking soda for bread.

White Irish soda bread is an example of a bread that uses the baking soda and buttermilk combination. This simple bread uses only four ingredients: flour, buttermilk, baking soda, and a bit of salt.

Baking soda and milk mixed with vinegar in a 1:1 ratio

Buttermilk can be substituted with milk and vinegar or milk and lemon juice mixed in a 1:1 ratio. Combining this buttermilk substitute with baking soda can give you similar results to baking soda and buttermilk.

One Tbsp of vinegar or lemon juice is combined with enough milk to equal a cup for each cup of buttermilk needed. Yogurt or sour cream can also be used in place of buttermilk.

Baking soda and cream of tartar

Cream of tartar is another acid that can be combined with baking soda to produce carbon dioxide. The combination of baking soda or sodium bicarbonate and cream of tartar or tartaric acid results in what is commonly known as baking powder.

When cream of tartar is combined with water and then exposed to baking soda, the chemical reaction is much like adding vinegar to baking soda. The mixture results in carbon dioxide air bubbles.

According to experts in the field, baking powder works well as a substitute for yeast when making loaves of bread, cakes, muffins, or pancakes made with batter. Baking powder is baking soda already mixed with an acid, usually cream of tartar. 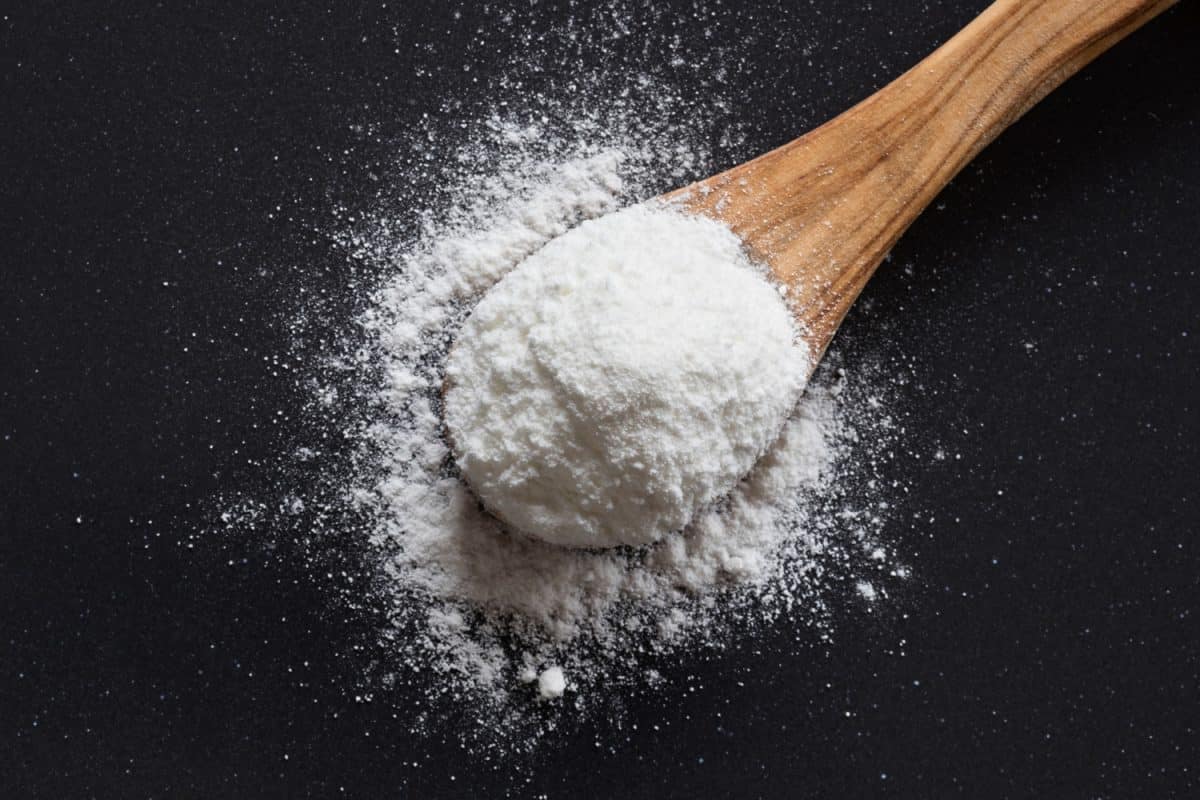 Baking soda requires the addition of an acid to produce carbon dioxide that makes your bread rise. Baking powder is baking soda already mixed with acid, so it should not be used in recipes that call for another acid. 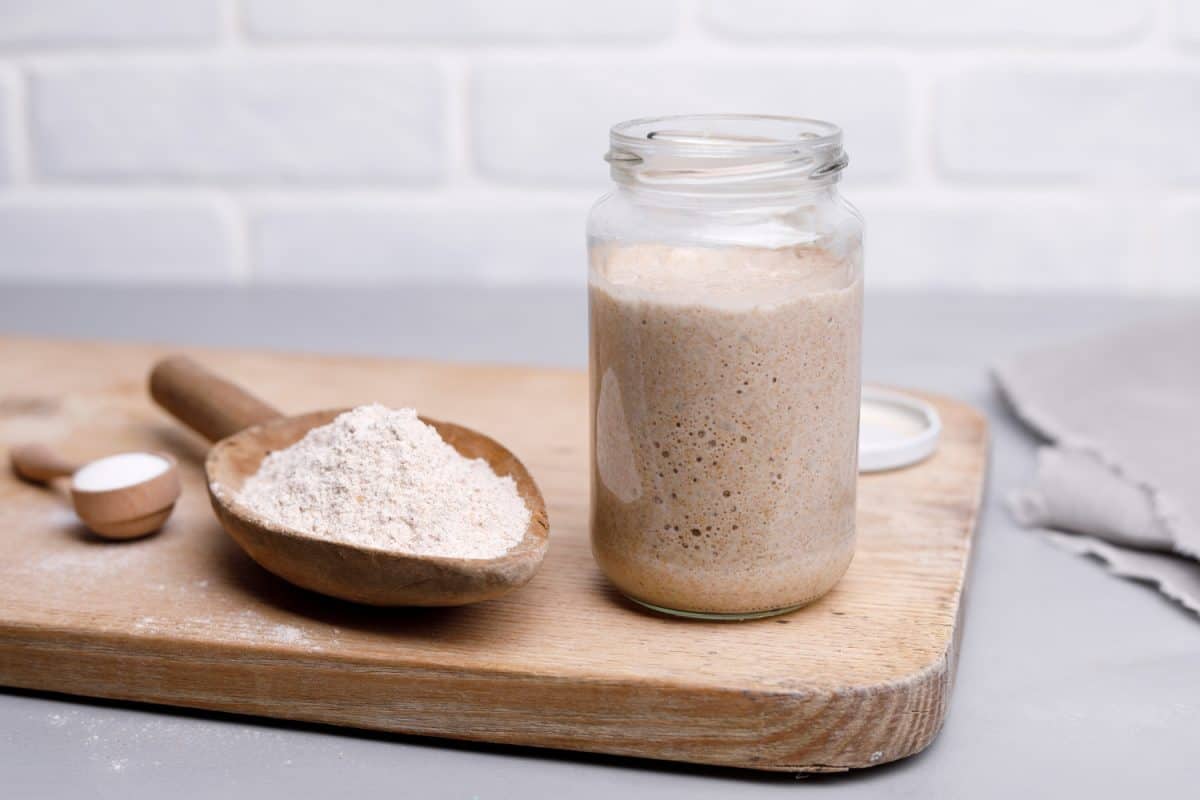 One cup of sourdough starter should be used in place of one envelope of active dry yeast. The sourdough starter contains flour and water, so you should decrease the amount of water and flour used in your recipe to account for the starter ingredients.

Reduce the amount of water that you use in your recipe by a half cup. Flour should be reduced by 3/4 cup to account for the flour in the starter.

The process of autolysis can also cause bread to rise without the use of yeast or other leavening agents. Autolysis refers to a process of cellular destruction or breakdown by the cell's enzymes.

This process occurs over a long period, sometimes up to about 20 hours. Make sure to follow your recipe for autolysis closely as left for too long, autolysis can damage your dough.

What is the Purpose of Yeast in Baking Bread?

Yeast is an edible fungus that comes dried or fresh. It is the ingredient in bread that makes it expand and rise. Instant yeast is ready to use but activated dry yeast requires a little preparation. Yeast is also an important part of the fermentation process of beer and winemaking.

Can you Make Bread Rise Without Yeast?

What Happens to Dough Without Yeast?

As we have discussed, bread can rise without yeast, but it will not rise as high. As a result, it will have a different heavier texture than bread that is made with yeast. Sweetbreads like banana bread don't use yeast and have a texture similar to that of muffins. Yeast also lets off alcohol that gives the bread a distinct flavor that you won't get with yeast substitutes.

Does all Bread have Yeast? 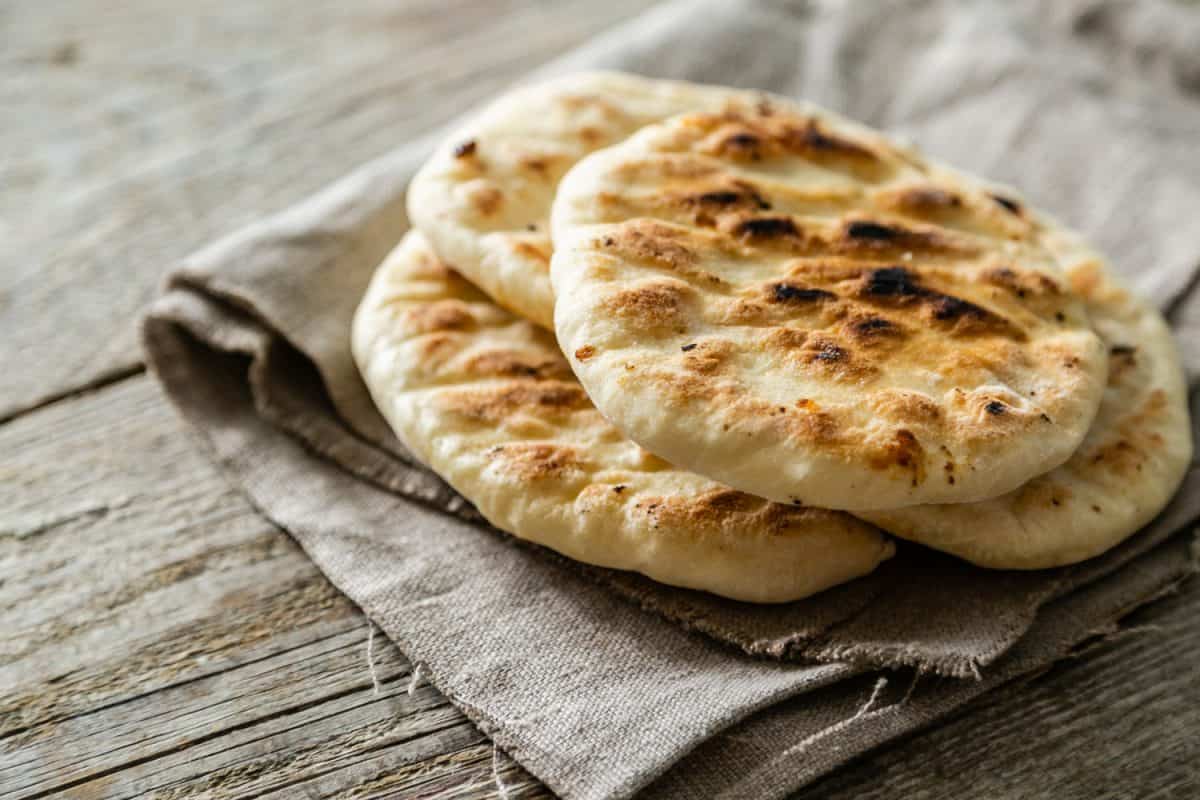 No, not all bread has yeast. Flatbreads, including pita bread, are made without the use of yeast.

We have discussed many substitutes for yeast, but some bread doesn't even call for yeasts to rise. Some bread calls exclusively for other leavening agents.

What type of Bread is made Without Yeast?

Focaccia bread is made without the use of yeast. Bob's Red Mill boasts a recipe made without yeast or gluten.

Quick bread is also made without the use of yeast. Because of this, it is quick and easy to make. Watch the video below for instructions for making this delicious yeast-free bread.

Is Bread Without Yeast Healthier?

Because yeast is broken down into sugar, eating bread without yeast is healthier. If your body produces excess Candida, you should also avoid excess yeast in your diet.

Bread made without yeast help you to avoid excess yeast and helps to control the production of Candida. A yeast infection in your body can cause skin breakouts, thrush, clouded thinking, and fatigue. 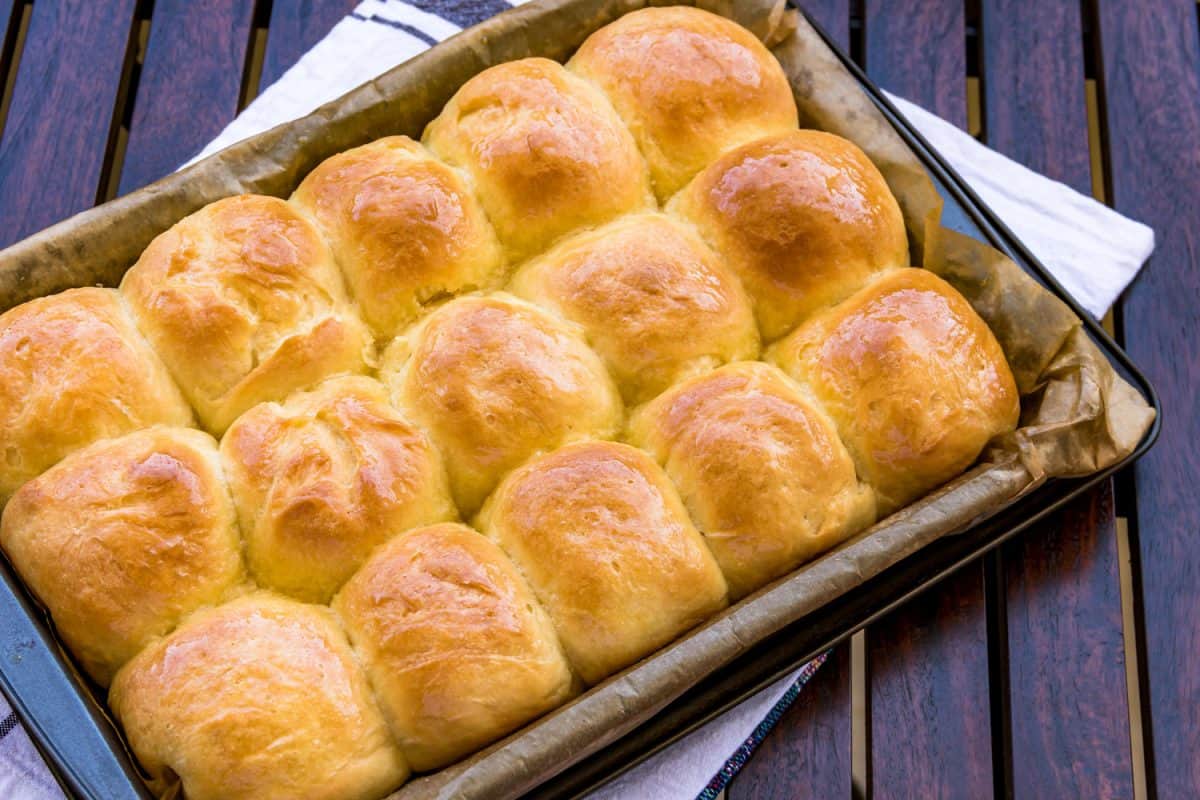 Bread baking is an art that has been perfected with many different recipes over the years. But, some of the ingredients you need to make bread aren't commonly kept in your kitchen. A missing ingredient isn't always a deal-breaker, even if it seems like an important ingredient. We hope that the inclusive selection of yeast alternatives has given you some ideas and will help you decide on yeast substitutions during your next bread baking project.

Before you go, here are some other articles that may be of help to you:

Can You Bake Bread In A Glass Loaf Pan? Does It Take Longer?

How To Slice Bread Without A Bread Knife

How Much Ricotta For A Lasagna?

How Long Does Milk Take To Boil?

How To Caramelize Onions In The Oven