You don’t have to be a professional chef to have a very busy kitchen. You’re going to end up in the kitchen every day, and traffic between family or roommates can get chaotic. Using a kitchen island or a kitchen peninsula will dramatically change the look and flow of your kitchen. We have thoroughly researched the advantages and differences of kitchen islands and kitchen peninsulas.

The kitchen island is a freestanding counter in the middle of the room while a kitchen peninsula typically forms U-shaped counters. In other words, these kitchen layouts were named quite literally, matching the definitions associated with water. Using either the kitchen island or the kitchen peninsula will result in different advantages. So, it’s important to choose the right kitchen layout for your individual circumstances. 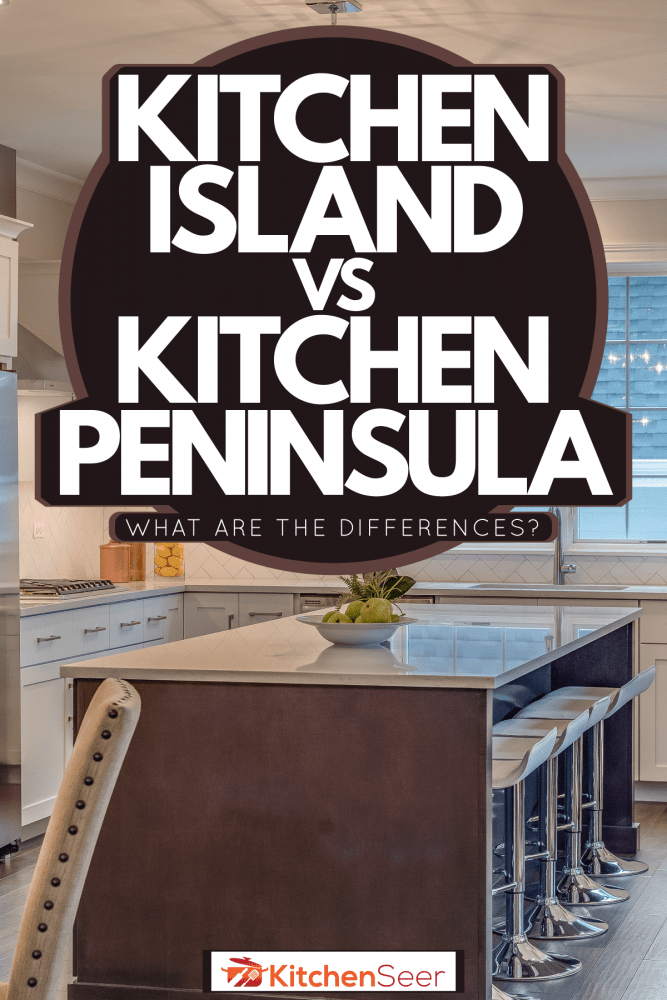 Should I choose a kitchen island or a peninsula?

Kitchen islands and peninsulas are both designed to add extra space for storage, work, and leisure. But there are a number of advantages and disadvantages for either selection. It is always best to consider function first and then style. So, you should understand how each option will balance your kitchen and lifestyle. 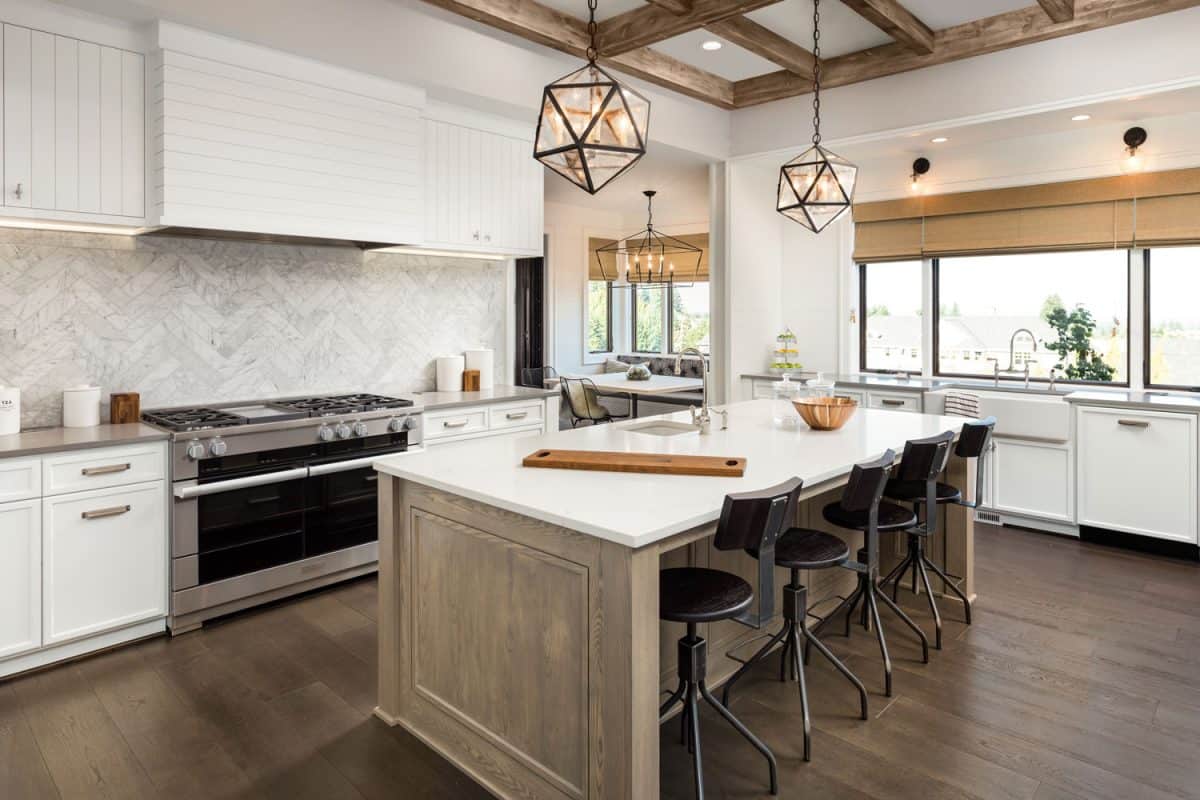 That becomes particularly useful if you plan on cooking a lot. You can use the extra workspace for necessary equipment or tools, but you’ll have quick access to them. And you will still be able to freely maneuver around the kitchen.

Or, you can prioritize your guests. The extra room on the island is perfect to bring company into the kitchen, and seat them without losing the elbow room to cook.

What is a good kitchen island size?

Unfortunately, the biggest drawback to a kitchen island is how much space it requires. Kitchen islands are highly unlikely to fit in ordinary kitchens. Many apartments or townhouses only have a galley kitchen. This is a narrow kitchen that closely resembles a hallway. Either way, you need to take careful measurements of your kitchen before you get your heart set on a kitchen island.

As a general rule, a kitchen island is supposed to be at least four feet long. They should also be around two or three feet deep. It is ideal if your kitchen can provide three or four feet of clearance surrounding the island, too.

Without this amount of space, your kitchen island can simply become a giant obstacle in the middle of the room. For an easier point of reference, most kitchens need to be at least thirteen feet wide to accommodate a kitchen island. If you still feel certain that a kitchen island is right for you, then you can read this post about twelve different types of kitchen islands. 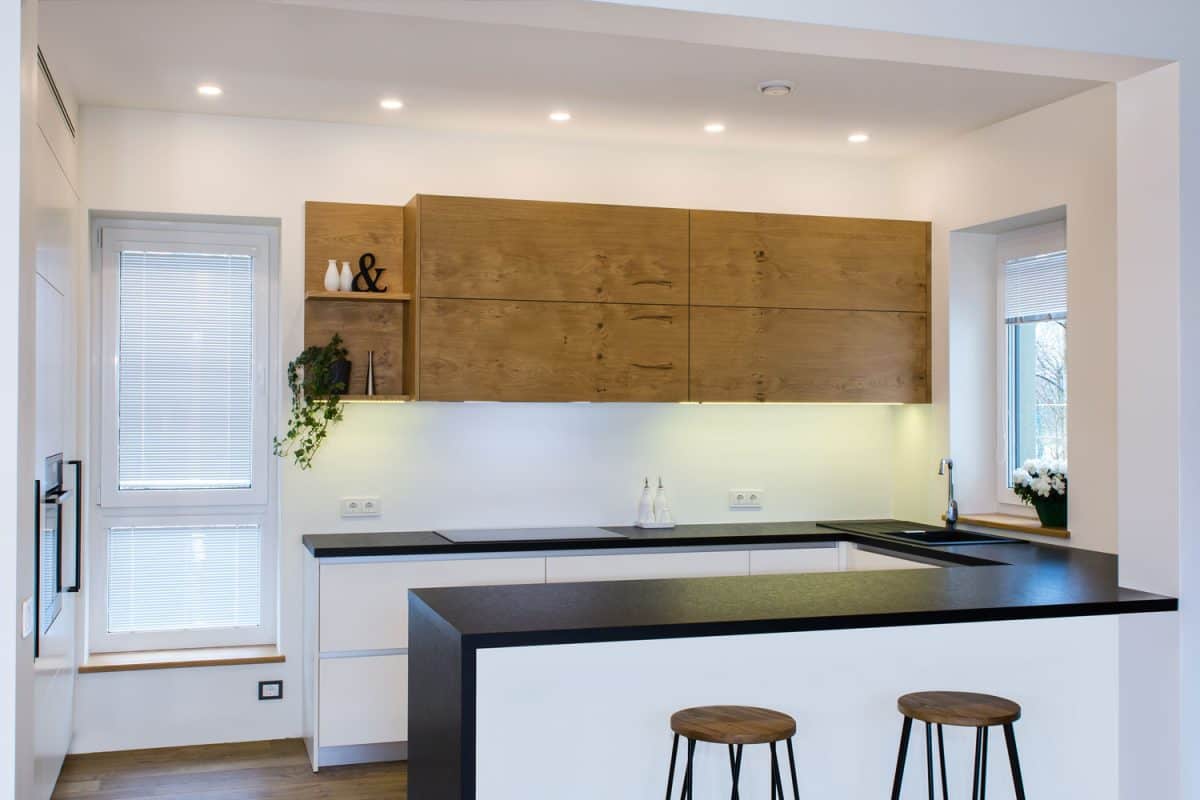 The greatest advantage of the kitchen peninsula is the ability to maximize space. A peninsula adds all of the same seating, storage, and counter space as a kitchen island. Only, the kitchen peninsula accomplishes this without sacrificing one inch of room in the kitchen. This keeps the room itself totally open, just as it always was. So, peninsulas are ideal for smaller kitchens.

Also, a kitchen peninsula is always attached to a wall or cabinet. This means the style of your kitchen will continue to flow naturally through the additional workspace. It won’t draw any unwanted attention to itself.

Meanwhile, the kitchen island is totally restricted to kitchen space. This would make it awkward to let guests or kids run around the new counter. For example, they could be in danger if you’re hurrying back and forth with sharp tools in the kitchen. Instead, the guests or children could remain safe on the other side of the peninsula’s new counter. But they could still engage with those working in the kitchen.

Unfortunately, this arrangement also means that a kitchen peninsula blocks off the neighboring room. There will only be one entry into the kitchen, which can disrupt the flow of your floor plan.

How wide does your kitchen need to be for a peninsula?

Most peninsulas add counter space that extends a few feet long. So, the drawback of a peninsula is that it pressurizes the kitchen into having a single opening. It is usually ideal to have around thirty-two inches of clearance for this opening.

Otherwise, there likely won’t be enough room to move in and out of the kitchen. This is the only major concern regarding the space for a peninsula. Bear in mind that most peninsulas are designed with an overhang. This can make the peninsula a little longer than you expected. You can read this post about whether or not kitchen countertops are glued down, and how to remove them if necessary.

Can you have a kitchen island and a peninsula?

It is absolutely possible to have both a kitchen island and a peninsula. Unfortunately, this is only possible if your kitchen is large enough to accommodate the measurements for both additions. First, your kitchen must offer the width around an island. Then, it must also allow the proper opening for the peninsula. Unless you have a very large home, it isn’t a good idea to block the open floor plan as well as the center of your kitchen.

Are kitchen islands worth it?

Kitchen islands will generally cost you a few thousand US dollars, give or take a couple thousand. And although they might add resale value to your home, they are also less likely to fit in your kitchen to begin with.

If your kitchen is large enough and busy enough, the long-term investment might be worthwhile. But unless you plan on a lot of cooking, and a lot of hungry guests, the kitchen island will probably just take up too much room.

Traditionally, most everyday kitchens are mid-sized or smaller. So, kitchen peninsulas remain the best alternative to a kitchen island. There aren’t as many unique designs on the market. But fortunately, you can still get creative with how you use and arrange a peninsula.

And although a peninsula causes blockage in between the neighboring room, this can actually serve as an advantage. Sometimes, the peninsula’s counter space can be used as a divider to deliberately create structure out of an open floor plan. The sheer versatility of a kitchen peninsula just can’t become outdated.

Remodeling is always going to be an expensive, time-consuming effort. But your kitchen can also be worth every bit of the investment. While kitchen islands and peninsulas can both serve you well, now you can decide between the right look and purpose for your own home.

How Much Space Should There Be Between The Range And Wall?

Trash Compactor Not Working – What To Do?