Sausages are a classic food staple that comes in many different varieties. Some meats and brands are healthier than others, and you may be concerned about the amount of processing involved. We've researched whether or not turkey sausage is processed.

Turkey sausage, and any sausage for that matter, is processed. Processing means that meat goes through different procedures to enhance its qualities for consumption. It includes most store-bought meats like sausage and ham.

Additionally, there is the question of what type of processing turkey sausage goes through. Keep reading to learn about how manufacturers process turkey sausages and their benefits! 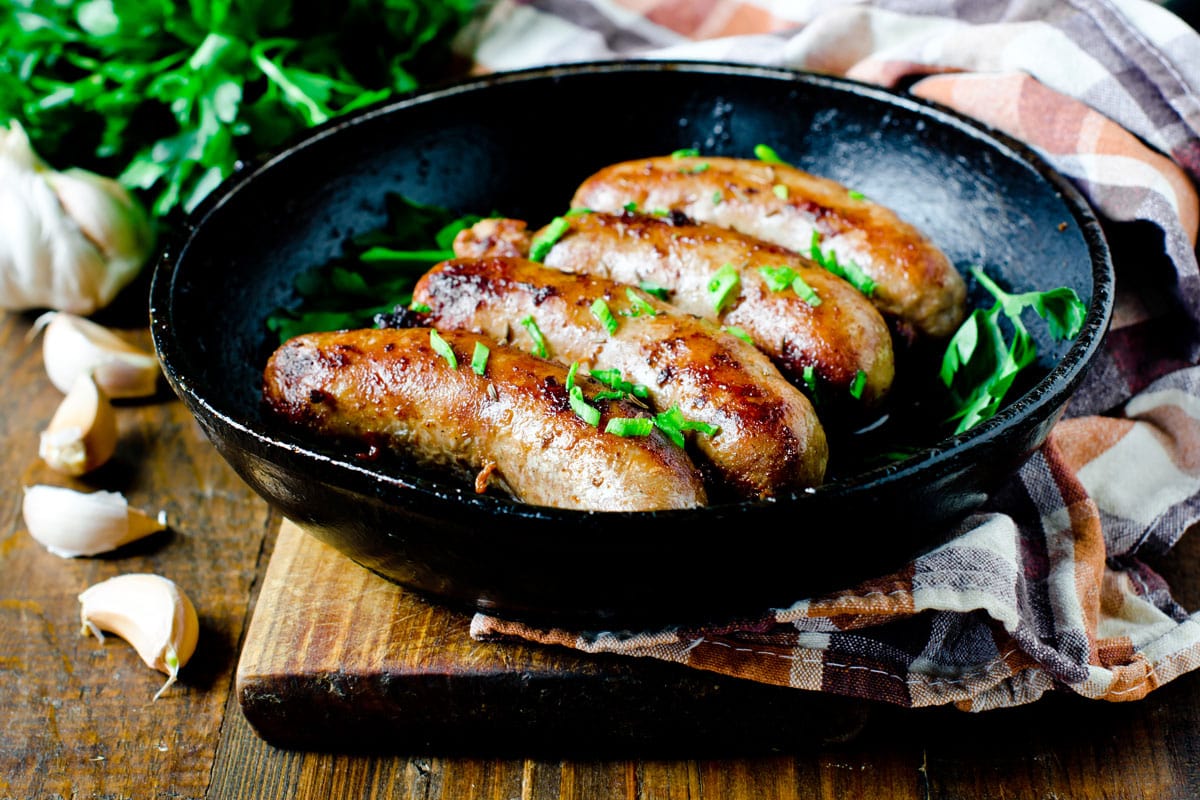 Any processed meat has its health concerns since there are additives involved. It is processed if you find it wrapped up in a store. Depending on the brand or type of turkey sausage you are buying, it might not even be pure turkey meat! The sausage casing it is in may be artificial rather than made of animal parts.

Despite this, turkey meat makes up most of the turkey sausage, and processing modifies it to stay good. The average storage time of turkey sausage is one to two months in the freezer at zero degrees Fahrenheit. However, it can be safe for consumption indefinitely.

Despite all the additives, records show fresh turkey will last longer under the same conditions. You can keep fresh turkey meat in the freezer for up to nine months at sub-zero temperatures. It's due to safety guidelines subject to processed meats such as turkey.

Meat processing shouldn't be a problem, as these foods are typically harmless for most people. Moreso, they wouldn't be certified by the US Food and Drug Administration if weren't safe to eat. Take care in selecting the brands you consume and make sure they are FDA-approved.

Click here to see this turkey sausage on Amazon.

How Is Turkey Sausage Processed? 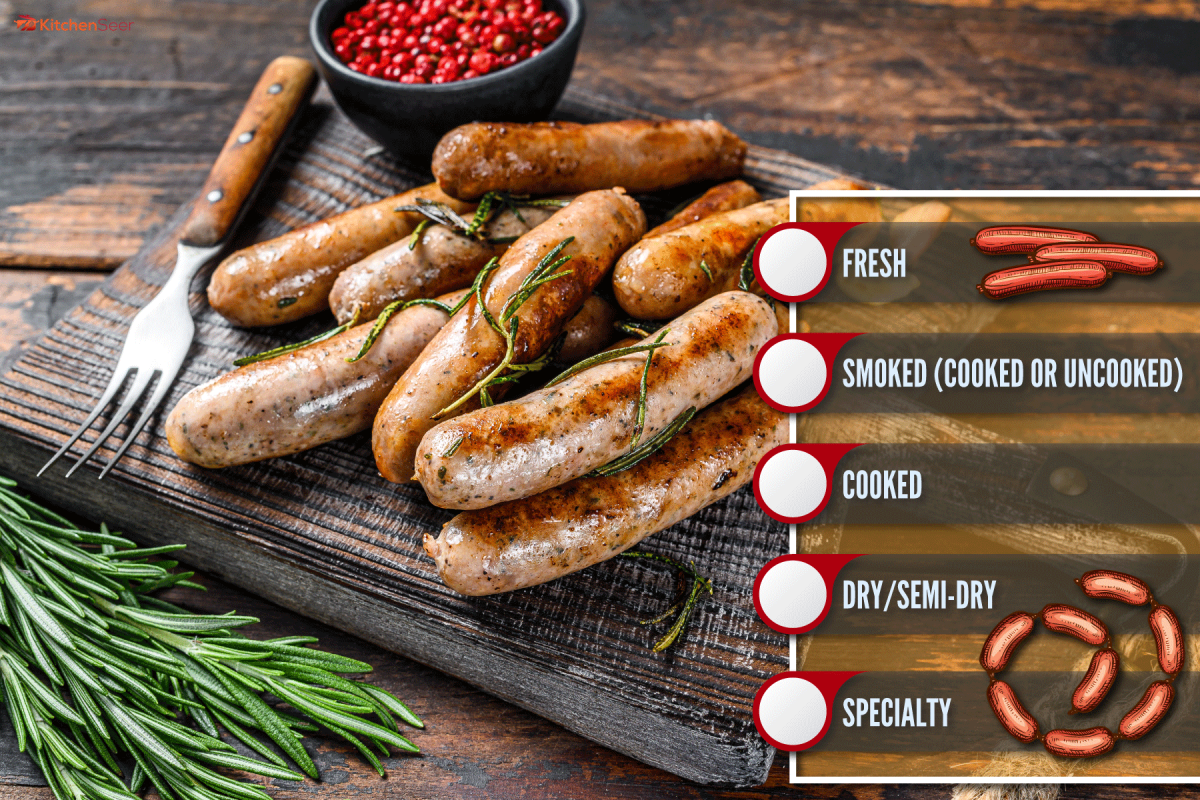 Knowing about meat and what it goes through before making it to the store can help demystify the process. While the process can differ between meats, it is mostly the same.

The manufacturer uses ground meat as a base and then mixes it with a range of spices and salt. Sometimes, additives (for longevity) or fillers are included. Fillers are non-meat food products, usually some type of starch from things like corn or rice.

After mixing, the sausage meat then goes into the casing. It can be artificial and made of cellulose or from animal skin or intestines. They mostly taste similar, but natural casings have slightly better performance as they are pliable and break less easily.

Once sealed into casings, the sausages are either ready to go or put into another packaging. These meats are then sent to distributors and wholesalers. Motor trucks are the primary method of transport for sausages.

During transport, the sausages have insulation to keep them cool and preserved. A lack of proper insulation in meat trucks leads to a spoilt product which makes it unfit for sale or consumption. Frozen and processed meat products can last in transport for a few days but never for too long.

As for taking sausages home from the store, you must store them as soon as possible. Refrigerate or freeze turkey sausages as the manufacturer recommends for safe consumption later.

Which Processed Meats Are Most Common? 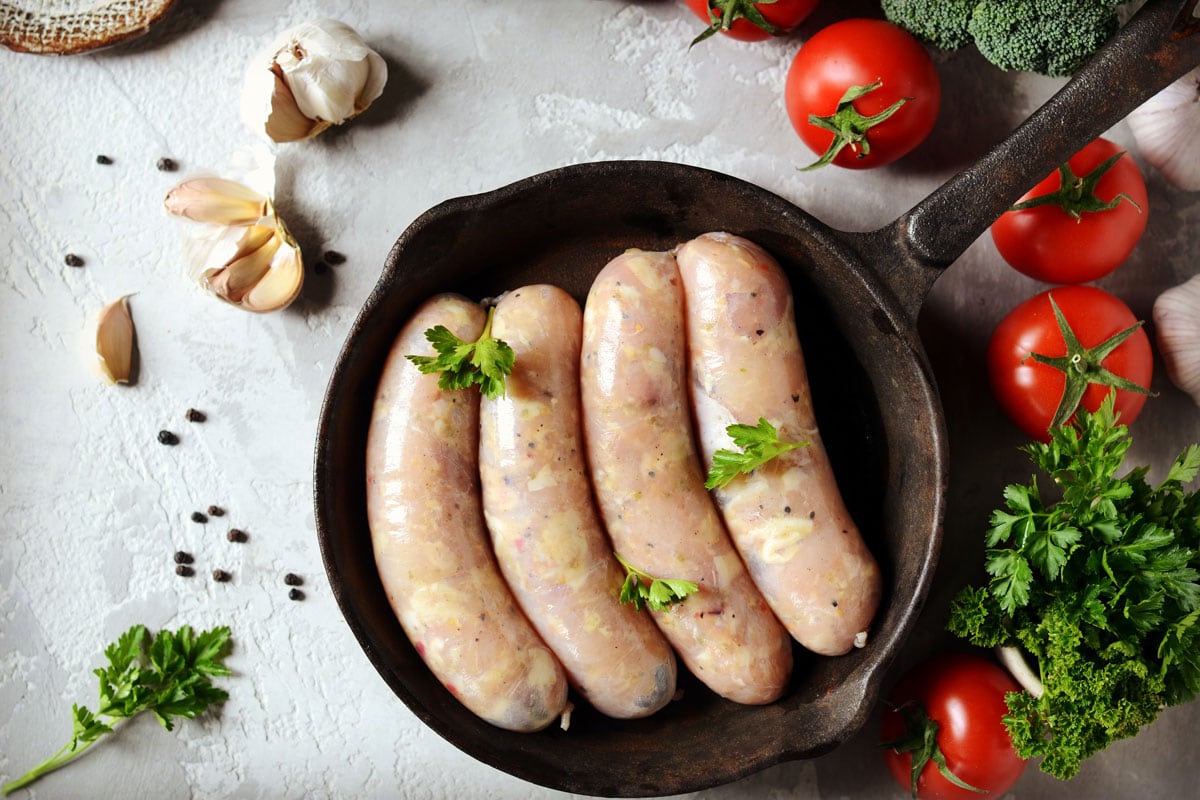 Sausage acts as an umbrella term for different kinds of processed meat. For example, hotdogs, salami, bologna, chorizo, and bratwurst are all types of sausages. It all comes down to the preparation, texture, flavor, kind of meat, and even the originating culture.

Aside from sausages, ham, bacon, and corned meat are also processed. Canned meat, such as chicken breast, also undergoes processing and can last very long. Each meat undergoes sterilization in processing to kill off harmful bacteria and microorganisms.

With this, you can store these types of meat indefinitely or at least in the fridge or freezer. Additives like sodium nitrite or potassium nitrite are common for meat curing. When it comes to food safety, botulism is a dangerous threat.

Foods low in acid or with poor canning are likely suspects of this toxin. Ideally, meats that go through processing should store at a pH of 4.6 or less. Botulism is tasteless and odorless, but the effects are fatal.

Thankfully, most meats are not under this risk once processed. Botulism cases are rare, and food that does not pass safety regulations does not make it to the market or retailers.

Any food with the proper nutritional value is healthy, which makes turkey sausage relatively healthy compared to other meats. You could probably incorporate it into your regular diet if the type of turkey sausage you consume is not full of extenders.

Turkey sausage is favorable compared to other types of sausages due to its low-fat content. Manufacturers use lean parts of the turkey meat compared to pork sausages. Generally, the calorie count per sausage ranges between 140 to 160 calories.

Here are some nutrition facts from one cup (138 g) of turkey sausage:

From these numbers, it is evident that turkey sausage is high in potassium, but it is also very high in cholesterol and sodium. The average American adult should have a daily sodium intake of 2,300 milligrams and 300 milligrams of cholesterol. These numbers fluctuate depending on your age and health status as an individual.

Cholesterol and sodium content aside, turkey sausage does have its benefits. Other vitamins in turkey sausage are vitamins B and C and B-12 and B-6. Double-check with the ingredients to be sure that any content or additives like preservatives and coloring aren't allergens.

How To Eat Turkey Sausage 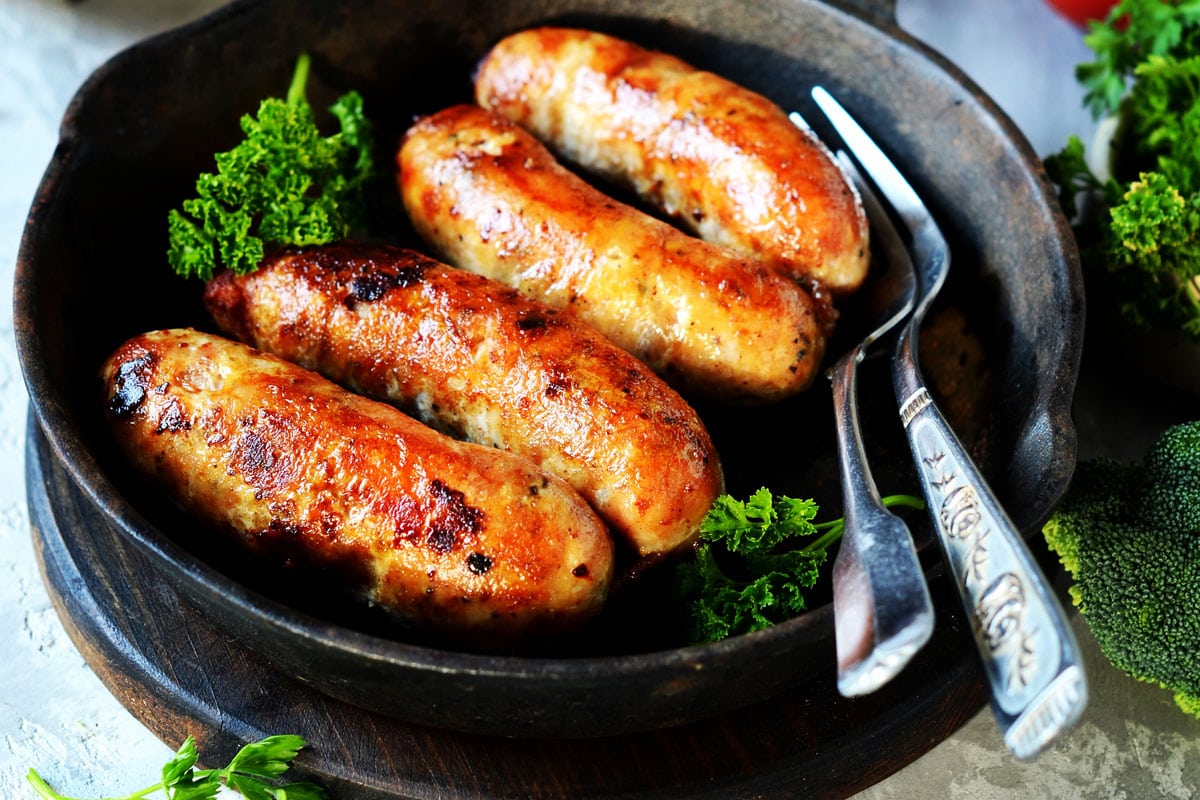 You can eat turkey sausage at any time of day, though they are a great breakfast option. You can eat it on its own or add it to other recipes. Turkey sausage is a good alternative in pasta, sandwiches, soups, meatballs, salads, and more.

If you are not into turkey sausage, there are other options. From a health standpoint, chicken sausages are a good contender. They have significantly less sodium and cholesterol by comparison (700 mg and 75 mg, respectively) but have a similar calorie count.

You may find more benefits from vegan substitutes. For some, going vegan is better for the environment. Vegan options are popular for health or ethical reasons.

Tofu is usually a plant-based alternative. However, you can also find sausages based on fennel. Remember, vegan sausage alternatives undergo even more processing than their traditional counterparts.

For some vegan sausage, you may be unable to tell that it is not meat, but the taste or texture might deter some people. Additionally, vegan sausages still have similar sodium, calorie, and protein levels as their meat counterparts. 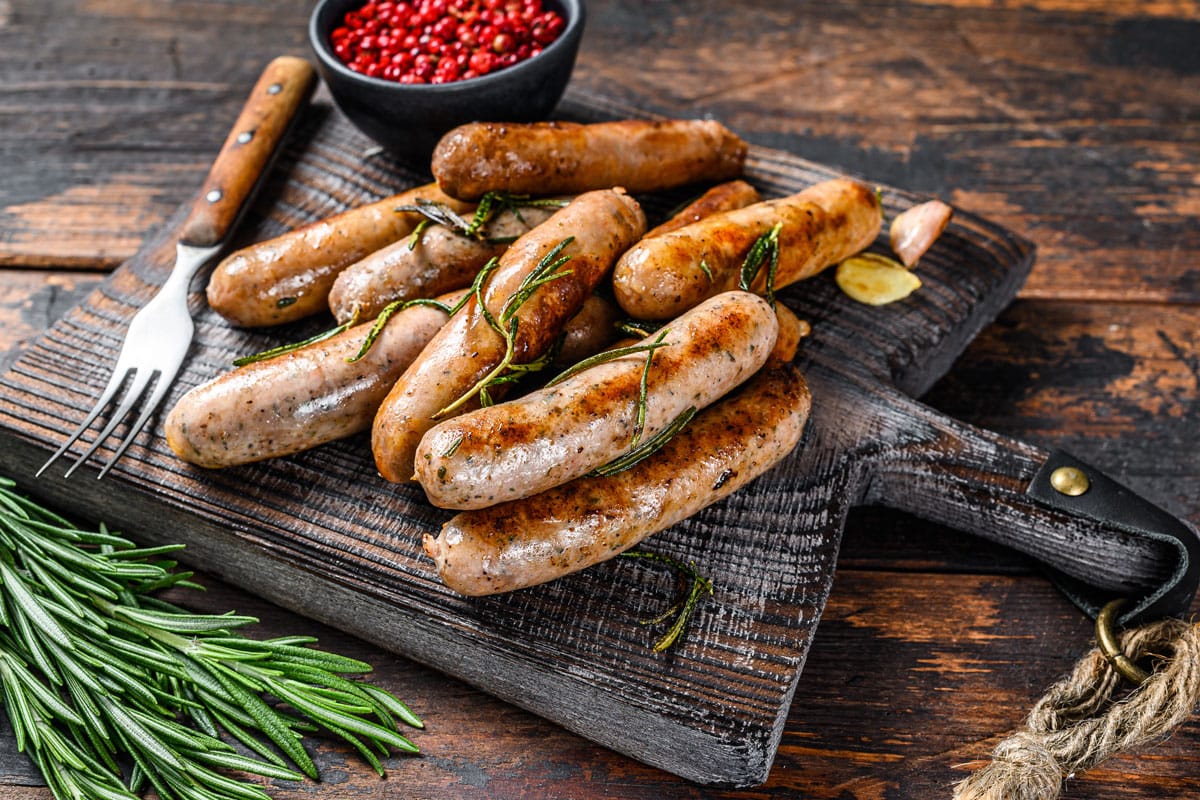 Turkey sausage is processed. Unless a meat product is fresh or frozen, it has most likely been through some processing: sausages and cured meats with additives which are salts and spices.

Turkey sausage is considerably healthier than most types especially compared to pork sausage. On the other hand, chicken sausage has less sodium and cholesterol than turkey sausage.

Did you find this post helpful? If you did, check out our other articles before you go!

What Meat Grinder Plate Sizes Should I Have [Inc. Size For Hamburger, Sausage, & More]?

Is Kielbasa & Sausage The Same Thing - What Is The Difference?

Candy Melts Not Melting — What To Do?

How to Make Large Amounts of Hot Chocolate

Is Chuck Roast Good For Grilling?