It's rare to find a food that is inexpensive, delicious, and full of nutrition, but the humble lentil checks all of these boxes. If you want to give lentils a try but aren't quite sure how to make them, we've got you covered.

You can cook lentils by simply boiling them in a pot of water until they reach the right texture. But there are so many great ways to use these tasty pulses! We've got 14 great recipes for how you can make soups, salads, international dishes, meat substitutes, and even desserts with lentils!

If you want to learn more about basic lentil techniques and how to whip up all of this tasty fare from this little lense, read on to learn all about it! 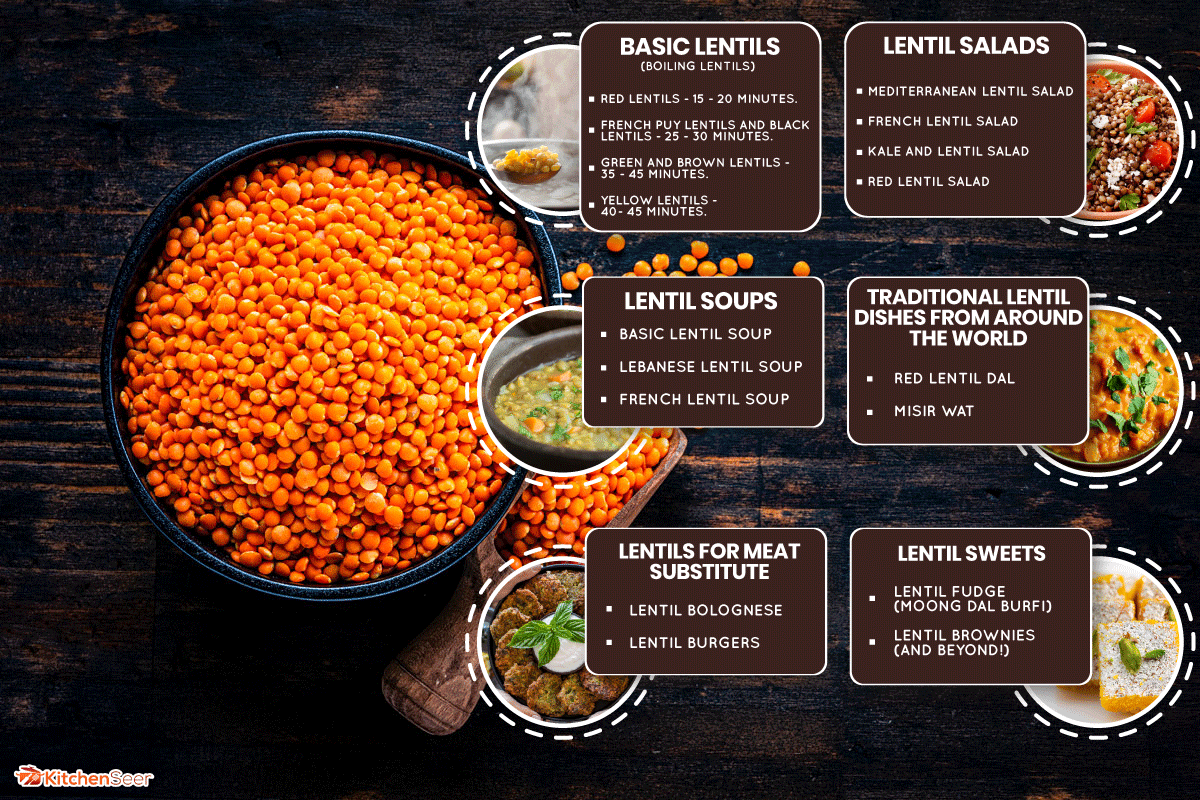 Before we look at some of the more intricate recipes, let's look at a basic method you can use for any lentil. This method isn't as flavorful as some of the others we'll see, but it gets the job done.

Before we look at this method, let's talk about an important step you should follow for every lentil recipe: sift through them and check for any foreign objects in your lentils. Sometimes small, lentil-sized stones can make it into the package, and you definitely want to remove those before you start cooking.

Now, let's take a look at the basic lentil method. Of course, you can simply follow the directions on the package of lentils. But you'll notice that the package directions call for different amounts of water and different cooking times depending on the type of lentils you bought.

One way to get around this is to cook your lentils like pasta. Simply fill a pot with a large amount of water, bring it to a boil, and then cook your lentils until they reach the right texture for you (keep in mind that some varieties, like red lentils, cook faster than others.

We definitely recommend salting the water to get some more flavor into your lentils. You can also add other flavor enhancers, such as bay leaves, garlic, or even stock cubes. 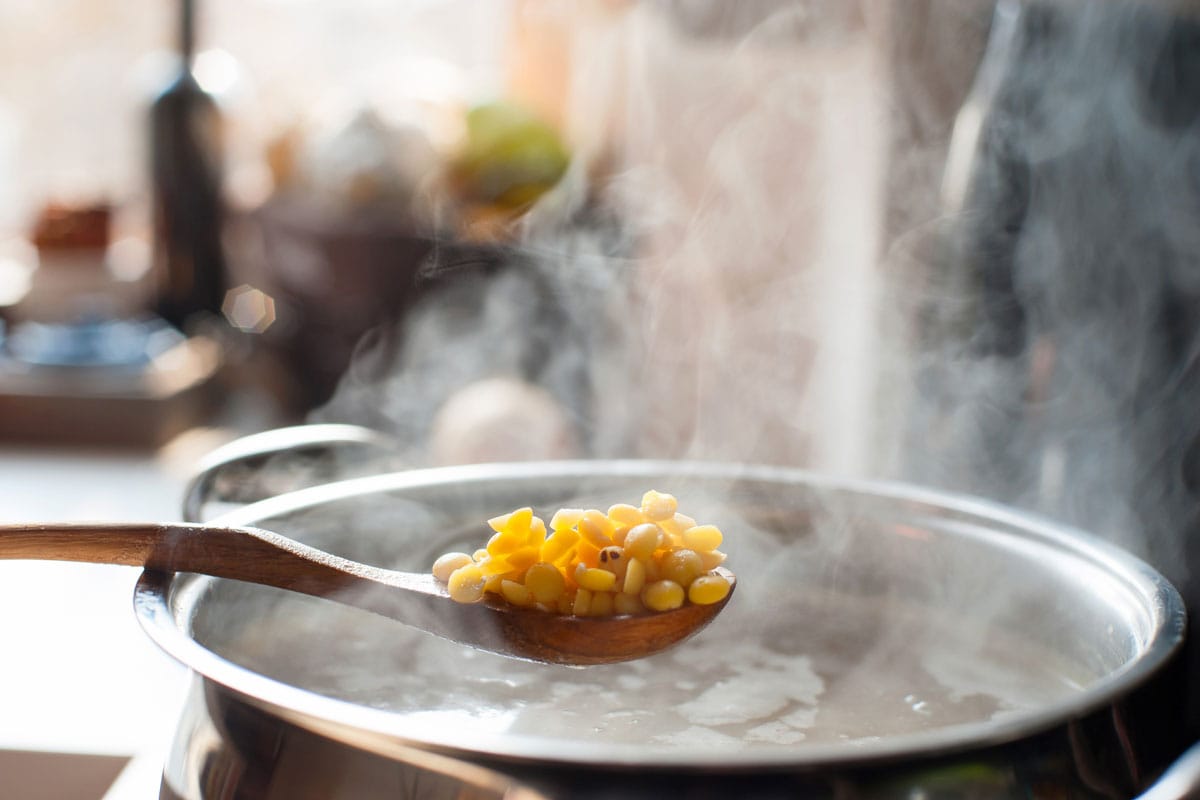 How Long to Boil Lentils

While we recommend trusting your senses when checking for doneness, here are some rough time estimates for different varieties of lentils:

These lentils can be served as a nutritious side dish on their own or used as part of another recipe, such as making salads. 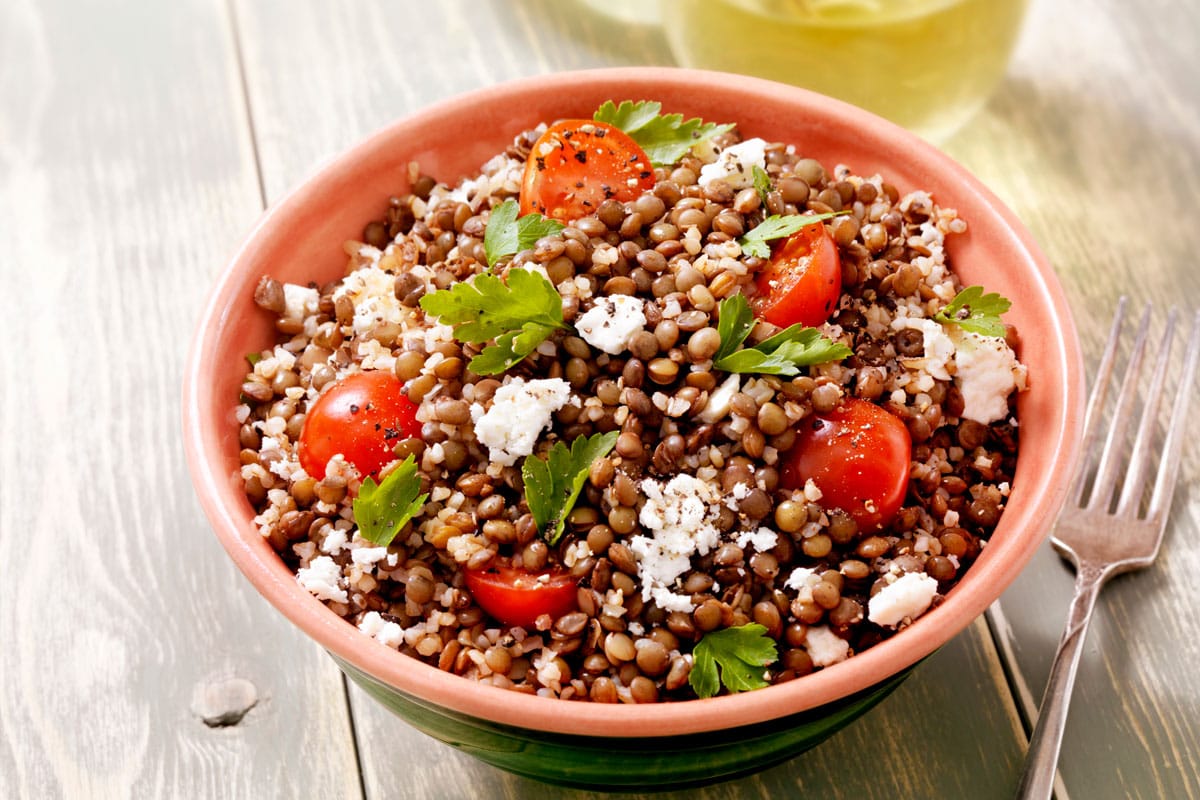 Lentils can add protein, texture, and great flavor to salads. Most lentil salads call for green or black lentils, as these tend to hold their shape better. However, you can make a great salad with the softer red lentils too, as we'll see below.

Serve these lentil salads as a healthy and satisfying side or in a larger portion for a nutritious, fiber-and-protein-packed lunch!

If you like Greek salads, you'll love this Mediterranean lentil salad from Recipe Runner. Cucumbers, tomatoes, kalamata olives, red onions, feta, and parsley are mixed with green lentils. The zingy, olive oil-based dressing is flavored with oregano for a real Greek treat.

From Greece, we'll move east to France, a country that loves lentils so much that they have their very own variety. You can use any French green lentils for this recipe from Serious Eats, but if you're feeling fancy go with lentils with the Puy PDO label. These are carefully regulated and must be grown in the volcanic soil of the plains of Velay.

The other flavors in this salad are classical French favorites as well. The lentils are cooked with mirepoix (a combination of onion, carrot, and celery) as well as thyme and bay leaves. Walnuts, goat cheese, and a Dijon vinaigrette complete these lentils that will bring a touch of Paris to your table.

Combine these two superfoods in this super salad from Bon Appétit. The recipe calls for French green lentils or beluga lentils, a type of black lentils that cook similarly to their French cousins.

Along with the kale and lentils, you'll find almonds, olives, scallions, feta, and a dressing made with a spiced oil in this gourmet recipe.

As we mentioned, most salads don't call for red lentils because they get soft very easily. This recipe from Food & Wine is an exception. Their secret is to cook the red lentils until just tender. Feta, beets, and a variety of spices make this salad positively pop with flavor. 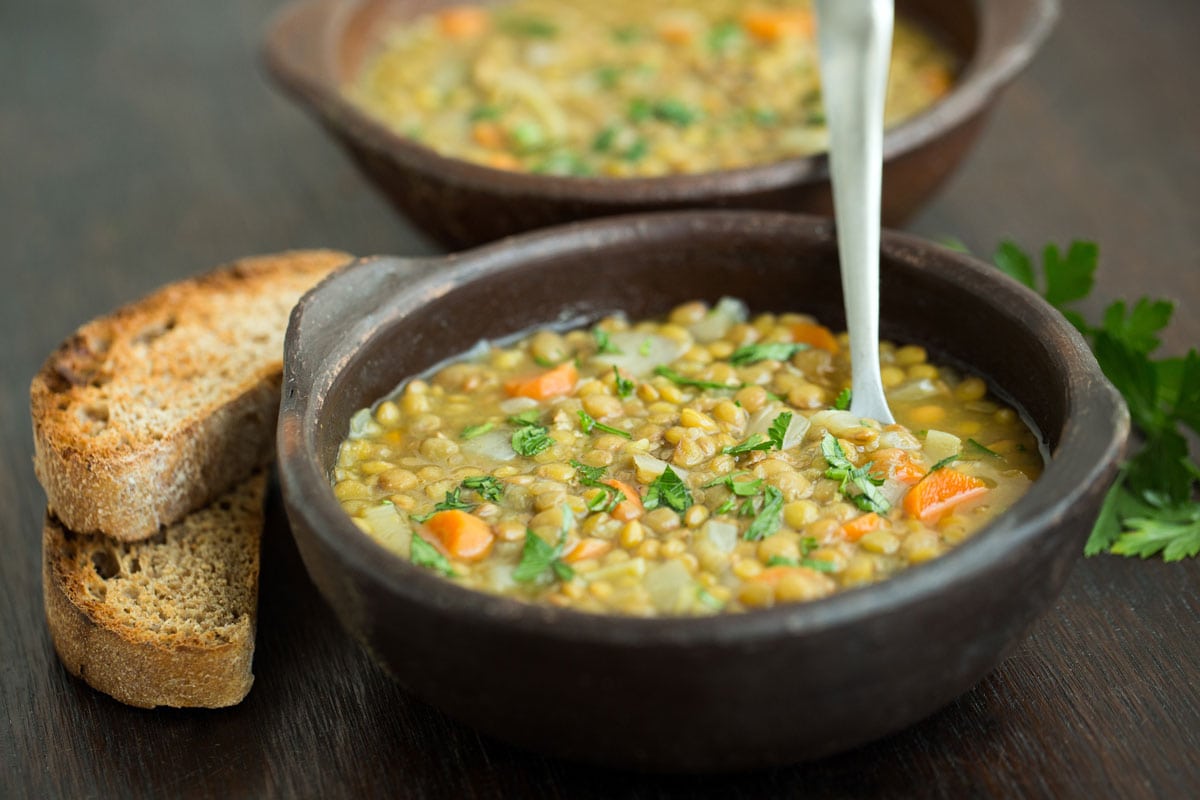 Lentil salads are a great option when the weather is fine, but as the mercury drops you may want something warm and comforting. Enter lentil soups. Lentil soups are among the heartiest, even if you forego any meat in yours. There are many styles so you can mix them up for variety too! Let's look at a few.

This recipe from BBC Good Food is about as simple and satisfying as they come. Just cook red lentils in stock with some carrots and leeks and then sprinkle with parsley. The red lentils break down, making for a thick, comforting soup.

If you want a red lentil soup with a bit more zing, try this recipe for Lebanese lentil soup from Plant-Based Folk. The addition of cumin, turmeric, and lemon give this soup its fantastic flavor. If you like the lentil soup served at many Middle Eastern restaurants, you will love this!

Of course, the French love soups as much as they love lentils, so it's no surprise to see them together. This recipe from Epicurious features the aforementioned onion/ carrot/ celery combo known as "mirepoix," as well as garlic, tomatoes, and a touch of balsamic vinegar to really elevate it.

Traditional Lentil Dishes from Around the World 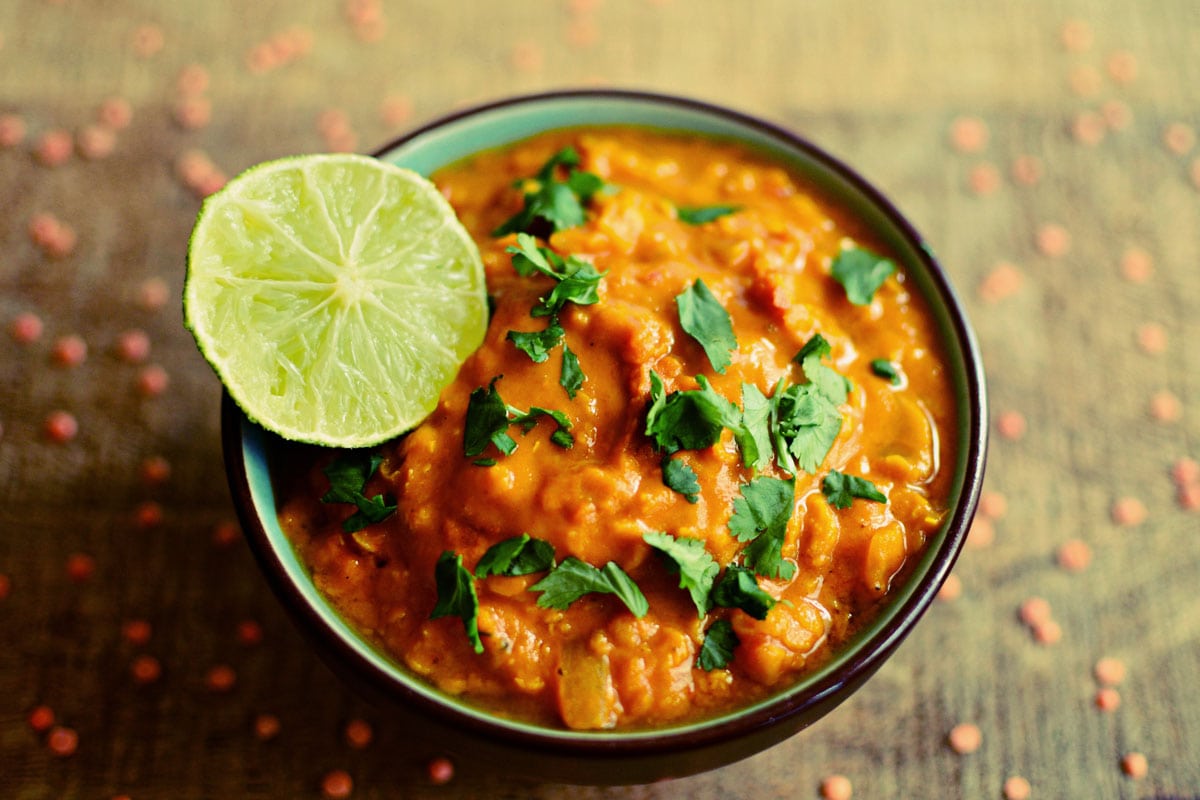 Humans have been cultivating lentils since the Bronze Age. Lentils even get a mention in the Book of Genesis! Given this long history, it makes sense that lentils have made their way all over the world.

While we've already seen some salads and soups from across the globe, we've got some more iconic lentil recipes from far-flung cuisines for you here.

In India, "dal" can refer to split pulses (such as lentils) or to the dishes made with them. If you've ever had dal at an Indian restaurant, it was most likely one made with red lentils, like in this recipe from The Wanderlust Kitchen.

Like many Indian dishes, this dal is flavored with a wide array of spices, including cumin, cardamom, turmeric, and cinnamon. And, of course, chilies (although you can adjust it to fit your preferred spice level).

These ingredients can be hard to find, but you can make them yourself in this recipe for niter kibbeh and this one for berbere from The Daring Gourmet. 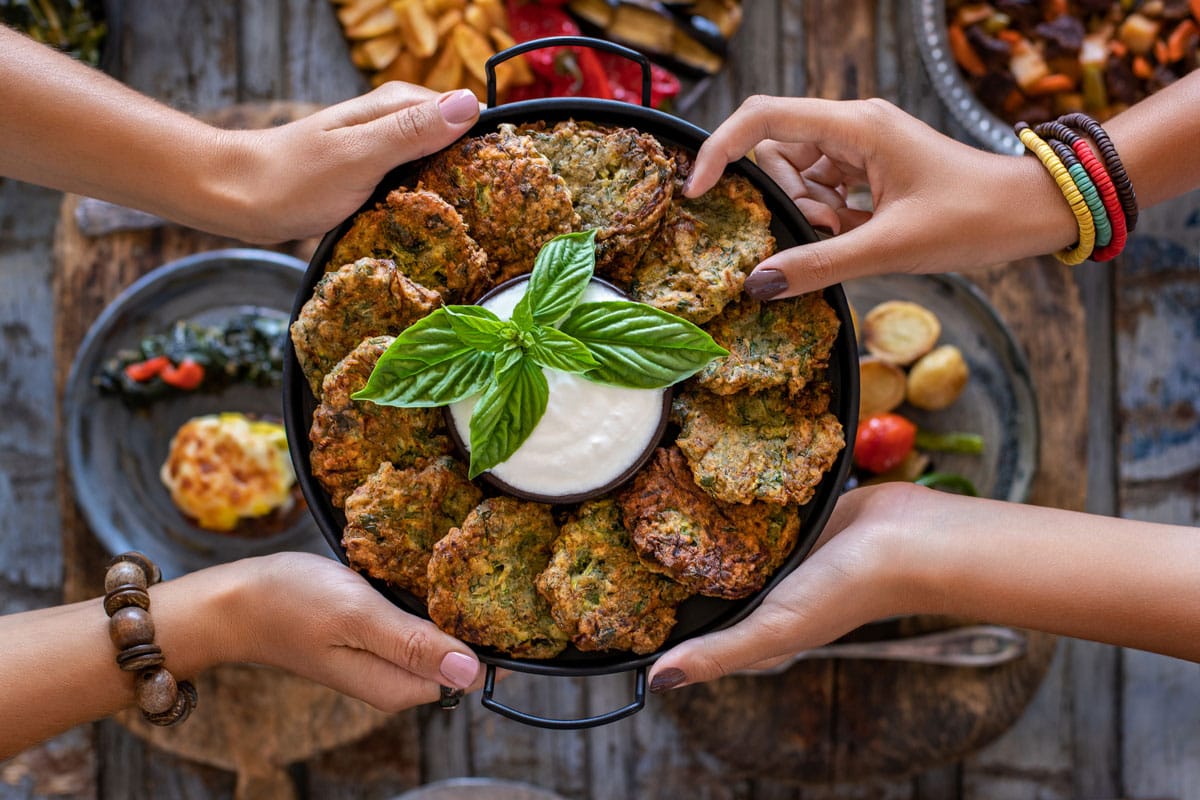 Whether you've gone meat-free or simply trying to cut back, you can make a lot of great, satisfying dishes with lentils in lieu of meat. Here are a few of the most popular.

Bolognese is traditionally made with lots of meat, but this recipe for lentil bolognese from Feasting at Home is just as hearty and flavorful. It calls for caviar lentils, which is another name for the small, black beluga lentils. You can also other small lentils, like French Puy lentils, for this recipe.

Lentil burgers are at their best when they don't try to imitate meat, but rather create a satisfying stuffing to fit between two buns. This recipe from Cooking for Peanuts does just that. Instead of trying to imitate meat, it embraces the flavor and texture of red lentils while augmenting it with some other tasty veggies.

If you want a protein-rich veggie patty that celebrates lentils, this is the one for you. If you'd prefer a veggie burger that tastes like the real thing, you'll be better off with a Beyond Burger or Impossible Burger.

If you haven't heard of them before, sweets made with lentils can sound a bit crazy. But once you've tried them, you'll be hooked. Lentils purée can be used as a healthy alternative to other ingredients in sweets, but they can also be featured. Let's take a look at recipes with both approaches. 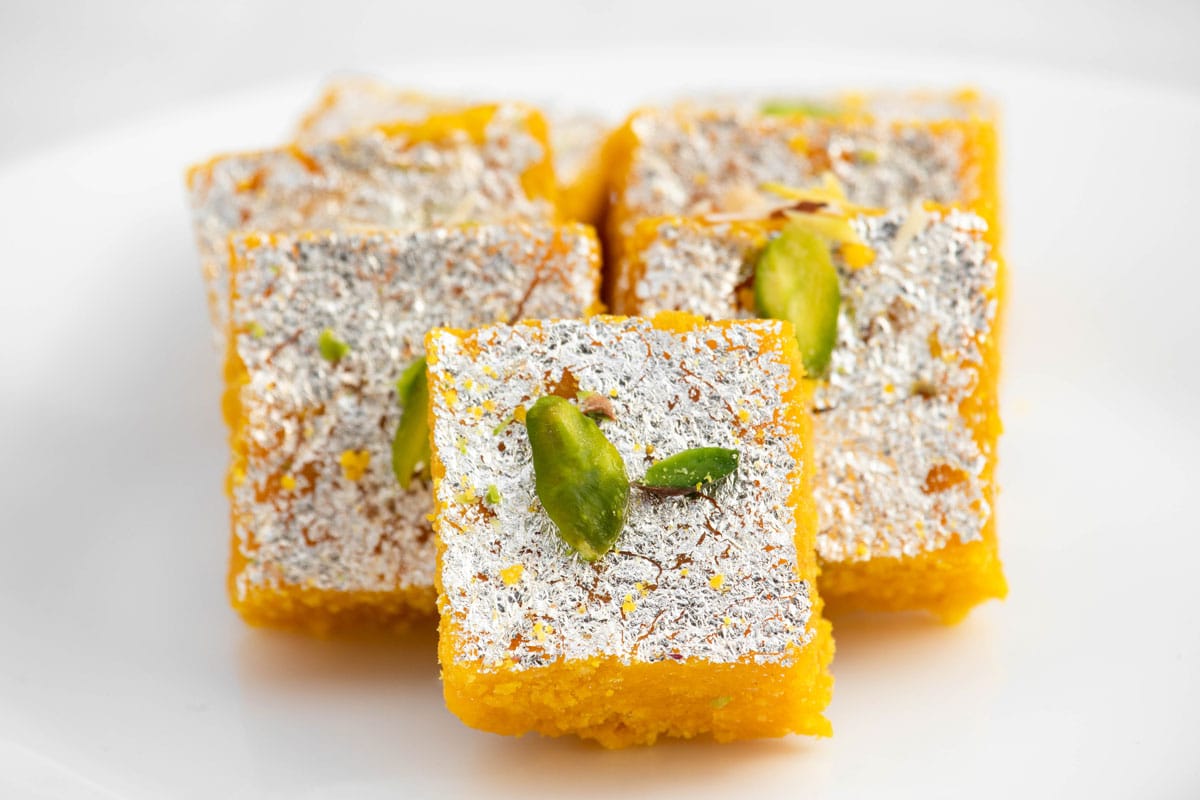 This traditional dessert comes from India. This recipe from Ruchi's Kitchen uses yellow lentils (moong dal) to make a fudge (burfi). The recipe calls for mawa, an Indian dairy product. It can be hard to find mawa, so you can substitute powdered milk or follow one of her recipes to make your own.

Lentil Brownies (And Beyond!)

You can replace some of the oil or butter in baking recipes with puréed lentils. Yes, you read that right. The taste of lentils is mild enough that you won't notice it in your baked goods, such as these lentil brownies from the CIA (The Culinary Institute of America, not the other one). Watch the video below for more information on this topic. 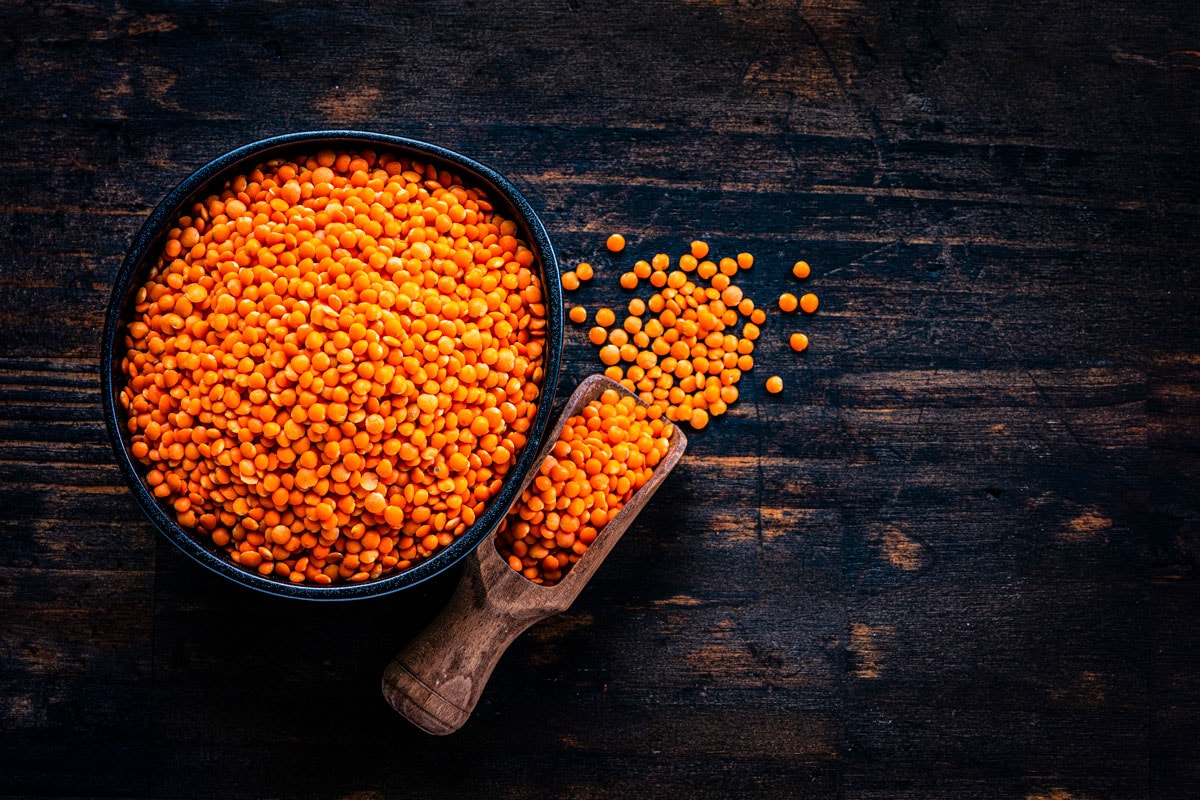 We hope that you now know how to tackle the lentil and have augmented your culinary repertoire with some of these great recipes. Whether you decide to make a salad or a brownie, you can now wield the lentil with more confidence.

If you found this article helpful, check out these great posts:

Should You Drain Beans for Chili?

What Is The Best Container To Store Milk?

Can You Pour Boiling Water into a Ziploc Bag?

How To Soften Butter For Spreading