Because the Dutch oven is so versatile, you can use it for multiple methods of cooking a chicken. Although each requires unique steps for the process, the Dutch oven allows some of the more popular approaches, such as:

Although using a Dutch oven can be fairly straightforward, it’s still important to understand how it works differently from other appliances. Keep reading to learn how big your Dutch oven should be for a chicken, how to make use of a Dutch oven’s advantages, and what you should avoid cooking in it. 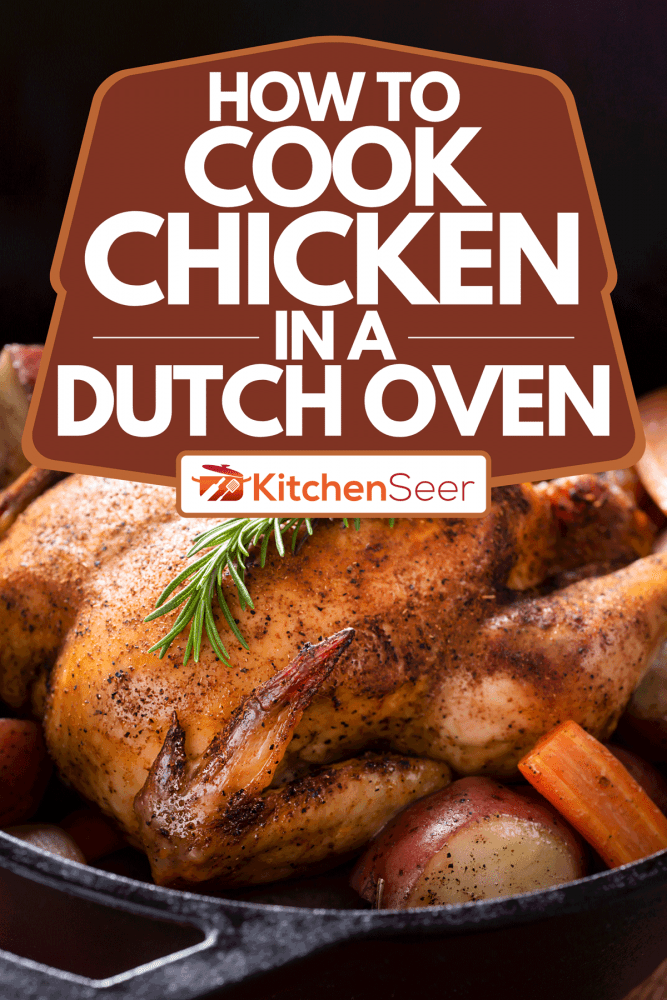 How big of a Dutch oven do I need for a chicken?

In order to fit an entire chicken, you will generally need a six-quart Dutch oven. However, it’s important to consider that you may want to sit the chicken on vegetables, which would also require space.

Also, Dutch ovens can be very heavy as they are made from cast iron. You may have to avoid larger sizes if you can’t maneuver the weight. Five-quart Dutch ovens can still hold a conventional four-pound chicken. 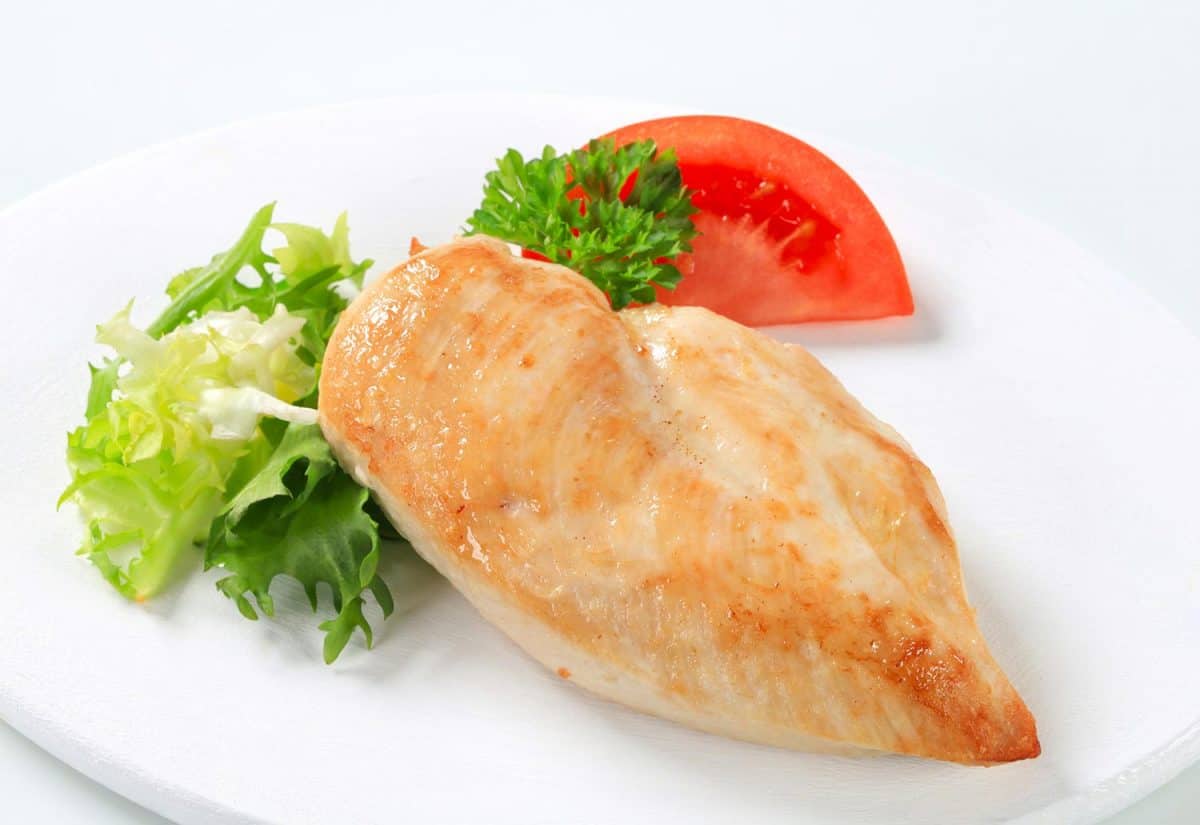 Searing your chicken is a method of suddenly and rapidly browning it at a high temperature. This makes the cast iron of a Dutch oven ideal because it withstands more intense temperatures. That will allow you to fully preheat the entire Dutch oven, which means that the heat will be imposed on your food from all directions.

One of the most important tricks to searing chicken properly is to pat the meat dry before you brown it. If you leave any moisture, then the meat is going to steam instead of searing properly. Also, patting the chicken dry will result in  crispy skin.

Sometimes, it might be best to sear using lower temperatures if your Dutch oven was made with enamel. That type of finish can sometimes crack under the high heat required for proper searing. 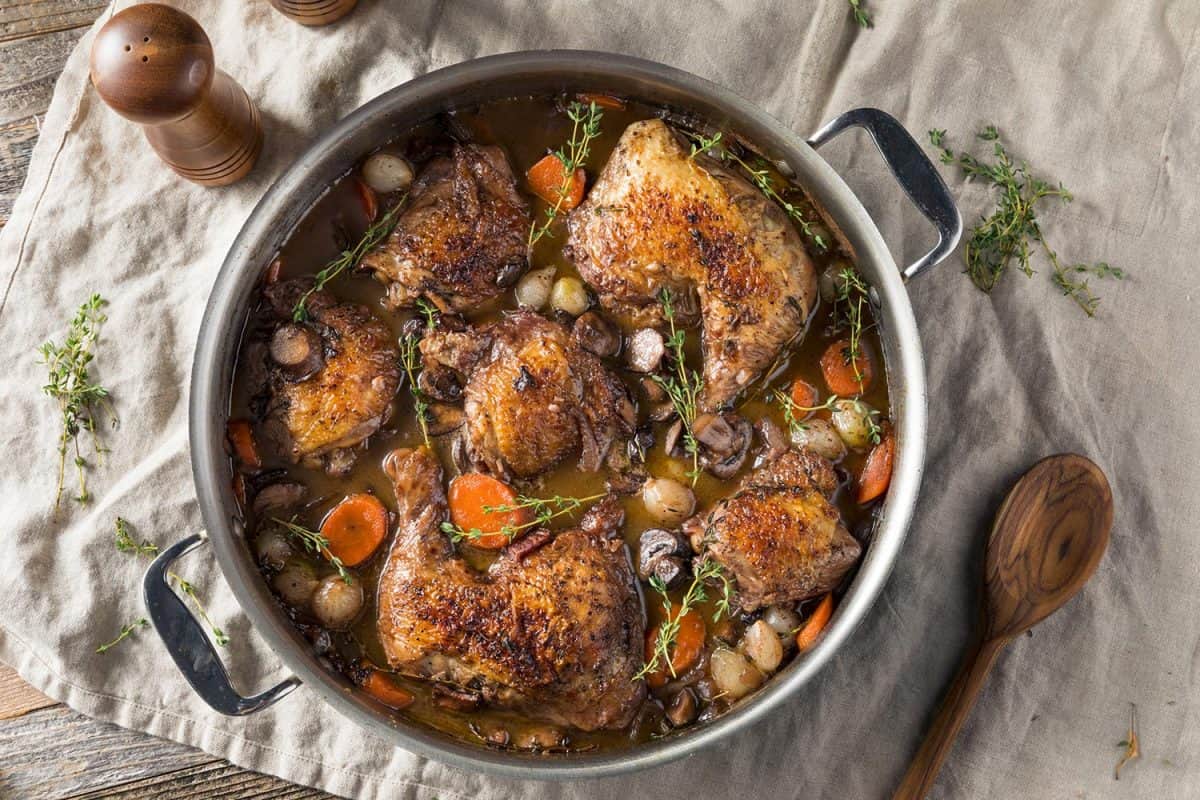 This method of cooking chicken will require you to sear the meat first, in a small amount of oil on medium heat. Make sure to give separated pieces of chicken enough elbow room. However, chicken is usually kept whole when it’s braised, unless you are preparing soup or stew.

Next, you will slow cook the chicken in some kind of liquid, which is usually your broth of choice. The braising liquid should only partially cover your chicken. Use lower temperatures when you braise to make sure the outside of the chicken doesn’t dry out too quickly.

Give the braise just enough time, depending on the quantities and temperatures, and your chicken will become more tender. Also, always cover the Dutch oven with its heavy lid. This will ensure that steam is able to cook the meat above the braising liquid.

To simmer your chicken, you will first need to bring the liquid in the Dutch oven to a boil and then reduce the heat. Any kind of simmering is simply a step below boiling, where the heat is less intense, and the water isn’t bubbling as much.

This results in less steam, but keep your Dutch oven uncovered. The heavy lid will produce too much steam, and quickly agitate the simmering until it’s too active. This will lose the unique consistency in the chicken, which is the point of simmering instead of alternative methods.

Firstly, you should preheat some type of shortening in the Dutch oven, such as animal fat or vegetable oil. The shortening usually going to fills up about half of the Dutch oven. The ideal temperature is 250 degrees.

While the shortening preheats, prepare the chicken with plenty of flour and any unique seasoning. This combination is the most likely to change from one recipe to the next. Then, you can dip your prepared chicken into preheated oil in the Dutch oven.

Note that Dutch ovens are usually temperamental with deep frying. They can either create the perfect crust or ruin the meal. 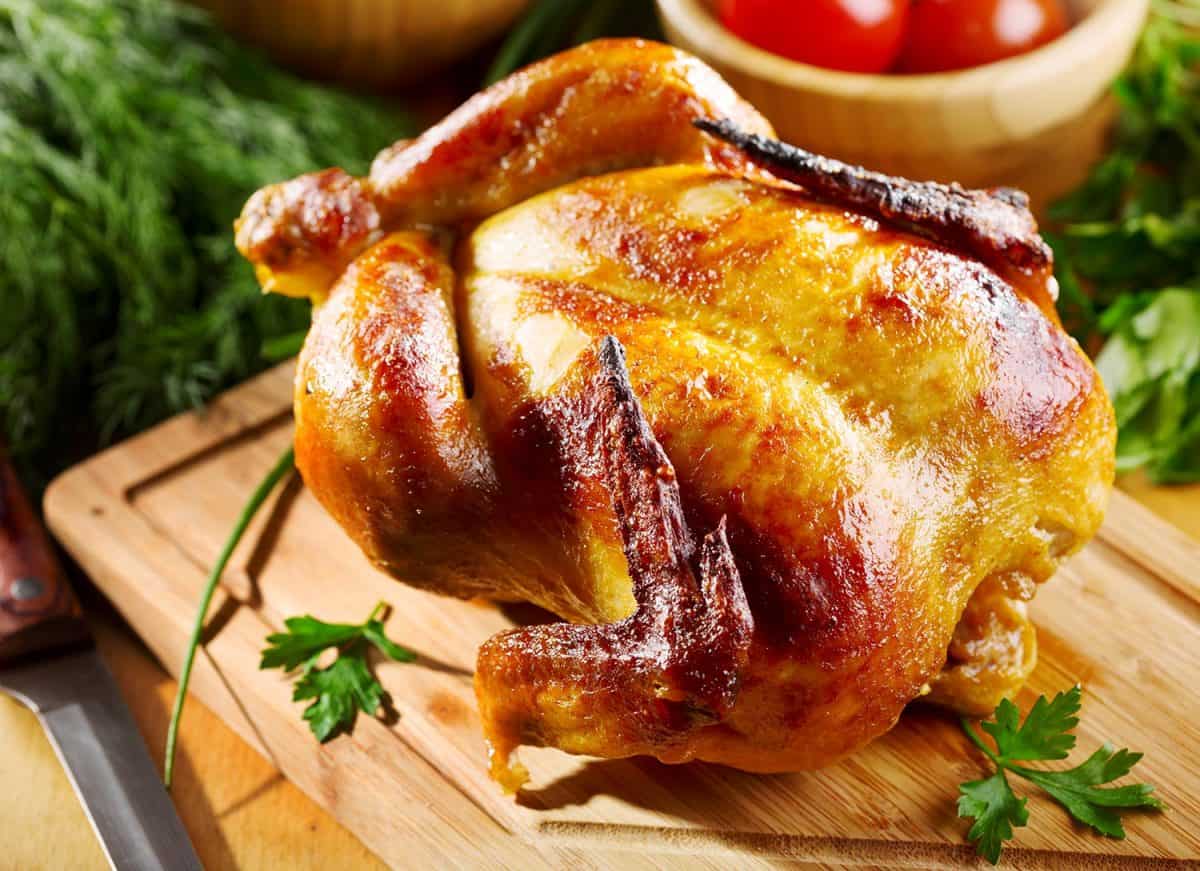 Because Dutch ovens have high sides, it is an ideal cooking pot for roasting an entire chicken. First, you will want to preheat your Dutch oven according to the desired recipe. Meanwhile, you can season the roasted chicken and prepare your vegetable base.

Next, the trick to roasting whole chickens in a Dutch oven is to bake the meat covered and then uncovered. First, keep on the lid. Partially through the bake, remove the chicken to quickly season some more, and then bake the again with the lid off. This allows you to keep the chicken moist enough, but still finish the job by creating a crispy skin.

Why is cooking in a Dutch oven better?

One of the greatest advantages of a Dutch oven is its versatility, which reduces the need for additional appliances and cookware. This will save you time, money, and invaluable storage space in the kitchen. That is especially useful because kitchens are ordinarily smaller than the rest of the rooms in your home.

Secondly, although Dutch ovens are heavy, they are uniquely suited to be moved from a stovetop directly into an oven. But Dutch ovens can also be preheated in the oven beforehand, which helps create an even temperature right when you begin cooking.

You can read the post "Where To Buy A Dutch Oven [Top 30 Online Stores]" to find the ideal place to purchase a new Dutch oven.

What is the best thing to cook in a Dutch oven?

The best thing to cook in a Dutch oven is baked bread. This is mainly because a Dutch oven has the perfect design to distribute heat throughout the baking process evenly and has a lid for trapping moisture. It creates the perfect amount of steam for any kind of bread, allowing you to make even the most artisan bread recipes.

Because you can preheat the Dutch oven in the traditional kitchen range oven, moisture in the bread dough rises immediately. This means that the crust will not solidify before the bread can become totally full. You can read the post "Can I Put A Dutch Oven In The Oven?" to learn how to properly preheat a Dutch oven with a kitchen range.

The other ideal recipe for a Dutch oven is a meaty soup or stew. That’s because the Dutch oven's thick cast iron maintains a consistent heat level from beginning to end of the cooking process. This will result in perfectly even simmering or braising, which is useful for many kinds of recipes, including chicken.

What can you not cook in a Dutch oven?

A few things are not ideal for cooking in a Dutch oven, and each for different reasons. The first type of food to avoid is anything with a particularly strong odor, such as garlic or strong cheese.

That’s because these smells are likely to linger after you cook them in a Dutch oven. Since you can use the Dutch oven for so many different recipes, this may result in a very problematic aftertaste.

Also, it is always best to avoid foods with high acidity. Food like tomatoes can sometimes break down the durability of your cast iron and make it rust. Even worse, these corrosive foods may also take on the taste of your cast iron.

Why does everything stick to my Dutch oven?

New Dutch ovens are not able to handle food that is especially sticky such as eggs, certain fish, or sticky sauces such as barbecue sauce or syrups. The cast iron should be seasoned beforehand, if it is not enameled, or the food will stick.

As a result, food like eggs cooks too quickly. Seasoning a cast iron pan means baking oil into the surface, which will also protect from rust.

Click here to see this cast iron seasoning on Amazon.

Dutch ovens are highly useful and easy to use, but there are still certain steps that need to be taken for them to be fully effective when cooking. The cast iron design makes a Dutch oven durable enough for simple yet unique tricks in the kitchen.

Now it is clear what foods are best for a Dutch oven, and which kinds should be avoided. Also, you will be able to prepare a range of popular chicken recipes.

Are Pans Oven-Safe? [Even With Silicone Handles]

How Do You Store Squash? [Inc. In The Fridge And Freezer]

Can You Eat A Black Drum Fish? [Yes! Here’s How To Prepare It!]