Getting new appliances to use around the kitchen is an exciting time. Cooking is going to get that much easier! However, there's a bit of a learning curve. We have to know how to use our new device before even starting to prepare meals. If you're wondering how to close the lid on a Cuisinart pressure cooker, you've made it to the right place!

Although Cuisinart offers many models of pressure cookers, closing the lid is roughly the same across all of their products. To begin, you want to set your lid in place. Once you have it on the pressure cooker, turn the handle counterclockwise. This should lock the lid in place. From there, turn on your system, and you're ready to cook!

Having a guide to help you is the first step to familiarizing yourself with using a pressure cooker. But, a visual demonstration is also necessary in some cases. Not all Cuisinart pressure cookers are the same, so if you'd like to check out specific models and how they operate, keep on reading. 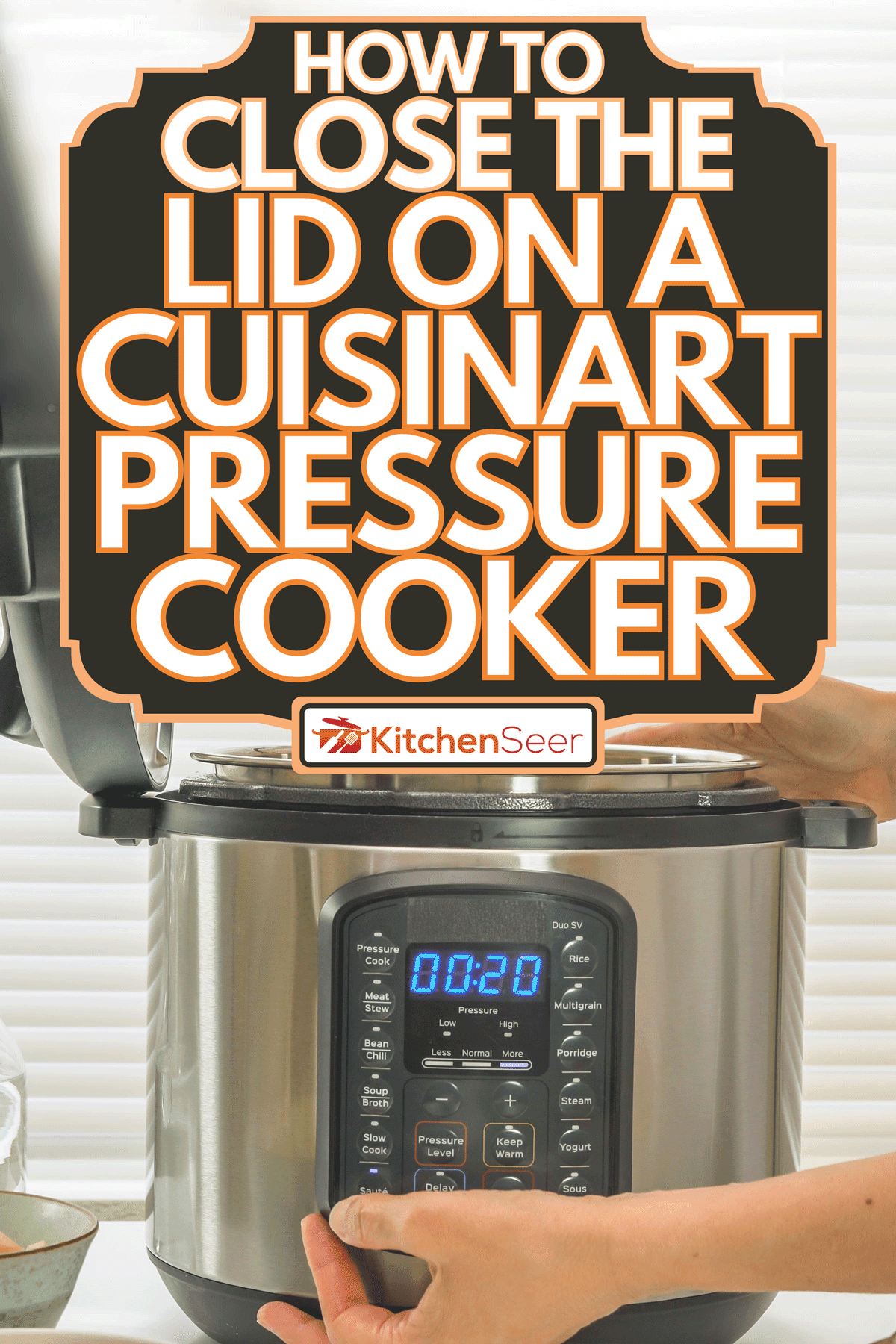 Closing The Lid On A Cuisinart Pressure Cooker

The first thing you want to do is determine the Cuisinart model you own. In general, Cuisinart will have two variations: an electric pressure cooker and a stovetop one. The model that you will have to pay close attention to is the electric variation. 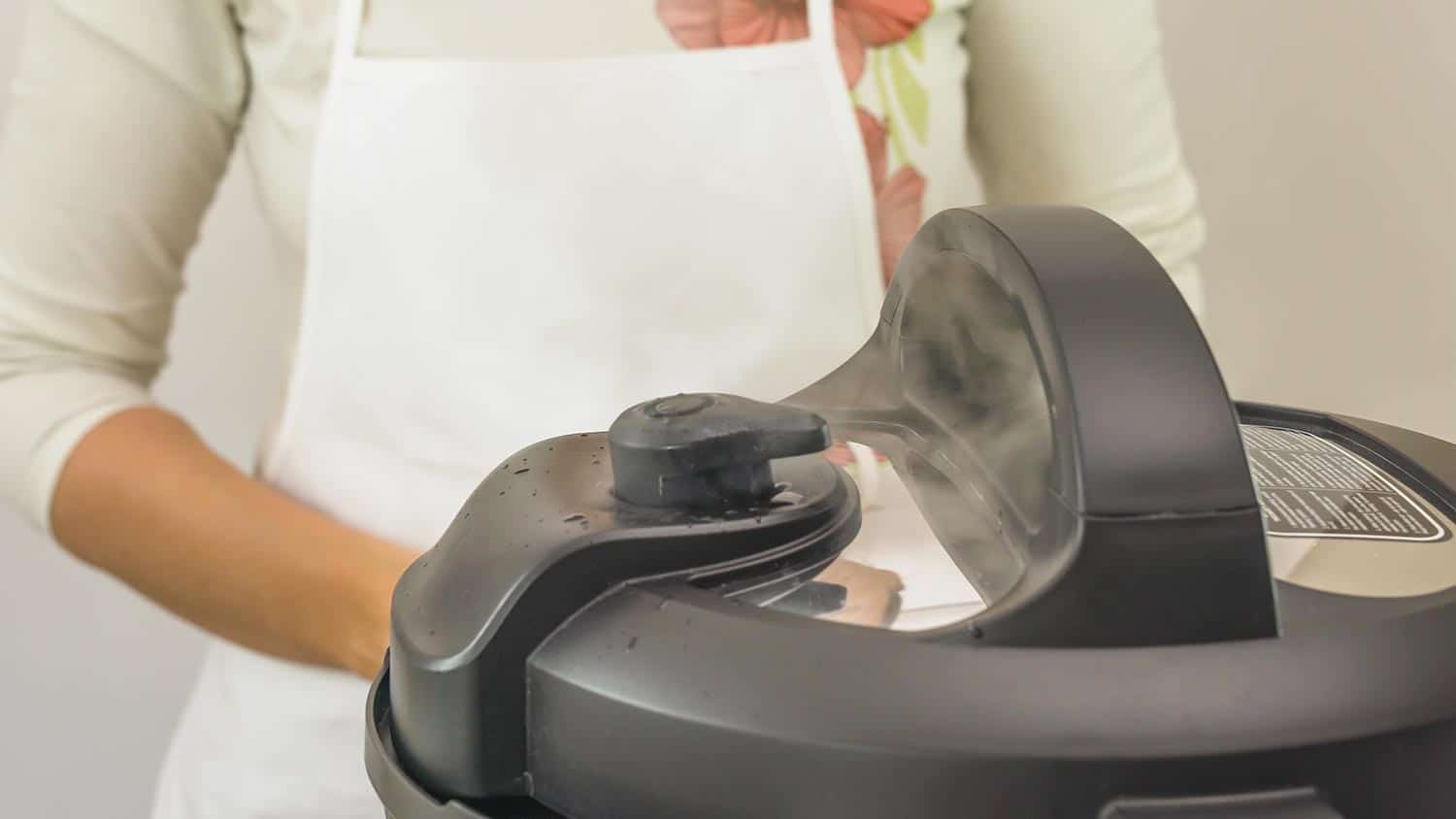 Cuisinart has two models of electric pressure cookers. The first we will go over is their 6-quart high-pressure multicooker. The model number is CPC-900.

This specific pressure cooker is one of the easier models to close. The lid won't come off because it's integrated into the pot itself. But, if you need help, there are a few ways to tell if it's closed.

Start by inspecting the machine at the front. The lid should align with the lining of the pot. If it isn't, the corners of the lid will be sticking out.

This unalignment should be the most noticeable towards the front of your pressure cooker. The corner of the lid shouldn't be sticking out. Once you lock it, the front should have a flat surface.

According to Cuisinart's manual, you will have to take the lid handle and turn it clockwise. Doing this should lock it into place. You'll know the lid is locked because a beep will accompany it. Here's a YouTube video demonstrating how to do this for visual guidance.

These two are a little tricky to understand. However, it will only take a few easy steps to get the hang of closing the lid as the two devices are very similar.

More specifically, they will have a handle with one side that overlaps the lid. This overlap should fit the indented side of your pressure cooker.

Look at the black lining of the pressure cooking system. You should see an indented side with two upward-facing triangles on opposite sides.

Try lifting the lid. It shouldn't come off at all. If everything looks correct, you can start cooking.

Cuisinart also has a 4-quart model that they no longer sell. Therefore, some might be unsure if they can follow the steps above to close their lid. Fortunately, Cuisinart still has the manual for this model online.

The instructions to lock the lid are the same. That said, you can make the control panel of the cooker face towards you. Then, line the downward-facing triangle of the lid with the upward-facing open triangle of the pot's lining.

Finally, twist the lid counterclockwise to align the downward-facing triangle with the upward-facing closed triangle.

Closing The Lid On A Stovetop Cuisinart Pressure Cooker

As far as we can tell, both lids will function the same. To close the lid, you need to familiarize yourself with some parts on top. The main point of concern would be the pressure release valve. It's a circular part with eight holes. It sits next to a small red safety valve.

You'll know it's locked into place when the locking mechanism on the side of the lid latch onto the pot. The steps above should work for both CPC22-6 and CPC22-8 models.

If you need visual guidance, here's a video from Cuisinart themselves demonstrating the locking mechanism:

How Does A Pressure Cooker Valve Work? 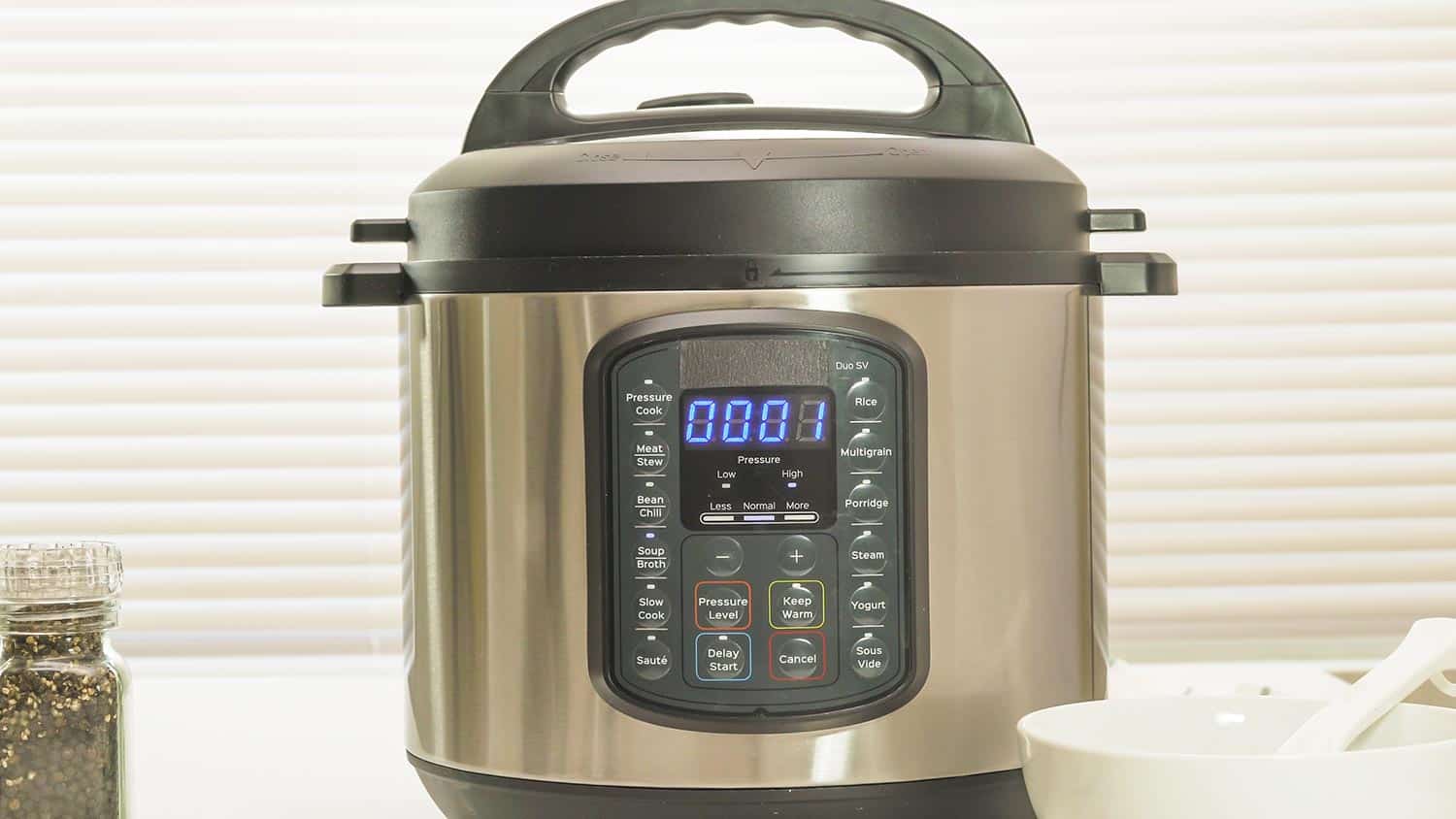 In general, a pressure cooker should have two valves. Some will refer to one as the pressure release valve. The secondary valve is known as the safety release valve.

One valve will usually be larger than the other. Let's use the Cuisinart stovetop pressure cooker as an example. One valve has eight holes. The red valve next to it will start in a downward position.

As pressure increases, there will usually be an excess amount that needs to be released. Otherwise, it will build to dangerous levels of pressure. Although some suggest the lid would pop off like a metal frisbee traveling at harmful speeds, the potential damage isn't conclusive.

At a minimum, you might have to clean up the food that would probably cover the walls and ceiling of your kitchen. Regardless, as the pressure increases, steam will come out of the pressure release valve. As you can guess, this component controls and maintains adequate pressure in the pot.

The red safety valve plays another essential role for your pressure cooker. Instead of maintaining pressure, it's an indicator that pressure is rising. At the starting point, it will remain level with the lid. As pressure builds, it will pop up.

For this reason, you'll need to refer to the user's manual of your specific pressure cooker. Various models will have parts that look different but function the same.

Why Won't The Lid On My Cuisinart Pressure Cooker Lock? 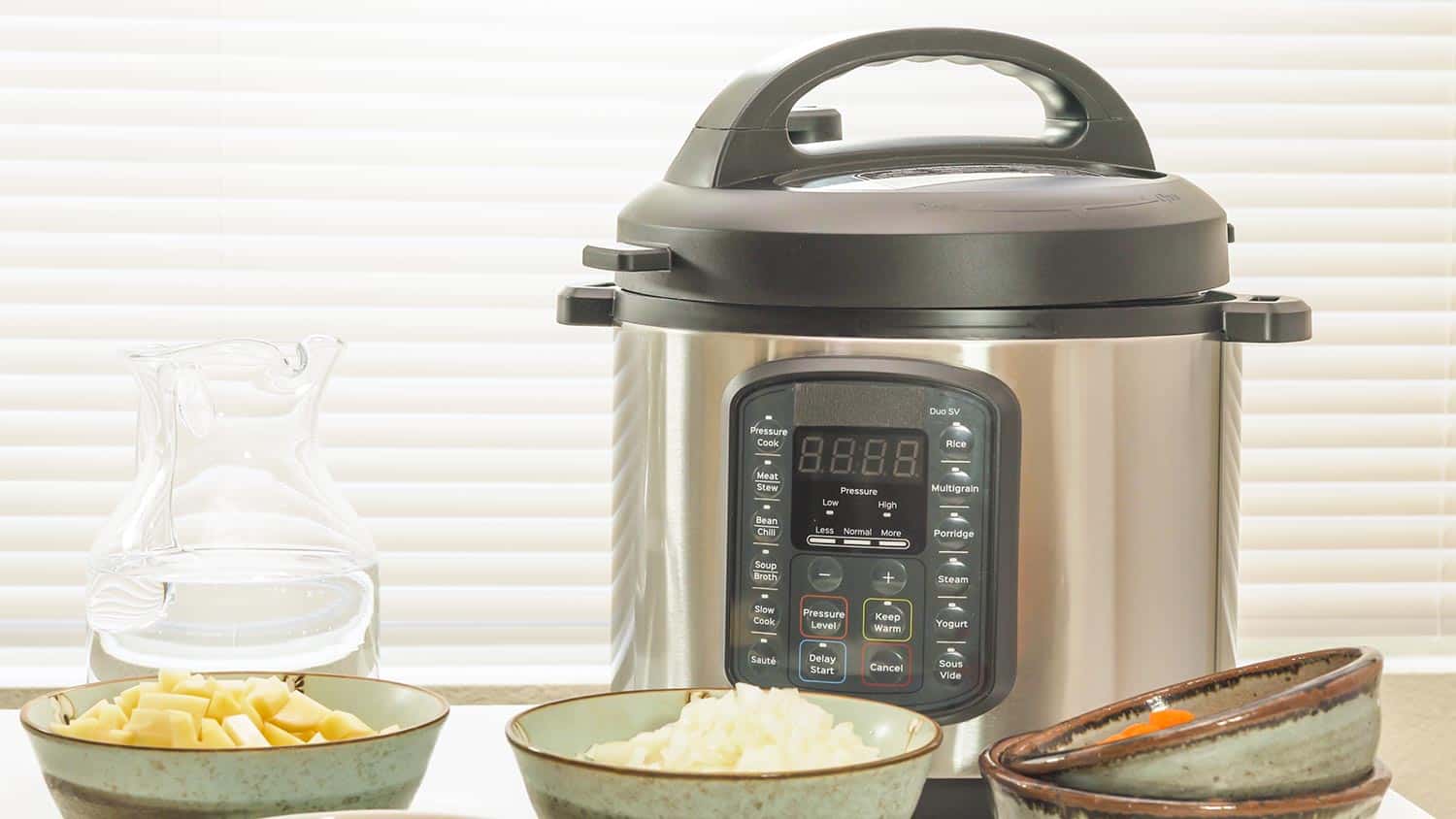 If your Cuisinart pressure cooker isn't locking, let's focus on two components in charge of that job. They are the silicone sealing gasket and the lid itself.

Start by inspecting the lid. It's a rare case, but sometimes, they can warp. So, if it shows signs of damage, you will need to contact the manufacturer for a replacement.

The second area to inspect is the silicone sealing gasket. You can find it on the inside of the lid. To remove it, you can pull out the gasket.

Regardless, if you want to lock the lid, the gasket needs to be seated properly. Press firmly on all sides to ensure it isn't loose. Food residue might be stuck in your appliance if that isn't the problem.

You'll need to clean it in the dishwasher or with warm soapy water. Once dry, firmly press it onto the lid.

How Do You Close The Lid On A Ninja Pressure Cooker?

Look around the lid until you see a downward-facing arrow. Ninja pressure cookers will have a directional pointer that accompanies them. Now, you'll need to look for the upward-facing one on the pot.

When you place the lid on the pot, make sure to align these arrows. Then, turn the lid clockwise to lock it into place. You shouldn't be able to remove it now.

For a visual demonstration, here's a YouTube video to help:

Learning to use a pressure cooker can be a complicated task. Since it's probably your first time using the pressure cooker, it can be worrying trying not to mess up. We hope you found the information above helpful!

Before you go, do you have other pressure cooker lid concerns? Do you need tips on cleaning it? To learn more, check out our post below:

How To Clean A Cuisinart Pressure Cooker Lid

Is your pressure cooker taking a long time to pressurize? We can tell you how long it generally takes! For more information, check out our post:

How Long Should A Pressure Cooker Take To Pressurize?

How Much Coffee To Put In A Percolator

Kitchen Floor Not Level – What To Do?