Spinach is a versatile vegetable that can be used in a number of recipes. However, if the recipe calls for a bunch of spinach, how much is that exactly? We did the research to bring you the answer.

A bunch may not be a commonly used measurement, but it is a term that you may see in recipes. In this article, we will take a closer look at what a bunch of spinach is. In addition, we will answer other frequently asked questions about spinach, so keep reading! 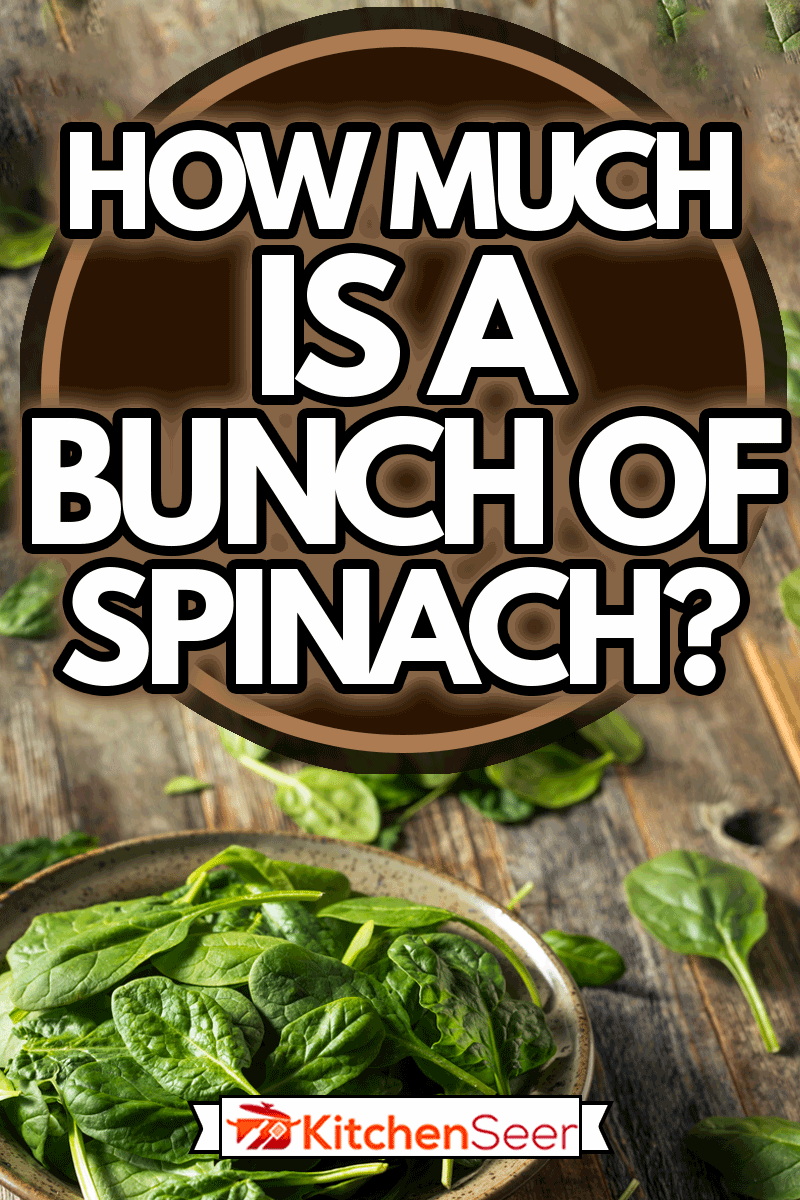 What Is A Bunch Of Spinach?

When you see a bunch of spinach called for in a recipe, you may think it is just a lot of it. However, a bunch in the culinary world is an actual measurement. It is not as common as other measurements like a cup, but some recipes still use it.

You can choose to use a food scale or not, but a bunch of spinach is about 12 ounces or 340 grams. This is without the stems being removed from the leaves. If you need to remove the stems, then it will be less than this measurement.

A lot of recipes that use a bunch of spinach will also call for other ingredients in bunches. These could include things like a bunch of kale or a bunch of collard greens.

Now that we know what a bunch of spinach is, let's look at some frequently asked questions about this leafy green vegetable. 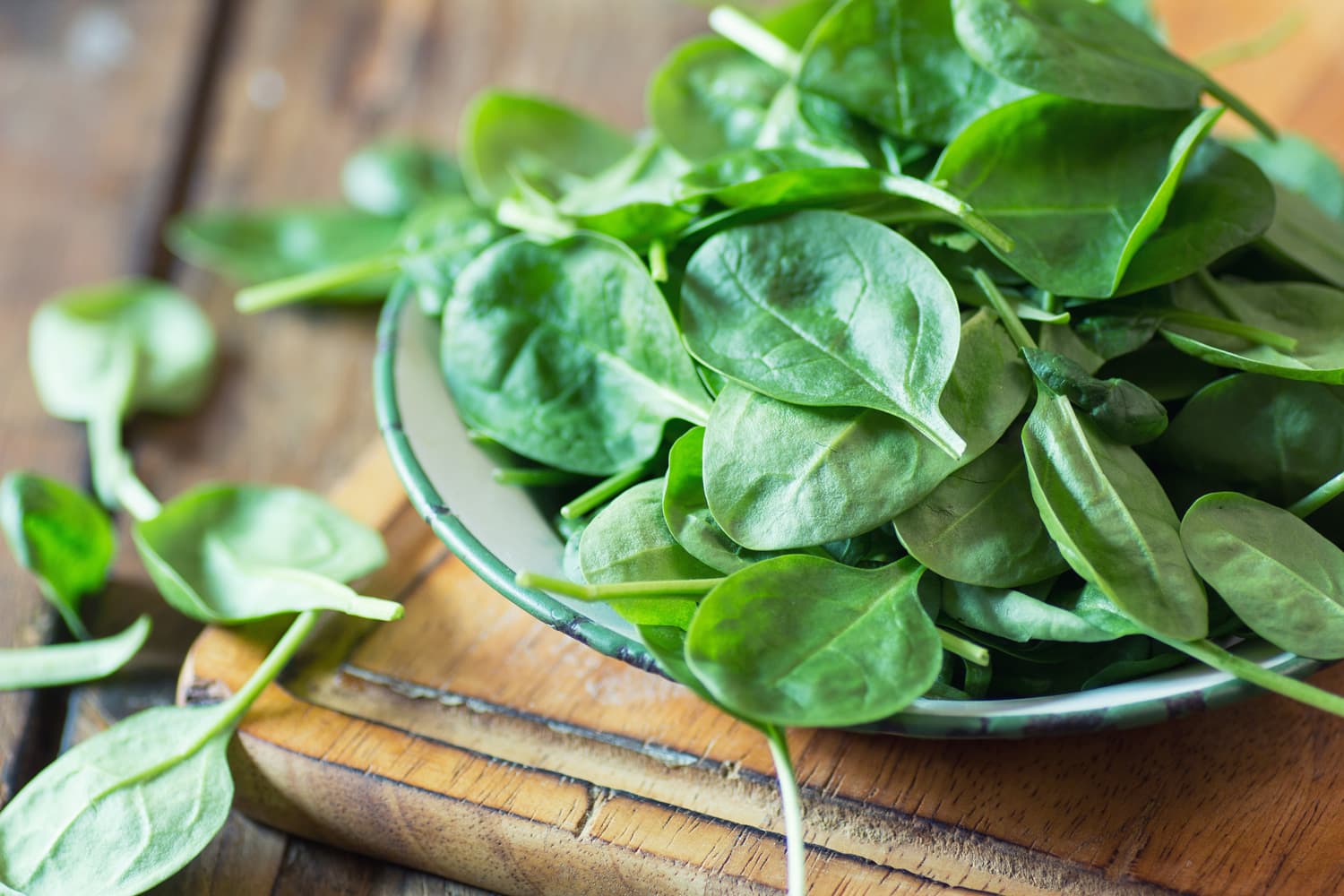 How Many Spinach Plants Are In A Bunch?

As a result, two small spinach plants may not weigh as much as one large spinach plant. That being said, a bunch of spinach is typically 12 ounces or 340 grams.

Since you can store spinach, it is better to buy a little more than you need and have some leftover than not to have enough.

What Constitutes A Bunch?

A bunch can be defined as a group of things grown together or fastened together. In the culinary world, a bunch is often used as a measurement.

A bunch of kale is another example you may see in recipes. The size of a bunch can depend on the type of ingredient and where you are getting it from. For instance, a bunch of herbs may only be 1-2 ounces.

On the other hand, a bunch of spinach is around 12 ounces, so that can be confusing. Therefore, it is best to read the recipe thoroughly before you start cooking. This way, you can make sure that you have all the ingredients and know what measurements to use. 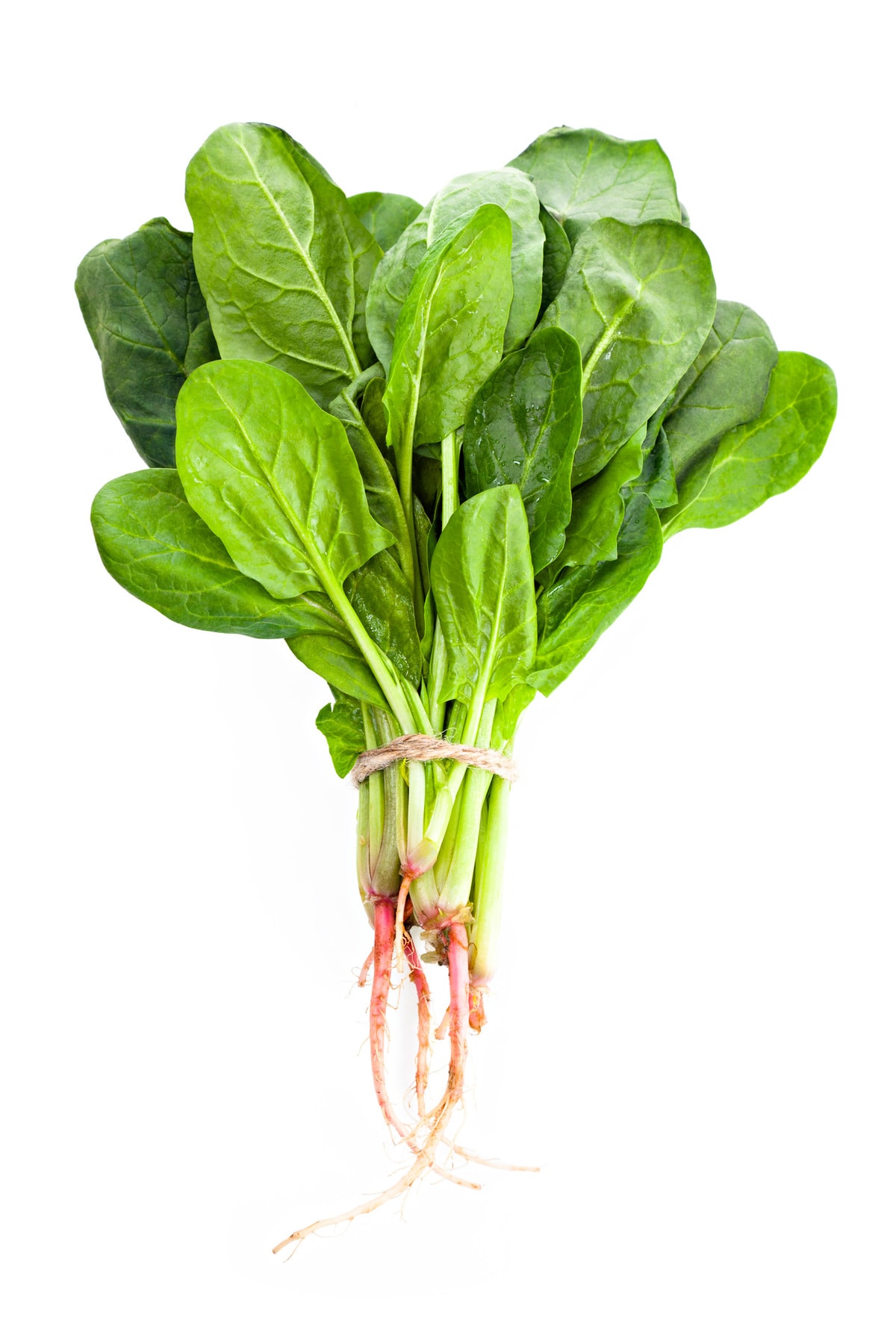 Which Part Of The Plant Is Spinach?

Technically, the leaves of the spinach plant are the part that we eat. Therefore, these leaves are what we typically think of when we think of spinach.

However, the stems of the spinach can also be eaten. These stems are often thinner and more delicate than the leaves. Therefore, you may need to cook them for a longer period of time in order to make them tender.

What Are The Benefits Of Eating Spinach?

Spinach is a nutrient-rich food that has a number of health benefits. It is low in calories but high in vitamins and minerals. Spinach is also a good source of fiber.

Eating spinach can help you increase your intake of vitamins A, C, and K. It can also help you get more folate, magnesium, and iron. These are all nutrients that are important for your health.

There are many different ways that you can incorporate spinach into your diet. For example, you can add it to smoothies, soups, salads, or even use it as a pizza topping.

How Do You Clean Spinach?

It is important to clean your spinach before you eat it. This will help to remove any dirt or bacteria that may be on the leaves.

You can wash your spinach in a sink full of cold water. Swish the leaves around, and then let them sit for a few minutes. This will allow any dirt to settle to the bottom of the sink.

After a few minutes, you can remove the spinach leaves from the water and put them in a colander. Rinse them off with cold water and then pat them dry with a paper towel.

After, try a piece of spinach, and if it has any grit on it, repeat the process. Once your spinach is clean, you can then cook it or eat it raw. Now that you know how to clean spinach, let's look at how to store it. 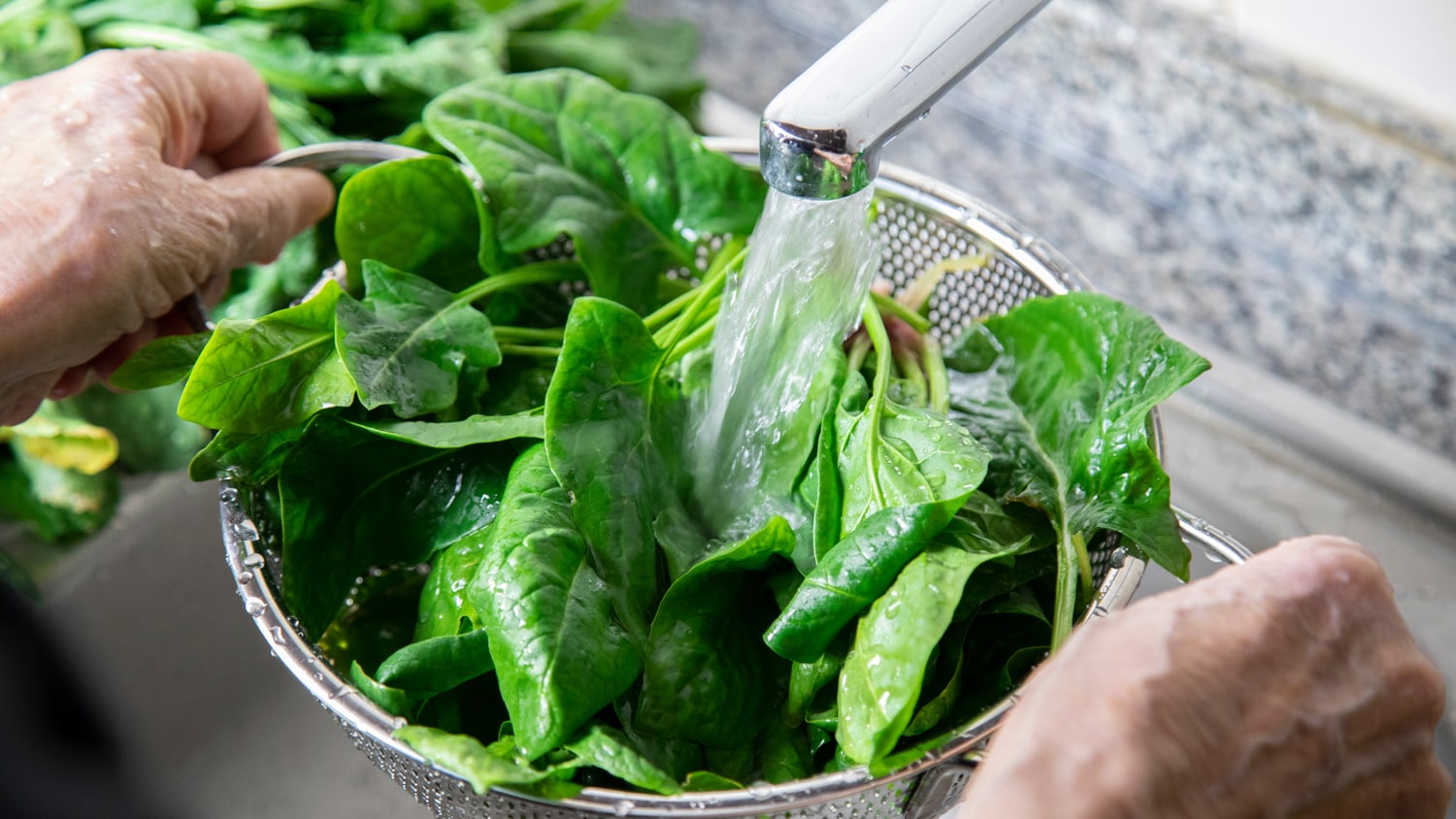 How Long Does Spinach Last?

Spinach is a perishable food and should be treated as such. Therefore, it should be stored in the refrigerator and used within a few days. However, spinach can last up to 5-7 days.

You can tell spinach has gone bad if the leaves start to turn yellow or brown. In addition, you will find that spinach will become slimy and even give off a foul smell.

To extend the shelf life of your spinach, freezing it is your best option. To do this, wash and dry the spinach leaves. Then, place them in a freezer-safe bag and remove as much air as possible. Spinach can be stored in the freezer for up to 12 months.

When you are ready to use the frozen spinach, thaw it in the refrigerator overnight. You can then use it in any recipe that calls for cooked spinach.

What Is The Best Way To Cook Spinach?

There are a number of different ways that you can cook spinach. One popular way is to sauté it. To do this, heat some olive oil in a pan over medium heat. Then, add the spinach leaves and cook for 3-5 minutes.

Another option is to steam the spinach. This can be done by placing the spinach in a steamer basket and then putting it over a pot of boiling water. Cover the pot and let the spinach steam for 3-5 minutes.

You can also cook spinach in the microwave. Simply place the spinach in a microwave-safe dish, add a little water, and then cook on high for 2-3 minutes.

Do You Have To Cook Spinach?

No, you don't have to cook spinach if you don't want to. However, if you are looking for a quick and easy way to incorporate spinach into your diet, then eating it raw is your best option.

You can add raw spinach to smoothies, salads, sandwiches, wraps, or even use it as a pizza topping. If you are going to eat raw spinach, then make sure that you wash it first. 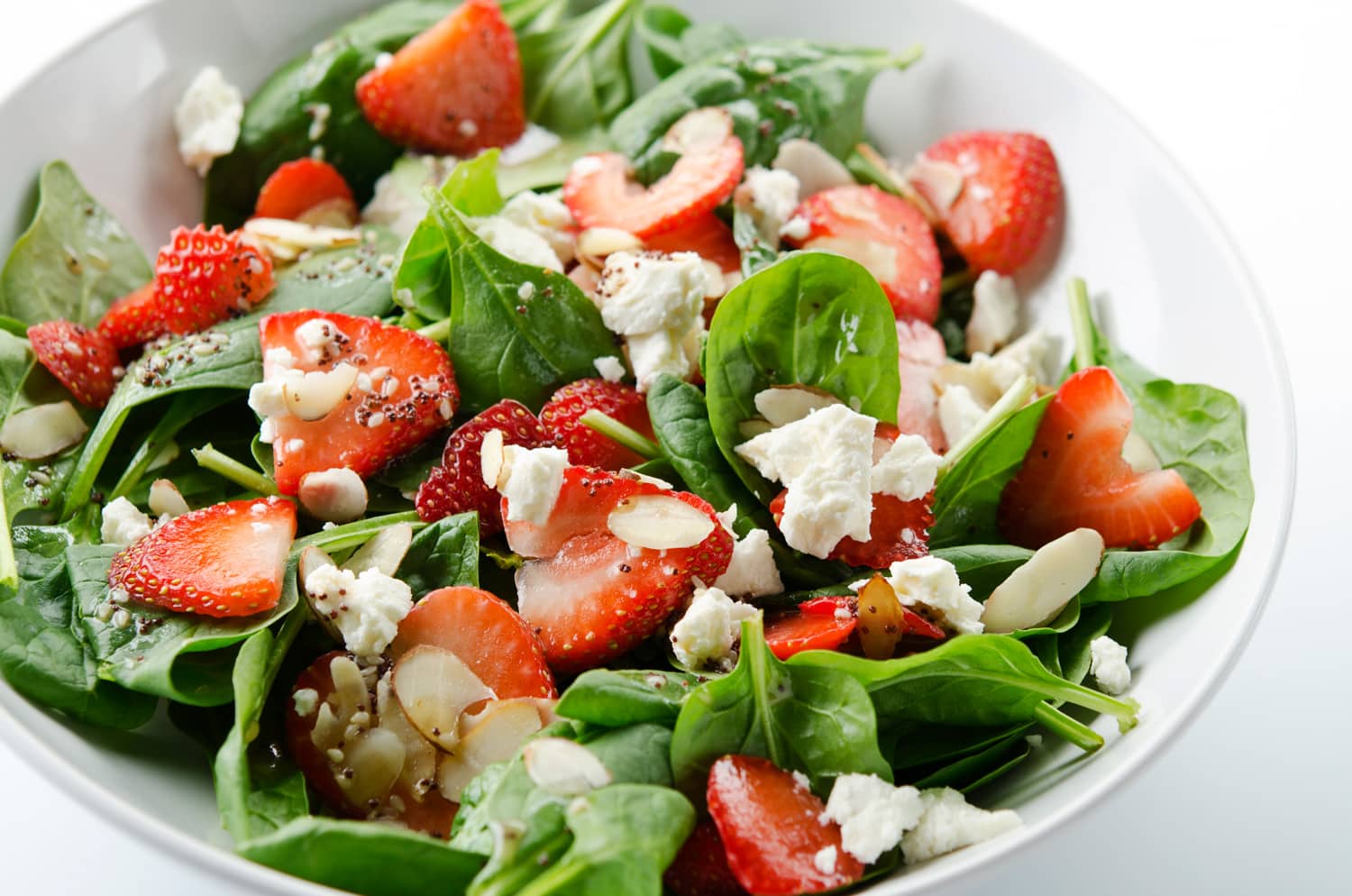 What's The Difference Between Baby Spinach And Spinach?

Another difference between the two types of spinach is that baby spinach has a slightly sweeter taste than regular spinach.

So when measuring a bunch of baby spinach, you will need more, but the weight will still be the same.

Spinach is a nutrient-rich food that has a number of health benefits. It is low in calories but high in vitamins and minerals. In addition, spinach is a good source of fiber.

So, when your recipe calls for a bunch of spinach, you'll be glad to know how much spinach that is. So now that you know how to clean, store, and cook spinach, go out and enjoy this healthy leafy green!

Before you go, be sure to take a look at these other guides:

What Vegetables Can Go In A Quiche?

How Long Do You Cook Zucchini Noodles?

How Many Apples In A Pound?

How To Cut French Fries With A Food Processor