Given the number of gadgets and appliances in the modern kitchen, it's no wonder that this one room in the house accounts for nearly eighteen percent of a home's total electrical usage. Knowing what each appliance requires for powering will help you avoid overloading your breakers and causing the loss of electrical power. Your dishwasher uses a surprising amount of power, but does this power vary from model to model? We've researched several dishwasher models to find the answer.

The average home dishwasher will use 10 amps. Ensuring that your dishwasher is on its own 15 or 20 amp circuit is necessary to avoid electrical overloading. Amp usage will vary by brand and model. Here we've listed the average amperage use by brand.

Knowing how much power your home dishwasher consumes will help you understand why appliances are on separate circuits in newly wired residences. If you live in a place that hasn't been rewired for a long time, this post will also help you understand how to avoid overloading your breaker box. We've researched how dishwashers and other kitchen appliances use power and will provide answers to other questions you may have about amperage and kitchen appliances. What if the dishwasher and refrigerator are on the same circuit? Can you plug a dishwasher into a regular outlet? Keep reading to find out! 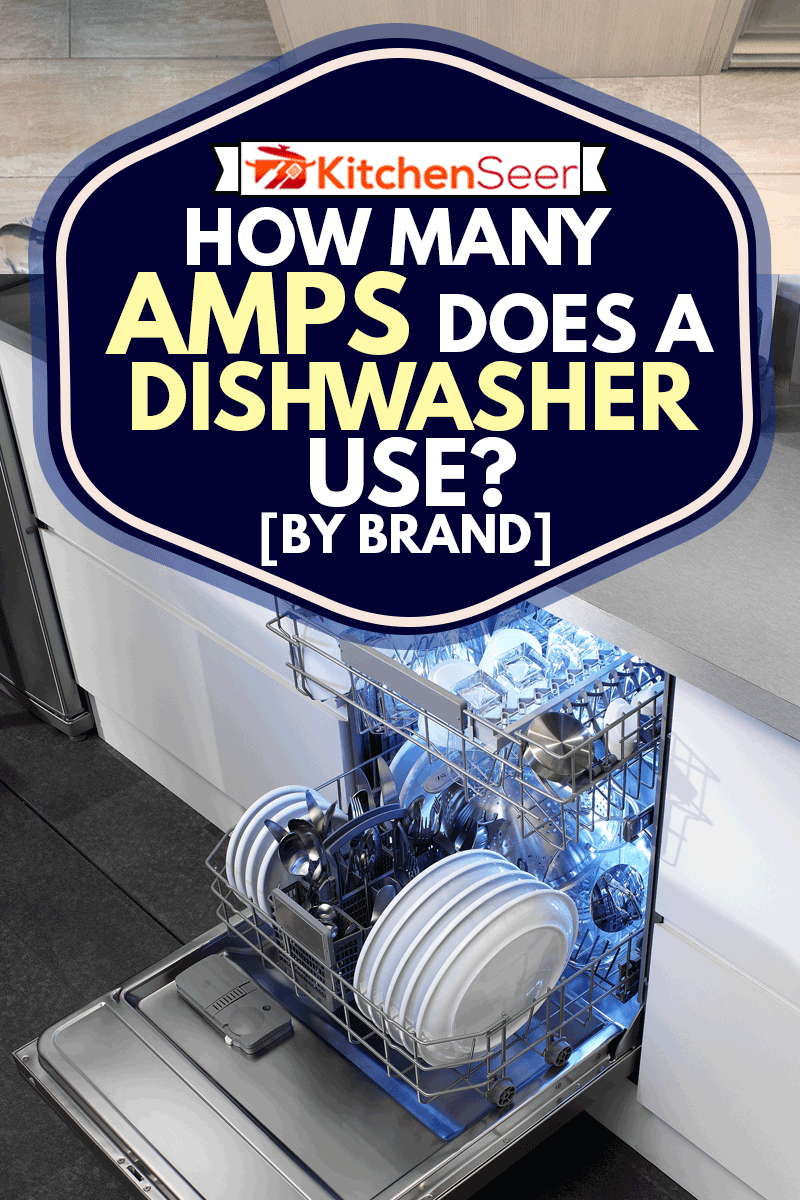 The amount of amperage a home dishwasher uses will certainly vary on the brand and model. As you can see from the list above, the amps used from popular brands fall in the range of 6.6 amps to 15 amps. No matter the brand, your dishwasher will be needing a 110 outlet unless you choose to hardwire it into the circuit. A 110 outlet will require a circuit that has a breaker rated for 15 or 20 amps. Considering that some of the dishwasher models will use 15 amps of power, you will most likely want it on a circuit that has a 20 amp breaker associated with it.

Can A Dishwasher And A Refrigerator Be On The Same Circuit?

Having a dishwasher and a refrigerator on the same electrical circuit is dangerous and shouldn't be done! Consider the amps required to power each one, then understand that the circuit breaker in your breaker box is only meant to have 15 to 20 amps running through it. The dishwasher will use, on average, ten amps, but your refrigerator will use an additional six to seven. At first glance, this seems ok, since you'd still be under the maximum by three or four, right?

You also need to account for start-up surge, which is the amount of power an electrical appliance will need during its most strenuous cycle. For a refrigerator, this amount of power can be triple it's normal use, placing it at the threshold of what the breaker will tolerate. So you can see that having both the dishwasher and the refrigerator on the same circuit will easily overload the breaker. 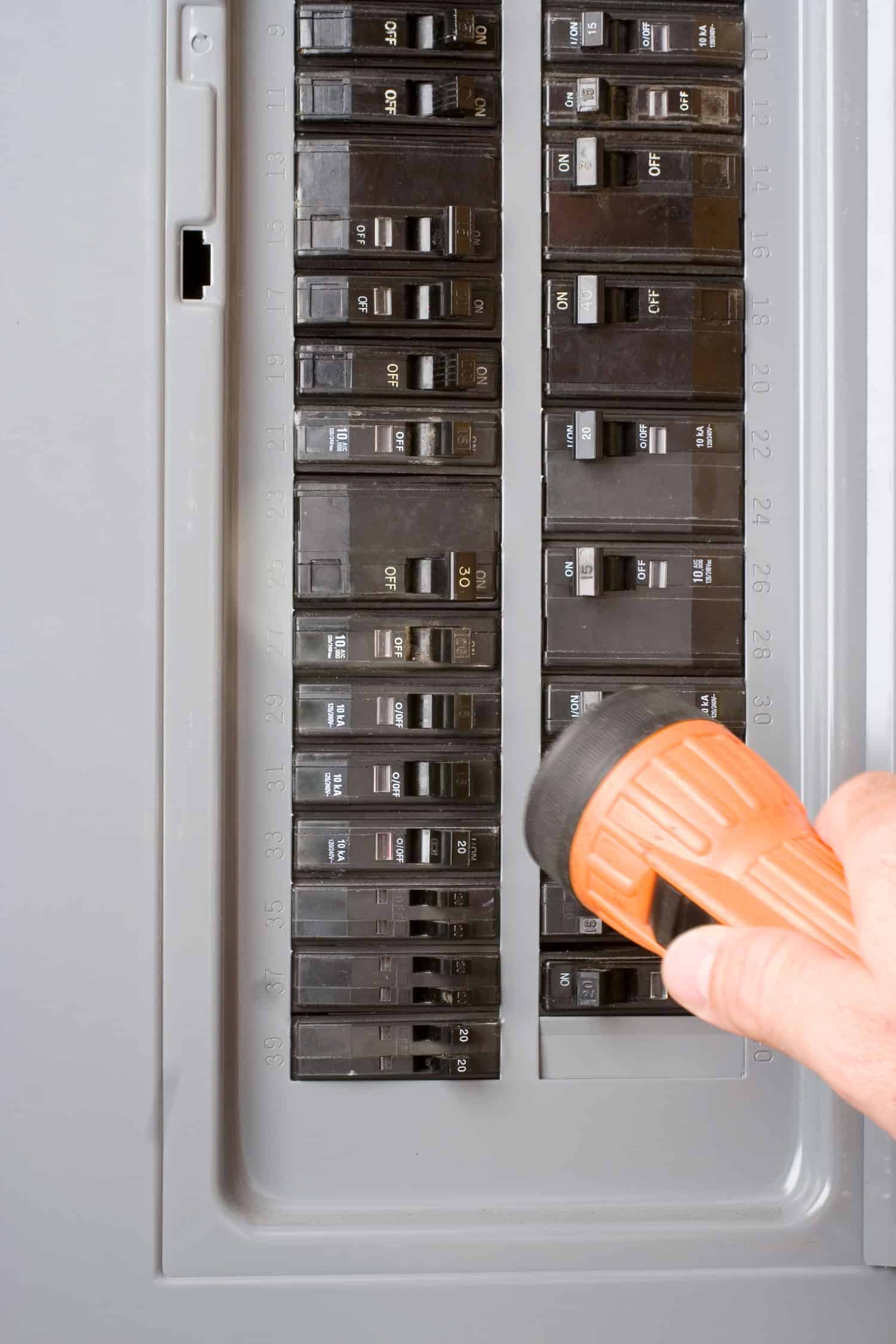 Can You Plug a Dishwasher Into A Regular Outlet?

If you don't want to hardwire your dishwasher, it's ok to plug it into a nearby outlet as long as certain conditions are met. First, it's very important that the outlet not be directly behind or in close proximity to the dishwasher. Any outlet inside the housing that holds the dishwasher shouldn't be used and should actually be disconnected. Remember that although dishwashers are built tough, leaks are always possible. You wouldn't want water to leak from seals and seep into a live electrical outlet.

Second, you'll want to locate a 120 outlet within reach of the dishwasher's pigtail cord. One located in the cabinet space next to the dishwasher's housing is the best. If there isn't one and you'd like to have one installed, that's ok. A licensed electrician can easily take care of this for you, though some areas will allow residents to handle their own internal wiring. If you decide to tackle this yourself and you've never done it before, please be thorough in your research, so you avoid serious accidents and/or fires.

Lastly, make sure that any outlet that you plug your dishwasher into is a GFCI outlet. You'll recognize these outlets by the two small reset buttons in between the plug openings. The National Electrical Code requires these types of outlets for outlets that are installed in or near damp/wet places. Places like where your dishwasher is housed. Upon contact with liquid, these outlets automatically cut power at the outlet themselves so that your breaker doesn't get flipped. This saves your wiring and your appliance from any damage. 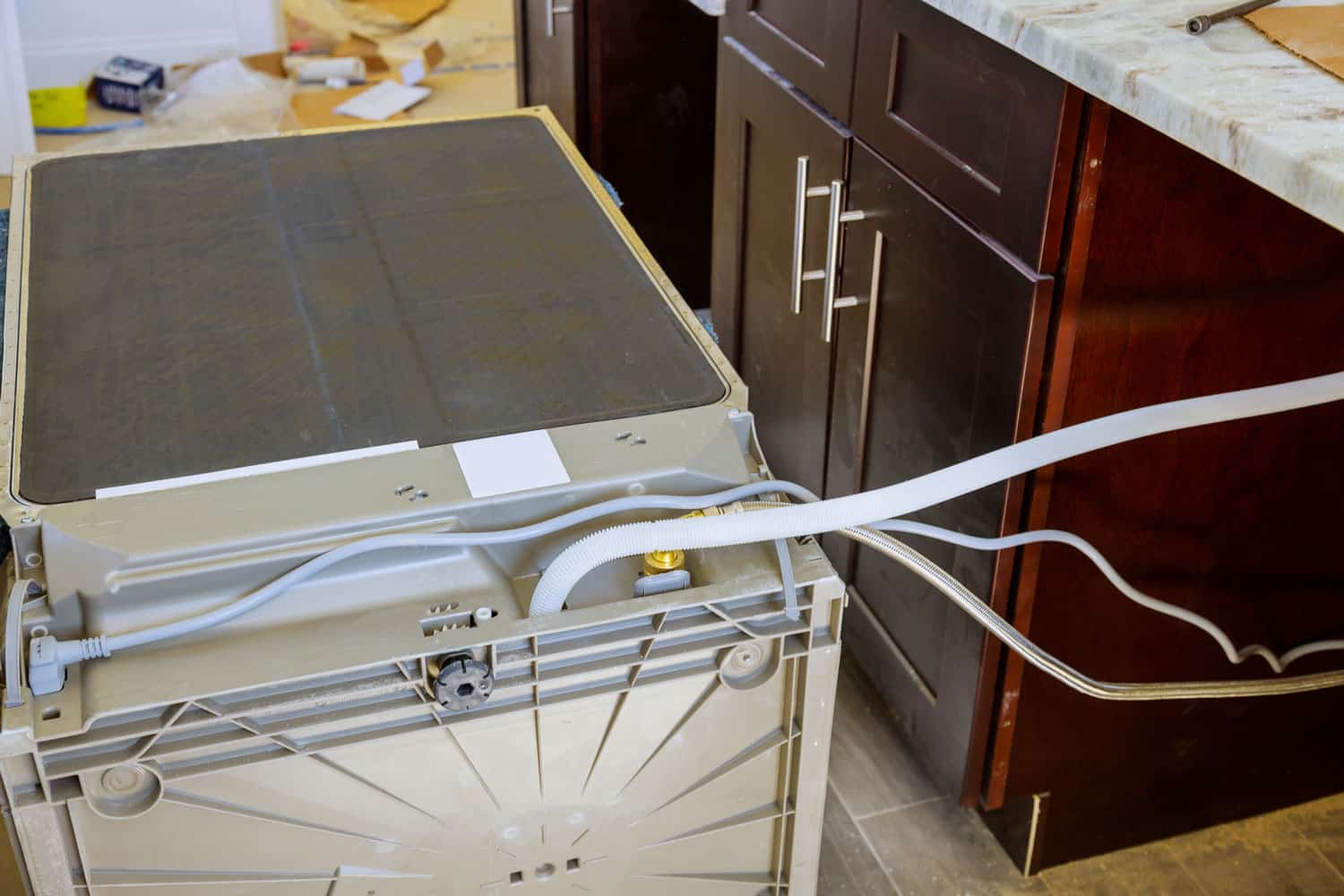 What Appliances Need Their Own Circuit?

The kitchen is the room in your house that will use the most electricity. The modern kitchen will typically come equipped with a refrigerator, stove, dishwasher, garbage disposal, trash compactor, and other smaller appliances and gadgets.

Because of the sheer amount of electricity required to power each appliance in your kitchen, they all must be on their own circuit. Breakers for 110 volt outlets are engineered to process anywhere from 15 to 20 amps without any risk. Considering that a toaster alone will account for 10 amps while it's being used, it's easy to see why it shouldn't be on the same circuit as your refrigerator, which will use around seven amps during use (but nearly triple that amount during a start-up surge).

Having all of your appliances on separate circuits conforms to the National Electrical Code and makes your home safer from power overloading and the risk of fire.

Is It Better To Hardwire Or Plug In A Dishwasher?

Whether you decide to hardwire your dishwasher into the circuit or use the pigtail electrical cord to plug it into the wall, you should be aware of the advantages and disadvantages of each.

If you select hardwiring, it's important to know that you'll never be able to pull the dishwasher out of its place any further than the cord will allow. To do so would mean shutting the power to the circuit off at the breaker box, then disconnecting the power cord from the wall to the dishwasher's rear. This usually isn't an issue since the only time someone will remove a dishwasher is when they are looking to either repair it or replace it.

But if there isn't an outlet already in place, you'll have to have one wired in. Should there be room for this, it's something that a licensed electrician can do very easily. They'll also make sure that it's up to the most recent National Electrical Code and supply you with an outlet that is GCFI. 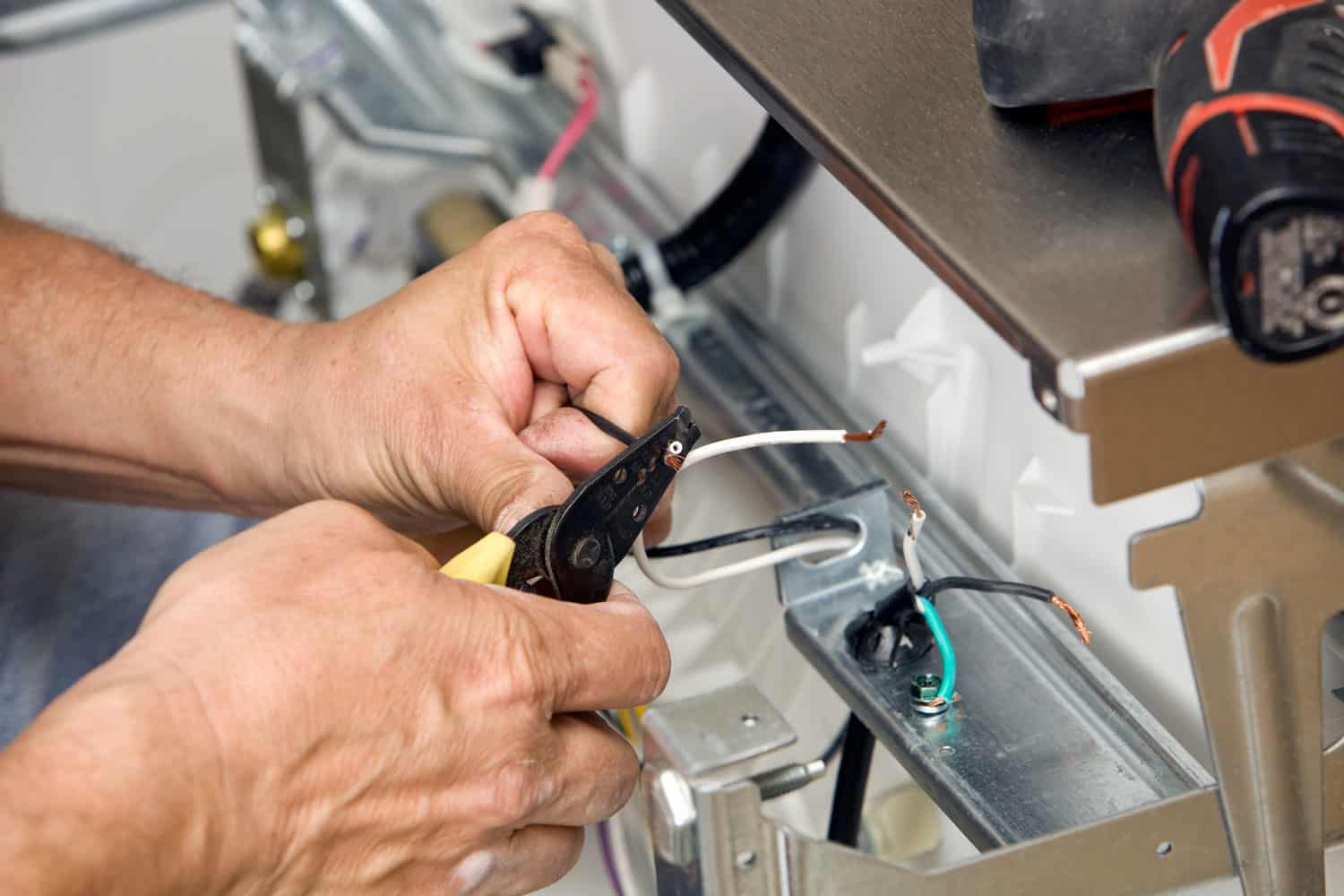 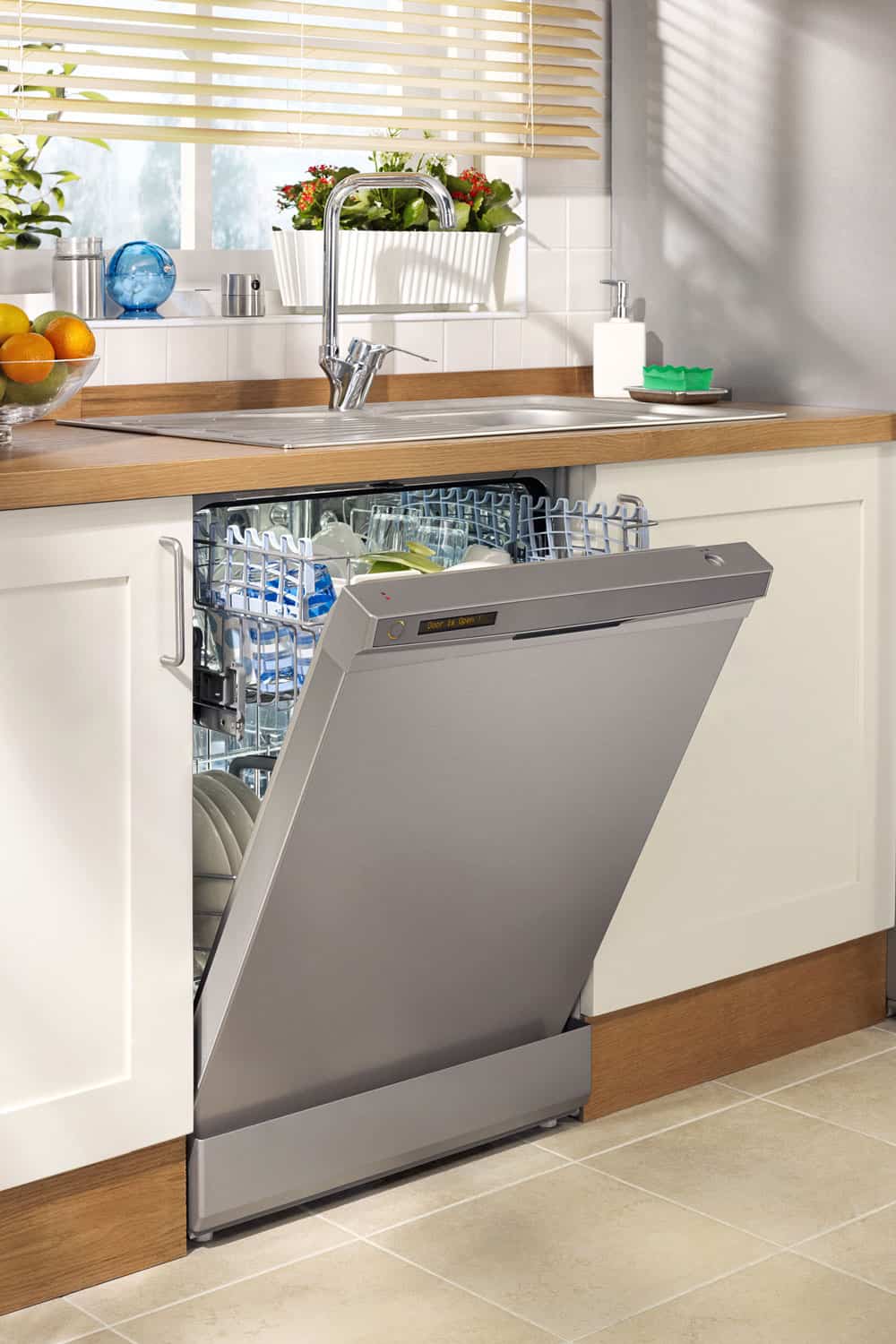 Dishwasher models have amperage that varies, but most will need about the same amount of power from your breaker box to operate. Even though their power usage will vary, it's still important that they be on their own circuit to avoid overloading. As a reminder, it's ok to hardwire your dishwasher's power supply or plug it into an outlet nearby, although hard wiring is easier if there isn't an outlet nearby. Lastly, we've learned that modern electrical codes require that all appliances in your kitchen be on their own circuit.

We hope that you found this post informative. If you would like to read more about dishwashers, you will find some helpful information in the following posts:

Are Sieves Dishwasher Safe? Here's how to clean your sieve

Are Casserole Dishes Dishwasher Safe? [Here’s Which Ones Are]

Can You Put a Pasta Maker in the Dishwasher?

Can Nutribullet Go In The Dishwasher?

Does a Kitchen Sink Need a Vent?

How To Sharpen A Pasta Machine