When you're looking for a cut of meat that's scrumptious and affordable, the humble pork chop is an excellent option. Unfortunately, they get a bad reputation for overcooking easily. How long should you cook them to avoid serving hockey pucks? We've scoured recipes and tips from top chefs. Here's what you need to know.

We'll look more at how to make the most of your porcine protein, including methods for tenderizing your chops before cooking and how to foolproof juicy chops. We'll also take a closer look at cooking times and temperatures for a number of recipes, both baked and braised. Read on to get the full story. 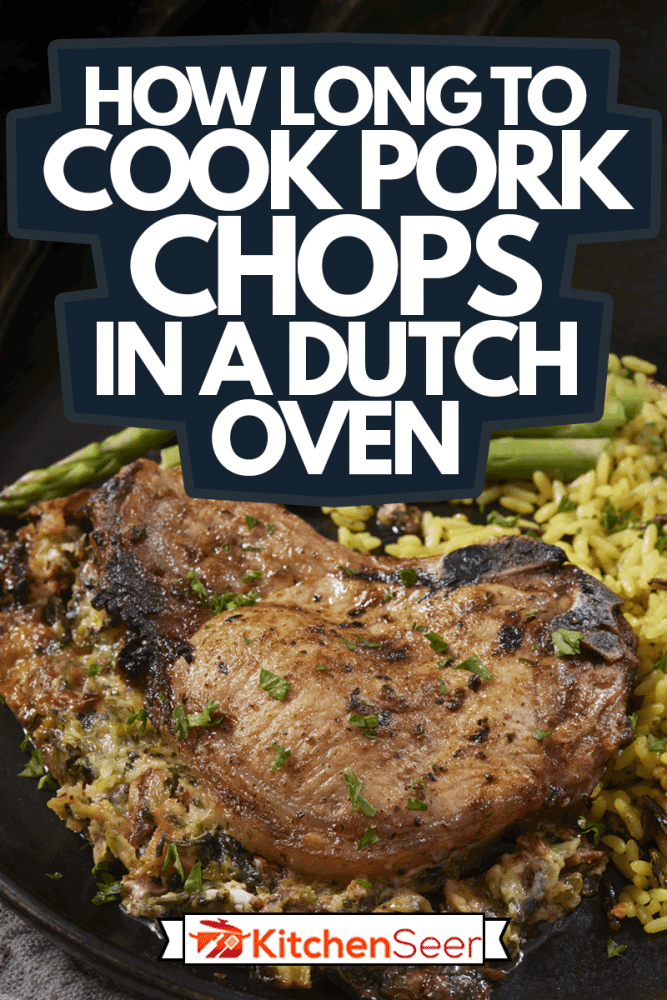 At What Temperature Do you Cook Pork Chops?

Cooking pork chops the right way for you is a balancing act between temperature, time, and the thickness of your chops. Whether your chops are bone-in or boneless can also affect the temperature and cooking time.

As a general rule, 400ºF is a good temperature for baking most pork chops in the oven. For the last few minutes of their bake, it's typical to crank the oven up to broil. Using the broiler develops a nice golden-brown crust on the outside of your chops.

An example of the 400º oven cooking method can be found in this recipe from Spend with Pennies. They bake boneless chops at 400º for 16 minutes before broiling for two to four minutes.

This temperature also works for bone-in chops. In this recipe from Kitchn, they use a skillet-to-oven method. First, they sear one side of the bone-in chops for three minutes in a blazing-hot cast-iron skillet. Then, they flip it and throw the skillet, chops and all, in a 400º oven for just six to ten minutes. 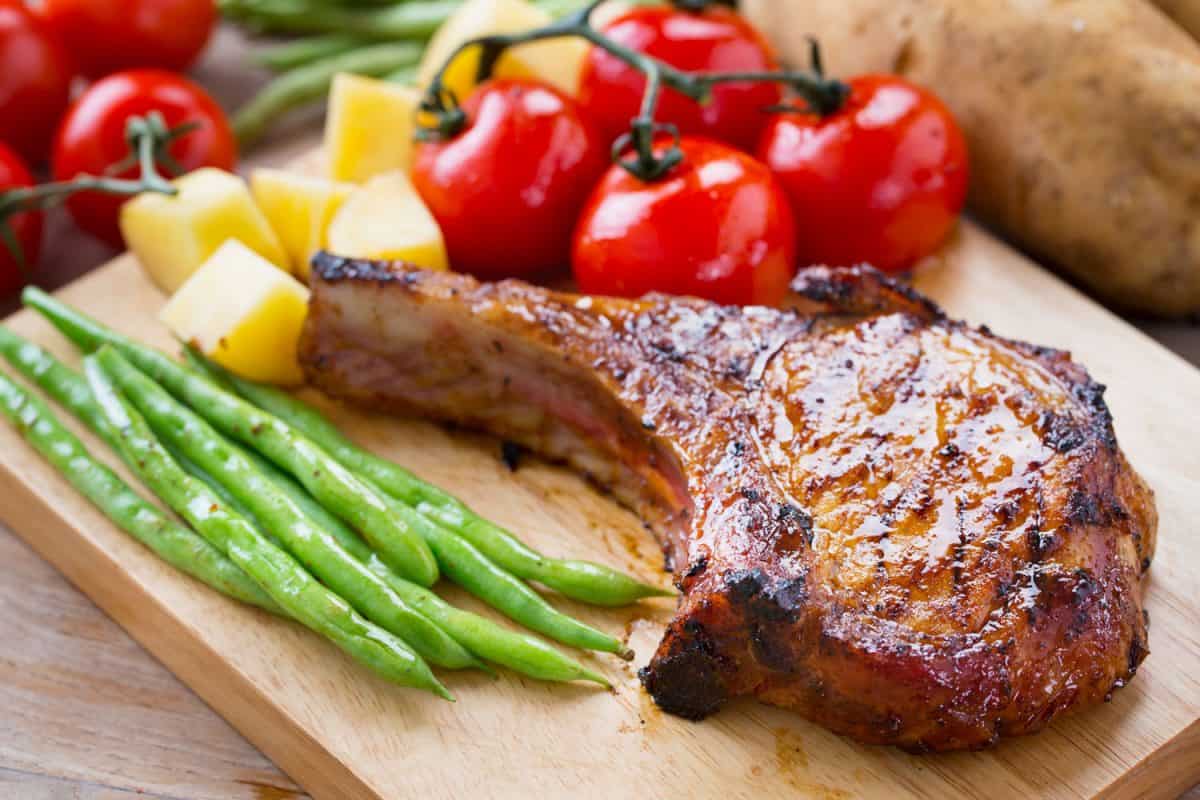 You can also bake your chops at lower temperatures, but you will need to increase the time accordingly. This recipe from Recipe Teacher uses an oven set to just 325º for bone-in chops. They are baked for 25 minutes and then broiled for five.

Always be sure to check that your pork chops reach at least 145º before serving. For the juiciest results, pull the pork chops from the oven when they reach over 140º and cover them to rest for five to fifteen minutes. As they rest, the heat will continue to distribute to the center of the chops, bringing it up to 145º.

You can learn more about temperatures for cooking and serving your pork chops in our article, "At What Temperature Should You Cook Pork Chops?"

Is it Better to Cook Pork Chops Covered or Uncovered? 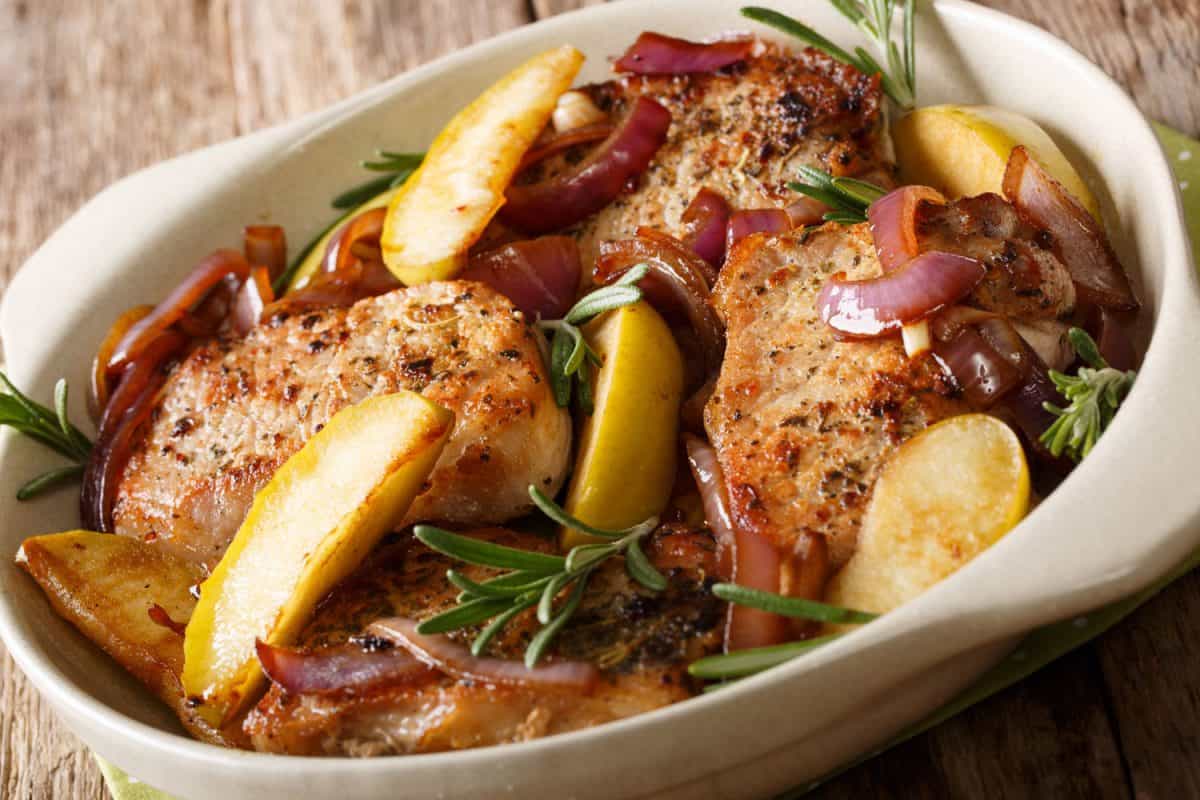 Most recipes call for cooking pork chops uncovered unless you are braising them. While covering your chops in foil can help prevent them from drying out, it also makes it harder to develop that golden-brown crust. A crustless pork chop may seem grey and one-dimensional.

However, dutch ovens are great options for braising your pork chops. The high sides and lids are perfect for cooking pork chops or other cuts of meat in a flavorful liquid, and this is when you'll want to cover your chops.

How Do you Tenderize Pork Chops Before Baking?

Pork chops have a reputation for being a bit tougher than most cuts of beef steak. And it's true. Pork chops are leaner and more muscular than sirloin or filet mignon, which is why many cooks prefer to tenderize their pork chops before cooking them.

Pork chops owe their propensity for toughness, in part, to long muscle fibers and connective tissues. Methods for tenderizing pork chops damage these fibers, breaking them up into smaller, more luscious dimensions.

This can be accomplished in a few ways. The most common methods to tenderize pork chops and other cuts of meat are using a meat mallet, marinating in an acidic liquid, or applying a meat tenderizer.

A meat mallet is one of the standard options for tenderizing meat. These tools are like a hammer, but they usually have one flat head and one covered in short spikes. By hammering the meat firmly, you will make your pork chop thinner and also more tender.

Click here to see this meat mallet on Amazon.

If you don't have a meat mallet, you can get similar results using cling film and a heavy pan, like in the video below.

Marinating is a great way to boost the flavor of your pork chops, but it can also aid in tenderizing them. The key to a tenderizing marinade is to include ingredients that will break down some of the fibrous tissue in the chops.

Acidic ingredients can do the trick. Often marinades will include lemon juice, vinegar, or buttermilk for both their flavor and the tenderizing effects of these acidic liquids.

Some ingredients also have enzymes that break down proteins into amino acids. These enzymes can be found in a number of fruits, such as pineapples, papayas, and mangoes.

When using these kinds of marinades, timing is key. If you marinade them for too long, they may go from tender to mushy. Typically six to twelve hours is considered the ideal time for marinating pork chops.

There are also commercial meat tenderizers available for purchase. They are often powders or liquids that contain the same enzymes found in fruit that break down protein.

Click here to see this Adolph's meat tenderizer on Amazon.

How Do you Prevent Pork Chops from Drying Out? 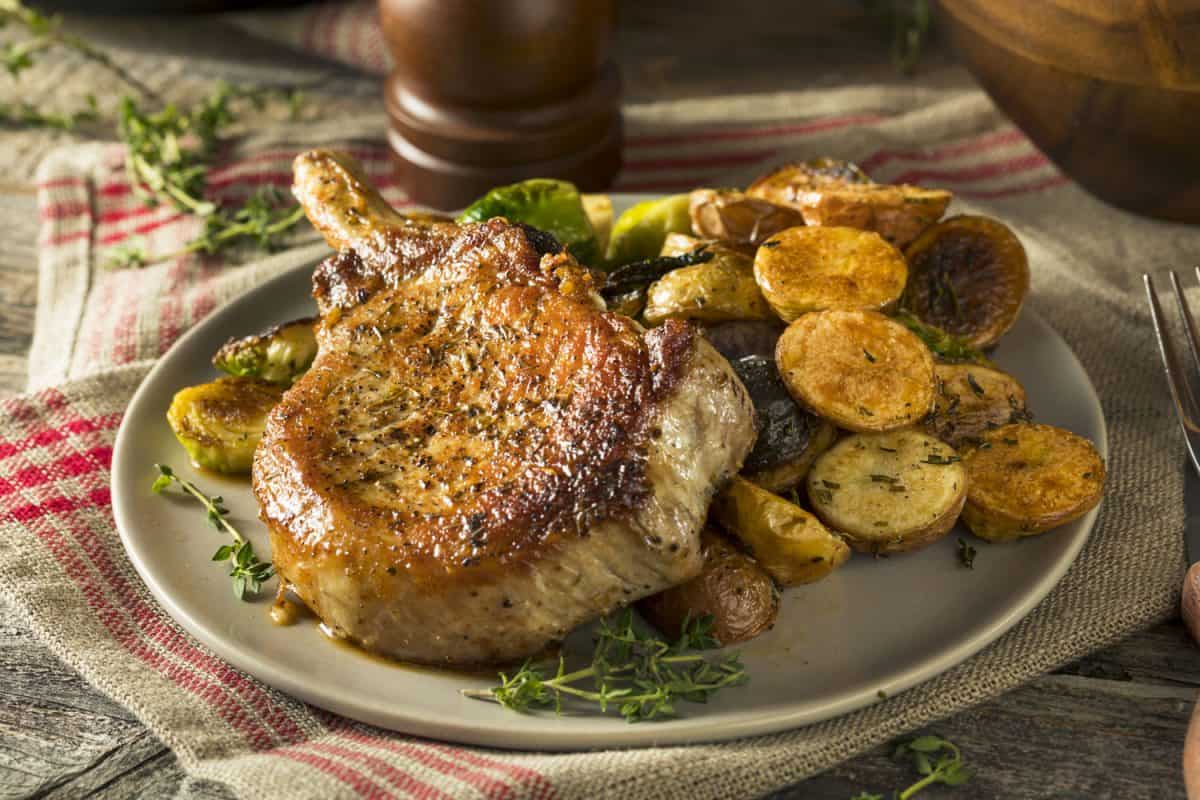 When people think of dry meat, pork chops rank up there among the white meat from the Thanksgiving turkey. But this doesn't have to be the case.

The key to keeping your pork chops moist? Don't overcook them. Of course, this is easier said than done. It's not easy to judge the doneness of your pork chops just by eye and intuition. Your best bet is to use a meat thermometer.

For pork, you want the meat to be at least 145º in the center of the thickest portion. But remember! That temperature will continue to rise after pulling your chops from the oven. Pull your pork chops once they are over 140º, then cover them and let them rest. They will come up to temperature during this resting period.

How to brine pork chops

Cooking to the right temperature and resting your chops go a long way in fending off dryness. But if you're looking for some extra insurance as well as a great way to up your porks flavor, you should try a brine.

A brine is similar to a marinade but with some key differences. While marinades tend to bring a lot of extra flavors and some acidic ingredients, a brine can be made of just salt and water.

As the meat absorbs salt from the brine, it will be able to retain more water. Not only does this work as a safeguard against drying out, but it also seasons the meat below the surface. The salt can also help tenderize the meat by unraveling some of the protein structures.

To make a brine, simply dissolve salt in warm water, let the water cool, and submerge your pork chops in the brine for several hours, preferably overnight. You'll want to use about 1/4 cup of kosher salt for every four cups of water.

Of course, you can also add in extra flavors to your brine as well. You can see how to make a brine and get some inspiration for additional flavors in the video below.

What are Some of the Best Ways to Cook Pork Chops in a Dutch oven?

Dutch ovens are great multi-functional pots. You can use a dutch oven instead of a cast-iron skillet to sear and bake your pork chops, but where dutch ovens really shine is braising.

Braising involves cooking your chops in a small amount of flavorful liquid. It takes more time and lower temperatures than baking. This recipe from Taste of Home starts by searing the chops in a dutch oven, then braising them in carrots and chicken stock at 325º for 1.5 to two hours.

In this one-pot recipe from Cook at Home Mom, pork chops, potatoes, apples, and sauerkraut all cook together in the dutch oven for a classic German meal.

Of course, pork chops aren't the only Dutch oven-ready dish. Check out our article, "What Should You Cook in a Dutch Oven?" for more great recipes and inspiration. 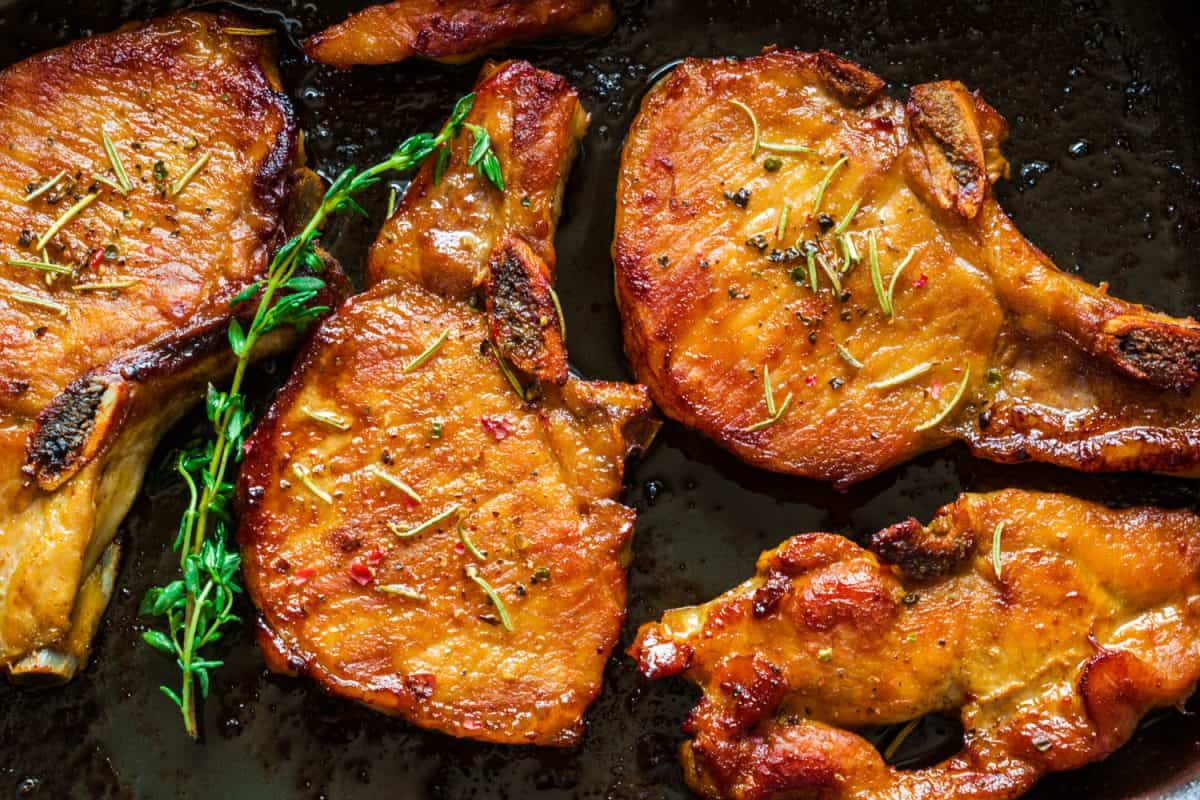 Perfectly cooked pork chops aren't just an affordable protein to make the main dish of your next meal; they can be every bit as savory, scrumptious, and tender as more expensive cuts of meat.

Now that you know more about how to keep your chops moist and tender, the only thing left to do is get cooking and dig in. Happy cooking!

Do You Need To Flip Chicken In The Oven?

How To Keep Hamburgers From Falling Apart