Even if you’re not a Buffalonian, you probably know that frying is the “authentic” way to prepare chicken wings. However, it’s way simpler, cleaner, and (somewhat) healthier for most home chefs to bake chicken wings in the oven. If you’re going to give baked chicken wings a go, then you’re probably wondering how long to keep them in the oven. Don’t fret; we’ve done all the research on how long to bake a batch of delicious wings at the perfect temperature.

Most recipes recommend cooking chicken wings for 45 minutes to one hour in a 400° F - 425° F oven. Convection ovens will require less time than non-convection models.

According to the USDA, chicken wings should have an internal temperature of 165° F before serving. You should also notice your chicken wings have a golden sheen and a slightly crispy texture when they’re done. 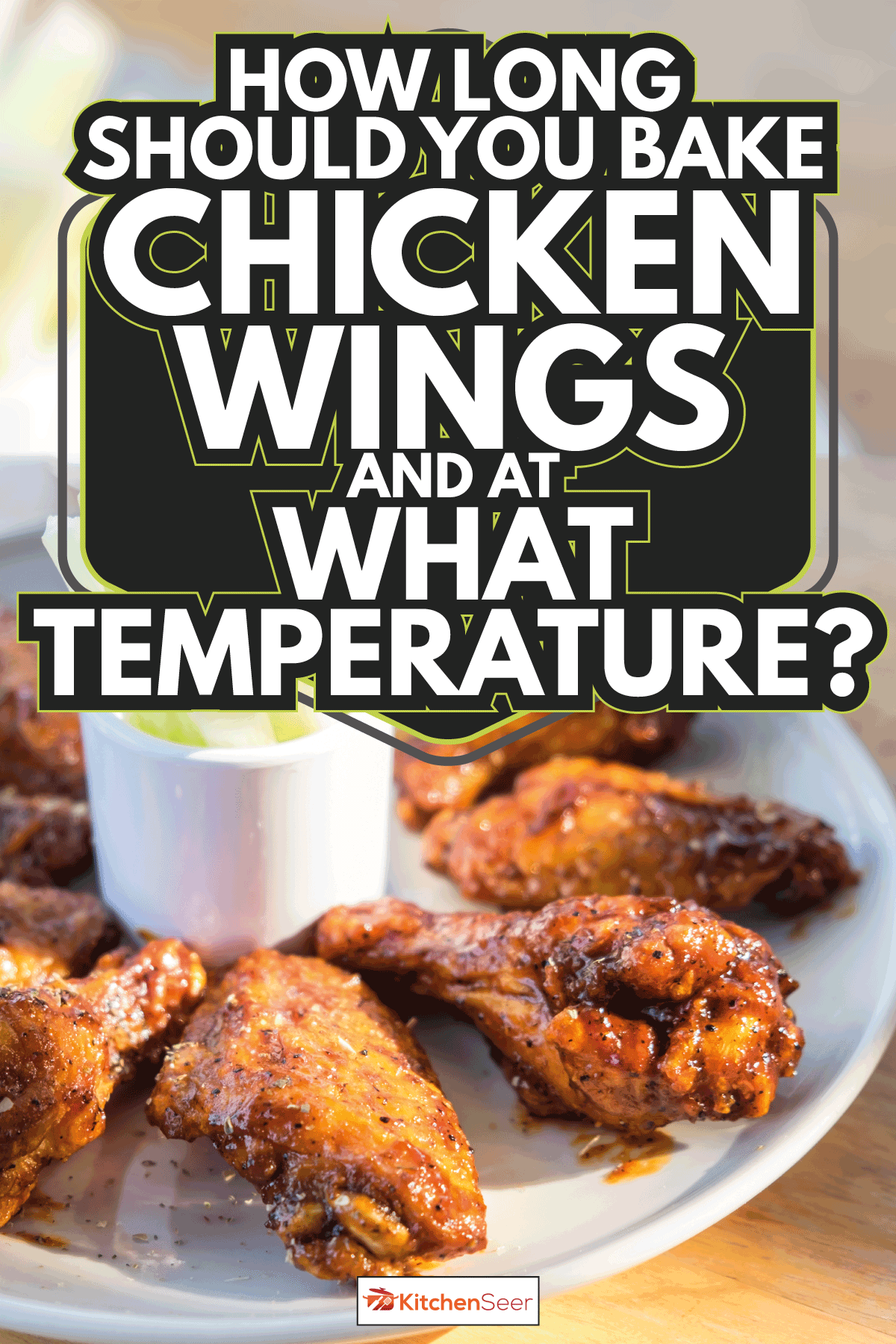 What’s The Best Time And Temperature For Baking Chicken Wings?

Every chicken wing recipe has slightly different temperature and time recommendations. Therefore, you must take your recipe’s instructions into account and tailor them to your oven’s heating style.

That being said, most baked chicken wing recipes say you should set your oven for 400° F - 425° F. Keep your wings in the oven for at least 45 minutes. 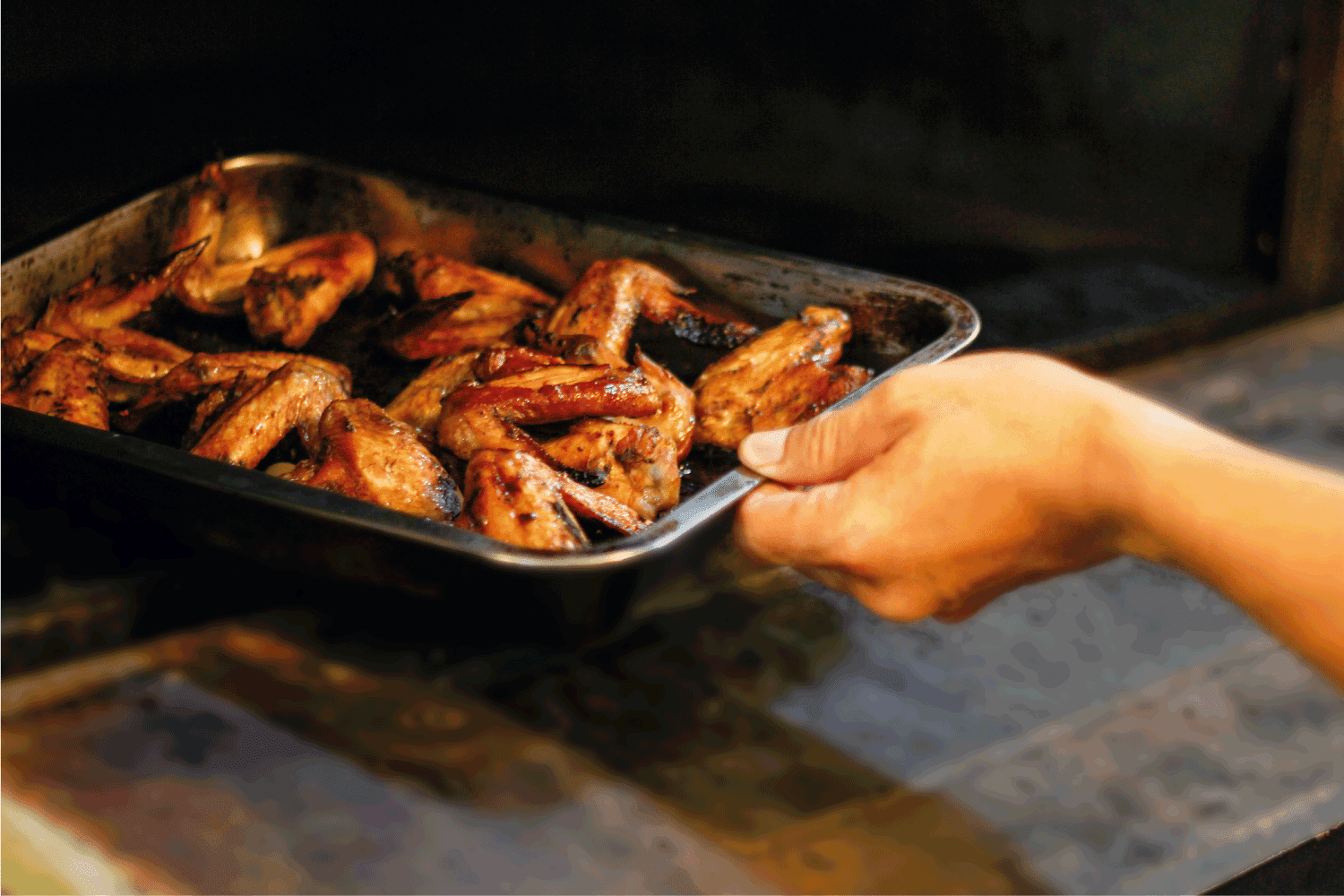 However, you may need to up this time to one hour. For even browning, be sure to turn your chicken wings in the middle of your cooking.

If you want to learn more about baking in convection ovens, be sure to read this post: Do Convection Ovens Cook And Bake Faster?

For a beginner’s guide on how to bake chicken wings, check out this YouTube video:

How Can You Tell If Chicken Is Undercooked?

The best way to tell if your chicken is undercooked is to use a digital meat thermometer. Put the tip of your device in the fattest part of a few wings and check out the internal temperature.

The USDA recommends chicken should reach an internal temp of 165° F before consuming.

Click here to see this meat thermometer on Amazon.

While it’s not as accurate, you could also judge a chicken’s doneness by looking at the color. Raw chicken has a pinkish hue, which gradually changes to white and brown as it cooks through.

You could cut into a chicken wing to double-check there are no raw pink bits left in your chicken.

What Is The Minimum Internal Cooking Temperature For Chicken Wings?

The USDA is crystal clear about the safe internal temp for chicken wings: 165° F. FYI, this temperature is valid for all poultry meats.

If you’re not used to checking a food’s temperature with a meat thermometer, watch this educational primer from Penn State:

When Should You Put Sauce On Baked Chicken Wings?

Traditionally, you should toss your wings in sauce after they’re done baking. Baked chicken has a crispier skin, which makes it easier for all of that delicious sauce to “cling to your wing.”

However, that doesn’t mean you can’t bake pre-marinated wings. Indeed, plenty of recipes use teriyaki, chili garlic, or honey garlic to great effect. While these methods are super tasty, they aren’t the “traditional” technique. 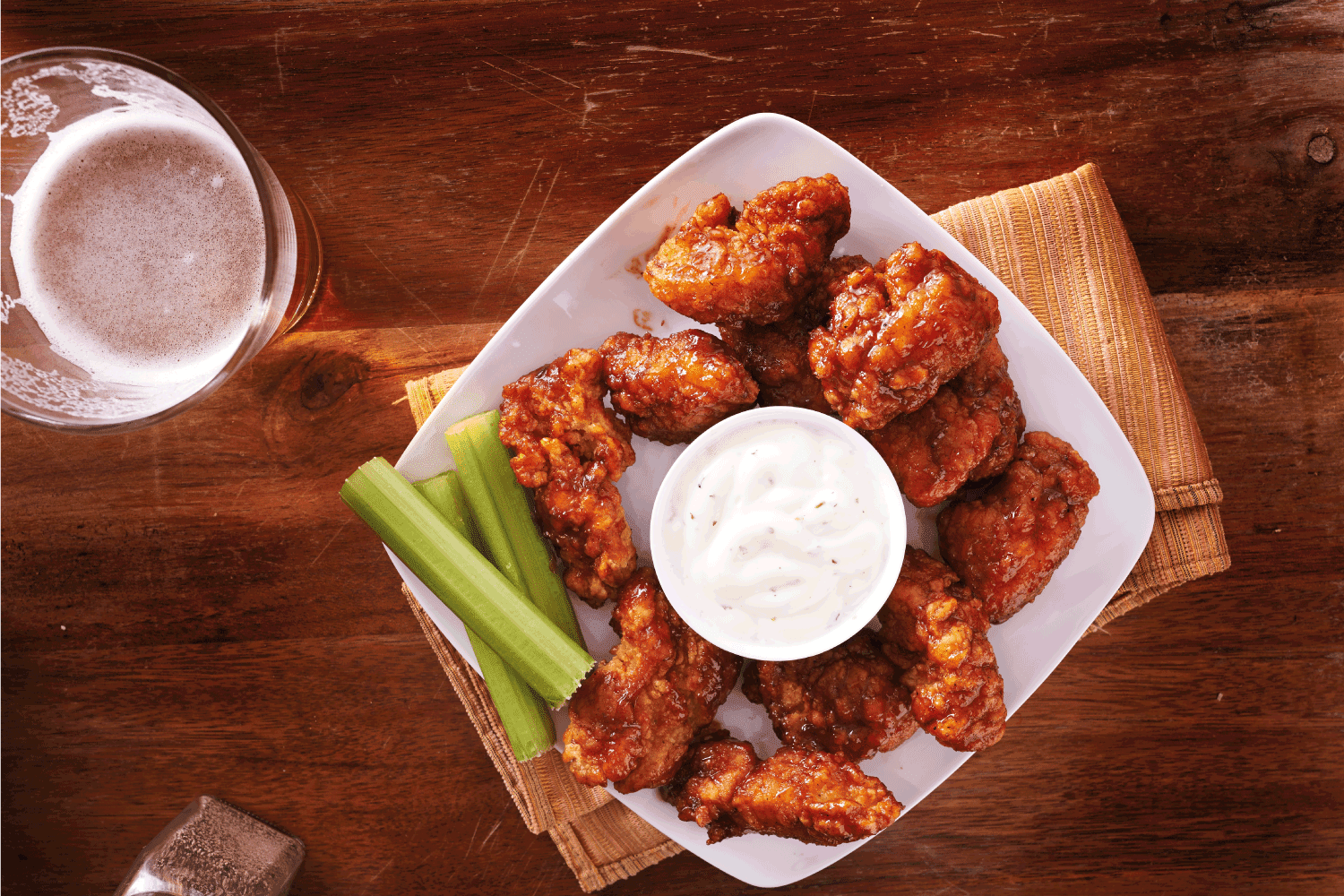 Is It Better to Fry Or Bake Chicken Wings?

A chicken wing fanatic will always claim frying is better than baking. While frying is the “original” cooking method, that doesn’t mean it’s “optimal” for every home chef.

The main advantage of frying chicken wings is it’s easier to create a crispy outer coating, even without batter. Also, it takes far less time to fry chicken wings than to bake them in an oven.

Oven-baked wings may not be as deliciously crispy as fried wings, but they are also safer for home chefs who don’t want to deal with a pot of boiling oil. 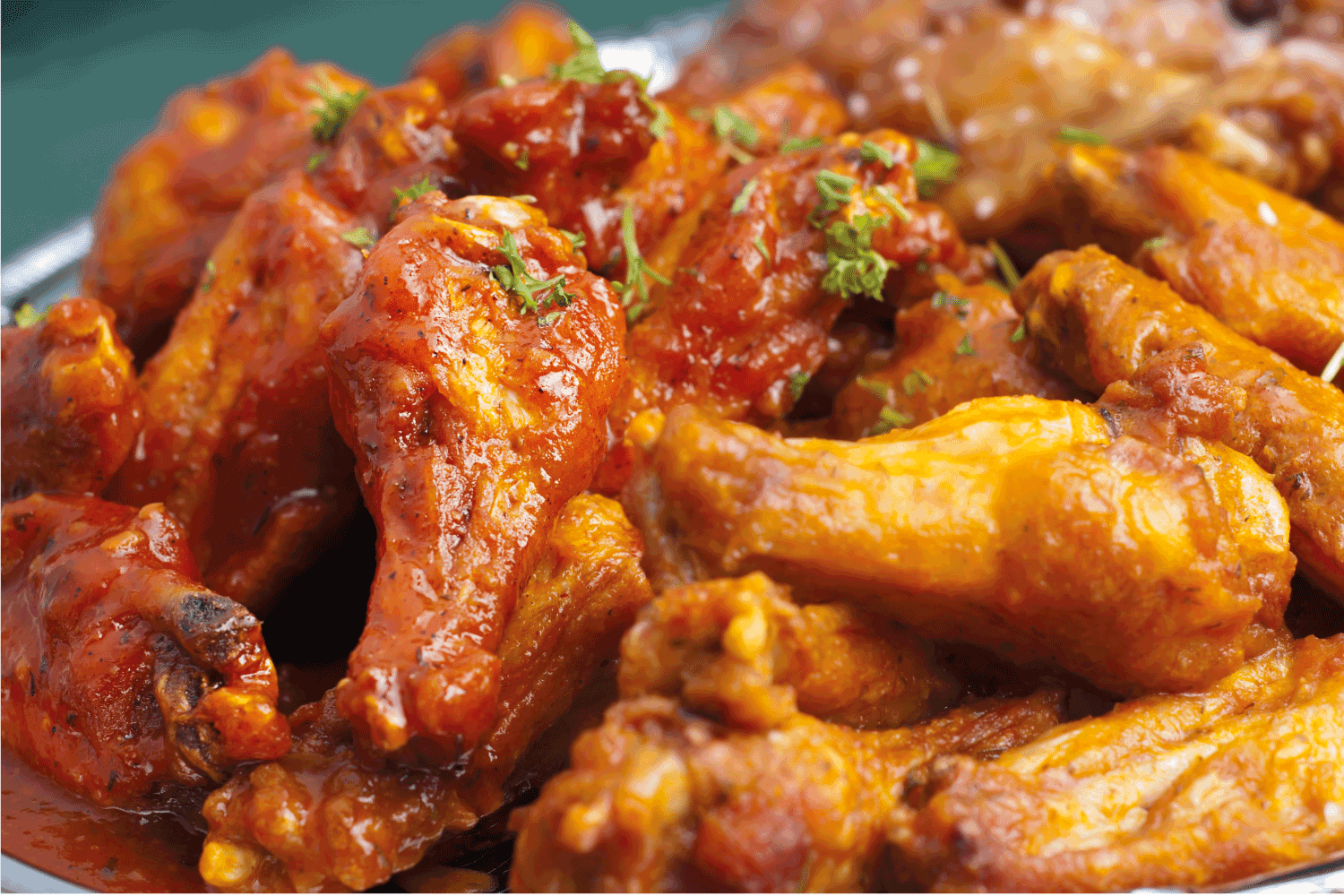 For most people, baking chicken wings is the more convenient option. Not only is it easier to cook chicken wings in the oven, but it’s also way less messy to clean up.

As a bonus, baking is healthier than frying. While wings are far from a “superfood,” you should feel a little less guilty about eating this “guilty pleasure!”

Deciding whether to fry or bake your chicken wings depends on many factors, including your health goals and tastes. Also, you should feel comfortable using and disposing of a vat of hot cooking oil.

Click here to see this deep fryer on Amazon.

If you’d like to give deep frying a try, then you may want to check out this post: Top 10 Deep Fryers At Walmart

What Does Baking Powder Do On Chicken Wings?

Baking powder is the “secret ingredient” in most baked chicken wing recipes. Why? Well, baking powder contains baking soda, which is an alkaline ingredient. Adding some of this alkalinity to baked goods (or chicken wings!) helps improve browning. 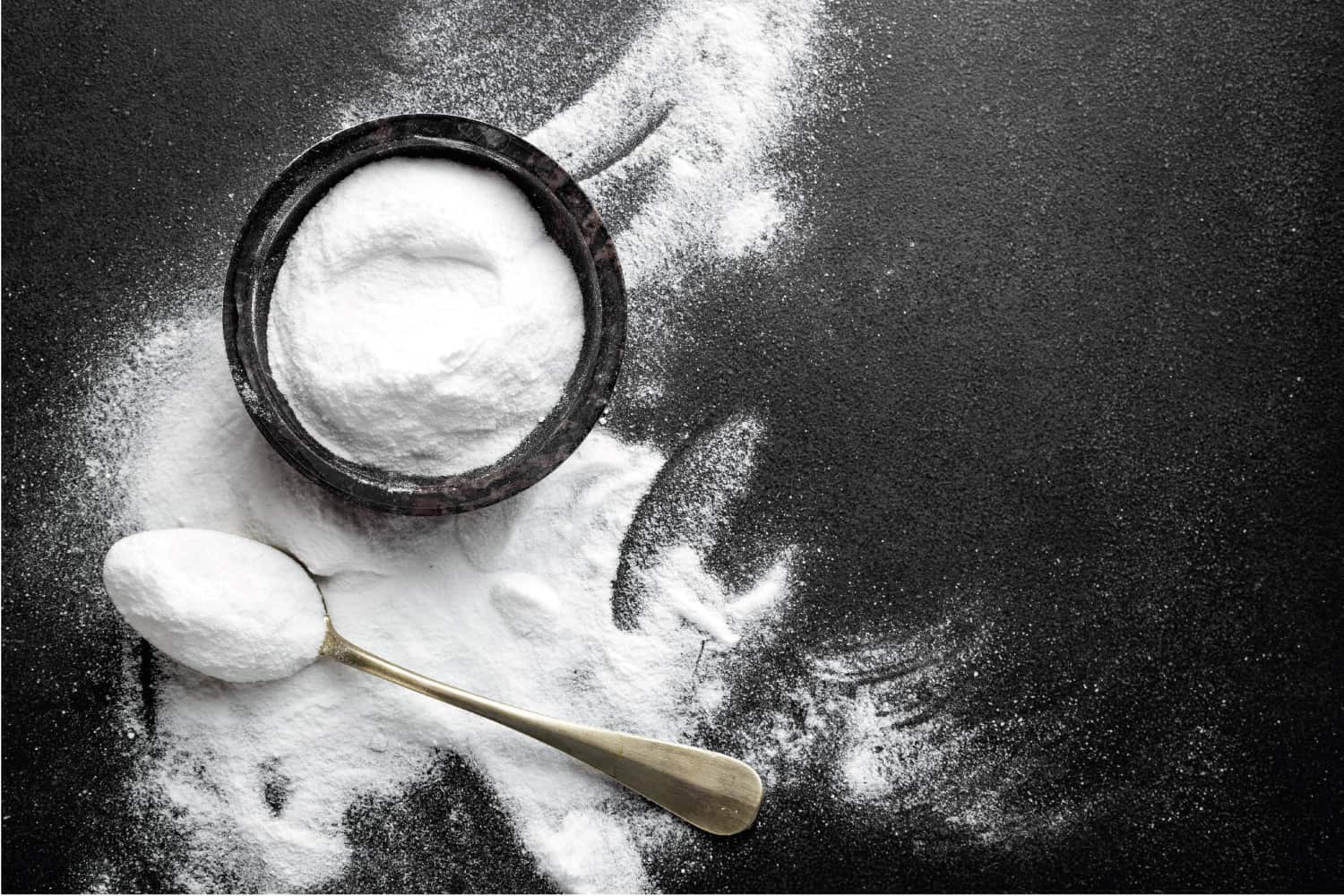 Some pro chefs also believe baking powder helps sop up chicken juices, especially if you leave your wings in the fridge to dry at least eight hours before baking. This technique may help improve the crispiness of your wings’ outer layer.

However, it’s worth noting that baking soda doesn’t seem to work as well as baking powder on chicken wings. Although baking soda gives the chicken a nice browning, foodies often report it has an undesirable “metal-like” taste.

You could see how the team at Delish uses baking powder in their baked wings recipe below:

Can You Air Fry Chicken Wings?

It’s safe to pop your fave chicken wing recipe in the air fryer. Many foodies love how delicious air-fried wings turn out without needing to waste vats of vegetable oil.

As a perk, it usually doesn’t take all that long to cook chicken wings in an air fryer. Most recipes recommend air frying chicken wings 400° F for just 10 - 15 minutes.

Just be sure to read our guide to the Best Oils For An Air Fryer before using this unit for the first time.

For more in-depth info on air frying chicken wings, you’ve got to watch this YouTube guide:

Should You Steam Chicken Wings Before Baking?

Some home cooks swear by steaming their chicken wings before putting them in the oven. This tip originated on an episode of Alton Brown’s hit Food Network show “Good Eats.”

The theory behind this method is to get rid of extra fat so your wings won’t over-cook or dry out in the oven.

Click here to see this vegetable steamer basket on Amazon.

Although some people love this hack, a recent study from Serious Eats didn’t notice stellar results from pre-steamed chicken wings. So, while steaming won’t “harm” your chicken wings, it may be a superfluous step.

To learn the entire reasoning behind steaming chicken wings, watch this clip from Alton Brown’s show:

How Long Are Baked Chicken Wings Good For?

If you baked a few too many chicken wings, you could wrap them in a food storage container and pop them in the fridge. According to the FDA, you should enjoy these leftover chicken wings within about three to five days.

Sure, leftover wings may never be as tasty as the original, but it’s better than nothing!

FYI: You could also freeze your baked chicken wings indefinitely. However, the FDA strongly recommends using your frozen chicken wings within about four months. After this time, chicken wings will significantly lose their flavor.

If you are going to freeze your chicken wings, please be sure to read our guide to Defrosting Chicken In The Microwave. 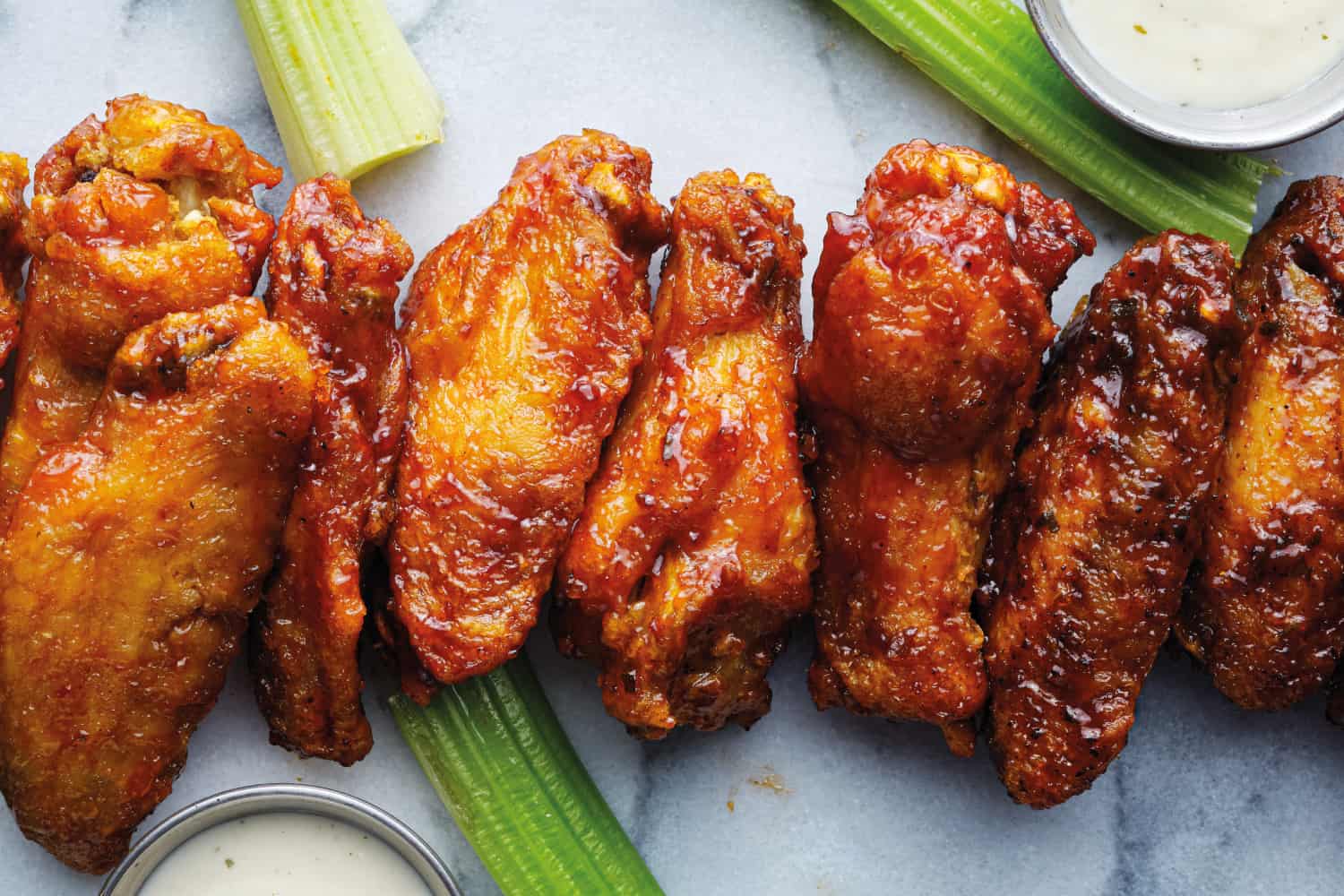 Even if you have no baking experience, it’s not that difficult to cook a batch of chicken wings. Generally, chicken wings only need about 45 minutes to one hour in a 400° F - 425° F oven.

Depending on your oven, you may need to adjust these specs, but you should figure out the ideal time after a few trial runs. Just be sure to double-check your chicken registers 165° F with a meat thermometer before serving.

Can You Use Sunflower Oil For Baking?

Should You Cover Mac And Cheese When Baking?