From eggplant parm to baba ganoush, there are dozens of great recipes that call for fresh eggplant. But how long can you keep your eggplant in the refrigerator? We've done the research, and here's the down-low:

In this article, we'll look at different storage techniques for eggplants as well as how to tell when they're fresh or spoiled. We'll even take a look at the cooking times for different preparation methods for eggplants! Read on to learn all about it! 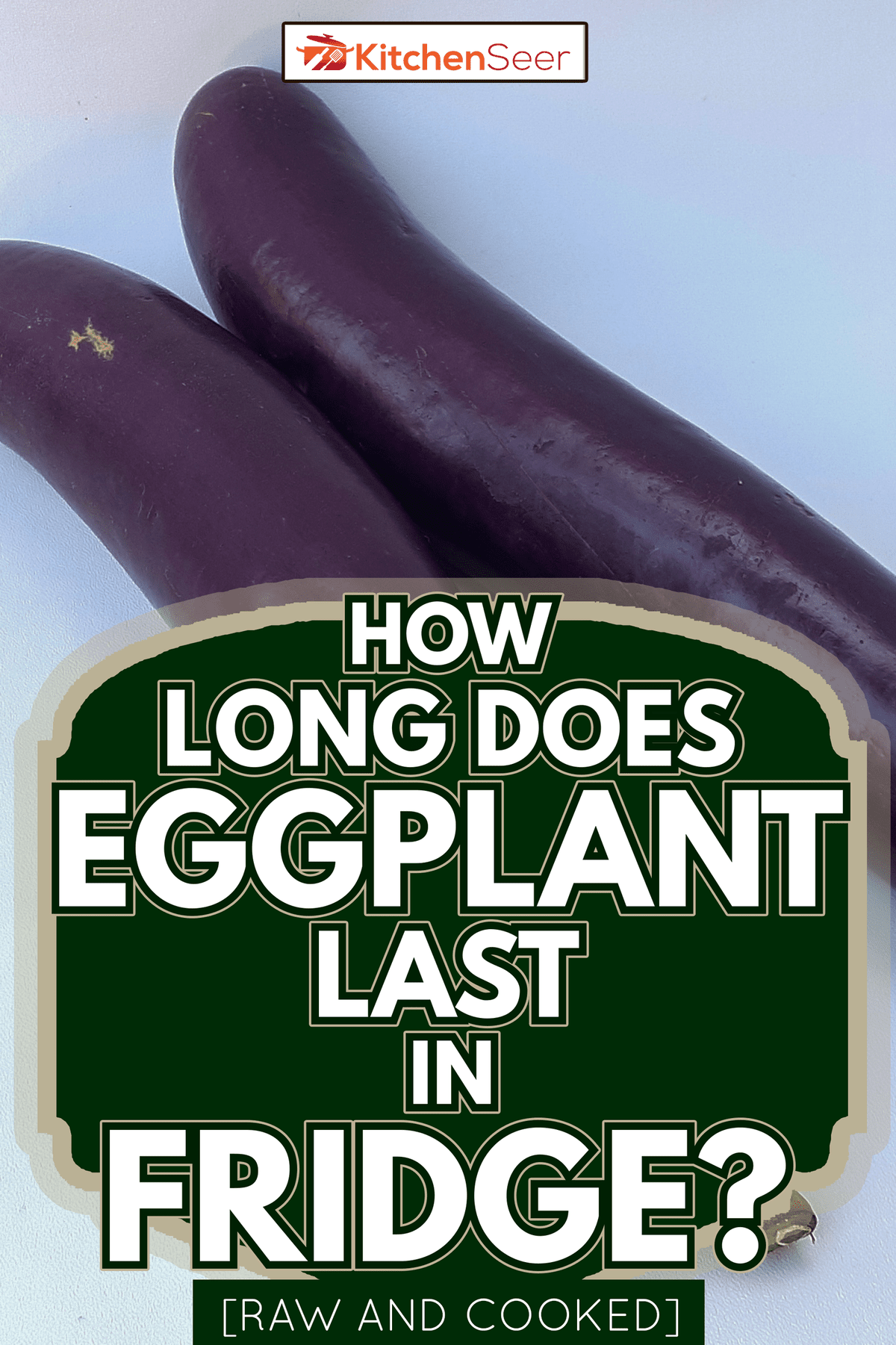 How Long Can You Store Eggplant? 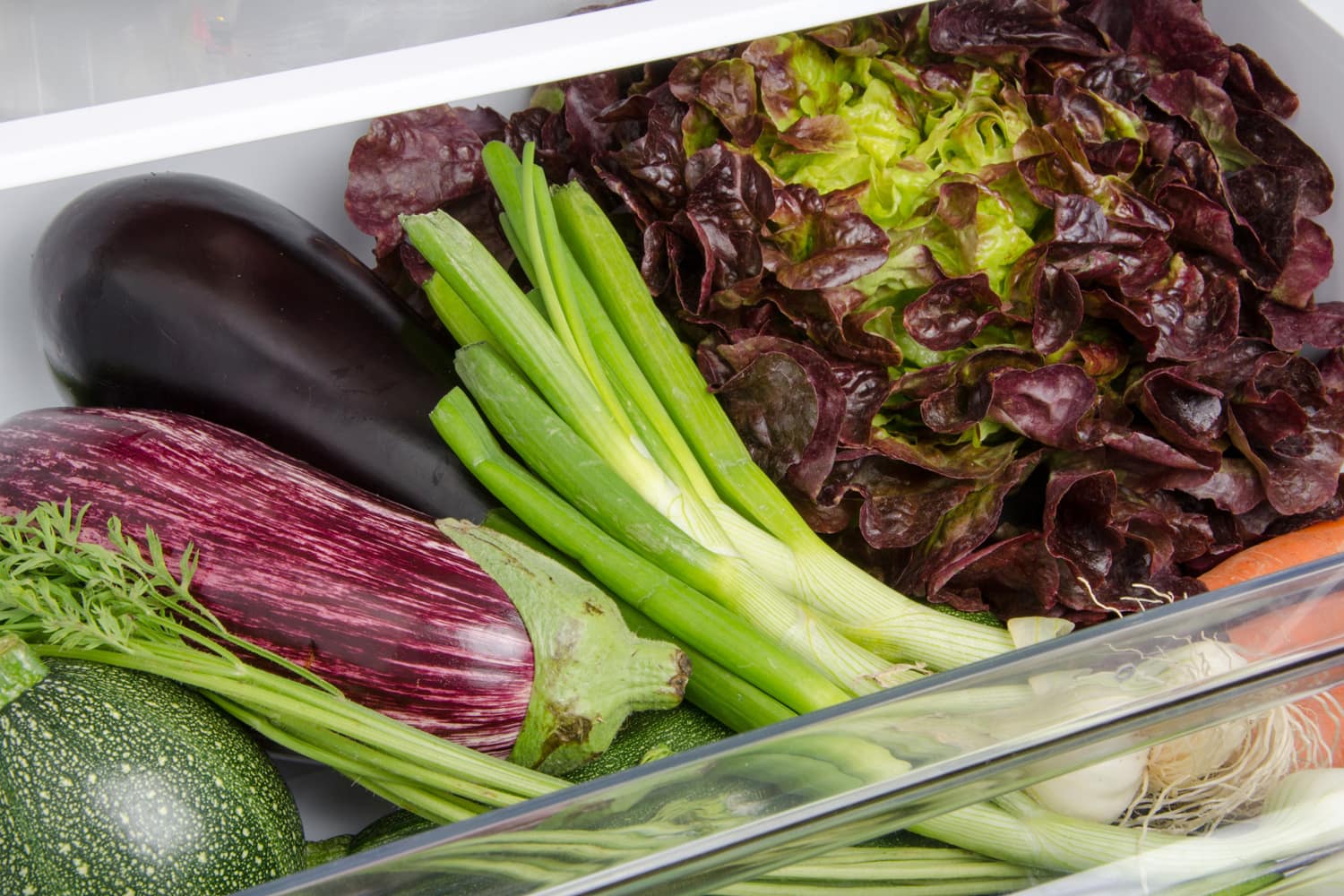 Eggplants, also known as aubergines, are delicious summer vegetables featured in cuisine around the world. To make sure your eggplants stay fresh longer, it's important to store them correctly.

If you need to store your eggplant for more than one day, you'll want to keep it somewhere cool and away from sunlight. A vegetable cellar is an ideal environment for this, and eggplants can last three to four days in a cellar.

However, vegetable cellars are not common in most modern homes. That's why you may opt to store your eggplants in the refrigerator instead. According to the food storage guide from North Carolina State University, eggplants can be refrigerated for three to four days.

One more option for storing eggplants is to freeze them. Frozen, eggplants can last for six to eight months. We'll cover the process for freezing eggplants in more detail later in this article.

How long can you store cut eggplant?

So far, we've covered how to store whole eggplants. However, once you've cut up your eggplant, different rules apply.

Cut eggplant shouldn't be left at room temperature for more than two hours. This is because cutting damages the vegetable's cells and leaves them susceptible to bacteria. In this case, it's best to follow the USDA's two-hour rule.

You'll also find that eggplants start turning brown shortly after you cut them. This is because eggplants oxidize, much like apples and potatoes, when exposed to oxygen. While this oxidation isn't dangerous, it does give your eggplant a less appetizing appearance.

Use your refrigerated, cut eggplant within two to three days.

How long will eggplant parm last in the fridge?

One of the most popular uses of eggplant is the traditional Sicilian dish eggplant parmesan. This dish is a satisfying combination of eggplant (usually breaded and fried), tomato sauce, and cheese.

The dish is as rich as it is satisfying, so it may leave you with leftovers. To store your leftover eggplant parm, make sure to keep it in an airtight container. Next, wrap it in plastic wrap for an extra security measure. It can keep for three to five days in the refrigerator like this.

Eggplant has a relatively short shelf life. To make matters worse, this vegetable (botanically a fruit in the nightshade family) is delicate and sensitive to cold temperatures and ethylene gas released by other fruits and vegetables. So what is the best way to store this tasty nightshade?

The best storage for eggplant is the shortest storage. For the best texture and flavor, try to use your eggplant the same day you buy it and keep it at room temperature. Keep it away from ethylene-producing produce, such as tomatoes, bananas, and apples.

Of course, this isn't always possible. If you will use your eggplant in the next two to five days, the best way to store it is in the refrigerator in the crisper drawer.

Wrapping the eggplant in paper towels and then placing it in an open plastic bag before refrigerating it will help protect it from moisture and ethylene gas.

How to freeze eggplant

If you need to keep your eggplant good for the long haul, one option is to freeze it.

However, this isn't as simple as just tossing a whole eggplant in the freezer. Instead, you'll need to cut and blanch your eggplant before freezing it. Simply follow these steps below

Once frozen, your eggplant should last for up to six months. Simply thaw the eggplant by putting it in the refrigerator the day before you will use it.

How to pickle eggplant

Another way to store eggplant for a long time is to pickle it. This is one of the most traditional methods to preserve eggplants for long-term storage, but it is different than the other storage methods mentioned.

This is because pickled eggplants can't be used in recipes the same way frozen eggplants can. However, they do make great additions to sandwiches and pasta dishes. They're also delicious when served simply on toast.

There are different ways to pickle eggplants. A traditional, Italian method involves these steps:

You can get the full recipe for these Italian-style pickled eggplants from PBS. You can also see the process in the video below:

How can you tell if an eggplant has gone bad? 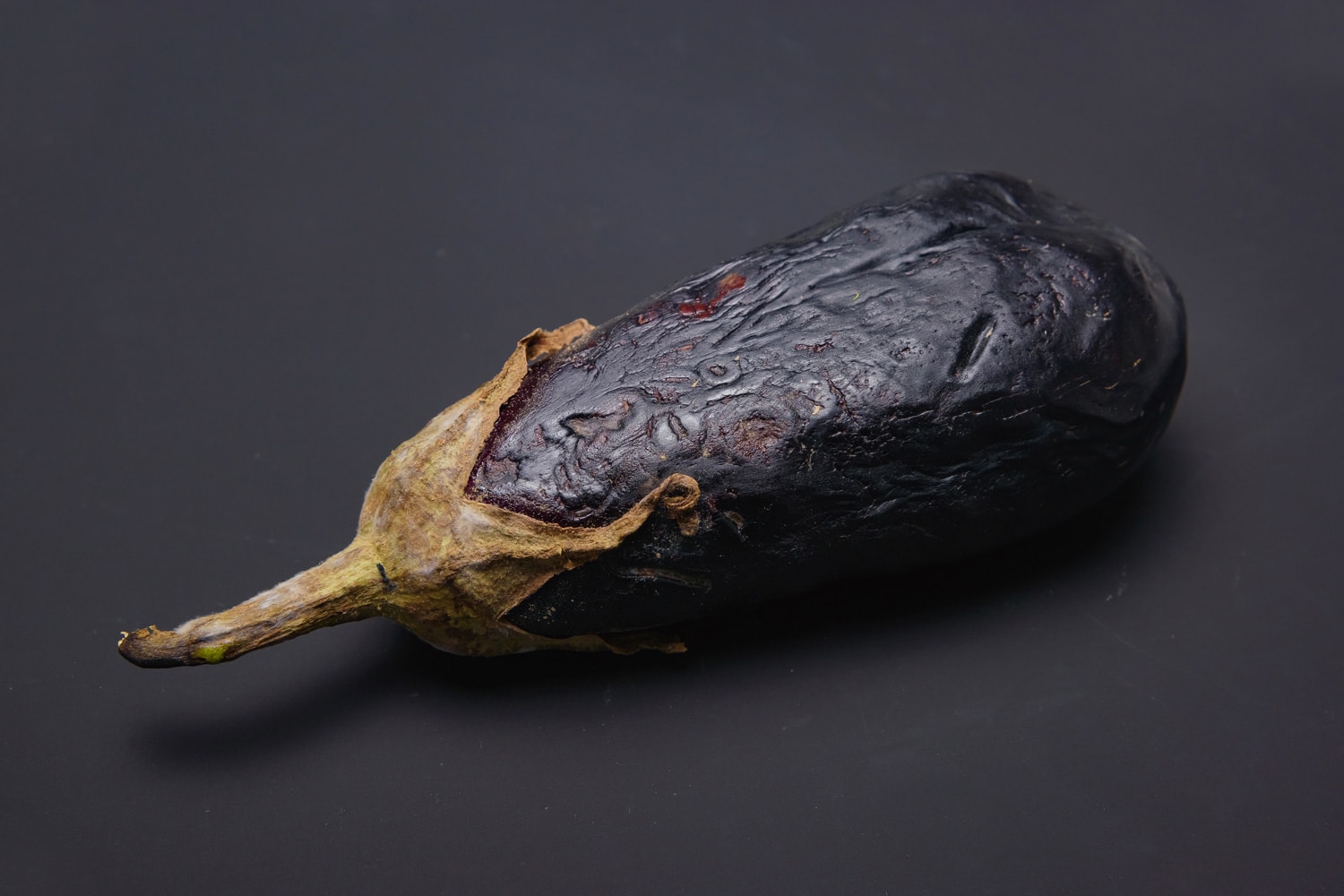 Nothing gold can stay, and even good eggplants can go bad. Bad eggplants can ruin a great recipe and, in the worst cases, can even make you sick.  Here are the telltale signs to look out for:

The skin is wrinkly

Fresh eggplants should have smooth, taught skin. Wrinkly or loose skin is a sure-fire sign that your eggplant is getting old.

An eggplant with just a little wrinkling is still safe to eat but may start tasting bitter or taking on a rubbery texture. It will also be harder to peel.

The flesh is soft when touched

When eggplants are ripe, they have firm, almost bouncy flesh. As they get old, that flesh turns soft.

Disease or rough handling can also cause the flesh to soften. If you notice your eggplant has soft spots, these will likely be dark and need to be tossed when you cut the eggplant.

The color is browning

Visually inspect your eggplant before cooking with it. The stem should be green, the skin a dark purple (for most varieties), and the inside should be white when cut into (before oxidation turns it brown).

If you notice browning in any of these areas, your eggplant is likely going bad.

Is it okay to eat an eggplant that's gone brown?

As we mentioned earlier, browning occurs quickly after cutting your eggplant due to oxidation. This kind of browning is different than the browning that happens as eggplants spoil.

If your eggplant is white when cut into, but then turns brown, it is still safe to eat. It may be less visually appealing, but it is still fresh and healthy.

To prevent oxidation, you can apply lemon juice to cut eggplant. Either spritz it with lemon juice in a spray bottle or rub it with a cut lemon. This won't completely prevent browning, but it will minimize and slow it.

This probably goes without saying, but if you find mold on your eggplant, it's time to toss it.

Many people think they can just cut off the moldy area and use the remaining eggplant. However, only a portion of the mold is visible to the naked eye. The mold's mycelium may still be present where you can't see them.

Consuming mold is not only unpleasant, it can be very toxic. Play it safe and dispose of eggplants with any signs of mold.

How long does eggplant take to cook? 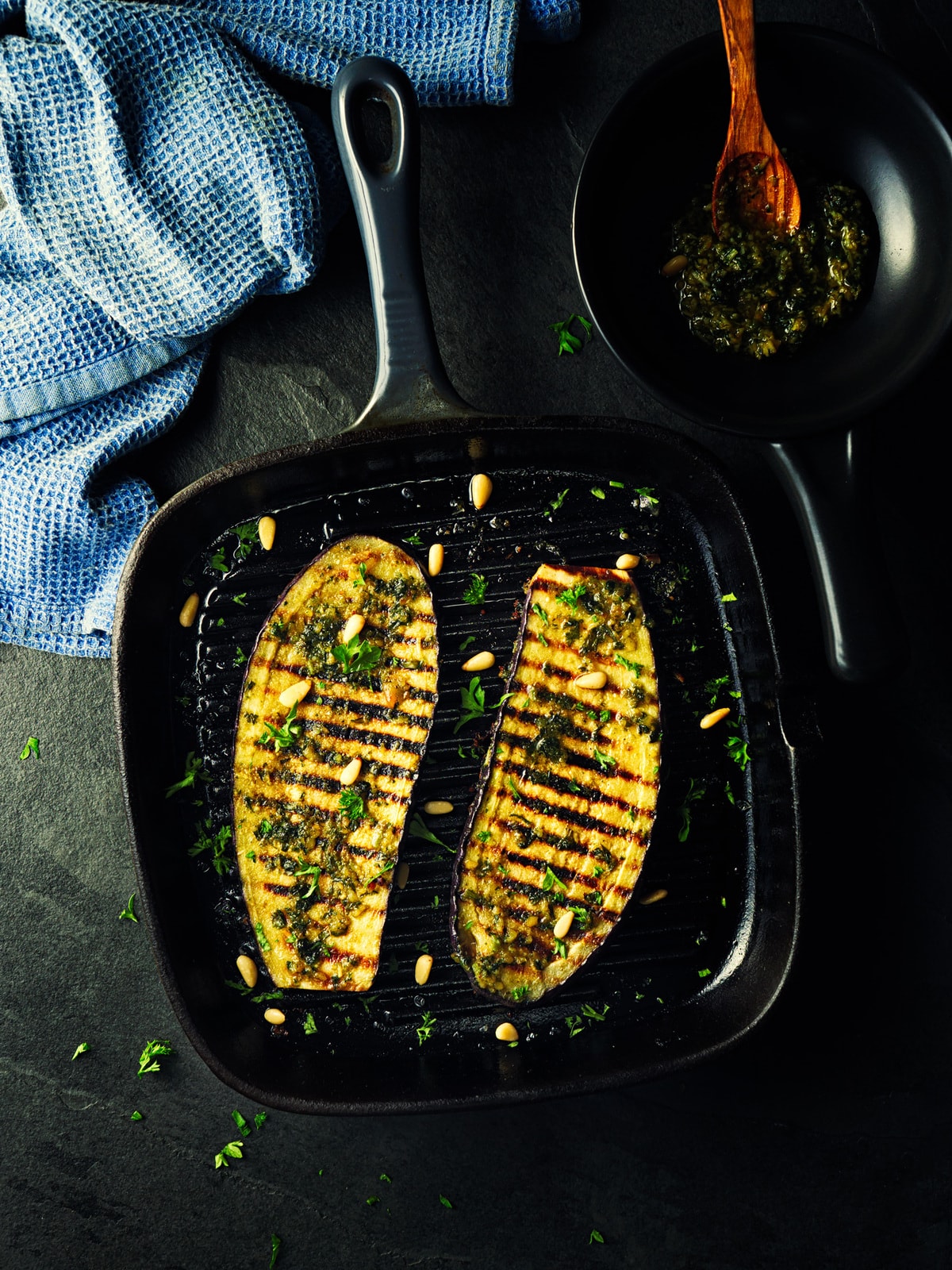 Now that we've seen more about how to store your eggplants, let's take a look at the fun part: cooking them.

Eggplants can be cooked in a variety of ways which all require different cooking times. Let's look at a few

Now you know more about storing your eggplant and making sure it's as fresh as possible for your next dish!

Be sure to check out these great articles to learn more about proper food storage:

How Long Does Dough Last in the Fridge?

How Long Does Cheese Last in the Fridge?

What’s the Best Pot for Cooking Rice? [Size and Type]

Can A Dutch Oven Go On A Stovetop?

How To Clean A Copper Mixing Bowl [4 Effective Ways]