A good steak is a great way to make any meal feel special, whether it's for a special occassion or just another Tuesday. But how long can you keep a raw steak at room temperature? We've done the research, and here's what you need to know.

Raw steaks can be stored in a refrigerator under 40°F for three to five days.

In this article, we'll take a closer look at keeping steak and other meat at room temperature as well as the refrigerator. We'll also see how these guidelines change for cooked meat and jerky. Read on to learn more about it! 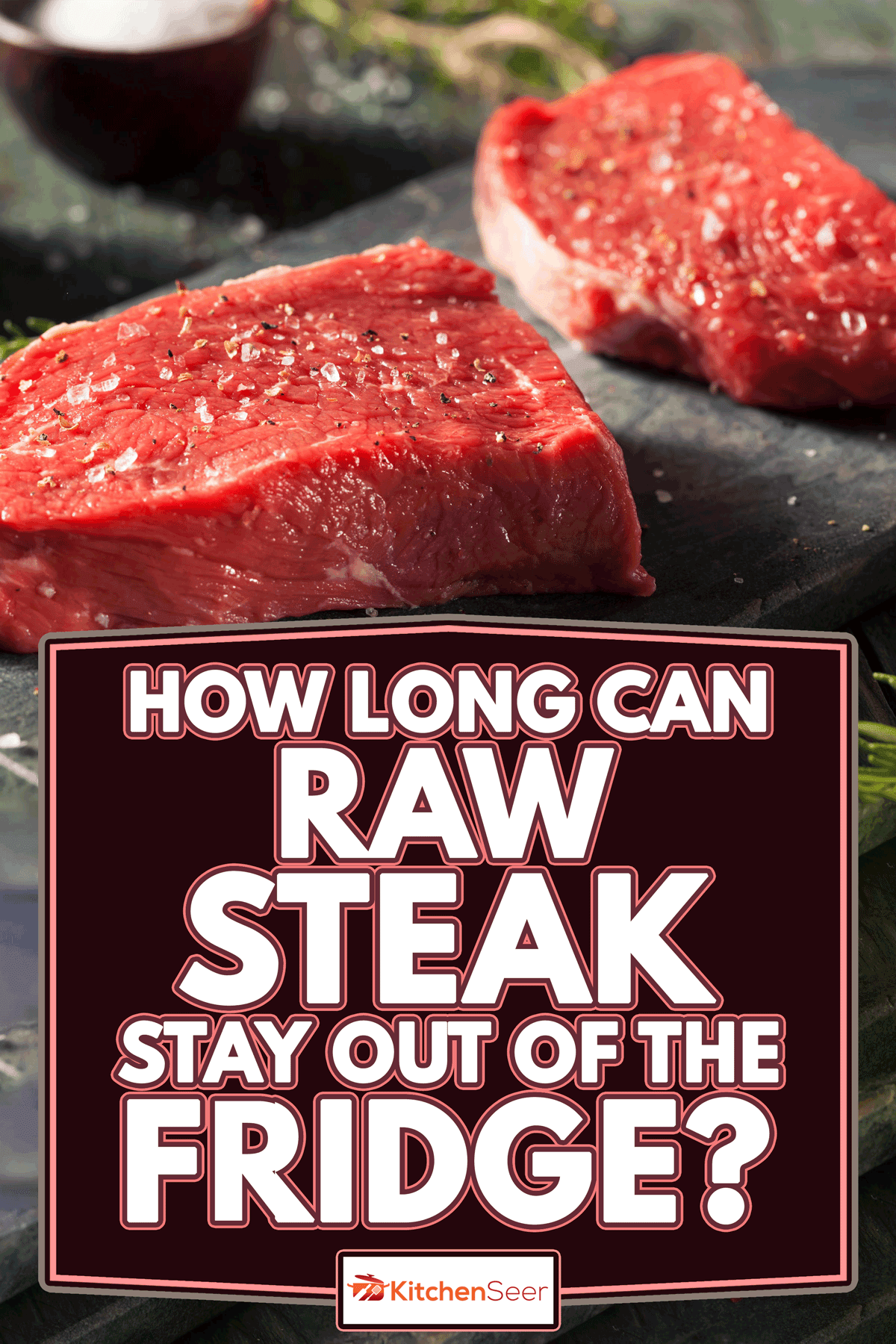 How long can you leave raw meat at room temperature?

We all know that food goes bad and that certain foods are more susceptible to going bad than others. It's also no suprprise that eating spoiled food can make you sick.

Meat and dairy are particularly prone to this, which is why both the USDA and FDA recommend leaving these foods at room temperature no more than two hours.

In situations where the temperature is hot, specifically over 90°F, the USDA and FDA both recommend leaving meat (along with eggs and dairy) out for now more than one hour. 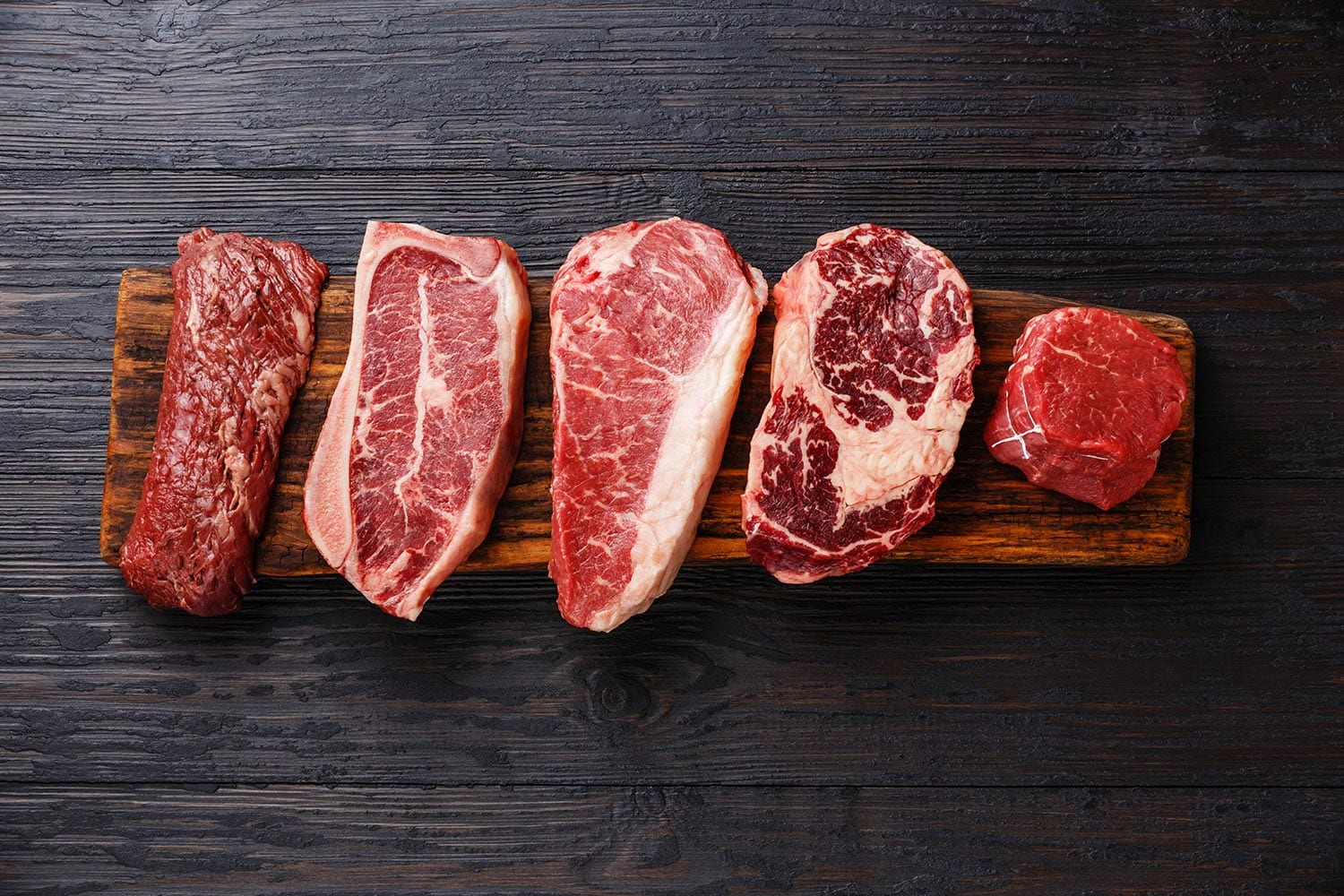 The reason you can only leave meat and other foods out for such a short time is that room temperature falls into the so-called "danger zone."

Not to be confused with the Kenny Loggins song of the same name, this danger zone refers to any temperature between 40°F and 140°F.

Within this range of temperatures, bacteria can grow freely and rapidly. Due to how meat is butchered, it is at a higher risk of being contaminated with dangerous bacteria.

Temperatures between 90°F and 140°F are particularly dangerous. Bacteria increase even more quickly, which is why the USDA and FDA recommend either cooking or refrigerating food before it has spent an hour in this range.

How long can you leave cooked meat out at room temperature?

Remember this for your next barbecue and don't leave cooked meat sitting for too long, especially on hot days.

When you want to heat up your leftovers, aim for an internal tempearture of 165°F for maximum safety.

These recommendations don't just apply to cooked meat. Even foods that can be stored at room temperature raw need to be refrigerated after they are cooked.

Can you put food in the refrigerator while it is still hot?

The idea that you need to allow food to cool down before you put it in the refrigerator is widespread, but is it accurate?

Not according to the USDA. Small amounts of hot food can be put in the refrigerator safely. Larger quantities of hot food should be divided into smaller portions before refrigerating.

So, where does this idea come from? Well, it is true that putting a large amount of hot food in the refrigerator could be dangerous, but only at very high temperatures and large quantities.

However, most homes these days have large, efficient refrigerators and rarely do home cooks move large sums of food directly from the stove to the refrigerator.

Can you marinate meat at room temperature? 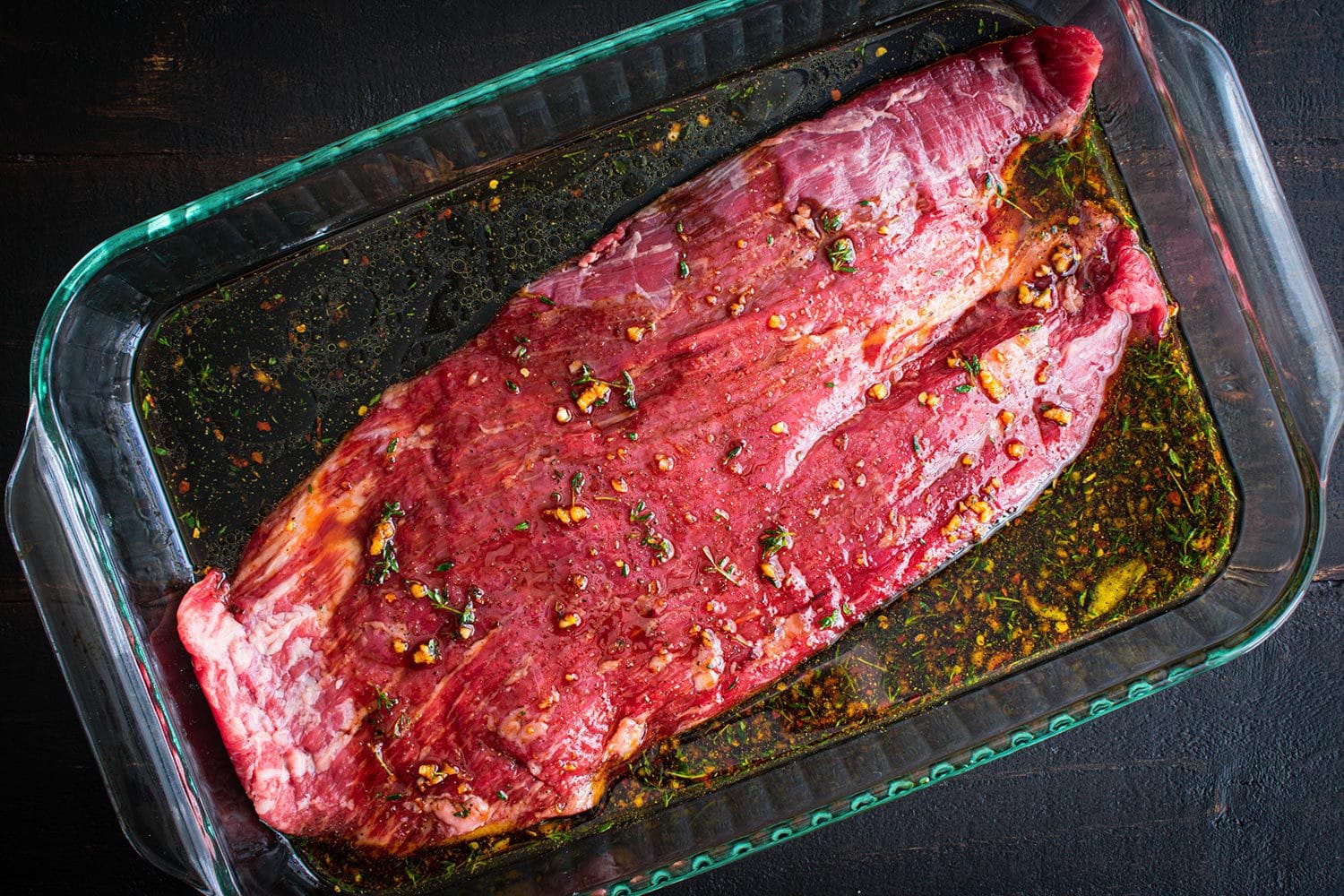 Marinades are a popular way to infuse meat with flavor and some may even improve the texture of the meat. But can you marinade meat at room temperature?

This is enough time for a lot of great marinades, especially for thinner cuts of meat like skirt steak. This recipe from Cooking Light only calls for a thirty-minute marinade.

If a recipe calls for a longer marinade, such as overnight, you'll want to do so in the refrigerator.

Using a plastic bag is a great way to maximize surface contact between the marinade and the meat. Just be sure to put the plastic bag in another container in case there is a leak.

If your recipe calls for making a sauce with the marinade, be sure to bring it up to a boil first for safety.

How long can you store meat in the refrigerator?

We've seen that meat shouldn't be stored for long at room temperature, but how long will it actually last in the fridge? Well, that depends on the meat in question.

FoodSafety.gov has published guidelines on this topic. Here are some of the highlights:

When storing meat in the refrigerator, you should keep it on the lowest possible shelf. This way, if any juices drip from the meat, there will be a lower risk of cross contamination.

Can you dry age steak at home? 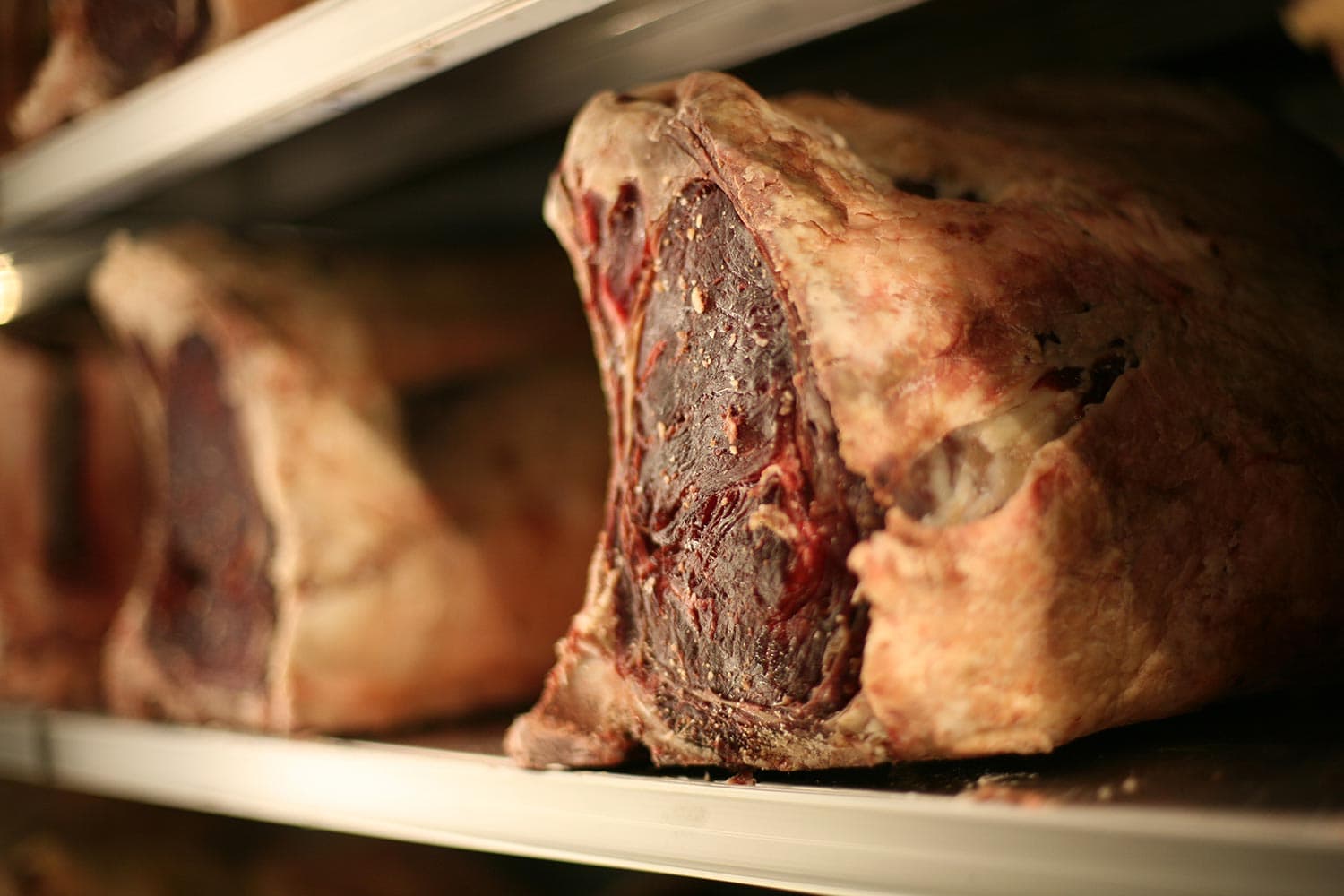 Dry-aged beef is prized for its concentrated flavor and tender texture. However, it's often necessary to go to a specialty butcher and pay out top dollar for great dry-aged beef.

But what if you could dry-age beef at home? Maybe you can!

Popular sites like Serious Eats and Steve Raichlen's Barbecue Bible have guides on how to dry age beef at home.

To do so, you'll need to buy a large cut of meat that you will cut into multiple portions after aging. You can't dry age individual steaks. A rib roast works well for this.

You will then place the beef on a rack in the refrigerator with a fan in it. The fan helps circulate the air and control humidity. The beef is then aged for two weeks up to sixty days.

After two weeks the meat will start becoming more tender, but you won't develop the unique taste associated with dry-aged beef. The longer the meat ages, the more pronounced this flavor will become.

Four to six weeks is plenty to develop those distinct flavors without them becoming overpowering. You can experiment to see what you like the most.

After aging the beef to your desired level, you will then trim off the fat and dry meat on the surface as well as any moldy bits. Then you can roast your dry aged beef or cut it into individual steaks.

Dry-aged beef is most often purchased at restaurants where the process is carefully regulated to maintain safety.

Of course, dry aging at home requires keeping meat in the refrigerator longer than the FDA's guidelines. Because of this, you should know that there is a risk of contamination.

Be sure to check the beef throughout the aging process. It is normal for the steak to develop a funky smell, similar to cheese. However, if it smells rotten or appears slimy, you're likely dealing with bad beef that will need to be tossed.

Tossing a pricy rib roast can be heart breaking, but far less so than food poisoning. Always err on the side of caution and if the costs outweight the rewards for you, you may want to stick to getting your dry-aged beef from the professionals.

How to store jerky safely 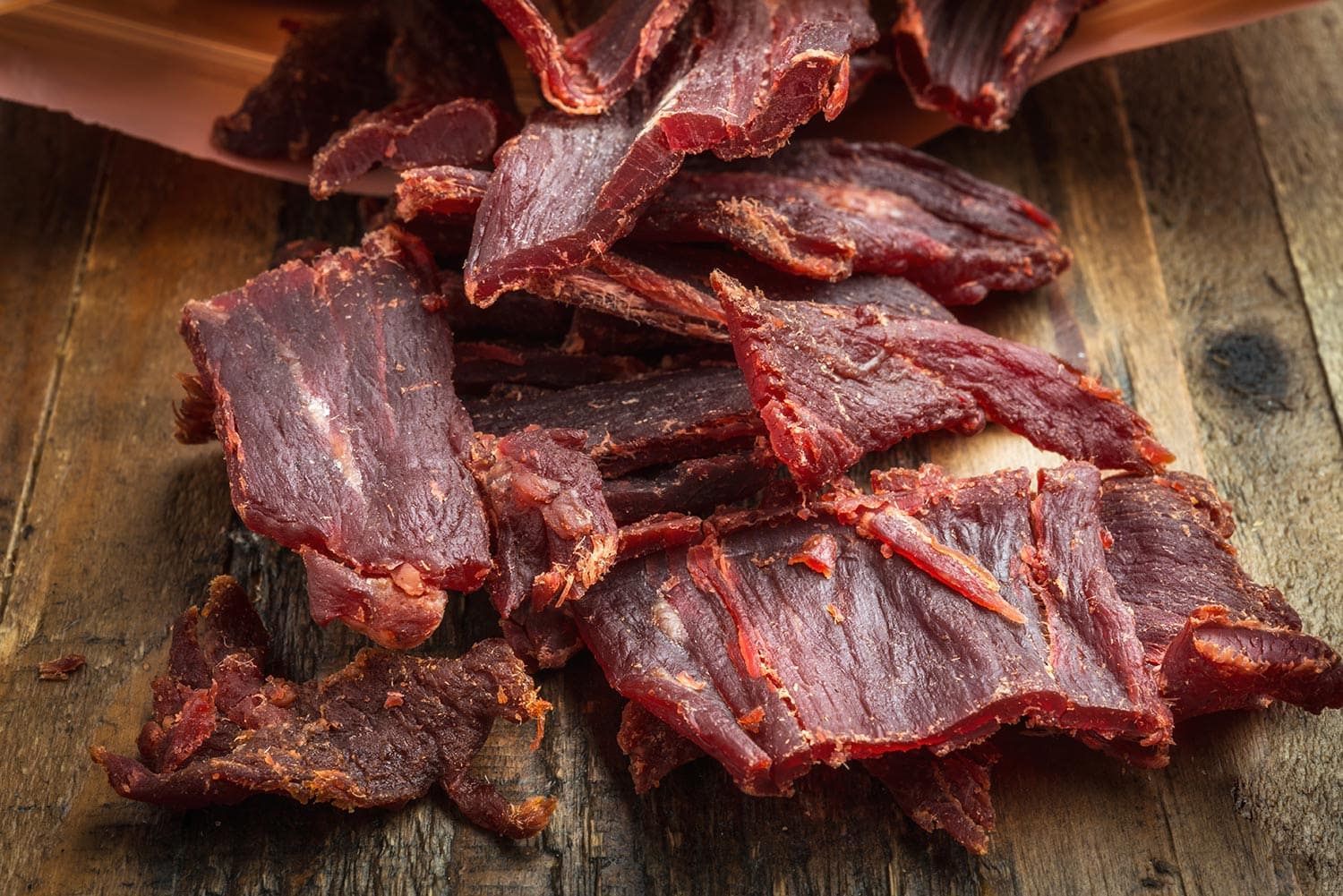 So far, we've looked at raw and cooked meat, but what about jerky?

Dehydrating meat to extend its longevity has been a practice for thousands of years and many still enjoy jerky today.

Store-bought, pre-packaged jerky can be stored at room temperature until the "best by" date safey until it is opened. However, it will maintain flavor best if stored in a cool, dark place, such as a pantry.

After opening, pre-packaged beef jerky should be kept in the refrigerator in an air-tight container.

Homemade jerky can be stored at room temperature for two weeks if kept in an air-tight container, according to the University of Georgia. They also recommend keeping jerky in the refrigerator or freezer to extend its shelf life.

A steak is a beautiful thing and a shame to waste due to improper handling. Now you know more about food storage and safety so you'll be able to enjoy your next steak without worrying about contamination.

We've also learned more about storing different types of meat and even how to dry age beef at home safely.

If you enjoyed learning about this topic, you should also check out these great posts:

Does Steak Go in the Fridge or Freezer?

Should You Put Water In The Bottom Of The Roasting Pan?

Should You Wrap Cheese In Foil Or Cling Film?