If you're considering purchasing a pressure cooker, the first step is deciding how big. So just how big is a pressure cooker, and what are your choices? We've checked some of the top manufacturers and appliance recommendations to spell out your options for you.

Keep reading, and we'll explain the different sizes and what they're for. We'll cover just what size pressure cooker is best for you, and what the smallest option out on the market is. Then we'll go over some safety tips for using your pressure cooker, like why you shouldn't overfill and just how much liquid to add. 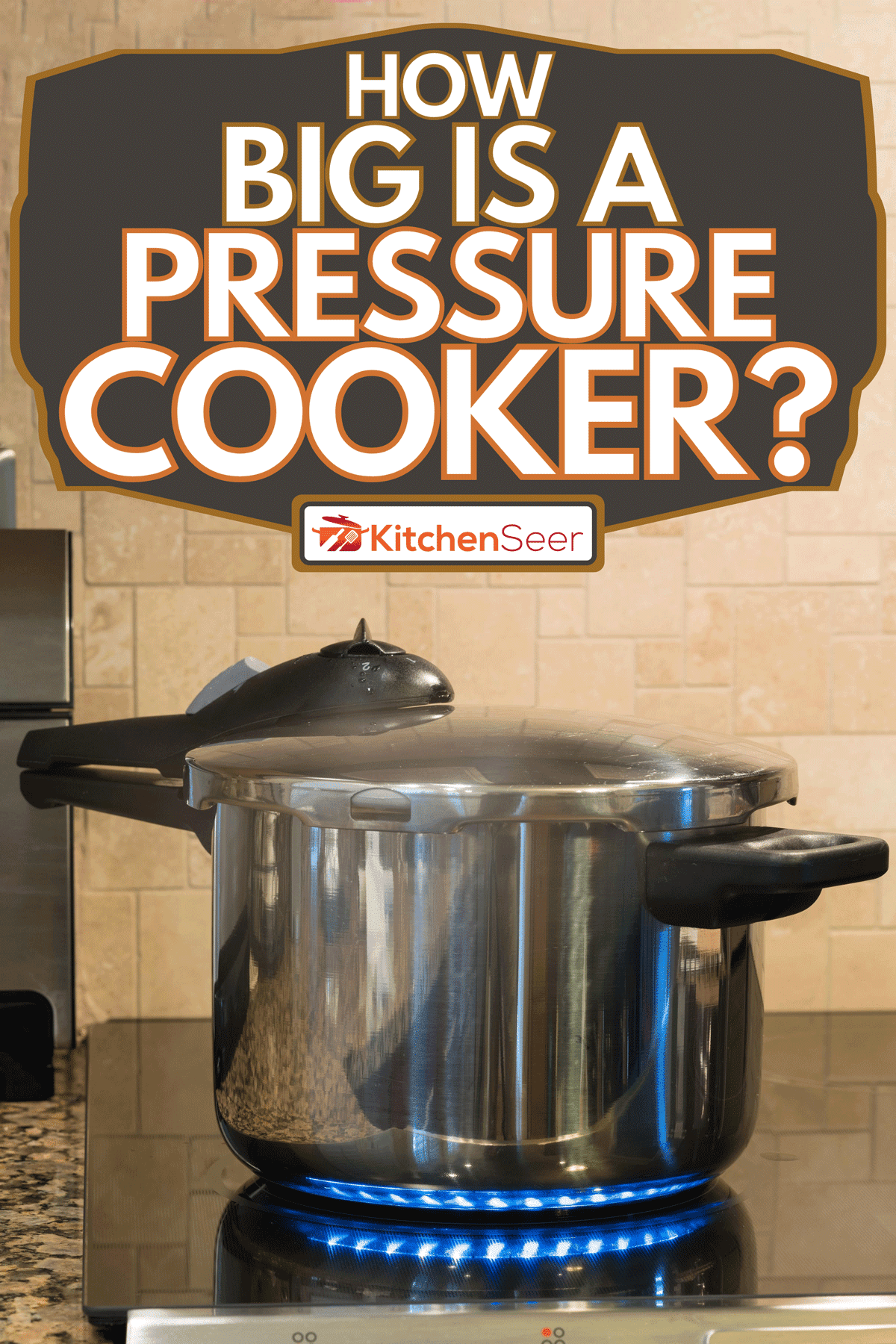 The smallest pressure cookers are around 2 liters or 2 quarts. There's virtually no upper limit to how big a pressure cooker can be - it's easy to find ones as big as 32 liters! These giant-sized pressure cookers are for processing massive amounts of food, however. These aren't for the casual user - these beasts are for the sort of person who cans big jars of pasta sauce every year on their stove.

For the more ordinary chef, you're likely looking for a pressure cooker that is 4, 6, or 8 liters. Ten liters or bigger starts crossing over into the size that, again, could be used for canning or making large batches of food. 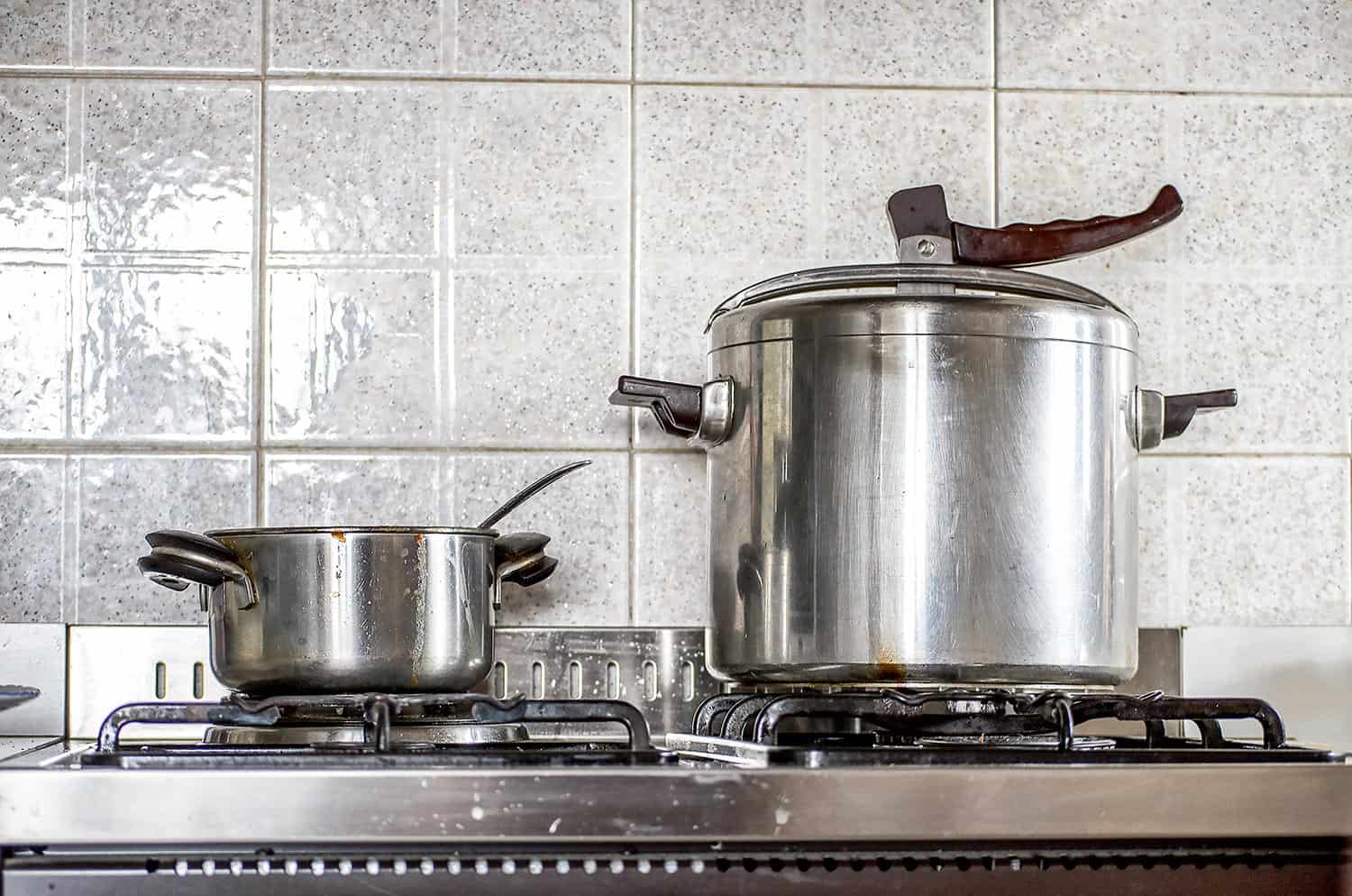 What Size Pressure Cooker Do I Need For A Family Of 4?

If you're cooking meals for a family of four, then your ideal pressure cooker is between 4 and 6 liters. A liter per person should be adequate. Of course, if you have a family of big eaters, then you might want to go up to the 6-liter size.

Another advantage of the 6-liter pressure cooker is that it can leave you with leftovers. Some people love having a little extra food left for later - and some people hate it!

One thing to keep in mind is that bigger isn't always better. The bigger the pressure cooker, the more space. If that space is mostly empty, and there's a lot of water to very little food, your results may not be quite what you intended.

In short: if you like leftovers, regularly have extra dinner guests, or have some big mouths to feed, go with a 6-liter pressure cooker. If you prefer making the right amount each and every time and consistently for four people or less, then a 4-liter should suffice.

A 6-liter pressure cooker is typically big enough for a small family. It's large enough to feed 3-6 people. You can even use it to cook an entire small roast or chicken!

The most important way to decide if a pressure cooker is big enough is to first decide exactly how you plan to use it. If it's for preparing dinner for four people, a 6-liter cooker is a great choice.

If you're interested in canning and preserving big amounts of food, on the other hand, 6 liters might be difficult to work with. Similarly, if you make big batches of food to freeze for later, you might need a larger size. 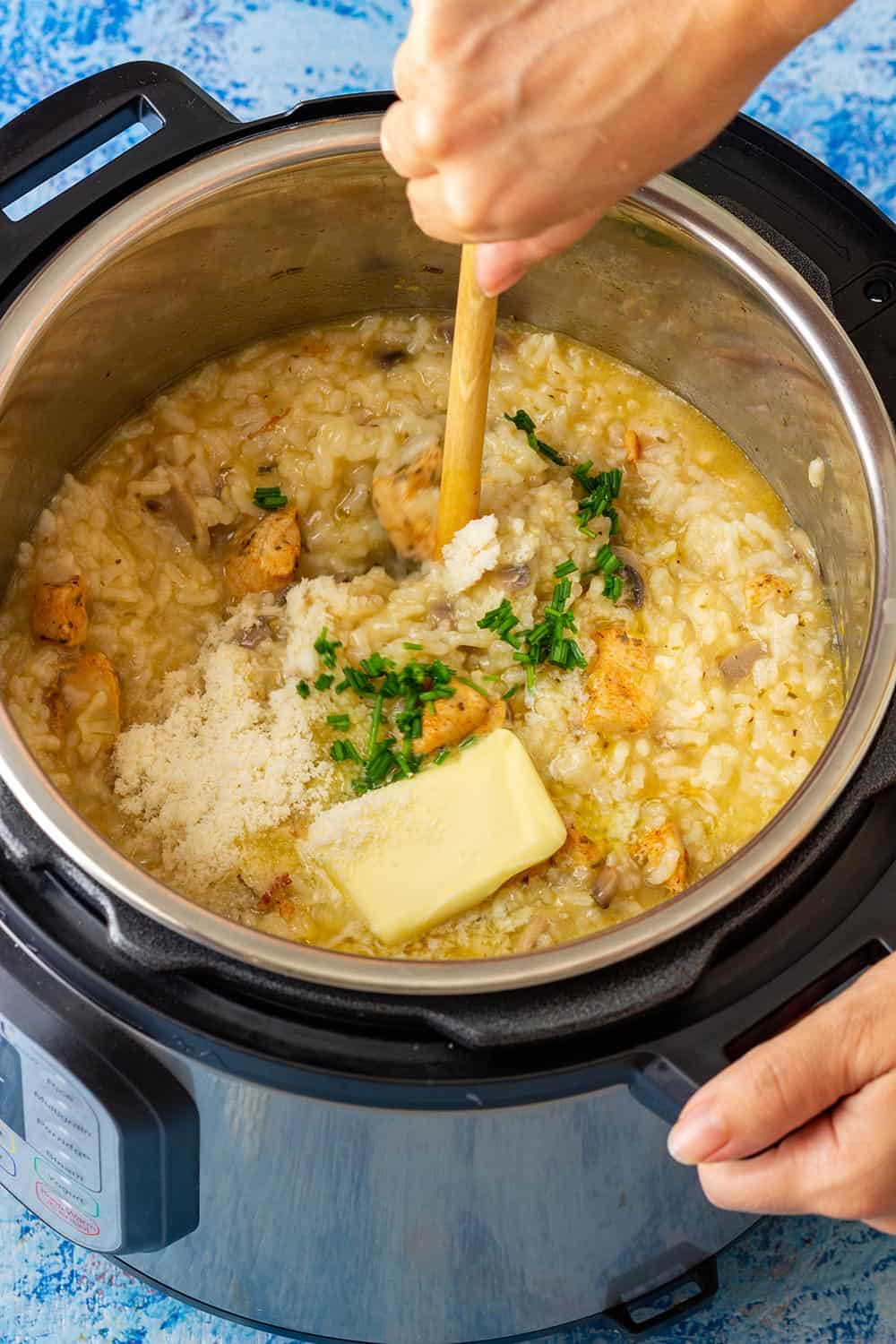 What Is The Smallest Size Pressure Cooker?

The smallest pressure cooker we found on the market today is this quaint little 1.5 liter one. This is likely to be as small as they come.

This is a pretty obscure size. While it's great for occasions like camping or motor home use, it's not in high demand by many people. For this reason, you won't find many manufacturers who offer it.

However, if you go just a little bigger, to 2 liters, you can find plenty of options.

Click here to see this 1.5-liter pressure cooker on Amazon.

How Full Can You Fill A Pressure Cooker?

Most pressure cookers come with markings on the insides. These markings let you know the minimum and maximum fill levels. Always follow this guide, and do not overfill your pressure cooker!

In most cases, this means that your pressure cooker shouldn't be more than 2/3 full. If you're preparing a liquid, leave it closer to half-full. Foods that expand like rice need some extra room - aim for about 1/3 full.

What Happens If I Overfill My Pressure Cooker?

If you overfill your pressure cooker, it can affect the taste and quality of the food. Too much steam from excess liquid might make the food mushy. Too little liquid means you won't get enough steam - not only can this affect the food, but it can damage parts of the pressure cooker.

It can also be hazardous. If there's too much food, then there might not be enough space for the building steam. In a worst-case scenario, this can even cause the pressure cooker to explode.

For this reason, always pay careful attention to the manufacturer's instructions. Follow directions regarding how high to fill your pressure cooker safely. Never fill past the maximum fill line or below the minimum fill line. When properly used, pressure cookers are very safe to operate. 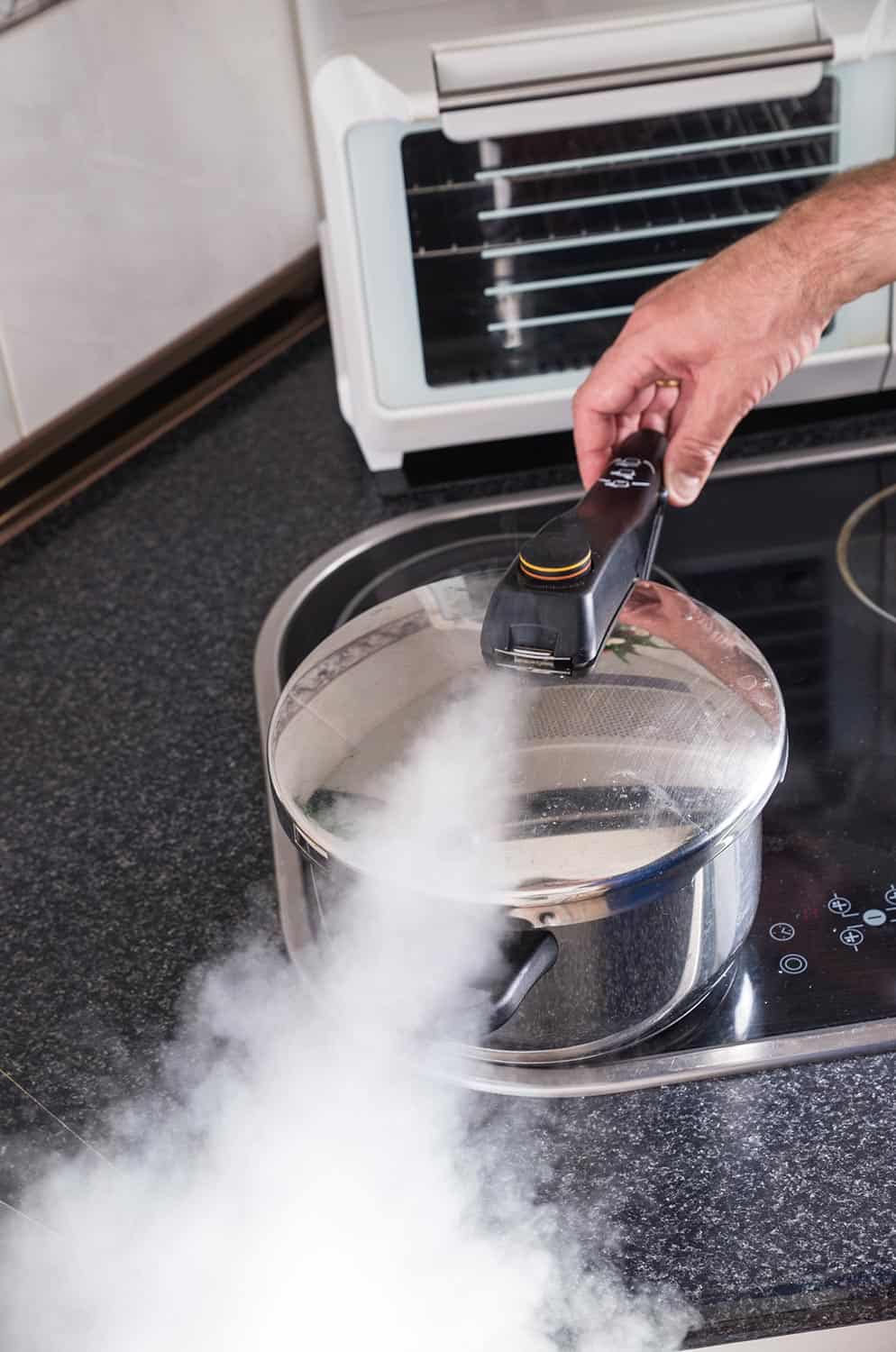 How Much Water Do You Put In A Pressure Cooker?

It's vital to keep enough water in the pressure cooker - the steam generated by the water is key to proper cooking. If you're following a pressure cooker recipe, be sure to use as much water as the recipe directs.

If the water amount isn't specified, using one cup of water is a good estimate. You can use another liquid in place of water, such as broth, as long as there is at least one cup of liquid.

Is A Rice Cooker A Pressure Cooker?

A rice cooker is not the same as a pressure cooker - there are many differences between these two kitchen appliances!

A rice cooker does not speed up cooking time. It is also designed for just rice. A pressure cooker can be used to cook rice - in fact, cooking rice was one of the features offered on the original Instant Pot. But it doesn't work in reverse - a rice cooker just isn't made to handle a variety of foods in the place of a pressure cooker.

This is primarily because of how they cook. A rice cooker heats, just like a stove. While it's a separate, self-contained unit, it's still working in the same method that a stove does.

A pressure cooker, on the other hand, traps steam. This steam lets the overall temperature inside the pressure cooker rise dramatically. As a result, it works faster - the Instant Pot claims it can cook up to 70% faster.

So a rice cooker can, depending on the model, sometimes heat up more than just rice. Some rice cookers can be used similarly to a slow cooker for foods like porridge. But since it doesn't use the same technology as a pressure cooker, you can't try to use it in the place of one.

Pressure cookers come in a variety of sizes, from 2 liters to greater than 32 liters. Standard sizes for pressure cookers are 4, 6, or 8 liters for preparing meals. A general rule of thumb is to assume about 1-liter per person, so a 4-liter pressure cooker can prepare food for four people or less.

But if you like to have leftovers, or prepare large amounts of food for freezing, go with a larger size. Always use your pressure cooker safely - follow the manufacturer's instructions and never overfill.

If you enjoyed this article, see also:

Should A Pressure Cooker Leak Steam?

Microwave Oven Vs. Microwave: Are They The Same?

Cuisinart Blender Not Working – What To Do?