Would you like to know if you can get dents out of a refrigerator? Well, we have researched this topic and have the solutions for you. It is helpful to understand how to remove dents from a fridge, so you have a cheap reliable method of keeping your refrigerator dent free.

You can get dents out of a refrigerator. While there are several ways to remove dents from refrigerators, they fall into two main categories, contracting the metal and pulling out the dent.

In this article, we will learn how to remove dents from a refrigerator. We will also learn the answers to other interesting related questions such as, how much does it cost to fix a dent in a fridge, and is it cheaper to repair or replace a refrigerator? Keep reading to learn more. 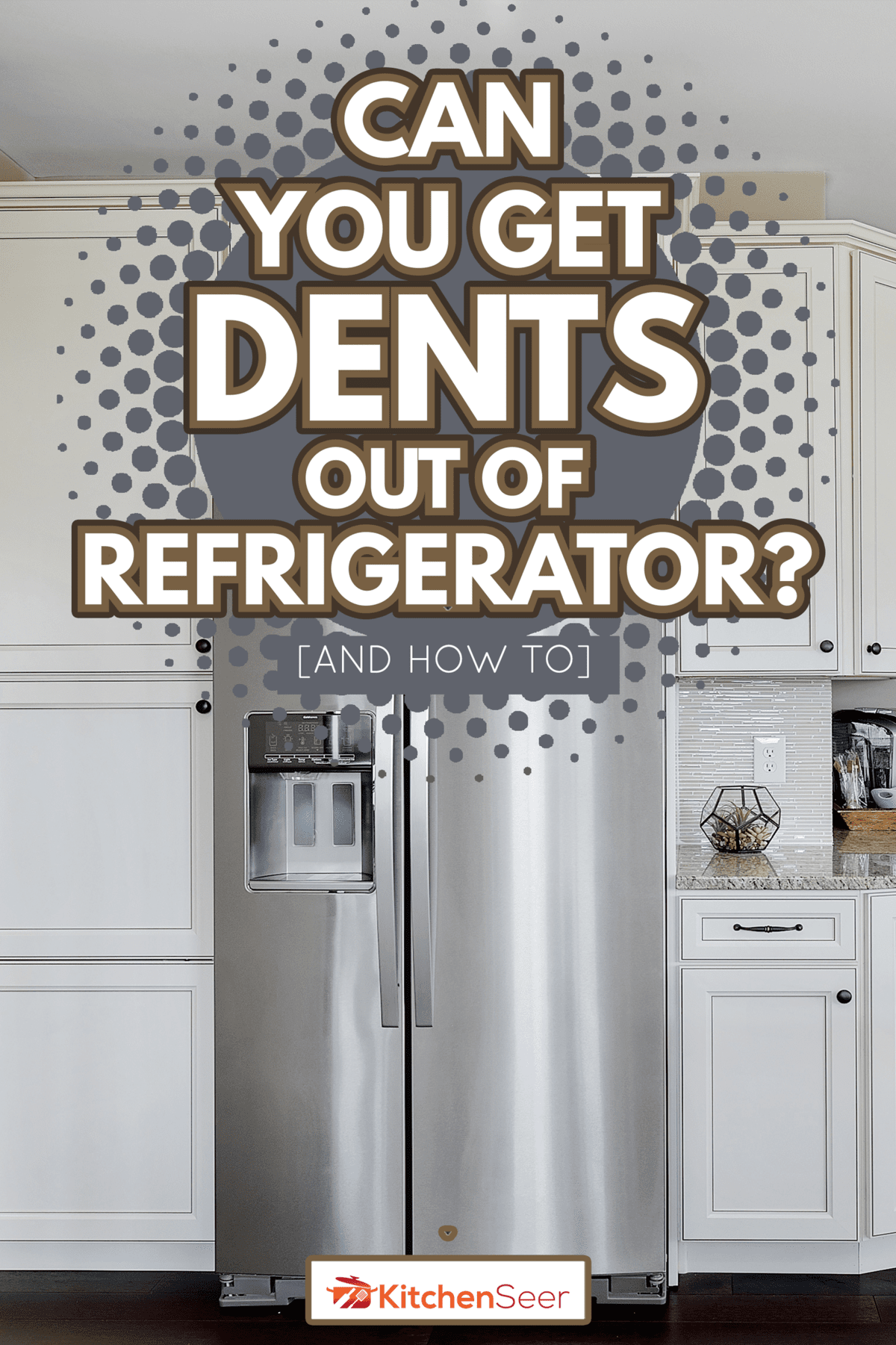 Can You Get Dents Out Of A Refrigerator? [And How To] 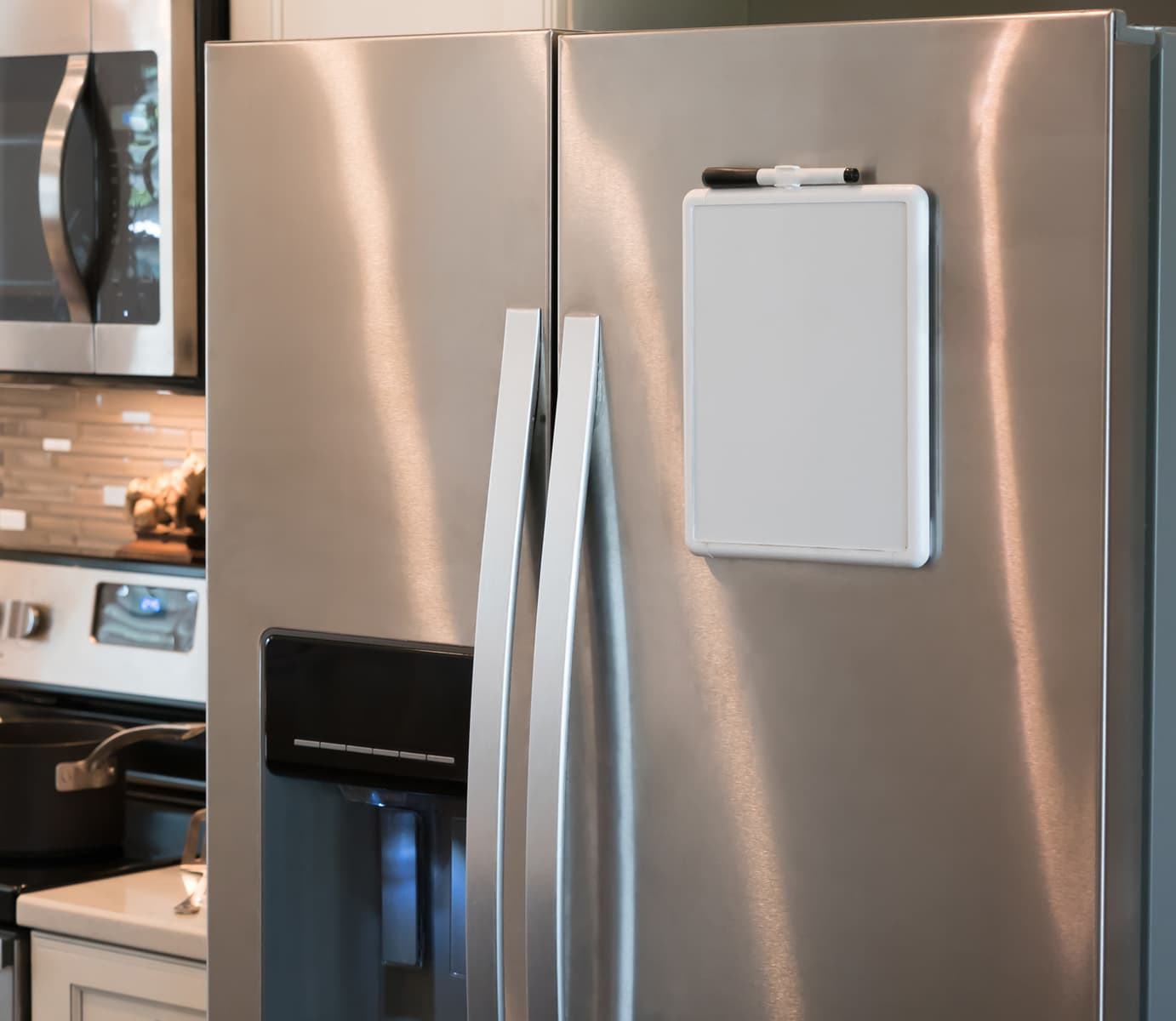 There are two main categories of methods for removing dents from a refrigerator. The first category of methods involves contracting the metal to force the dent back to its original shape. The other techniques involve pulling the dent out. Let's look into each of these methods to see how they compare.

The most famous method for removing a dent from a refrigerator uses dry ice. When metal cools, it also contracts, which can remove the dent.

Take a piece of dry ice and hold it against the dent in your refrigerator. Be sure to use gloves when handling dry ice. As you hold the dry ice against the dent, the metal should begin to contract, and the dent should pop back into shape.

Another method of removing the dent from your refrigerator, which doesn't use dry ice, uses a hairdryer and a can of compressed air.

First, heat the dent on your fridge so that the metal expands. Next, take the can of compressed air and spray it on the dent while holding the can upside down, and this will quickly cool the expanded metal popping the dent back into shape.

Pulling Out The Dent

The following method is a little less technical than the last methods. This involves taking something that can suction to the refrigerator and pulling in to pop the dent into place.

One method is to use a toilet plunger. If your plunger is has a sufficiently firm grip on your refrigerator, you can pull on it to pop your dent back in place.

Another way to get a good suction on your refrigerator is to buy a dent remover from an auto shop. These are designed to remove dents from vehicles and work great on refrigerator dents.

How Much Does It Cost To Fix A Dent In A Refrigerator? 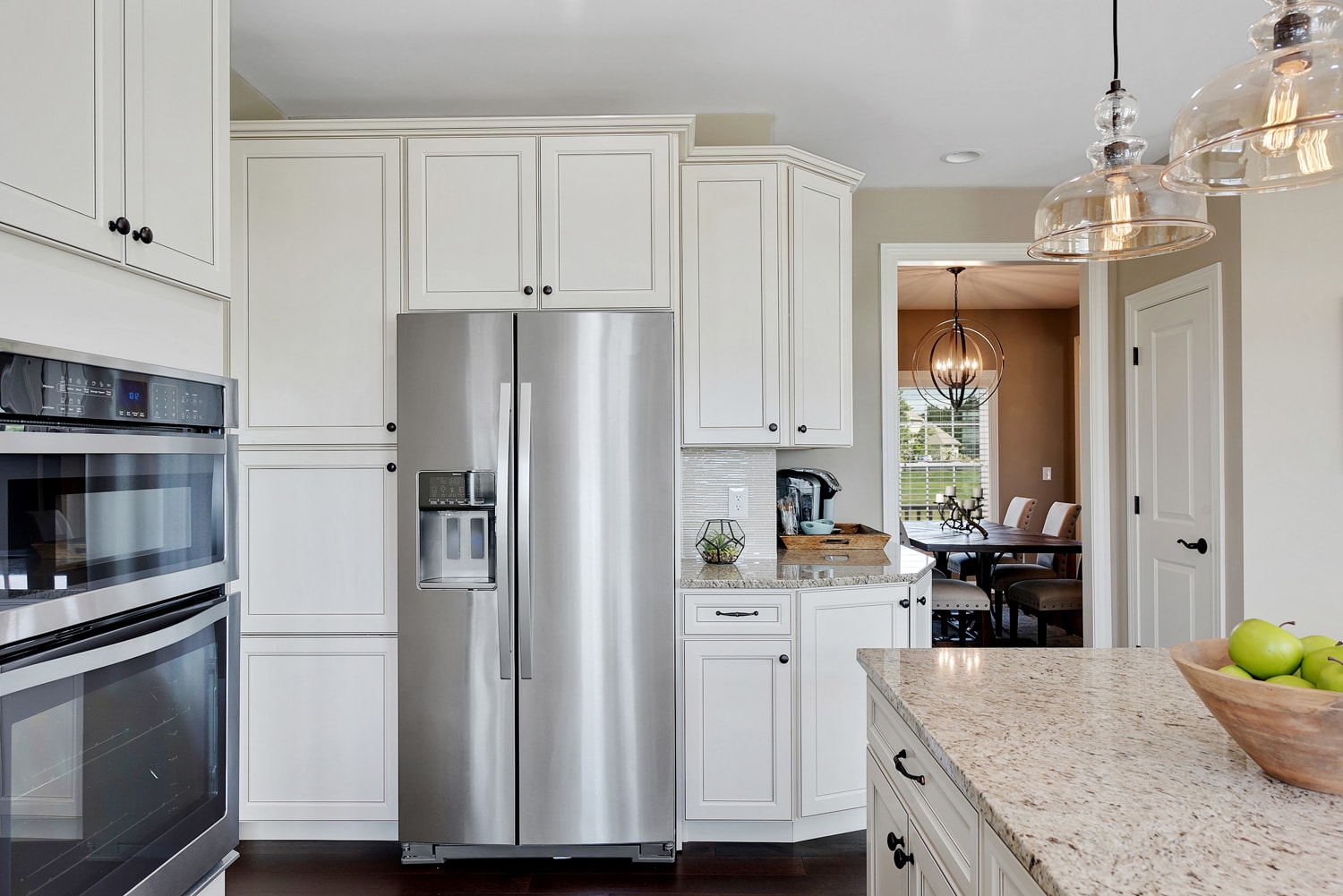 If fixing the dent in your refrigerator doesn't sound like a job you want to do, then perhaps you should consider hiring someone to fix the dent. This may have you wondering how much you can expect it to cost to repair the refrigerator dent.

The exact price will vary with different companies, but, typically, the size and depth of the dent will determine how much it will cost to fix.

Minor dents are any dent less than a foot across and don't damage any critical parts of the door. These vital parts include the hinges and ice dispenser.

These dents can be easily repaired and often don't cost much to fix. Depending on its size and location, a small dent will likely cost between 80 and 150 dollars to repair, and a hard-to-reach dent will cost more than an easily accessible dent.

A large dent is larger than a foot across or has damage on the door hinges or the ice dispenser. A dent of this nature will cost more to repair due to the increased work needed to fix it.

Repairing a large dent will cost between 150 and 250 dollars. If the hinges need to be repaired, it can add 50 dollars to the repair price. Replacing the ice dispenser panel can run an additional 250 dollars.

If both the hinges and ice dispenser needed to be repaired on a refrigerator door with a large dent, it could cost up to 550 dollars.

How Much Does It Cost To Replace A Refrigerator Door?

If the dent in your refrigerator is significant and damages the ice dispenser, it may be cheaper to replace the door. It is cheaper if the ice dispenser is damaged because replacing it doubles the repair price.

Is It Cheaper To Repair Or Replace A Refrigerator? 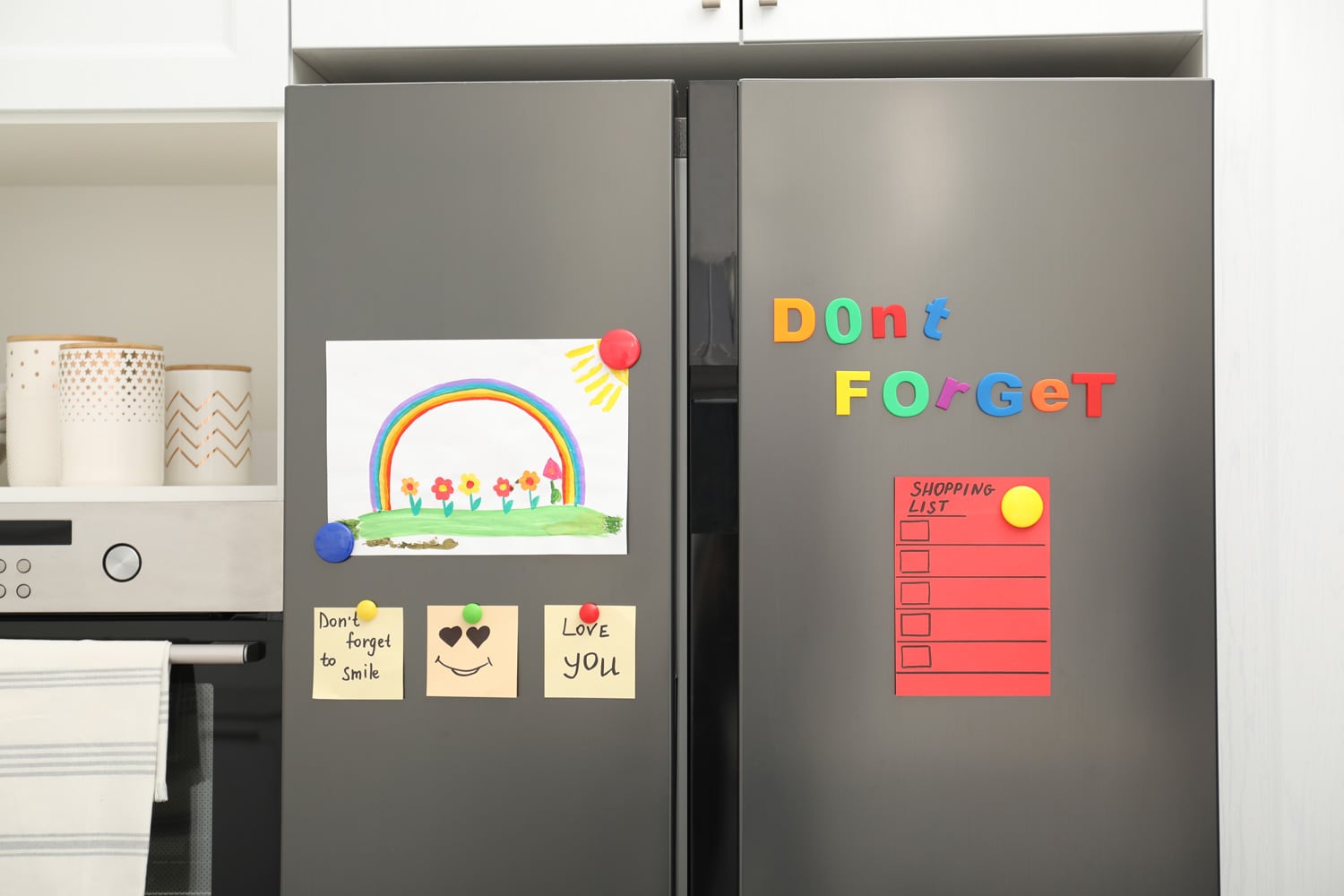 As it turns out, several critical components on a refrigerator can be repaired instead of replacing the fridge, which can save hundreds of dollars.

One common repair you can make to your refrigerator instead of replacing it is replacing a faulty thermostat. When people notice that their fridge no longer keeps the correct temperature, they often spring for a new fridge. Often the only wrong thing is the thermostat needs to be replaced.

Different refrigerators will require different thermostats, but here is an example of a standard fridge thermostat available on Amazon.

These thermostats can cost between 10 and 20 dollars and save hundreds by keeping your current fridge running well. 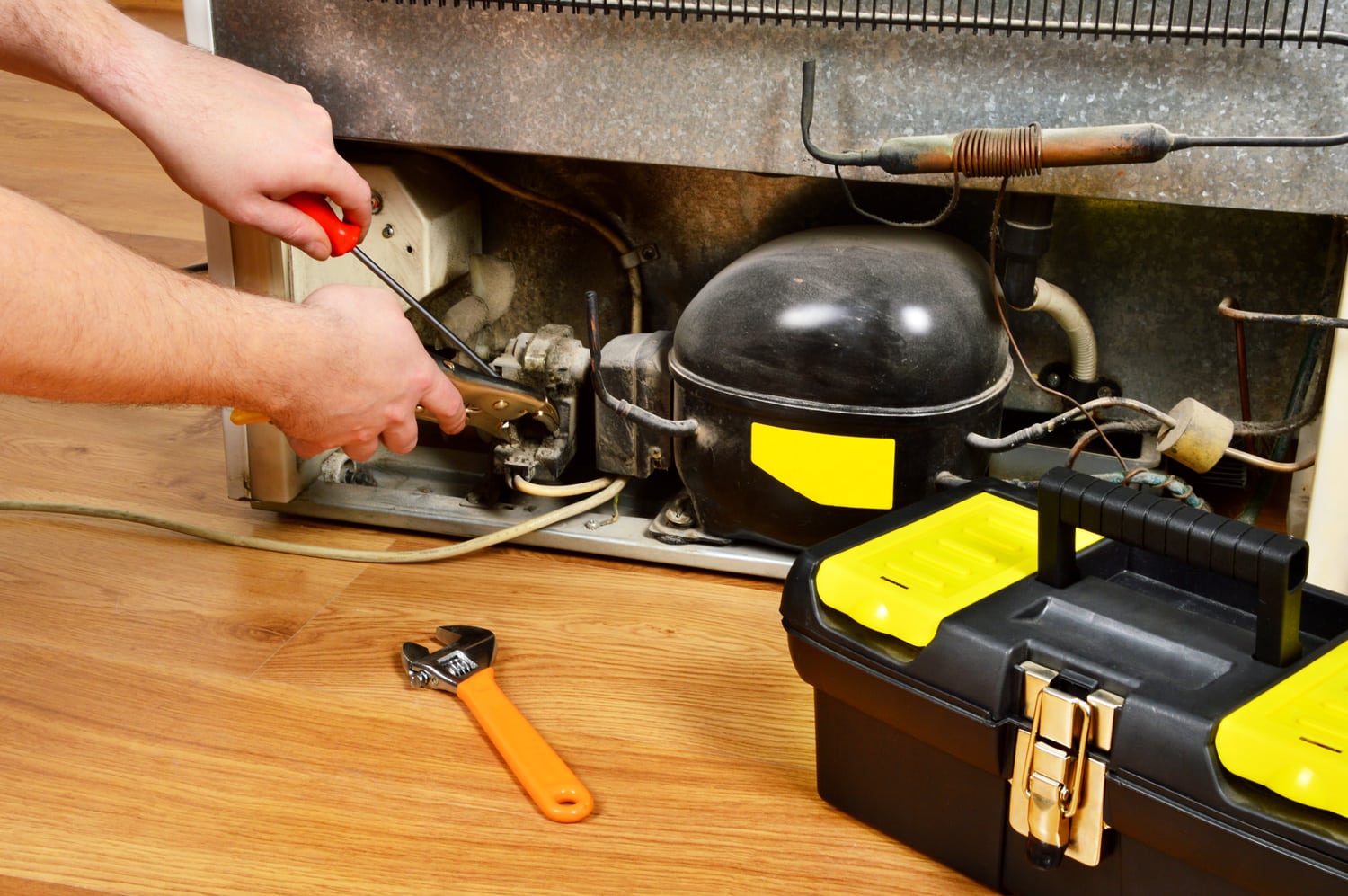 If you notice that the ice maker in your refrigerator won't dispense ice, it doesn't mean it's time for a new fridge; it means you need to replace the ice motor.

Different refrigerators will use different-sized motors for their ice buckets. Here is an example of a typical refrigerator ice bucket motor available on Amazon.

These motors can cost between 60 and 120 dollars depending on the one you need for your refrigerator but will be hundreds less than a new fridge.

Replacing The Control Board

If you find that your fridge seems to not function at all anymore, it may be that a power surge has damaged your fridge's control board. While this may cause you to think you need a new fridge, you can replace a fried control board.

While replacing your refrigerator's control board can be done at home by yourself, hire someone to do it for you instead of damaging your fridge if you are uncomfortable with the repair.

Depending on your fridge's make and model, a new control board will cost between 75 and 200 dollars, and this is significantly less than replacing your whole fridge. It could cost an additional 50 to 100 dollars if you hired someone to install the control board for you.

As you can see, if you repair your refrigerator's parts as needed, you can save money by not needing to replace your fridge.

This article taught that you could get dents out of a refrigerator using either contracting the metal or pulling the dent out. We also learned it costs between 80 and 550 dollars to hire someone to repair a dent depending on how big the dent is and how many critical parts of the door are damaged.

Remember, it is often cheaper to repair your refrigerator than replace it.

Does The Refrigerator Water Filter Affect The Ice Maker?

How To Remove Scratches From Stainless Steel Refrigerator Door

Does A Refrigerator Need A Dedicated Circuit?

Can You Plug A Fridge Into A Surge Protector Or Power Strip?