Trying out new recipes at home can be confusing without the right information. Do you want to try making hamburgers from scratch but don't know whether to double grind the meat? Is it okay to only grind hamburger meat once before preparing it?

We will answer these questions and many others throughout this post. Let's discuss!

It is generally best to double grind hamburger meat, as this will ensure it has a good, cookable texture. Sometimes, only grinding hamburger meat once results in chunks and less flavor, so we recommend a second grind.

Furthermore, giving your hamburger a double grind will activate the protein better, which helps it to stick together on the grill.

As we start, we will cover all things hamburger meat and discuss whether it's best to single or double grind. If you're new to cooking hamburgers, consider yourself a pro, or are simply curious, you're at the right place. With that said, let's dive right in! 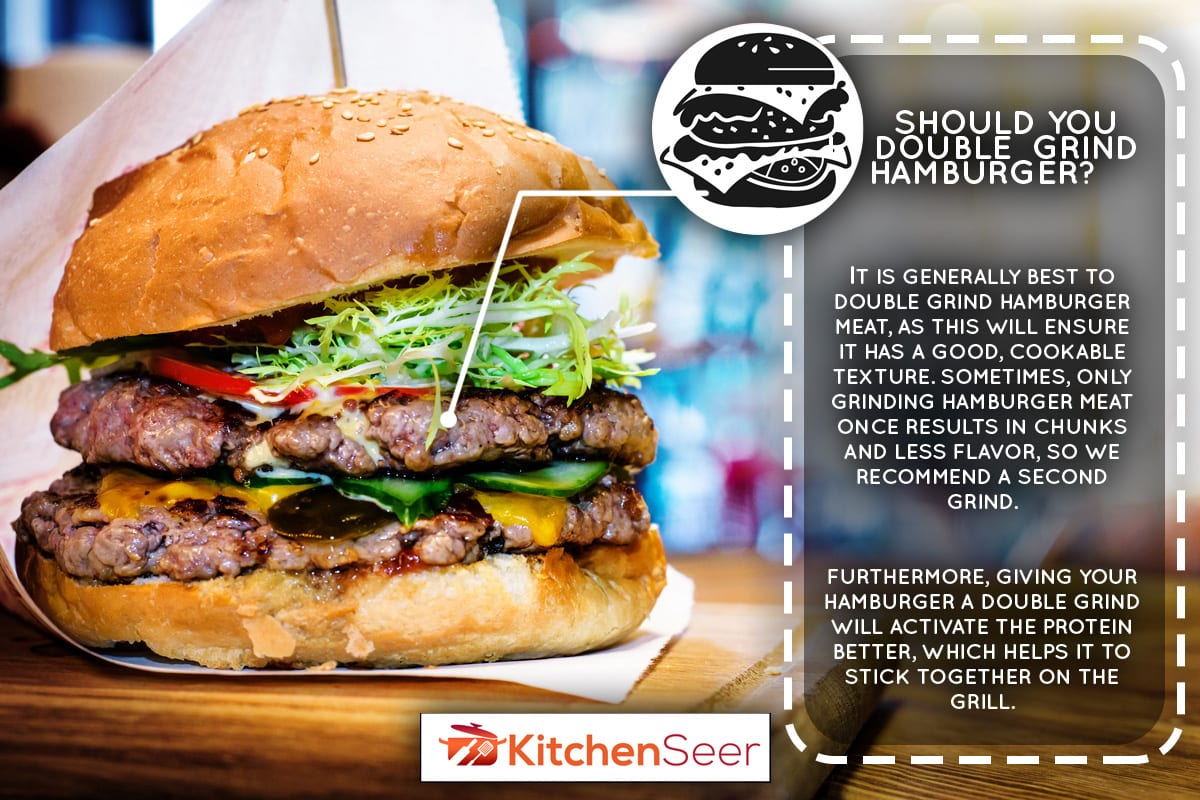 Should I Double Grind Hamburger Meat? 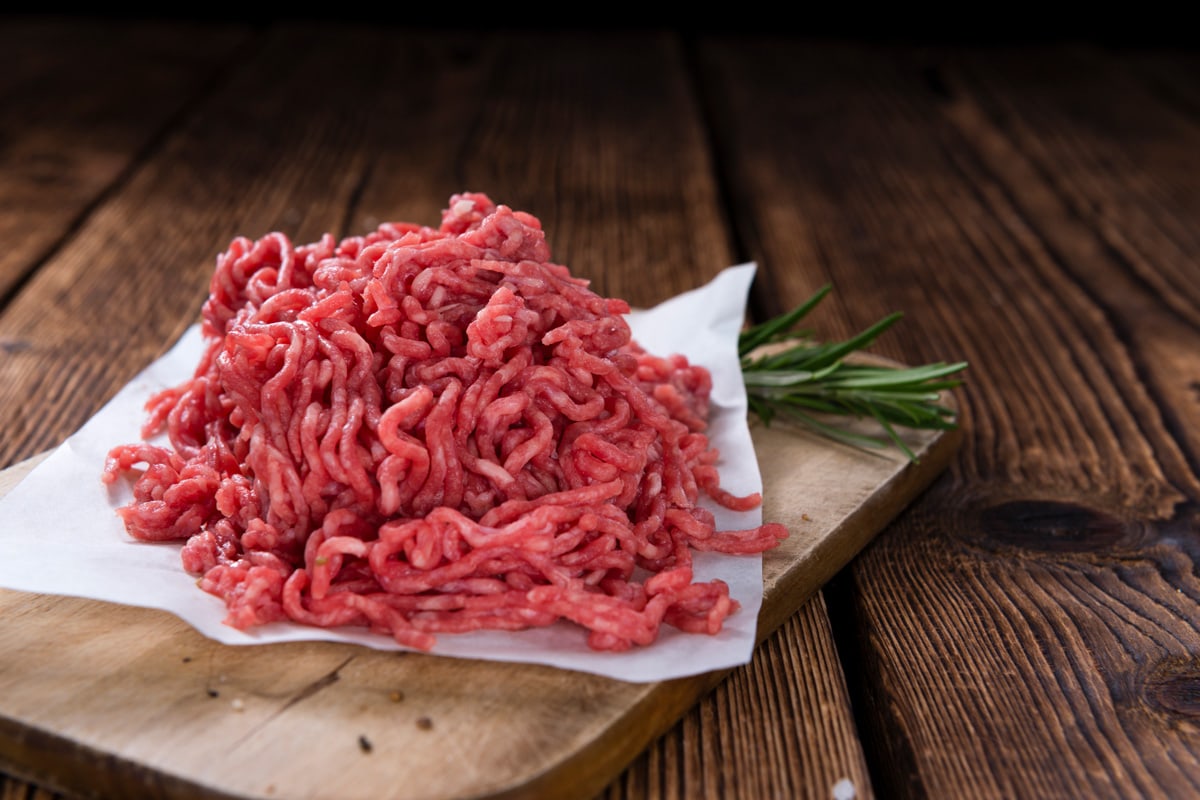 Yes. It is a good idea to double grind your hamburger meat while cooking. As we mentioned, doing this can help improve your hamburger's overall consistency and flavor.

In addition, grinding hamburger meat twice versus once will activate its proteins and keep it from crumbling. Your meat will also have better flavor if it grinds twice, so this is a good habit to form.

According to Weber, giving a hamburger a double grind will ensure a moist and consistent flavor/texture.

This also helps during the grilling stage of your meal prep, so everything is affected by this. So, if you want your hamburgers to be a smash hit, we think it's better to go in for that second grind.

What Is The Best Way To Grind Hamburger Meat?

For those of you ready to grind, there are some steps to consider. Most importantly, you want to minimize smearing.

Therefore, we recommend cutting your hamburger into 1-2 inch chunks. Place them in a single layer on a sheet tray/plate in the freezer for roughly 15 minutes.

You want to let your meat set in the freezer, which also helps prevent crumbling on the grill. When 15 minutes are up, you can take your hamburger out of the freezer and get to grinding.

Ideally, you don't want to grind more than a half pound of hamburger for a 10-cup food processor, so keep that in mind.

On top of that, many experts like Bobby Flay recommend asking your local butcher for beef trimmings to mix into your hamburger during the grinding process.

The extra fat will help with texture and flavor. Again, everyone is different, so you don't necessarily need to do this for your meal.

Should Meat Be Cold Before Grinding? 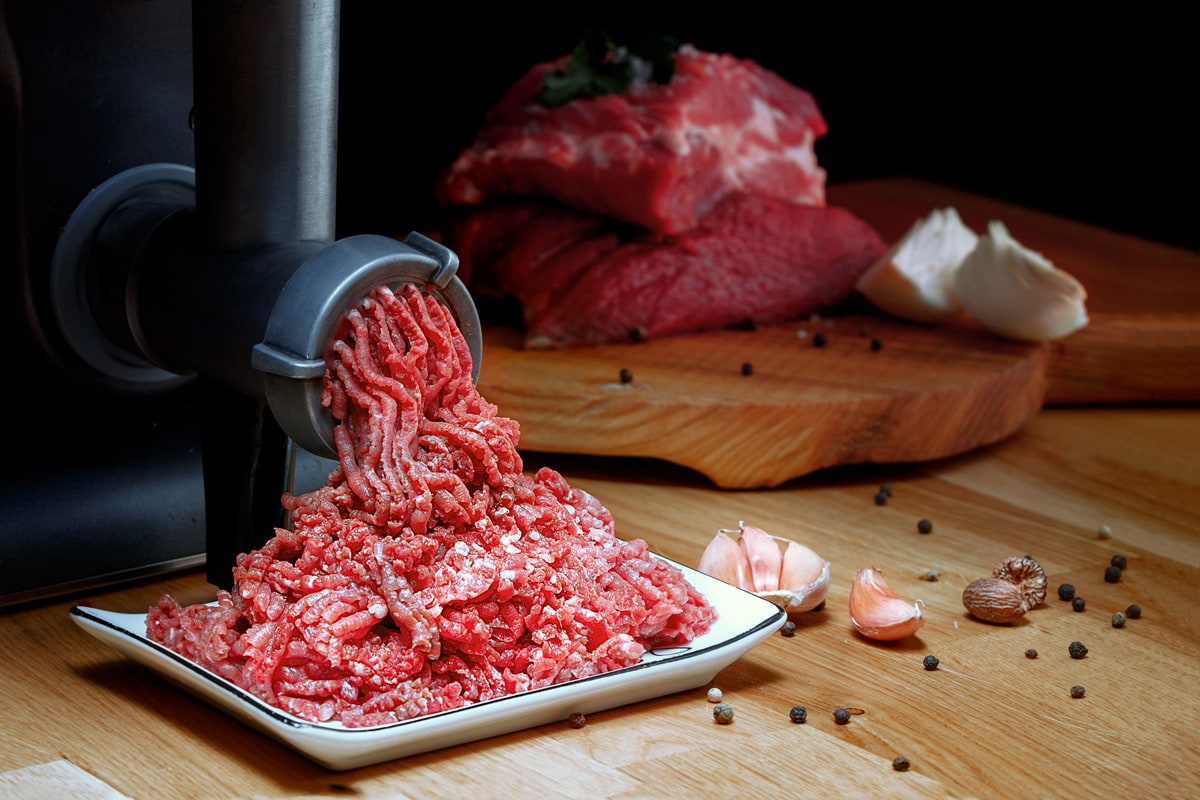 Yes! Keeping your hamburger meat and equipment cold before/while grinding is critical. This applies to any grinding method, whether it's one or two times.

In general, cold meat won't smear once you place it on the grill, hence why room temperature isn't going to cut it. Also, you don't want your hamburgers to lose their shape during the prep process, or you'll have a lackluster final product.

According to ThermoWorks, when meat becomes too warm, its fat and connective tissue become loose, often causing your hamburger meat to become unusable on the grill.

As we covered above, you want to put hamburger meat into the freezer for 15 minutes before grinding. Again, you don't need to freeze the hamburger entirely, but giving it some time to harden is helpful.

Can You Grind Frozen Meat?

From a food safety standpoint, grinding semi-frozen hamburger meat is a better option. Usually, the colder and firmer your hamburger, the better it will grind and grill, so freezing it is a good idea.

That said, you don't need to grind fully frozen meat that's been in the freezer for weeks. Even allowing it to sit in the freezer overnight and then moving it directly to the grinder is an option to consider.

You want to try and keep your meat as firm as possible before the grind. This way, it will move through the processor quicker and won't smear or fall apart.

Experts also suggest that semi-frozen meat will stay firm and make less mess during the grinding process, which is a big advantage.

That said, keep your equipment and meat below 40 degrees Fahrenheit.

What Happens If I Only Grind Hamburger Meat Once? 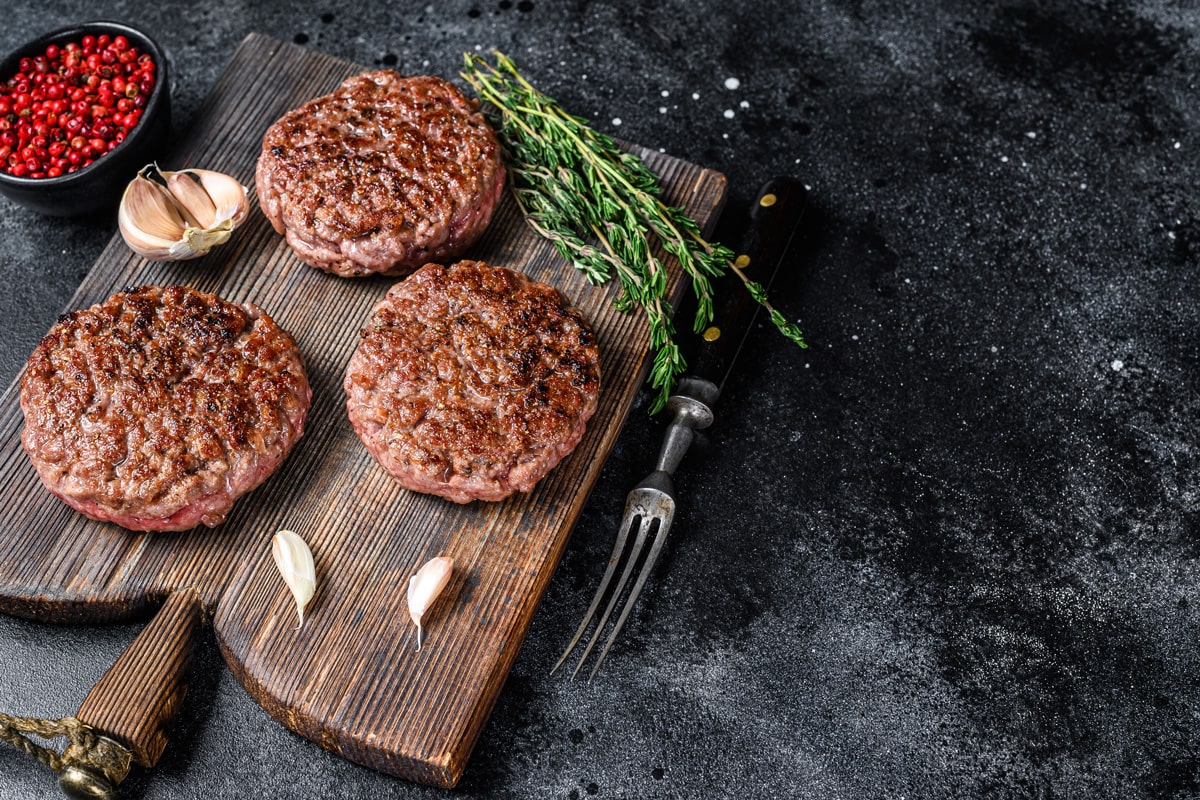 Suppose you don't want to grind your hamburger two times. Although this won't necessarily ruin your meal, grinding once versus two times isn't always as good.

For example, many chefs claim that after the first grind, their hamburger is still too coarse and challenging to work with on the grill.

On top of that, if your hamburger meat is too warm and your only grind it once, there's a higher chance of smearing and crumbling once it's time to cook.

Therefore, running your cold hamburger through the grinder is generally a better choice. Yes, this will take some extra time, but think about how good your final meal will taste!

Many new meat grinders will also be easy to maneuver and don't require you to do much work, so if you have a modern version, the second grind may not even be an issue.

How Long Does Ground Beef Last After Grinding?

Once you grind your hamburger, it's time to cook or store it. You can usually expect ground hamburger meat to last 1-2 days in your fridge, so time is of the essence.

Therefore, it's better to cook it right away rather than hold off.

However, freezing is another option if you don't plan on preparing it right away. As we said, freezing ground beef can pause its condition/quality until you're ready to use it.

On top of that, storing beef in the refrigerator isn't always so easy. For example, your meat can spoil if the inside of your appliance is not cold enough.

So, you could have to throw away all of the meat you ground, which would be a big waste.

Can You Eat Ground Beef After 5 Days?

If it's been five days since you put your hamburger into the fridge, we do not recommend eating it. As we covered above, ground beef can usually stay refrigerated for 1-2 days before you need to use it.

In contrast, frozen ground beef can be stored a bit longer, so that is a better choice if you don't want to cook your hamburgers right after grinding them.

Medical News Today claims it is safe to consume frozen ground beef up to four months post-freeze, while hamburger in the fridge needs to be eaten within 48 hours.

Not only is eating spoiled beef unsafe, but it will also taste very bad. Generally, you can tell if ground beef is past its due date by inspecting it for any discoloration or foul smells.

Spoiled hamburger meat tends to turn grey once it spoils, so that's an easy indicator.

In addition to color, bad beef will also have a slimy or sticky texture, which is not typical for meat. So, if your beef has been in the fridge for more than 24-48 hours, we recommend throwing it away regardless.

How Long Does It Take To Grind Hamburger Meat? 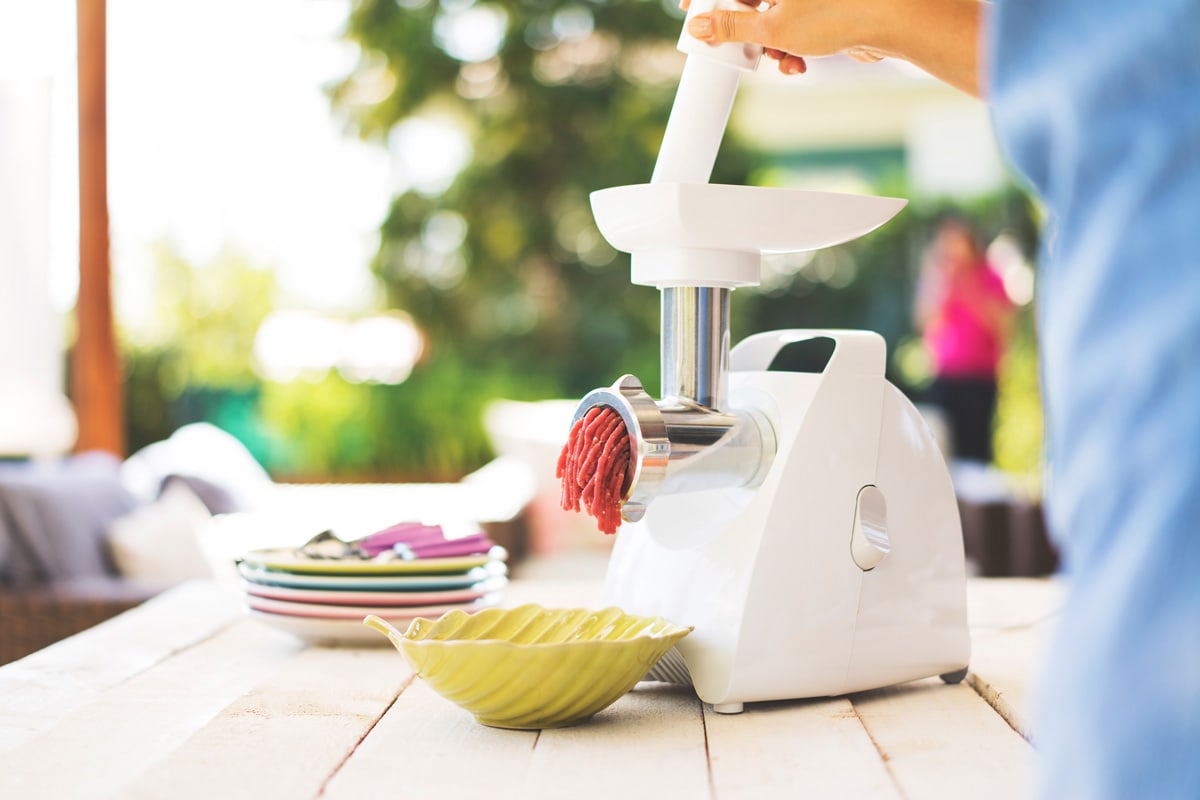 It shouldn't take more than ten or 15 minutes to grind hamburger meat twice. Since doing this is pretty easy, you won't need to spend hours in the kitchen.

Of course, remember 15 or so minutes in the freezer before grinding your hamburger, so in total, this will take about 25-30 minutes.

Your equipment will also impact the total cook time for your hamburger. As we said, you want to ensure your meat and equipment stay below 40 degrees Fahrenheit to prevent a mess and a less-savory meal.

If this is your first time grinding hamburger meat, don't worry about time, but rather try to be careful and follow the steps we give throughout this post.

Should You Season Hamburger Meat Before Grinding?

According to StackExchange, having a bit of seasoning on a pre-ground hamburger can help it become more even in texture.

With that said, you don't want to get crazy with herbs and spices before the grill. Sometimes, it's best to allow your meat to be raw and untouched before the grinding process to keep its shape.

Hence why we said "dry" seasoning beforehand is okay.

Anything extra like diced veggies or wet sauces needs to wait until the grilling portion of your hamburger making. You can also wait until right before the grill to add any seasoning to your meat, as this allows the grill to work its magic.

To Wrap It All Up

Whether you love cooking hamburgers from scratch or haven't tried it, it's always good to follow proper protocol. We found that it is generally better to double grind a hamburger, as this allows for more flavor and better consistency when it comes time to grill.

In addition, you also want to keep your meat and equipment below 40 degrees at all times during the grinding process. If your hamburger gets too warm, there's a higher chance of crumbling and smearing.

Regardless, you want to try and cook ground beef as soon as possible, and don't be afraid to try freezing yours if you need it in the next few weeks/months.

Made it this far? Check out these other helpful kitchen posts below!

Types Of Hamburger [Everything You Ever Need To Know]

How Long Do You Fry Or Grill Hamburgers On Each Side?

Can You Make Gravy With Heavy Cream Instead Of Milk?

Best Meat Grinder For Chicken Bones – How To Choose?

At What Temperature To Bake Pork Chops?