If you’re planning a fondue, making homemade Mac and Cheese, or you just want perfectly melted Swiss on your burger, you’re probably wondering which types of Swiss cheese melt. Well, we’ve done a thorough search on the internet to help you learn to melt Swiss cheese to perfection!

The older your cheese, the longer it will take to melt because there is less milk fat; the milk fat in cheese begins to melt at 90°F, but the casein (protein) does not melt until it reaches between 130°F - 180°F.

So, does this mean that you can’t melt certain types of Swiss cheese? Yes, you can! We’ve gathered all of the best information from the internet here to help you in your quest to melt any type of Swiss cheese for any recipe you want. Read on about melting Swiss cheese!

To Melt or not to melt 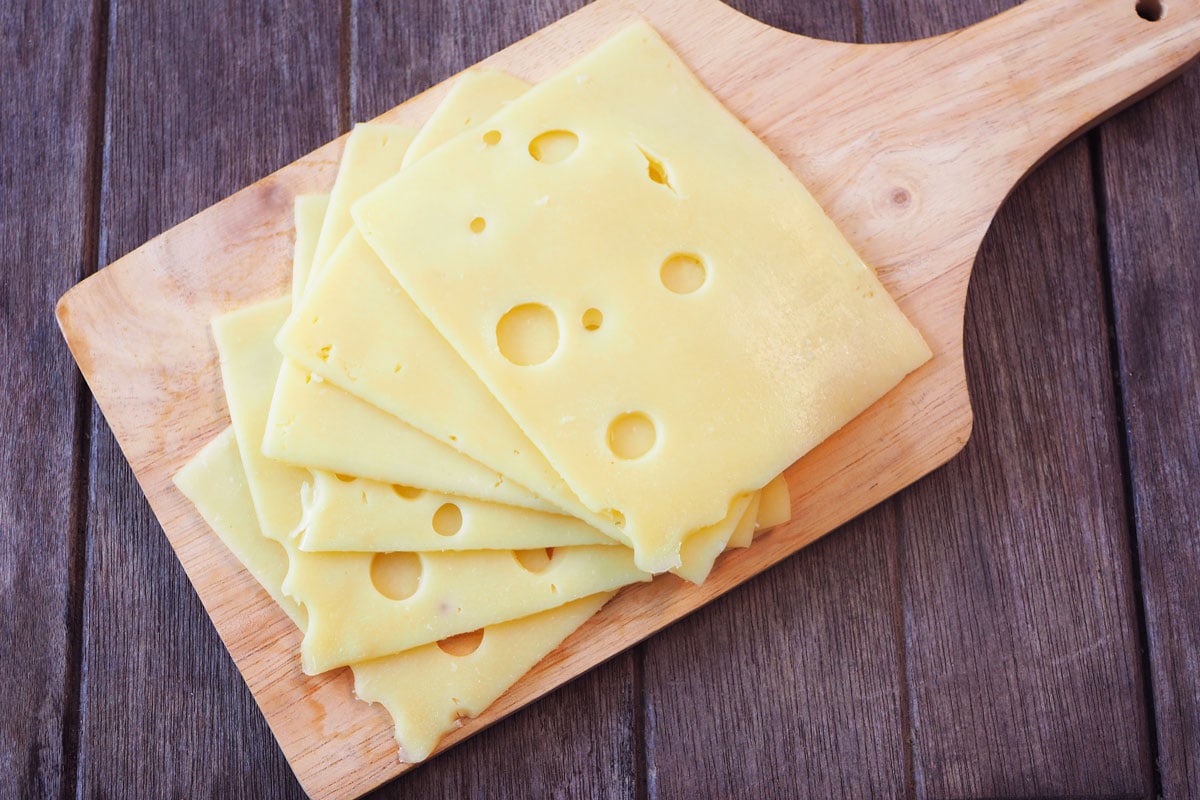 As you’ve probably experienced countless times, some cheeses melt easily, and some do not. So how do you know which cheese will work for your recipe?

Use this rule of thumb: Aged Swiss cheese - or any aged cheese - will not only need a longer time and higher temperature to melt properly, but it may also need the addition of milk fat to create the perfect melt. 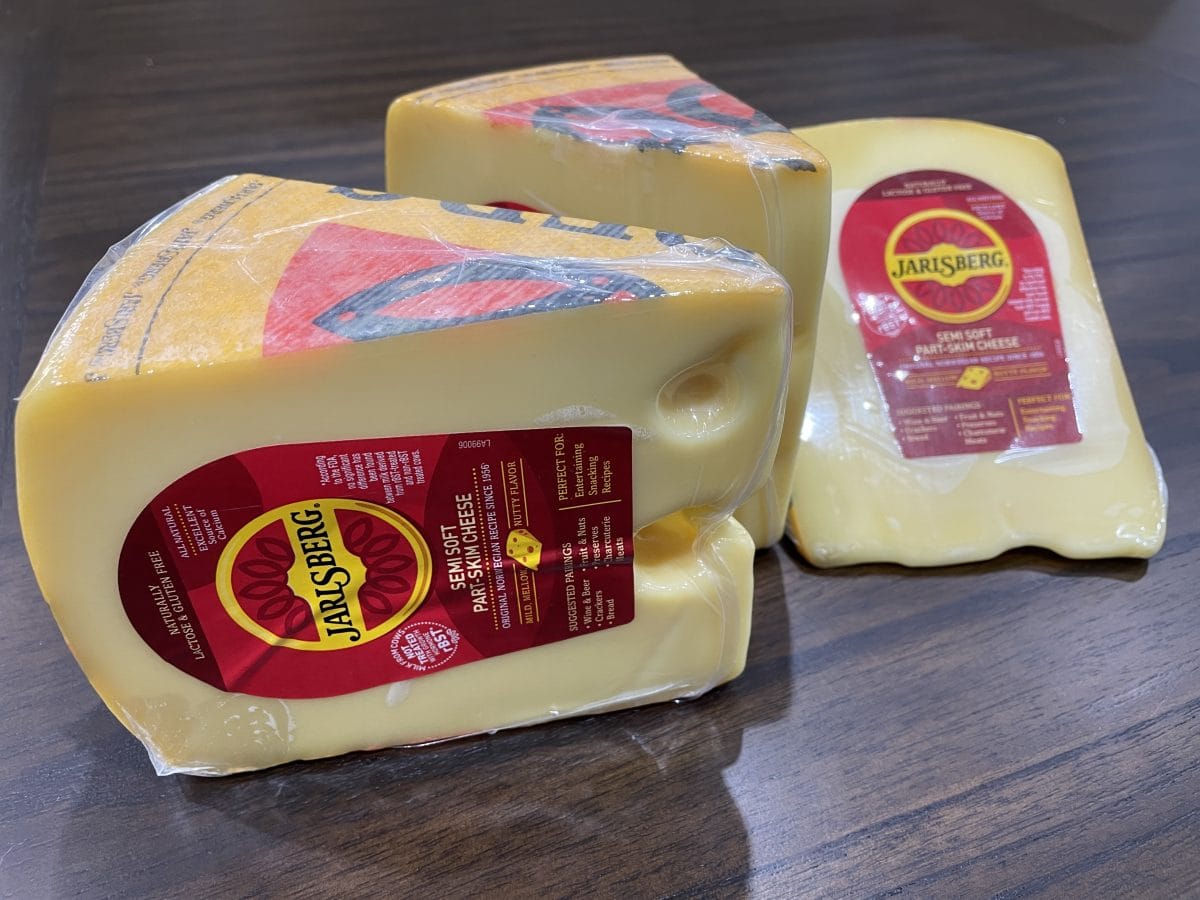 Above, a classic brand of Swiss, cut from huge wheels and great for melting.

Cheese contains little groups of proteins called casein which surround globules of milk fat. Together, they keep the cheese solid. When cheese is heated, the milk fat starts to melt, and the casein proteins lose their structure and spread apart within the milk fat - this is what we think of as melting.

So, since aged cheeses have less milk fat and more casein, such as aged Emmenthaler or Gruyere, they need a higher temperature to reach the melting point.

If the cheese is very aged, it has a lot less milk fat, and you will not see significant melting until it reaches a temperature high enough to affect the casein. 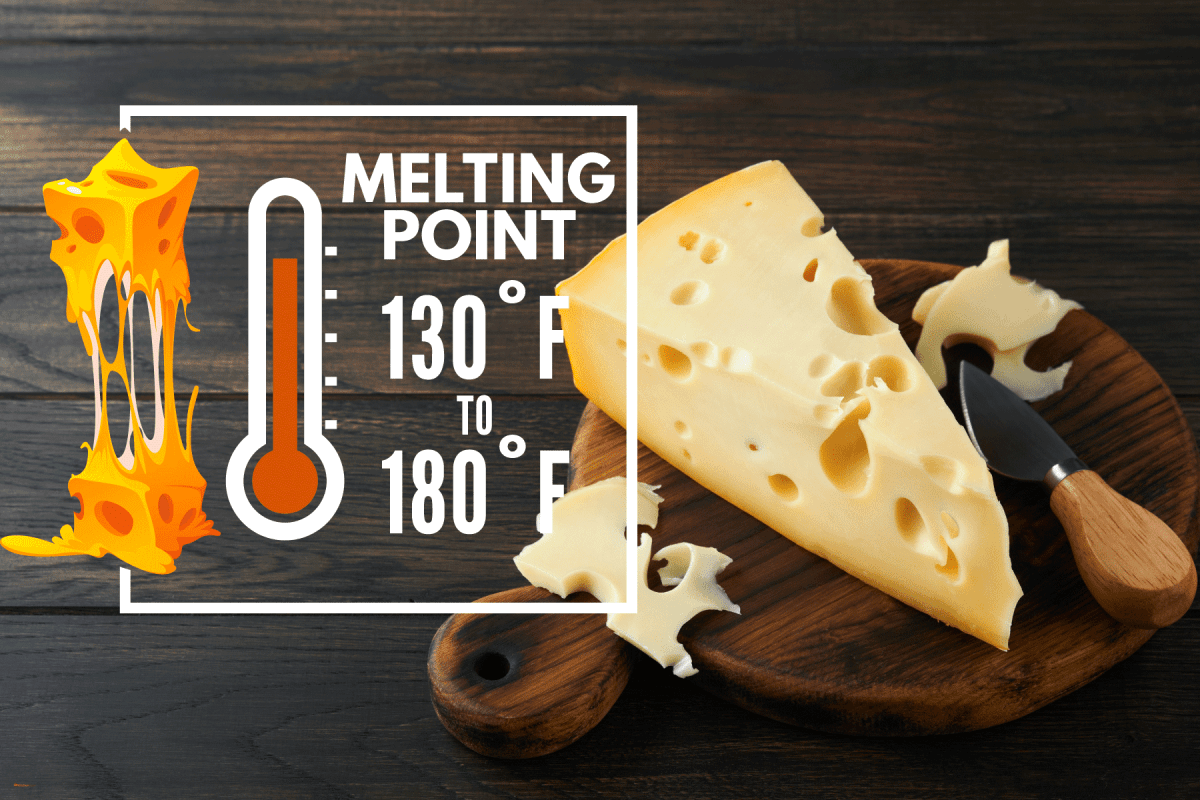 You may see little beads of ‘sweat’ on your cheese, this is the milk fat that has started to melt.

So how do you choose the right Swiss to melt?

Choosing the right Swiss for melting depends on how you’re going to use it.  So we’ve included a guide for which Swiss Cheeses are best for different recipes.

Baby Swiss is a young cheese, so it still has a lot of milk fat and will melt easily. It’s mild, slightly nutty, and works great for; 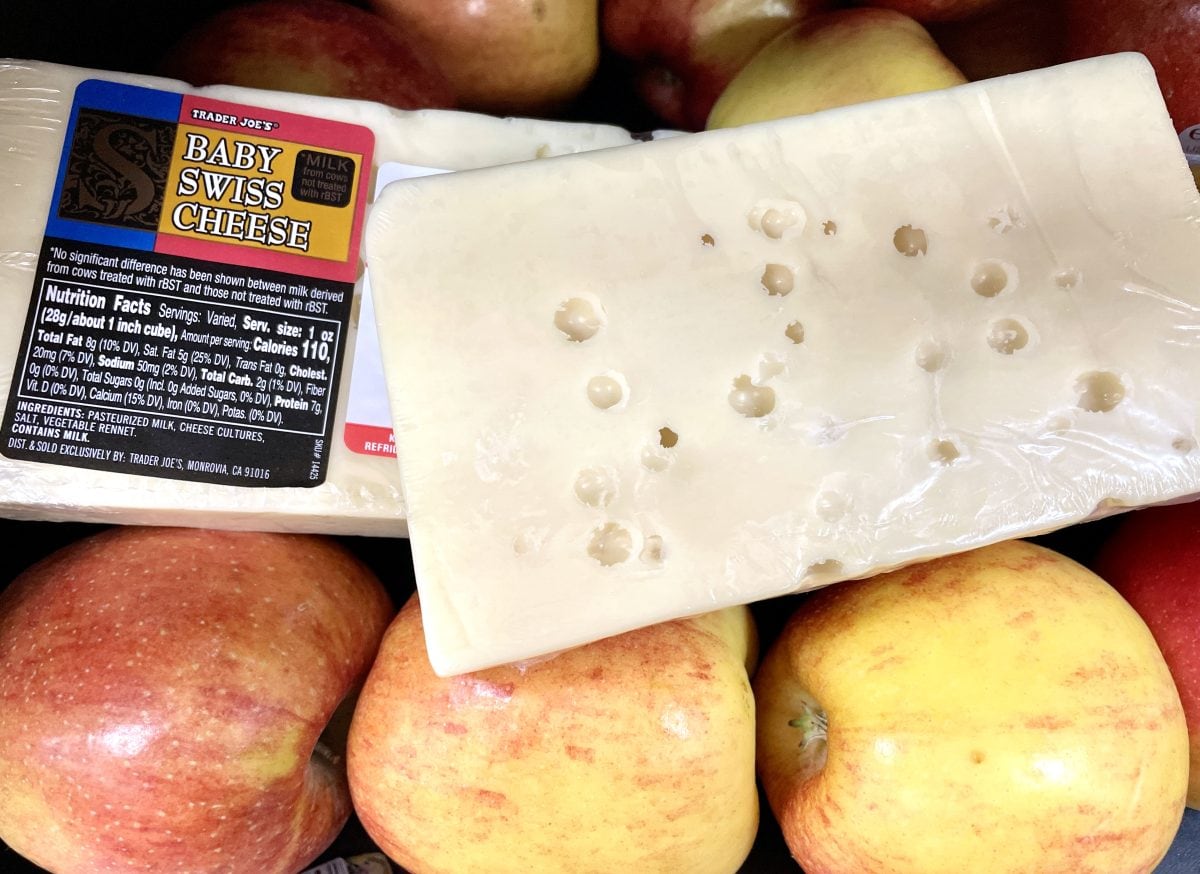 Baby Swiss is a mild swiss cheese that melts easily.

Tête de Moin - literally ‘Monk’s head’ - is another Swiss cheese that melts well. It’s aged about 2 1/2 months and has a rich, tangy flavor. It works great as;

Tête de Moin - pictured above - is scraped in a circle across the top to produce these beautiful, ribbon-like rosettes using a cheese curler - pictured below.

A cheese curler for Tête de Moin. See it on Amazon. 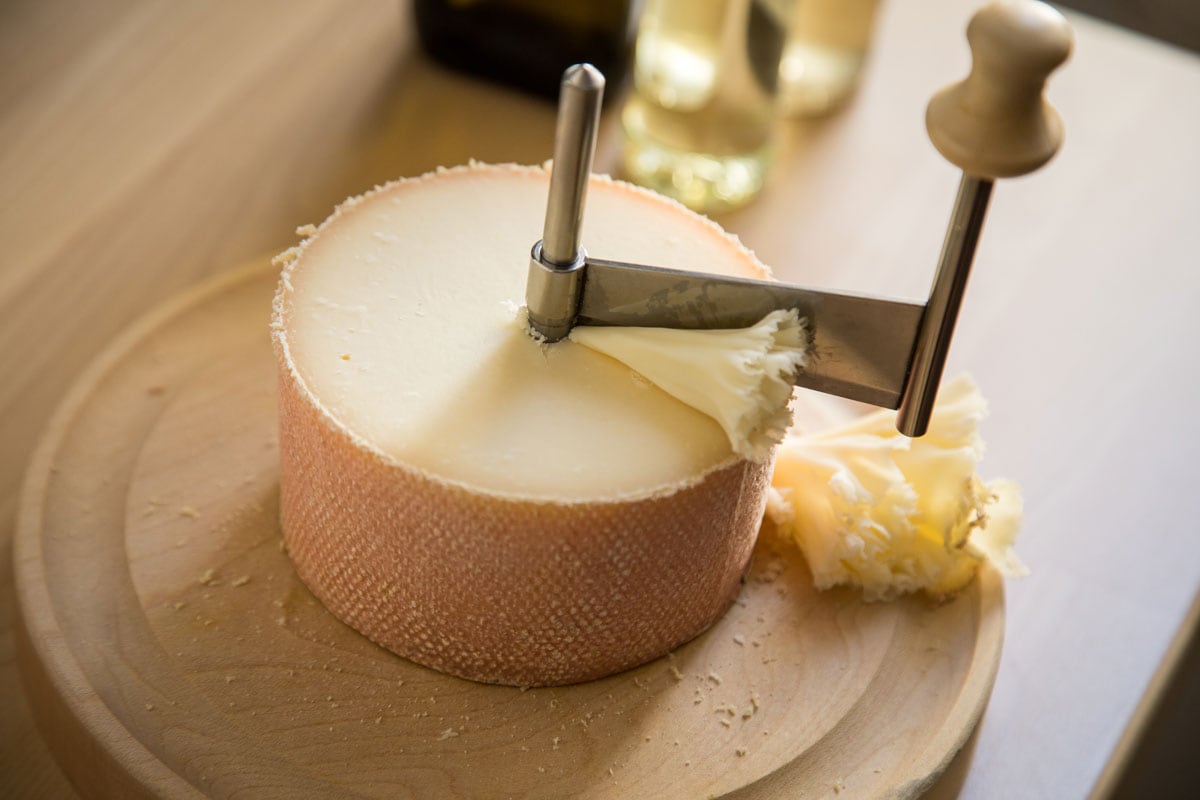 Arguably two of the most flavorful and rich Swiss cheeses, these cheeses are aged longer, so they contain less milk fat. But they’re easy to use in plenty of recipes! 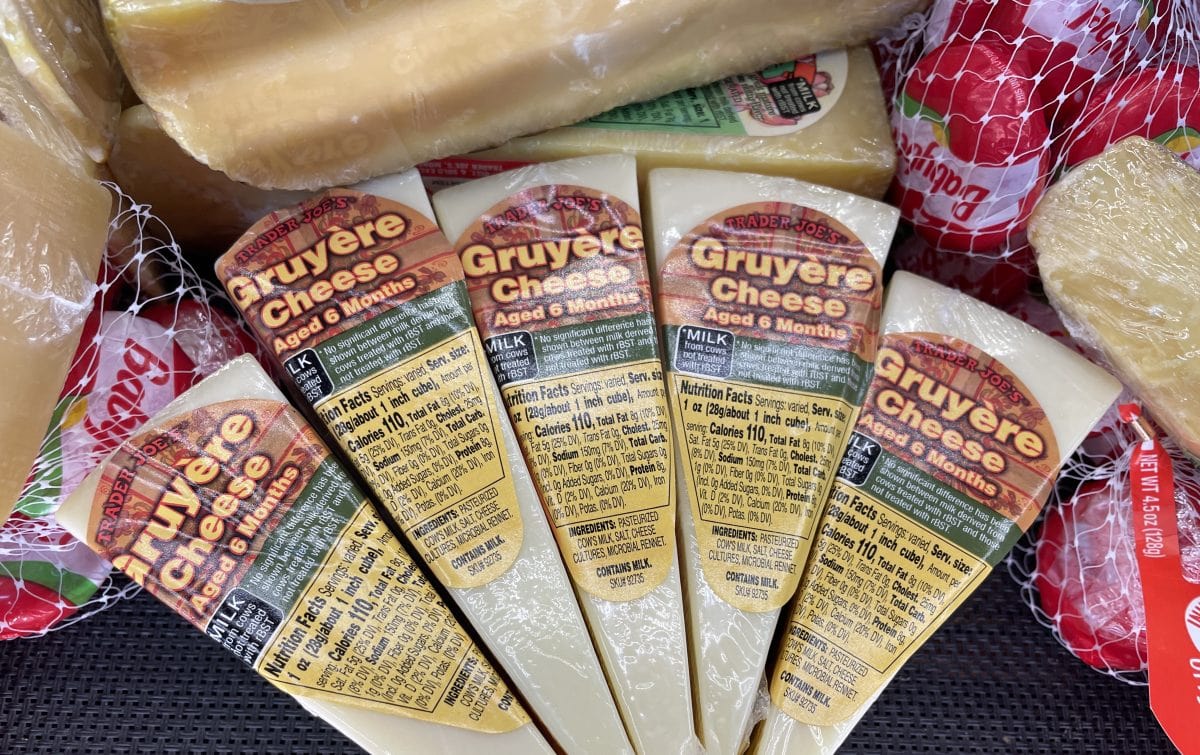 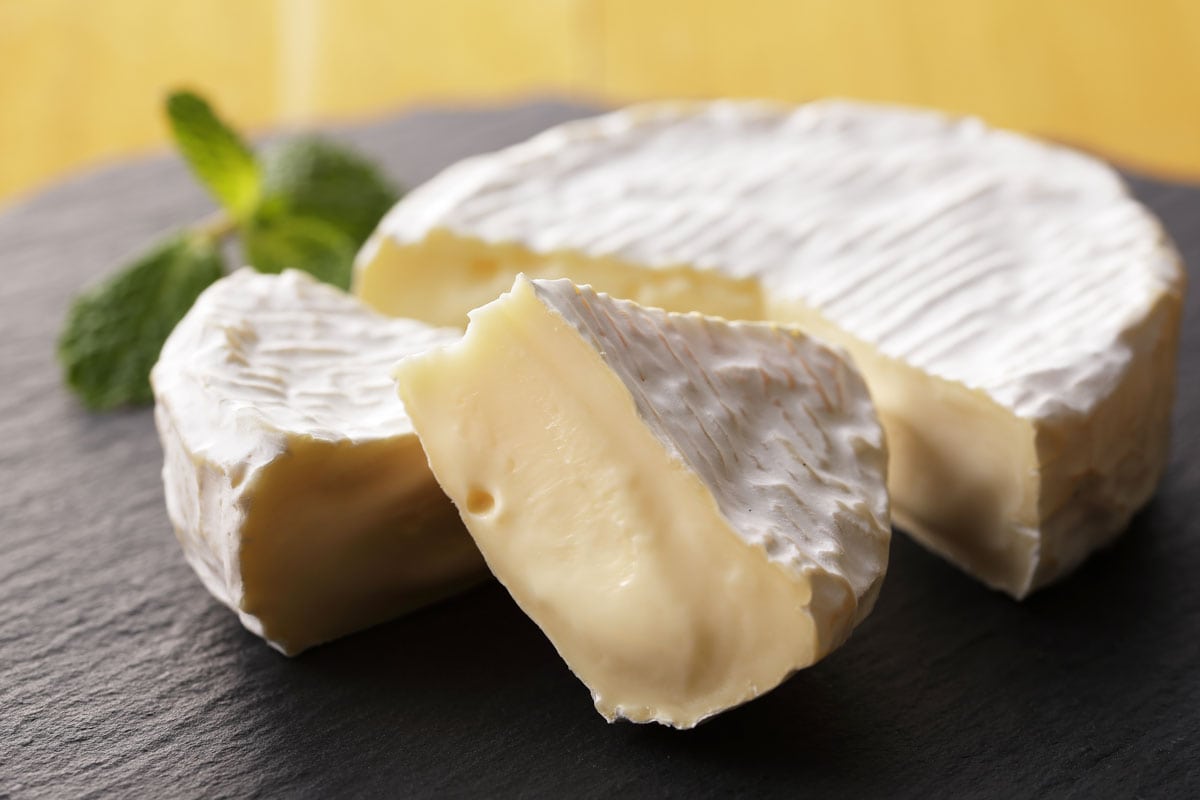 There are hundreds of other types of cheese you can melt. Just remember, combine aged cheeses in a Roux, or add more milkfat - like cream or younger cheese - to get the right melted ratio for your recipe. 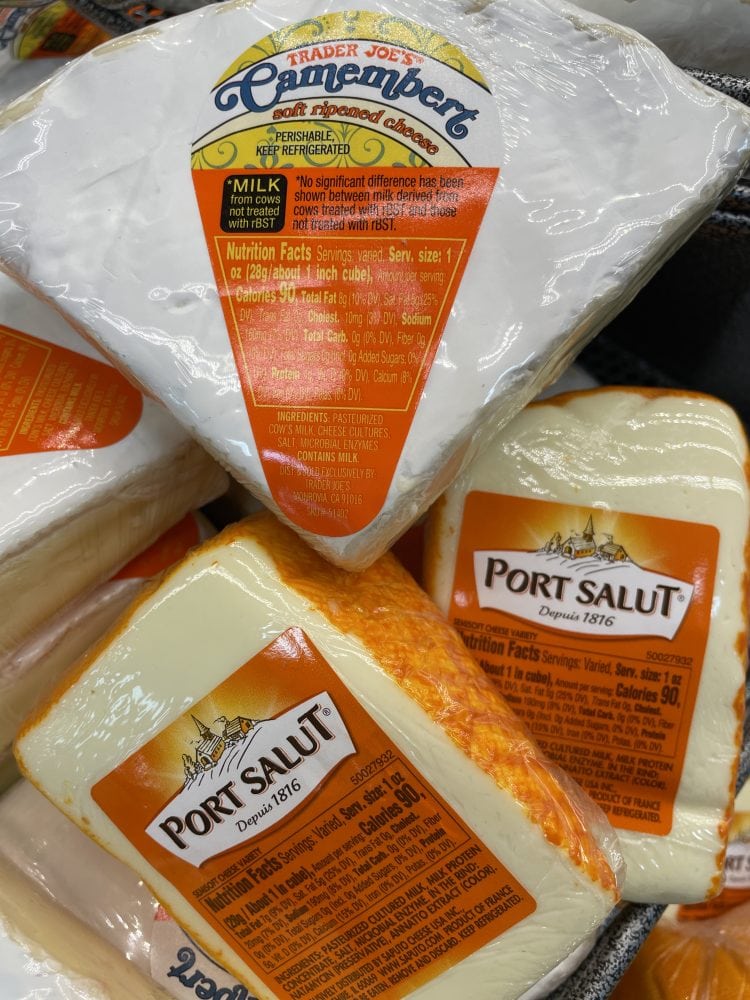 Why do some cheeses stretch when melted and others don’t?

As we mentioned above, cheese is made from protein particles called Casein surrounding cells of milk fat. But it’s the process of making the cheese itself that creates the stretchiness of cheese.

The pH of the milk, the temperature during processing, the amount of milk fat left in the cheese, the aging process, and how the cheese is formed all contribute to the stretch of cheese.

For example, Mozzarella and Provolone are two of the stretchiest cheeses around!  They are called ‘Stretched Curd’ cheeses, and this process, plus careful monitoring of the pH and heat during processing, keeps the casein proteins attached. This is how it stays stretchy when melted.

Above, careful processing of the mozzarella leads to perfect stretching.

Why does packaged, shredded cheese not melt well?

The answer to this question is that pre-shredded cheeses usually have anti-caking agents added to keep the shreds from sticking together.

These anti-caking agents - usually cellulose - are fine if you just want to sprinkle shredded cheese on a taco, but they won’t melt nicely. They create a physical barrier between the casein proteins in the cheese.

Casein proteins can’t attach to create a chain of melted cheese if cellulose is in the way. This is why you end up with a chunky mess when you try to use packaged cheese shreds in melted recipes. 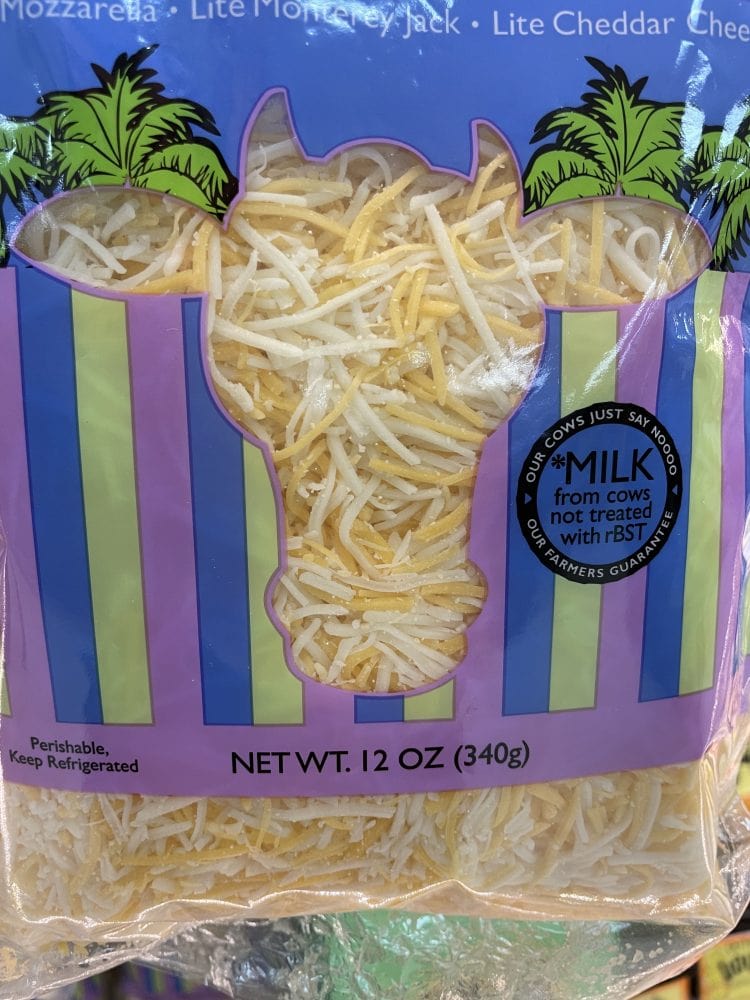 Packaged cheeses don’t melt well due to the cellulose content; use them for cold dishes only.

Which cheeses melt the best?

If you’ve read this entire article, you already understand that more milk fat equals easy melting cheeses. So if you stick to young cheeses, you won’t have to worry if they will melt.

An important note: Different cheesemakers don’t always age cheeses for the same amount of time! So take a look at the cheese before you buy it, even if they both say ‘Swiss’. One might be aged longer.

For great melting cheeses, they should look soft, creamy, and light-colored. 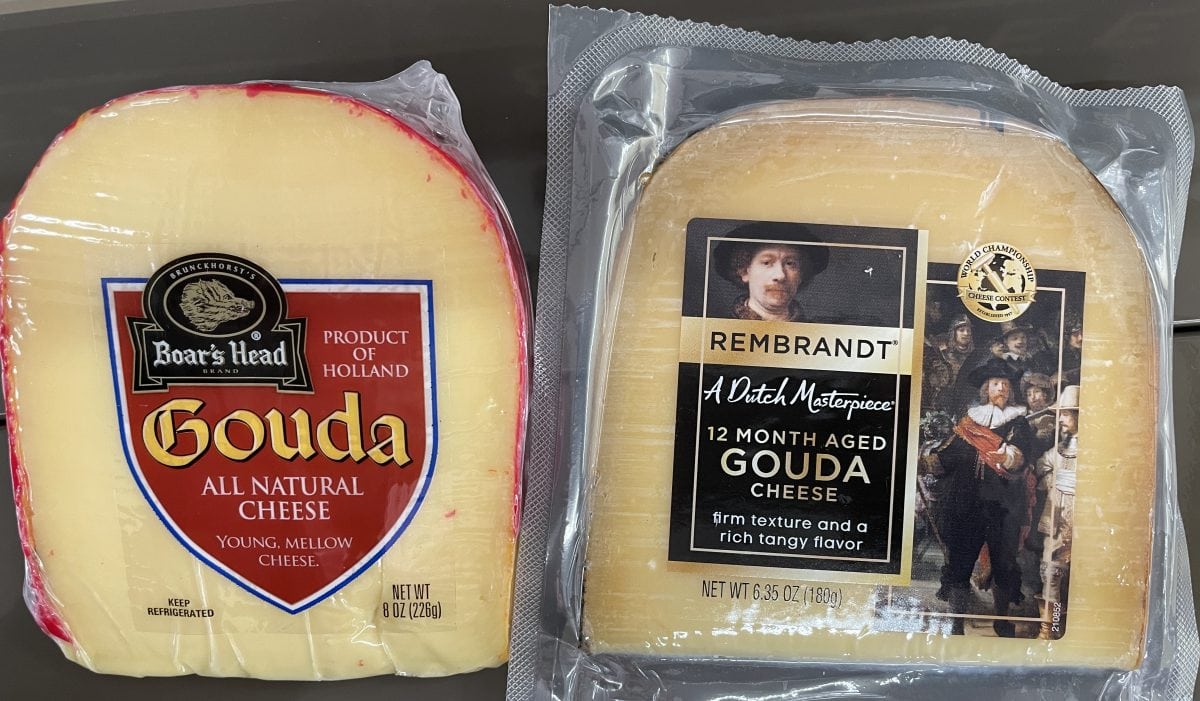 In the photo above, the younger Gouda - on the left - looks light, creamy, and soft, while the aged Gouda looks dark, dry, and oily. Check the edges of the cheese, if they look dark, it’s probably well-aged.

Remember, younger cheeses will generally melt well, so stick to cheeses like; 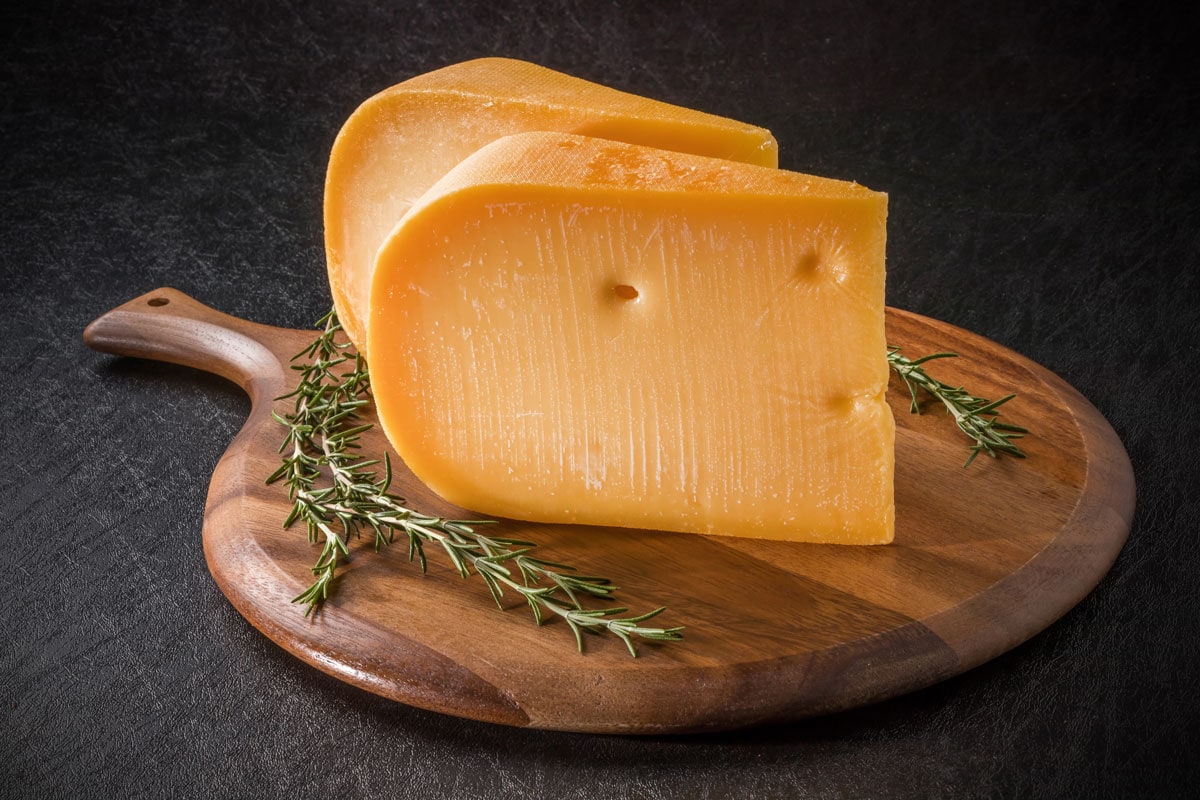 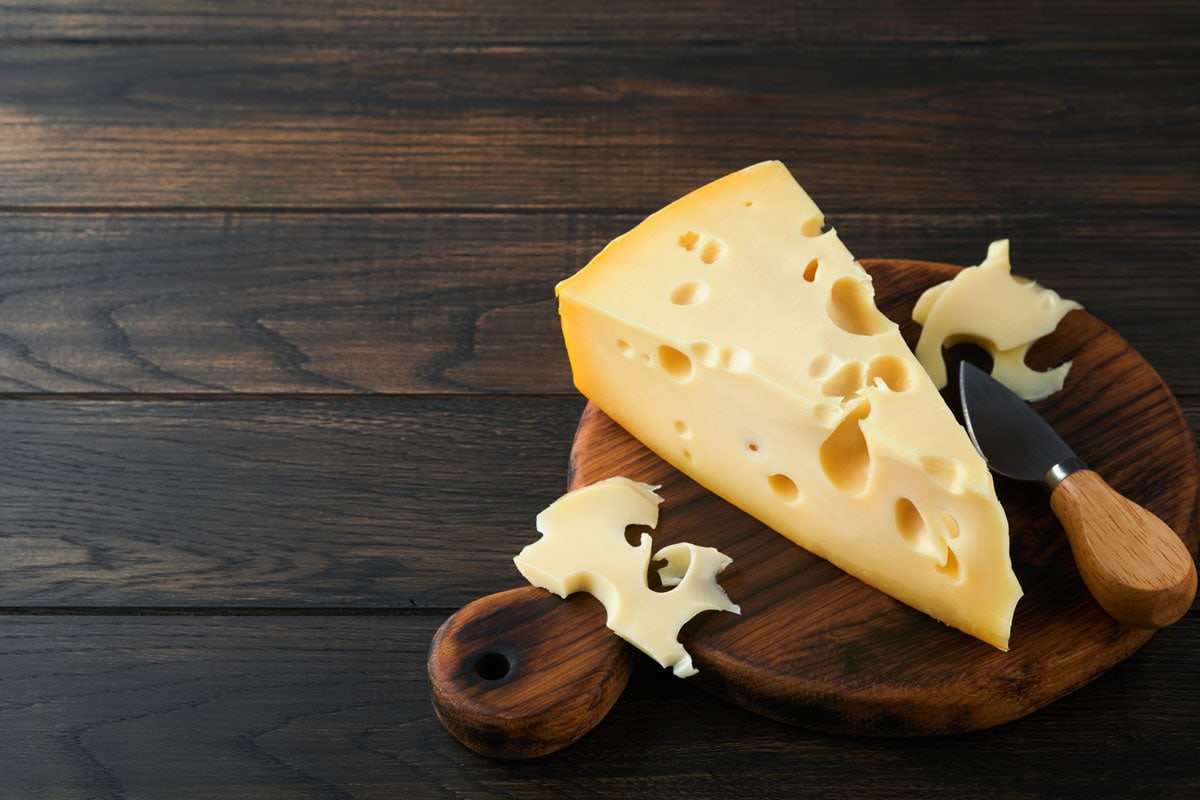 You now have a good idea which Swiss cheese - or any type of cheese - will melt for different recipes. Remember that aged cheeses will take longer to melt because they have less milk fat, so adjust your recipes if needed. Now you’re ready for any cheese recipe you find!

14 Types Of Cheese Knives [Inc. What Cheese They’re Good For And Why]

12 Types of Graters [and How to Use Them]

How Big Should A Charcuterie Board Be?