Although cooking a roast in a crock pot is a game-changer, have you ever wondered if the roast should be completely submerged? We researched this matter to guide you in your roast cooking journey.

Typically, roasts need to be partially covered in liquid in the crock pot. Roasts have a lot of moisture and can produce steam on their own to cook the meat to perfection.

This article aims to go into great depth about roast cooking in a crock pot. Also, we'll explain how to prepare this pot roast, whether browning is necessary before putting it in the crock pot, and more. So keep reading below! 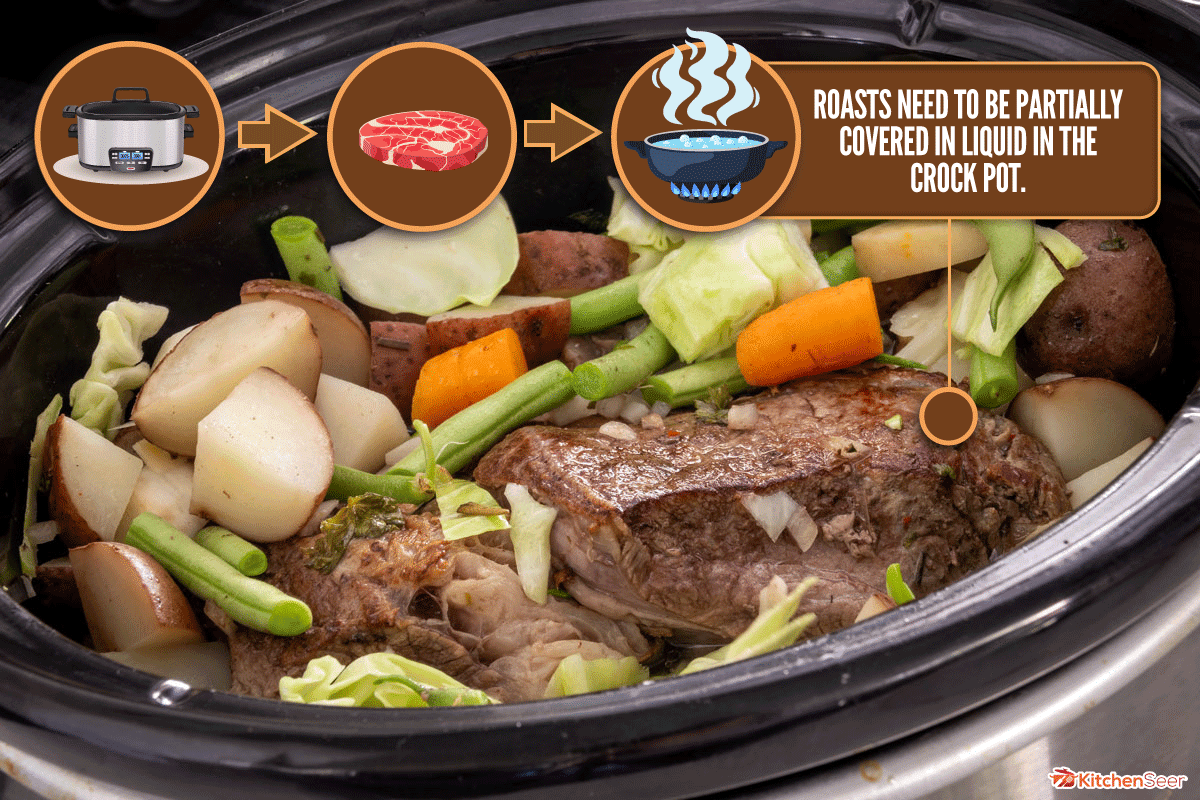 Does Roast Need To Be Submerged In The Crock Pot?

Before anything else, "crock pot" and "slow cooker" are interchangeable. Nonetheless, a crock pot is a registered trademark of the slow cooker. 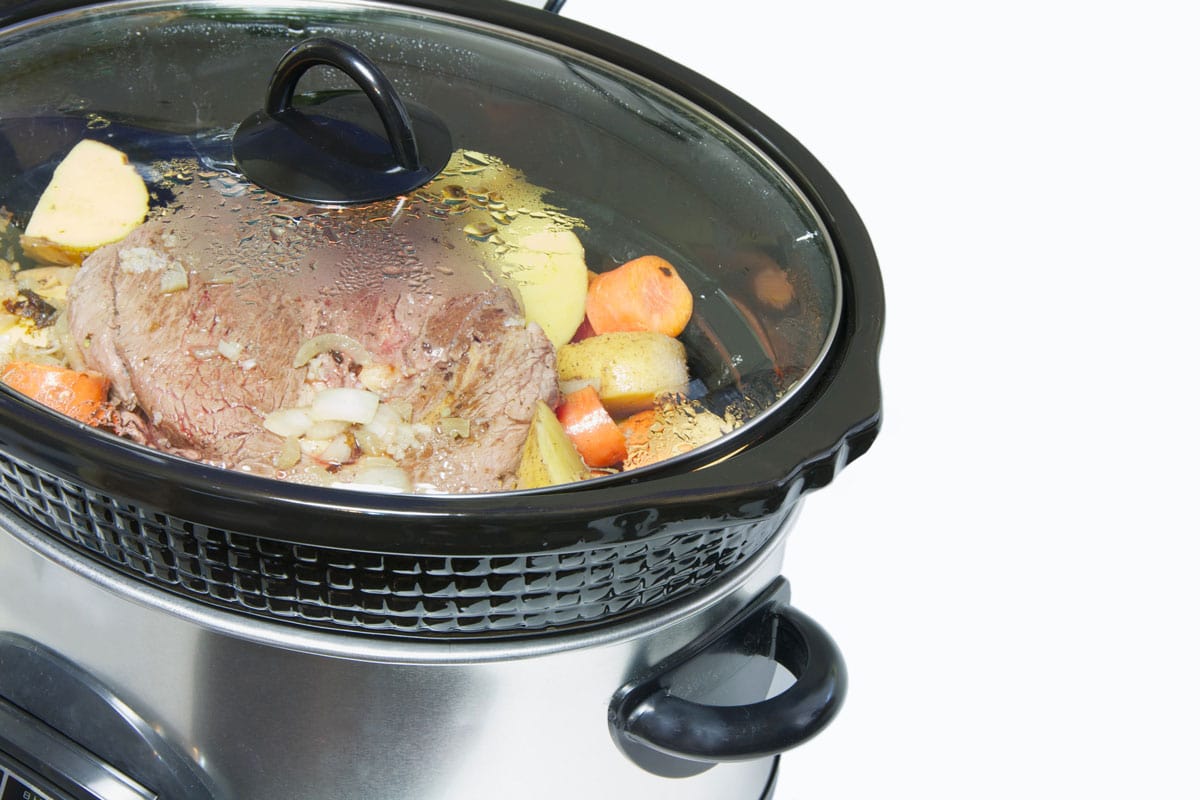 It is a little electrical cooking device with a stoneware insert that cooks food for an extended time at a low temperature.

Check out this slow cooker on Amazon.

The rule of thumb is to use half the liquid called for in the traditional recipe.

As long as the bottom doesn't dry out and burn, slow cookers are forgiving and can be used with little or a lot of liquid. If you cover a pot roast with liquid, you are making a stew.

So, typically, less liquid is used.

A slow cooker's lid and lower cooking temperatures prevent the liquid from evaporating. Therefore, you shouldn't add too much liquid unless you're making soup or stew.

You don't always have to use water when you do add liquid to your roast. Your dish will have more flavor and intensity if you substitute broth, beer, tomato juice, or wine.

See this beef broth on Amazon.

Check out this tomato juice on Amazon.

The American cookbook author advises using a slow cooker with just a few teaspoons of liquid.

This recipe for wonderful pot roast simply calls for two tablespoons of cold water and a dash of Worcestershire.

Check out this Worcestershire on Amazon.

Does Roast Need To Be Browned Before Being Put In A Crockpot? 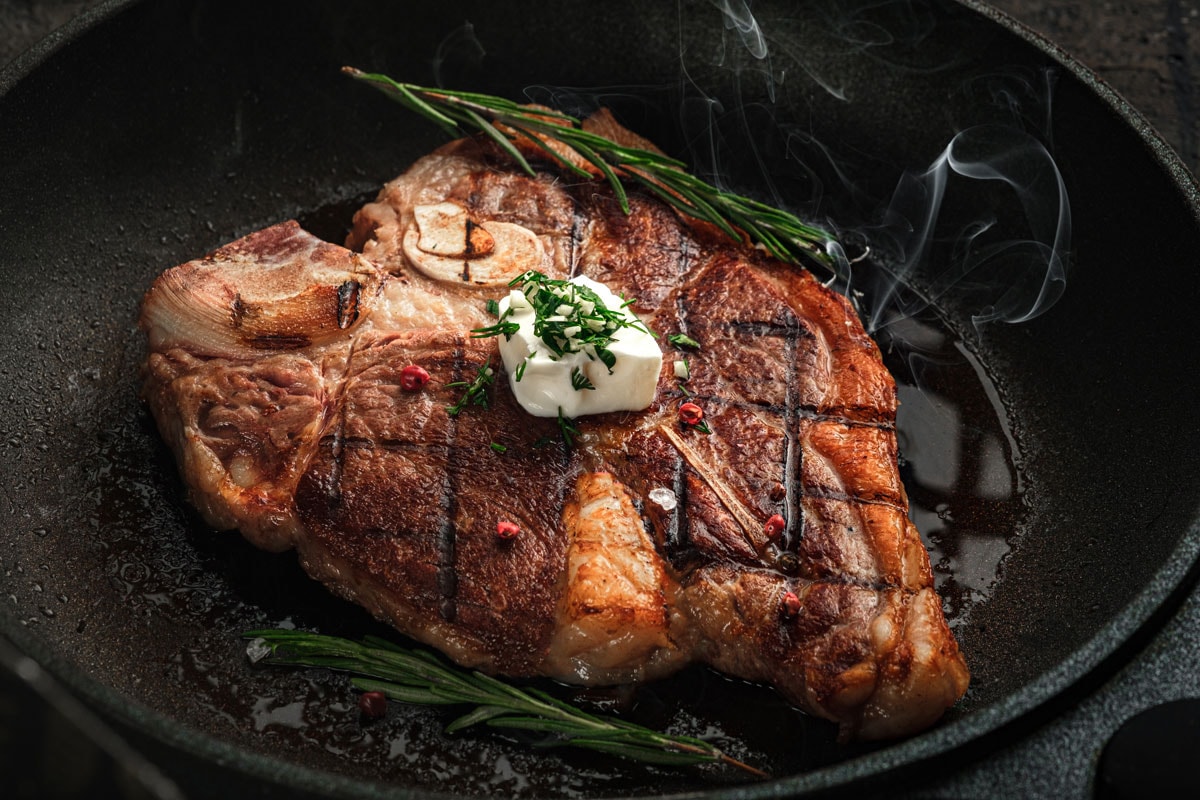 Browning the meat before adding it to the slow cooker is optional.

However, caramelization's "Maillard reaction" adds taste during browning, making it a preferred method due to the richness of flavor it produces. For a specific cut of meat, it is only a small extra step.

With searing, the roast's natural sugars caramelize, and the brown crust that forms on top of the roast further intensifies and enhances the flavor of your dish.

Adding seasoned flour to the roast before searing it is a great additional tip. The flour will assist in thickening the sauce that is slowly cooking your roast and vegetables to perfection.

Check out this flour on Amazon.

Moreover, by searing the roast, you can guarantee that the dish will be less oily and fatty because searing removes a lot of the natural fat in the meat.

How Do You Cook A Crock Pot Roast? 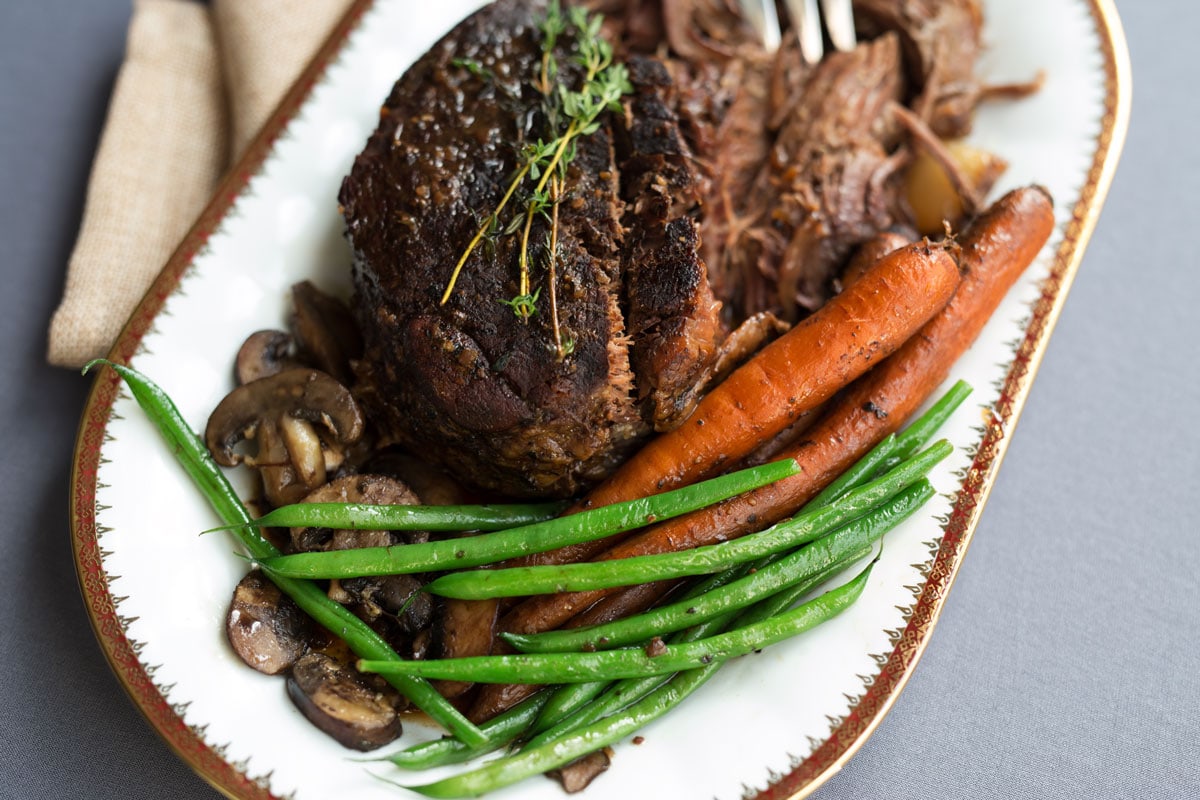 It helps to have a few pointers and some direction to get you started on the right track when learning how to prepare pot roast so that it's consistently beautifully tender and juicy.

A large piece of meat might be frightening, and cooking it properly is one of the toughest kitchen tasks.

Chuck, brisket, rump, and top and bottom rounds are typical cuts used for pot roast. For assistance choosing a cut for pot roast, you may always ask the butcher in your local grocery store.

Leaner roasts like chuck, brisket, or rump can become chewy if not cooked properly since they have less fat marbling. Long, slow cooking develops flavor and tenderness in the roast by softening its fat and connective tissue.

However, you can still achieve soft meat from leaner roasts by braising, which involves cooking them for an extended period over low heat in a tiny amount of liquid.

Seasoning And Browning The Roast

As previously stated, browning the meat before slow cooking improves its appearance and flavor. However, you don't need to worry if the recipe doesn't specify browning, but you might want to try it anyway.

And if you want to try, season the meat first with salt, pepper, and other spices, such as thyme and Cajun seasoning. Also, you can coat the roast with flour or cornstarch before browning.

Heat oil in a pan over high heat. Then, add the meat and cook it through, browning all sides.

Check out this thyme on Amazon.

View this Cajun seasoning on Amazon.

Less fat than steaks is present in the meat cuts used in pot roasts, and lengthy, slow cooking with liquid helps to tenderize the meat fibers.

You can achieve moist heat in a covered pot on the stovetop, in the oven, or much better in a slow cooker.

Usually, roasting the meat in the slow cooker will yield the best results because you must monitor the cooking process closely when the pot roast is cooked on the other options mentioned.

Experiment With The Liquid You’re Going To Use

You can use anything to braise the meat, including tomato juice, beef broth, and cola.

Look through many pot roast recipes for suggestions on what to use as your braising liquid. Braising liquid frequently contains aromatics like sautéed onions or garlic.

The usual additions include carrots, potatoes, onions, and mushrooms, but you may be inventive. When using a crockpot, vegetables should be added right at the beginning.

Depending on the size of the roast. If you are using a slow cooker, it is preferable to start in the morning so that it is ready for dinner. Alternatively, set the temperature to low and leave it there for six to eight hours.

Pot roast will be chewy and rough if it is undercooked. Before removing the roast from the pot, test it with a fork. The meat should readily twist off by the fork if it is done.

Return the roast to the pot and simmer for an additional hour if it is still firm.

Overcooking the pot roast might also result in dry meat. Ensure enough braising liquid is in the pot to prevent this by ensuring it doesn't get too dry.

This YouTube video demonstrates how to prepare this cuisine:

How To Thicken Leftover Liquid In Your Slow Cooker 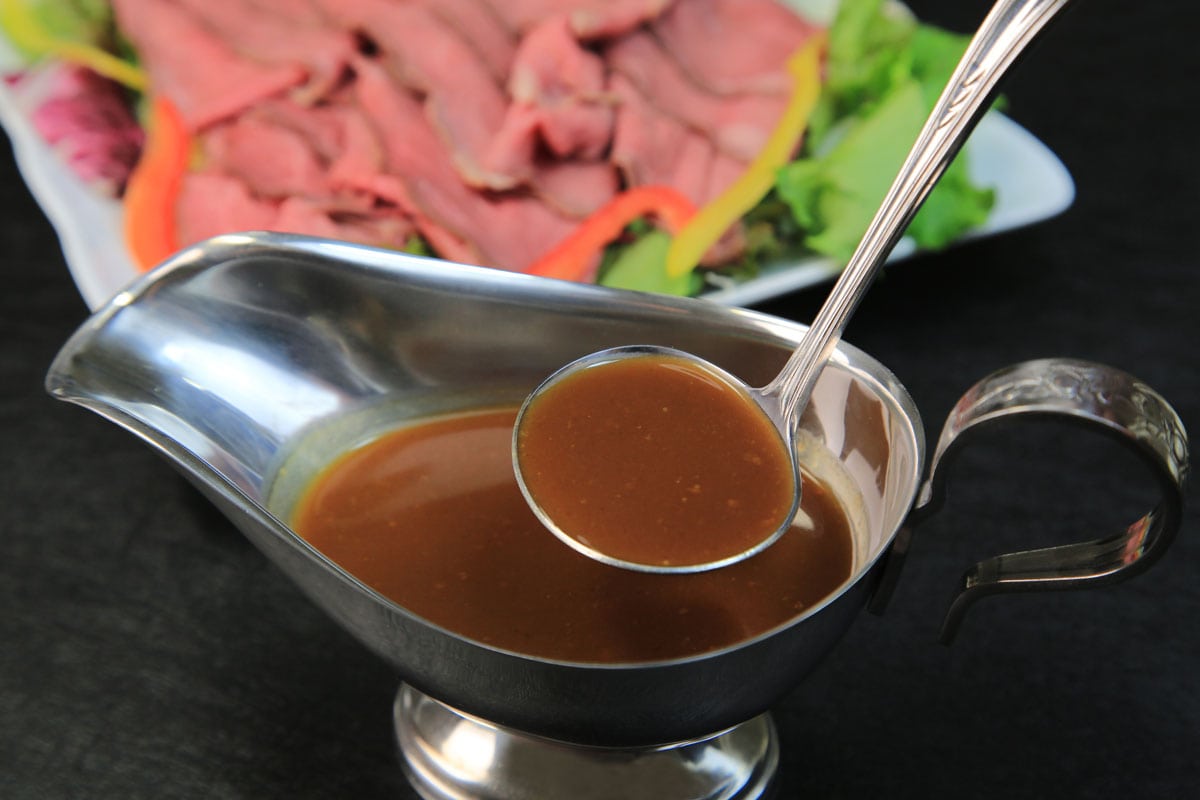 As previously stated, a slow cooker's liquid never evaporates. Always expect to find some liquid at the bottom of your crockpot.

You can easily turn the liquid into a rich, velvety gravy to enhance your mouthwatering roast beef and vegetable entrée. To do this, pour the remaining liquid into a pot or saucepan.

Prepare a 1:1 ratio mixture of flour and hot water. Then, add two tablespoons of your mixture for every cup of liquid in your slow cooker.

Check out this saucepan on Amazon.

Substitute cornstarch for flour if you want gravy that doesn't seem milky.

Add two parts of cold water and one part of cornstarch to a bowl. Add three tablespoons of this mixture for each cup of liquid in your slow cooker.

See this cornstarch on Amazon.

Another method is to mix butter and flour (Beurre Maniér) until they form a buttery paste in a bowl.

If the mixture is too thick, stir in more melted butter. Then, whisk this buttery paste into the slow cooker’s liquid until it thickens.

Check out this butter on Amazon here.

Does Roast Get More Tender The Longer It Cooks In A Slow Cooker?

This frequently relies on the type of meat you're cooking and how you prepped it before adding it to a slow cooker. And it is safe to state that cooking something in the slow cooker for a longer period is usually always better.

Meat is likely tough and dry if cooked for a long time in a hot setting (above boiling point, 212°F). However, it will remain moist and tender if you cook the meat in a slow cooker at a low setting (below the boiling point).

The slow cooker is quite well-liked for this reason.

Cooks may just set it and leave it alone for several hours. Whether you're preparing tacos, sandwiches, or any form of stew, the meat will turn up tender in almost any cut.

However, you don't have to pick between tenderness and flavor when you make your meal in a slow cooker. You can preserve the natural flavor of your meat by cooking it at a low temperature because it will be done more uniformly.

Nevertheless, you must watch out that red meat doesn't become overcooked. If it does, likely, it won't be juicy and tender when you're ready to serve it. 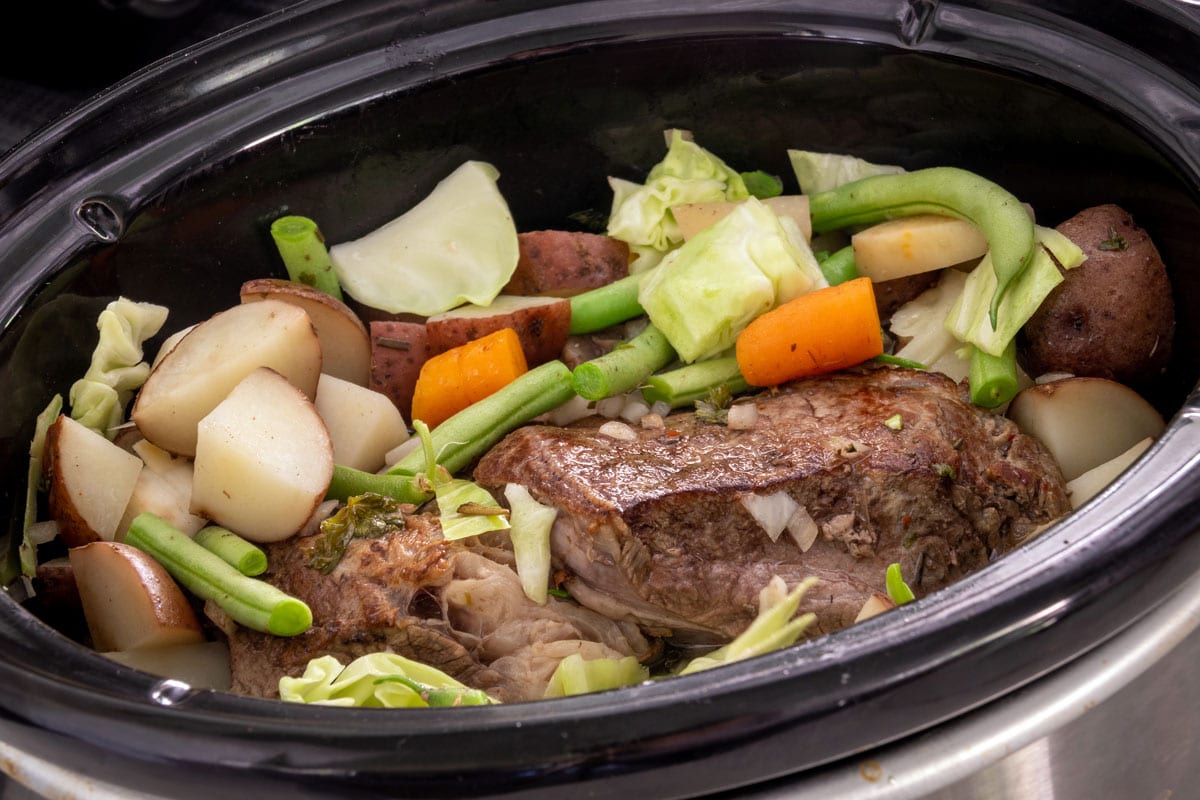 Now that you know how much water goes into a slow cooker for a roast, you may confidently make this meal. A few vegetables and your roast are all you need.

Just keep in mind not to drown your roast in liquid. Eventually, a delicious crock pot roast will be served.

Before you go, check out some other yummy foods cooked in the crock pot that we have below:

Turkey Breast Too Big For Crock Pot – What To Do?

Can You Put A Loaf Pan In A Crock Pot Or A Dutch Oven?

How Much Does A Ladle Hold? [Sizes Explored]

Can You Put Eggshells In The Garbage Disposal?