Baking apple pie is an art. Like all good art, apple pie can thrill the senses and evoke emotion. For instance, grandmother's famous apple pie evokes warmth, familial love, and fulfillment. To perfect the art of apple pie baking, must your pies have a top crust? We’ve done the research, we’ve sourced highly reputable bakers, and we have answers for you.

The answer is no, apple pies do not necessarily need a top crust. The baker has some artistic licensing here. Baking is a science, and while some finesse is required, apple pie does allow room for inspired expression.

Keep reading for all the ins and outs of whether to use a pie crust on an apple pie! 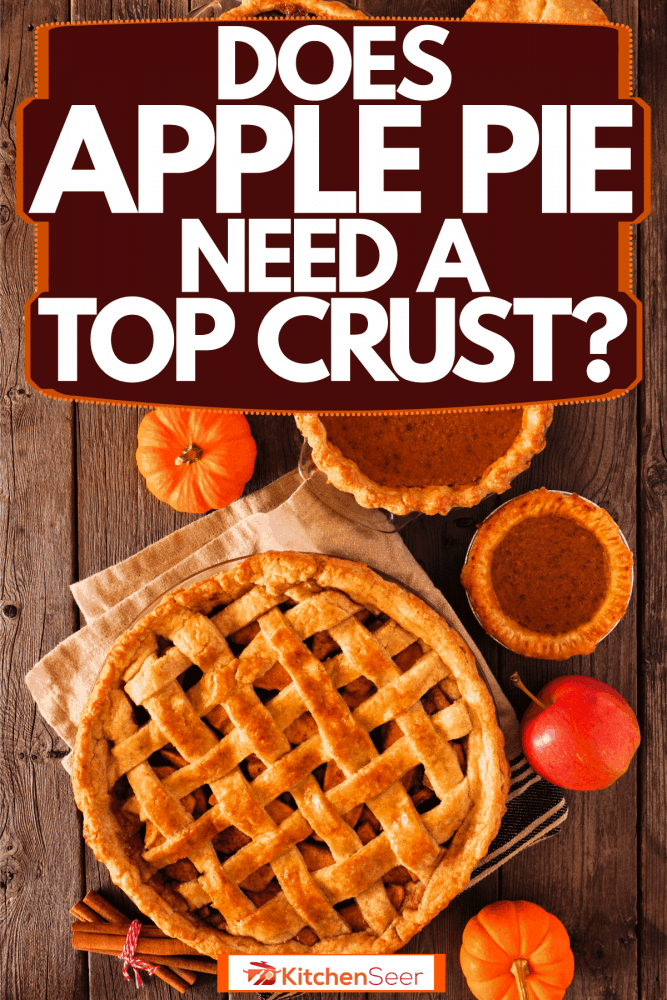 What is the top crust of a pie for?

Why then do people cover their apple pies with a crust? There are some strategic advantages to applying a top crust. First off, it provides somewhat of a lid which allows for the apples in the pie to simmer. Simmering the pie allows for the juices, spices, and apples to meld. This helps create the consistent apple filling we all know and love.

Another advantage to using the top crust is to prevent overflow from spilling out the sides of the pie pan. Of course, who doesn’t love a pie filled to the brim with filling? The setback is some of the fillings might spill over and dirty the bottom of the oven, which is not the easiest to clean. Solution? Use a top crust to prevent juices from spilling out. If your pie is so full that juices still pour out of the top crust, fear not! Place a baking sheet under your pie to catch the juices.

The top crust also provides an aesthetic value. It has been said that people first eat their meal with their eyes. When brushed with egg, wash the top crust crisps to golden perfection. Little slits on the top provide both a vent for steam and a pretty design in the center of the pie.

Lets us not forget that great pie dough is mouth-watering. It is flaky and delicious. Adding a top crust provides that much more doughy goodness.

The historical context of the top crust

Is there some historical context to a top crust? After all, apple pie has historically been an American favorite. Does the top crust have some essential American tradition value? Well, according to the Smithsonian, the first apple pie was baked in England in 1381.

English crusts were inches thick and were thought to be inedible food containers. A sealed pie crust was referred to as a “coffin,” whereas an open pie crust was called a “trap.” An open crust was reserved for pies with the consistency of a casserole. Coffins or sealed crusts were used for stewy pies that had more juices or gravy. Traditionally in England, pies were savory and made with meat and spices.

How to apply top crust 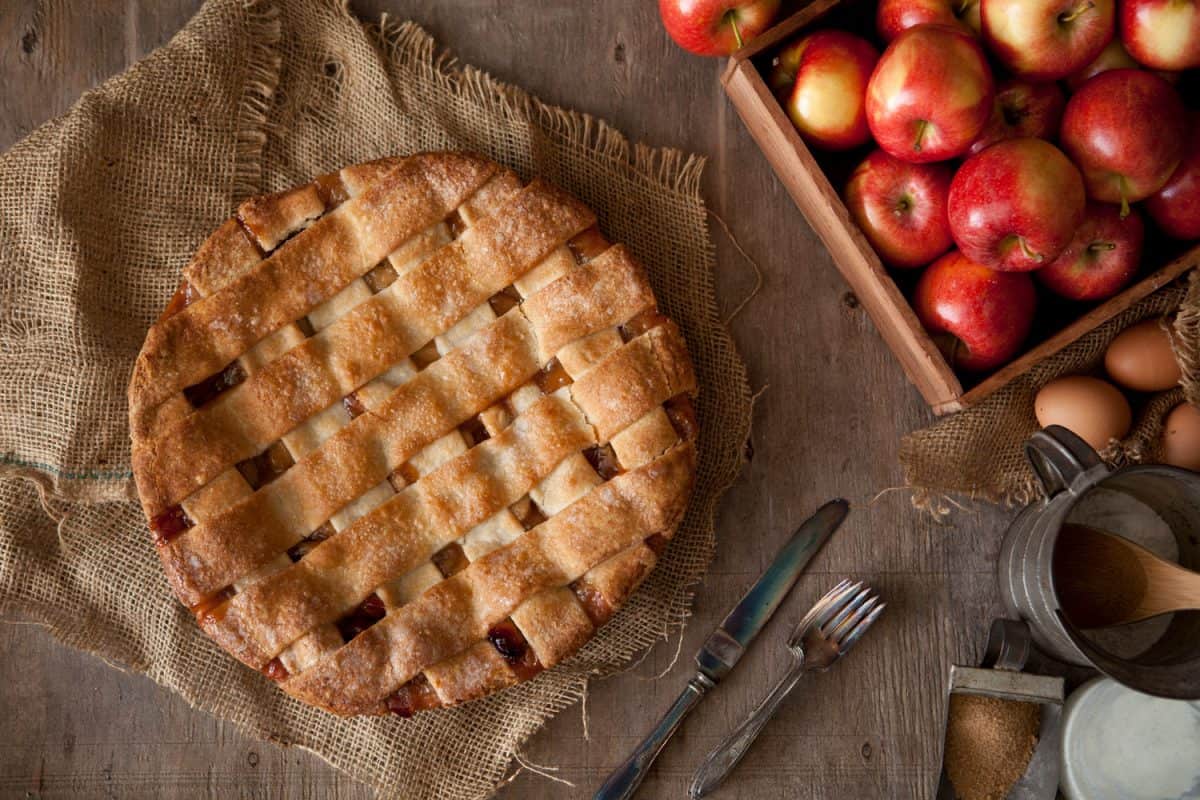 Now gently place your top crust onto the pie. Next, cut both the bottom crust and top crust at the same time. Cut them half an inch from the rim of the baking dish. You can do this with a pair of kitchen scissors.

Here is a great apple pie recipe for dough and filling. It will walk you through all the steps you're wary of.

How to bake a pie without a top crust 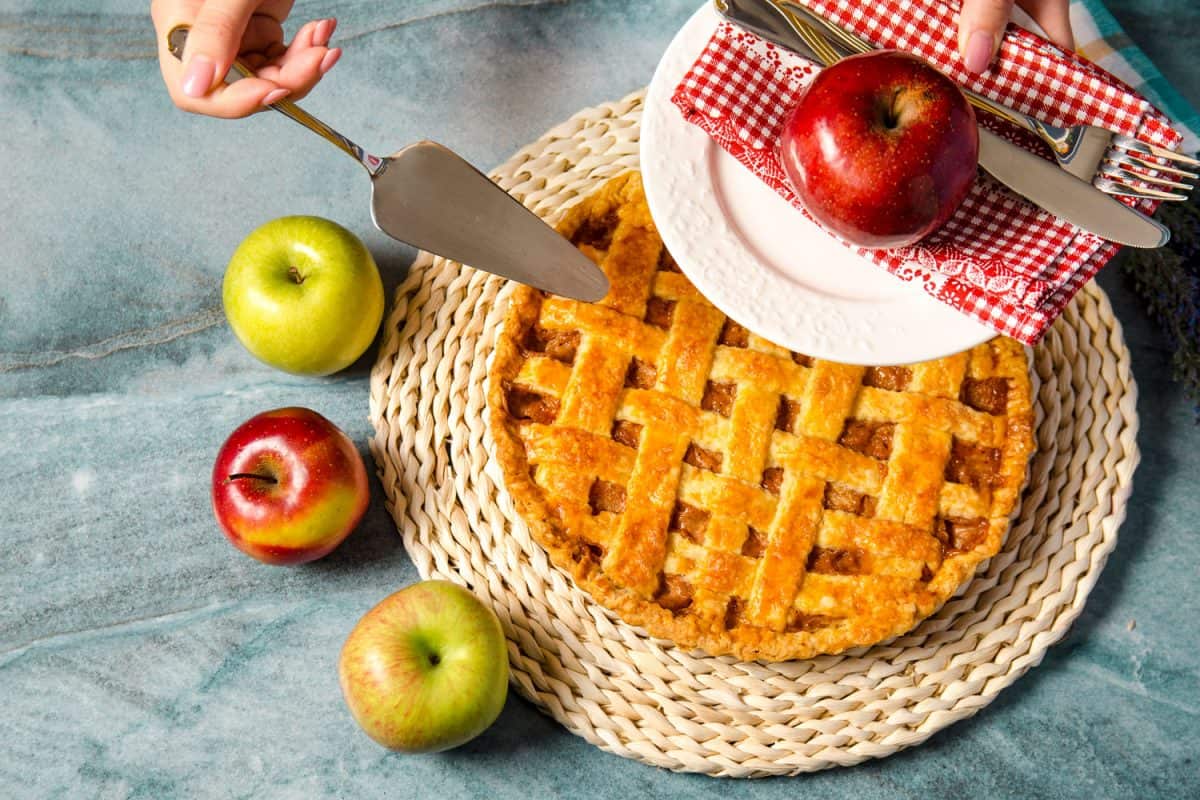 Baking a pie without a top crust is unorthodox but not impossible. There are advantages to not using a top crust. Let the simplicity of the ingredients speak for themselves. Apples are beautiful; why cover them up? Without the crust cover, the apples will take on a different flavor and texture. The apple filling will be less juicy. Instead, apples will be soft and tender on the inside and toasted slightly on the outside.

There are tricks to making the perfect coverless pie. Trick one, pick the right apple. We don’t want the bottom of the barrel apples here. We need the cream of the crop to help the pie shine. Crispy, sweet, and tart apples are crucial.

You must precook the filling. This is important because if you don’t, the apples will not be the right consistency.

Next, after filling has cooled, evenly distribute the filling inside the pie to achieve the aesthetic you desire. This will help the pie bake evenly.

Lastly, you’ll want to keep a keen eye on your pie as it bakes. When the apples are golden and the pie is bubbling just slightly, it will have baked to perfection and is ready to come out of the oven.

Some people take the time to layer their apples in a pattern when baking pies without a top crust. To do this, you must slice your apples into thin identical slices. A simple design is layering a row of apples around the crust. Then work your way in. It creates a rosebud effect that looks beautiful.

Alternatives to the top crust

If you don’t want to add a top crust, but you would like to top your pie with something, try an alternative: Dutch apple pie. Dutch apple pie is topped with buttery crumbles. Instead of doing a top crust, mix butter, sugar, brown sugar, and flour to achieve the perfect crumbles to layer on the top of your cake. The apples inside the pie will simmer, the crumbles will toast to perfection. It's a mouth-watering delight! Try this Betty Crocker recipe.

How do you seal the edges of a pie crust?

To seal a pie crust, you need to place water around the rim of the bottom crust. Place the top crust on the pie. Cut the two crusts half an inch from the edge of the dish, fold them under themselves. At this point, you can crimp them together with your fingers to seal the pie.

There are all kinds of fancy crimping techniques. One of my favorites is finding a festive stamp and crimping the crusts together with it. This leaves a cute design around the rim of the pie, and it seals the pie. Win, win!

Do you poke holes in a pie crust before baking?

What does adding an egg to pie crust do?

How do you make a lattice pie crust?

Preparing a lattice pie crust is a lot easier than it might look. Follow the procedure for a top crust. Step one lay down the bottom crust, so it overhangs out of the pie pan. Fill the pie pan with filling. Next, take your top crust and cut it into even strips. You’ll want your strips to be about one and a half inches wide.

Lay strip parallels each other, about one inch apart from each other. Next, lay more strips perpendicular to the ones previously laid on the pie, again about an inch apart. These strips are to be woven in and out of the other strips.

Then form your crimped rim the same way described above. Viola, A lattice pie crust!

Is cheddar cheese on apple pie a thing?

Yes, some eat sharp cheddar cheese with their apple pie. This tradition harkens back to a time when the English made savory pies with a dairy gravy. The cheese was melted on top when pies were served without any dairy.

There were no freezers then, and ice cream was hard to come by. Nowadays, it is much more common to scoop ice cream or swirl whip cream on top of the pie for that complimentary dairy flavor.

Yes, traditionally, apple pies were made with a top crust. However, do not let that sway you from experimenting with alternatives. It is possible to make a topless pie or use alternative tops like a crumble, for instance. Make the pie you are most inspired to bake! I believe, no matter which way you bake it, it will be a masterpiece.

Can You Have Rice With Lasagna?

Do Peppers Or Onions Cook Faster?

How Long To Cook Pizza In The Oven?