Upgrading your old appliances is always an exciting time. You get more features than your previous refrigerator offered, although there may be a few components of your new fridge that you've missed. For example, do refrigerators have air filters, and where can you find them? If that's what you're wondering, we've researched the topic for you!

The best way to see if your refrigerator has an air filter is to check the user manual. Typically, you can find things like air filter location and other details about how your fridge operates, so this is a valuable thing to have. That said, most modern refrigerators will have an air filter, so if your appliance is newer, chances are it probably has one.

There's a lot more to learn about a refrigerator's air filter. While they might not stand out much, they have to play a role in maintaining fresh food. If you're curious to learn more about what they do and how to find it, keep reading ahead! 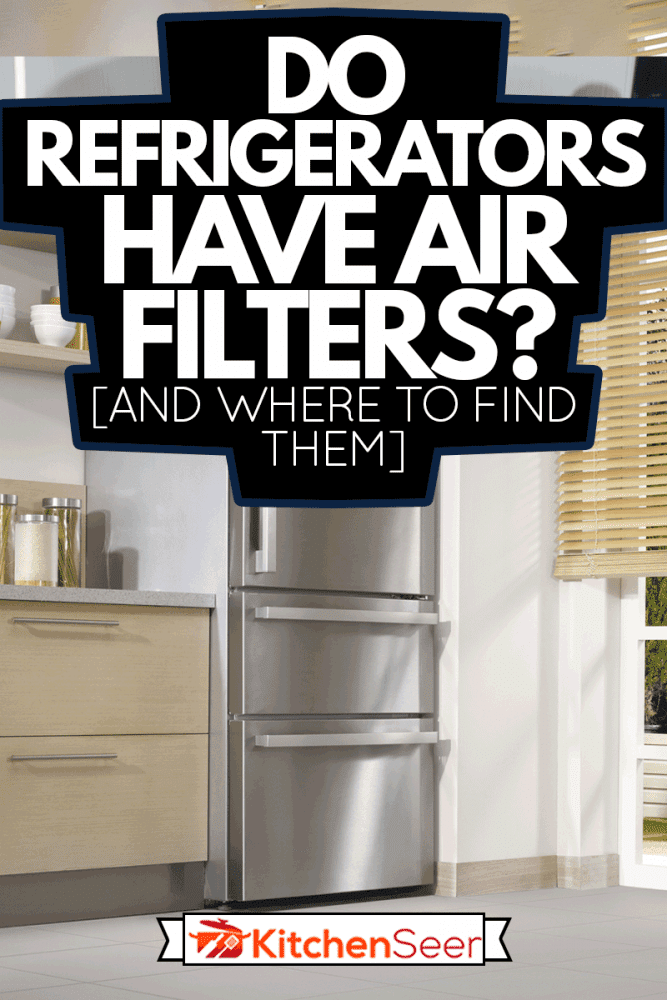 Refrigerator Air Filters And Their Purpose 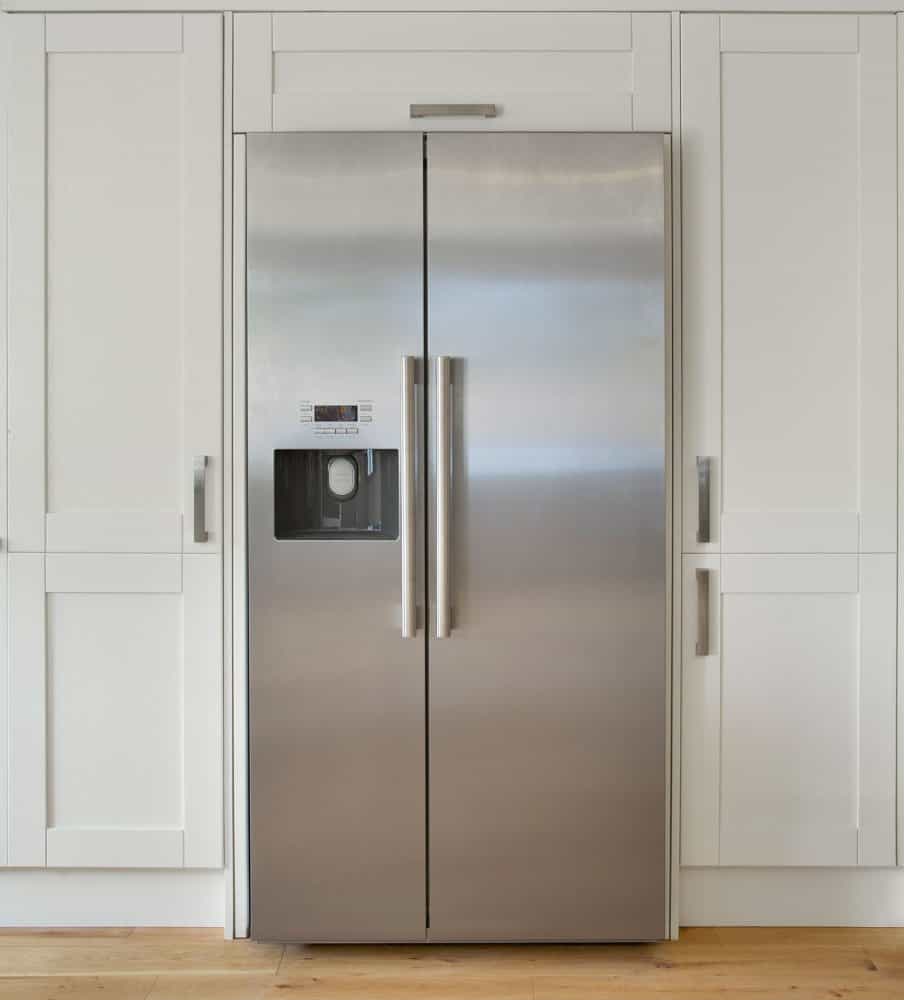 As we mentioned, not all refrigerators will have an air filter. But, the more modern your fridge is, the more likely it's going to include one. Of course, this can also depend on the brand.

For example, some brands like Samsung don't include an air filter in their refrigerators, while LG typically does, so this can vary for everyone.

It raises the question, what purpose do they serve? According to LG, air filters will keep clean air circulating inside your refrigerator. They also work to eliminate odors that might start to form in your fridge, so they serve a few purposes.

But, how exactly do they accomplish this? Well, certain manufacturers, like LG, use carbon-based filters for their refrigerators that can clean the air and remove bad smells. You can also look online for replacement air filters, which are mainly made with carbon materials.

Carbon-based filters are one of the most common types you'll see to remove gases. They extract gases by filtering them through a bed of activated carbon. Some may even refer to activated carbon as activated charcoal, so keep an eye out for those terms.

It works by the process of adsorption. Yes, you heard that right, adsorption. There's a distinct difference between absorption and adsorption.

With absorption, contaminants are absorbed inside the structure. Activated carbon filters don't do that. Instead, they trap pollutants on the surface of the carbon.

As you can already guess, there's a limited amount of surface area that a carbon-based filter has to trap gases. Once all the adsorption beds are saturated, the filter will no longer do its job. For this reason, you'll typically see manufacturers recommend you replace them every six months.

Typically, you'll know it's time to replace the filter once it starts emitting an unpleasant smell. However, sometimes it's not that easy to tell when you should change it as your filter may not have an odor, so try to plan for twice a year regardless.

That said, if your filter doesn't appear dirty or have any traces of bad scents, you might be able to use it a bit longer.

Where Is The Refrigerator Air Filter Located?

Finding the air filter for your refrigerator will depend on the brand. In general, there should be a small compartment that houses the filter near the back of your appliance.

However, the filter housing will be in the back corner in some cases. Removing and replacing the filter will also vary. Some require a simple pull to remove, while others may need you to squeeze two tabs to release it.

Let's look at some examples. The first we will cover is a Whirlpool refrigerator. For a visual demonstration, here's a YouTube video showing you where you could find the air filter:

As you can see, the air filter is at the back of the refrigerator. It might also require you to remove one of the shelves to access it.

Now, let's take a look at a Frigidaire refrigerator:

Frigidaire refrigerator filter placement will vary depending on the model. In one instance, you can see that you need to place the filter into a cartridge. Then, place the cartridge back into its compartment.

Other Frigidaire models will have a housing cover that you need to take off to replace the filter. Lastly, some filters can also have an adhesive that you can stick into the side of the fridge.

Here's a look at the housing for an LG refrigerator filter:

LG's way of housing the filter is much like Frigidaire's method. The brand will hide it inside a cartridge that you will need to remove to access the filter.

For an accurate answer, you need to do two things. Find the model number of your refrigerator. Then, look online on the manufacturer's website for the manual.

This step is necessary to avoid making mistakes when accessing the filter. In some cases, like the Whirlpool model above, you might pop something that's not intended to open.

Do You Really Need To Replace The Refrigerator Air Filter? 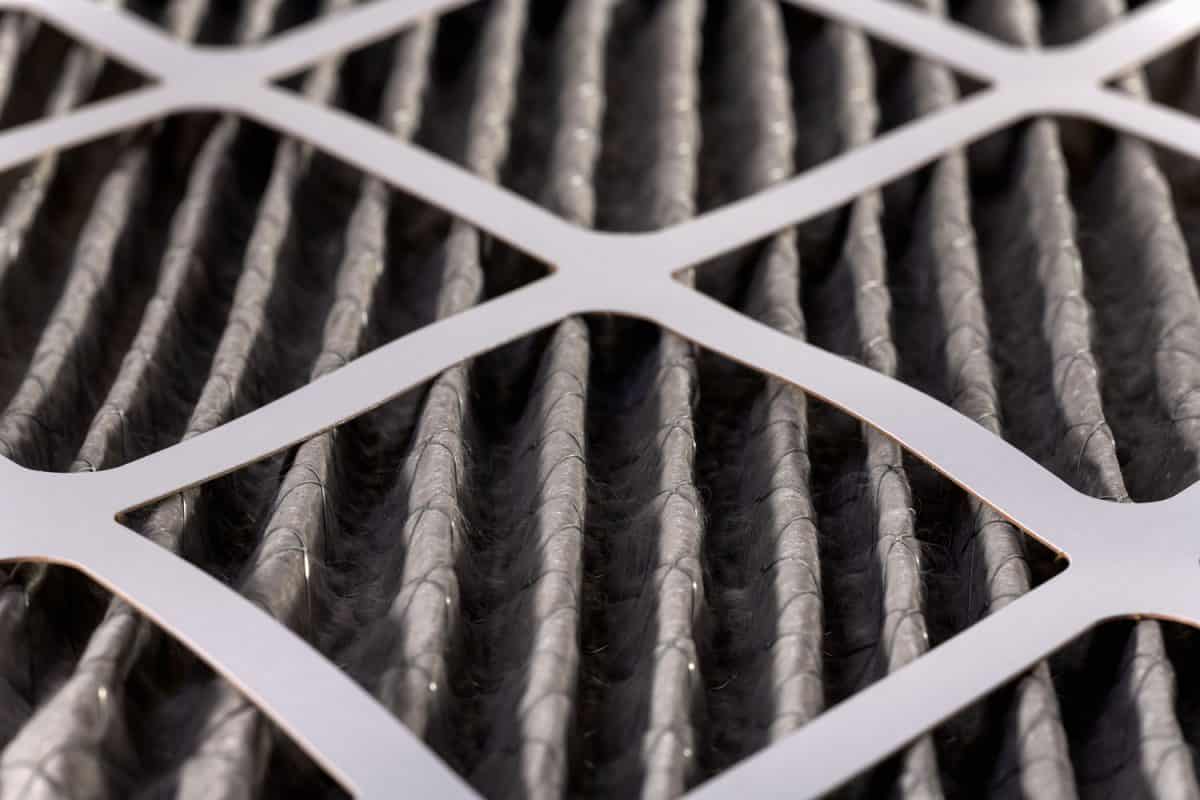 The effectiveness of a refrigerator air filter is up for debate. Some would argue that it's useless in a refrigerator because it seems like it's doing nothing. In contrast, others think that using boxes of baking soda is a cheaper alternative to purchasing an air filter.

So, are you getting the most of your money when you use a carbon-based air filter? It would seem that it does make a difference for some people. In one instance, a user claimed that it helps eliminate odors that would otherwise contaminant the other foods inside the fridge.

To adapt to this situation, you could also place more boxes of baking soda to absorb odors in areas that the others won't reach. However, are you willing to give up storage space to make room for what's essentially an odor remover?

Click here to see this air filter on Amazon.

The alternative would be to dedicate a filter to remove odors from your fridge. Of course, it will cost more, but overall, we think it's a practical option backed by science.

It also works through the process of adsorption. However, it depends on your budget and the conditions in your fridge. With that said, there are a few ways you can keep your refrigerator fresh without purchasing an additional air filter.

The first idea would be to make it a priority to consume food on time. Meaning, you won't let them rot in the fridge. In addition, make sure to clean the inside of your fridge whenever you can.

Another way to go filter-less is to avoid storing stinky foods near others that you don't also want to start to smell. If you follow these steps, you most likely could get away without using an air filter in your refrigerator.

What Happens If You Don't Change A Fridges Air Filter?

Refrigerators include an air filter to target odors. So, if you don't change the filter for some time, the filter will eventually saturate with contaminants. When this happens, it will no longer have the surface area to remove odors from the inside.

As we mentioned earlier, this can lead to two situations. In the first scenario, the filter itself will start releasing odors. It's a clear indication that you need to replace it immediately.

On the other hand, it might not release odors at all but fail to do its job because it doesn't have space to hold in more contaminants. This aspect is the disadvantage of using a carbon-based filter. Sometimes it can be a guessing game to determine when/if you need to replace it.

For this reason, manufacturers like Frigidaire recommend you change it every six months. Alternatively, you can also wait until the filter status light lights up on your appliance.

How Do You Change The Air Filter In A Refrigerator? 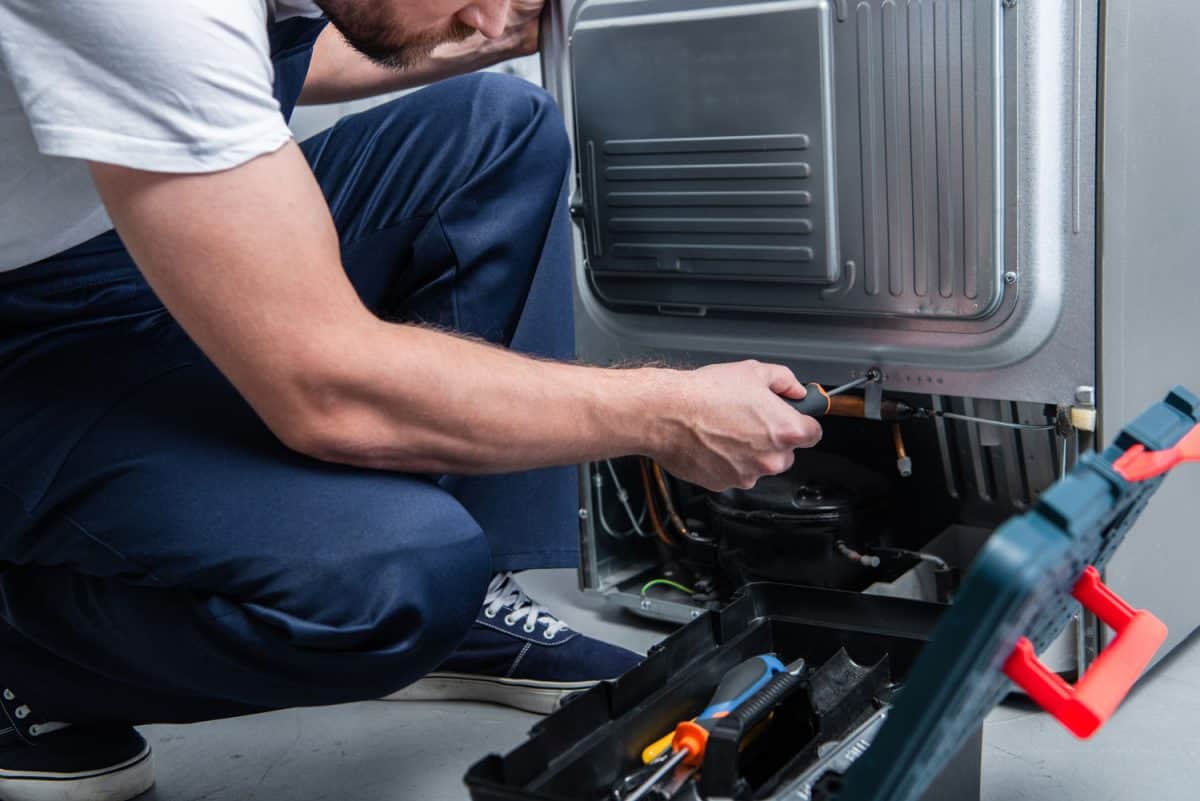 Changing the air filter in a refrigerator will vary by model. In general, you can find the filter in a housing compartment inside or on the back of your fridge. It can also be stuck on the side, housed in the back behind a cover, or near the back corner.

That said, you can always refer back to the video tutorials above or check out your fridge's user manual, so there are ways to locate the filter regardless. 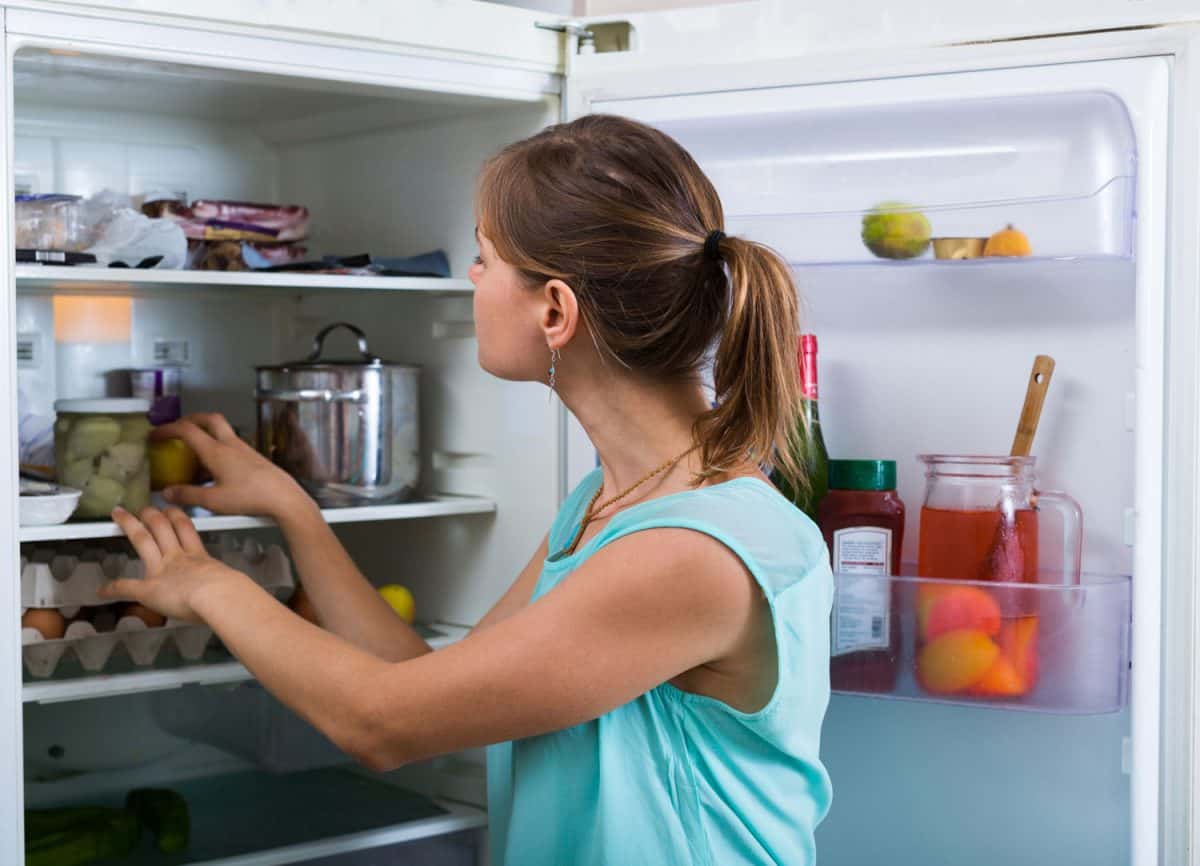 As technology advances, appliances might start using features that you might not be aware of. Now we know that some refrigerators use an air filter. In terms of effectiveness, it's up for debate. We hope you found the information above helpful!

How Long Should Refrigerator Water Filters Last? [And When To Replace Them]

Do you need help finding out the age of a refrigerator? If you own a Whirlpool fridge, check out this post:

How Old Is A Whirlpool Refrigerator - Here's How To Tell

Do Integrated Dishwashers Need A Cabinet?

Do Trash Compactors Need Special Bags? [And How To Measure For Them]

How Wide Is A Kitchen Sink? [Single And Double]