As we move into the summer months, we return to lighter fare like quiche and tarts. These two items seem quite similar, which might make you wonder, what's the difference between them? We looked into it and can give you a few quick things to look for to help you understand the, sometimes subtle, differences between the two.

Both quiche and tarts can make a delightfully light summer repast, but the differences between them can sometimes be hard to recognize at first glance. However, there a few key items that will help you better understand which is which. For instance, while a tart may be sweet or savory, a quiche is always savory and will always contain an egg custard filling. It also has a pie crust that is flakier than the pastry crust used when baking a tart.

Continue reading to learn about more types of quiche and tarts along with the different types of fillings you can use. We'll start with quiche. 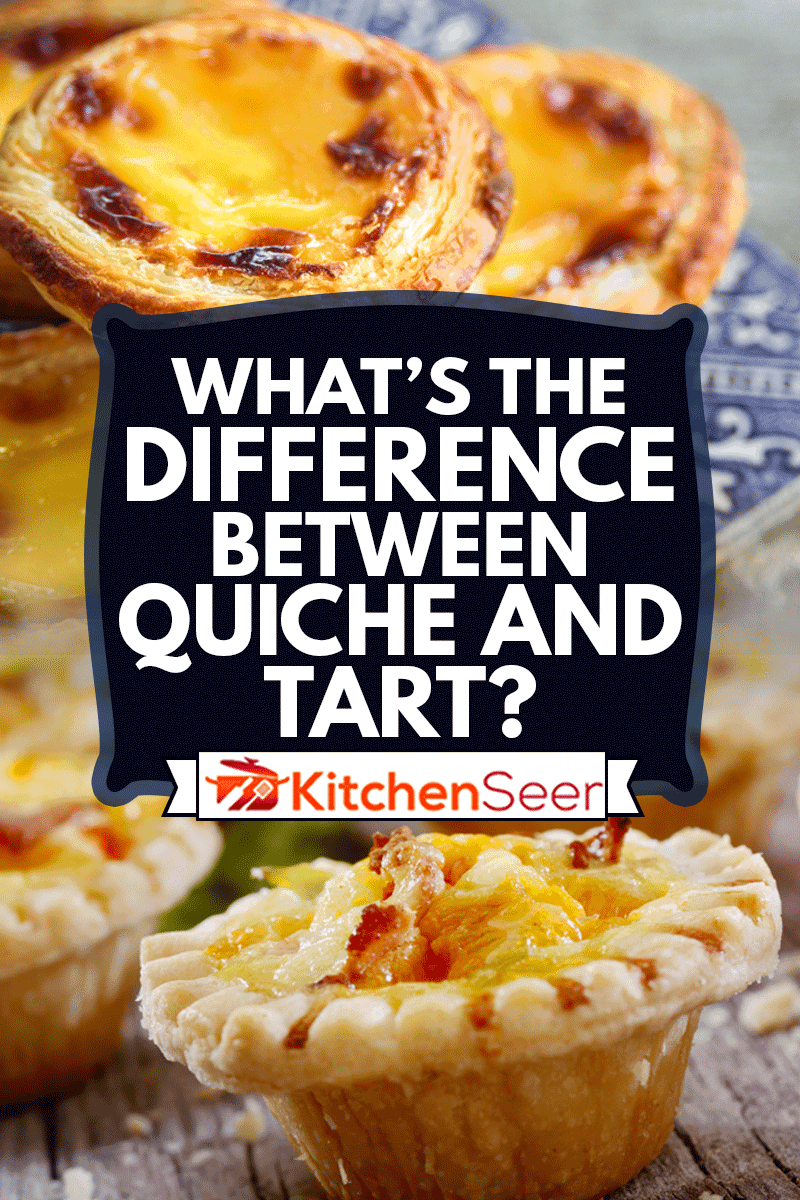 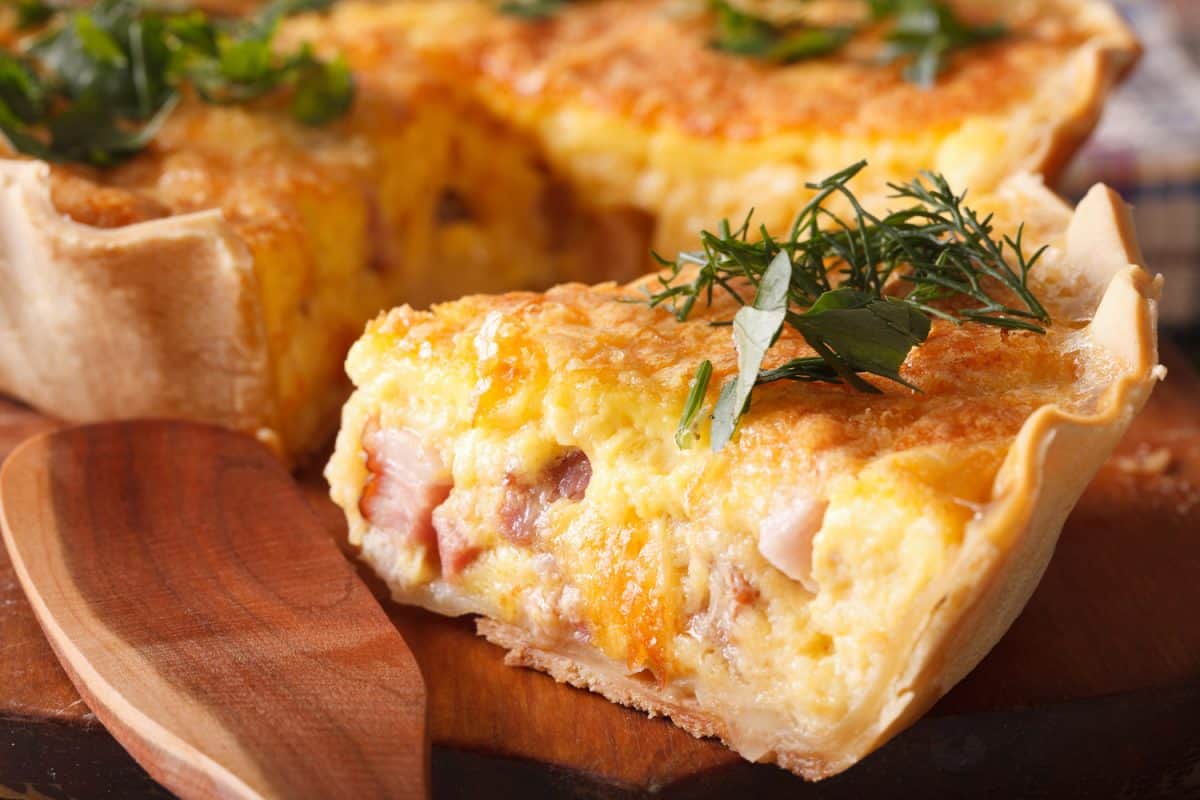 Quiche is a well-known staple for brunch, but with its savory flavors and healthy ingredients, it also makes a wonderful light dinner when served with a salad on an especially hot day.  The base for making a quiche is an egg and milk custard and most quiche recipes include cheese. Sometimes a quiche may also contain meat, like the well-known Quiche Lorraine which is made with cheese and bacon. Even with these directions, you can make it your own by using a different type of cheese. 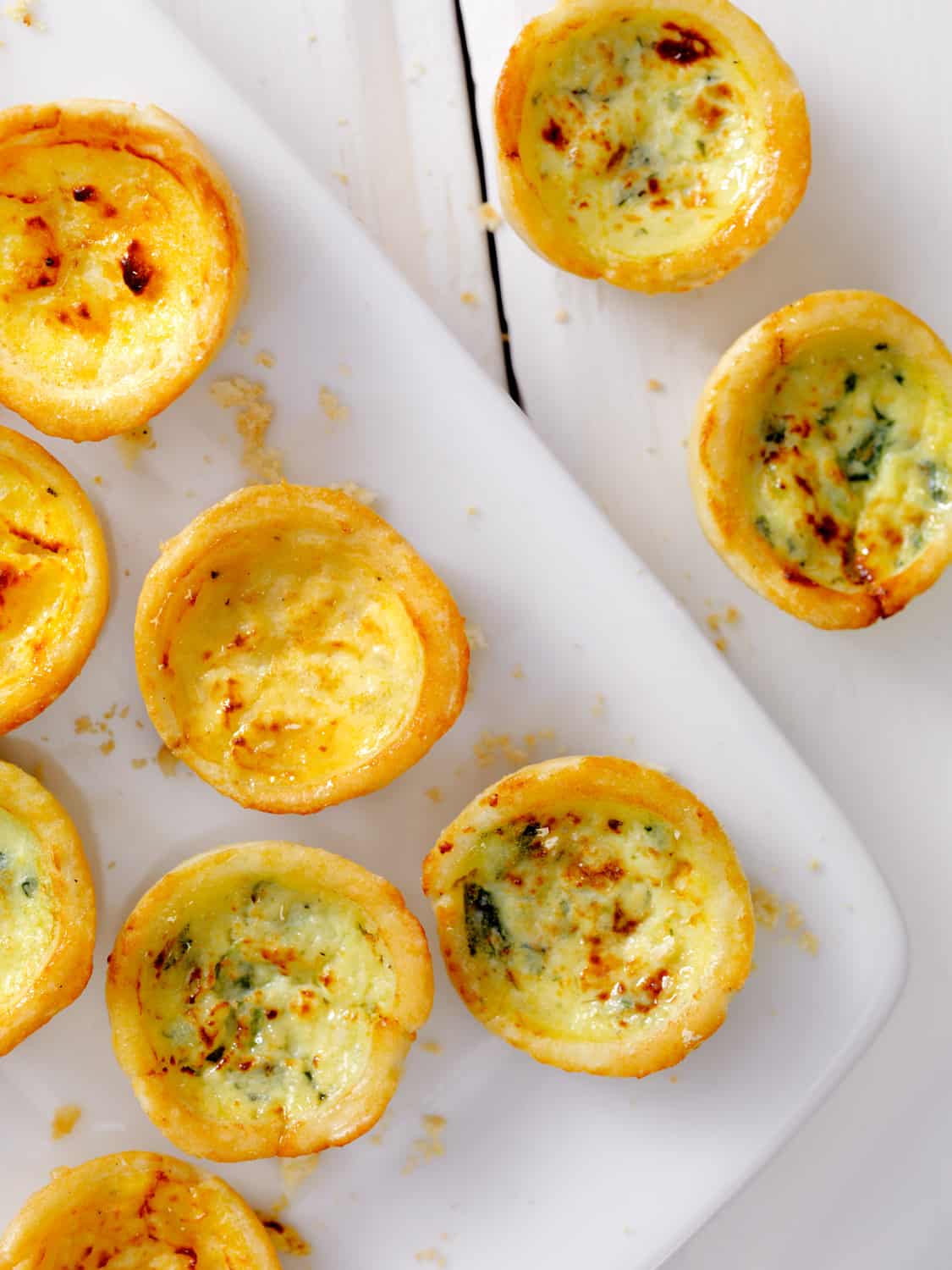 Mini quiche makes great hors d'oeuvres because they are compact and easy to eat as well as being tasty. They also allow a hostess to make a vegetarian option available along with an option for the meat-eaters among their guests. 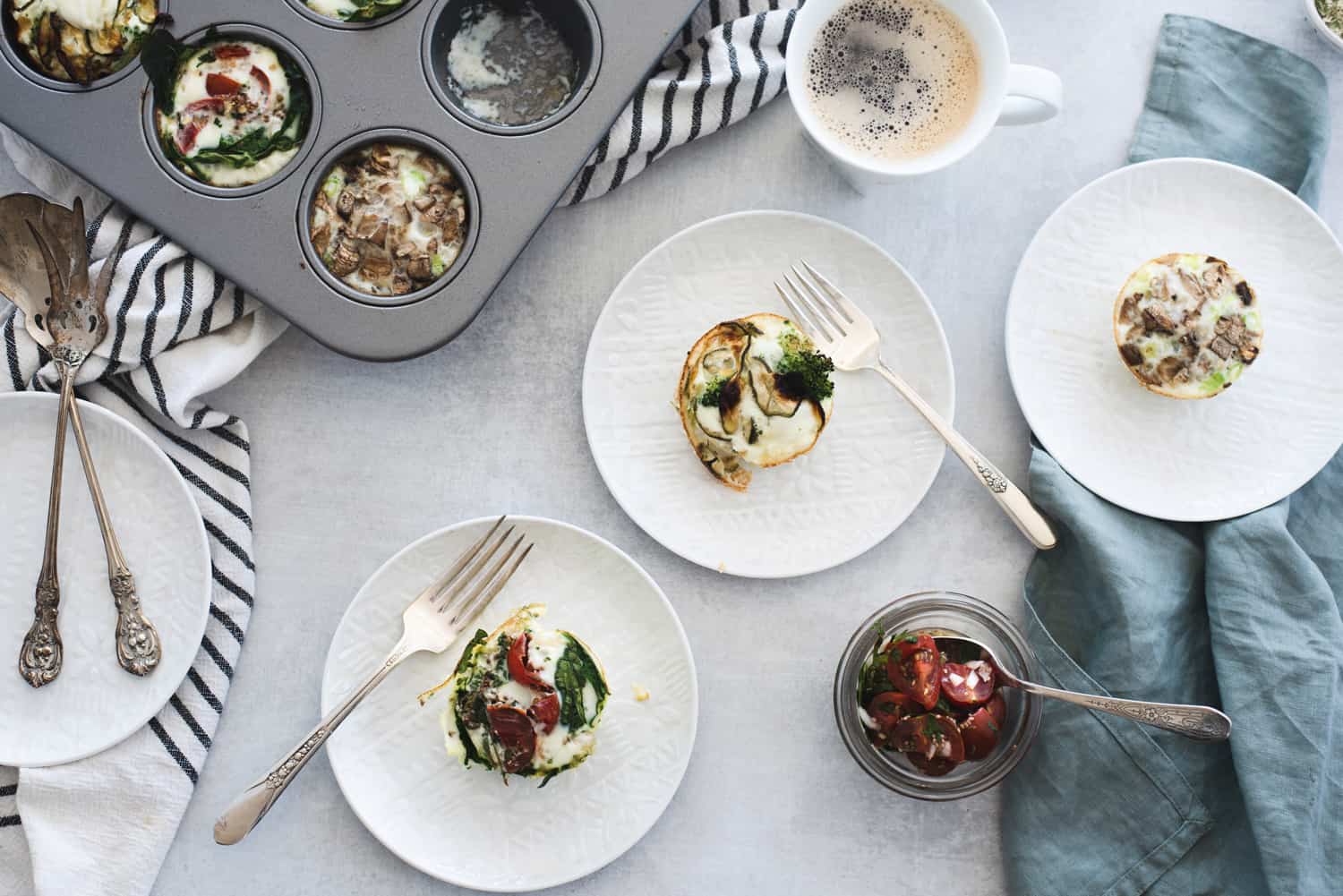 Quiche can even be made with egg whites to make a more cholesterol-friendly option. It's great whether you are making it for a small brunch or as an appetizer to be added to a buffet when entertaining. Egg-white quiche is especially nice when paired with a fresh garden salad. 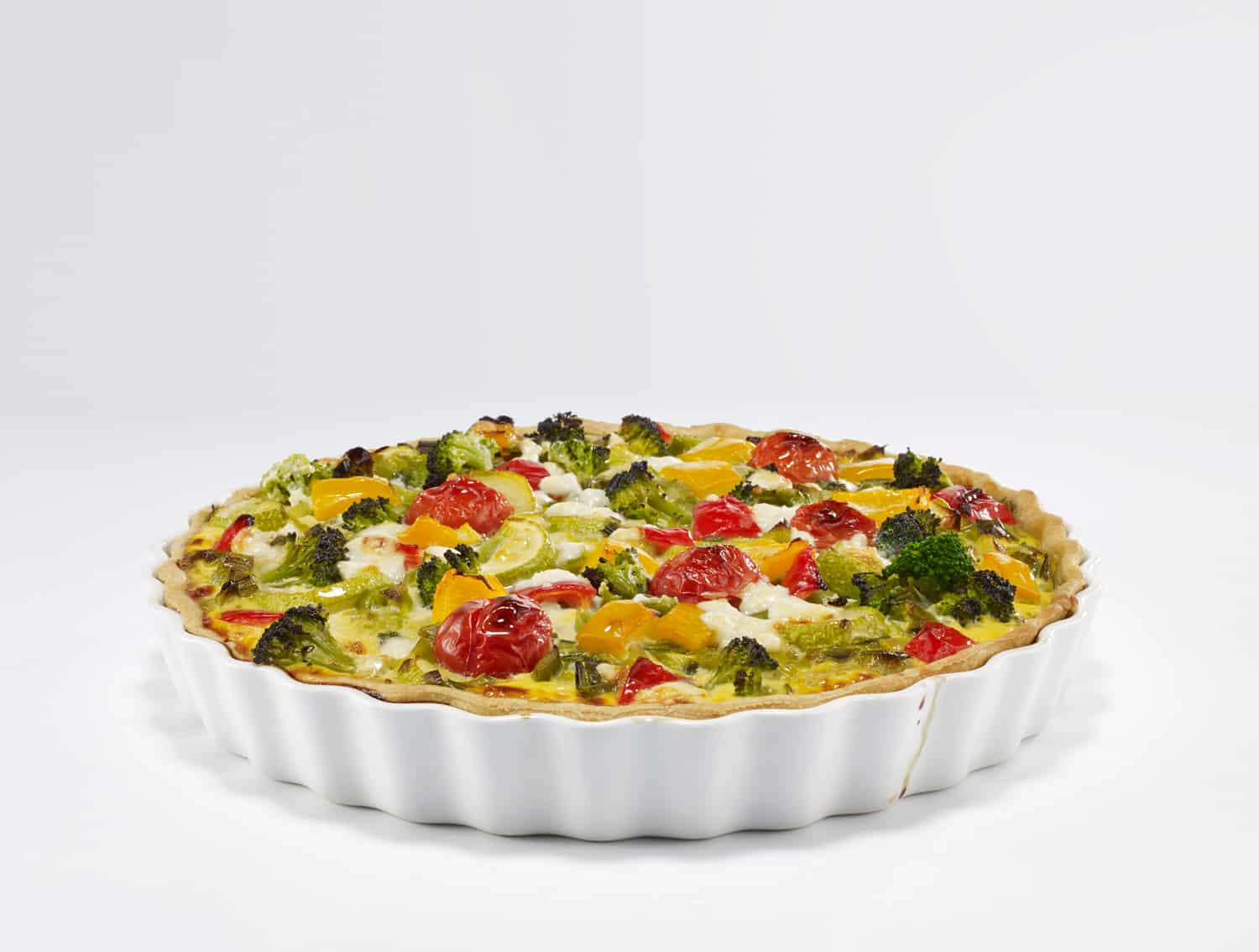 The best thing about making quiche is that nothing is absolute. since they are savory, it is a great opportunity to sneak in your daily helping of vegetables. Much like the scrambled egg-type filling that makes up its base, when making a quiche you can toss in any type of cheese, meat, or vegetable that you find in your refrigerator.  You can take kind of an "everything but the kitchen sink" approach and you might end up with something amazing no one else has discovered. 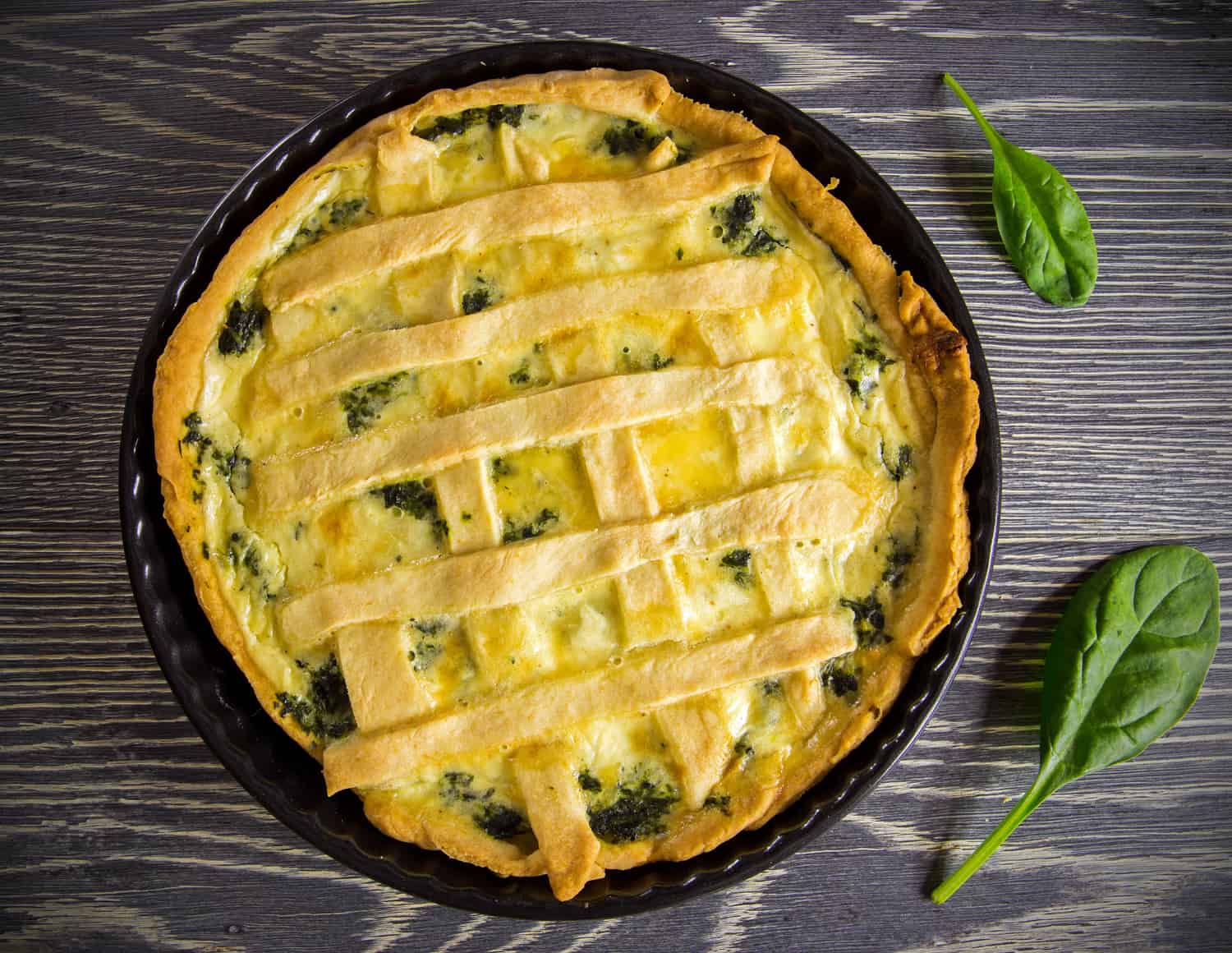 Remember that presentation is also important. So while quiche usually doesn't have a top crust, that doesn't mean it can't. By giving it a criss-cross crust like an apple pie you add a bit of flair that makes the whole meal feel more special. Plus, everyone knows the crisply cooked and perfectly browned top pie crust always tastes the best.

All of these quiches look and sound good enough to eat. But when you're done eating your proper healthy quiche and salad, it's important to make time for quiche's usually sweeter cousin, the tart. Let's talk a little bit about tarts and the variety of types you can make and the fillings you can use. Even though tarts can also be savory, we are going to concentrate more on the dessert possibilities they provide. 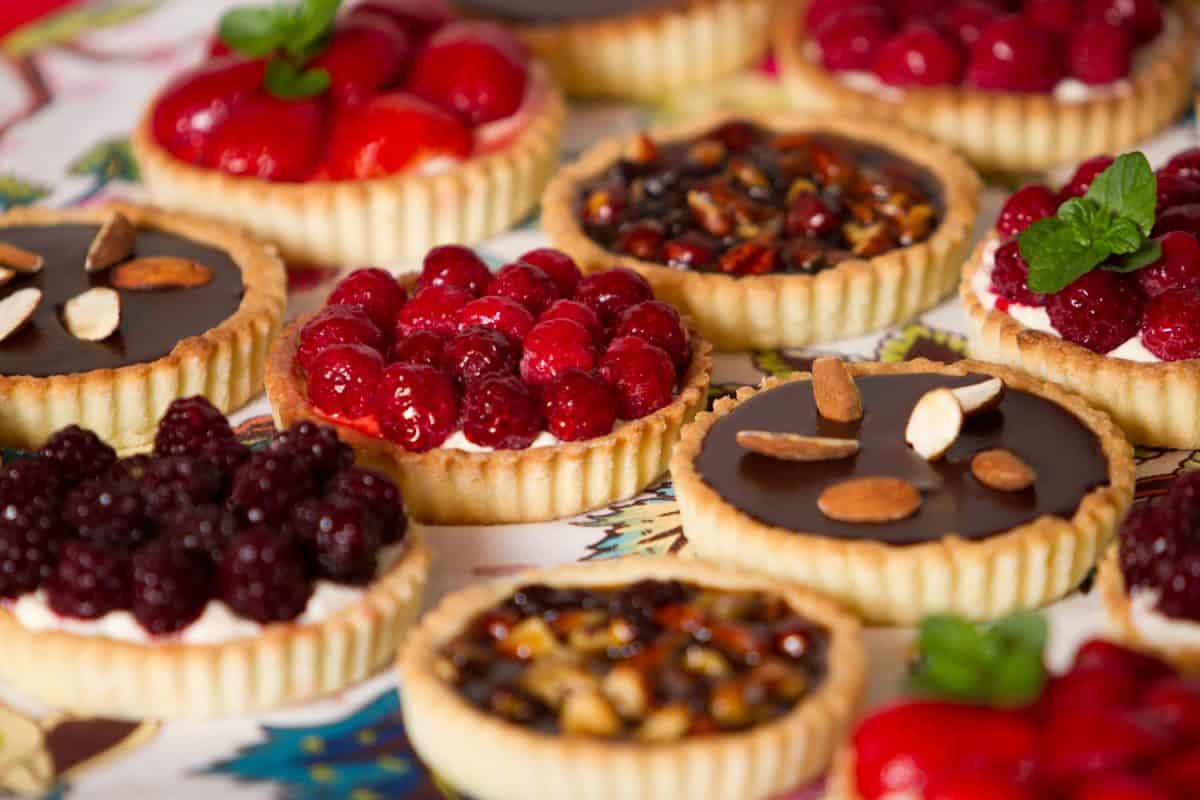 While tarts are more often sweet than savory like quiche, they are alike in the fact that you have almost limitless options when creating them. Some tarts use fruit, either as a filling or on top of the tart as a garnish and some are more like pies with other rich fillings. Let's talk about some of the different types you can make. 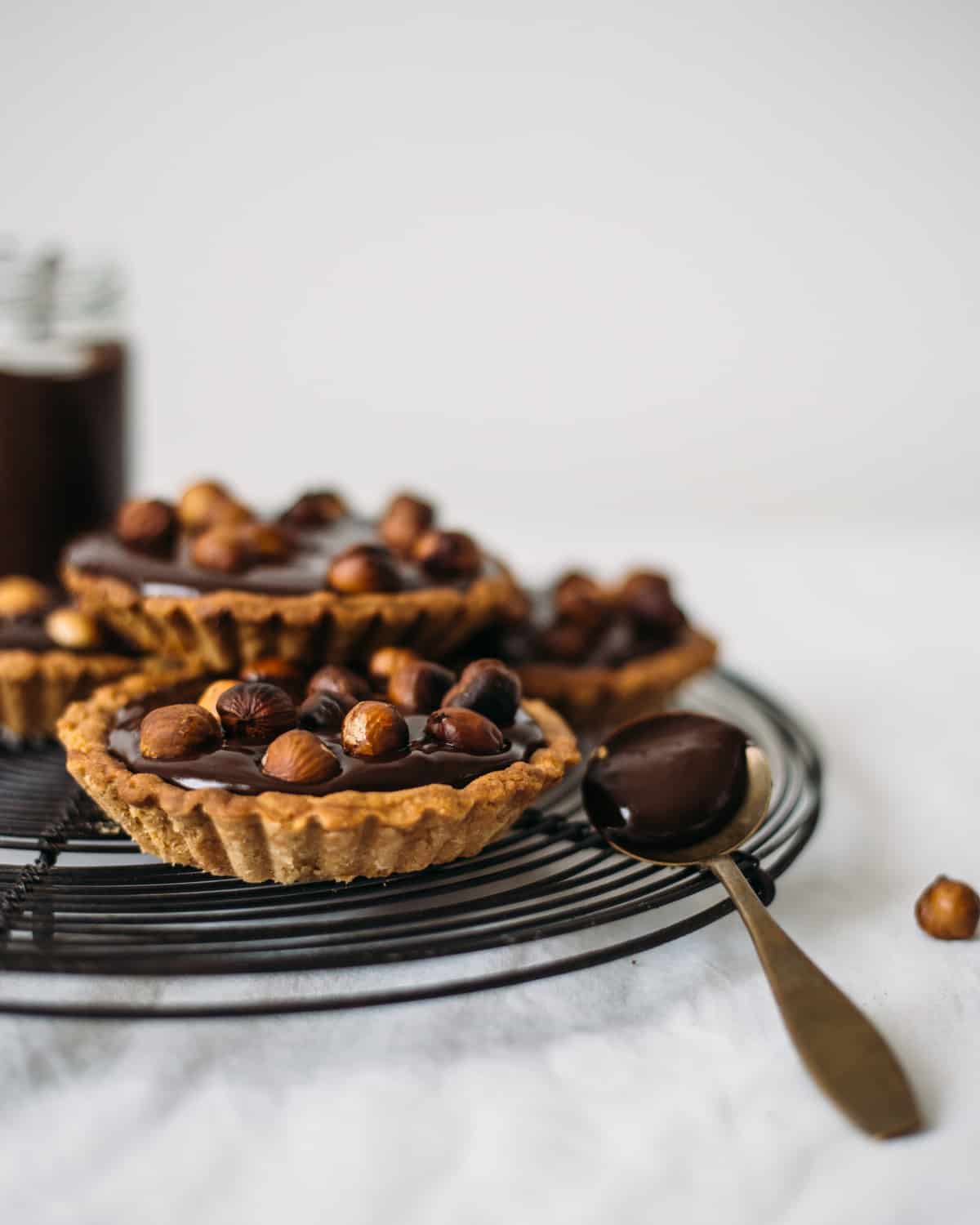 As mentioned above, a quiche is made with pie crust which gives it a more flaky texture while a tart has a slightly firmer pastry dough crust. This firmer crust provides a good base for the chocolate ganache when making a chocolate nut tart pictured above. 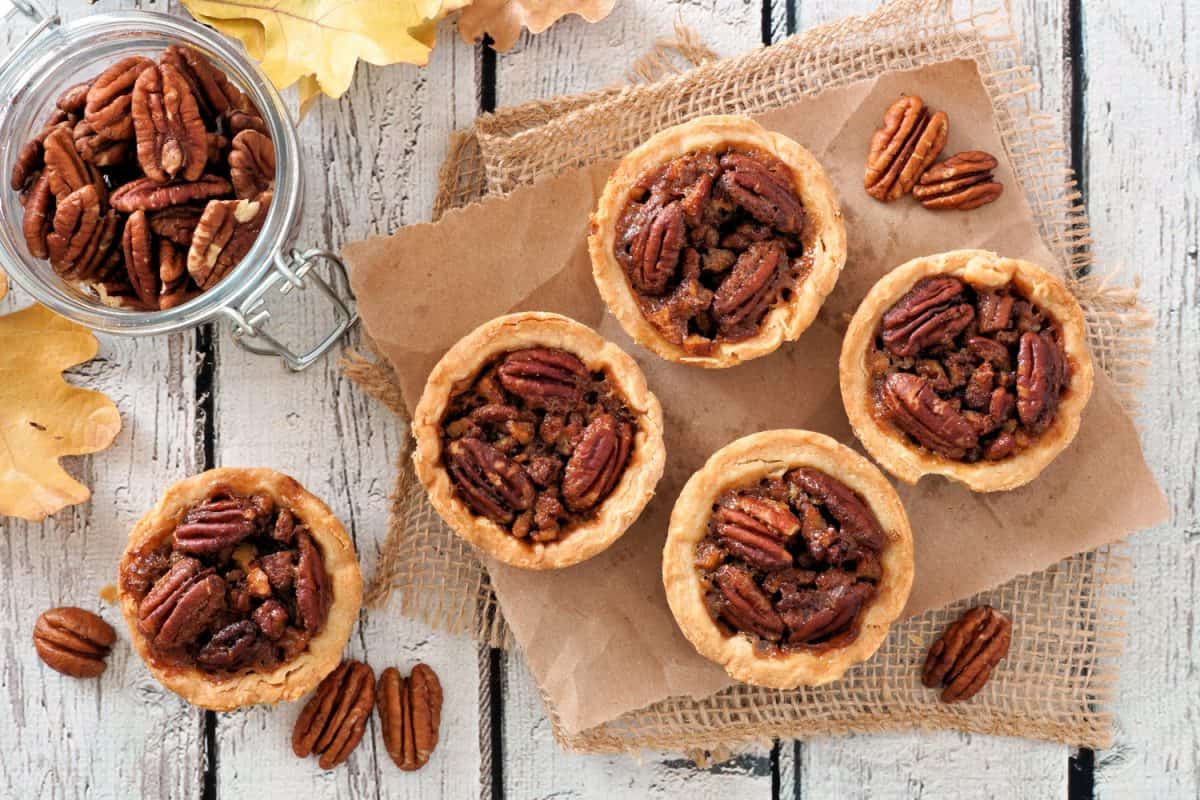 Pecan pie is a holiday staple but is very rich. A way to have the taste in a smaller package is these small but delicious pecan tartlets. This gives just the right amount of richness. As an added bonus, when you create a variety of smaller desserts, you allow your guests an opportunity to taste different kinds of tarts without feeling guilty about overindulging. 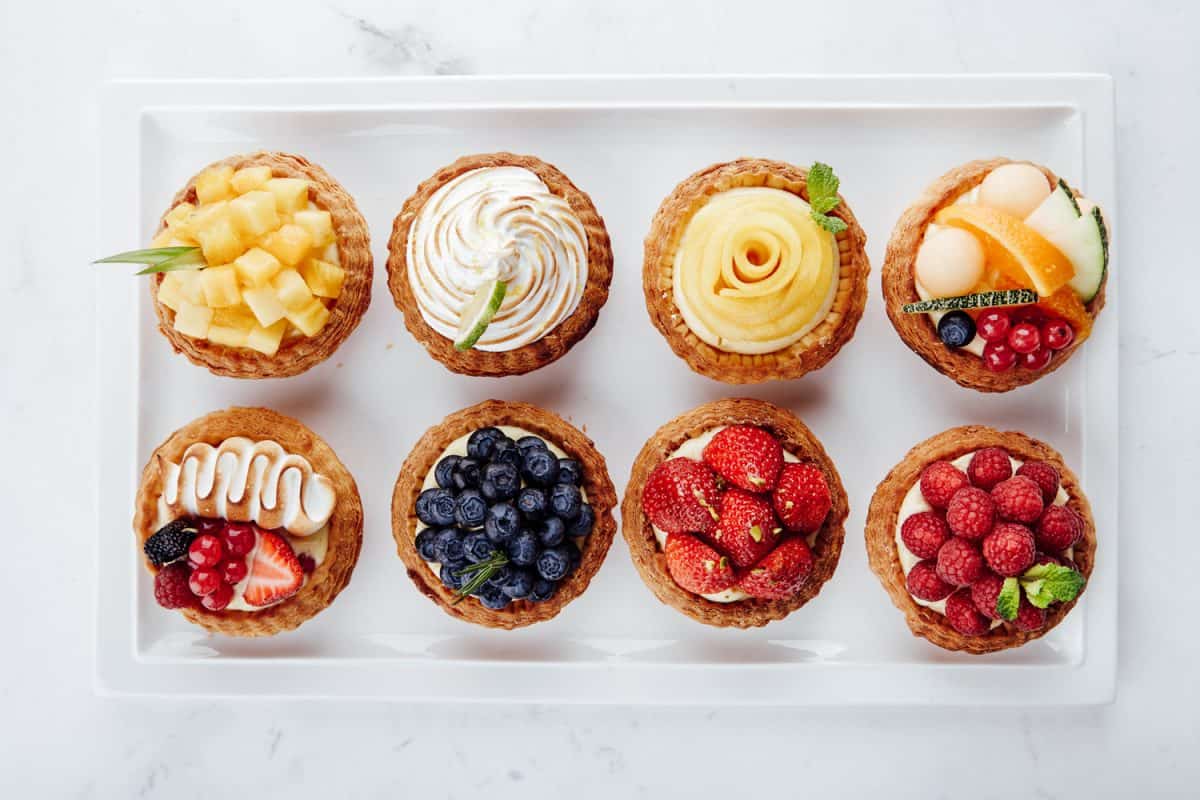 The fruit tart is one of the better-known types of tart, but these can even be made in more than one way. Most fruit tarts call for pastry cream that is then topped with one or more fruits of your choice.  They can also be made more simply with the crust filled with fruit preserves and topped with fresh fruit of the same type. You can find Ina Garten's recipe for this treat by clicking here.

Answers to common questions about tarts and quiche

Fruit tarts make an excellent dessert to serve after your quiche and salad lunch. You might even end up having a serious discussion on some of the often asked quiche and tart questions we discuss below. Continue reading and you'll be ready to show off your knowledge.

Is quiche considered a pie?

Whether a quiche is a pie is a hotly debated question. Okay, maybe not that hotly debated, but dictionary.com describes a pie as "a baked food having a filling of fruit, meat, pudding, etc., prepared in a pastry-lined pan or dish and often topped with a pastry crust."

Quiche is actually made with pie crust and a tart is made with a pastry crust, so according to this definition, even a pie isn't a pie but let's assume they use pie and pastry crust interchangeably. We would consider it to be a pie because it fits all the qualifications. Well, mostly. However, you will have to make your own decision on this.

Is tart the same as quiche?

As we discussed more above, tarts and quiche are very similar but have some differences. The main difference is that quiche is most often seen as part of a meal while tarts, even though they can also be savory, are still mostly thought of as a type of dessert. This may be because fruit is often chosen as one of the fillings.

The pastry crust used in tarts is also firmer than the flakier pie crust used in quiche so it presents a stronger foundation for the sweeter and richer fillings.  This firmer crust also makes the smaller dessert tarts easier to handle as the firmer crust doesn't flake or fall apart.

Are quiche and pie crust the same thing?

Quiche is made with the same recipe for the crust that is used when making a pie. The crust does take on some of the flavors of the ingredients which can result in the crust of a quiche taste slightly more savory than that of a pie which may make it seem like a different recipe.

What is the difference between flan tart and quiche?

When reading its description, you may think that a flan tart, which is sometimes referred to as a Parisian Flan, is the same as a quiche since it also contains a type of custard baked within a crust. However, even though the ingredients are similar, they don't become the same finished product.

In addition to the flan tart being sweet where the quiche is savory, quiche is considered to be part of a meal while a flan tart is definitely more of a dessert.

What is the difference between a tart pan and a quiche pan?

While there are real differences between a quiche and a tart when it comes to the pan you make them in, they are pretty much identical. The two names are basically interchangeable in their descriptions.

The more modern pans for quiche and tarts are metal and have a removable bottom to make it easier to remove the quiche or tart from the pan while preserving its smooth edges. This is used more when you want to have your masterpiece displayed outside of the pan.

Another option when purchasing a tart or quiche pan is to choose something more decorative like this beautiful ceramic pan with flower detailing.  In this case since the pan itself, with its bright color and delicate pattern, becomes part of your presentation, and you would serve the quiche or tart directly from the dish. 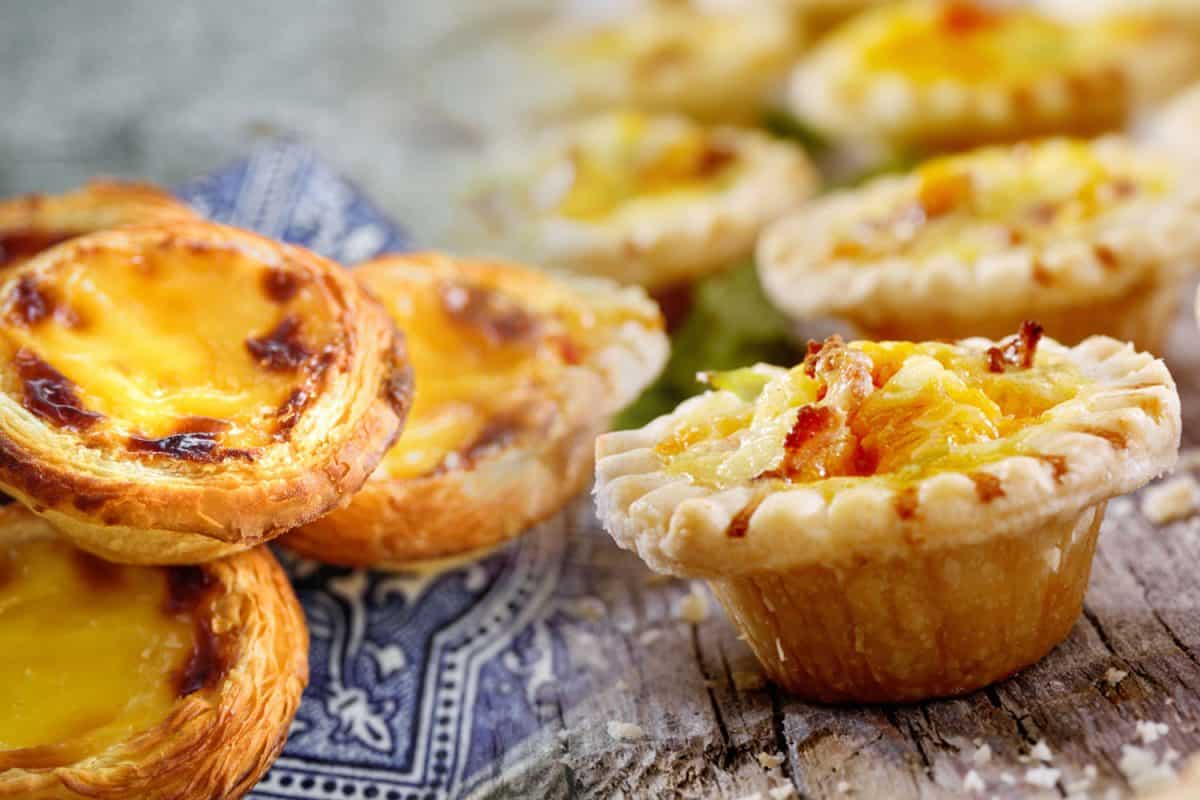 Now that you have answers to your questions about tarts and quiche and their differences and similarities, you're all ready to host the perfect brunch.  To help you expand your knowledge even more we have some advice on what side dishes will round out your menu perfectly at 'What Do You Serve With Quiche?

You can also check out What Can I Substitute For Milk In Quiche? if you don't have any milk but want to try out that new quiche pan you were inspired to buy.

Can You Have Rice With Lasagna?

Do You Have To Wash Corn On The Cob?