If you're on this page, it's likely that you went to open your dishwasher door and then panicked when you couldn't get it to open. Well, don't panic anymore because we've researched what to do in this situation and have the answer for you.

To open a dishwasher door stuck closed, first make sure there is no lock keeping the door closed. Some dishwashers have a child lock or control lock, which will prevent the door from opening. If a lock isn't the cause, you will need to manually open the door using a pair of vice grip pliers and an Allen wrench. Slide the Allen wrench along the top and use it to locate and lift the door's latch.

Now you have a general idea of how to open your dishwasher door, but keep reading as we go over this in more detail. We'll also answer some other questions you might have about your dishwasher and its door.

How To Open A Stuck Dishwasher Door

As appliances age, it's not uncommon for problems with their parts to occur. Unfortunately, one common issue with a dishwasher is the door getting stuck. The good news is, your dishes won't be trapped forever. If the door is stuck, it's likely because of an issue with the door lock, the door latch, or the door handle.

The door lock isn't a feature that every dishwasher has. However, newer models often do include this, which might be the simplest reason you aren't able to open the door.

Sometimes, it will not be a single button but rather a combination of buttons held down for several seconds. (See the image above for an example of this.) If your door doesn't open because the lock is on, hold down the button or buttons to turn it off.

You might feel silly not realizing the door was just locked. However, this is the best-case scenario reason the door might be stuck. If it isn't due to a lock, you might have a broken latch or handle.

What is a control lock Maytag dishwasher?

The control lock on a Maytag dishwasher locks all the buttons on the control panel. This way, they cannot be pressed unintentionally or by small children in the house. It can be activated while the dishwasher is running or when it's not to prevent it from being turned on.

If the door latch has become misaligned or grime has caused it to become stuck, the latch may be the reason your door won't open. A good indicator that the latch might be the problem is if you had trouble closing the door, to begin with. It's pretty easy to open a door that is stuck because of the latch. Grab each side of the door, and using a little strength, pull the door open.

How do I test my dishwasher door latch?

Fortunately, replacing a dishwasher latch can be done relatively easily. Check out this YouTube video for directions:

Take a look at the door handle and visually inspect it for any damage. To open a stuck door with a broken door handle, you will need a long Allen key and a pair of vice grip pliers. Using the angled end of the Allen key, slide it along the top and hook the latch so you can open the door.

This YouTube video will show you step by step how to open the door when the door handle is broken.

How do you realign a dishwasher door?

If you've noticed your dishwasher leaking or your door looks crooked, it might be misaligned. Commonly, doors become misaligned when they come off of one of their hinges. If this is the case, you need to open the door, inspect the hinges and lift the door back on if it has indeed come off. You might hear a loud click once it is back in place. 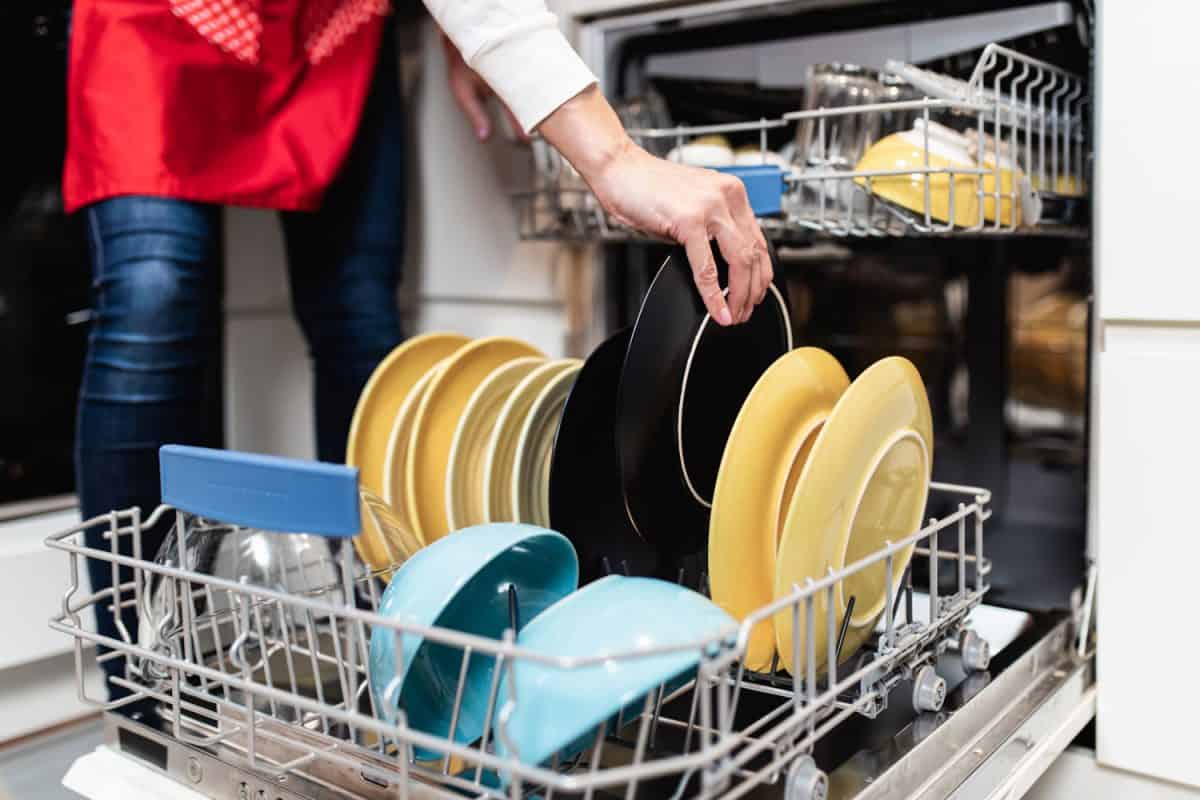 If the hinges don't seem to be the issue, you may need to gently bend the frame to get the door to shut correctly. This solution is most often used during a machine installation. For a visual aid on how to do this, check out this short YouTube tutorial:

Your dishwasher has more than one "door," and just like problems might arise with the main one, you might also have issues with the detergent door too. Here are some reasons your detergent door won't close:

The Dishwasher Is On

If your dishwasher is still on from the last load or you've just already powered it on, it may be stopping you from closing the detergent door. The detergent door will often only latch closed if your machine is off. This may not be the case for all makes and models because there are so many variations, but this does apply to GE Dishwashers.

Something Is Blocking The Latch

A simple problem that might be preventing you from closing the dispenser door is a clogged latch. Check to make sure there are no pieces of food or detergent buildup blocking the latch. Use a damp cloth or an old toothbrush to remove any grime from around the door and its latch to see if this resolves the issue.

The Detergent Tablet Is Blocking The Door

If you've already put the detergent tablet or pod into the dispenser, make sure it fits inside correctly. Incorrect placement of the pod might be blocking the door from closing.

The Door Is Broken

The most inconvenient issue is that your dispenser door is broken. If the latch or door itself is warped or damaged, you will likely have to replace the dispenser completely.

If the door is broken, you should be able to diagnose it simply by a visual inspection. The good news is that replacement parts are typically quite affordable and easy to install yourself. Just make sure to purchase one that will fit your make and model.

How long should a dishwasher last?

Most dishwashers should last around ten years. Consumer Reports did a study that revealed 30% of the surveyed people had issues with their dishwashers in the first five years. So it doesn't mean your dishwasher will last an entire decade without any problems, but a well-maintained dishwasher should make it ten years before needing to be replaced entirely.

There are some thorough guides out there on the internet that will help you get the most life out of your dishwasher. However, some of the most popular recommendations include:

Also, make sure to keep and read your owner's manual. We know reading a manual might seem tedious, but they often offer tips on properly cleaning and maintaining your machine!

For some common questions answered about what can and cannot go in a dishwasher, check out some of our other blog posts:

Hopefully, our article has been helpful and shown you how to open your stuck dishwasher door. If you still can't seem to get the door open, it may be time to call the repairman. With any luck, your dishwasher door will be open in no time, and you can put the thought of having to wash dishes by hand behind you!

How to Clean Your Air Fryer Basket [Inc. in a Ninja]

Where To Store Cutting Boards In Your Kitchen