A Dutch oven is a unique, useful cooking pot with a tight-fitting lid while Crock Pot is a popular slow-cooker brand. You might be wondering if either of these appliances can support a loaf pan, which is just a traditional bread pan. We have thoroughly researched if you can put a loaf pan directly into a Crock Pot or Dutch oven.

Since loaf pans are available in different materials, they can be used inside a Crock Pot or Dutch oven. This can help you cook smaller portions of food, as well as unique shapes. However, ensure the loaf pan is oven-safe. Also, be sure not to use any pan materials that might scratch or damage either cookware.

It is possible to bake bread without the traditional methods, but it is still important to use creative approaches properly. Both slow cookers and Dutch ovens are popularly used for baking bread. Keep reading to learn how to use bread pans inside other cookware, the results, and how to make bread without a typical Dutch oven. 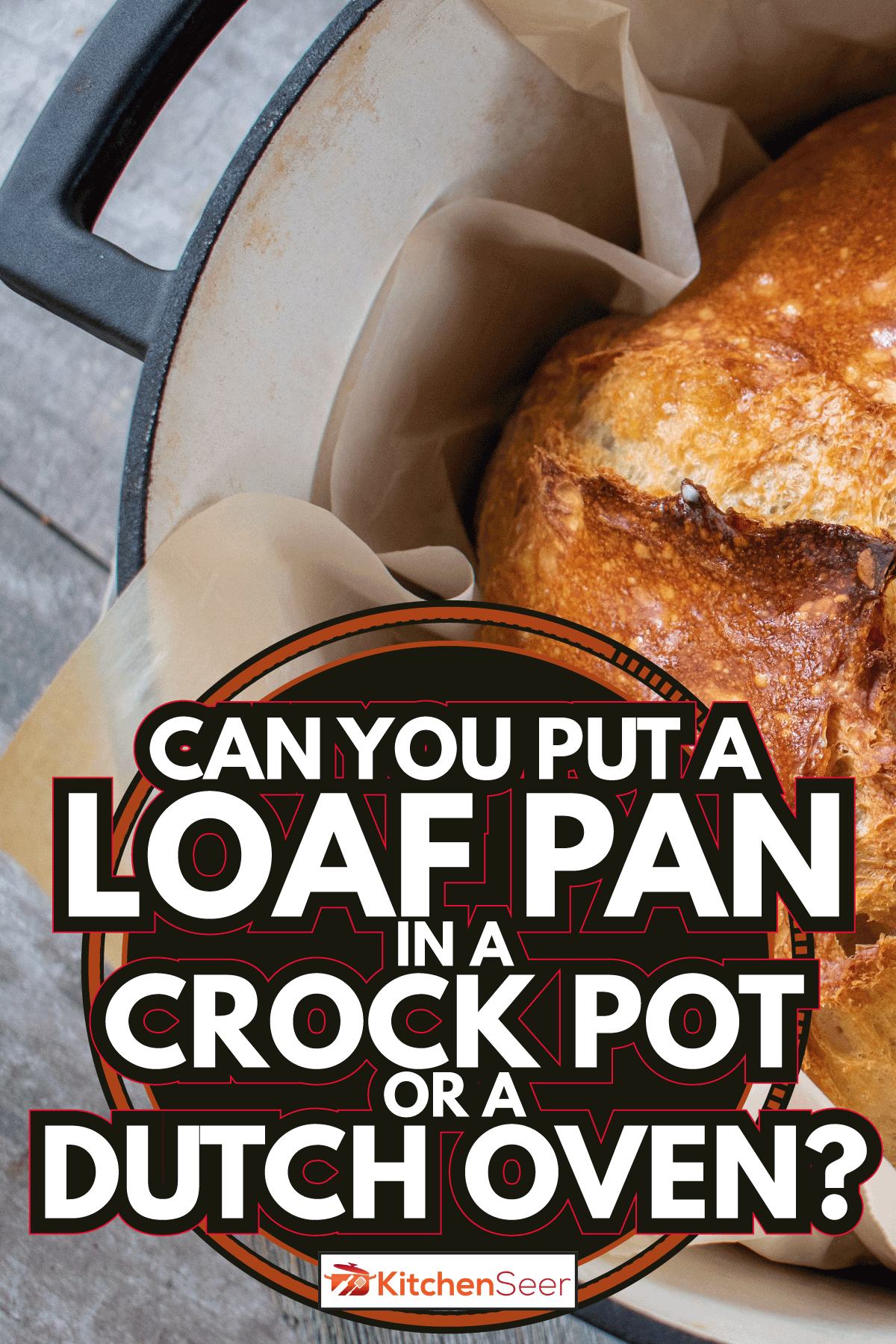 Can you put a loaf pan in a Dutch oven?

As long as the loaf pan itself is oven-safe, you can cook it inside the Dutch oven just as you would with a larger, ordinary oven. Dutch ovens are heavy pots with thick walls and a tight lid. They are also safe to put inside a traditional oven. So, use Dutch ovens for baking many types of bread.

The Dutch oven design creates enough steam to help the bread dough rise and remain moist throughout the process. This will allow you to create an airy bread loaf because the crust won’t harden before the bread has had a chance to bloat fully. 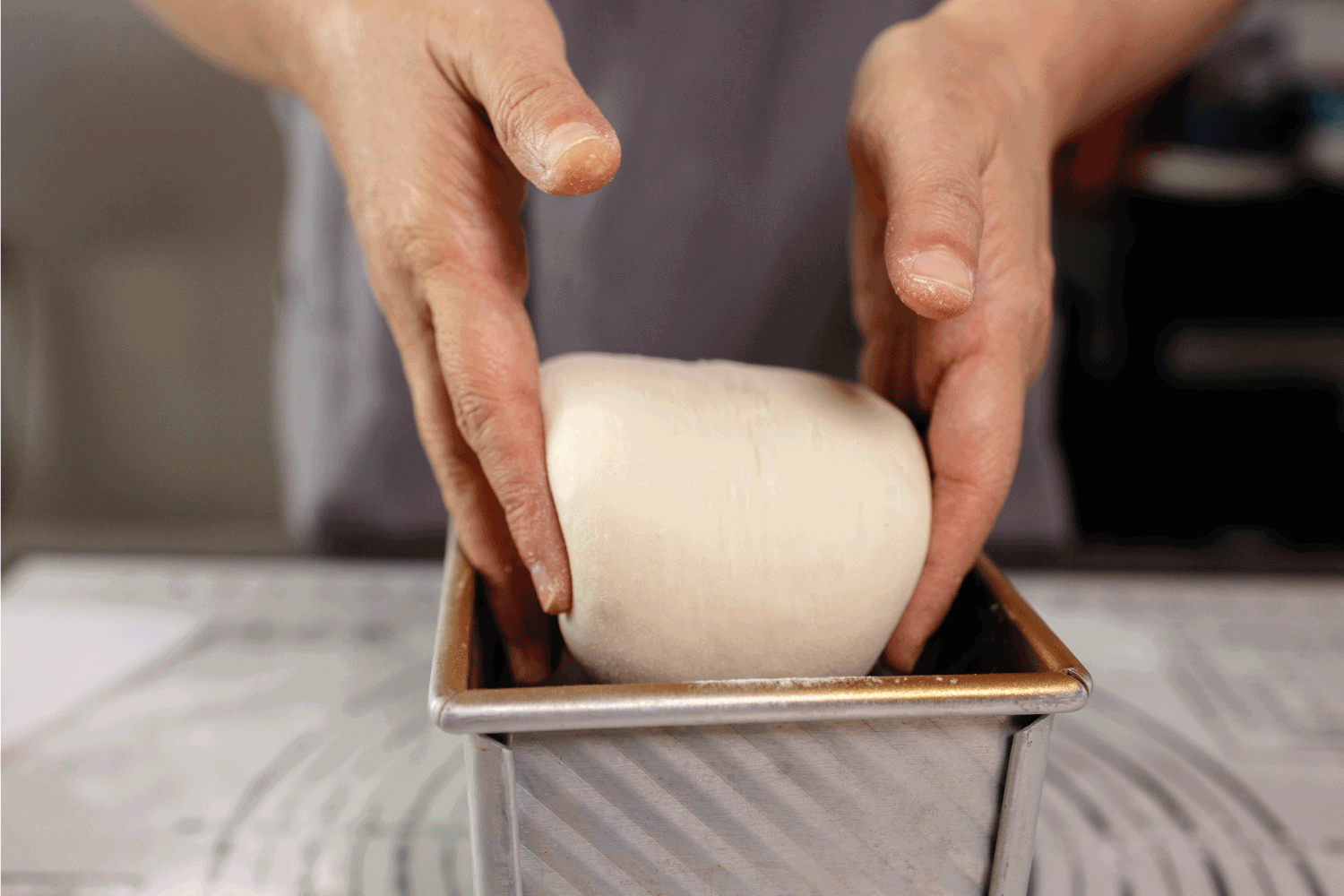 Specialists such as Uno Casa advise that Dutch ovens are also known to make a perfect, flaky crust consistently. The oven can be preheated, which allows you to introduce steam inside the lidded pot quickly. The moisture inside the dough will immediately steam up the pot, and steaming the dough is crucial in the early minutes of baking.

These advantages are the reason Dutch ovens are frequently used to create artisan bread, in addition to ordinary loaves. As such, it may sometimes be more ideal to bake artisan bread recipes inside the Dutch oven.

Using a loaf pan inside the Dutch oven will allow you to make whatever shape, texture, or quantity of bread that you personally want. You won’t be restricted to the size and shape of the Dutch oven itself. This freedom will be supported by the oven’s unique ability to use steam.

The cleaning process for Dutch ovens can be difficult unless you have an enameled finish. Traditional cast iron Dutch ovens demand frequent maintenance and need to be seasoned.

Using pans inside the Dutch oven will save you the trouble of cleaning the oven since only the loaf pan will be dirty. Also, Dutch ovens are notoriously heavy. It will be much easier to transfer the bread pan when the dough is ready to be removed.

Will baking bread in Dutch oven ruin it?

No, baking bread will not ruin a Dutch oven or the dough itself. Instead, the Dutch oven is uniquely suited to bake bread on its own. Because you can preheat a Dutch oven, and trap steam inside the cookware with its lid, your bread will likely turn out especially well.

However, it is important to remember that some Dutch ovens are built with an enamel finish on top of the traditional cast iron surface. This enamel finish makes the Dutch oven easier for non-stick cooking, cleaning, and maintenance.

An enamel finish can also provide unique, colorful designs, which have made brands such as Le Creuset famous. You can read the post "Can A Le Creuset Pot Go In The Oven?" to make sure the oven is treated correctly.

But the enamel finish can be damaged so you cannot use a metal loaf pan inside an enameled Dutch oven, or you will risk scratching the finish. Even worse, chipped enamel bits might end up in your food.

It can also be costly to repair, even with warranties. The manufacturer has to decide that the damage falls under the warranty, to begin with. But some companies can insist that you ship the product to them yourself, which is especially pricey if you purchased overseas.

For example, Le Creuset’s warranty mentions that they won’t cover “any use not in accordance with the cookware instructions.” Consider reviewing your cookware's warranty and instruction manual prior to using a loaf pan inside.

What can you use instead of a Dutch oven for bread?

Dutch ovens can sometimes be too expensive. This is especially true if you do not plan on regularly baking bread, or you are only a beginner experimenting in the kitchen. Fortunately, there are a number of alternatives that can bake bread effectively enough.

Can I use a Crock Pot instead of a Dutch oven?

If you want to bake bread, a Crock Pot slow cooker is generally considered the best replacement for a Dutch oven. It operates in the same way, using a lid to trap all of the heat and steam inside the pot. However, it is powered by electricity rather than used with a traditional oven.

Specialists such as Food Cheats have agreed that putting Pyrex inside of a slow cooker is both safe and effective. They advise that you can separately boil water, and then use that to partly fill the Crock Pot.

Then, as long as the Crock Pot is still able to shut its lid, you would be free to fill the pot with multiple pieces of Pyrex. This allows you to cook different recipes at the same time if the Pyrex pieces are also covered. 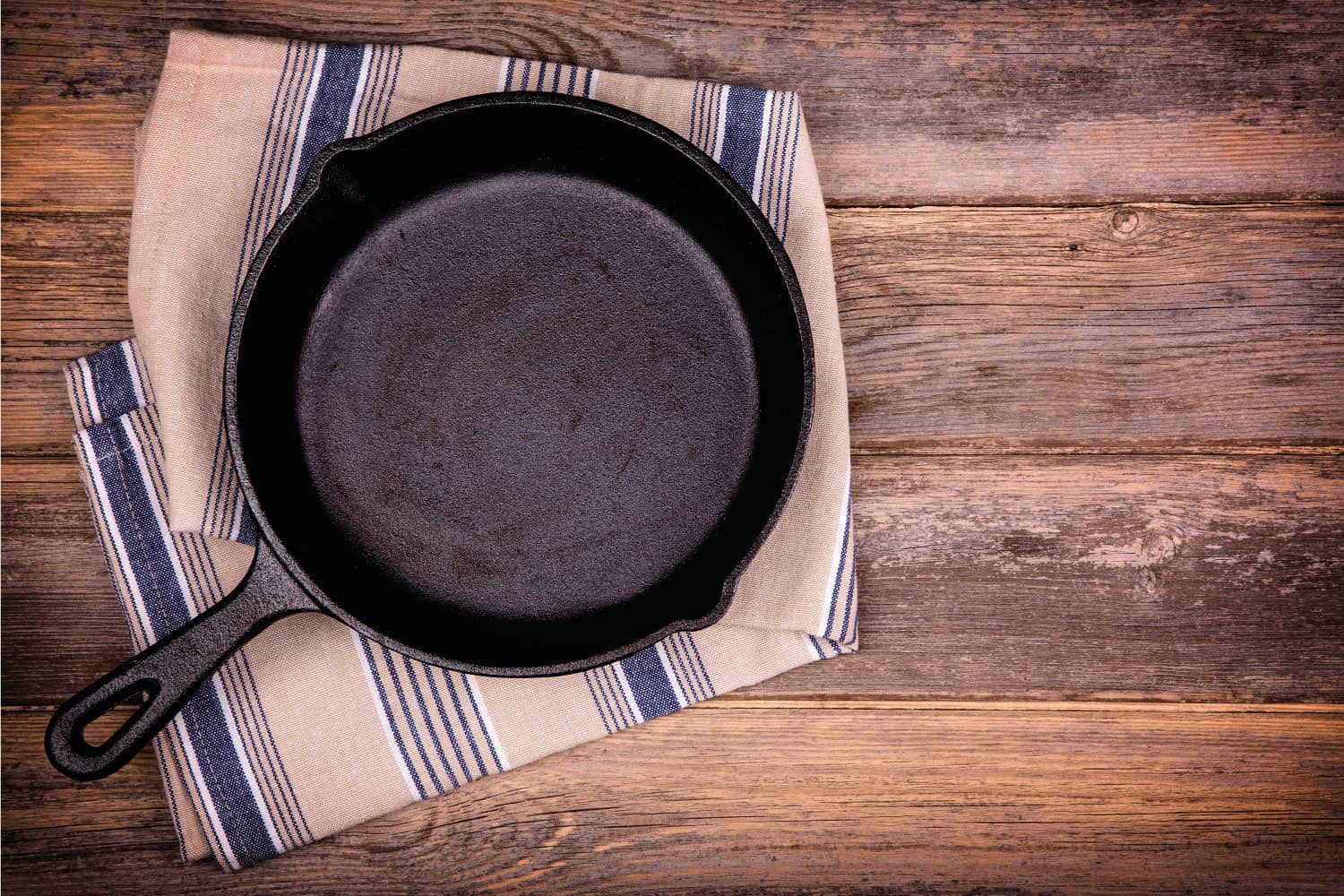 Because cast iron skillets are able to withstand sudden temperature changes, a pair of these skillets can be used to bake bread. Cast iron skillets need to be seasoned, but they have the same heavy, thick walls that a Dutch oven provides.

You can read the post "How Often Do You Season A Cast Iron Pan?" for tips on providing the proper maintenance for your cast iron skillets.

Both cast iron skillets should be able to fit in the traditional oven. One pan may be used to bake the dough, while you add water or ice in the other pan. This will essentially trap steam inside just like a Dutch oven, only on a larger scale. 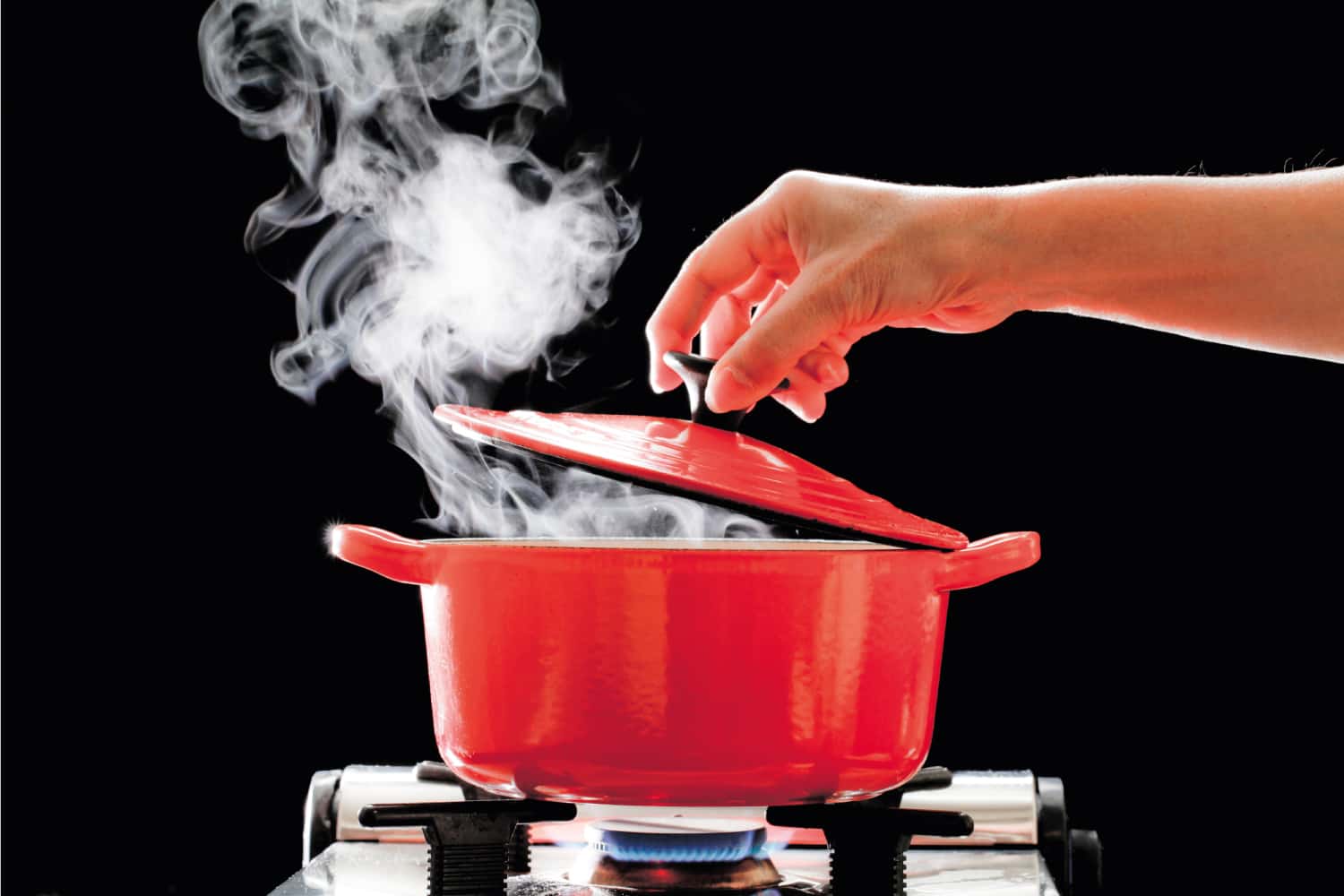 You can use a metal, oven-safe soup pot with a traditional kitchen oven too. However, you will have to do more to recreate the conditions of a Dutch oven.

Unless the soup pot has an oven-safe lid, you may have to use aluminum foil or a disposable aluminum baking tray to cover the pot. This will trap the steam inside the bread more effectively.

You can also use a baking stone to create more consistent heat. A baking stone is simply a large flat slab, which is usually made of stone or ceramic. It has an unusually high capacity for heat, and can also store it consistently throughout the baking process.

A baking stone can also be preheated, just like a Dutch oven is preheated so that temperatures are evenly distributed when you bake.

Click here to find this baking stone on Amazon.

As long as a loaf pan fits and is oven-safe, you can safely use it in a Crock Pot or a Dutch oven, as you would a traditional kitchen range oven. However, baking bread is a delicate process, especially if the recipe calls for artisan techniques.

A Dutch oven is usually the best choice for this task. But it may be a little too expensive or unwieldy for you. You can find effective alternatives such as covered metal pots, cast iron skillets, or simply an electrical Crock Pot.

Can You Make A Souffle In A Glass Dish? Should You?

How Often Should You Wash A Frying Pan?

How Big Should A Charcuterie Board Be?