Flavorful home-cooked meals are only a few hours away when you use a smoker. You can cook just about anything in there. However, what if you want to use a glass or Pyrex dish in a smoker? Can it work? If that's your concern, let's discuss the details.

So, it's safe to use glass or Pyrex dishes there. If you care about its appearance, avoid using it in the smoker; it can potentially stain the glass.

For some, a simple yes or no answer isn't enough. What are some of the things that could happen if you put a glass dish in a smoker?

In addition, can the glass explode in there? These are some of the concerns we'll explain in detail. To learn more, keep reading.

Is It Safe To Put Glass Or Pyrex In A Smoker?

There's a reason why we're careful about putting glass in a hot environment—it can explode. No one wants to suffer an avoidable situation. 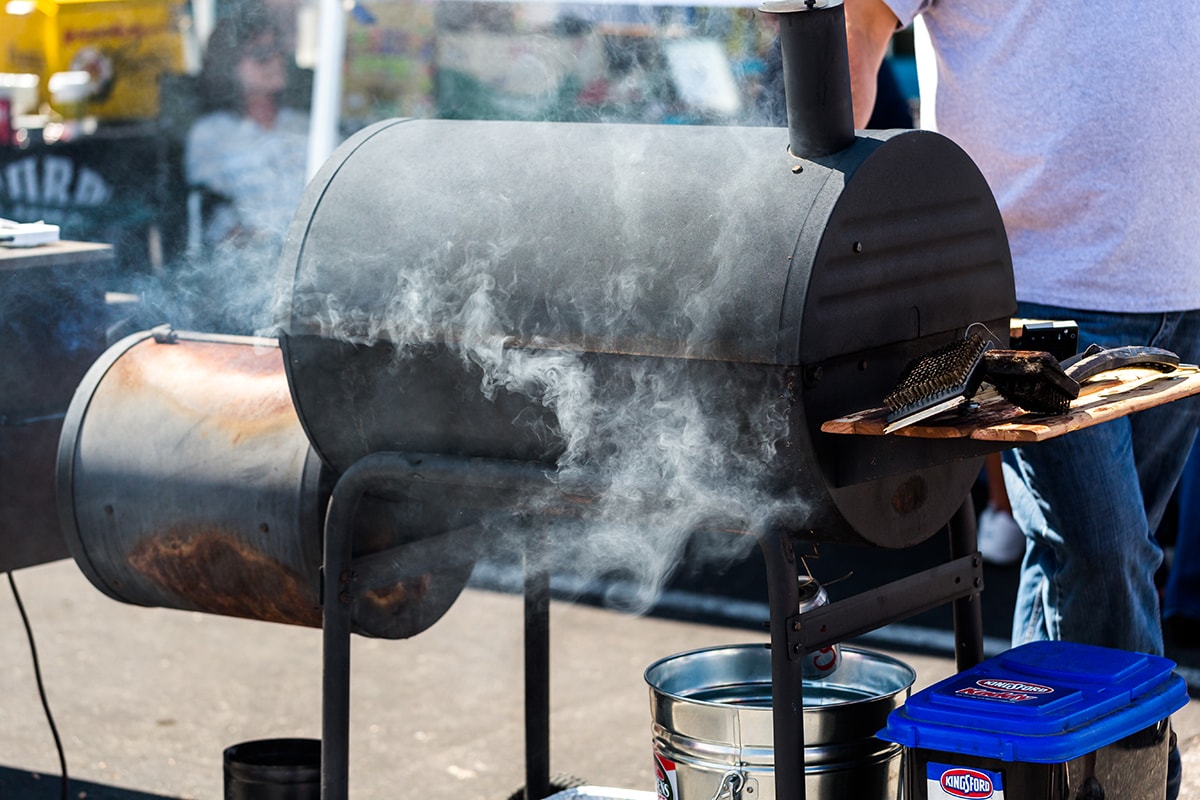 So, is it safe to put glass or Pyrex in a smoker? The short answer to that would be yes. However, it's safe if you follow the same safety procedures as when using glass in an oven.

In other words, don't expose the glass dish to extreme temperature differences.

Otherwise, it will explode in a smoker just like it would in an oven. Of course, we should never make statements without backing them up first.

If you'd like to explore this further, let's get into the nitty-gritty details of why it's safe and what you should avoid doing.

How Hot Does A Smoker Get? 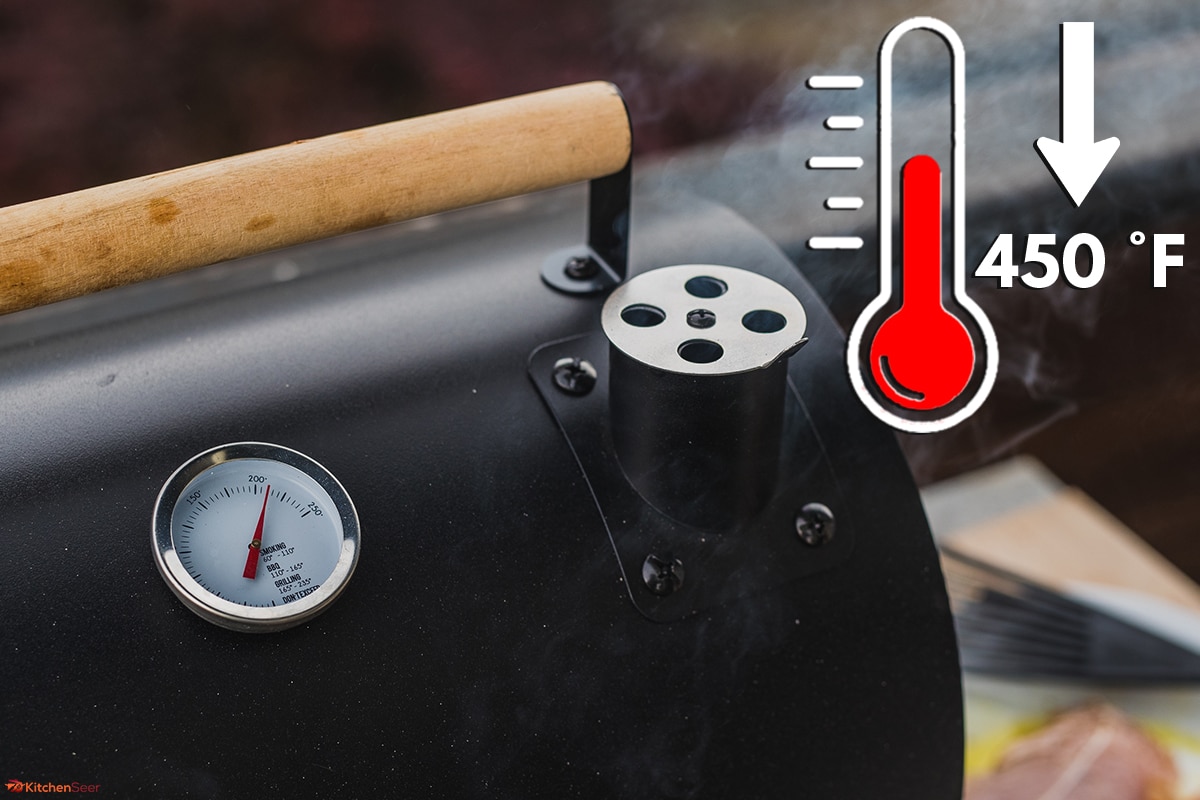 First, let's start with how hot a smoker can get. In most cases, it's comparable to an oven. In other words, it typically doesn't get hotter than 450 degrees Fahrenheit.

Some smokers can achieve higher temperatures, but those are usually smoker and grill combos. Nevertheless, most smoker recipes don't utilize temperatures higher than 350 degrees Fahrenheit.

The temperature to smoke meats and poultry range around 225-300 degrees F. Since it doesn't get hotter than an oven, we can assume it can't be riskier to put a glass dish in a smoker. Still, let's dive deeper into why it should be safe.

What Temperatures Can Glass Or Pyrex Withstand?

Before you expose any glass to heat, it's crucial to determine what you are using. Not all glass dishes are safe to use in high-heat environments.

The two types of glass you can safely use in smokers are tempered soda-lime and borosilicate glass. If you own a Pyrex glass dish, it can fall into one of those two categories.

Tempered soda-lime glass is capable of withstanding temperatures up to 470 degrees F. As we can see, it can handle temperatures higher than a smoker can reach. For this reason, you're clear to use it in there.

If you have a borosilicate glass dish, you can safely use it in a smoker. It can withstand about 400-450 degrees Fahrenheit.

Keep in mind more manufacturers still produce borosilicate cookware in the US—OXO and Borolux are some examples.

Now let's summarize why it's safe to use glass or Pyrex in a smoker. First, smokers usually don't exceed temperatures past 400 degrees F. So, it's comparable to an oven.

Thus, as long as the glass dish in the smoker is tempered soda-lime or borosilicate glass, it's safe to use.

If the dish you own is not tempered soda-lime or borosilicate glass, avoid using it. Standard glass has a low thermal shock resistance. In other words, there's a higher chance it'll explode once you take it out of the smoker.

How Does Glass Explode? 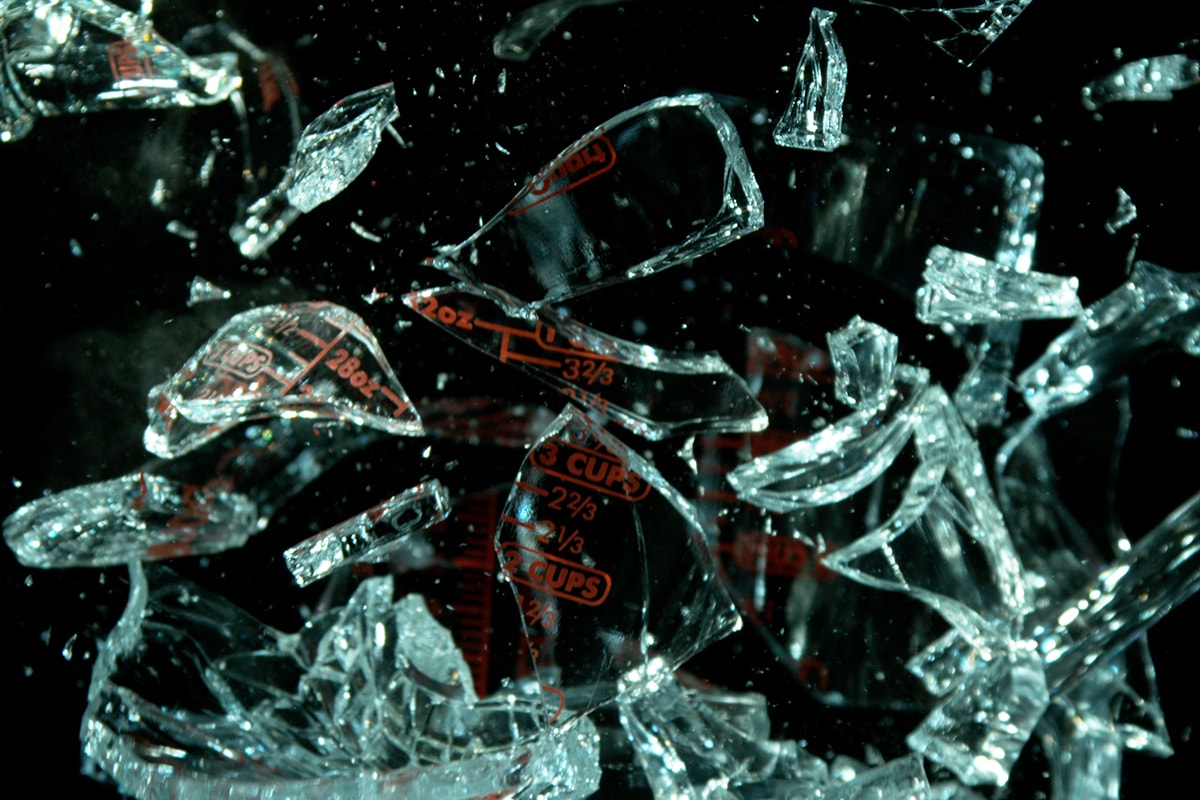 There's a reason people would question the ability to use glass in a smoker—shattered glass. There are many horror stories in the past with claims of glass cookware exploding after spending time in the oven.

With this much risk, it's understandable why people want to verify if using glass in a smoker is safe. If we want to prevent an accident like this, we should know why it explodes.

As Jane Cook—former chief scientist at the Corning Museum of Glass—stated in a New York Times article:

"Temperature itself isn't what causes stress. It's a difference in temperature from one part of the glass to another part of the glass ... And if there happens to be a critical flaw in that region of higher stress between the hotter and colder area, that's where it's going to break."

In other words, a combination of surface damage and thermal shock makes glass explode. Surface damage is something we can't avoid. Various actions can leave microscopic cracks on the dish—intentionally or unintentionally.

However, we can do something about thermal shock. We should be more mindful of handling the glass dish before and after it spends time in the smoker.

More specifically, avoid setting it over a heat source directly; it won't be able to handle the rapid temperature change. We don't have to worry about this in a smoker because smokers use indirect heat.

Next, it's essential to preheat the smoker before putting the glass or Pyrex inside; this is standard practice for most smoker recipes.

Thirdly, consider the food you're preparing; will it release liquids? If you answer yes, Pyrex suggests adding a small amount of liquid to cover the bottom of the dish.

This way, you can minimize the sudden temperature change when the food releases liquid into the dish. Once you take the glass out of the smoker, set it on a dry cloth, wooden trivet, or cooling rack.

From here, avoid adding liquids. The glass/Pyrex will need time to cool down before you can do that. Otherwise, the glass can potentially shatter or break.

As long as you follow these guidelines, you should have a good experience using glass in a smoker.

What Happens After Smoking Foods In A Glass Dish? 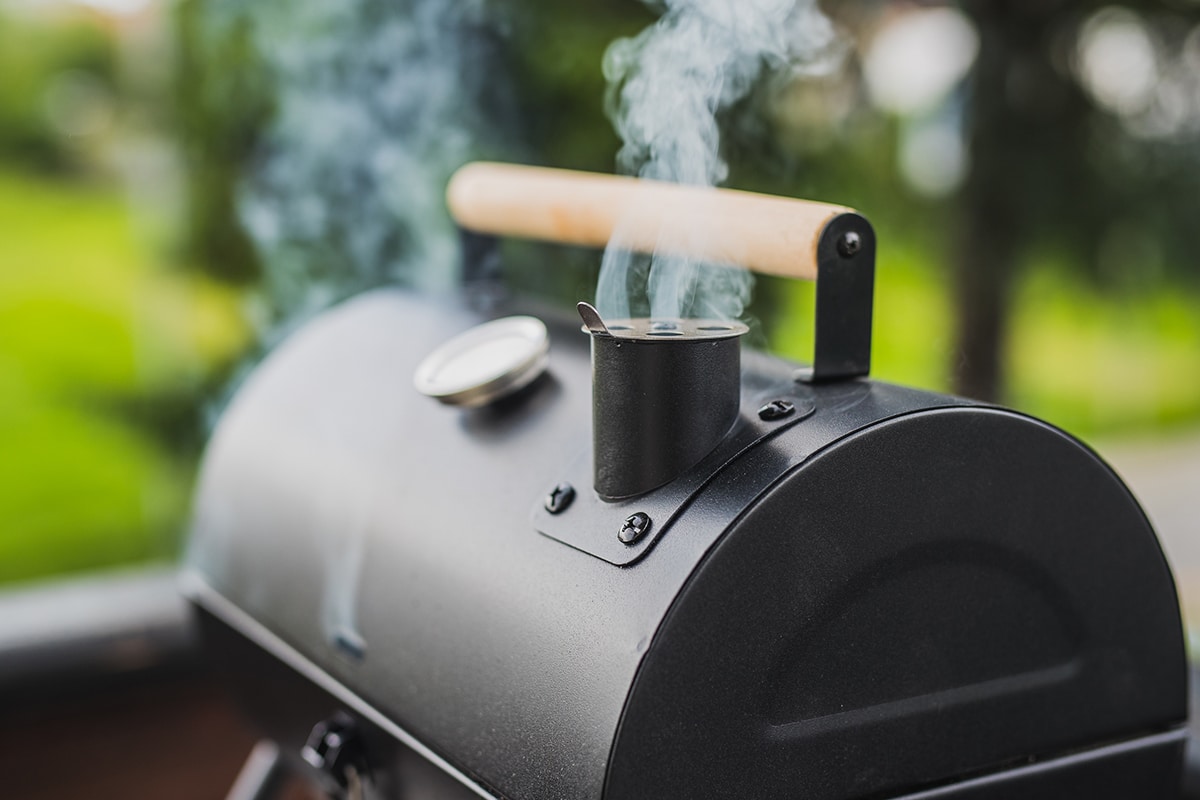 Now we should have a good idea of how to use glass in a smoker. Still, a few things can happen to the glass. It all depends on what you're cooking.

Unfortunately, most people have experienced a change in the color of their Pyrex or glass cookware. Some have been able to clean it with a bit of elbow grease, while others couldn't do it.

So, there's a 50/50 chance your Pyrex/glass cookware will become stained glass. It's not that big of a change, but it matters to some. Consider using something else if you like the look of your glass or Pyrex cookware.

Can You Put Glass Pyrex in A Traeger Grill? 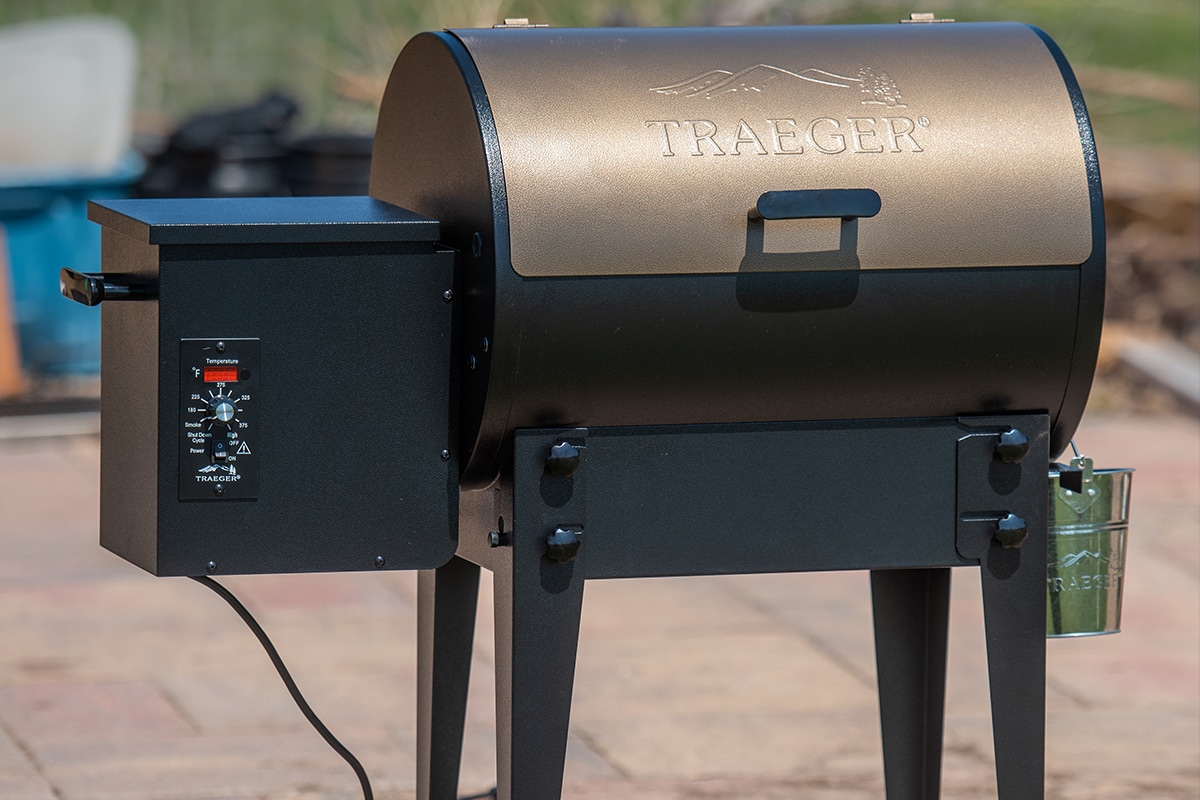 As mentioned, there are some grill and smoker combos—Traeger is one brand that sells them. So, if you own a Traeger grill, you might wonder if Pyrex can work in one.

Luckily, Traeger has an answer for this; they state: "As a general rule of thumb, any cookware or bakeware that is oven safe is also safe to use in a Traeger grill."

With this information in mind, we can assume Pyrex should be safe to use in one. Nevertheless, we should follow Pyrex's safety and usage instructions for the best experience.

More specifically, keep the glass away from the heat source. We want indirect heat, not direct heat. As far as we can tell, Traeger grills operate like an oven.

For this reason, you can use it there without any doubts.

Who doesn't love a good home-cooked meal while spending time outside? Of course, we should always use cooking gear safely. Fortunately, it's perfectly safe to use glass or Pyrex dishes in smokers. Though, that's as long as you follow the safety guidelines.

Before you go, do you have other glass or Pyrex concerns? Are you wondering if it can go into a freezer? For more information, check out:

Can Pyrex Go In The Freezer?

Here are other topics you might want to check out.

Can Pyrex Go In The Oven?

Can Pyrex Be Used On The Stovetop? [Not A Simple Question!]

Can You Make Bread Without A Stand Mixer?

How To Store A Royal Iced Cake

How Big Is A Standard Springform Pan?