The scene is set. You have a movie starting on your tv and you're about to make a pot of fresh popcorn on your stove. You're about to start preparing it when you realize you don't have any more oil! Can you still make your popcorn without any oil? That question is what brought you here to this article and you don't have to look any further! We've done all the research for you and put it in one place.

Can you pop popcorn without oil? Yes, you can! There are multiple ways you can cook popcorn at home without using oil such as using water, using an air popper, or use an instant pot.

Keep reading to find out exactly how to make your popcorn at home using these methods along with other tips and tricks to popping your favorite snack. 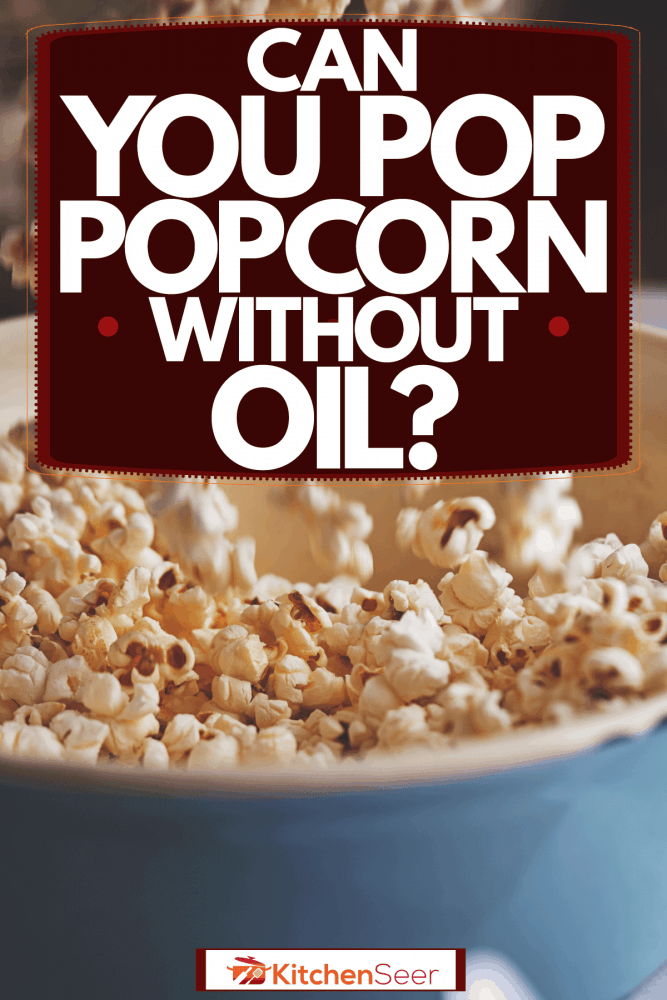 Three Ways To Pop Your Popcorn Without Oil

Making popcorn using this method requires just a couple of tablespoons of water instead of oil. You would heat the pan to the same temperature as with oil and shake it vigorously to ensure the kernels don't burn before they can pop.

If you don't have an air popper or don't want to spend money on one, we have another air popping solution for you. All you need is a nonstick pan! Just preheat a pot or pan that is nonstick, heating on medium heat for about 2-3 minutes. Keep a lid on it while it heats and make sure the lid is a tight fit. Then, you can add a few drops of water to see if the pan is hot enough for the kernels to be added. If the water sizzles immediately, then it's hot enough. Add in the popcorn kernels and close the lid back tightly. Reduce the heat to low immediately.

To keep the kernels cooking evenly, you must shake the pot or pan gently and listen to the popping sound. The kernels should begin popping after about a minute or so. You'll know when it's done cooking when there are more than 3 seconds in between popping. Don't cook it any longer than that or you'll risk burning your already cooked popcorn. Season and serve immediately.

Check out this air popper from Amazon.

If you own an instant pot, then you can try this method of popping your popcorn. Just set the Instant Pot to high pressure and put the kernels in with enough space for them to pop and expand. Cook for about four minutes, listening out for the popping sounds. When there are about three seconds or more between each pop, you know they are done cooking.

Keep reading below for popcorn popping tips and tricks as well as a brief overview of what makes popcorn, well, popcorn!

What Puts The Pop In Popcorn? 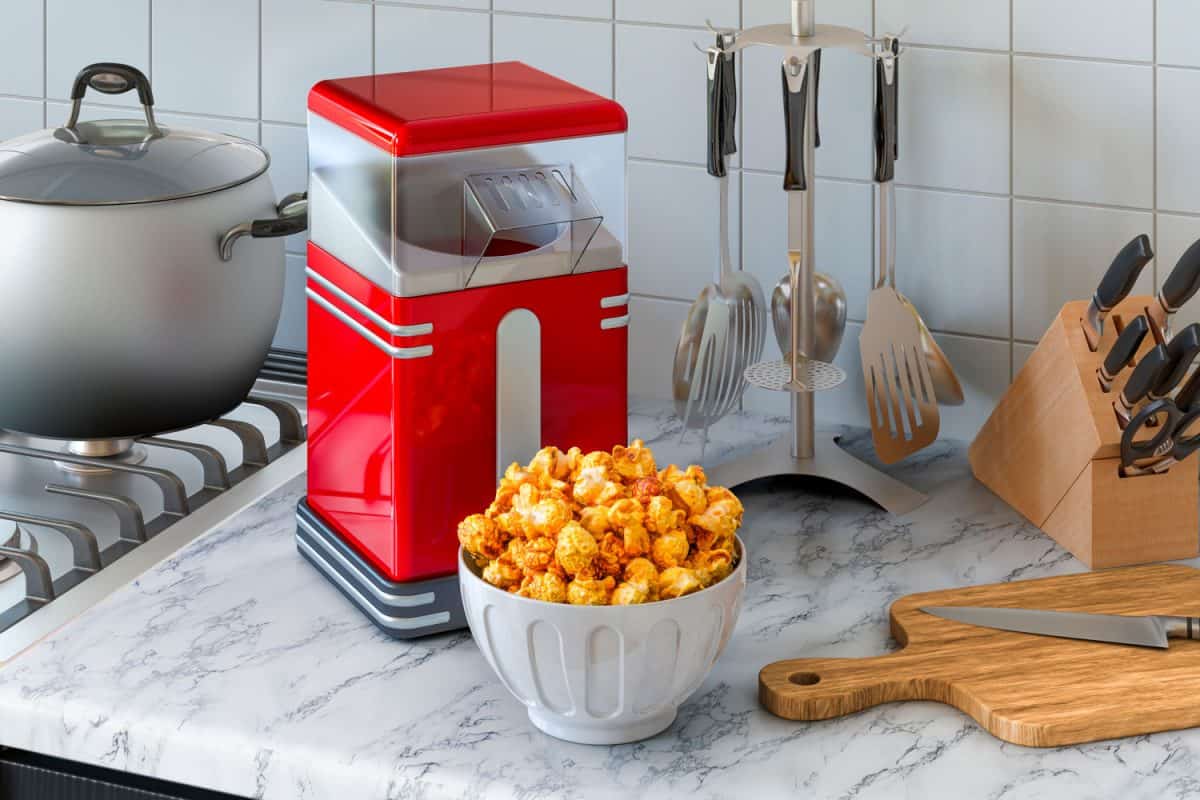 Popcorn has been a popular snack for thousands of years. Remnants of the tasty treat have been found in Mexico dating back to 3600 BC. Popcorn pops because each popcorn kernel is special.

Popcorn kernels contain oil and water with starch, surrounded by a hard and strong outer coating. When popcorn is heated, the water inside the kernel tries to expand into steam, but it cannot escape through the seed coat. When the popcorn reaches a temperature of 356F (180C) the pressure inside the kernel is sufficient enough to rupture the popcorn hull, essentially turning the kernel inside out.

The pressure inside the kernel is released rapidly, expanding the proteins and starches inside the popcorn kernel into a foam, which then cools and forms into the popcorn puff we all know and love. A popped piece of corn is about 20 to 50 times larger than the original kernel.

If popcorn is heated too slowly, the steam will slowly leak out of the kernel instead of popping. If heated too quickly, it will pop, but the center of the kernel will be too hard and not very tasty.

Popcorn is not the only grain that can pop! Sorghum, quinoa, millet, and amaranth grain all puff up when heated as the pressure from expanding steam breaks open the seed coat.

What Can You Substitute For Popcorn Oil?

Some people prefer to use butter instead of oil for popcorn. However, butter has a lower smoke point than oil does, meaning it's more likely to burn. Some different oils you can use other than canola oil include sunflower oil, coconut oil, and olive oil.

While oil is not strictly necessary to make a great bowl of popcorn, oil does help with the process. The oil heats uniformly in the pan and is a much better conductor of heat than air. It would allow the corn to pop marginally faster, but also cut down on burning from hot spots on the pan.

Also, depending on the oil you're using, you can use it to add an additional flavor element to the popcorn without having to resort to shake-on flavorings. Oils to use for flavor would include peanut or olive oil. Many would say that coconut oil is the best oil for making popcorn because of its lower chance of burning.

Can You Pop Popcorn In Boiling Water?

Popping popcorn in boiling water wouldn't be a very good idea. Popcorn pops because of steam inside the kernel. If the kernel is submerged in water, it doesn't have a chance to build up steam and pop. The end result would be something like boiling pasta or rice. The kernel would get soft and not pop at all.

How Do I Pop Popcorn In The Microwave Without Oil? 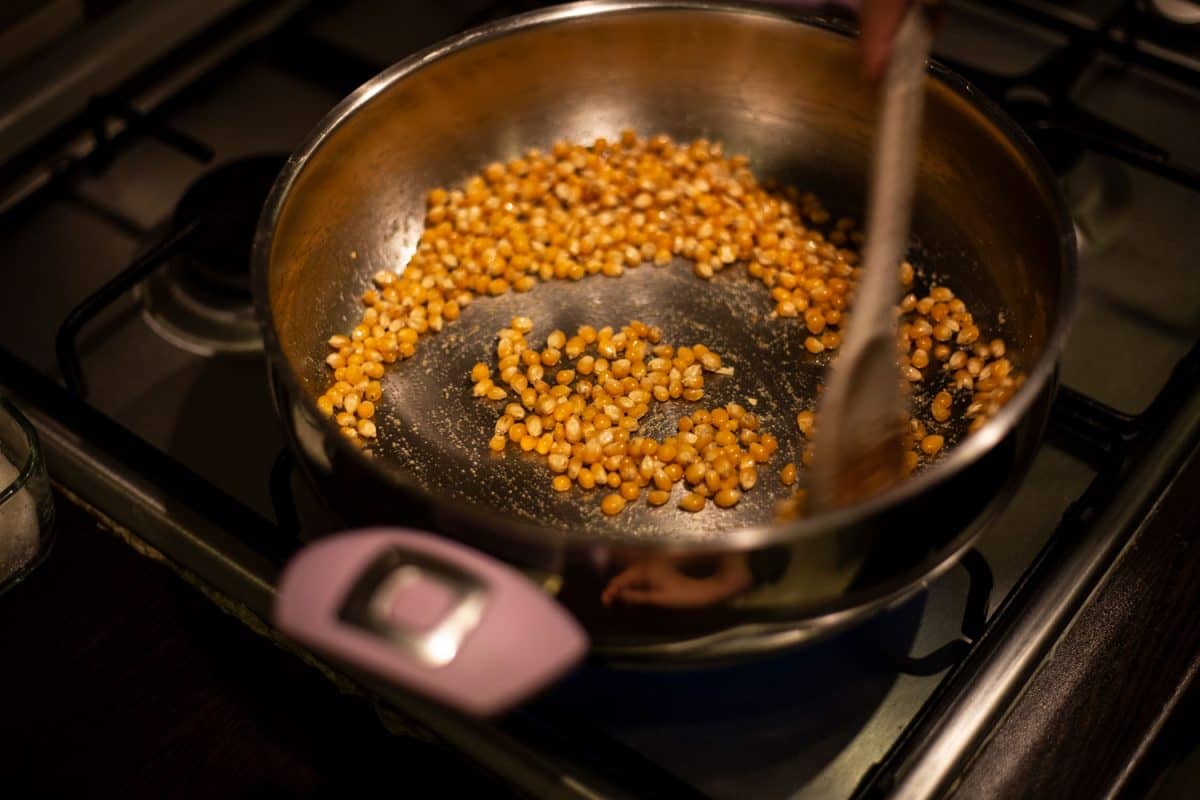 This method is very similar to air popping your popcorn on the stove as mentioned earlier. All you need is a microwavable container with a tight lid for it. Pour your kernels into the container to a point where there is still some room between the kernels for them to cook and expand. Cook the kernels for 3-5 minutes on high, listening for the sound of the popping. Once there are about 2 seconds between popping, it's time to take it out of the microwave.

Popcorn is a delicious snack that can be prepared in a variety of ways as listed above. We hope one of these varieties has aided you in your popcorn popping adventure! Please feel free to check out a few of our other articles about your favorite popping snack.

How Long Can You Keep Popped Popcorn?

Does Microwave Popcorn Expire? How Long Does It Last?

Pasta Dough Too Dry – What To Do?