Some of the most rewarding dishes to make in your kitchen are the ones that unfortunately take the most time. Usually, this requires the dish to spend hours in the oven, which is time-consuming. It also makes your kitchen even hotter, which in the middle of summer is never good! A great example of this is roasted tomatoes. What if there was a way to have cooked tomatoes in a fraction of the time? We have researched all about cooking tomatoes so that you can learn the best and fastest ways to cook them!

You absolutely can microwave tomatoes. There are a few different ways to cook them in a microwave that produce different results. When microwaving tomatoes, some precautions need to be taken to have the best results. They can be cooked to be part of another dish or to be a stand-alone treat.

Microwaves are convenient appliances to have in your kitchen. They make things go much more quickly than when cooking in a traditional oven or on the stove. There are, of course, a few downsides to microwave cooking, as it doesn't always produce the flavors or textures that you want your food to have. However, if you know what you're doing, then you can do some pretty amazing things with one. Make sure that you keep reading down below to learn in-depth exactly how to get the best result from using your microwave with tomatoes! 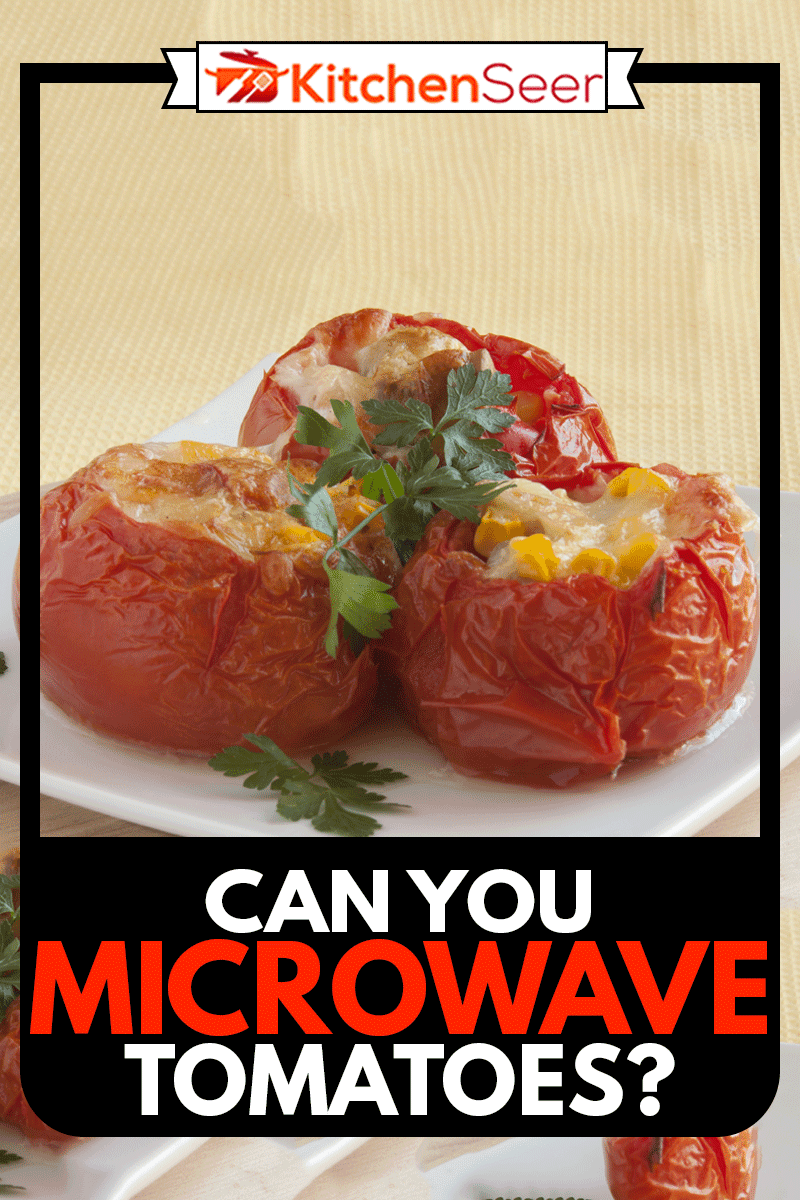 All About Microwaving Tomatoes

Tomatoes are one of those amazing ingredients that are delicious whether they're fresh or cooked. Setting aside the time to properly cook them to be added to a dish can often be inconvenient. Knowing that you can use the microwave for this job completely changes the game, however.  Preparing them quickly might be the deciding factor in adding them to a cooked dish or leaving them raw. 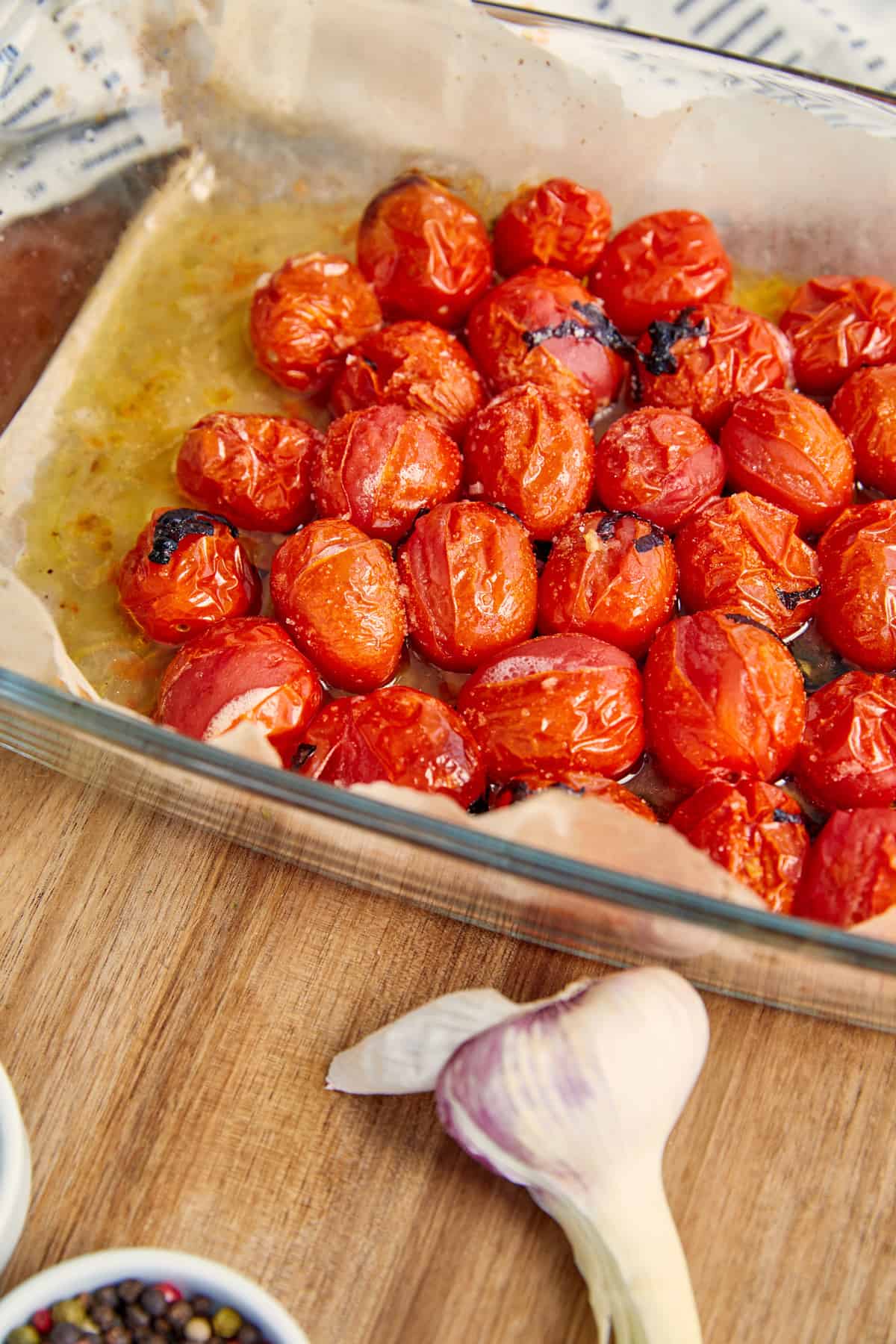 Why You Can Cook Tomatoes In The Microwave

You can technically cook anything in a microwave that you would put in the oven. There are ingredients that you shouldn't microwave because they can have unsatisfactory results. Usually, that happens because things cooked in microwaves tend to be soggy. Luckily, tomatoes have so much moisture in them they're going to be kind of soggy no matter how you cook them.

Microwaving them is also much faster than traditional methods because the heat goes through the tomato faster. You have to take some precautions so that cooking them in the microwave doesn't end poorly.

How To Cook Tomatoes In The Microwave 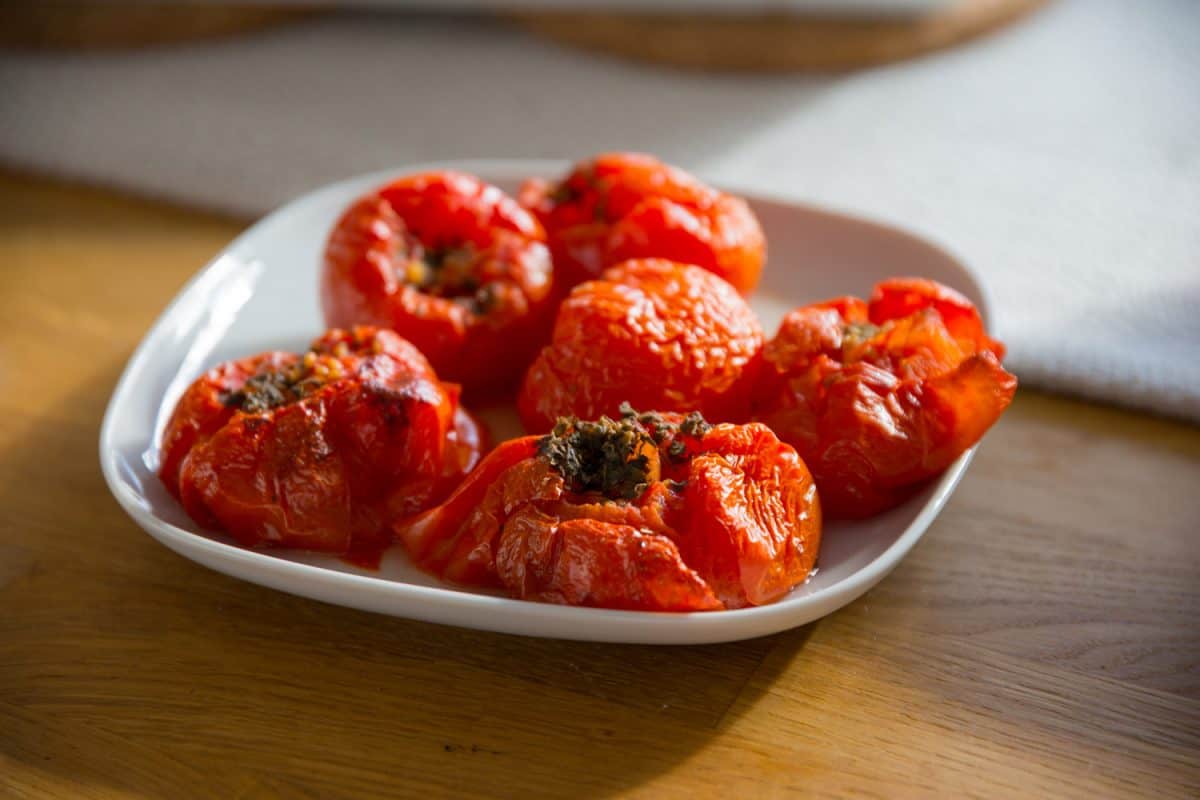 There are a couple of different ways to prepare tomatoes in the microwave. The first method is to leave the tomatoes whole while cooking them. Cooking tomatoes this way will give you an end product that is similar to steaming them.

To do this, you want to put your medium to large-sized tomatoes on or in a microwave-safe dish. Next, make sure to put cuts on top of each tomato in the form of an "X" or something similar. Finally, cook them in the microwave for 2 - 3 minutes or until they are done to your satisfaction.

The other most used way to microwave tomatoes is to cut them up first. You can cut them into slices or chunks or even dice them. The smaller you cut them, the faster they'll cook, so keep that in mind when making this decision.

Lastly, season them and put them in the microwave for 2 minutes at a time until they are done to your liking. This is a great way to get tomatoes ready to be made into a sauce!

What You Need To Do Before Microwaving Tomatoes

There is only one thing that needs to be done before placing your tomatoes in the microwave. You have to make sure to cut them in some way. Either cut them up entirely or cut slits in them or even poke holes if you would like.

Just make sure that the tomato is punctured in some way for ventilation. If you don't do this, the tomato will explode in the microwave after a certain point of cooking.

They Can Be Microwaved Alone Or As Part Of A Dish

Microwaving tomatoes is a very convenient way to quickly prepare them to be added to a meal. However, that doesn't mean you can't prepare them in a microwave to be a delicious dish all on their own. You can do this by using the methods above but making sure the season the tomatoes first.

Cooking them in a sauce of some kind is also a great way to infuse them with flavor. You can also microwave them at the same time mixed up with other veggies or ingredients for a great side. 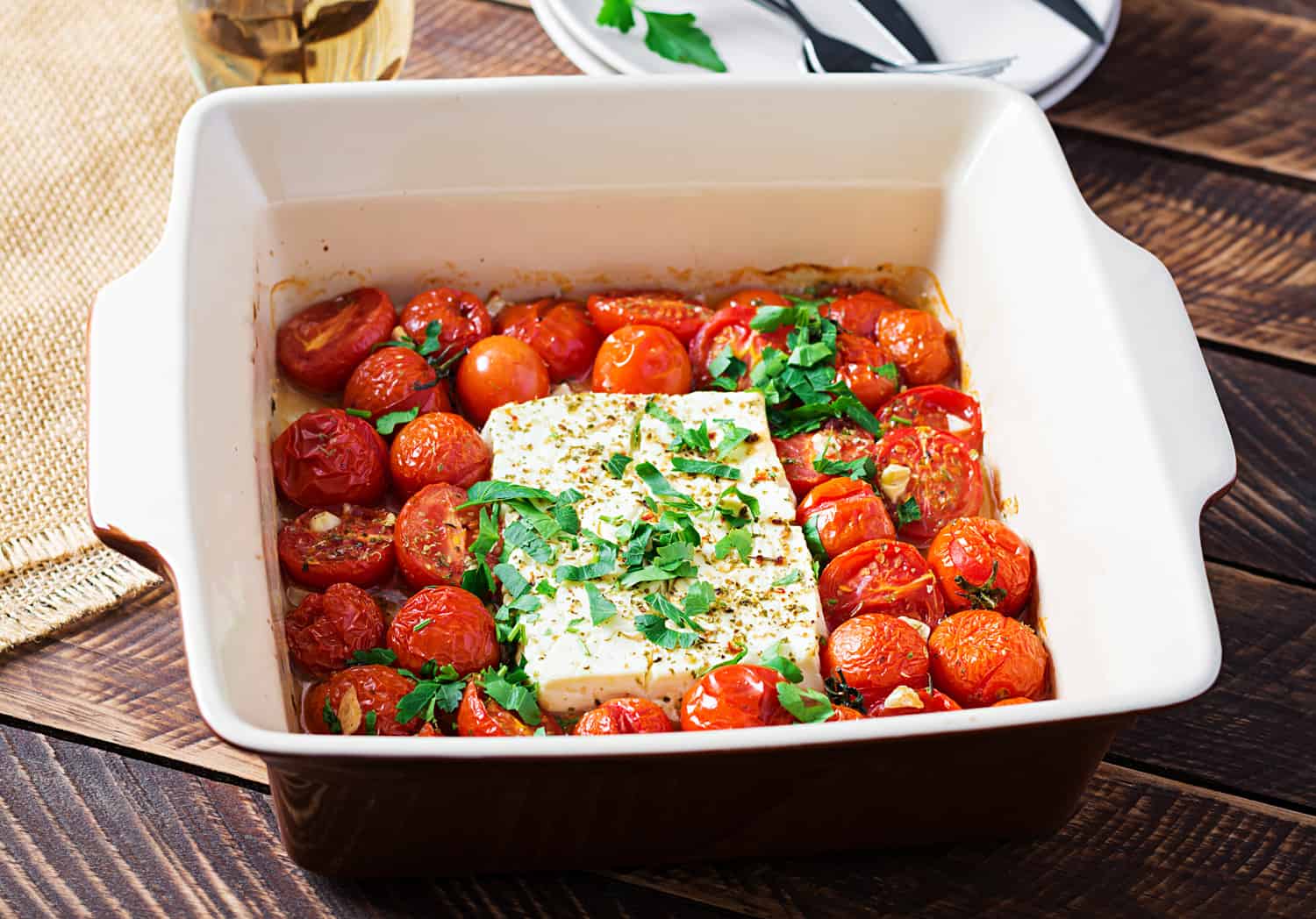 Aside from knowing that you can and how to microwave tomatoes, you have some other questions about the process.

Is It Safe To Microwave Tomatoes?

It is just as safe to microwave tomatoes as it is to microwave any other ingredient or food. Nothing is going to happen to the tomato in the microwave while it cooks that will make it dangerous or inedible. Cooking a tomato this way is also perfectly safe for the microwave. It will not become damaged as long as the tomato is prepared properly before being microwaved. Even then, it's not likely that your microwave will break or anything.

What Happens If You Microwave Tomatoes?

The short answer is that they get cooked! Tomatoes have so much water that microwaves them will kind of boil them from the inside out. This is great for cooking them quickly!

Do Tomatoes Explode In The Microwave?

Tomatoes will definitely explode in the microwave. That's why it is so important to cut, puncture, or slice them before microwaving them. Tomatoes and other vegetables and fruits like them have such a high water content that they cook quickly inside microwaves.

This process builds up pressure. If the pressure has nowhere to go, it makes a place to go by exploding the tomatoes. This is also why it's essential to cook them in small increments. Leaving them unattended cooking in the microwave for a long time will cause a huge mess.

Can You Soften A Tomato In The Microwave?

Cooking your tomato for a small amount of time in the microwave will soften it. You can leave it whole or cut it up depending on your needs for the tomato. Just make sure that they're punctured in some way and cook them in 30-second increments.

Is It Healthy To Microwave Tomatoes?

It has been shown that it is healthy to microwave tomatoes. Many believe that microwaves rob ingredients of their nutritional value, but this is not the case, at least with tomatoes. This study on the effects of microwaving tomatoes showed that the microwave makes a tomato more nutritious.

The more tomatoes are cooked in microwaves, the more nutrients they release from their structure as a result. So when you bite into them, they are perfectly healthy!

How To Grill Tomatoes In The Microwave 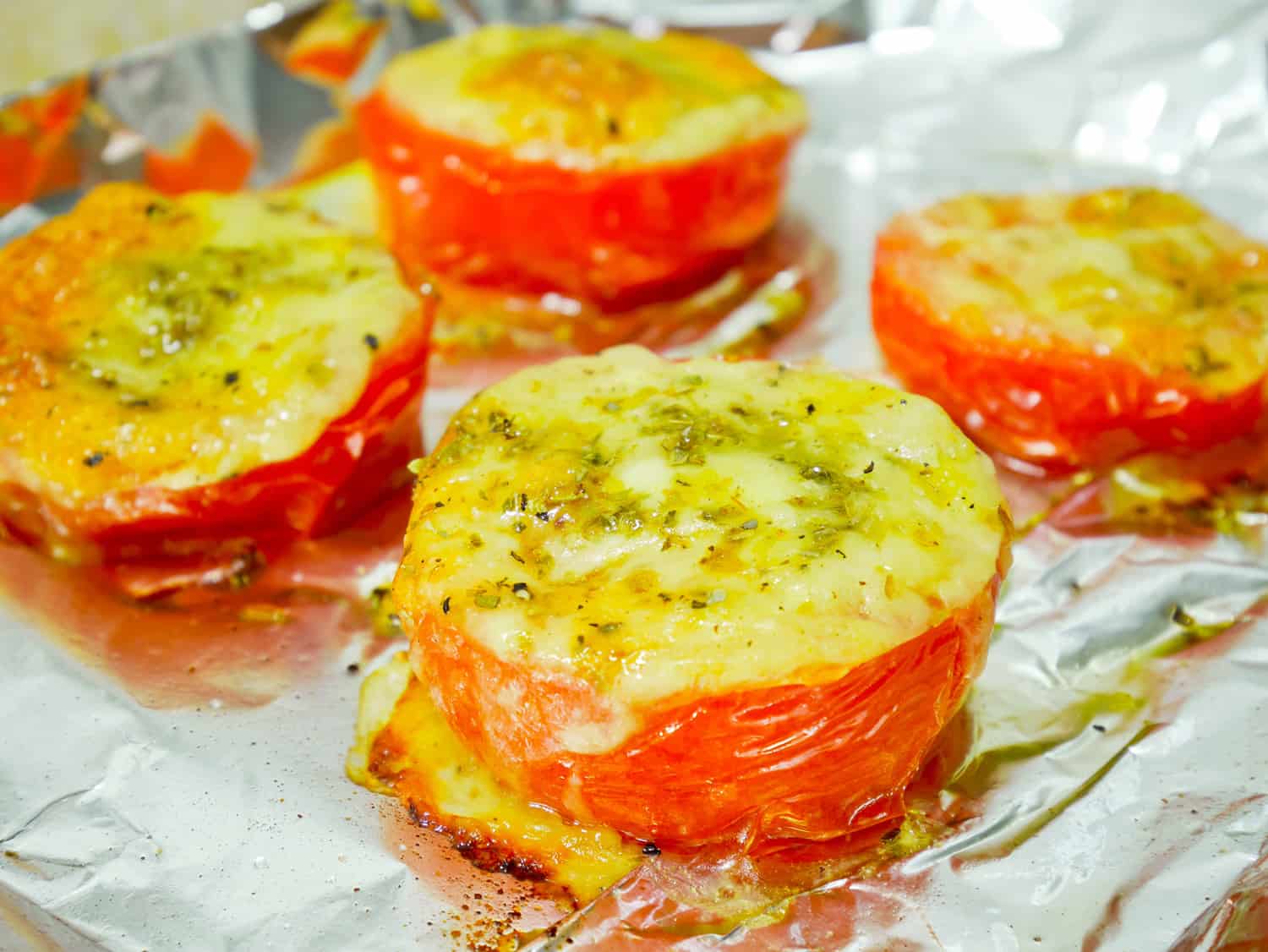 You can't get the same results in a microwave that you can on a grill. However, you can produce a similar product by roasting the tomatoes in the microwave. To do this, you'll want to slice up your tomatoes and put them together in a microwave-safe dish. Then cover them with some olive oil and seasonings.

Most recipes say to microwave them like this for quite a long time, up to 10-minutes, but you need to check them after every minute or so. Give this microwave-roasted tomato recipe a try! 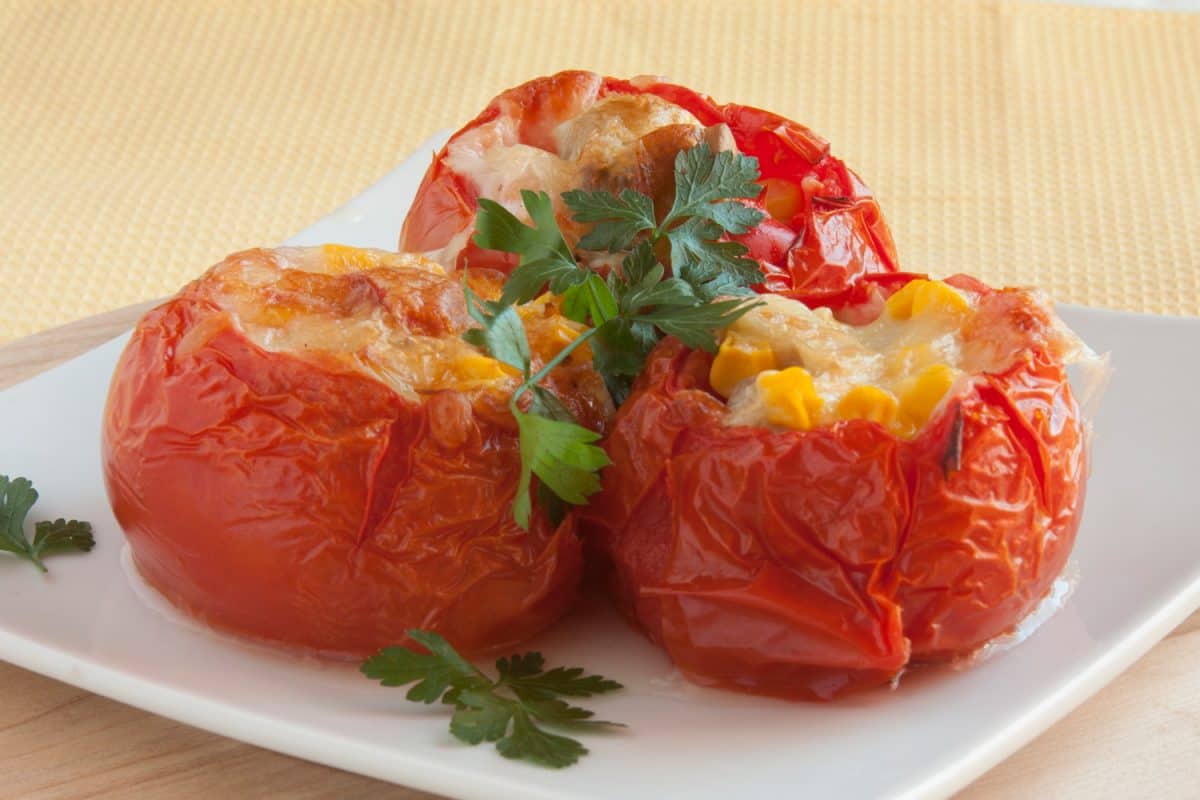 In the end, microwaving tomatoes is a great way to cook them deliciously and quickly. There are a couple of different ways to prepare them to give different results depending on what you want the cooked tomatoes for.

Regardless of how you decide to make them, you have to make sure that you cut up or puncture the tomato, or else they will explode in the microwave. Now you can put this new tomato cooking knowledge to the test and try out some delicious new recipes!

For some more ideas on how to use your microwave to its fullest, make sure you click on the links below!

Can You Microwave Cinnamon Rolls?

Does A Microwave Cook From The Inside Out?

Can You Microwave Hot Dogs? [And How To!]

Do Peppers Or Onions Cook Faster?

How Long Does Cheese Last In The Fridge?