Smoked brisket, sliced and served with some coleslaw and corn, is a pleasure like few others. But what if you wanted to make burgers with brisket? Can you grind up some tasty patties, or is it an affront to the deities of meat? We've researched this tasty topic to bring you the answers you need.

Ground brisket is excellent for making hamburgers! You can mix ground brisket with other cuts of beef or you can also make hamburgers from just ground brisket. Pure brisket burgers will turn out better when cooked longer on a lower heat than standard burgers.

In this article, we'll break down how to grind up brisket step-by-step. We'll even see alternatives if you don't have a meat grinder handy. We'll also take a look at some tasty ways to cook up your brisket burgers. Read on to learn all about it! 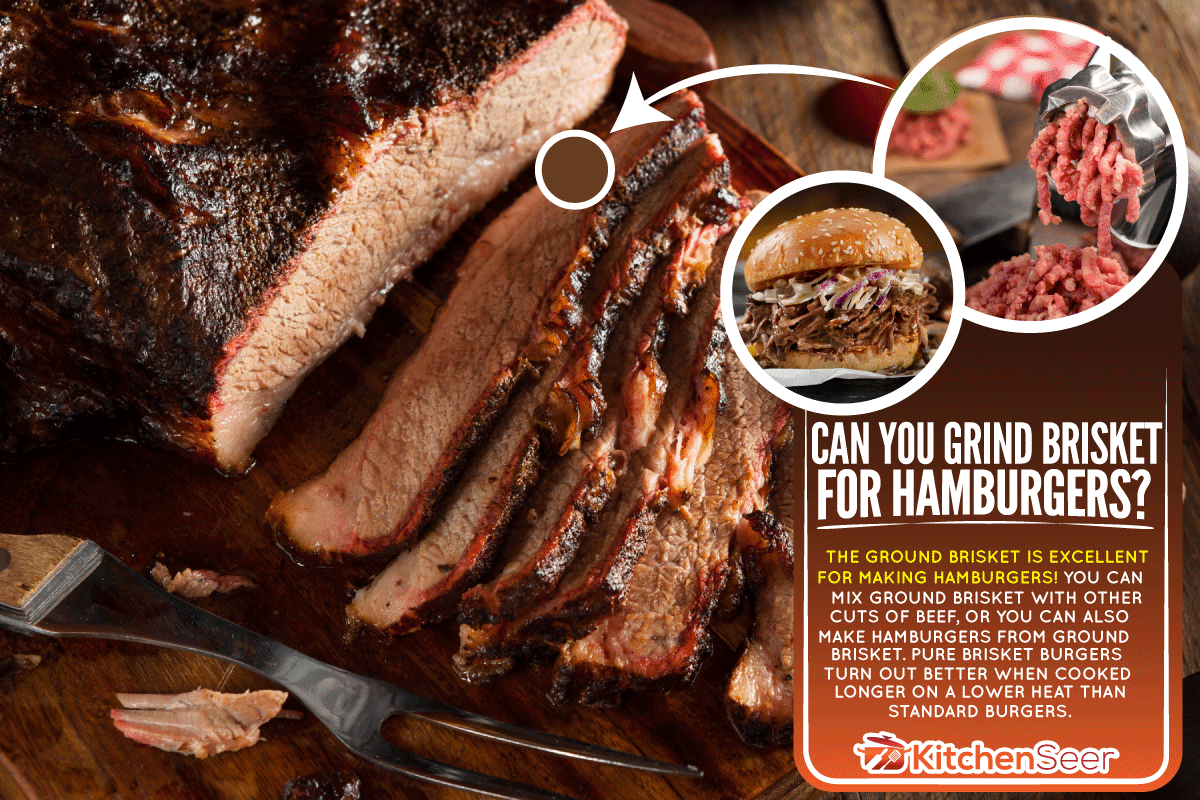 How to Grind Brisket for Hamburgers

The first step to making burgers with brisket is grinding up the meat. Doing this yourself gives you more control over the process and the end product. 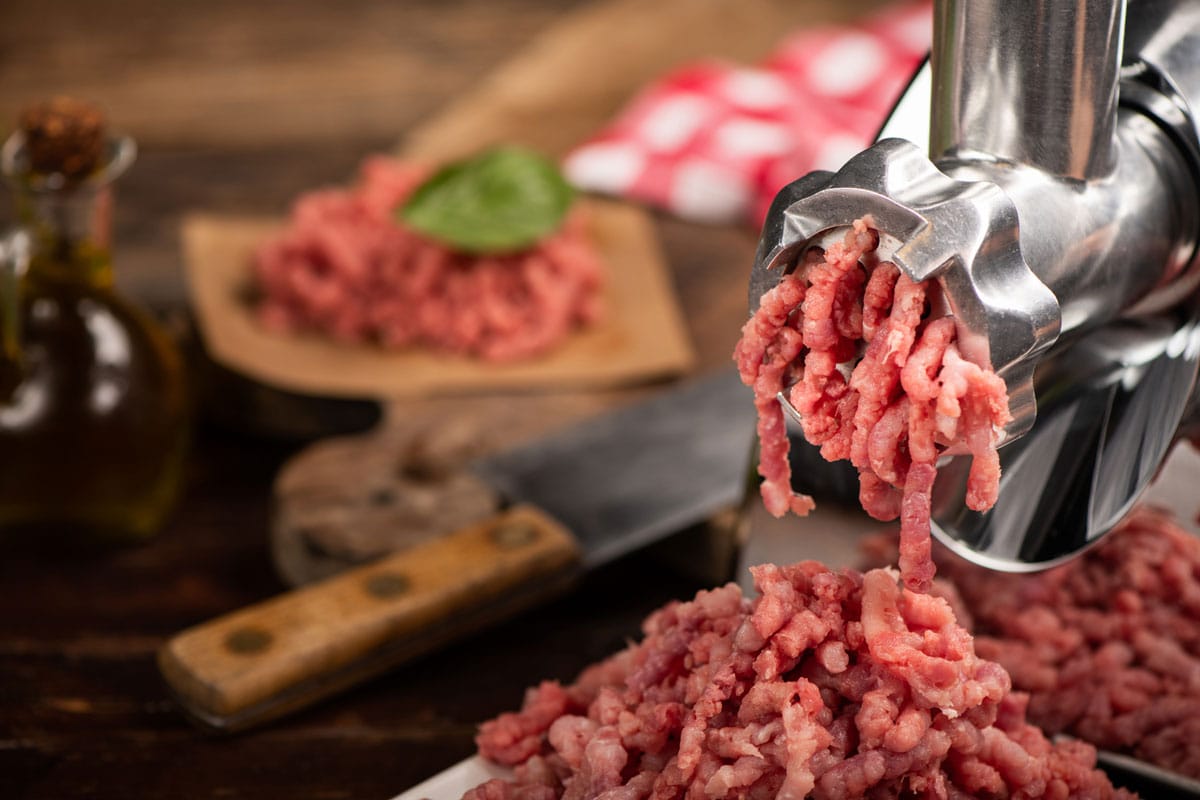 If you want to grind your own brisket, you'll first want to prepare your meat and tools. You'll need:

Once you have everything ready to go, simply follow these steps:

The video below illustrates this process well. They use sirloin and chuck for their burgers, but the process is the same:

Now you'll have ground brisket ready to go for your burgers!

Can You Grind Brisket With a Food Processor?

Meat grinders are specialized pieces of equipment, and not everyone has one at home. It's more common to find food processors in American kitchens, and fortunately, you can use one to grind brisket too!

To grind your brisket or other burger meat in a food processor, follow the same process outlined above. Instead of using the meat grinder, though, you will add small batches of the chilled, cubed meat to the food processor and press the pulse button until reaching the desired consistency. This typically takes 8 to 10 1-second pulses.

After grinding the meat this way, you may want to go through and check for any large chunks. Those you can throw back in the food processor until they reach the right grind.

Make sure you work in small batches when grinding brisket this way. This takes more time, it but will result in a much more consistent and pleasing texture.

This is the method that Alton Brown uses to make his so-called "Burger of the Gods." There is one difference between his method and ours: he grinds his cuts separately and then mixes them together. We recommend mixing your cuts as you add them to the grinder, as this makes it easier to avoid overworking the meat when combining them.

Check out his process in the video below from his classic Food Network show, Good Eats:

Will Your Butcher Grind Brisket For you?

So far we've looked at two different methods for grinding brisket. However, there's another option: get your brisket ground by the butcher.

You may occasionally find ground brisket for sale at a butcher shop, but it's not common in most areas. However, most butchers will be willing to grind some for you if you ask. If your butcher won't grind it for you, you may want to go to a different butcher. 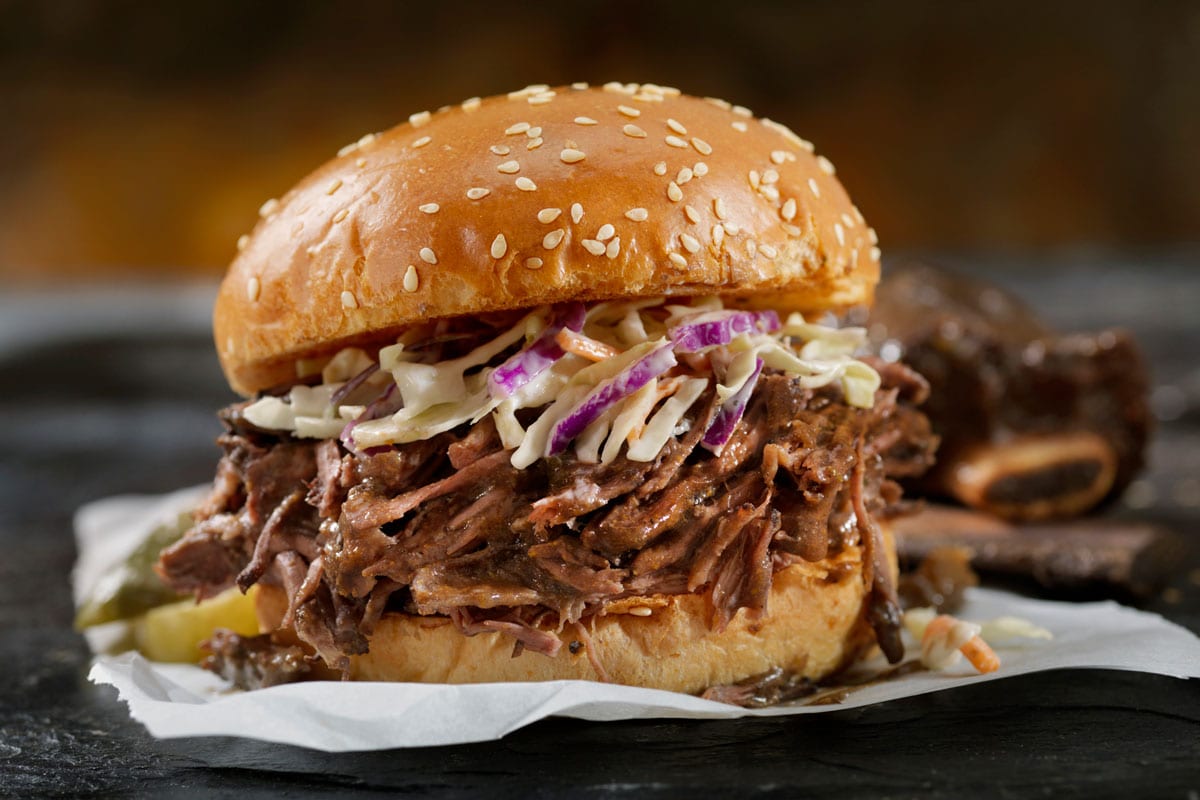 Your typical hamburger is made with two or three cuts of beef. These usually include lean cuts, such as sirloin, and fattier cuts, like chuck. The ground beef you buy at the store is often made with whatever extra beef the butcher had that couldn't be used.

There are many great hamburger recipes that use brisket in conjunction with other cuts, but pure brisket burgers are relatively rare. They are also a different experience in many ways than your standard hamburger.

One important thing to keep in mind is that brisket is tougher than many other cuts of beef. This is why brisket is often cooked low and slow, such as with a smoker or crockpot.

Because brisket burgers use ground brisket, some of the connective tissue is mechanically broken down. However, it will still take longer to cook than traditional burgers and will benefit from cooking at a lower temperature.

How to Cook Brisket Burgers 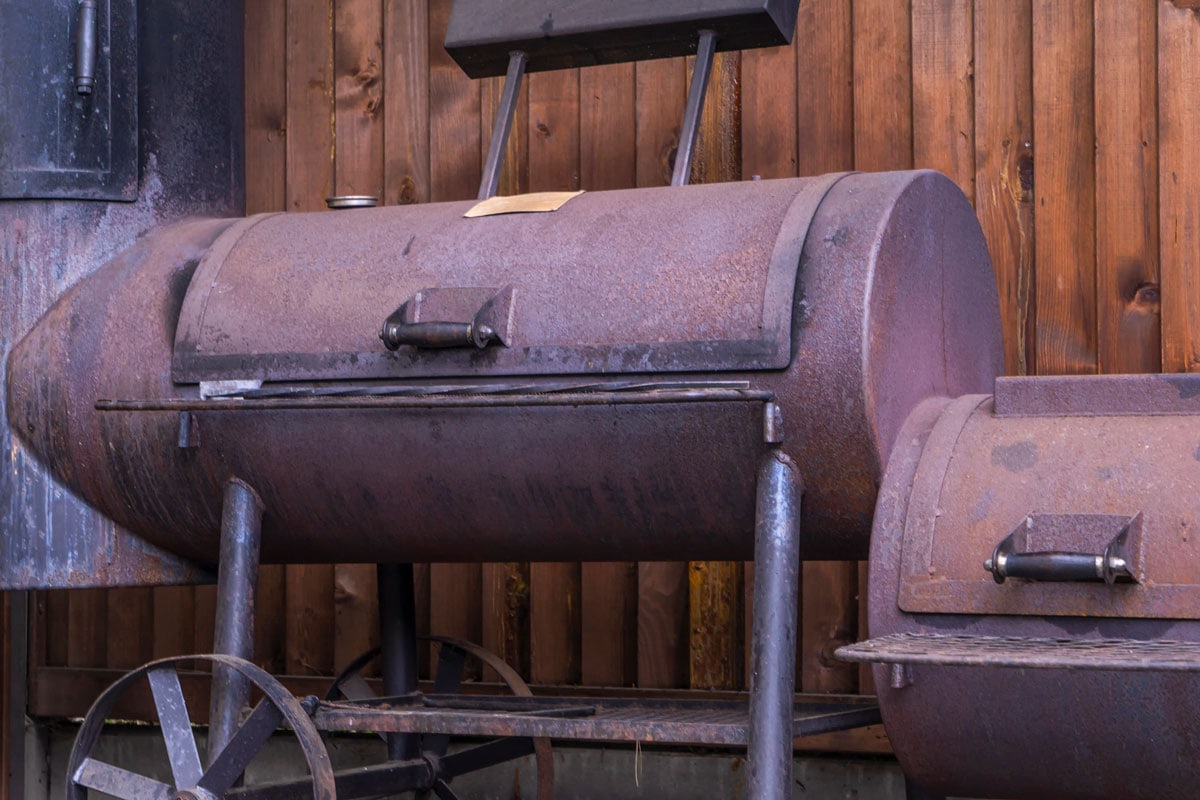 There are several great ways you can cook your brisket burgers. The key is cooking down the connective tissue without drying out the meat. While this can be tricky, it can be accomplished with several different methods.

Grilling is one of the best ways to cook up burgers, whether they're traditional burgers or brisket burgers. With traditional burgers, you generally cook them over direct heat so they can get a nice sear on the outside while staying rarer in the middle.

With brisket burgers, though, you'll want to cook them over indirect heat. This lets them cook more slowly so they can render and become tender.

While some people like their burgers medium-rare, with brisket burgers you'll want to cook them to 165º Fahrenheit. This would dry out a traditional burger, but is important for softening the connective tissue in the brisket. The rendered fat and tissue will keep brisket burgers juicy and tender even at this temperature.

You can also prepare your grill with hickory or oak for a nice, smokey flavor. That's the approach taken in this recipe for brisket burgers from Out Grilling.

Smoking is a popular way to prepare brisket, so why not smoke your brisket burgers too?

Smoke them with hickory or the wood of your choice at 225º Fahrenheit for 30 to 45 minutes, or until they reach an internal temperature of 130º Fahrenheit.

After smoking your burgers, you can sear them at high heat to get a nice crust on the outside. You can do this on the grill, on the stovetop, or in your smoker with a fresh chimney of hot coals, like in the method below from All Things BBQ:

While the methods we've looked at so far rely on a relatively low and slow cooking technique, it is possible to do hot and fast brisket burgers too. The secret is getting them thin, and that's best done with a proper griddle smash burger.

For this style of burger, you'll roll the ground brisket into balls instead of forming patties. Then, get your griddle nice and hot. Oil up your griddle with clarified butter or beef tallow, then place the ball on the griddle and smash it down. Some people use special weights to smash their burgers, but you can also just use a couple of spatulas to get the job done.

Once the burger is seared and has a nice crust, you flip it and add cheese if you want. These burgers end up thin and crispy, making them great for stacking.

This thinness has another advantage too. Even tougher cuts like brisket can be cooked hot and fast when pressed thin like this. In fact, ground brisket is the meat of choice for many when it comes to making Oklahoma onion burgers, a style of smash burger with a generous portion of thinly sliced onions placed on top before smashing. Once the burger is flipped, the onions caramelize beautifully.

You can see the technique for griddling an Oklahoma onion burger in the video below from Sam the Cooking Guy. He uses a pure brisket for his burgers, and you can see his method for grinding the brisket earlier in the video too. 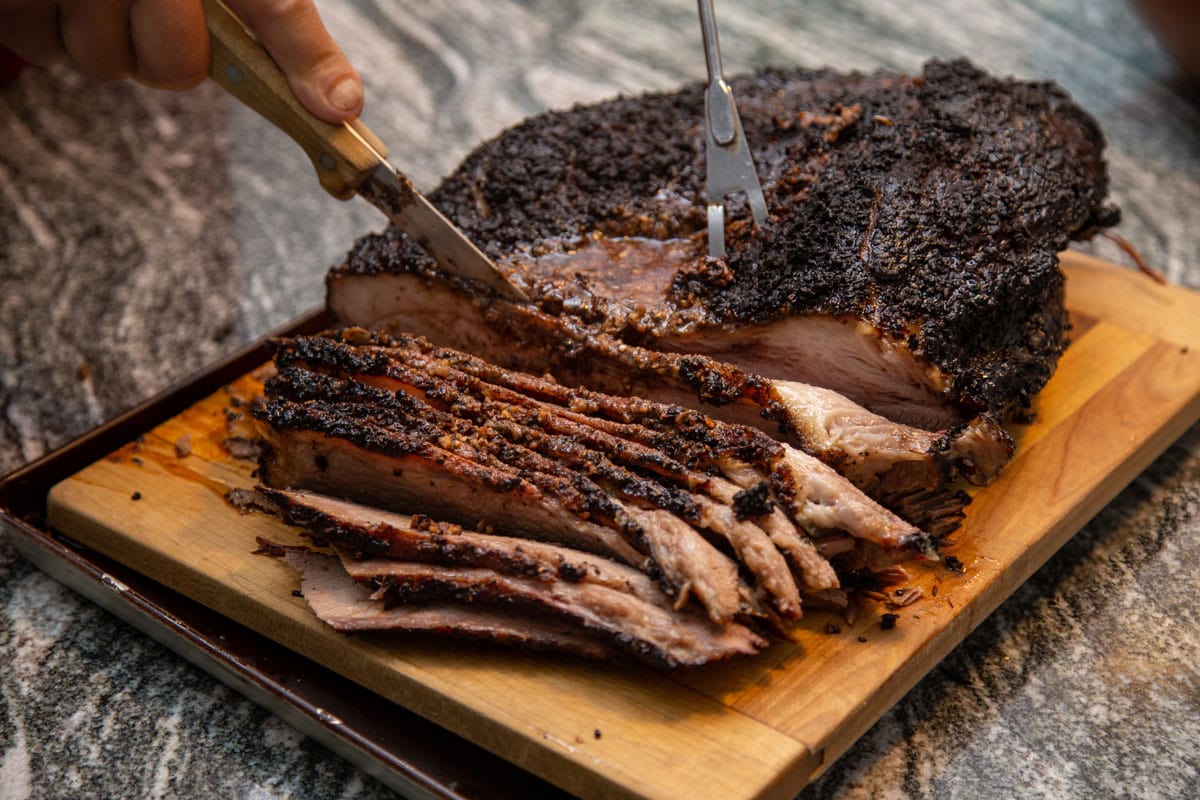 We've seen a lot about brisket, but you might still be wondering what exactly brisket is.

Brisket is a primal cut that comes from the lower chest of the cattle. And this muscle does a lot of work, holding the animal up and helping it walk. Because of this, it is a strong muscle. Because of that, it contains a lot of connective tissue.

This is why cuts from the front or the back of animals tend to be tougher. This also applies to chuck and round for beef. Muscles in the middle of the animal don't have to work as hard. Because of that, they are usually the more tender (and expensive) cuts, such as loin and ribeye. 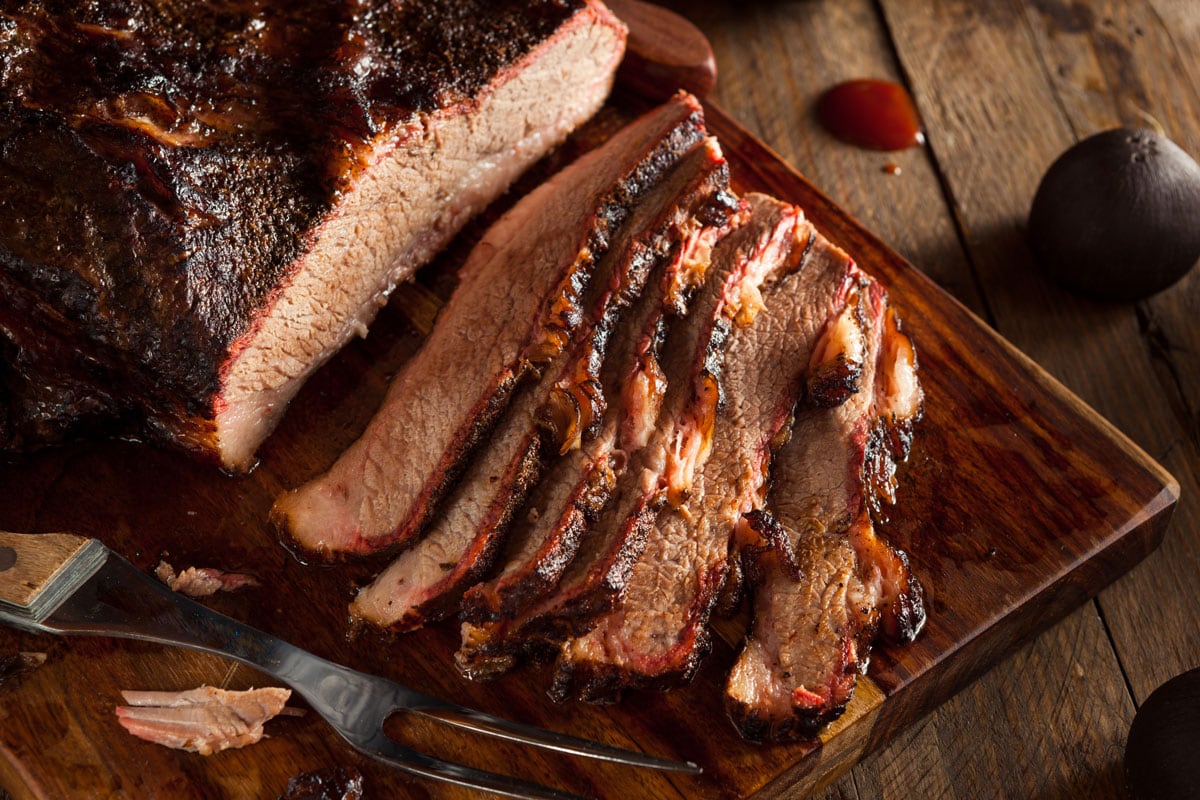 When most people think of brisket, they don't immediately picture burgers. However, it's not only possible to grind up brisket for burgers; it's delicious.

You can grind up brisket alongside some other cuts of meat or go for a pure brisket burger like in some of the recipes we've seen. Whichever path you choose, by following our advice you'll be well on your way to a carnivorous nirvana.

If you enjoyed this post, be sure to check out these great articles:

Types of Hamburger [Everything You Need to Know]

Should You Weigh Eggs When Baking?

How Long To Cook Salmon In Pan On Stove?