Are you looking for a new kick of flavor in your recipes? Maybe the store is all out of organic spinach? Well we’ve done a thorough internet search and we have the answer here to whether you can cook arugula like spinach!

You can use arugula in any recipe that calls for spinach, but it can vary the recipe flavor depending on its variety and maturity. For the best results, replace spinach with the same amount of young, fresh arugula. If using mature arugula, chop it finely to use in mixed salads, or chop, steam, and drain it to remove the extra bitterness before adding it to cooked recipes.

So is arugula going to change the flavor of your recipe? What does it taste like? We have the answers to these questions and more, so keep reading to learn more about cooking with arugula instead of spinach. 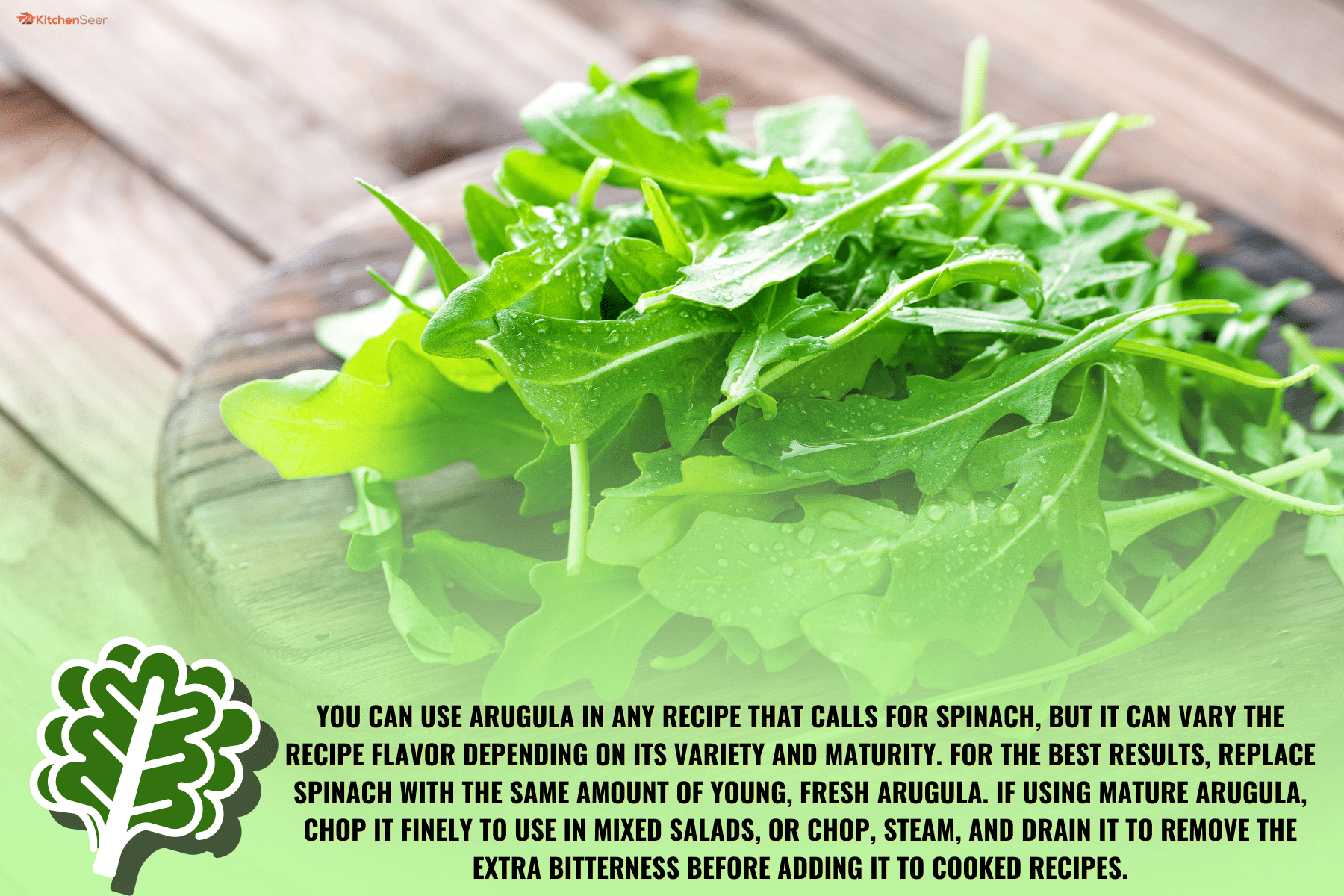 Cooking With Arugula Instead Of Spinach 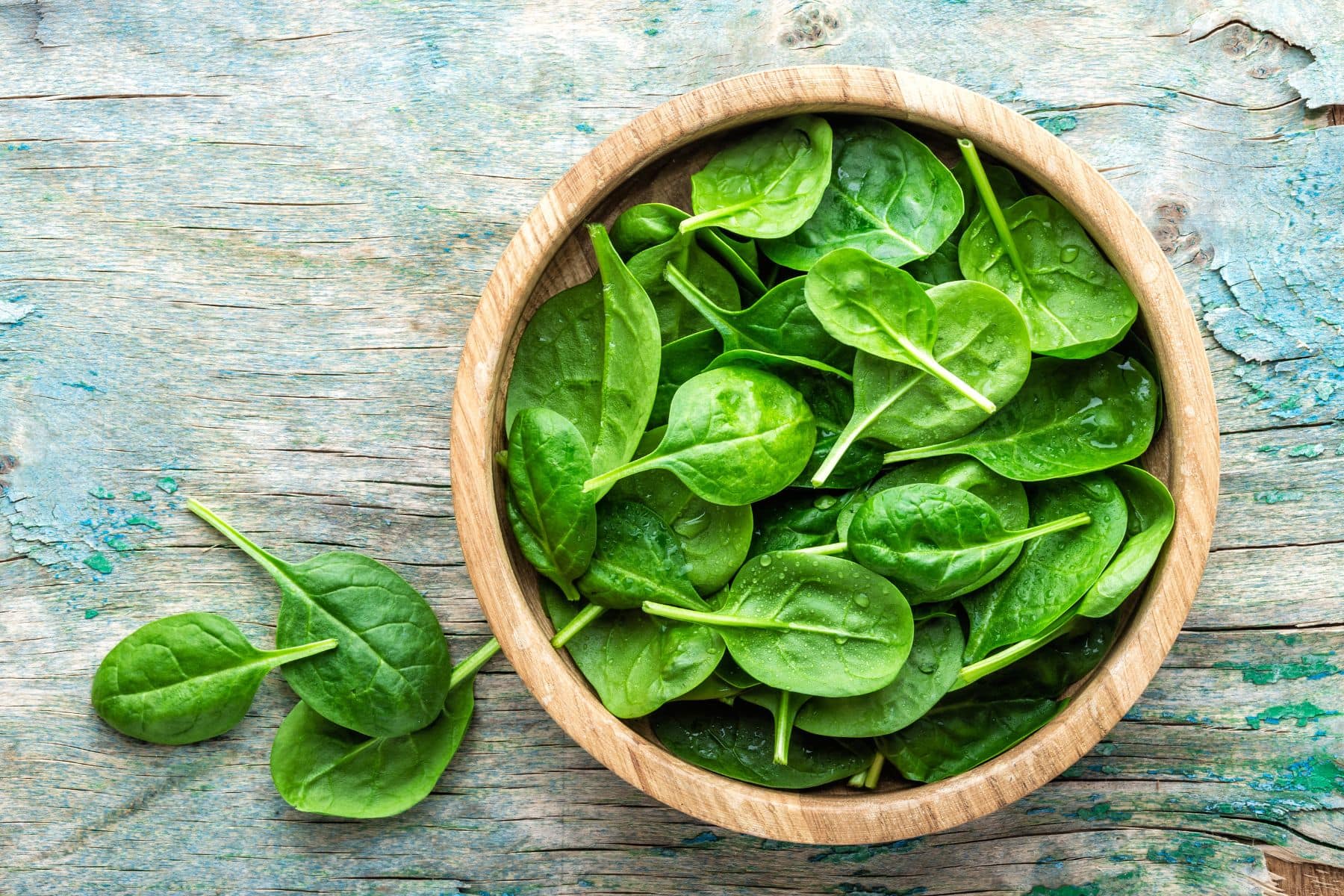 If you want to branch out and cook with arugula instead of spinach, or maybe you just need a quick substitute, it’s important to understand the differences.

Arugula is very similar to spinach in texture, being succulent and tender, which is what makes it ideal as a substitute for spinach. The young leaves, sometimes called baby arugula, are the most tender to use as a replacement.

Some arugula is harvested later, so the leaves can be less succulent and slightly stringy. If you end up with more mature leaves, simply chop them roughly to make them easier to chew in salads and cooked recipes.

Arugula has a stronger flavor profile than spinach. Both are part of the brassica family, like cauliflower, but arugula is in a different subdivision with other bitter greens like mustard. So it’s got a nice peppery or bitter kick that can wake up egg dishes like frittatas, omelets, and quiches.

The taste of arugula is generally why people are concerned about using arugula in a recipe that calls for spinach. 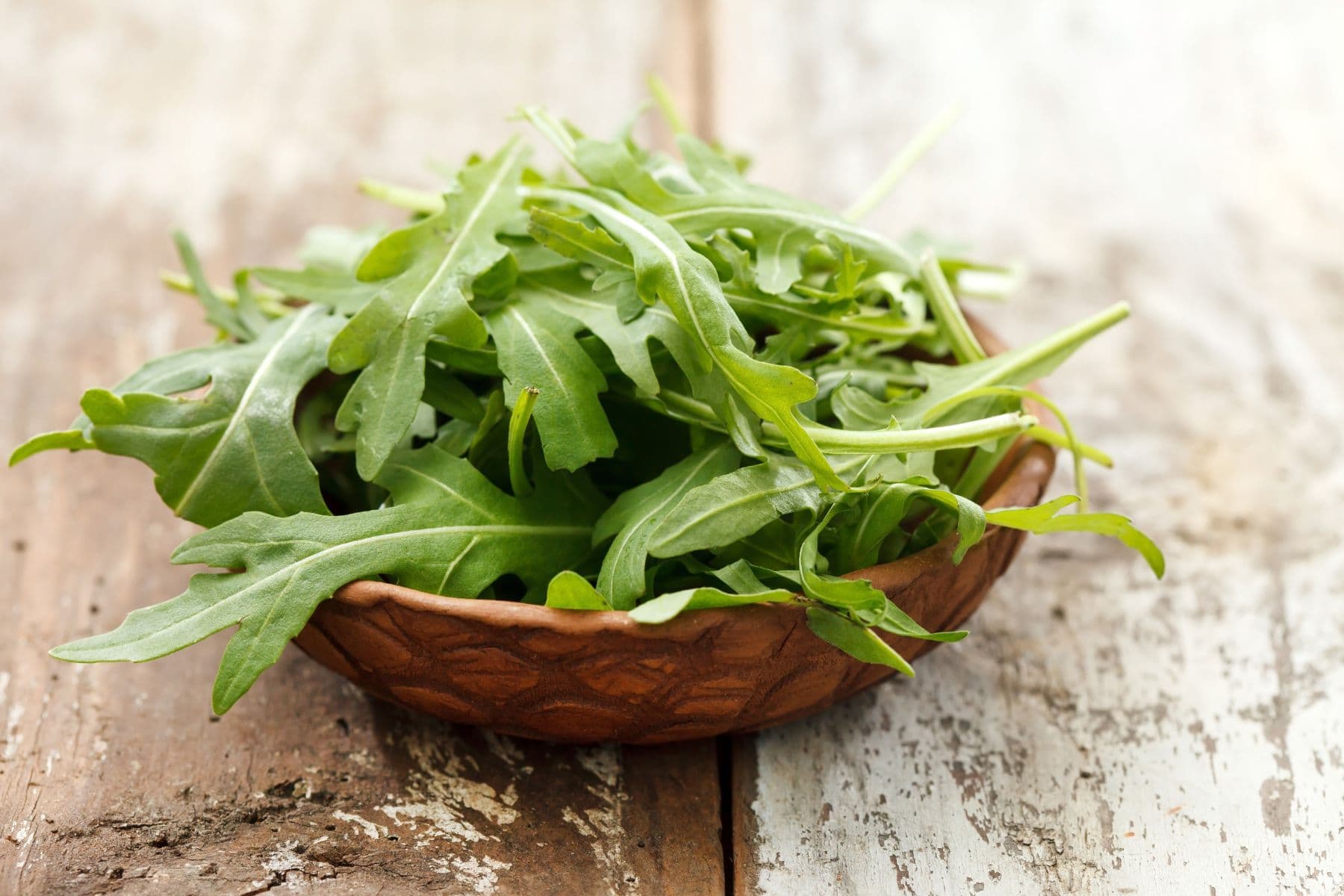 How To Use Arugula Instead Of Spinach

If you are concerned about the stronger flavor of arugula affecting your recipe, the most important rule is to use the youngest and freshest leaves you can find. Arugula becomes stronger tasting with age, so if you are faced with using older leaves in a cooked recipe, use the following trick.

Chop the leaves finely, steam them for 5-7 minutes, and drain the water. This will reduce the bitterness and soften the leaves. It’s best not to use mature arugula in a salad unless it’s chopped fine and mixed with other greens. Many people will find the taste quite strong used alone!

Can I Use Arugula In ANY Recipe Instead Of Spinach?

Arugula is almost universally considered to be an ideal replacement for spinach in any recipe. But if you’re trying to use it to replace the healthy handful of spinach in your favorite fruit smoothie, the flavor could be too strong. However, there is a possibility that you won’t even notice the flavor difference! 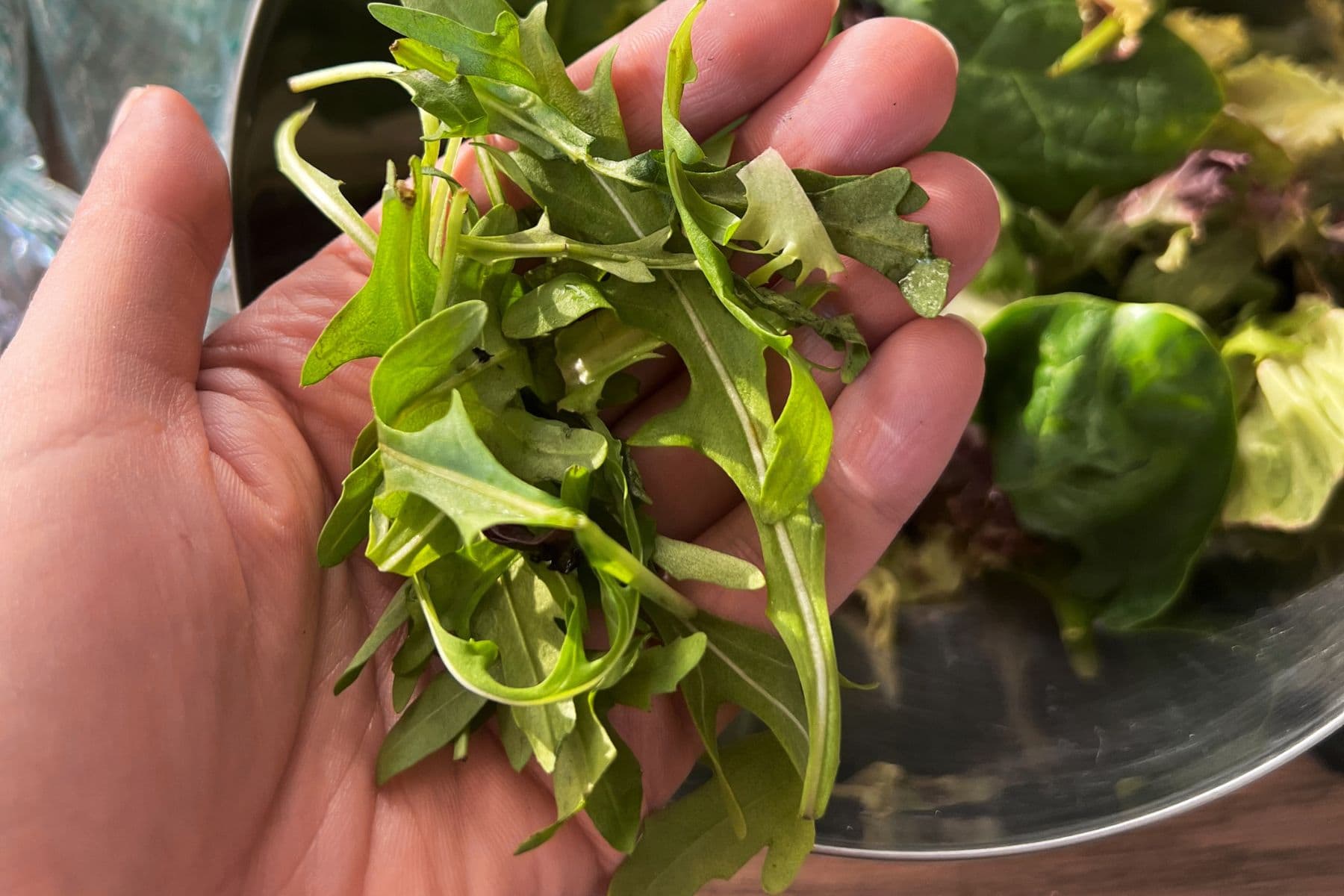 In the above photo are two popular brands of arugula. On the left, you see what was labeled ‘Arugula’ and on the right, “Wild Rocket.” They look quite different but have similar flavors. However, independent taste testers found the ‘Wild Rocket’ was actually less spicy.

What About The Flavor of Arugula?

Although many people will tell you arugula tastes bitter or peppery or spicy, there are others who describe it as mild, somewhat sweet, or simply grassy and lettuce-like. So why does everyone say something different? There are a few reasons:

The season and the temperature can have an effect on how bitter or mild arugula tastes. Even the age of the leaves affects the flavor, with older leaves tasting more bitter. On top of that, there are many different varieties of arugula on the market, and each one can have a different flavor profile.

But there is an even funnier reason why people say so many different things about the flavor.

Taste is based on odor receptors in the nose and taste buds on the tongue. We know that no single person has the same taste receptors, so people will all have different likes and dislikes about food. Now add to this that arugula is full of compounds called isothiocyanates, specifically, one called glucosinolate.

You can taste glucosinolate if you have the TAS2R38 gene. And depending on whether you have a copy from one or both parents and whether the gene is working, you might really be able to taste it, only taste it mildly, or barely taste it at all!

So, don’t be confused when you don’t taste the arugula in your banana smoothie but then your partner has a sip and says, "YIKES!"

Try growing several varieties of arugula and testing the flavors with friends and family for fun!

Does Arugula Have The Same Health Benefits As Spinach?

Anyone who has ever watched Popeye the Sailor remembers that he gets his incredible strength from eating cans of spinach. But does arugula have the same benefits? Well, not exactly.

Remember the isothiocyanates that we talked about in the paragraph above? Not only do they give arugula its distinctive flavor, but they’re also extremely effective at suppressing inflammation. Along with the B vitamins and other trace vitamins it possesses, arugula makes an excellent addition to any anti-inflammatory diet.

For people with kidney stone issues that have been warned not to eat spinach, arugula is an excellent option. The calcium in spinach combined with the high amount of oxalates makes spinach a no-no for these and other groups. Additionally, oxalates prevent the absorption of calcium.

Since arugula has low oxalates and high calcium, it’s excellent for bone health and easy to absorb. And it’s a better option for those with kidney or other health issues that have been told to keep high-oxalate foods to a minimum.

What Are The Best Recipes For Arugula?

Because of its strong peppery and bitter flavor, arugula tastes best when it’s paired with other strong and robust flavors.

Arugula is also an excellent vegetable wilted and paired with a strong variety of cheese and grilled steak slices. In fact, wilted arugula with other mixed greens and almost any grilled meat is a tasty and healthy meal. You can find hundreds of great recipes with arugula online.

How Can I Use Up A Lot Of Arugula?

A delicious pesto can be made with arugula, walnuts, olive oil, and garlic. The garlic highlights the arugula while the walnuts and olive oil complement and support it. You will need a significant amount of arugula to make pesto, so it’s of great use when your garden is overflowing.

If you’re making a traditional basil pesto and you don’t have enough basil, you can use arugula to make up for the missing basil. You’ll still have the basil flavor accented by the peppery flavor of arugula. 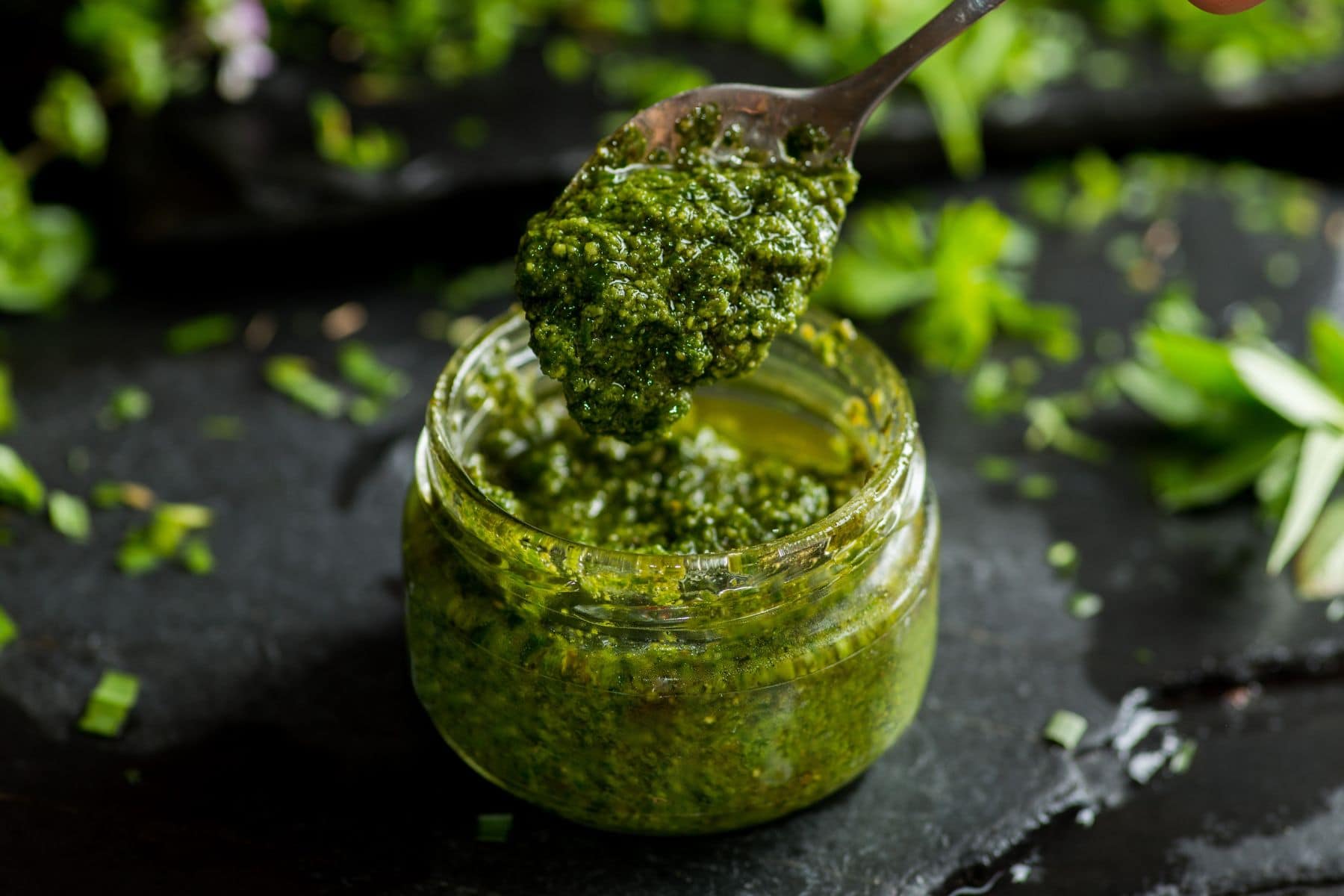 Use an arugula pesto on any pasta, meat or vegetable, or simply as a dip for veggies!

You can add arugula to almost any flavor of frittata. It adds lots of fiber and contains all the health benefits of leafy greens. Use plenty of strong flavors like tomatoes, herbs, hams, and cheeses like stilton or feta; arugula complements them all!

Although cooking does destroy some of the benefits of eating fresh food, the important thing to remember is that any healthy food, even cooked, is much better than eating no healthy food at all.

A 2020 study done on the effects of cooking on isothiocyanate (ITCs) showed that light cooking like steaming or stir-frying actually increased the amount of ITCs in the food while boiling or stewing decreased the ITCs by more than half.

So there is no problem cooking your arugula. Steaming or stir-frying is best, but even if you bake it in a quiche, you’ll still get significant health benefits.

In conclusion, now you know that you can substitute arugula for spinach in almost any recipe. It also has many health benefits like anti-inflammatory isothiocyanate (ITCs), and it’s low in oxalates and high in calcium, making it safe for certain groups. It makes a great addition to almost any meal!

For additional articles about leafy greens, read these other posts:

How Much Is A Bunch Of Spinach?

What Can I Use If I Don’t Have A Food Processor? [22 Alternatives]

Can You Microwave Tomatoes?

What Tomatoes are Best for Spaghetti Sauce?