Deciding where to store baked goods can be tricky sometimes. Do you want to make a batch of brownies but don't know whether they need to go directly into your refrigerator or if they are fine to sit out? Well, we've done our research and have the answer for you. Let's discuss.

Freshly baked brownies don't need to go into the fridge right after you bake them. Although you can do this, new brownies are safe to seal and keep out for up to a week after being baked, so refrigeration isn't required. Again, it's important to seal your brownies in an airtight container while they are out.

As we begin, we will cover all things brownies and tell you how to store them. Whether you're a new baker or need a new storage idea, we're here to help. With that said, let's jump right into this post! 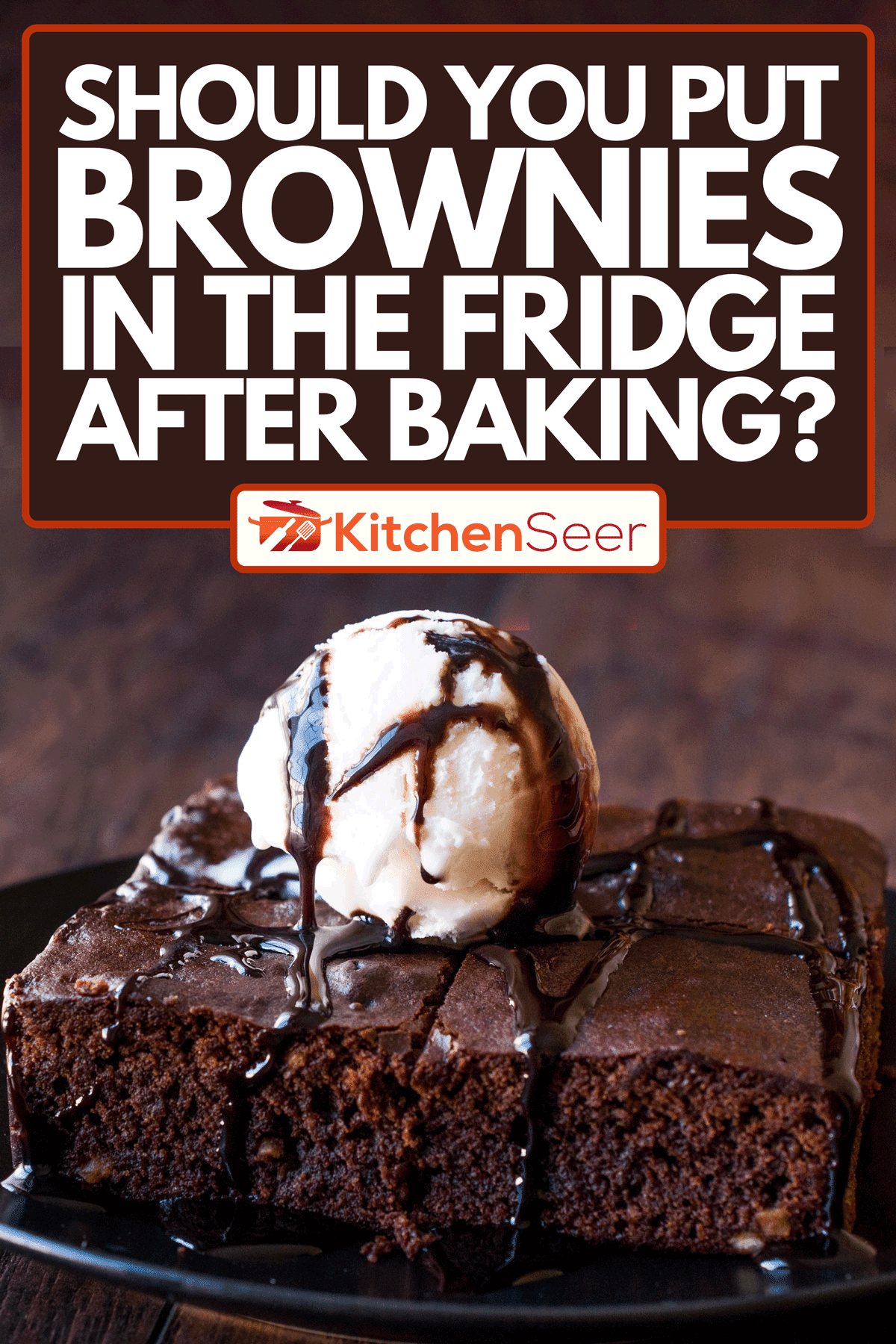 How Do You Store Brownies After Baking?

You want to keep brownies in an airtight container or bag after baking them. Whether you prefer Tupperware for your brownies or want to keep them in Ziploc bags, it's best to store baked goods out of the open air. Ideally, your brownies should go into vacuum-sealed packaging, as it will keep them fresher for longer. 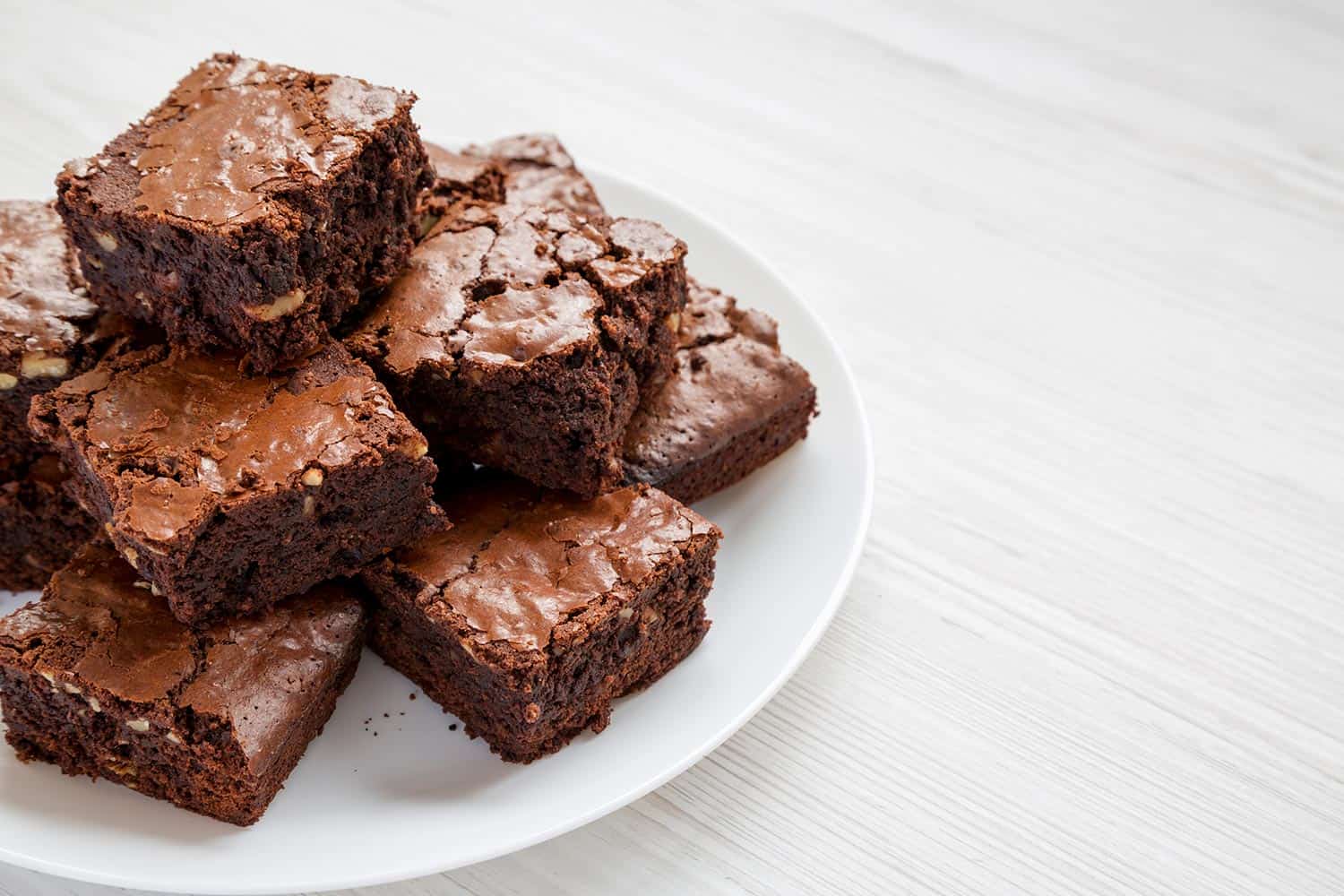 How Long Are Brownies Good For?

Expect fresh-baked brownies to keep their quality for about five to seven days. Although this can depend on how well you store them, brownies should taste fresh for about a week.

If you want to store your brownies for longer than five to seven days, we recommend wrapping them in plastic and placing them in your fridge. This will help maintain their consistency and flavor, although it isn't a long-term solution.

Like any food, brownies have a limited shelf life, so it's best to eat them sooner rather than later.

An easy way to tell if brownies are bad is to smell and inspect them. Expired brownies will have a strong odor and even develop mold, so take a good look/smell before eating your leftover dessert.

How Long Do Brownies Last At Room Temperature?

How Long Can Brownies Be Left Out?

You don't want to leave brownies out for more than a week. Even if you keep your home cool, brownies will need to go into the fridge after around seven days.

That said, baked goods will often start to harden if kept out on the counter for more than five days, so you may want to move yours into the refrigerator around that time. Of course, you can always try to eat your entire container of brownies before the seven-day mark, but we digress.

Can You Eat 2-Week-Old Brownies? 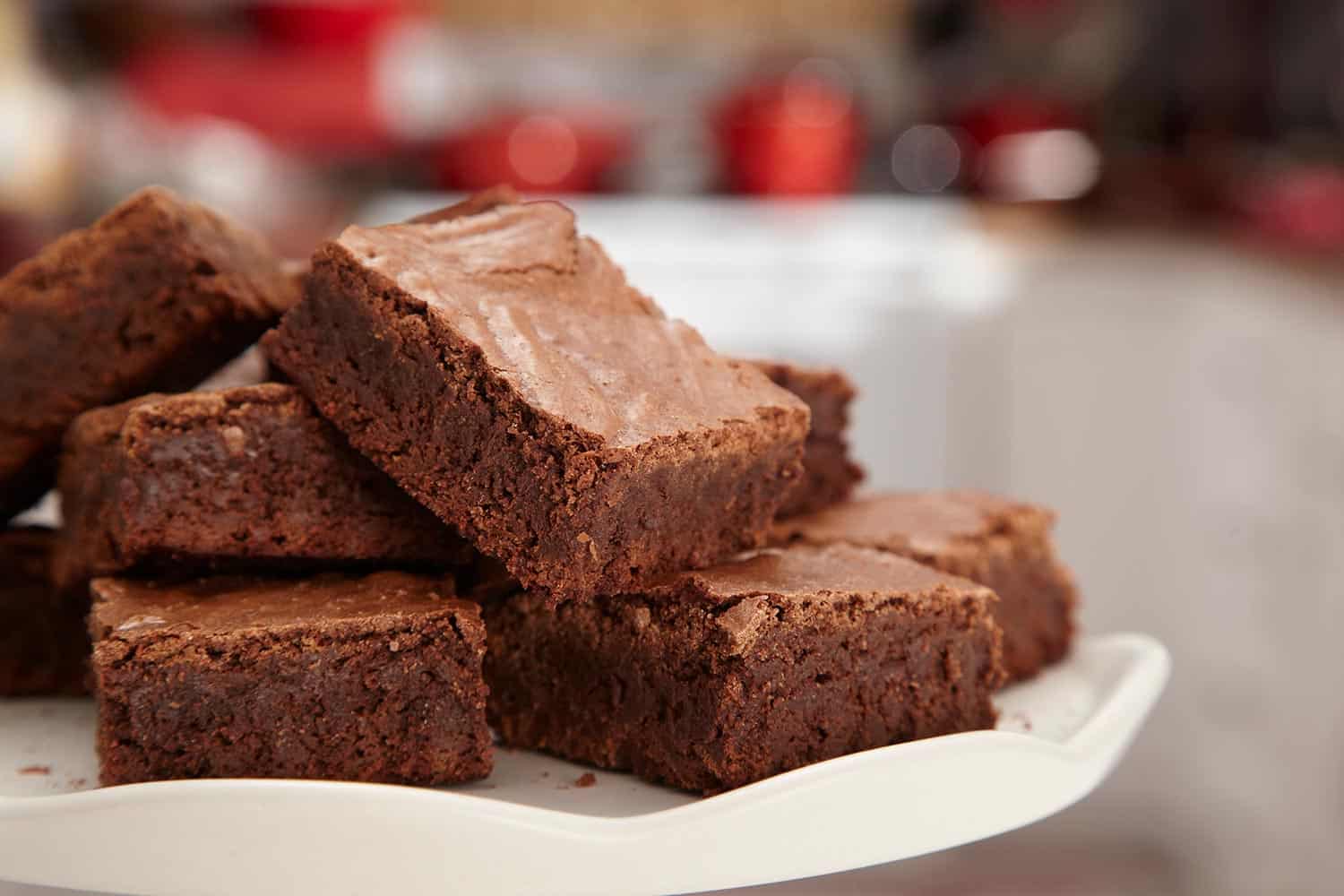 Even if you're tempted to eat two-week-old brownies, don't do it. Again, brownies and baked goods generally have a shelf life of around five to seven days, so it isn't a good idea to eat anything that has been around longer than that.

Brownies will also start to harden around day six or seven, so eating one that is two weeks old is only going to hurt your teeth.

Can You Leave Brownies Out Overnight?

As long as you cover them, you can leave brownies out overnight. In general, it's completely fine to keep brownies covered on the counter for a few days post-baking, so there's no need to worry.

On the other hand, we don't recommend leaving your brownies uncovered overnight, so try to use a container or airtight bag. Letting brownies sit in the open air can cause them to harden and lose their flavor, which nobody wants.

Should I Cover Fresh Brownies With Saran Wrap?

Yes, it's a very good idea to cover fresh brownies with saran wrap. Although it can be tedious, wrapping each brownie in saran wrap will ensure they stay fresh for a while.

Of course, you can always try using saran wrap over your entire pan or plate, although this does tend to let air onto your brownies, causing them to harden.

Can You Put Brownies In The Fridge To Cool? 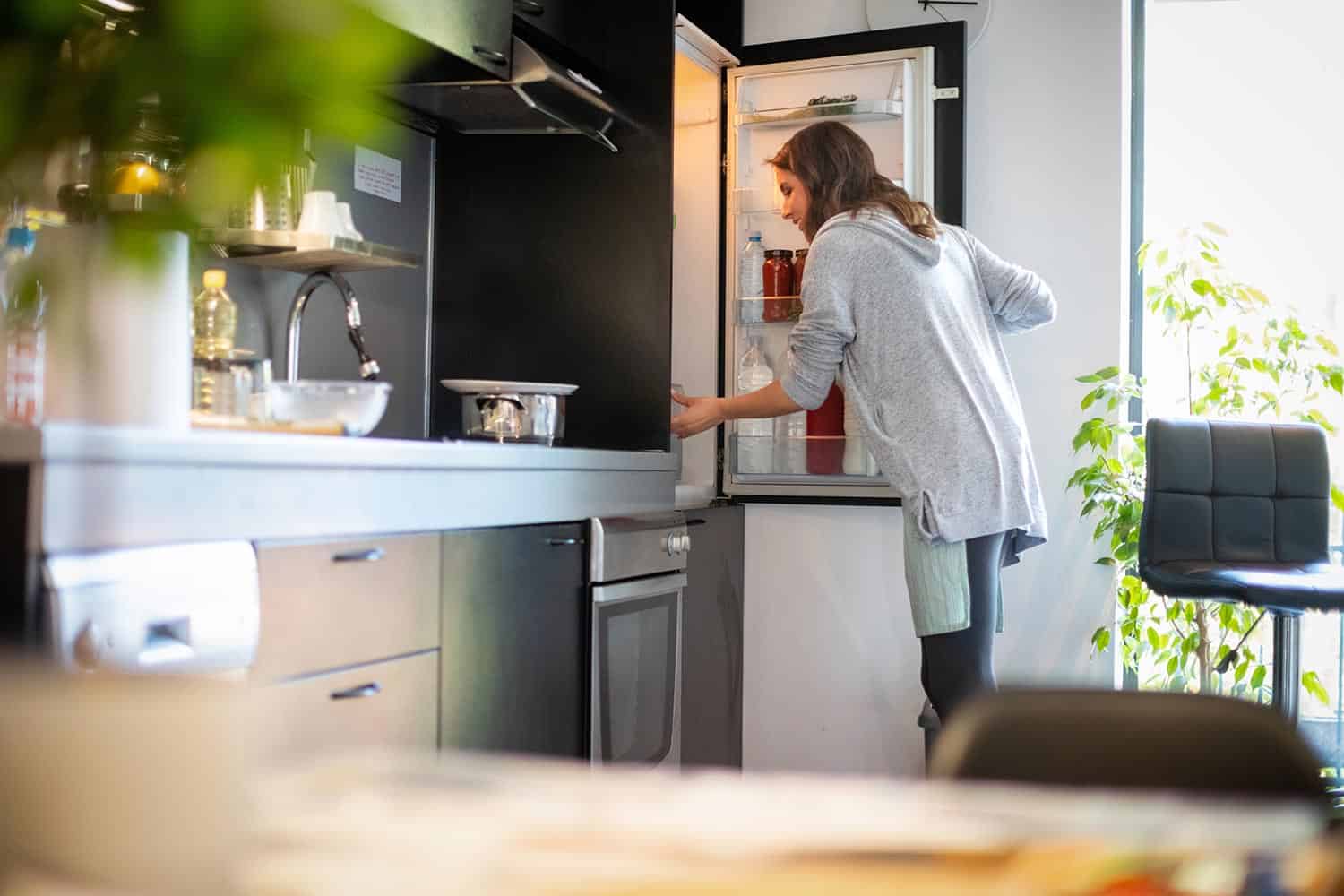 Yes, it's completely fine to put your brownies in the fridge to cool. Usually, you want to do this for about an hour post-baking, although 30 minutes will be sufficient.

Especially if you want soft, gooey brownies, placing yours into the refrigerator to cool after they come out of the oven is a great idea to try.

Will Brownies Lose Their Flavor In The Refrigerator?

Brownies shouldn't lose their flavor if you keep them in the fridge for a few days. Although they might taste slightly different, refrigerated brownies will keep their flavor and consistency for about five days.

Of course, you still want to wrap or cover the brownies in your fridge to avoid them hardening or losing their quality, so don't forget to do that.

Do Brownies Get Hard In The Fridge?

It is common for brownies to get hard in the refrigerator. Brownies harden because the colder temperatures inside a fridge can cause their sugar to crystalize, making them difficult to eat.

Leaving hard brownies out overnight is an easy way to soften them, so we recommend trying that method if you encounter this problem. That said, if it's been a week or so and your brownies are super hard, you're probably better off throwing them away than trying to save them.

How Do You Soften Refrigerated Brownies?

If your brownies are too hard after being in the refrigerator, you want to take them out and place them on your countertop. Let your brownies sit out overnight to soften a bit, and they should be ready to eat in the morning.

Of course, you still want to keep your brownies covered, so don't remove their wrapping/take them out of their container while they soften.

How Do You Keep Brownies Fresh? 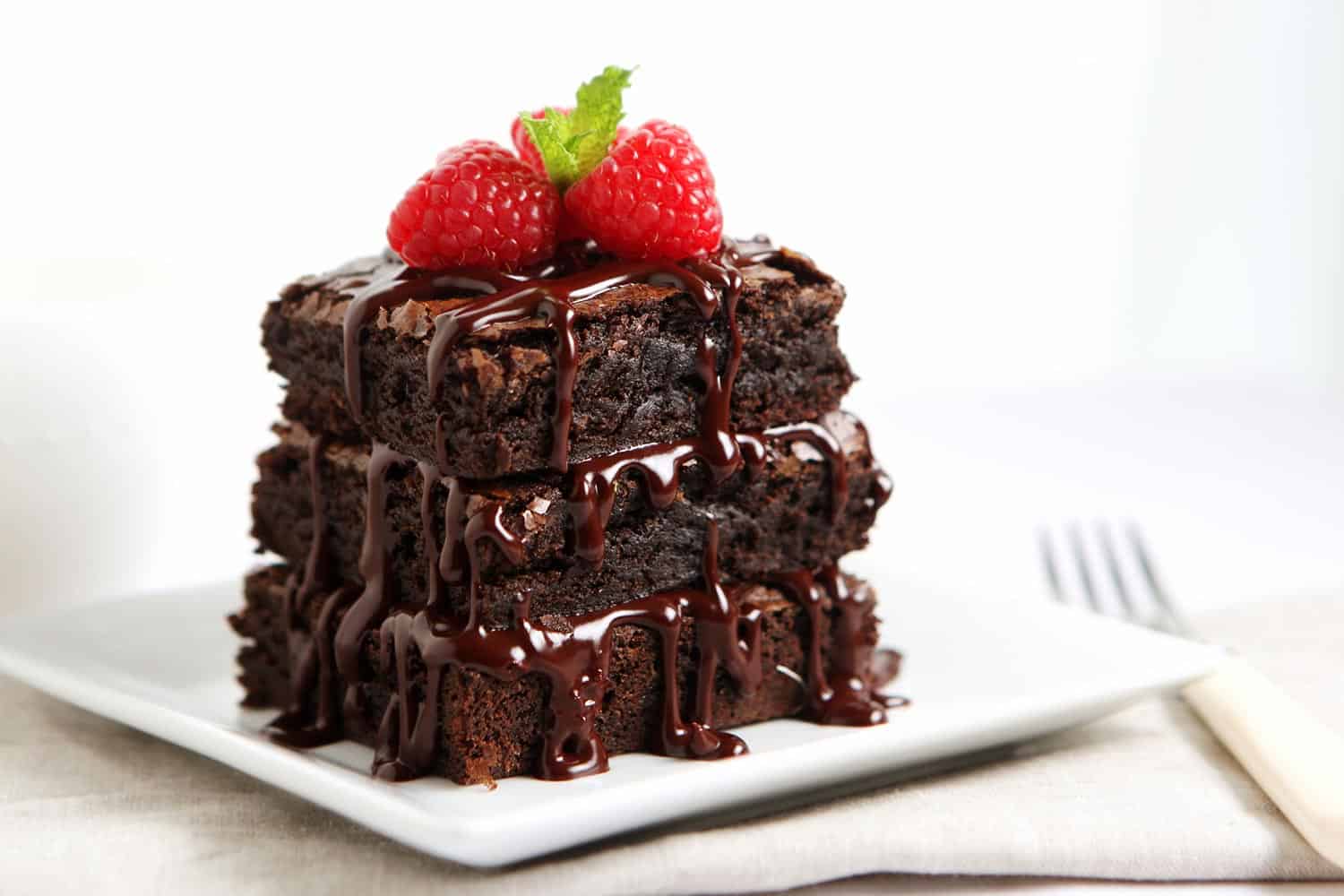 When it comes to keeping brownies fresh, this comes down to storage. Most importantly, you want to make sure your brownies are in an airtight container or bag between serving them.

You also want to keep fresh brownies at room temperature for the first few days, which helps preserve their consistency and flavor. We recommend refrigerating brownies past the five-day mark, although they might lose some of their initial taste/quality.

When Is The Best Time To Eat Fresh Brownies?

Brownies will usually taste their best the first one to two days after you bake them. Although the difference may be slight, brownies will start to lose their flavor the longer you let them sit out.

Even well-covered brownies might start to lose their quality after around five days, so we recommend eating yours sooner than later. Again, every pastry will be different, but don't hold out more than a week for brownies.

Should You Freeze Brownies?

If you plan on storing your brownies for more than a week, freezing is a good option. Most times, brownies will stay good for around three months in the freezer and shouldn't lose their taste or quality once reheated.

One thing to note—you want to make sure to wrap your brownies well so they don't end up with freezer burn, which will affect their flavor.

What Is The Best Way To Freeze Brownies?

It's usually the best idea to wrap your brownies in plastic and then cover them in foil when freezing. Double wrapping your baked goods will keep them fresh while preventing flavor and consistency loss.

Double or even triple wrapping brownies will also extend their shelf life in the freezer, so the more protection, the better.

Whether you love to bake or want to get into it, knowing how to store your pastries can be challenging. You don't need to refrigerate fresh brownies, but you do need to cover them.

It's essential to wrap or store your brownies in airtight packaging to prevent them from hardening or going bad. You also want to place your brownies in the fridge once the one-week mark hits, although it's best to eat brownies within the first few days.

Regardless, remember to store your brownies well, and don't be afraid to freeze yours if you want to keep them for a few months.

Before you go, be sure to check out these helpful related posts below!

Should You Reduce Oven Temp When Baking In Glass?

Can You Bake A Cake Or Brownies In A Lasagna Pan?

When Should You Cut Brownies After Baking?

What’s The Difference Between Quiche And Tart?

How Long Should You Bake Chicken Legs And At What Temperature?