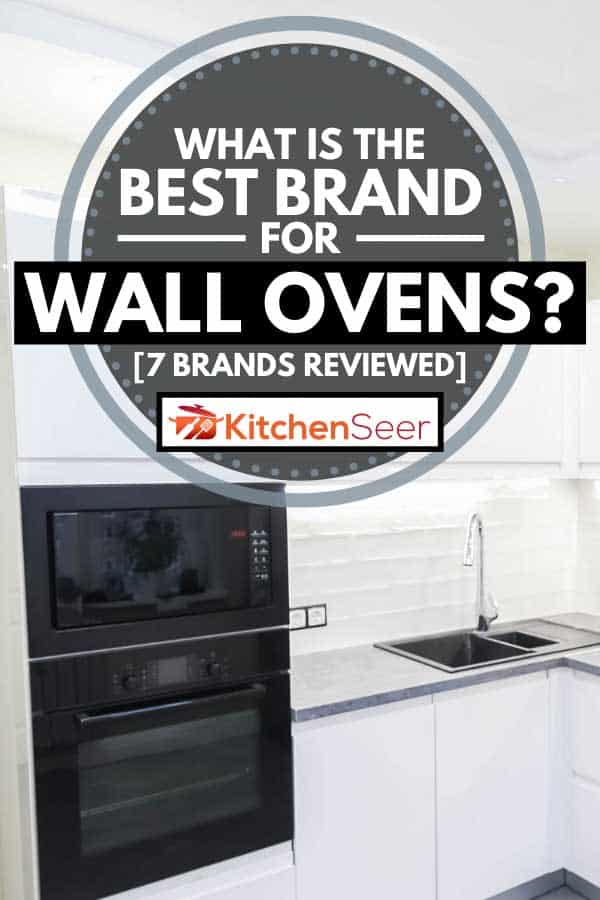 Is there a best brand for wall ovens? Many kitchens are now equipped with a wall oven and a simple stovetop at counter height. The wall oven is easier for loading and unloading and allows you to see your food cooking without having to bend over. It also takes up a little less space than a traditional oven. But which one should you buy? We researched all the brands of ovens to find out which ones were the best!

We're going to look a bit more in-depth at each brand, its history, and some frequently asked questions about their wall ovens.

The KitchenAid brand was started in 1919 when they introduced the H-5 Stand Mixer. In 1937, the mixer got upgraded to the Model K, which looks a whole lot like today's KitchenAid Mixer. In 1949 they launched their first in-home dishwasher. In 1986 the company acquired the Chambers Corporation of Oxford, MS, which allowed it to start manufacturing full suites of kitchen appliances. In 2019, KitchenAid celebrated its 100th anniversary.

Today they have over 40 different variations of wall ovens, including ovens equipped with smart technology. The cost range is from just under $2000 up to about $5000, depending on the features you may choose. Many people think that KitchenAid is one of the best brands available on the market today.

GE, or General Electric, was founded by none other than Thomas Alva Edison. He started the company in the late 1800s as a research lab, which is where he created the first incandescent lamp. In 1892 he merged with the Thompson-Houston company to start what we know today as GE. 1907 is when GE saw the first line of heating and cooking devices come into production.

Today, the company has over 70 variations of wall ovens, with the price range being between $1500-$4500. Many of the major home improvement stores sell GE brand appliances, so they are easy to purchase. They are often ranked near the top of best wall oven lists.

LG Electronics is a Korean company that came about after the merger of Lucky Chemical, LS Cable, and GoldStar. It was started after the Korean War in the late 1950s to help rebuild households with commonly used appliances and electronics. In 2014 LG started its line of smart appliances where consumers can use a mobile messenger app to control their home appliances even if they're not home.

LG has 12 different models of wall ovens ranging in price from just under $2000 up to $3500. Some of their lower-priced models have rankings near 5 out of 5 stars.

Samsung is another Korea-based electronics and appliance company. It produces about 1/5 of Korea's exports of home appliances and other small electronics. Founded in 1938, it was originally a grocery store trading company. After the Korean War, the company expanded into textiles, and in the 70's it started rapid expansion into other technologies.

Currently, Samsung has 12 different wall oven varieties, including an oven and microwave combination. Prices for these ovens range from as low as $900 (on sale) to as high as $5000. They blend seamlessly into your cabinetry, and some features use smart technology that you can control from your phone.

Robert Bosch started his engineering and innovations firm in 1886 in Stuttgart, Germany. By 1929 the firm had over 10.000 employees, and by 1933, they had introduced their first home appliance: a small electric refrigerator. The first washing machine came in 1958 and the first dishwasher in 1964. The 1970s saw Bosch's first microwave oven. Now the company is known for high-quality and high-reliability appliances with cutting edge technology.

Bosch offers single, double, combination, steam, and speed (convection) built-in wall ovens. There are over 35 different models that range in price from just over $1500 up to just over $6000. They are sleek and beautiful for a modern kitchen. Best Buy customer reviews rate some Bosch models at almost five solid stars out of 5.

Frigidaire is an American company that started in 1918 in Fort Wayne, Indiana, by William C Durant. Its current headquarters is in Charlotte, North Carolina. It started out making refrigerators, and the brand name was so synonymous with the appliance that many refrigerators were called 'frigidaires' regardless of their brand and maker. Most of their ovens are currently made at a plant in Tennessee.

Currently, they make 18 different types of wall oven, including single, double, and microwave combination ovens. Prices range from about $1500 to $3500 dependent upon type and features. Because Frigidaire is American made and has been around for so long, many people remain brand loyal to them and buy a new Frigidaire when an older model needs replacing.

Miele is another German company that began in 1899. They adhere to the principle of "Immer Besser," which means "forever better" than their competitors and as a company. When you buy a Miele, they want you to know that the "Immer Besser" principle means you have made the better decision. They put any new appliance through a strict endurance and stress test before introducing it to the market, thus winning praise from many German watchdog consumer groups.

Miele is a higher-end brand, with over 20 variations of ovens. The lowest price versions are slightly over $2000, with the highest-end models reaching nearly $10000. Clear touch displays, wireless temperature probe technology, and moisture plus features make these ovens a real standout for the home kitchen.

What Should I Look For When Buying A Wall Oven?

First, you want to look at the size. Are you replacing an existing oven? Wall ovens typically come in standard widths of 24, 27, and 30-inch widths. You want to make sure your opening accommodates one of these sizes.

Second, you want to think about cooking space. Depending on how much and what you cook, you may want to consider whether you want a double or single oven. Wall ovens tend to have slightly less interior cooking space than standard ovens, so a second oven may come in handy if you do a lot of cooking.

You must also consider if you need an electric or gas oven. Do you want it to be self-cleaning? Self-cleaning ovens typically will add about $300 to the overall cost, and you need to decide if that's worth it to you.

Then it's down to features. Do you want a smart appliance that you can control with your phone? Do you want touch-screen technology? Do you want a Sabbath feature that automatically shuts off your oven if you observe the Sabbath? All of these extras can affect the overall budget.

What Is The Most Reliable Oven Brand?

In 2019, KitchenAid was named the most reliable oven brand. Between fantastic functionality and customer satisfaction, this popular brand ranks at the top. Of our other listed brands, Samsung, Frigidaire, and Bosch all make lists for reliability. One thing to consider is the availability of service people to fix these brands in your area. And as always, sometimes you just get lucky and have an appliance that never lets you down.

Wall ovens have been around for a while and excellent reasons. They're convenient and make handling heavy and hot dishes so much easier. They take up less space and are safe if you have small children who you don't want touching the front or opening the door of a hot oven. Any of these brands will provide you with a piece of equipment you'll be smiling about from the first baked cake.

For more great KitchenSeer posts, please check out these below:

How Much Does a Double Oven Cost?

Where To Place A Refrigerator In A Kitchen [3 Crucial Considerations]

Can You Use Oven Cleaner On A Stove Top?

Are Glass Containers Oven Safe? [Here’s How To Tell]

11 Things To Have On Your Kitchen Counters